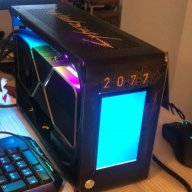 I thought I would post my first real SFF build. My first ever built was the Kickstarter Dan A4, where I was simply happy to be able to create a computer that actually worked. This time, I wanted to build a high-end machine that also looks the part. First, I must make a concession as, technically, the build is not complete as I am waiting on one custom side panel, but panel aside everything is in place. Big shout out to everyone who has provided advice for me on here over the last few months. This log will primarily focus on the custom/mods that I have done, as there are many posts on here about who to build this type of system, by posters who are far more experienced than me.

During the first lockdown in London, I found myself without my usual vices outside of work. Knowing that Cyberpunk was due to come out this year (after having first heard about this game when I was still at university), I thought that this would be a good idea to upgrade my pc, although at the time of purchasing the initial components, I was not sure if I would focus my build around Cyberpunk. After watching too many Optimum Tech and Dietec videos, I decided to go for another SFF build. I have followed the Dan A4 since the Kickstarter days and so that was an obvious choice, although this time I opted for the Silver A4.1. I remember how much of a nightmare cable management was for the Dan A4 so, naturally, I decided that the Asetek 92mm AIO was the way forward. Without boring you with the thought process this was going to be a high end build on with a Cyberpunk design, focussed on the RTX 3080 (when released) with a slightly lower CPU to be upgraded to 11th Gen next year.

Long story short, I decided that I was going to spray paint the case and mod the components as I could. The scariest part of the build was the decision to cut a hole in the front panel of the case and to also make a smaller cut into the frame itself. After deliberating this decision for around 2 weeks and measuring, remeasuring, marking, calculation and then remeasuring (again) the internal monitor, I decided to take the plunge and cut up the case (sorry Dan). I used a drill to punch a hole and then worked a fine saw blade by hand to cut out the area I had calculated. Note to anyone who is tempted to cut the frame of the Dan A4 – remove the plastic sheet fist. Would have been a whole heap easier. After having butchered the lovely case and sanded down the edges, I was pretty confident that the monitor would fit into the hole I had cut. I was also 85% confident that there was categorically no change that my hand measurements and DIY approach would actually mean that I would actually be able to mount this correctly or that it would work (Spoiler, somehow it worked perfectly) – the harder bit was ensuring that the power and HDMI cables would not impede either the PSU or the (not yet released) 3080 and that nothing would impede the “on switch”. Not going to lie, I lucked out a bit with that – as accurate and precise as my measurements were, this was all done by hand.

I used the CAD template for the side panels from Dan’s website and created the design on CAD for the side panel that you can see in the photos below. I effectively taught myself CAD but did receive help on this from a student interior designer who knew how to (and had) the software. This took a long time. I got this laser cut onto 3mm clear acrylic. The “frosted” border has been created by using a frosting spray on the clear acrylic.

For the paint job, I used the Rust Oleum yellow primer as a base coat and then used a yellow paint (all Rust Oleum). I then used the “Cyberpunk 2077” from the laser cut acrylic sheet to use as a “stencil” and then sprayed the case black (yes, I am well aware I could have got a black case. Hindsight….), when I took the stencils off, I touched up the top of it by hand to clean up the pattern. The “cracking” texture that spreads over the case was not by design, but I am 100% grateful that it occurred as I think it adds a lot to the case. The AIO has been modified to have the yellow tubing that you can see in the photo.

As with any Dan A4 build, the hardest part of the build is trying to configure the wiring. The PSU cables from Pslate Customs was a lifesaver and I 100% do not have the skills to have used the stock cables. The ribbon HDMI cable and 90-degree micro UCB cable for the internal monitor just about fit in the front panel (obviously, there is no option to have any SSD there as well). It is possible that there is a very slight (less than 1mm) camber of the front panel, but this may have been done when I was cutting it up. Due to the HDMI ribbon cable being made primarily for a drone, I could not source one that was long enough, hence I have a more conventional HDMI connecting to this and the GPU. Trying to fit the PSU was nigh on impossible and to this day, I am sure I fluked it. The internal monitor looks great, but I do keep losing my cursor on that screen (I have it set up on a diagonal display) and my dismay when seeing the power required for the 10600k and the 3080 (and then further dismay when discovering that the FE was one of the only 3080s that would fit in the case and then seeing its “I am going to design a cooler that couldn’t make it more unfriendly for a sandwich case”) really made me consider packing it all in and buying a mid-tower. However, I am extremely glad I persevered as I love the finished product. I had to install the 5000RPM fans above the M.2 which decreased thermals of the M.2 from 95 degrees + to 60-65, which was a lifesaver. I am not sure if the one above the 3080 actually does anything, but it appears to make some difference. As you can guess, this is a hot built and the case is warm to touch. It is a bit noisy but actually not as bad as I was expecting. As mentioned, I am waiting on the GPU side panel, but this will just be frosted acrylic with a cut out to show the entire 3080 (thus far). The RGB lighting works with Asus aura Sync and again was a nightmare to install in a way whereby as few cables/LEDs would be visible.

That being said, I am very very happy with what I achieved and now just need the game to come out.

Before I post the pictures, I receive the “USB device over current status detected” error if I try to plug in the front USB-C connector into the Mobo. After a few attempts to fix, I gave up – I believe that I may have damaged something when cutting into the case – However, if anyone has any potential fix, I would be very much obliged.


Let me know if you want to know anything further about this build. Photos below.


Photos (sorry if they are not great quality)