While wandering the floors of Computex this sharp-looking Mini-ITX case immediately caught my eye, especially when I saw whose booth it was in. 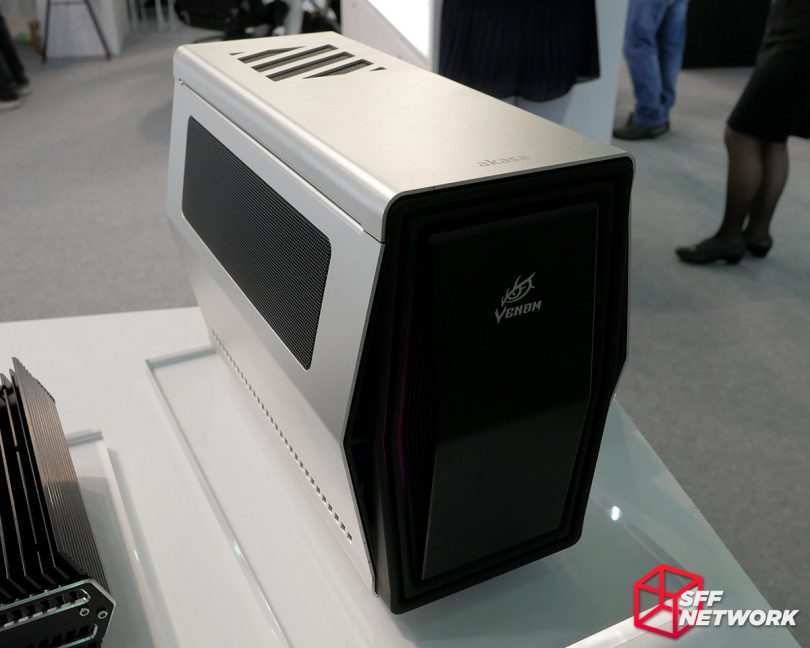 This is the prototype Venom RG case from Akasa. While Akasa has the Venom line of gaming products, most of their cases though are aimed at the industrial market so I was quite surprised to see this premium-looking Mini-ITX case from them.

The exterior design is very clean, with thick silver aluminum panels and a steel frame. In fact, the front is so clean that there isn’t even any front IO present, including the power button! 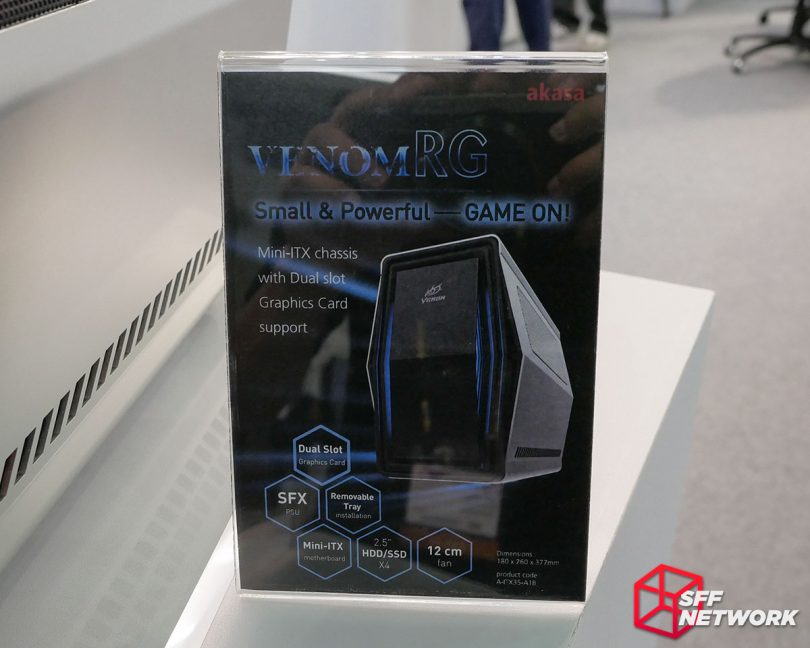 According to the sign here, the Venom RG (A-ITX35-A1B) measures in at 260mm x 180mm x 377mm (HxWxD) for a volume of 17.6L. While not the trimmest Mini-ITX case around, it’s still a respectably compact case considering it’s Akasa’s first entry into the enthusiast SFF case market, unlike some other debut ITX cases *cough* Manta *cough*.

Specs include support for a dual-slot GPU, SFX PSU (more on that later), 4x 2.5″ drives, 120mm fan, and a removable motherboard tray. 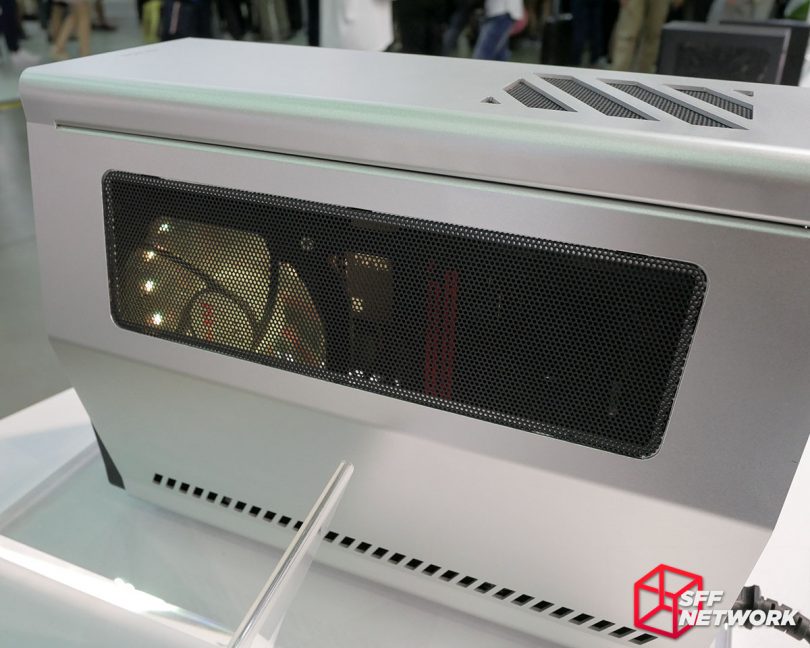 Through the mesh on the right side panel the 120mm fan is visible as well as the motherboard, which it looks like someone forgot to install the RAM in. Unfortunately Akasa wouldn’t let us take the case apart, but I suspect that 120mm fan mount can also be used for an AIO water cooler. Or at least I would hope so considering this case is a bit on the large side. 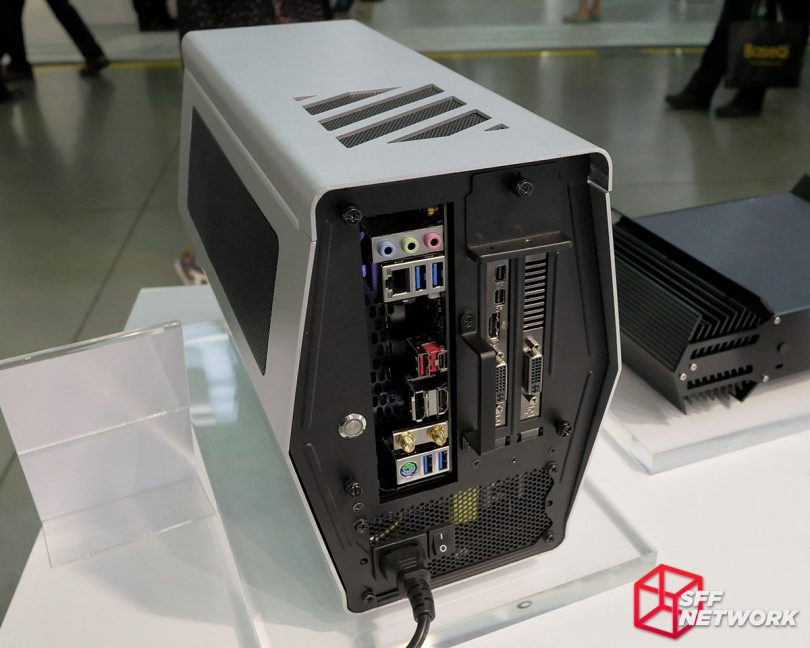 Ah, there’s the power switch! Amusingly it’s an anti-vandal switch like those often used by our forum members for their custom case projects due to their availability, looks, and functionality. They are a bit on the expensive side though for a mass-produced case, and I would be surprised to still see it on retail units.

Anyway, the case uses a PCIe extender of some sort to reposition the video card back-to-back with the motherboard, and the SFX power supply is located at the bottom of the case underneath them. I’m not sure what Akasa is doing with the space at the bottom of the case in front of the PSU though, because I would think there should be room for 2x 3.5″ drive mounts down there, but instead they are only advertising support 4x 2.5″ drives.

But given the presence of the handle and the touted removable motherboard tray, my guess is the four thumbscrews can be undone and the rear frame panel with tray attached slides out from the rest of the frame and exterior panels. If that actually works well in practice it should make working with this case quite simple. 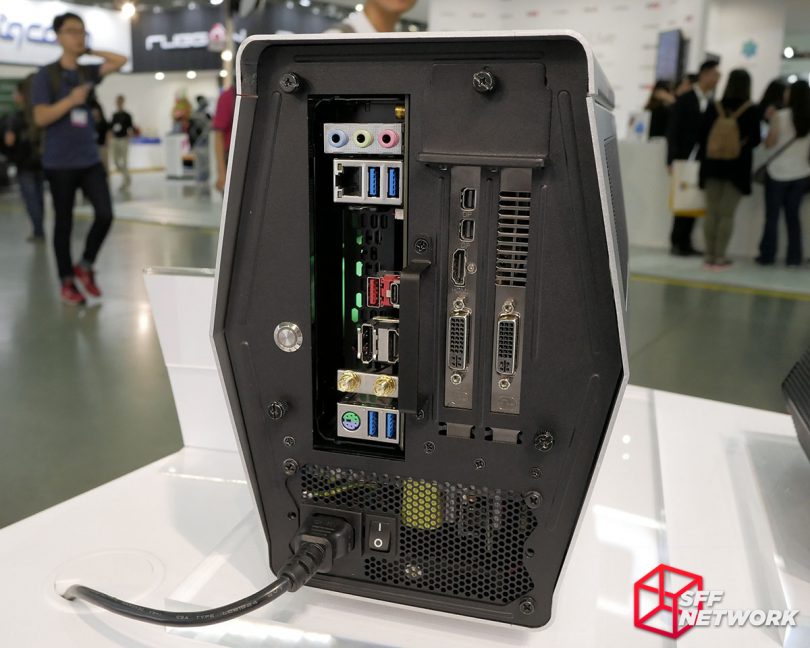 This is just a prototype and as such the design and features are subject to change, but I imagine this is close to what will ship since the rep I spoke with said they expect to release this in Q3 or Q4 this year. No word on price though.

As I mentioned, Akasa mainly does industrial/enterprise cases and they had no shortage of them at the booth. 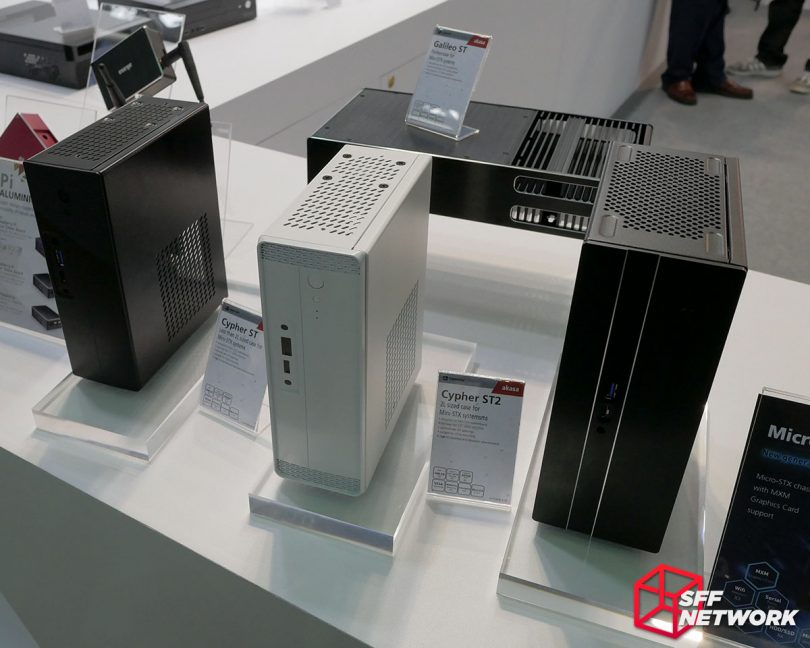 On the right is a Micro-STX case that looks suspiciously like the chassis used on latest iteration of the ASRock DeskMini GTX/RX barebones systems. So I guess Akasa must be the OEM. 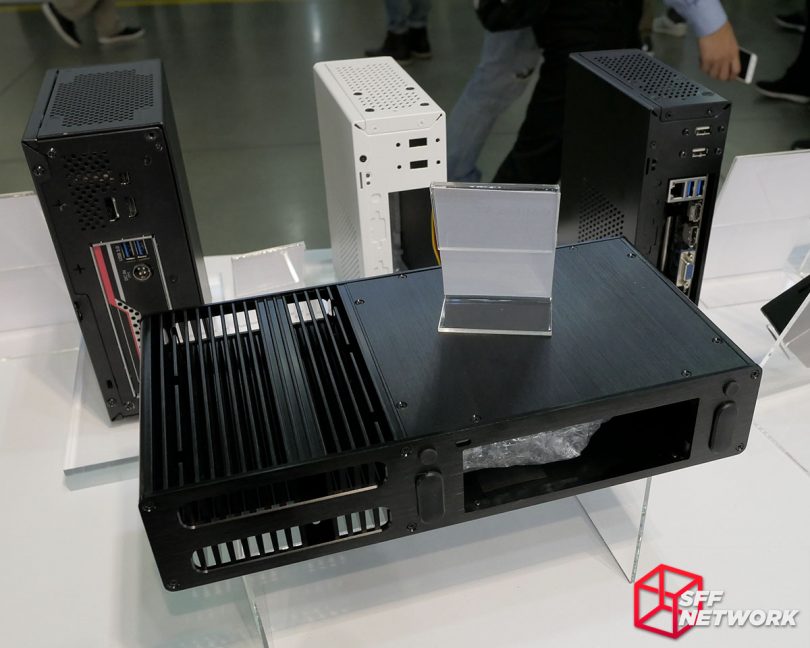 And this odd-looking case is the Galileo ST, a fanless Mini-STX case. The aluminum fin array is to dissipate the heat, and I assume the CPU is connected to it via a heatpipe system like the Thin Mini-ITX Galileo.

Akasa also had a SFX and SFX-L unit on display, and conveniently enough their new case requires SFX/SFX-L. Looks like someone at Akasa has taken a course on product synergy! 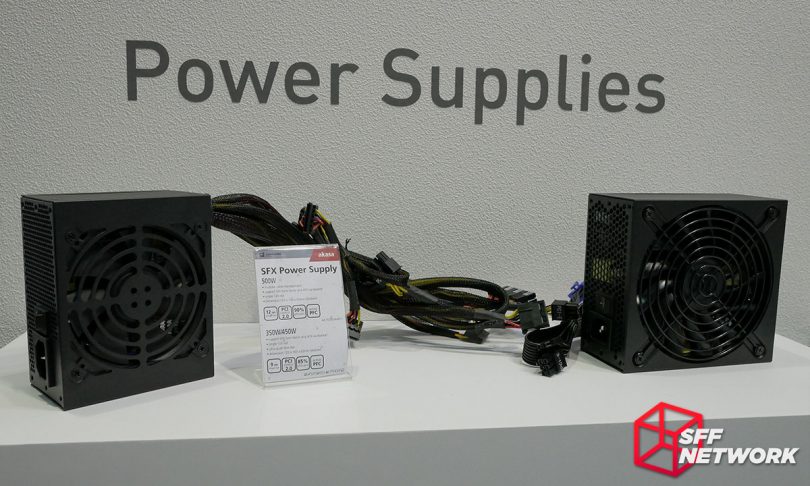 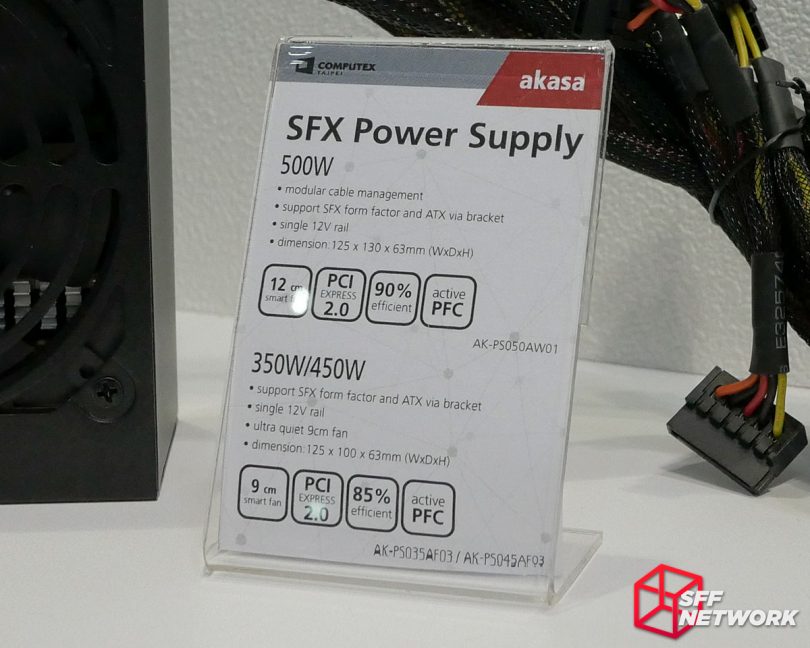 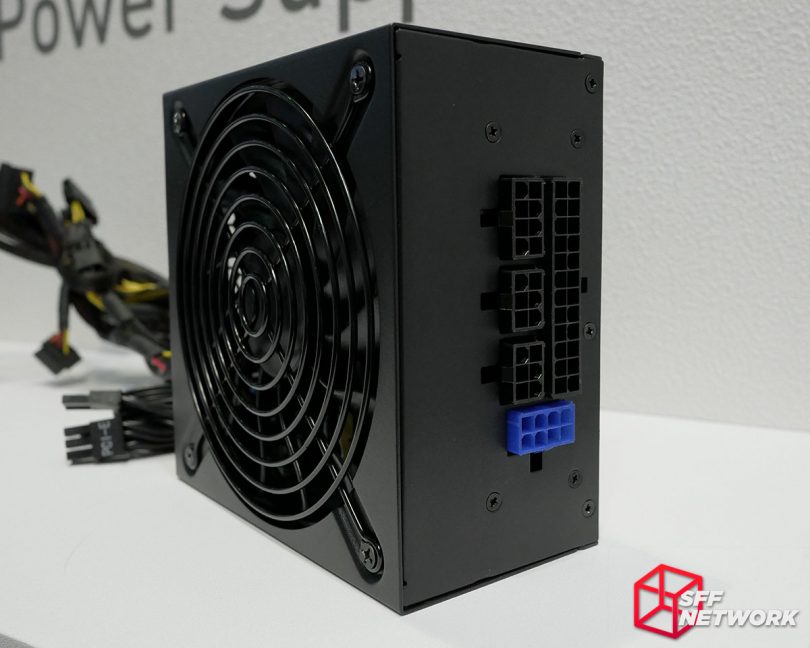 As evidenced by the distinct lack of wires and the presence of connectors, I can declare that the SFX-L is indeed fully modular. 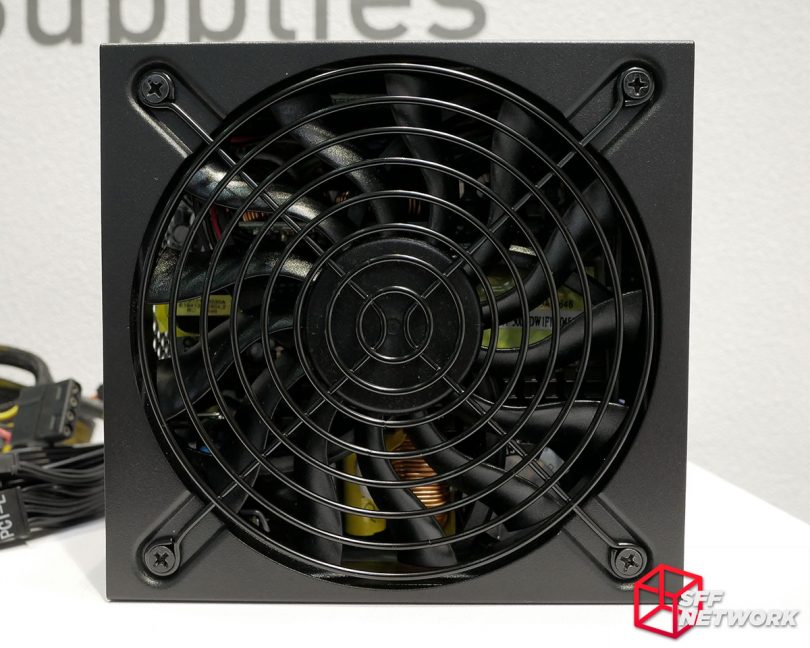 As I expected, the SFX-L is using the venerable Sirfa platform seen on most of the 500W SFX-L units from other brands. While it’s been eclipsed by newer platforms, it’s still a solid design that is plenty suitable for a mid-range SFX-L unit. 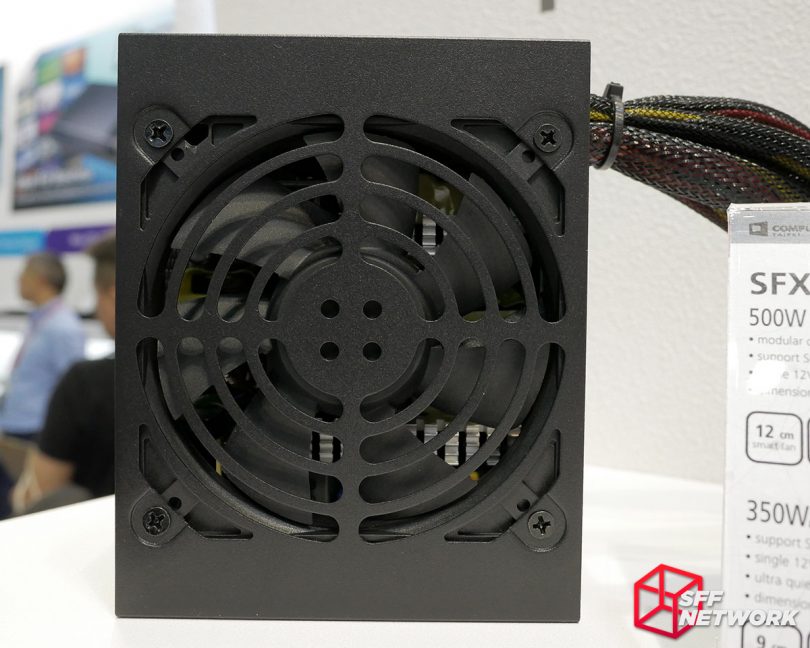 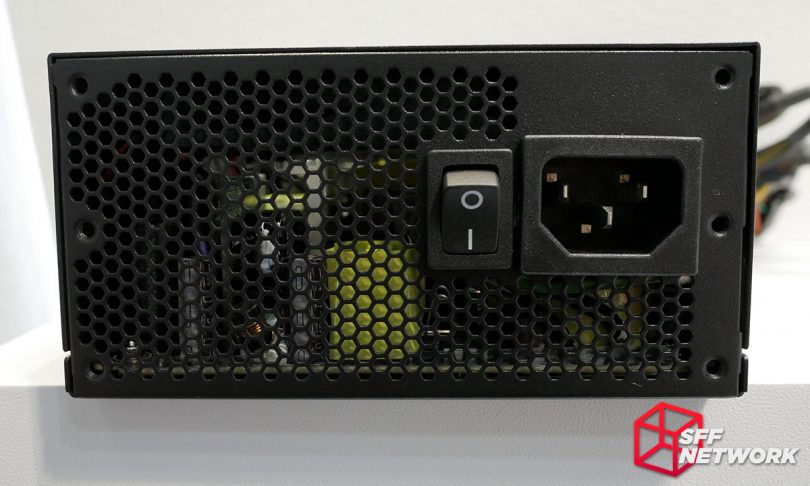 The Akasa SFX is also from Sirfa/High Power, this time using the same platform as the SilverStone ST30SF V2.0 and ST45SF V3.0, or at least the 450W for sure since that’s the unit pictured. I would think that the 300W is the same however. 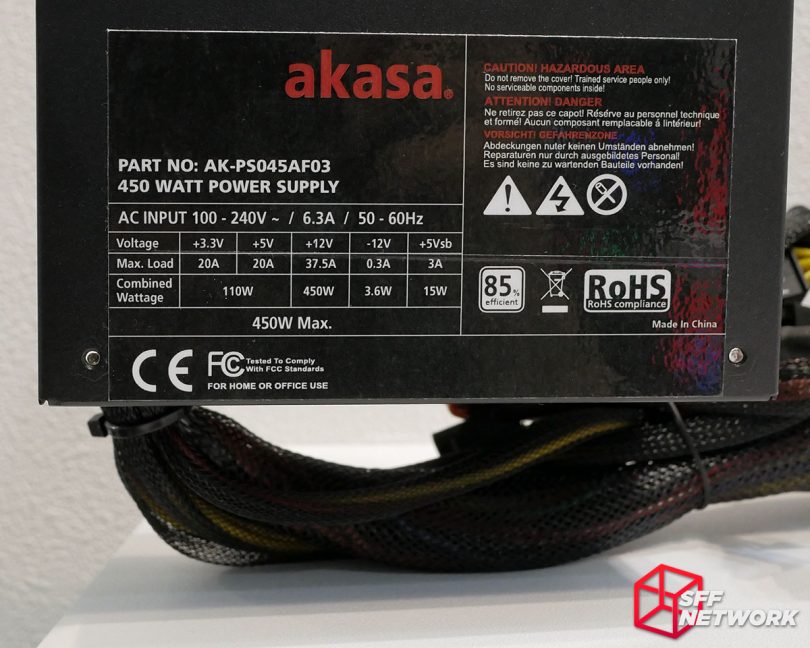 Weirdly Akasa doesn’t seem to have a 80 PLUS certification and is labeling it as “85% efficient”, which would correspond to Bronze. I’m not sure if this is just temporary until testing is complete or if they intend to sell it like that. The 500W is the same way but with a “90% efficient” label for the equivalent of Gold.

I misplaced my notes for these units, but presumably they will release in a similar timeframe to the Venom RG to get that sweet, sweet synergy. 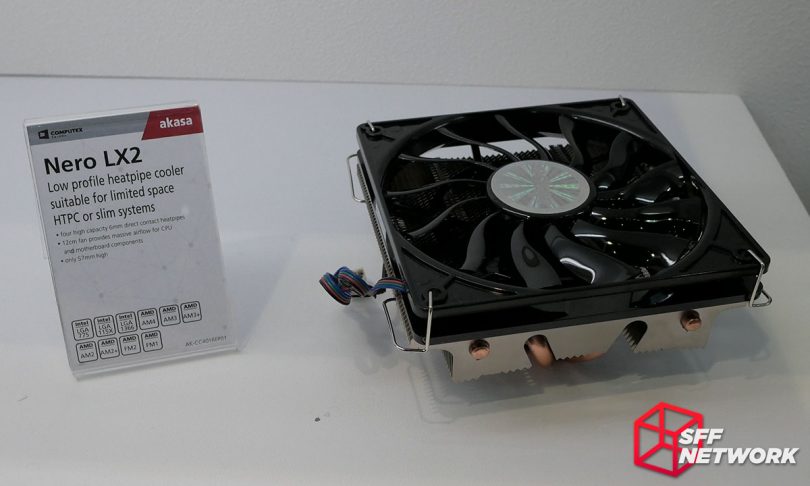 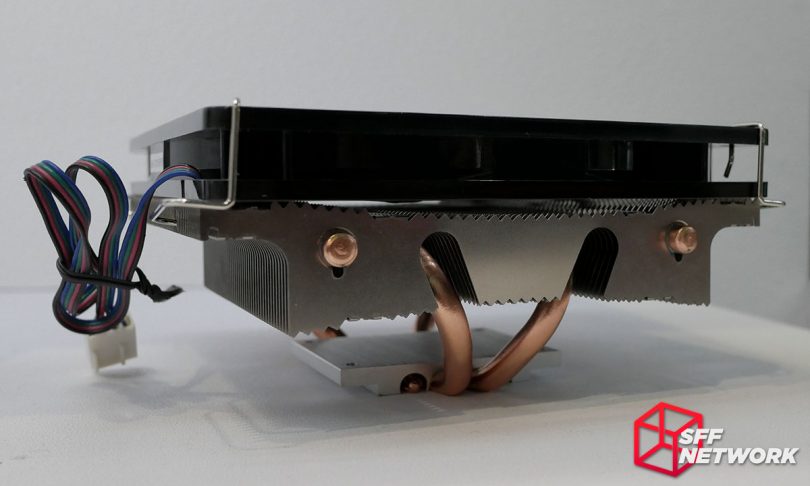 As far as I can tell the only difference between this and the previous Nero LX is a different fan. The heatsink itself appears identical. 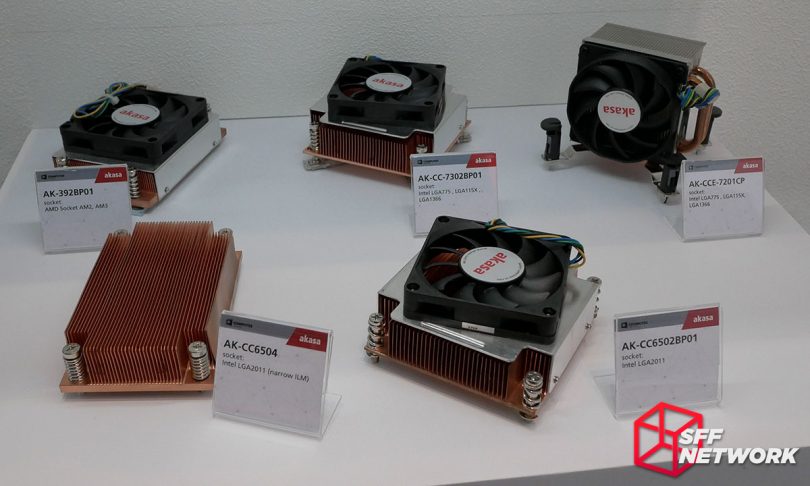 A selection of Akasa’s range of server coolers.

Akasa had many more cases, but they were mostly for the industrial/enterprise market and we had lots of floor to cover and not enough time so that wraps up our look at Akasa’s Computex 2017 booth!