One of the major issues we come across when building our Small Form Factor systems is cooling. There just never seems to be enough space to cool our systems efficiently and quietly without investing major effort, or considerable expense.

With proper design and creativity, however, good cooling can be had. And it was with this goal in mind that I was very intrigued upon re-discovering SlipperySkip’s ‘Ayr’ passive cooled SFF HTPC.

SlipperySkip’s all-wood build was based around a Gigabyte Z77N-Wifi M-ITX motherboard, an Intel Core i3-3225, a 150w Pico-PSU and a Silverstone Heligon HE02. The CPU choice here is important, as passive cooling is reliant on low wattages and big heatsinks – the i3-3225 is a 55w processor, after all.

Under 3DMark 11, the system attained a maximum temperature of 58 degrees Celsius – far below the Tj Max of the Intel CPU. 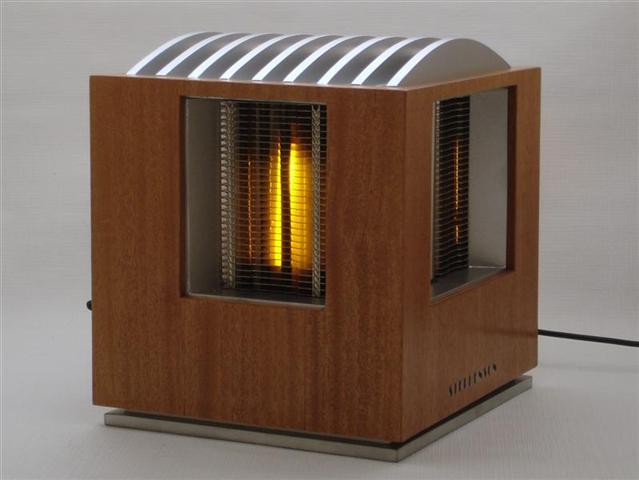 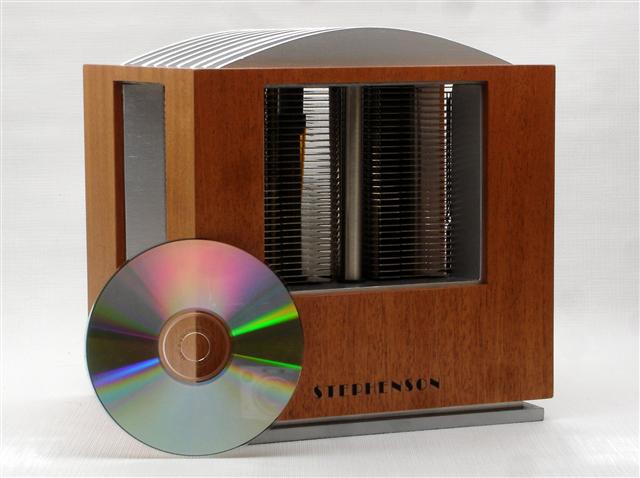 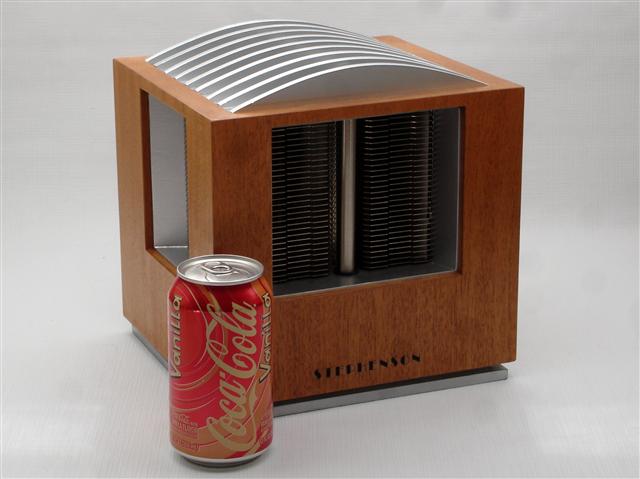 As you can see, the cooler is mounted so that the fins are horizontal – will that make a difference to cooling?

Passive cooling relies on a thermodynamic property known as convection. Heat is transferred from a heatsink to the air surrounding it, due to energy’s desire to reach equilibrium. As is the case with fluids such as water (air behaving similarly), the density of air decreases as its temperature rises. Furthermore, lower density air rises as cooler, higher density air sinks down, forcing it upward. From afar, then, you can envision a cycle where a heatsink warms the surrounding air, encouraging it to rise, and for cooler air to sink back down, re-enveloping the cooler. This fresh air is then itself heated, and the cycle repeats; what you have is airflow encouraged not by the mechanics of a fan, but through the physical interaction of air pockets of different densities. Although that flow isn’t nearly as strong as even the smallest and slowest spinning of fans, it is sufficient to remove small amounts of heat.

As such, optimal heatsinks for passive cooling are large, preferably dark in color, and usually have a means of transferring heat uniformly throughout the unit. And this is where massive, heatpiped, coolers come into their own, for the heatpipes in such coolers have two factors which assist in passive cooling: large, dense fin arrays, and relatively efficient heat distribution amongst the array.

For effective heat transfer from heatsink to air, a large surface area is also needed, with sufficient gaps in between the fins and heatpipes for air to freely flow. This is why CPU heatsinks marketed as “quiet coolers” are generally very large, and have larger gaps between the fins than their smaller counterparts – since they can’t rely on a loud fan pushing air through, they have to design towards the physics of the movement of air, and other thermodynamic concerns.

Case choice, of course, also has a substantial impact. The traditional PC chassis, replete with front intake and rear exhaust, will not work as effectively if true fanless performance is desired. A bottom intake, top exhaust layout is a generally preferred layout here, with vents as open as possible (high density fan grilles and filters will impede air movement, which is particularly debilitating to passive cooling).

To see what I could achieve with passive cooling, I threw together the SFFn thermal testing rig (detailed here) and grabbed the largest heatsink I have in stock – the Scythe Ninja 4. Without fans this cooler weighs in at 780g, so it definitely qualifies as large. And, with 6 heatpipes and a very large quantity of spaced aluminium fins, it’s no wonder that the unit is amongst the best aircoolers on the market, when used with fans.

The question here is: does it also make an effective passive cooler?

As I wanted to get as much data as possible, I tested the system in three orientations. Firstly, I tested the cooler with the fins standing horizontally – a sub-optimal layout, as the air between the fins cannot readily rise vertically. Secondly, I orientated the system so that the fins were vertical, but against the recommended airflow direction specified by the manufacturers. Thirdly, I orientated the system in a way that should perform the best – with the natural convection following the path usually forced by the fan.

Keep in mind that the performance was tested in open air, an ideal situation by far over an enclosed chassis. In all tests, the system was held above the bench surface by 25mm at minimum (lowest point, be it rear IO, the heatsink, or the PCB) by plastic blocks, to ensure convection could occur effectively.

Keep in mind that the A6-7400K APU in the thermal test system has a Tj max of 70c, so whatever cooling we could achieve had to stay under this level. Thankfully, it is late summer here, so mother nature threw a worst-case scenario at the testing, and the ambient temperature was between 27-28 degrees Celsius (80-82F). 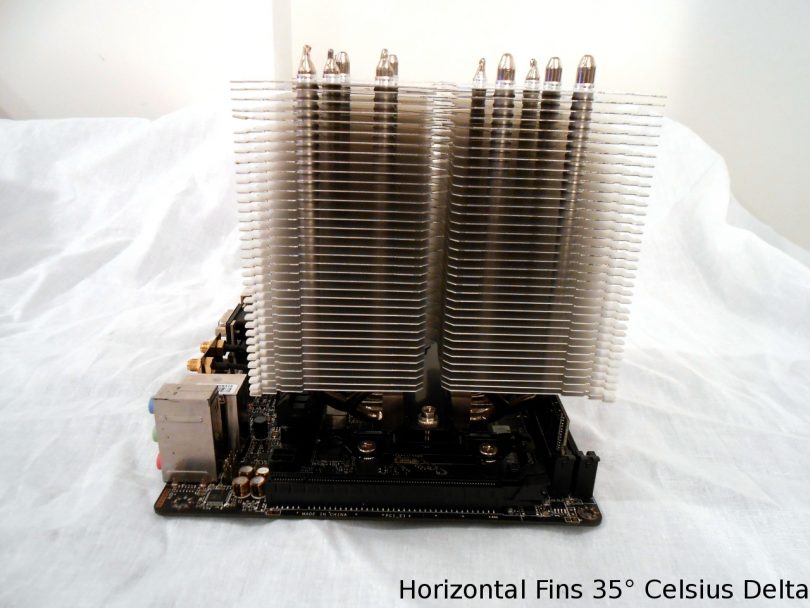 The Scythe Ninja 4, set up with the fins oriented horizontally, stabilized at 62°C after 20 minutes running Prime95 Small FFTs. The ambient temperature during this test was 27°C. A temperature delta of 35°C was achieved. 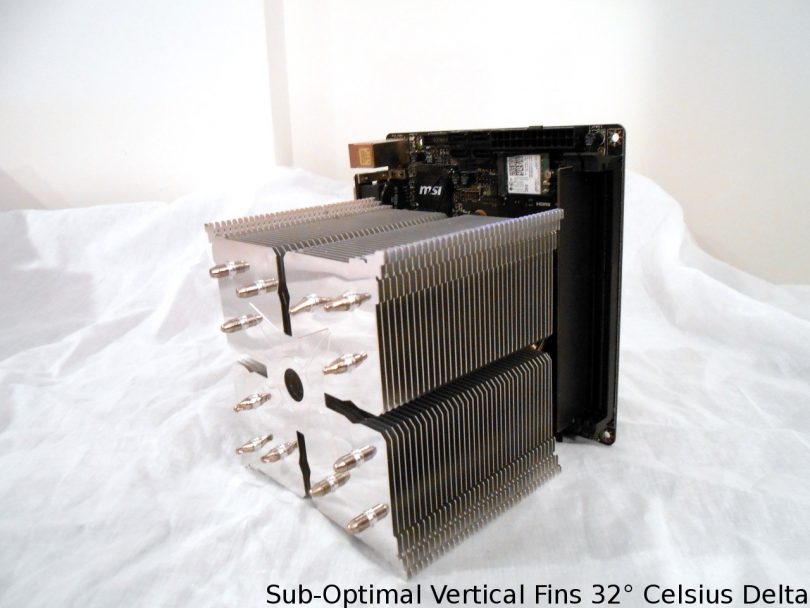 With a vertical, but sub-optimal layout (the Scythe Ninja 4 has a preference for fan airflow – front to back in this image), the system stabilized at 60°C after 20 minutes. The ambient temperature during this test was 28°C. This calculates to a temperature delta of 32°C. 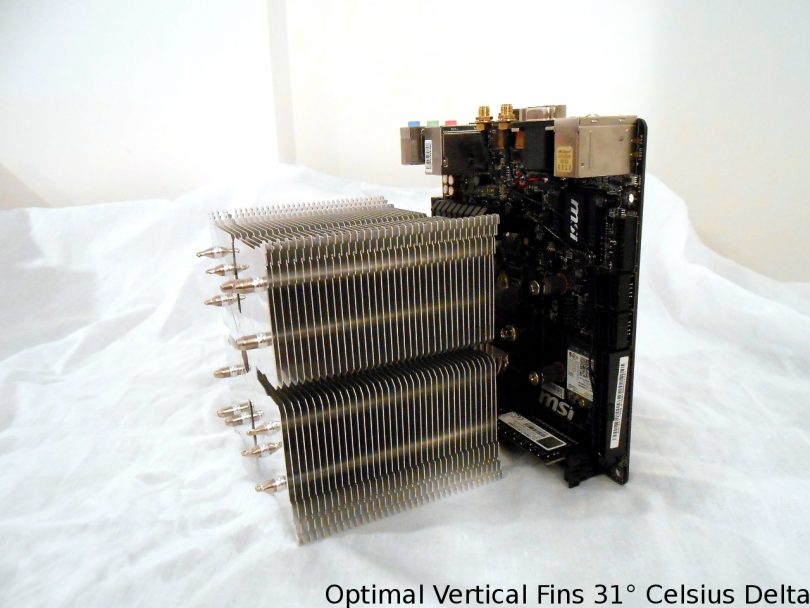 With the optimal fin layout, the CPU stabilized at 58°C after 20 minutes. The ambient temperature during this test was 27°C, leading to a delta of 31°C.

These tests are interesting in their own right as an experimental curiosity, but keep in mind that there are other components in your system that need cooling when installed in passive builds. CPU VRMs, RAM, and chipsets all produce heat (even if less than the CPU) that needs to be taken into account, and adequately dispersed. Most motherboards and memory modules are only designed with active cooling taken into account, with small heatsinks or no heatsinks at all on these secondary heat producing components. Thus, if pursuing the passive route, it would be wise to perform thorough testing on your system, checking all temperatures with the internal temperature probes, or using an infra-red thermal sensor.

The addition or upgrade of heatsinks on the other heat producing components will undoubtedly increase the stability and lifespan of your components, and it is generally recommended to rely on more robust cooling solutions for those parts of your system when designing passive cooling builds.

Whilst yes, orientation does make a difference, at 4 degrees total from worst to best, it’s negligible in our testing. The only time 4 degrees would be an important thing for you is if you are sitting right on Tj max, in which case, passive cooling probably isn’t for you.

To achieve successful passive cooling, there are a multitude of factors to consider:

As always, your results will vary, so spend the time on research and development if you wish to chase the holy grail of computing – perfectly silent performance.