There is basically no information on these units available other than what’s listed on Lian Li’s website. They both share grill designs, what appears to be the same slim 120mm fan as the SilverStone SX500-LG, full modularity, and  relatively short flat ribbon cables. Also, to avoid any confusion, despite the tagline in the marketing image these units are SFX-L, not SFX. The listings for both units mention that the fan voltage varies with both temperature and load, but it makes no mention of semi-passive functionality so it’s likely these units have always-on fans.

They differ in efficiency rating and of course wattage, but one interesting difference between the two new units is that the 550W has flush connectors.

SFX-L is 30mm longer than SFX so recessing the modular connectors helps compensate for the extra housing depth in cases that were designed primarily for SFX, like the NCASE M1. This is something I’d been hoping would happen so it’s a pleasant surprise to see a product with this feature already. 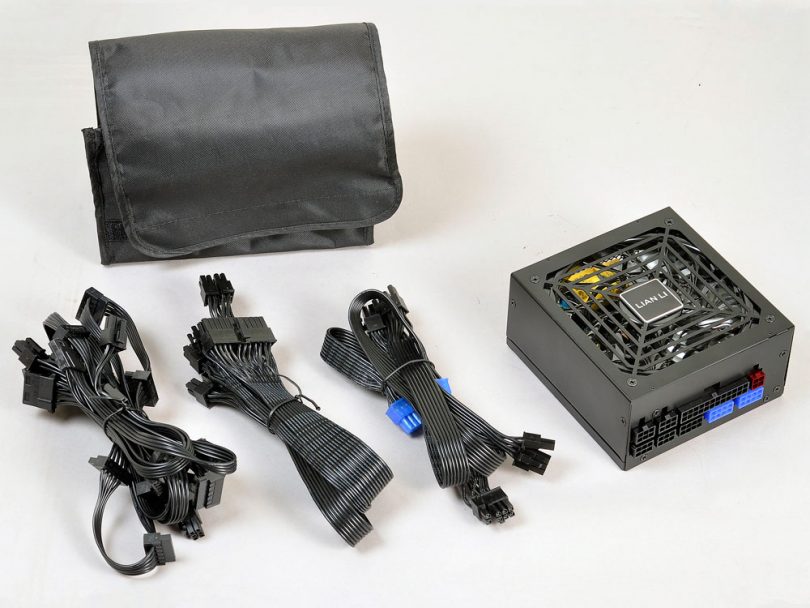 The 750W on the other hand has 4x 6+2 PEG connectors, split between two cables. According to the listing on the website, the PE-750 can do it’s full rated wattage on the 12V rail so it should be suitable to power a beefy dual-GPU setup like SLI GTX 980 Ti’s. One oddity with the PE-750 connectors is the red 4-pin connector to the right of the 24-pin in the above picture. It seems out of place, my best guess is that the 24-pin has some of the wires doubled for voltage sensing and those sense lines plug in there.

I haven’t found any clues as to the OEM. The most likely suspect is High Power/Sirfa since they already have a 500W SFX-L and they have a 700W Platinum unit in development for SilverStone. There’s been an uptick in the number of OEMs developing SFF PSUs lately though so it could very well be a new player. I’ll update this article if I get any more information.

Edit: The 550W at least is from Enhance according to the UL number and possibly the 750W based on the heatsink design. Thanks to qwan546 on the jonnyGURU.com forum for spotting that! I’m not 100% confident that Enhance is the OEM for the 750W since the housing design is different so I’ll continue looking for confirmation on that.

Edit 2: Thanks to veryrarium in the forum, it looks like the chances are high that the 750W is from Enhance too. The “ENP7175” on the barcode sticker on the 750W in the pictures is very similar to the product numbers for other Enhance-based units.

Overall this is a very exciting development, between this and the upcoming SilverStone SX700-LPT, we’ll have not one but two SFX-L power supplies capable of running even high-end dual-GPU rigs.

No word on price or availability.