Intel’s new Skylake platform partially launches today, starting at the high-end with two new CPUs (the i7-6700K and i5-6600K) and new motherboards based on the Z170 chipset. The rest of the CPU lineup and the other motherboard chipsets will be released at a later date.

Here are the Mini-ITX and microATX Z170 motherboards that have been announced so far:

AnandTech has a pic and some specs of the Fatal1ty Z170 Gaming-ITX/ac but nothing on the ASRock site or at any retailers. My suspicion is that this board won’t be available right away, a common trend as you’ll see. Highlights are an Intel NIC (a Fatal1ty board with no Killer NIC? Awesome!), 802.11 AC, USB 3.1 ports in both Type-A and Type-C, and a Sata Express port. Not much else to go on right now, I’ll update this post once full specs and pictures are available. 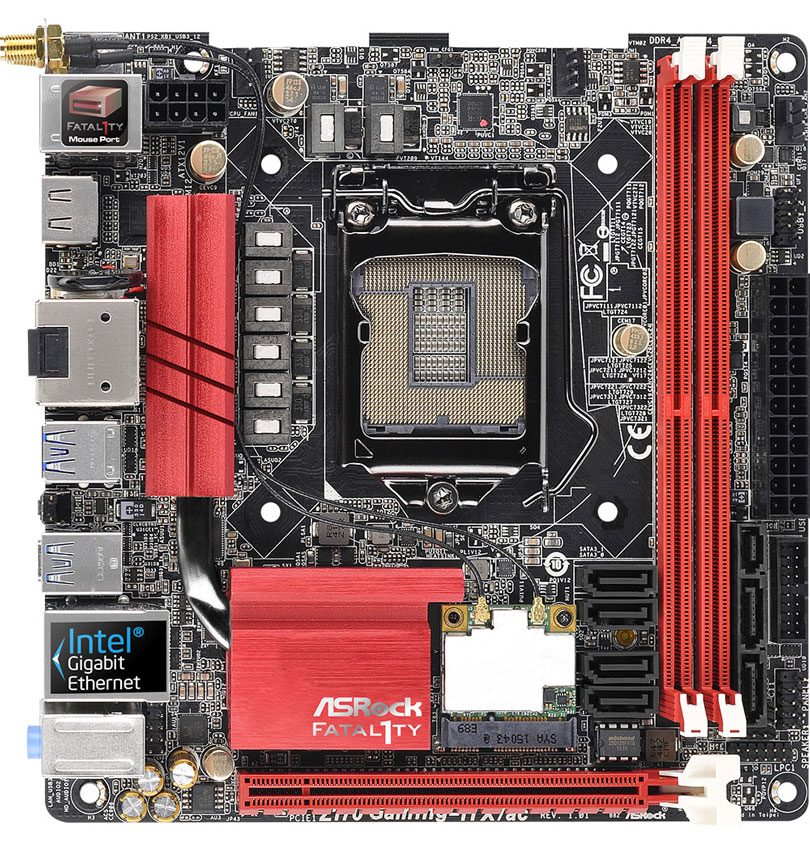 Edit: Listing has shown up on ASRock’s site. In addition to the previously listed specs there is a PCIe 3.0 x4 M.2 slot on the backside of the motherboard. It supports M.2 drives in 60mm and 80mm length.

Also reported by AnandTech but also nowhere to be seen on ASRocks’s site is this board. Interestingly it has dual NIC’s (one Intel and the other Realtek) but no USB 3.1, a rather strange trade-off considering there are only 4 Sata ports so this isn’t aimed at the NAS market. Rather plain looks so presumably this will be the value option. 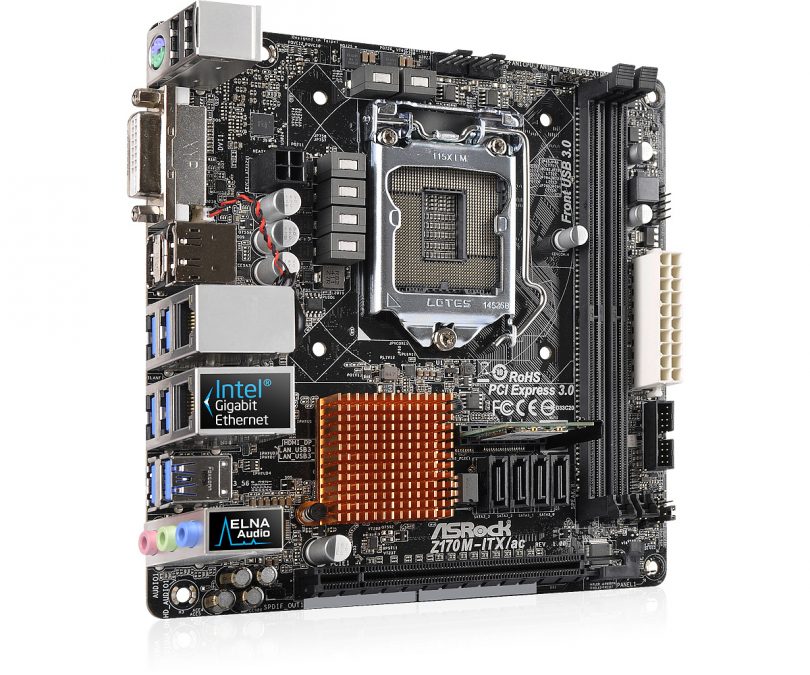 JJ from Asus confirmed in the PCPartPicker Skylake livestream that a Maximus VIII Impact is coming and Raja from Asus has said it’ll release in about a month. 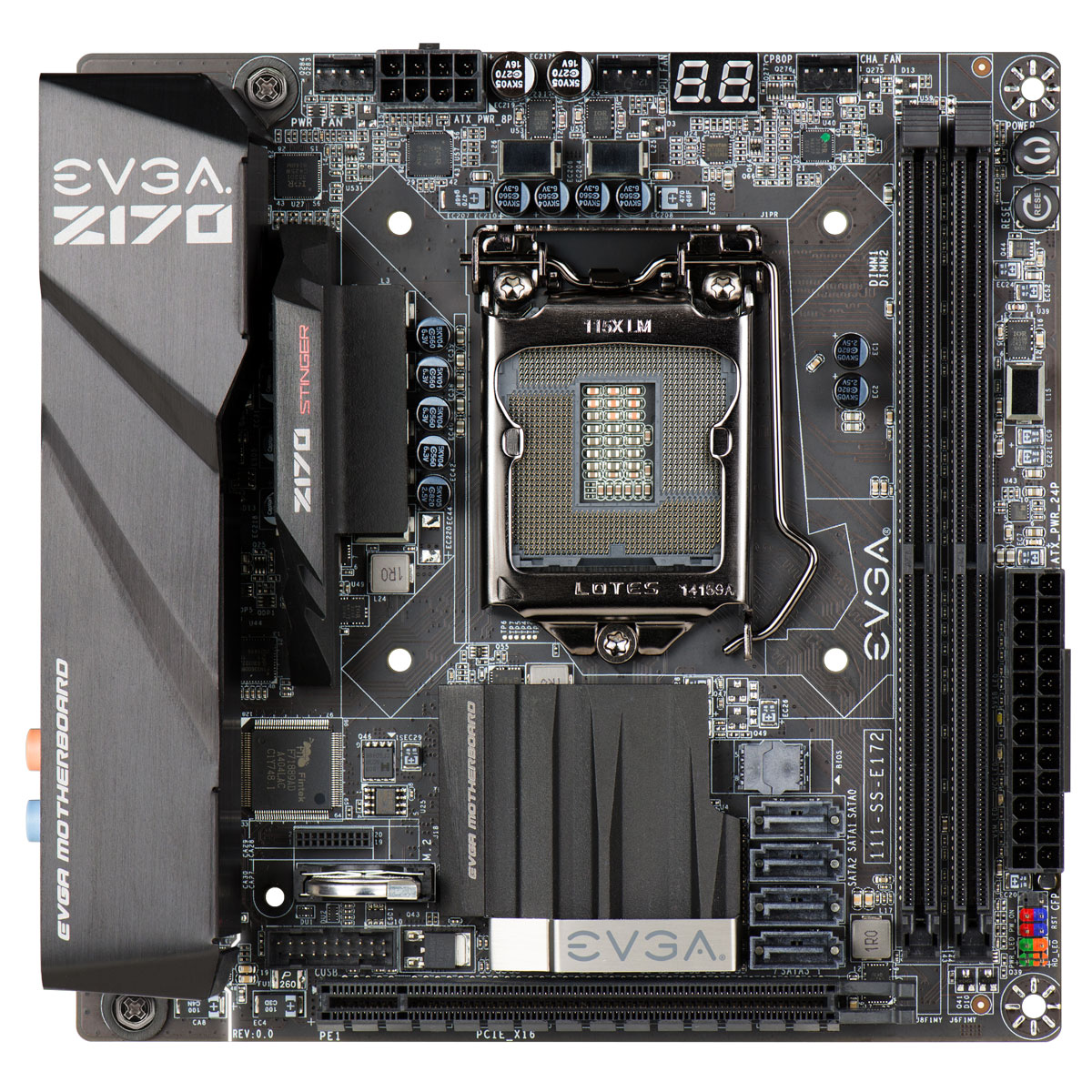 Carrying over the new styling from the X99 Micro2, this new enthusiast ITX board from EVGA looks beautiful. Unfortunately it’s rather lacking in next-gen connectivity, no U.2 or Sata Express, the M.2 slot it does have looks like it’s for WiFi cards rather than SSDs, and no USB 3.1 ports. It sure does look good though. Currently available from EVGA’s website for $200.

Continuing the trend, AnandTech has pics and specs for the neat looking Z170N-Gaming 5 but there’s no sign of it on Gigabyte’s website or at retailers. It’s good to see the styling and features from the high-end gaming ATX boards they showed off at Computex made it over to smaller form factors. So the shielded PCIe slot is here (though no mention of the RGB lighting), Killer NIC, Intel AC wireless, USB 3.1 A+C, and 1 or two Sata Express ports. The Sata Express ports are angled though, a fairly common practice on larger boards, but I’m not sure how well this will work on Mini-ITX due to the much larger variation in case design and since the Sata Express connector is fairly bulky this could render the port unusable. There appears to be what’s hopefully a proper M.2 port on the backside of the board though.

Pretty straightforward, this is a Skylake version of the Z97N-WIFI. Once again AnandTech is the source for this.

Edit: It’s been listed at a few retailers in Europe and Australia but there doesn’t seem to be any in stock yet.

Not much to say here, it shows up in a product table in MSI’s press release but no pictures or other details that I could find. It’s a Mini-ITX motherboard and it’ll have a Turbo M.2 slot (which should mean PCIe 3.0 x4), Intel AC wireless, and an Intel NIC. No USB 3.1 though.

Aug 22 edit: Not official, but a picture of the Z170I Gaming Pro AC has shown up. Very sharp looking and continuing the trend, it appears that the M.2 SSD slot is on the backside of the board. 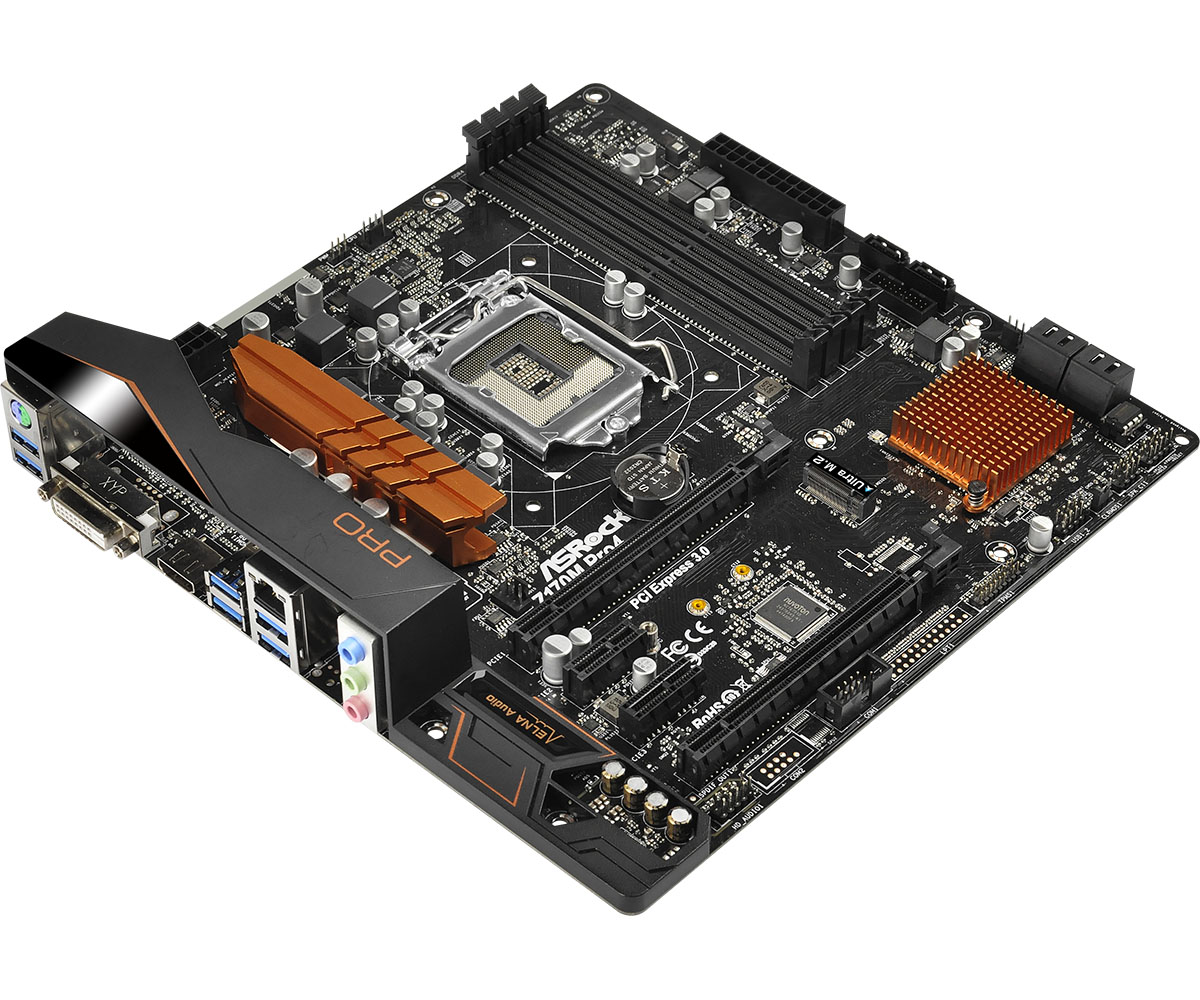 A slightly costed down version of the above, the only differences I can see is a simpler VRM heatsink design and there is no IO shield. 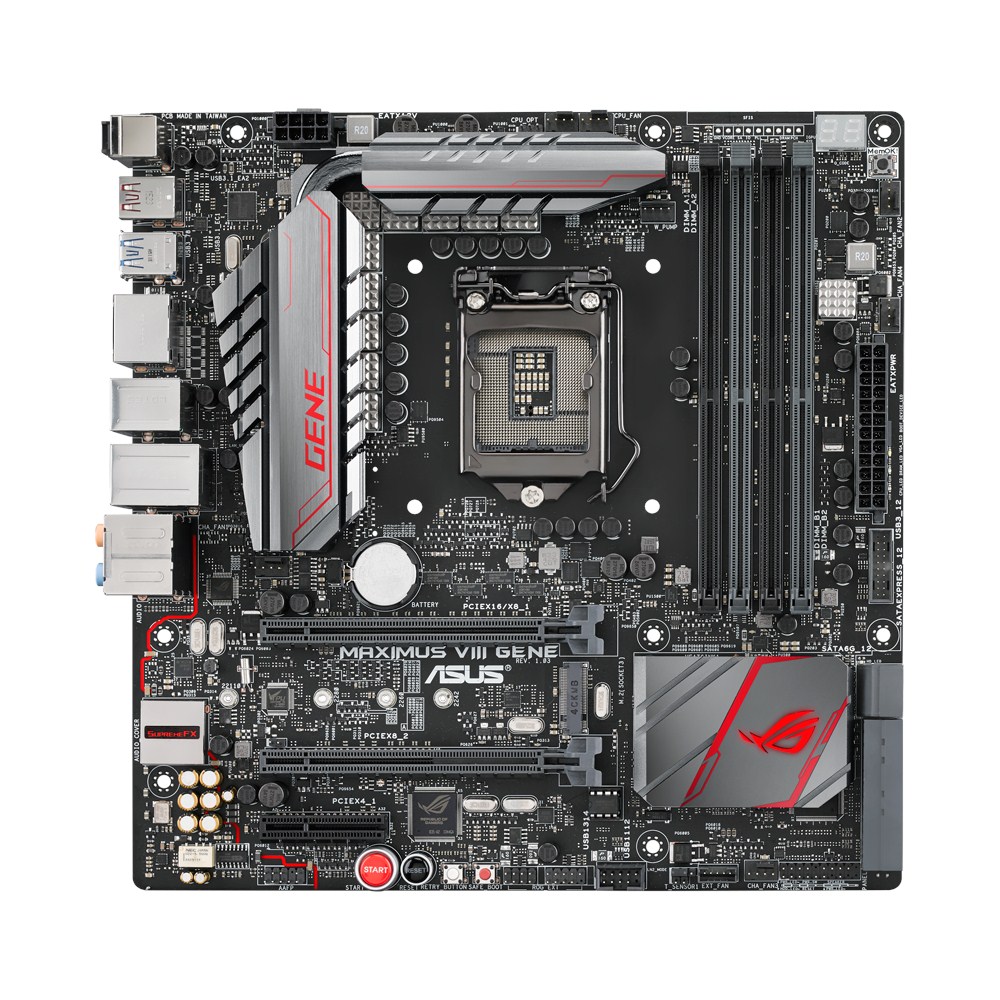 I’m very much liking the more subdued styling of the Skylake ROG boards, mostly monochrome with red accents. All your typical ROG features with some nice additions over the previous generation like USB 3.1 A+C and PCIe 3.0 x4 M.2. It is listed on Newegg for $230 with a release date of August 7. 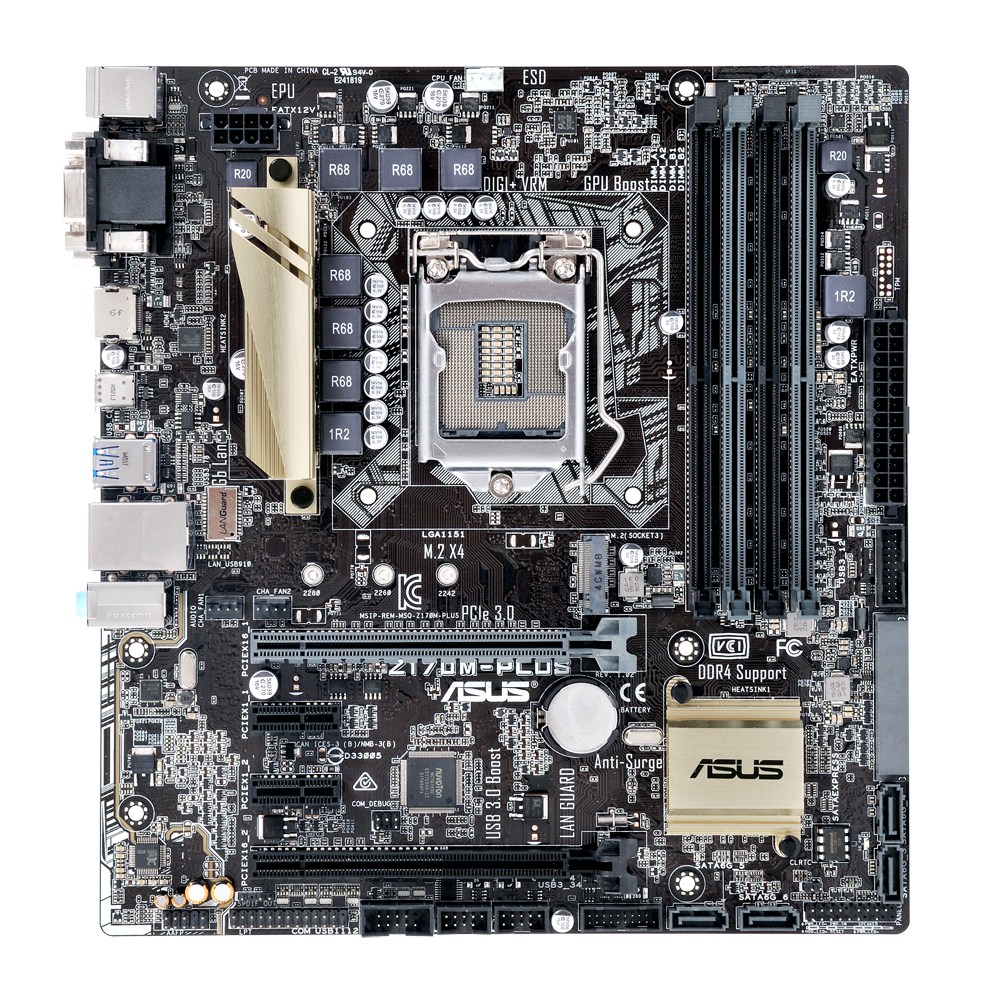 A Skylake update to the Asus Z97M-PLUS. Unfortunately it also carries over the gold heatsinks instead of using the black and white aesthetics of its ATX brethren. It swaps the PCI slots from the Z97 to PCIe x1, upgrades the M.2 to 32Gb/s, and gains a Sata Express port. It does have a single Type-C USB connector on the rear IO but it is only USB 3.0 and although there are x8 worth of contacts in the bottom PCIe slot it is only x4 electrically according to the spec page, so no SLI. It is in stock at Newegg for $130.

Like the ITX MSI board, this is listed in a product table but no other info is available. 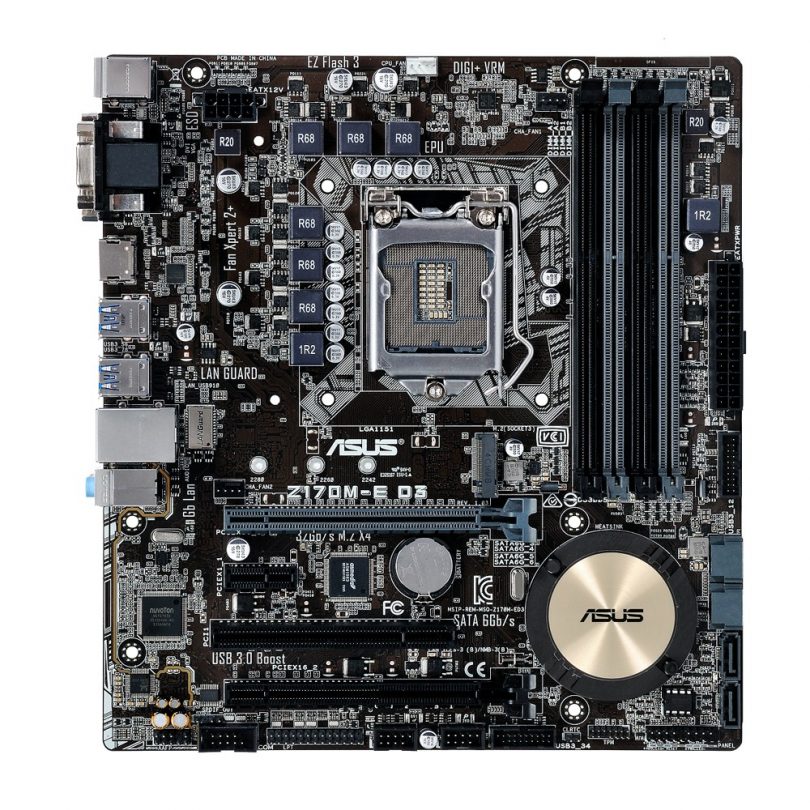 Edit: There is now an entry on the Asus website for this model. Specs are nothing special except for the RAM. Intel only officially supports DDR4 or DDR3L on the Skylake platform. DDR3L is the low voltage version of DDR3 and nominally runs at 1.25V, which is in line with DDR4’s 1.20V. All the other Z170 motherboards released so far have used DDR4, so this is unusual in that it bucks the trend and uses DDR3L, but not only that, it can use regular DDR3 as well. So either the voltage limit is not really a hard limitation or Asus is doing something extra on the motherboard side to make this work.

No listing on the website so back to AnandTech for this one. Like the ITX version, it carries over the new styling and shielded PCIe slots from the gaming ATX boards that Gigabyte has introduced for Skylake. It has a PCIe 3.0 x4 M.2 slot, three Sata Express ports, Killer NIC, USB 3.1 A+C, but no WiFi. The PCIe slots are labeled x16 / x8 / x4 but it’s unknown if it can run all those lanes simultaneously, it’ll depend on how it’s split between the CPU and PCH. 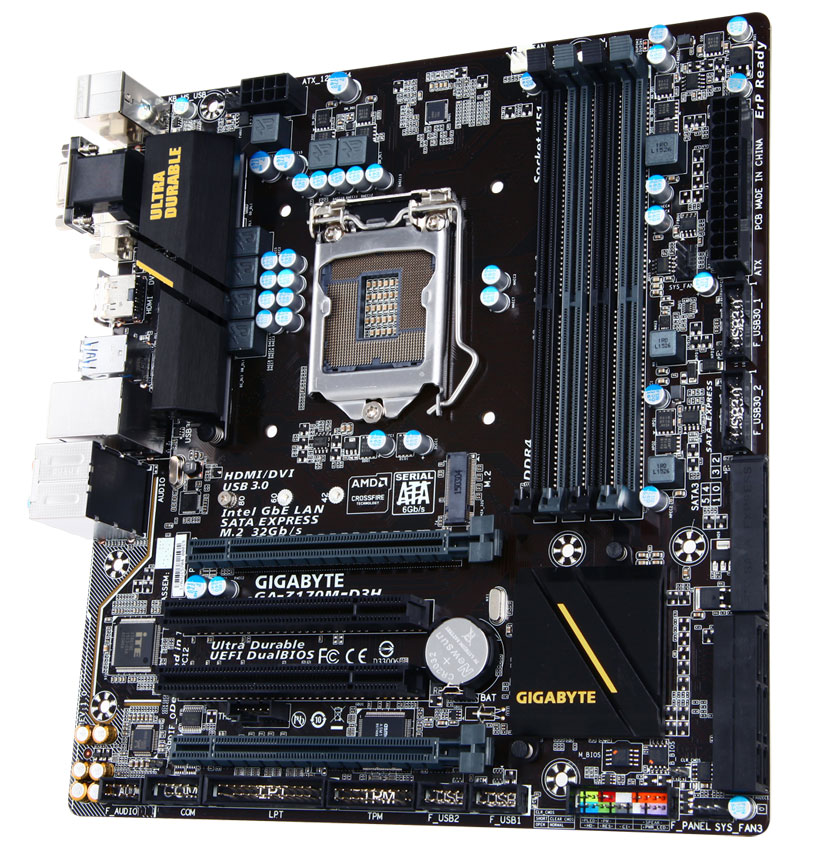 Like the MSI ITX board this only shows up in the product table in their press release. Doesn’t look too promising though, no USB 3.1, not an Intel NIC, M.2 but only for optional WiFi, and just CrossFire support listed so probably only x4 on the second slot. It’s not looking good for mATX SLI aficionados. 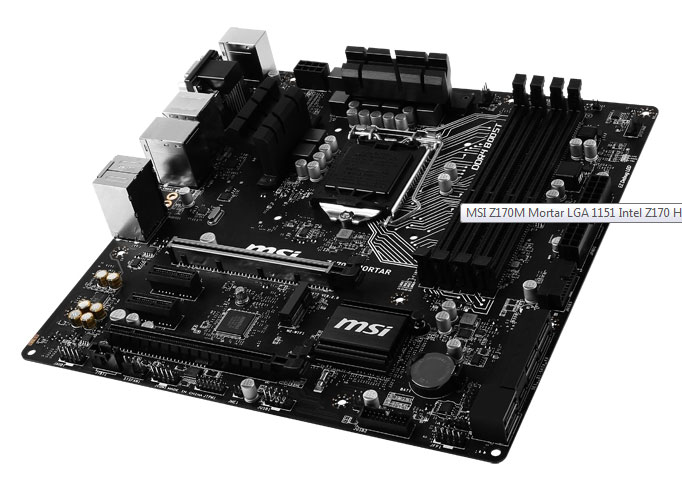 Edit: Still not on MSI’s website but the Mortar is listed on Newegg for $120 with a release date of Sept. 2. As I suspected the second x16 PCIe slot is only x4 electrically. The Newegg listing says 2 x M.2 but I’m only seeing one in the picture.

Better known for their server offerings, Supermicro has started developing products for the consumer market and is here with a mATX Skylake board. It has two USB 3.1 Type-A ports, 32Gb/s M.2, and an Intel NIC. Interestingly it does away with any pretense of dual-GPU and has just a single PCIe x16 slot. There is a x4 slot (and a x1) but it’s just beneath the x16 so CrossFire should technically be possible but only with single-slot cards.