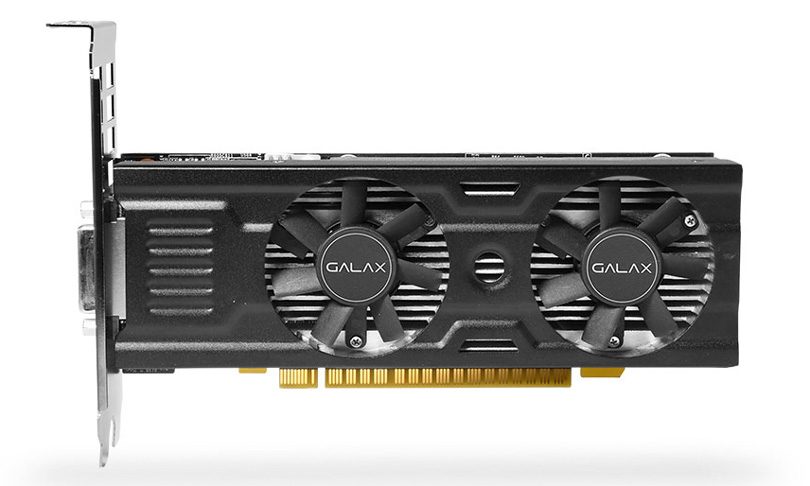 The official specs for both of these GALAX LP cards are 182mm x 121mm x 39mm (with bracket) and 166mm x 69mm x 34mm (without bracket). My own measurements based on the pictures indicates a length of more like 174mm though, as measured from the outside face of the vertical part of the bracket to the end of the card (basically what ends up inside the case). 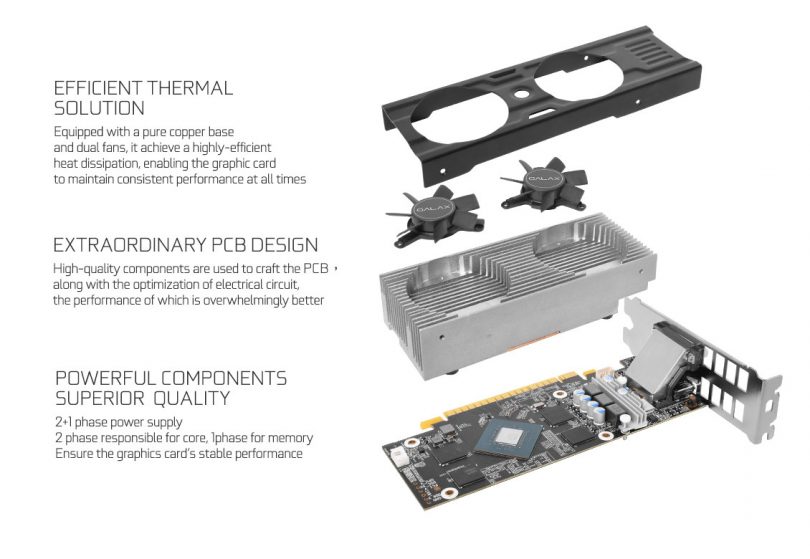 Between the three brands, these new GALAX cards appear to have the most robust cooling. They feature a copper plate embedded in a beefy chunk of extruded aluminum, and two cooling fans covered by a metal shroud. A badly set fan profile could completely negate this though, so we shall have to wait for reviews to determine if the seemingly better heatsink design will translate into quiet operation. 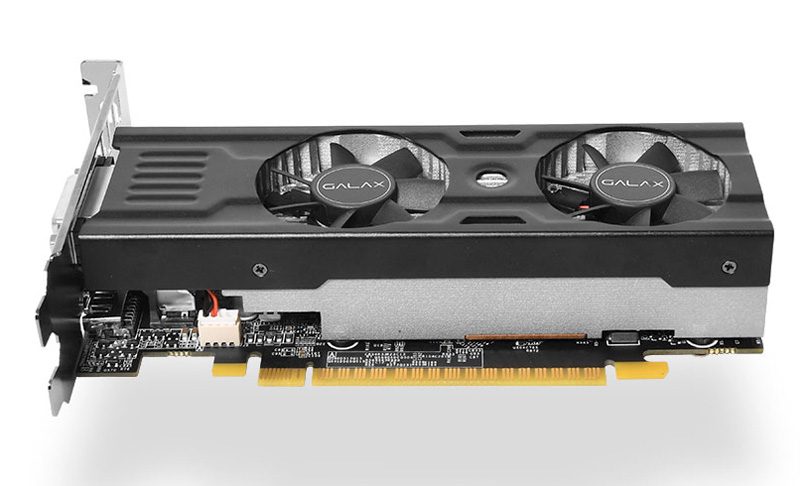 Speaking of fan profiles, one oddity I noticed from the marketing photos on the website is that although the fans are only 2-pin, the fan header is a 4-pin connector. So it may be possible to get a PWM signal out of the header for use with an aftermarket cooling solution of some kind. Mounting a third-party heatsink may be difficult though since these cards don’t have the typical square mounting pattern around the GPU die. 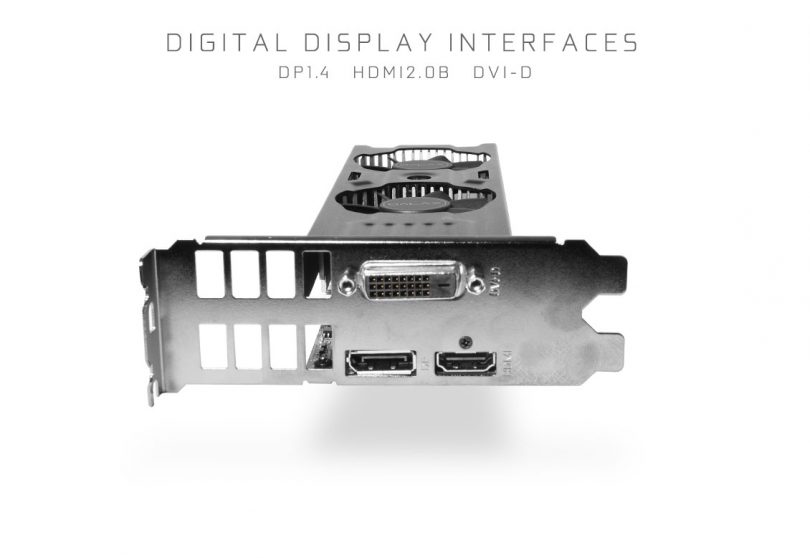 Unfortunately the GALAX cards are like their MSI and GIGABYTE equivalents in having a bulky DVI connector taking up the second slot, preventing the cards from potentially being used in a single-slot configuration. A DisplayPort 1.4 and HDMI 2.0B port rounds out the video connectors. 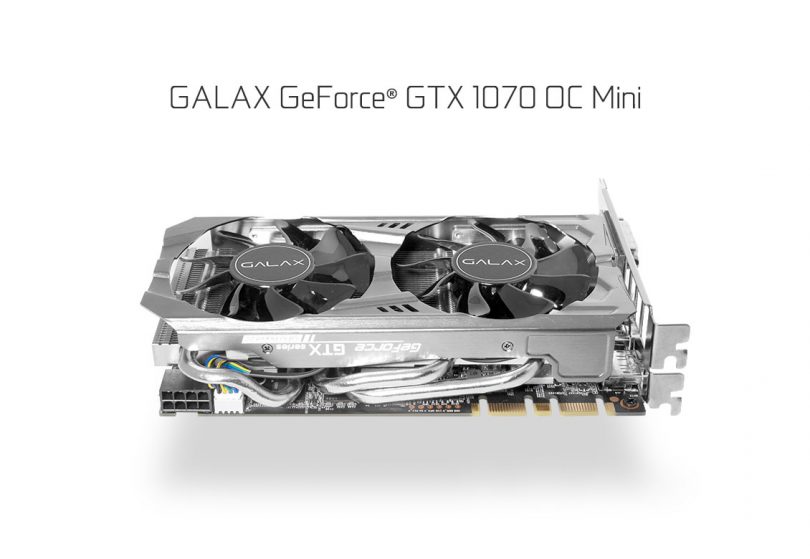 Without any fanfare, I also found this little beauty on the GALAX website: the GALAX GeForce GTX 1070 OC Mini. 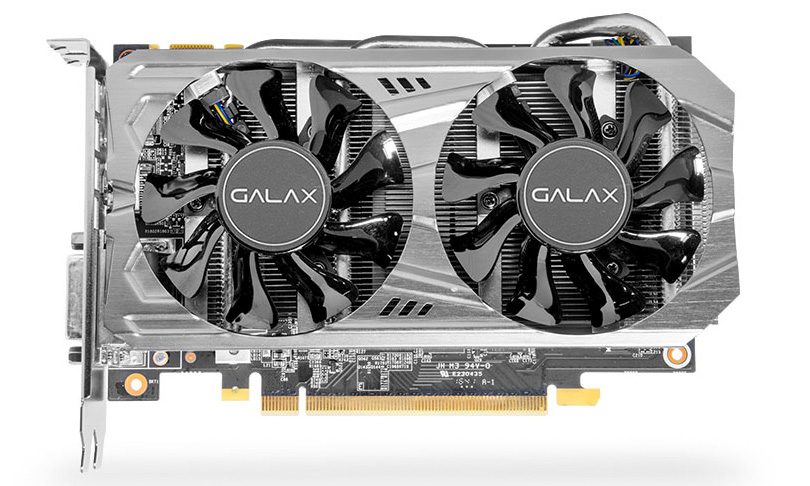 The official dimensions are 195mm x 130mm x 41.5mm (with bracket) and 181mm x 116mm x 38.6mm (with bracket) but by my estimation the length from the outside vertical face of the bracket to the end of the fan shroud is around 185-190mm. The fan shroud and heatsink appear to overhang the PCB but it’s hard to tell in the available pictures due to perspective.

Most impressively compared to the GIGABYTE and ZOTAC mini GTX 1070s though is that this card is almost reference height. I say “almost”, because the rear heatpipe sticks out a bit past the top of the PCB. 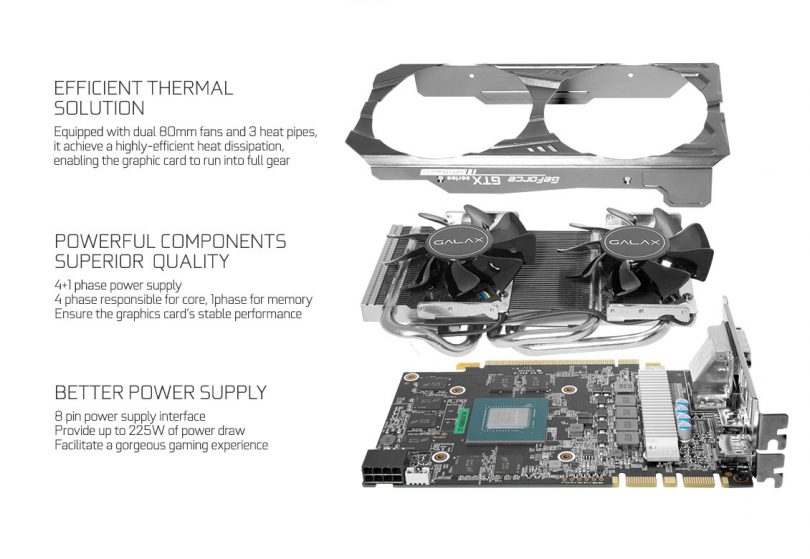 There are three heatpipes and the heatsink array looks fairly dense, both good indicators this should cool well. The dual fans are only 80mm in diameter though. I would have liked to of seen GALAX push the shroud out to the very top and bottom edges of the card in order to fit 92mm fans, but if the stock fans are of good quality it could still end up being a fairly quiet card.

Power is provided via a single 8-pin PCIe connector and the clocks are 1518 MHz base and 1708 MHz boost. 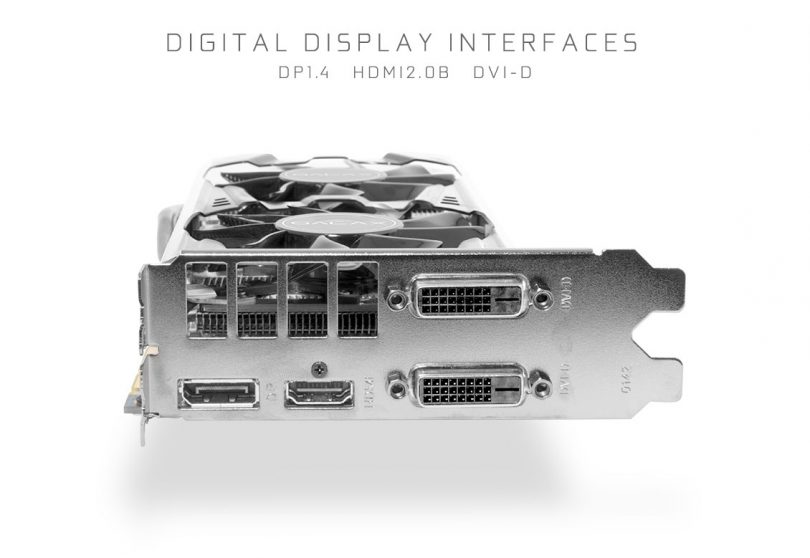 Once again a DVI connector is preventing this from being used in a single-slot config without requiring desoldering (or judicious use of an angle grinder). Even more so than the two low-profile cards, I find this extremely disappointing because the short length and height of the PCB on this GALAX GTX 1070 Mini would have made for a great SFF water cooled choice. GALAX did reveal a single-slot air cooled GTX 1070 last month but I’m skeptical it will actually make it to market while this certainly will.

We’re waiting to hear back from GALAX on pricing and availability.