Whilst we were unable to attend CES 2020, I’ve been trawling the depths of the interwebs for SFF related coverage to summarise in lieu of aforementioned physical presence. Let’s go!

Of course, AMD took centre stage, continuing the steamroller-like (pun intended, sorry!) push of the recent years. AMD produces both CPUs and GPUs, so we get a double barrelled keynote.

AMD is pushing into the laptop space more than ever, with the new Ryzen 4000 series, Zen 2 core, 7nm laptop CPUs. Taking aim at the three laptop market segments – ultrathin, gaming and professional, a pair of new APUs was launched – the Ryzen 7 4800U and the Ryzen 7 4800H. The 4800U features an 8C16T design, running at 1.8GHz (boosting to 4.2), 8 Radeon cores and a 15W TDP. In comparison, the 4800H is the higher performance variant, running the same core count and boost speed, but running at a more performant 2.9GHz base clock. With this comes a power trade off – this is a 45W chip. AMD claims the 4800H outperforms the 95W i7-9700K desktop processor in 3D Mark FireStrike. Not only this, but the new Ryzen chips handily outperforms Intel’s mobile i7-1065G7 chip in single and multithread performance, as well as in integrated graphics performance. (Source)

Speaking of graphics, the IGP of this generation of AMD APU features the blend of Vega and Navi technologies, replacing the pure Vega tech of the previous generation. This gives hope towards a hefty improvement in the 4000 series desktop APU’s IGP department.

On to the blue team, with news – Intel is entering the discrete GPU foray.. soon™. The DG1 discrete Xe GPU was on display at CES in both desktop and notebook formats. With development units already going out to a bunch of software dev houses, the software stack behind the upcoming platform is already in the works. And yes, this first card appears to be a sub 75W SFF card. Points to Intel! 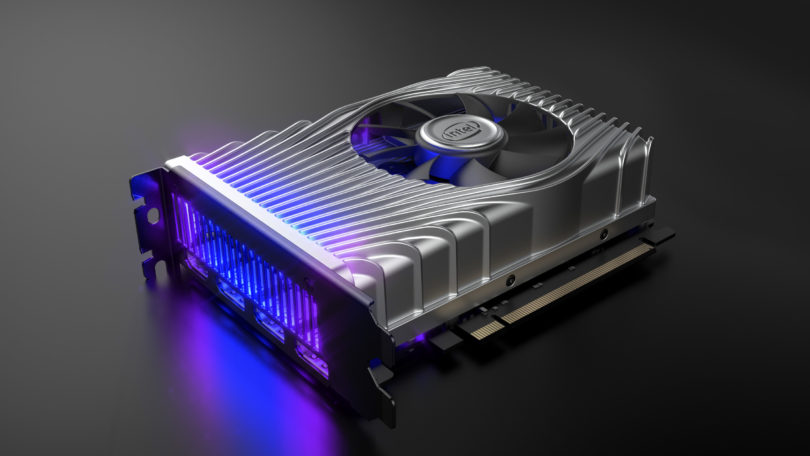 Of course, information is limited on this development platform at this time, with Intel not having disclosed architecture, power, performance, expected launch date, cost… anything really! Aside from the 1080p “Warframe” demo on show (where Anandtech reports it struggled to maintain smooth framerates at times), the tidbits of information we have is as follows;

On the CPU front, not so good news. With Intel’s new Comet Lake-S due any day now, we expected a bunch of boards and launch at CES, but were let down. According to a few sources, Intel pulled the launch back (even though board makers had their products ready for display), because of power consumption issues. With reports of a 300W power draw on the flagship 10 core chip, the i7-10900K. With shades of Prescott-era issues, it seems Intel really is pushing the Core architecture to it’s limits now. With the i9-9900KS sucking down a hefty 250W in heavy loads, it doesn’t bode well at this time.

Like a compliment sandwich, we’re back to the positive, with the launch of the Ghost Canyon NUC. More like a modern SFF gaming machine than the traditional uSFF embedded PC of previous NUCs, this unit offers some serious upgradeability. Like the ability to add in a discrete, desktop graphics card, for one. A replaceable mobile CPU* adds to the upgrade parts list. Starting at US$1,000 for a barebones, it’s not the cheapest SFF box, with many projects on our forum competing for performance in similar volumes.

Upgrades are made easier in the stock unit, with tool-less panels a key feature.

*The replaceable CPU is on a daughterboard, with the CPU soldered on.

A320 is the name of the game this CES for ASRock, with the Jupiter A320 uSFF machine, and the release of the highly anticipated A320-TM Thin-ITX motherboard. 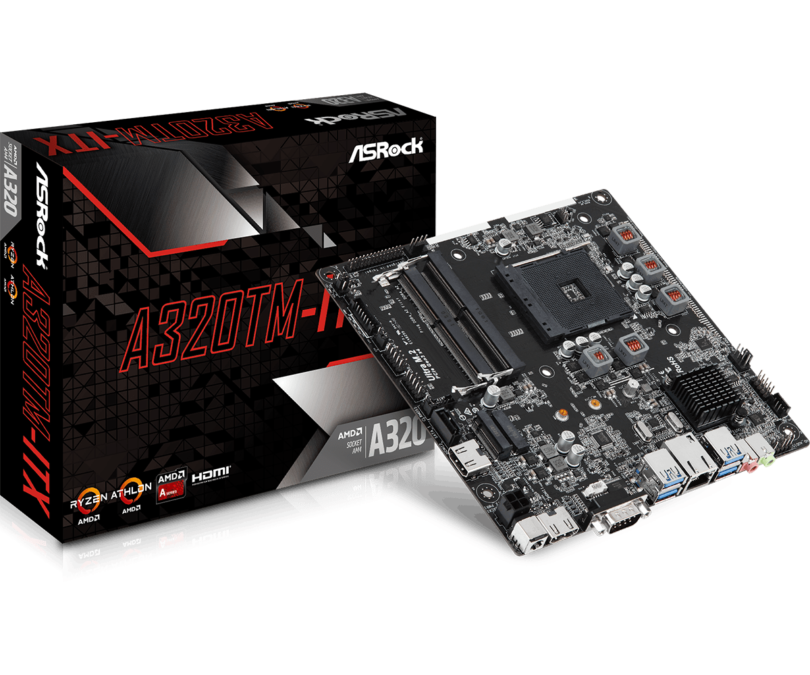 The Jupiter PC is a long standing member of ASRock’s uSFF line, however, it has been until now, Intel exclusive. Now, with support of up to a 65W AM4 APU, this is an ultra small PC that can actually be used for light gaming!

The A320TM-ITX is a thin-ITX board with support for 65W AM4 APUs, and will hopefully lead to a bunch of excellent builds in the forum.

Another stalwart of uSFF and SFF in general, is Zotac. On show at their suite was the ZBOX CA261 Nano, enclosing a passive cooled AMD Ryzen 3 3200U.

This little PC is gorgeous, with rounded edges and a hex grille all over. Hiding inside is the Ryzen 3 3200U APU, a 2 core, 4 thread APU running at 2.6 GHz base, and boost to 3.5GHz. This chip runs in at 15W, so is able to be passively cooled in the ZBOX CA261 Nano (which is smaller than it’s own name! … I jest). With Radeon Graphics (3 Vega cores, 1.2GHz). With all the connectivity expected of something with this power, it looks to be a great product. Well done ZOTAC!

As an aside, there will also be a fan cooled variant – the MA621 Nano, likely able to hold boost clocks for longer periods.

Not a SFF PC per-se, but a handheld in the vein of the Nintendo Switch – Alienware’s Concept UFO. With twin controllers, the resemblance is strong. Running on Intel’s 10th gen processors, and housing an 8 inch screen, performance and other specs are unknowns at this time. 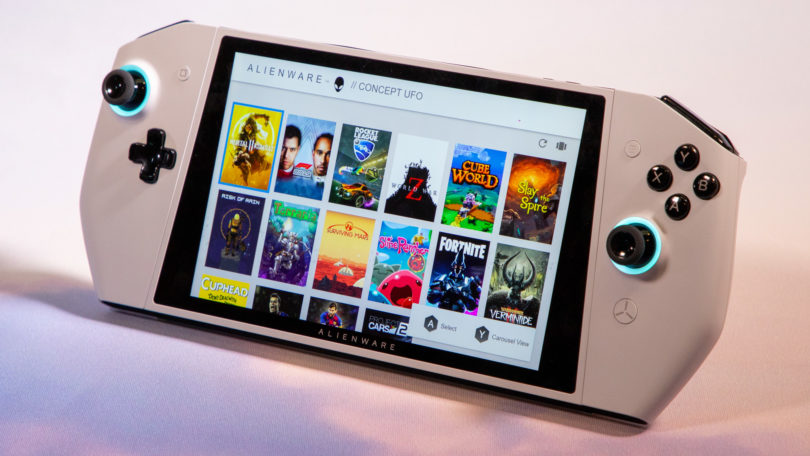 Always one to put on a show with concept products, Razer showed off their 10 litre Tomahawk. Other news outlets cite the unit as being “awfully tiny” but we know better, don’t we? Being based on the Intel Compute Unit (similar to the one used in the Ghost Canyon NUC), there’s some hefty upgrades that are able to performed. A SFX power supply juices up the whole shebang, with up to an RTX 2080 Super being able to be installed inside the chassis. Nifty!

This unit does have the challenge of using Intel’s Compute Unit, that being a mobile CPU on a daughterboard. I expect hefty prices for CPU upgrades, alas. 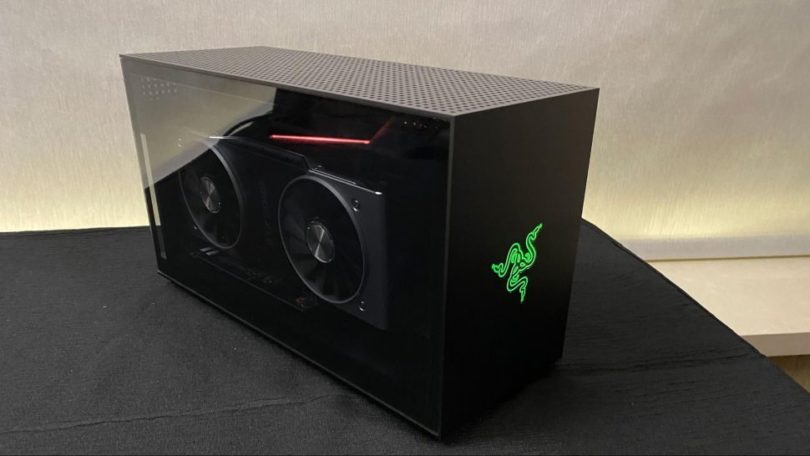 CoolerMaster has released an AIO cooler with a built in LED screen.

Not often one covered in the PC space, Arduino has released a IoT focused board that could find it’s way into some interesting uuSFF (ultra-ultra SFF) projects –  the Portenta H7. With a dual core ARM Cortex-M7 or M4 processor, these US$50-100 boards are unofficially targeted at the hacker/tinkerer world – I love it. The Cortex M7 processor isn’t the biggest powerhouse, running at 480MHz, it should allow for some interesting embedded projects, nonetheless. Product Page. 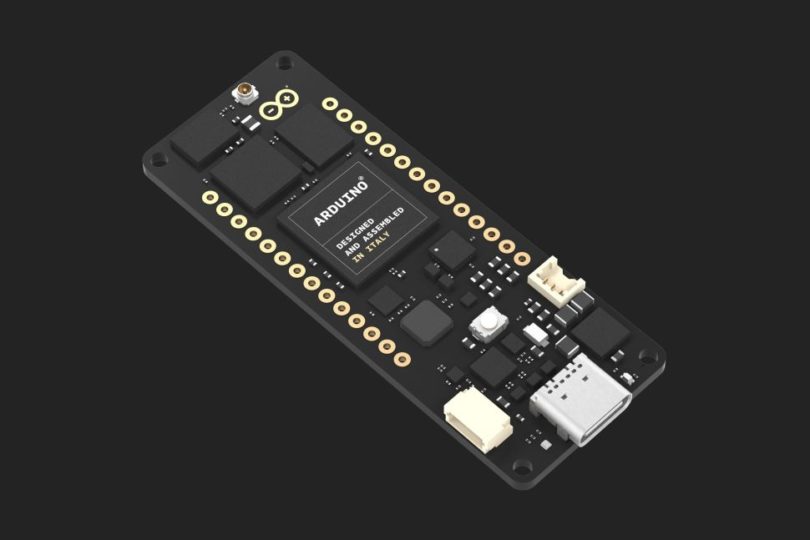 Looking like a nightmare for cooling, the Revolt GT3 is a tempered glass box that may or may not keep your prebuilt rig cool. 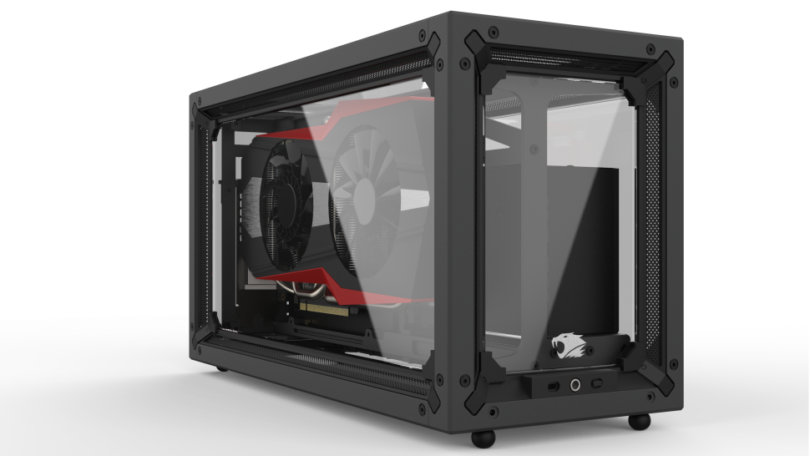 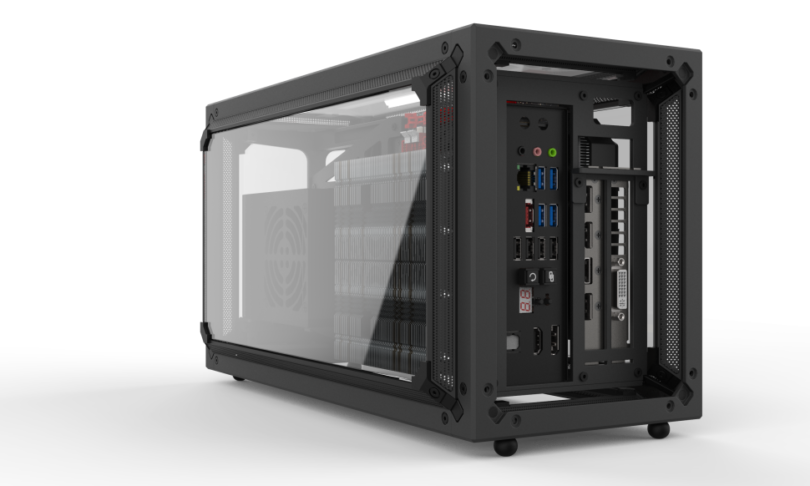 All jokes aside, vents all over the chassis leads to what could be a decently performing system. With the inner chassis supported with rubber standoffs, this is also aimed at being a quiet system – nice! At 14.7 litres, it’s not “seriously compact” as Tom’s Hardware puts it, but it’s decently small. Pricing is unknown at this time – also noting that the Revolt series is a prebuilt PC series.

Another system integrator taking a stab at SFF is Cyberpower. At 7.5L, this is just over half the size of the above iBuyPower unit, but cheats a little, using the Intel Compute unit I mentioned earlier. The chassis itself is a CoolerMaster product, and houses a SFX power supply like the Razer Tomahawk. Whilst these small gaming boxes are a great addition to the SFF world, we’ve seen better implementations in smaller volumes in the forums. For much cheaper too, with an 8c16t Intel Core i9-9980HK in the Compute Element, 16GB of RAM, 1TB Intel 660p NVMe SSD, and an 850-watt Cooler Master power supply for US$2,399. Oof. 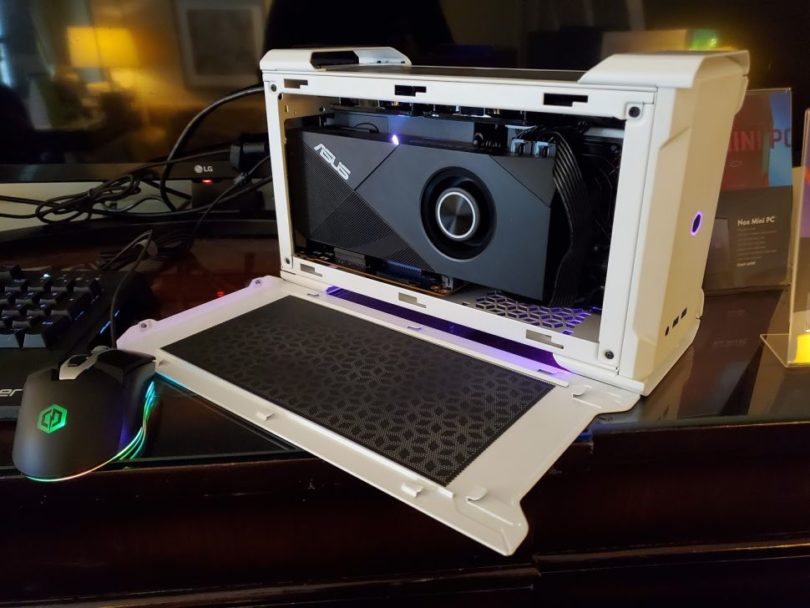 There’s probably a lot I have missed – browsing news sites and hoping to catch every SFF product, where the other sites don’t focus on SFF, can be a fruitless endeavour. Share your CES news and discoveries over in the forums!

Many thanks to TechPowerup, Anandtech, Tom’s Hardware and others, who could be at CES when we couldn’t – so we could source info nonetheless.