EdZ said:
I think you have hugely overestimated the rate at which you could produce completed devices, and hugely underestimated labour costs for labour-intensive production processes. 80 per hour is 45 seconds to assemble a completed unit, and that's barely enough time for even one or two cycles of quill spin-down, toolchange, and spin-up, let alone enough time to mill a complete part (or assemble that part into a final assembly).

The universal use of stamping and turret-punches is because they are dramatically faster than any other machining process, and time is money. Even Lian Li, who specialise in boutique cases with short production runs, limit themselves to performing as few operations as possible with laser/plasma/water cutters and doing as much as possible though stamping.
Click to expand...

Also on that note I am not suggesting it is cheaper. Just that the cost of doing so compared to the costs they are being sold at I am struggling to understand why we are not looking at much better quality products relation to the cost. OK of course it is profit etc but my concern is that the budget £40 units are finished better than a lot of the SilverStone products which often look like they are prototype products being sold as premium.

Curlyriff said:
my concern is that the budget £40 units are finished better than a lot of the SilverStone products which often look like they are prototype products being sold as premium.
Click to expand...

This is where fixed-costs vs. per-unit costs start to intersect.
For 'budget'; units, you can sell a lot of units. That lets you spread fixed costs over a lot of units, so each units is paying a smaller fraction of that outlay. for large runs, you can move more and more of your production steps from general-purpose machine to single-purpose tooling, by spreading the cost of that initial tooling setup.
In contrast, 'premium' units sell a lot fewer. For the SX800-LTi vs. the ST30SF or ST45SF, I might guess an order of magnitude less. Now, your fixed costs are a much larger chunk of total cost. Per-unit costs scale nicely (e.g. higher grade capacitors, beefier MOSFETs, etc), but it may now be that making a custom stamp that's a closer fit to your Mini-Fit Jr. connectors would drive up the unit cost by $30 (number made up), while for the 'cheap' units that custom tool would cost $3 per unit.
On top of that production time is a factor too. Silverstone have had several occasions where production delays of their SFX models have resulted in similar units from the same OEM being sold by a competitor who are willing to skip fine-tuning steps first.
Last edited: Feb 1, 2017
G

Thank you for a great, thorough review with excellent conclusion points taking the fiscal/pay back scenario into account.
R

So it looks like I now have two of these now...

Sometimes Amazon is TOO efficient with customer service. If that's even a thing.

Going to be hard to get freight forwarder to return the second one to Amazon.

Maybe I should put the extra one in the Dr Zaber Sentry as a quiet HTPC.
Reactions: Biowarejak, ricochet, jeshikat and 1 other person
H

Seems that the European batch is delayed in transit.
Reactions: Phuncz
R

I have a spare!

That's a bummer. Any ETA?
H

Apparently end of the month or beginning of March. SO frustrating; need it for my modified Coolstream SE 120 experiment.
Last edited: Feb 9, 2017
H

Looking at this PSU, do you guys think it could handle a couple of non-OC'ed reference 1080 ti's and an OC'ed 7700k? I'm thinking of going sli in a smaller build so I put my current build (changing my single 1080 to 2x 1080tis and it says 804 watts on pcpp. Just curious if i could drop down to an sfx psu from an atx one for a future build.

Also very happy with mine, the fan sits idle unless I play games. At that point the GPU's noise takes over.

loader963 said:
Looking at this PSU, do you guys think it could handle a couple of non-OC'ed reference 1080 ti's and an OC'ed 7700k? I'm thinking of going sli in a smaller build so I put my current build (changing my single 1080 to 2x 1080tis and it says 804 watts on pcpp. Just curious if i could drop down to an sfx psu from an atx one for a future build.
Click to expand...

Honestly I don't see any problem. The 800watt figure would be loading the whole PC at 100% which just wont happen. 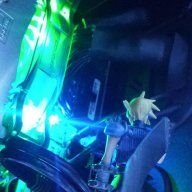 Hi there everyone! I actually just joined the site ( I will dig through it all in a bit once I get my question out of the way. Or several of them ) and had several questions about this psu. I've actually purchased it and am currently using it, I do have the Corsair SF600 ( Amazing PSU btw! ) but I picked up a Asus 1080ti and felt I needed a bit more juice to cover my butt just in case. I plan on modding my case ( Carbide Air 240 ) soon and move the PSU to the main chamber with everything else ( Acutally already did it with the SF600, but when I got the SX800 the cables were long enough to go back to the OEM spot )

But enough of the rambling, to the questions!

1. I wish to crack the PSU open and change the fan for a 120mmx25mm fan ( https://www.newegg.com/Product/Product.aspx?Item=N82E16835181068 ) and will be using this cable ( https://www.amazon.com/dp/B002FR84FY/?tag=theminutiae-20 ) so I won't need to solder anything. But my concern is with this "Non-contact tachometer tape" ( https://smallformfactor.net/wp-content/uploads/SilverStone-SX800-LTI-fan-front.jpg ) and the "shield" to direct airflow.

Is that piece of reflector tape NEEDED on the fan to make sure the PSU works properly?

Kizakura_Panda said:
I've actually purchased it and am currently using it, I do have the Corsair SF600 ( Amazing PSU btw! ) but I picked up a Asus 1080ti and felt I needed a bit more juice to cover my butt just in case.
Click to expand...

So you know, 600W should be a good deal more than enough for a single 1080 Ti. Heck, the Falcon Northwest Tiki Z with an overclocked Titan Z (dual Titan chips, 375W TDP card) made due with a 600W SFX PSU.

Really now, I am new to the whole SFF scene am not use to seeing builds with such "low" wattage psu's. I also changed up the psu choice partially because of the fan difference. With the SX800 having a 120mm makes the "mod" I want to do simpler since the PSU is already using that size ( well, a 15mm not a 25mm. ) but that is good to know.

If you are going for low noise, then the Silverstone will be better, as it is semi-passive and won't run the fan at low power draw.

@Aibohphobia is at Computex right now, so he is probably busy going to meet various vendors, writing up content, etc. I haven't disassembled the SX800, so I can't give advice with hands-on experience for substantiation, but if you are just concerned the shield won't be able to wrap around the fan, as it is thicker, I'll remind you that you are modding it all in the first place, so you are free to make creative solutions (or not-so-creative, if you please, like duct tape, that just works) to remedy these issues.
Reactions: Kizakura_Panda