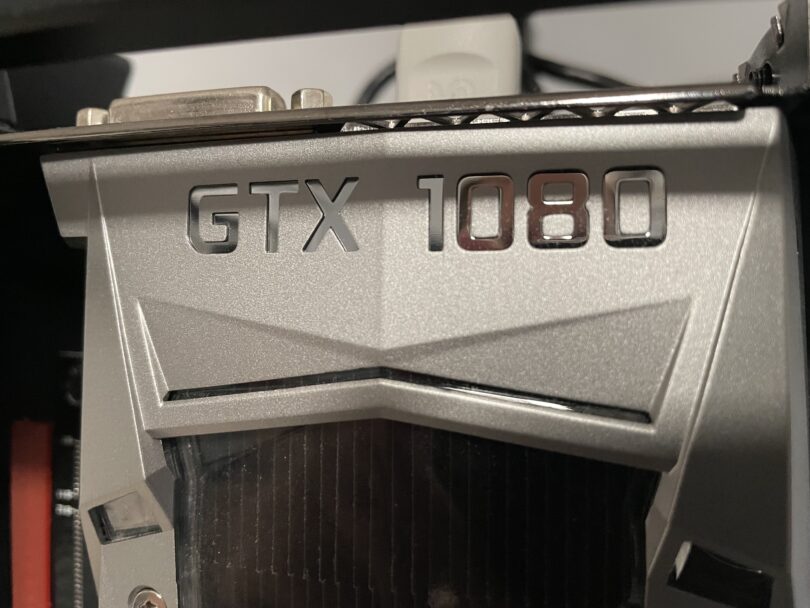 Written by Chris (aka Revenant)

We are currently building a database of GPUs, and the very first one tested is the GTX 1080. As the database grows, we thought it would be fun to share some of the test results with you.

In May of 2016 Nvidia officially launched their Pascal line of GPUs starting with GTX 1080. It was a step ahead of all the competition, and only got better as the drivers matured. Moreover, it sipped power at only 180 watts, overclocked like a champ, and could be pretty quiet with even the Founders Edition blower cooler. With Pascal, Nvidia created one of the most revered, sought after, and respected GPU lines released since the 3Dfx Voodoo2.

…and Nvidia has been kicking themselves since then. Anyone remember the RTX 3000 series launch video? The one where Jensen outright said “To all my Pascal gamer friends; it is safe to upgrade now.”. Well this GPU is still haunting them, and for good reason.

Let me start by saying that this GPU was originally purchased in 2016 by a family member, and remained in their system with an SLI sibling until last month. Now this family member had a bad habit of breaking their glass side panel so for a good chunk of their life, the GTX 1080s ran on an almost open bench. Aside from blowing some compressed air through it, no other maintenance was done. The six year old thermal paste might be a little tired, but the card still ran within clock specifications.

At a later date and in another article, I’ll be tearing these cards down and refurbishing them. For now, we’re going to run them as if they were a fresh $200 purchase off of eBay.

Additionally, these are Founders Edition cards with the reference blower 2-slot cooler. This is a good looking, reasonably quiet cooler that is good for SFF builds but gets utterly taken to the mat by third party axial coolers. If you have the opportunity to get a third party cooler model with a larger heatsink, I suggest doing so. Once the FE GTX 1080 hits 83C it begins to ramp power back, and drop to its base clock. Once I refurbish this card, I’ll have another article about overclocking it.

With that out of the way, let’s talk about testing methodology.

All GPU tests are conducted on an open bench or open frame case such as the Xtia XPROTO to provide the card’s maximum cooling potential. Obviously, whatever case you choose will have an effect on temps. A preliminary run of each benchmark is done to ensure functionality, and allow shaders to compile. This is done after every resolution change. Benchmarks are run three times, averaged, and measured using OCAT. As this is a test of graphical power, the highest graphical preset for each game is used for benchmarking. The benchmarking process is manually reviewed and monitored to ensure no errant behavior. 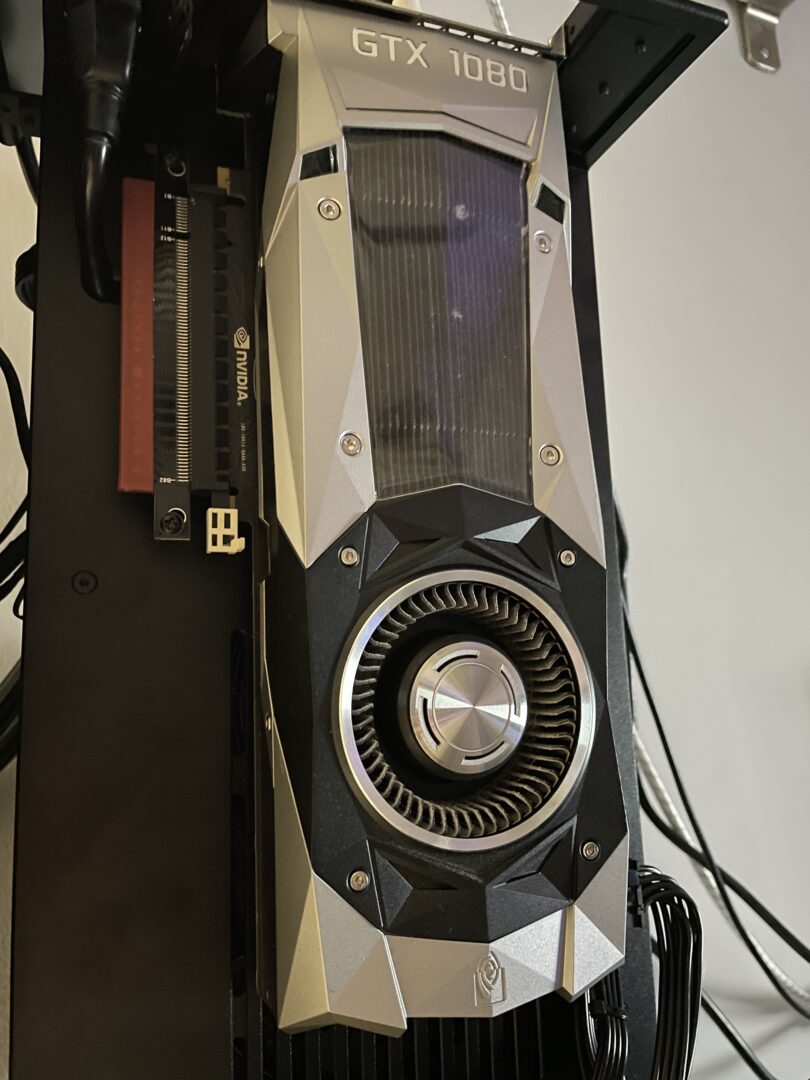 One caveat to keep in mind is that this is a benchmark and not an optimization guide. It is absolutely true you can lower settings and engage technology like FSR 2.0 in many of these games. Doing so, you will see a substantial improvement in performance. Moreover, Ultra/Max settings are often an egregious use of GPU resources on visual differences that most people don’t even notice. However, that’s information for a different article. In this case, we’re looking at if the GTX 1080 can still run everything maxed at out at our most common resolutions, and provide a playable experience. In other words, how much gas is left in the tank of this once king-of-GPUs. 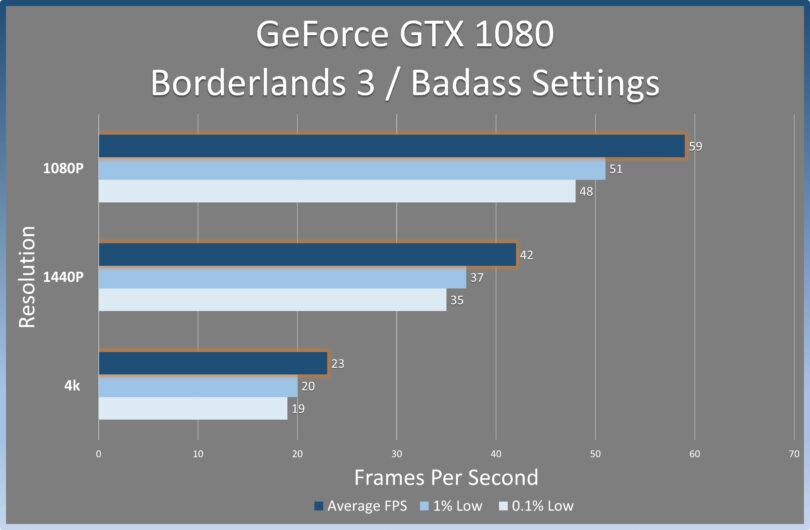 Borderlands 3 is an Unreal Engine 4.0 game, and is one that pushes the GPU hard on it’s highest preset aptly named “Badass”.  The GTX 1080 was able to provide 59FPS at 1080P. While not a locked 60FPS, it’s good enough that the game would feel very smooth and playable on a monitor with variable refresh rate technologies like Freesync or GSync. At 1440P resolution, the GTX 1080 could provide a console controller friendly locked 30 FPS. At 4K the frame rate was unplayable. 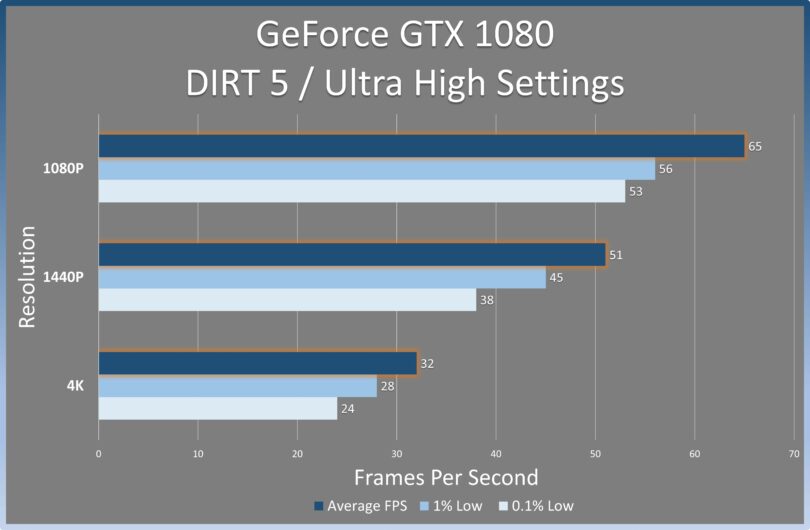 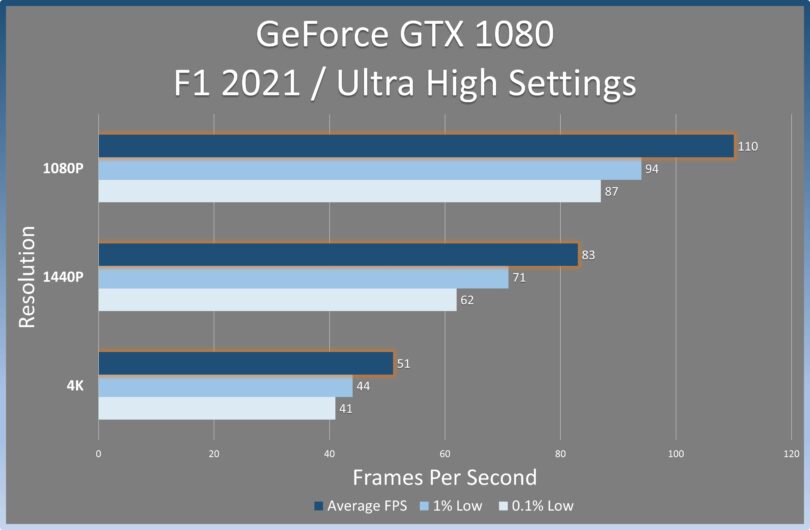 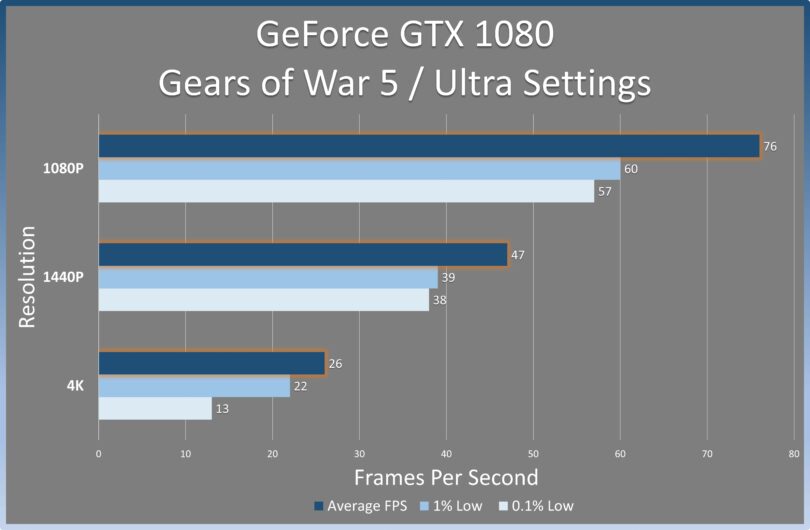 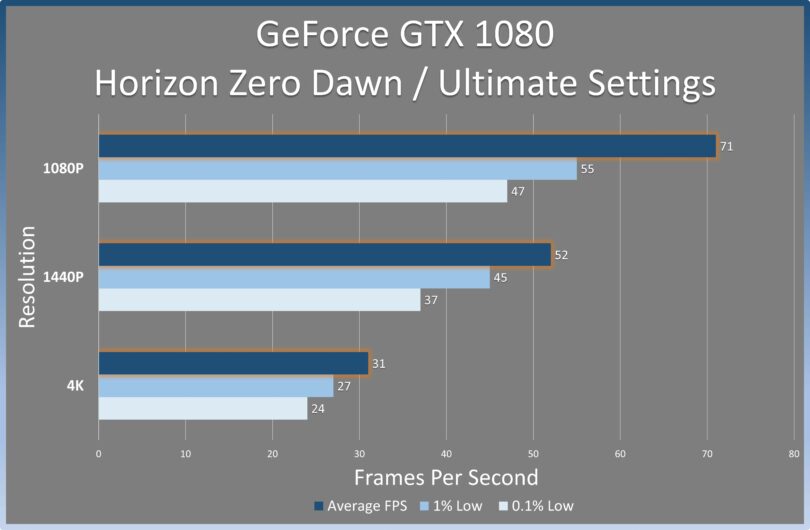 Horizon Zero Dawn uses the Decima engine. The GTX 1080 provided strong average FPS numbers at both 1080P and 1440P, but suffers from far lower 1% and 0.1% lows in those resolutions. This means that frame rate drops and spikes are going disrupt a smooth gaming experience regardless of if you have a VRR display. 4K averaged 31FPS, but also suffered poor 1% and 0.1% performance. 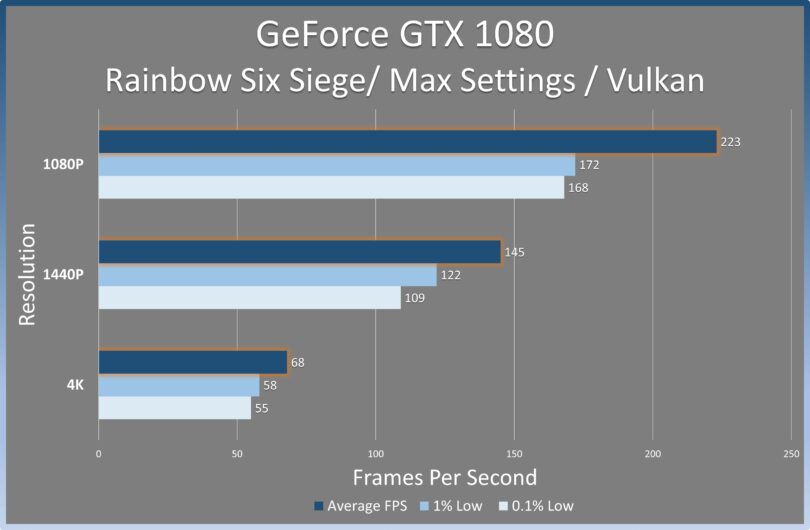 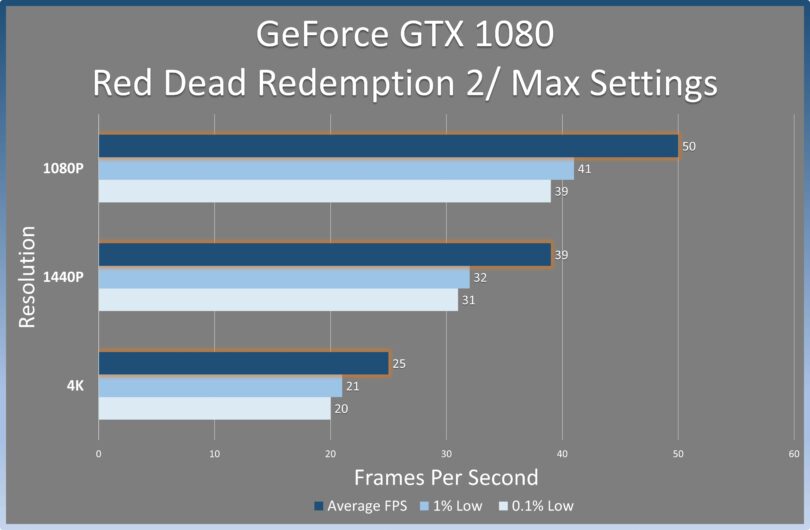 Red Dead Redemption 2 comes riding in on Rockstar Advanced Game Engine, and promptly tramples the once king-of-GPUs. At 1080P you’re looking at an almost locked 40FPS, and at 1440P a locked 30FPS. AT 4K we saw at best 25FPS with very Sega Saturn like 20FPS 0.1% lows. 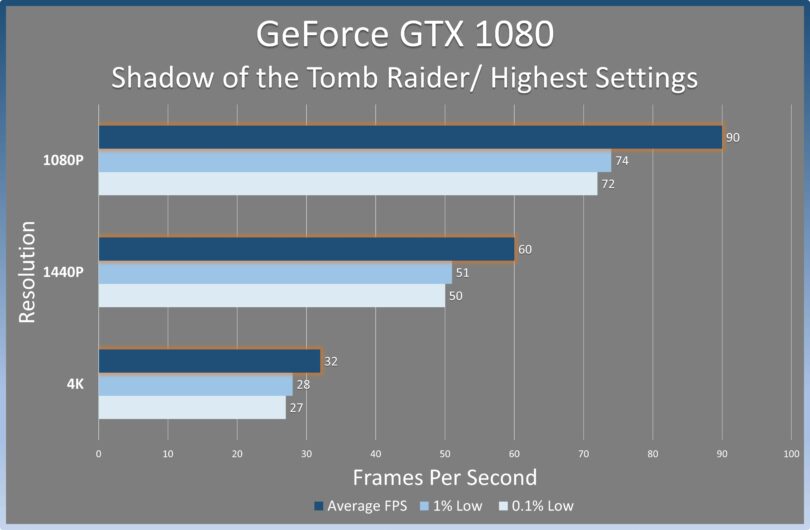 Shadow of the Tomb Raider uses the Foundation Engine, and also suffers from hard drops in the 1% and 0.1% low metrics. 1080P can offer a solid locked 60FPS while 1440P can achieve a great experience with a VRR monitor at nearly 60 FPS. 4K is, at best, a near 30FPS experience. 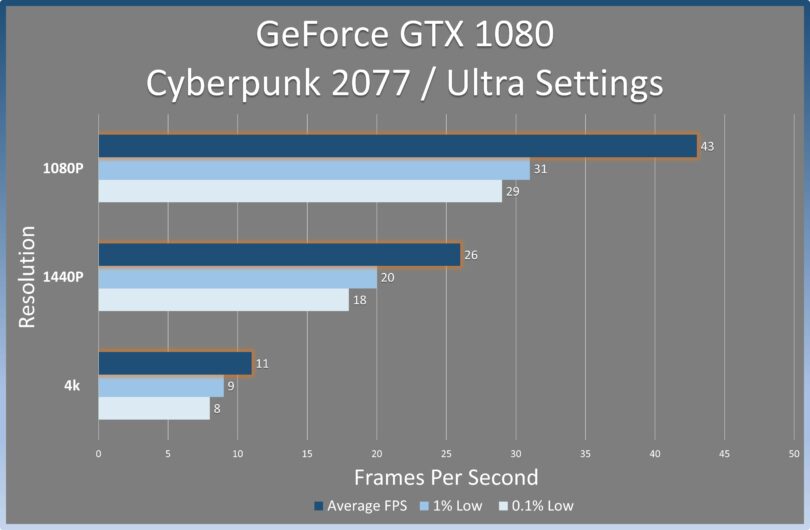 If the GTX 1080 was feeling good about the scores so far, it won’t be after Cyberpunk 2077 lays a massive beat down on its CUDA cores. Can it run Cyberpunk at Ultra settings? Only at 1080P, and only if you like 30FPS gaming. 1440P runs like a badly optimized PS3 game, while 4K runs like an FX chip game on the Super Nintendo. 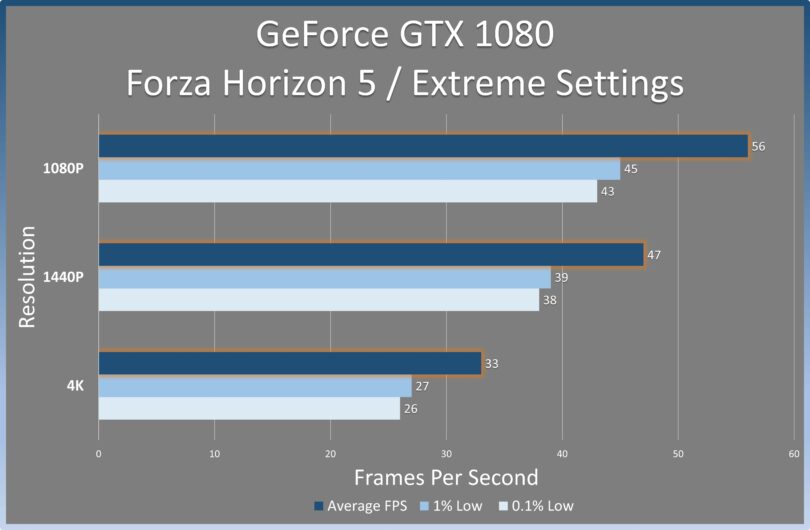 After the pummeling that was Cyberpunk, the GTX 1080 comes back swinging with  solid Forza Horizon 5 performance running on the ForzaTech engine. All resolutions are playable as long as you have a VRR monitor or are willing to lock the framerate, though 4K is on the edge of playable. 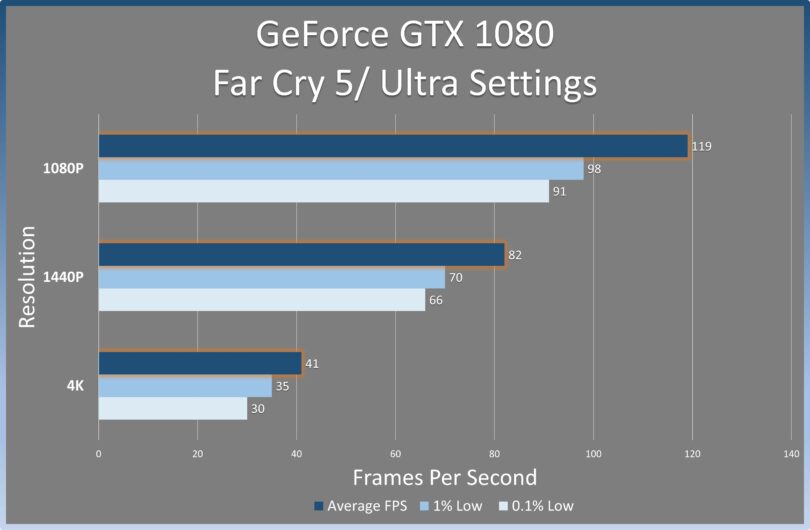 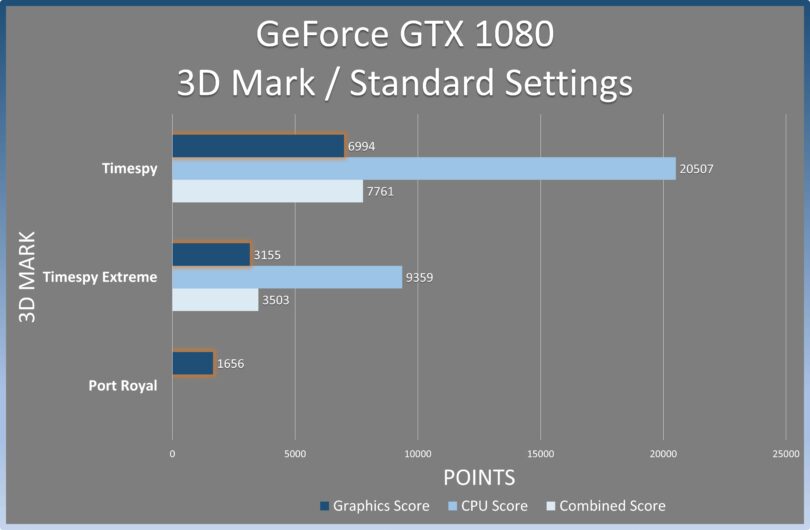 Finally we have UL Solutions 3DMark. 3DMark has been and industry standard measure since the 1990s, and continues to be a useful tool today. Timespy and Timespy Extreme showed graphics score of 6,994 and 3,155 respectively. Port Royal is a ray tracing benchmark, and can technically run on the GTX 1080 despite the Pascal GPU having no built-in ray tracing hardware. Not unexpectedly, the GTX 1080 performs poorly in the Port Royal benchmark.

The GTX 1080 was once king of the GPU world, but that was six years ago. That’s another life in the computer world. It’s still a solid GPU for mid to high detail gaming at 1080P and 1440P, but it can’t run with the ultra setting crowds anymore. However, before you think I’m coming down too harshly on it, let me just point out again that it’s a six year old GPU. That’s an amazing life span. It does owe part of that to the fact the PS4 and Xbox One were so comparatively weak, but it also owes a lot to how well Pascal was designed.  When it debuted, 4K monitors or even TVs weren’t nearly as commonplace as today. If you’re running a GTX 1080, and use a 1080P monitor, you’re probably still pretty satisfied. With FSR 2.0 becoming available, you’ll probably be able to stretch it even further. Give it a little overclock for a boost of about five to ten percent.

Currently, you can find a used GTX 1080 at around the $200 range on eBay. A new GPU in that price range on New Egg usually consists of the GTX 1650 or 1660, or the Radeon 6500XT.  The AMD 6500XT is a terrible GPU with poor support for ray tracing, limited PCIe bandwidth, and only 4GB of memory. The Nvidia 1650 and 1660 are limited to 6GB of VRAM, and have a lower level of performance. Personally, I think the choice is clear.

The GTX 1080 isn’t king of the GPU world anymore, but currently it does still hold the keys to the $200 kingdom. How long that will last with the plummeting prices of the post coin crash remains to be seen.

Written by Chris (aka Revenant)
We are currently building a database of GPUs, and the very first one tested is the GTX 1080. As the database grows, we thought it would be fun to share some of the test results with you.
In May of 2016 Nvidia officially launched their Pascal line of GPUs starting with GTX 1080. It was a step ahead of all the competition, and only got better as the drivers matured. Moreover, it sipped power at only 180 watts, overclocked like a champ, and could be pretty quiet with even the Founders Edition blower cooler. With Pascal, Nvidia created one of the most revered, sought after, and respected GPU lines released since the 3Dfx Voodoo2.
…and Nvidia has been kicking themselves since then. Anyone remember the RTX 3000 series launch video? The one where Jensen outright said “To all my Pascal gamer friends; it...
Click to expand...

Always wanted a 1080, was always out of reach for me Looking forward to more testing!
Reactions: Revenant 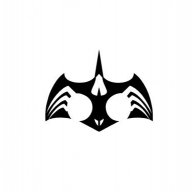 Before the pandemic, I installed an OEM GTX 1080 on my brother's computer. He's impressed.
Reactions: Revenant, rfarmer and TheAdministrator

confusis said:
Always wanted a 1080, was always out of reach for me Looking forward to more testing!
Click to expand...

Almost done with the 980Ti 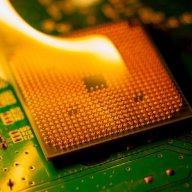 Great review! Much appreciated knowing I can throw this I'm my girlfriend's kid's PC and have it crush at 1080p. Now to find the stock cooler...lol
Reactions: Revenant and rfarmer
S

not to sound like an nvidia fanatic but in my experience fsr 2.0 is still a far, far cry from dlss. motion artefacting is awful with fsr. i find the two technologies hardly comparable in all honesty.

Nvidia GeForce GTX 980Ti in 2022. Can It Still Game at Ultra Settings?