We've been hearing whispers of NVIDIA launching its GeForce GTX 980 Ti, but according to WCCFTech, the company will be launching their new video card on June 2 at Computex 2015. The event itself will be livestreamed over Twitch, as you can see from the image above.

But what should we expect from the GTX 980 Ti itself? Well, it's based off of the GM200 core, the same core that powered the GeForce GTX Titan X, but we'll see 6GB of VRAM instead of the 12GB that the Titan X featured. But, this will include a drop in price from the $999 pricing of the Titan X. The GeForce GTX 980 Ti will feature a 384-bit memory bus, up from the 256-bit bus offered on the GTX 980 which will provide the new GM200-based card with 336GB/sec memory bandwidth. The Core Clock will be at 1GHz, while the Boost Clock will reportedly be set at 1076MHz. We should expect to see an 8-pin + 6-pin PCIe configuration, with three DisplayPort, one HDMI 2.0 and one DVI port on the back.
Click to expand...

The announcement, if not the release, is earlier than some had speculated. Anyway, the 980Ti would seem to be a great option for those who find the Titan X just a little too expensive
Click to expand...

Announcement, sure. Availability? Doubtful. Mostly to upstage AMD it seems.

I'd be inclined to agree, but on the other hand, the moment they announce the 980Ti is the moment they kneecap sales of the Titan X. So theoretically (at least), they would have an incentive to keep the announcement pretty close to the actual release date.

Won't have to wait long to find out, though!

While this will be a fast card and probably bring the prices of the GTX 980 and 970 down a smidge, I doubt this card has anything innovative to offer. So I'm mainly feeling meh towards this card. It's only reason for existance seems to be to take the spotlight from the interesting new AMD card while it basically is a better binned part. The next gen Nvidia cards seem to be much more interesting.

Phuncz said:
The next gen Nvidia cards seem to be much more interesting.
Click to expand...

Yes. HBM 2 and new process node finally. The GTX 280GTX Ti-X or whatever they call it will be a powerhouse.

Arctic Islands vs Pascal should be fun.

We may actually see availability in line with Computex, based on some current suggestions in the past 24 hours. Interesting.

Vittra said:
We may actually see availability in line with Computex, based on some current suggestions in the past 24 hours. Interesting.
Click to expand...

It seems to be another good ol' fashion ho-down with AMD and Nvidia flashing their ti... cards every other day. 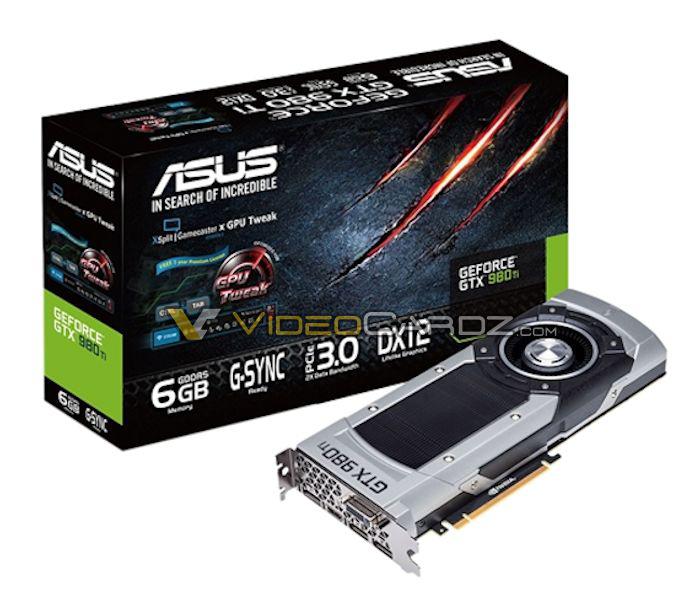 I'm curious how long Nvidia has been sitting on those binned chips, waiting for AMD to finally announce something.

http://www.hardwarecanucks.com/forum/video-cards/69442-gtx-980-980-ti-2.html
About 2 weeks ago reviewers on various forums were subtly hinting they had no 980 Ti on hand, which, to them, indicates no immediate retail availability even with an announcement. I can surmise Nvidia has communicated something very recently to reviewers based on this.

....and the reviews are out. Availability as of tomorrow. Best to restrain oneself and see what Fiji offers.

With the Titan-X having crippled double-precision and the 980Ti nipping at its heels in performance, who would buy the Titan-X over this?

Great price though, much more palatable than what the rumors were speculating.

I want the black shroud

Time to break out the spray-paint...

Aibohphobia said:
With the Titan-X having crippled double-precision and the 980Ti nipping at its heels in performance, who would buy the Titan-X over this?
Click to expand...

I'd be furious if I would have bought the Titan X and expecting to be king of the hill for a while.
Oh well, Nvidia putting out a cheap Titan 'x' will probably mean the AMD Fury is going to be a very fast card.

Phuncz said:
I'd be furious if I would have bought the Titan X and expecting to be king of the hill for a while.
Click to expand...

I mean, I joke about it the same way, but perhaps not. I'd be willing to bet that those who bought the Titan X have a level of disposable income whereby the three-month lead-time, and slightly better specs on paper (as well as that really nice shroud) make the premium worth it to them.

So, selling it a few months earlier for so much, and then getting the same GM200 "to the masses" for way less, could actually make a lot of business sense for nVidia. They can charge $1000 to the people who are fine with that, and then they can change $650 to everyone else, for something that's basically the same card/cost.


Phuncz said:
Oh well, Nvidia putting out a cheap Titan 'x' will probably mean the AMD Fury is going to be a very fast card.
Click to expand...

In performance-per-dollar the GTX 980Ti is basically on par (if not a tad better) than the GTX 980, so nVidia has done a solid punt here. AMD pretty much has to lead on perf/$ when they unveil Fury, but I don't think anyone is expecting otherwise... So what I hope they do is improve all the other tangibles (card size, appearance, temperature, power consumption) that makes nVidia appealing to so many. That would make the market quite interesting indeed...

I don't know if it's really the disposable income that is the factor for people buying a GTX Titan, I personally have no problem affording anything I would ever want but I simply don't want the Titan enough. Just like I'm skipping Z170 with Skylake, I'm much more interested in the X99 platform now.

If you look around, you'll find posts from people asking if they should sell the Titan X to get a GTX 980 Ti.

Nvidia markets their stuff well, people who shouldn't be buying that stuff often do. I'm sure much like with the original Titan vs 780 Ti, there are also people angry a card at a cheaper price performs nearly identically so soon after the Titan X's release... but really, it should have been fully expected this time around.

The original Titan was more interesting as a entry-level compute card. Titan-X is not though so now that the 980Ti is here there's not really any reason for the Titan-X to exist.