Josh Sniffen is the owner of NFC systems, a SFF design firm founded in 2009. With a lineage of products and designs including the NFC ArK and the S Series, Josh has a wealth of experience and knowledge, both as a system building enthusiast and modder, and as a vendor of ultra-portable SFF chassis and systems. Earlier this week, we had the opportunity to speak to Josh about his prior work, as well as his newest creation, the S4 Mini. Josh is set to demonstrate the chassis this Friday, while participating at PDXLAN 26.

Joshua Ramirez: Thanks for taking the time to talk with us! To start, I was wondering if you could elaborate on where your interest in SFF computing really started from, and how that led to you designing so many systems and cases.

Josh Sniffen: Well, many of my fondest gaming memories include a friend jabbing me in my rib cage with his/her elbow, as we attempted to claim victory with our console controllers. There’s something really special to me about gaming in the living room, and sitting next to the person you’re playing with, which is probably why I am an avid LAN attendee.

Anyway, that interest really overlapped with my other passion of experimenting with PC builds (and modding more generally), so when the first mini-ITX boards started popping up I immediately began to pursue my vision of the gaming ‘PC Console’. And my design direction with that concept, in terms of realizing that simple idea, was really quite radically different than that of the ‘mainstream’ HTPC systems of the day, which I felt didn’t encompass the spirit of what I was trying to achieve – namely, a solid gaming experience at TV resolutions that easily fit into a backpack.

Consequently, my first designs were never done from a perspective of developing a consumer product. I was obsessed wholly with the concept, and built the systems to be as flashy as possible for all the LAN events I would take them to. 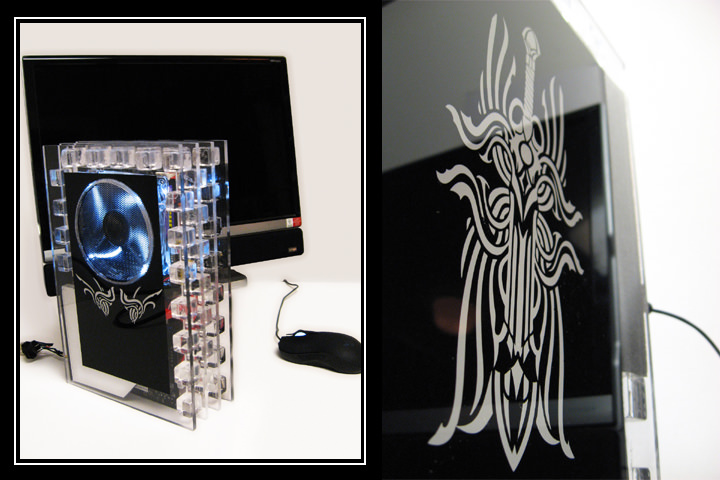 Still, even with that degree of focus, I wasn’t ever satisfied with my results, and kept trying to simplify and ‘compactify’ the hardware. It’s worth bearing in mind that, in 2008, finding a small form factor GPU was challenging enough, let alone one that was power efficient and robust enough to run games fluidly.  There weren’t many ITX options with PCI-E 8x slots either, nor were there many cooling solutions, or power options, or risers that were reliable. So instead of building monster rigs that crushed benchmarks, I found myself spending much of my time and money trying to find “just robust enough” components, that sipped power and didn’t melt when sticking them in boxes the size of a ream of paper. 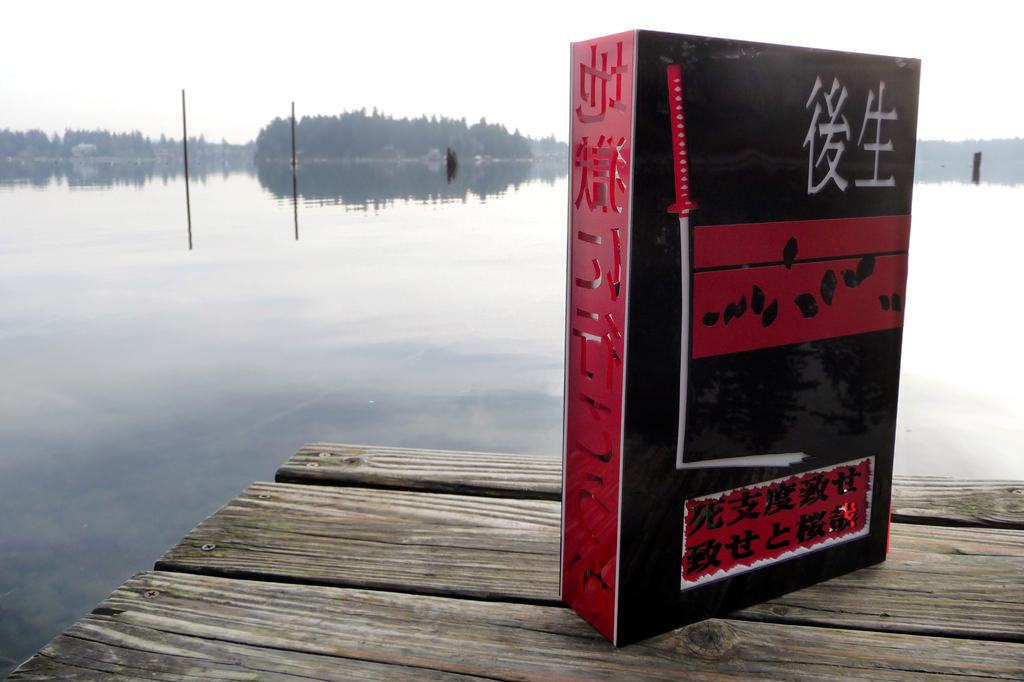 JR: How did your ‘hobby’ transition from making singular builds, to creating production-oriented designs?

JS: Well, for something like an entire year I did pretty much nothing but experiment with hardware configurations, orientations, mountings, and so forth. I ultimately made hundreds of models in SketchUp, while playing around with ideas. And eventually, once the market began to offer palpable hardware options for Ultra-SFF PCs (and I began to close in on a U-SFF design), I soon felt that I had figured out the best possible layout of components. 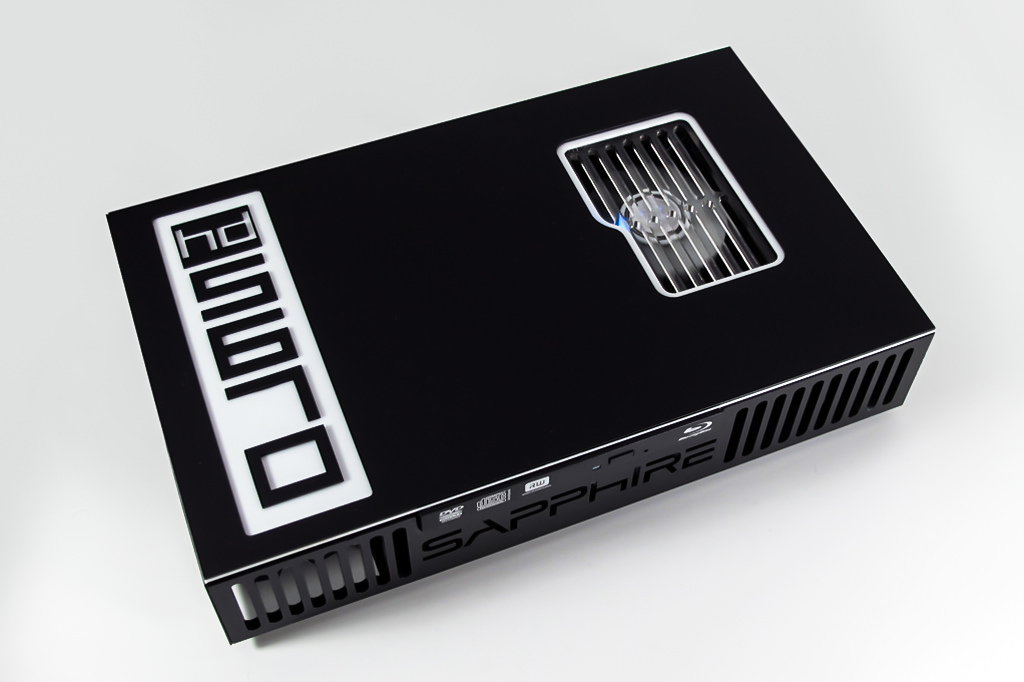 So I think it was the combination of developing market support for PC components, positive feedback on my U-SFFs, and a closing in on my perfect layout, that ultimately made me decide to turn my concept into a production chassis. 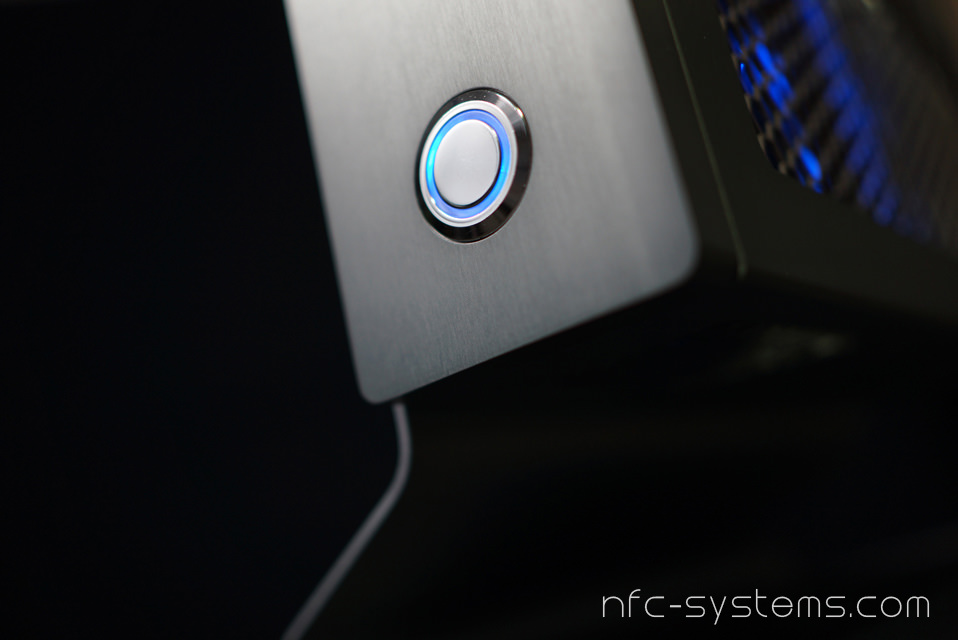 JR: Once you had made that choice, what were some of the challenges you faced in terms of bringing that idea to reality, and to market?

I quickly learned that turning an idea into something manufacturable, even at a small scale, was intensely more complex than submitting plans to a fabricator for a one-off.  My U-SFF chassis was aimed at high-end HTPC enthusiasts, but even so, my first production run cost me over $700, per chassis! Every single one I sold was at a huge loss – even those that I managed to subsidize with entire system build-outs. 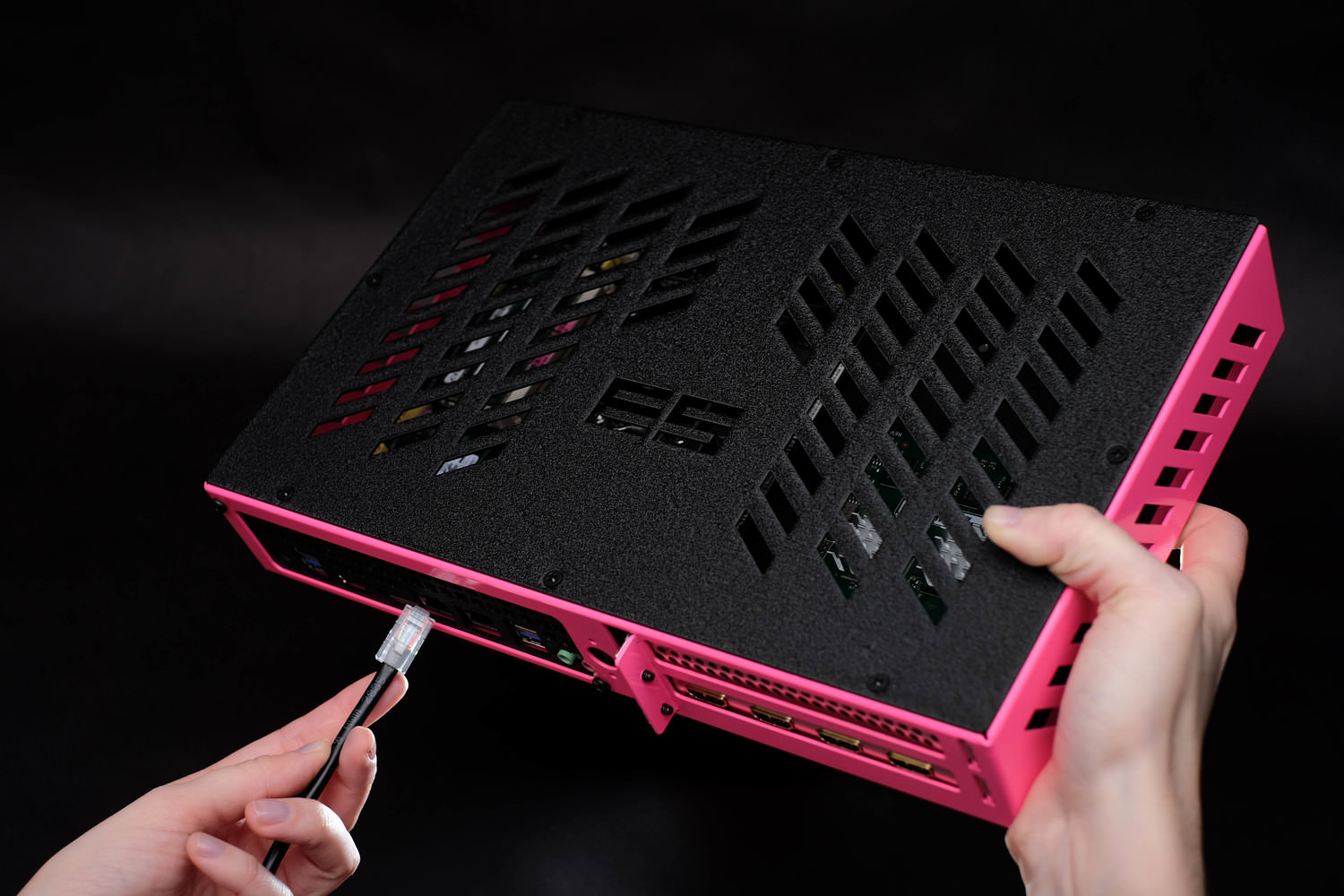 At this point I was (expectedly) broke, and to complicate things, Dell had just privately demoed their Alienware X51 at CES. Having been falsely accused of being a copycat in the past, I dreaded the idea of releasing my product behind Dell, only to have some in the community feel that I was taking cues from them. A shallow concern, I know, but it got to me, even if not to the point where I’d call it quits.

So I went back to the drawing board, and after almost 20 more prototypes, I had a next-generation version ready. This new chassis, which I called the S3 Mini at the time, dropped the CNC milled billet, tossed the titanium hardware, and went without the elegant curved edges of my previous chassis. I (in effect) traded those features out in order to design one of the sturdiest and lightest PC cases on the market, thanks to the special aluminum alloy I used (present in many high-end bike frames and aircraft parts). I also took color customization to the extreme, by donning show-car quality powder coating options. 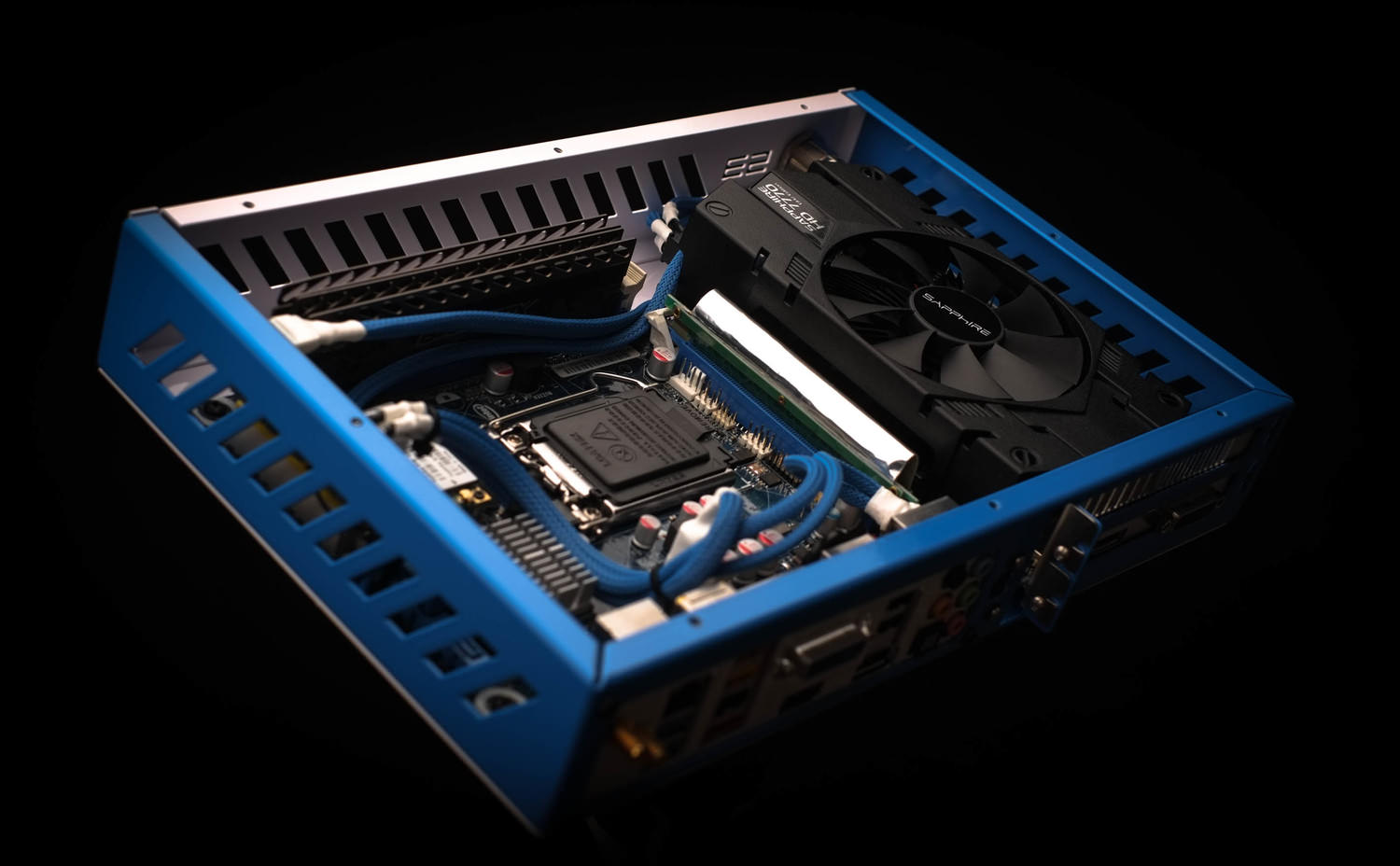 Happily, I found that this new design was met with great enthusiasm from the SFF community, but even with that support, it was challenging to sell the units I had made beyond the trickle of email inquiries I fielded – which was a real problem, as I had over 100 of them! I eventually understood the problem to be multifaceted: firstly, the cases were simply expensive to make, as I was limited to performing a relatively small production run. Secondly, I was having to deal with legal issues surrounding the IP and ownership of my design. And finally, a small design flaw was eventually uncovered, that made a few double-slot GPUs difficult to install – which, of course, was the central feature of the S3 Mini to begin with. 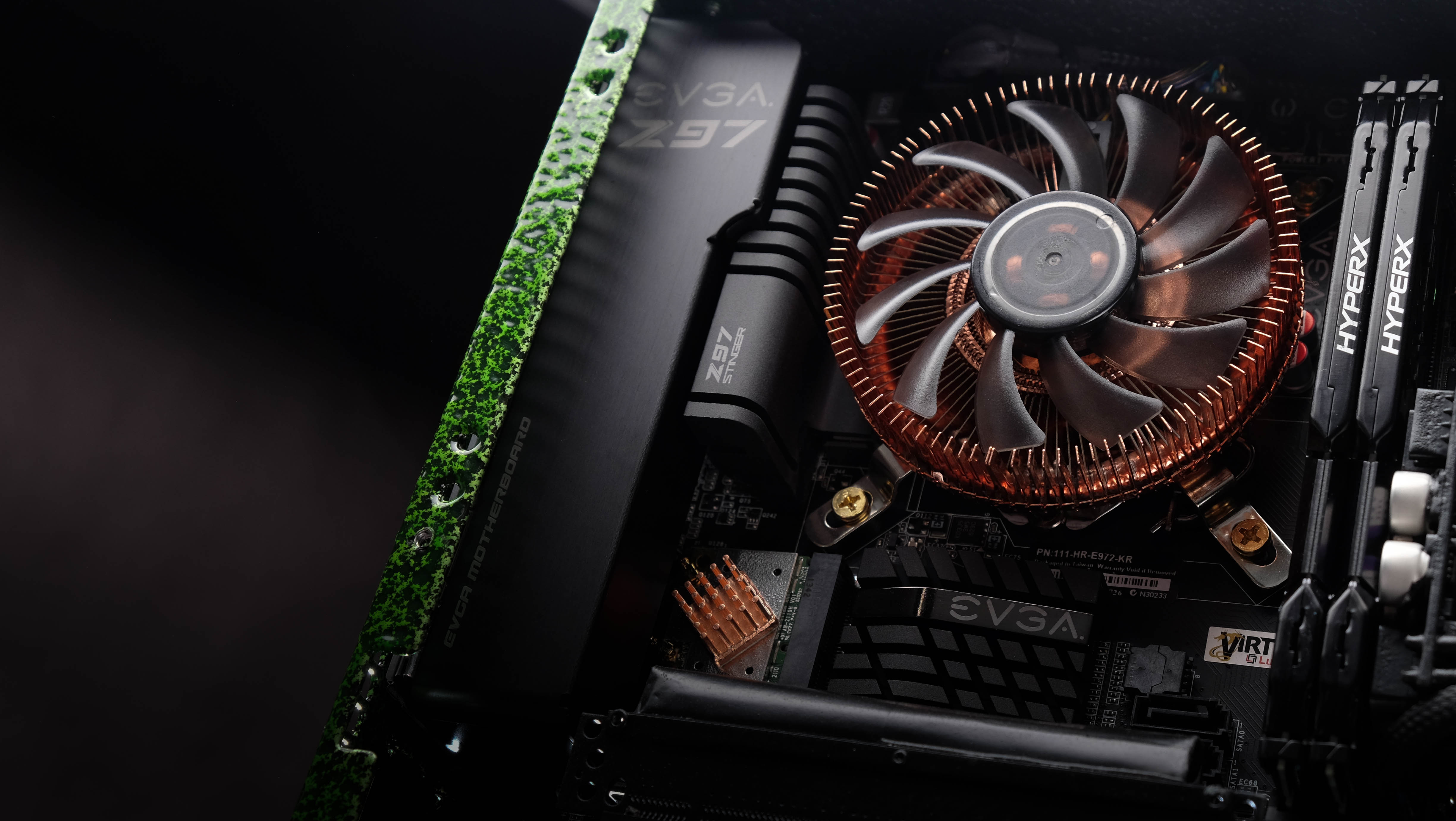 JR: I take it you were able to overcome these challenges eventually, though?

JS: Well, luckily, I was able to sell or use every S3 chassis at cost, as well as solidify my ownership of the design. But I still had not achieved my goal of offering an ultra-SFF chassis for retail sale, ultimately, so I once more went back to the drawing board.

I increased the volume of the chassis slightly, but that enabled me to dramatically increase hardware compatibility, and provide many options with respect to DC-DC PSUs. I also built the interior to act as a skeleton, rather than a box, in order to make installing components much easier. I put in many more mounts for various fan combinations, and even liquid cooling. And the updated materials I incorporated now use the thickest, sturdiest aluminum on the market by far, inclusive of the 5mm thick, wrap-around bezel. All the while, I’ve been able to keep production costs the same when compared to the last chassis (S3 Mini).

I also had to source a manufacturer that understood my demand for precision and quality, which has set the release back several months, but I now firmly believe that I’ve finally been able to create the chassis I set out to make several years ago. I couldn’t be happier to finally share the S4 Mini with SFF enthusiasts, who, like me, are excited to elbow their friend’s on the couch all over again! 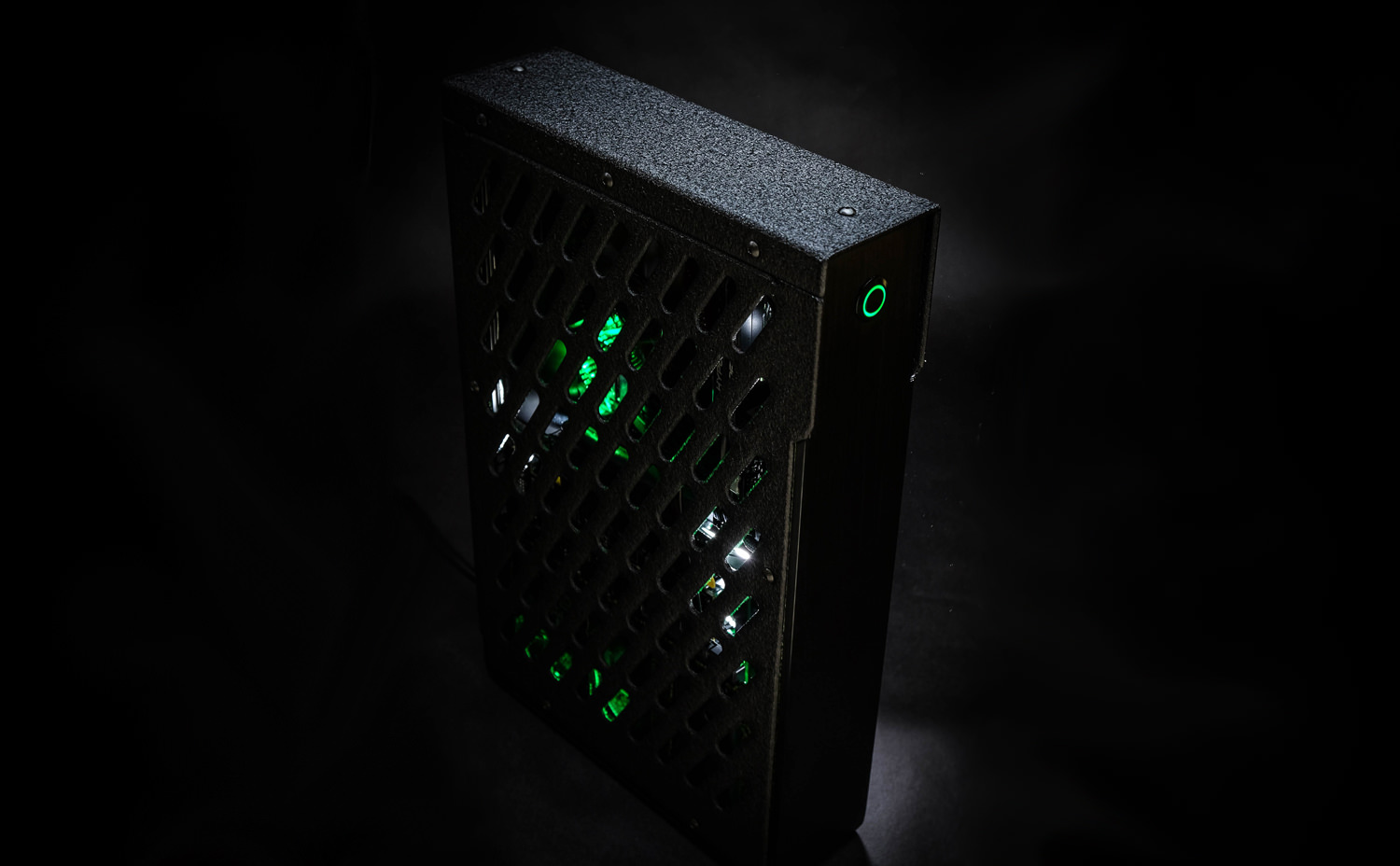 JR: It’s a fascinating story, and a really fantastic case. Thanks so much for talking with us, and good luck at PDXLAN!

For more info about Josh Sniffen and his awesome designs, you can check out his website at nfc-systems.com.