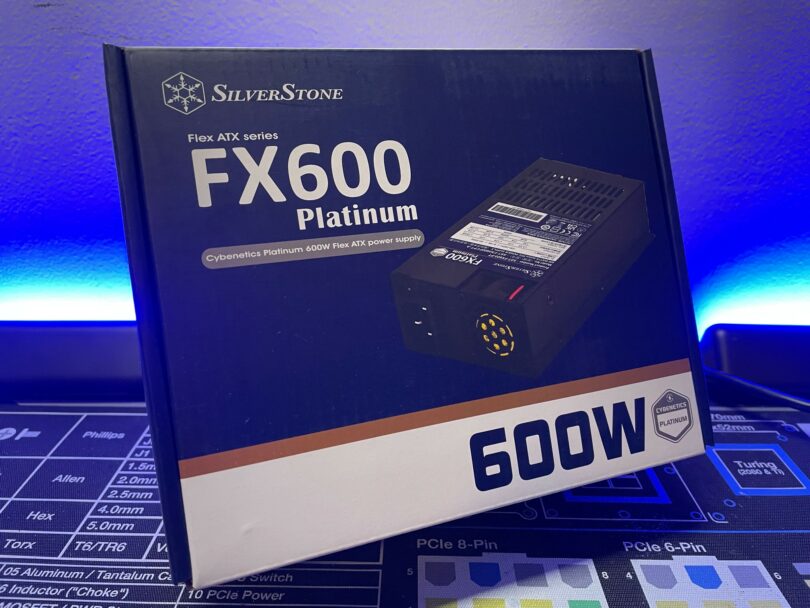 Flex ATX power supplies have gained popularity in the never ending hunt for smaller and smaller PCs in the SFF world. Many though are industrial and server PSUs that will leave you deaf with their fans, or under powered for a high-end GPU.  Silverstone has taken notice and produced FX600 aimed squarely at the sweet spot of SFF.

SilverStone sent us this PSU as a review sample. They issued no requirements, expectations, guidance, or demands for the review. They just sent it. As always, I will commend companies that show integrity in their review samples and SilverStone has always shown the highest integrity with SFFN and myself.

The box is a standard Silverstone affair. Inside you find the SX600 PSU wrapped in bubble wrap, screws, and power cable. You get two paper manuals with the unit. The first is a small multi-language manual, while the second includes all of the power ratings and specifications. The spec sheet is a good inclusion, though I would like to see something other than bubble wrap for future models.

The FX600 is a 600 watt unit that supports up to 50 amps on the +12V line. This rating is at 40C per SilverStone, and matches their SFX 600 watt unit. The unit is measured by Cybernetics for efficiency, and Silverstone provided documentation that indicated 90% efficiency at 20% load, 92% efficiency at 50% load, and 89% efficiency at 100% load.  The unit has a 40mm fan that Silverstone claims has a 20dBA minimum, but that doesn’t ramp up until about 500 Watts.

The exterior shell has a nice matte black finish to it. The stickers are dark blue and white. While the high contrast nature of these stickers are easy to read, it will be something that builders will have to take into consideration if they’re going for a color theme. The unit has a good heft to it, and feels well put together.

Cables are not modular. They are covered in a relatively flexible plastic and come with numerous zip-ties already attached. The cables are fairly lengthy which can be problematic for a SFF build, but that will depend on which case you use. I would like to see future models have some sort of modular design so SFF users can run custom cables. The unit includes a 20+4 pin motherboard connector, and an 8-pin and 4+4 pin CPU connector. For GPUs you get two 6+2 connectors. A surprising number of SATA and Molex connectors are included at 4 and 3 respectively. You also get a single floppy connector.

To do a quick function check of the FX600 I attached it to our CPU cooler test bench. This consists of an Asus Z390I ITX motherboard, Intel 9900KF CPU, and GeForce 730 passive GPU. I ran Prime95 small FFT while simultaneously running Furmark 4K because I have no mercy on hardware. This generated about a 250 watt load, and enough GPU heat to burn my fingers because I just HAD to touch that passive GPU cooler to see how hot it really was. Spoiler alert: Furmark made the GPU cooler really, really hot.

Booting up the FX600 surprised me with a very mild and reasonable fan noise. It was audible at 2 feet on an open bench, but quickly faded into the background. The Noctua A12 fan I ran during Prim95 was louder than the PSU fan. What didn’t fade into the background was the rapid clicking noise of either the fan bearings or coils. It sounds similar to a cable very slightly tapping a spinning fan blade.  This was present at all times, and I noticed a similar issue with the SX1000 PSU that SilverStone sent as well. However, as I type this, I’m listening to some quiet music on speakers and can easily tune this sound out. The sound is also highly dependent on angle so once I get this into a case and positioned other than two feet away from my left ear, I expect it to be far harder to hear.

Now let me be absolutely clear: This is a still an incredibly quiet PSU for a Flex ATX design. SilverStone has done a very good job taming the noise issue. As a reviewer, it is my duty to be nit-picky and I will pick those nits. I owe this to the readers who trust what I write, and to SilverStone so that they get data they can take back to their engineers for future development. No one benefits from an echo chamber.

That said, most Flex ATX PSUs I’ve heard sound like a cross between a dentist drill and a Boeing 737 taking off. The mere fact I can hear some possible bearing clicks or coil whine is amazing for this form factor. Moreover, I’ve been running the 250 watt load for over an hour as I’m typing this, and it’s never gotten louder. The FX600 itself is just warm to the touch. This is a really solid indicator that this PSU might become a go-to for Flex ATX builds where noise can be an issue and GPU power is needed.

And that will wrap up our First Look and impressions of the SilverStone FX600. I’m genuinely excited to get this into our upcoming Densium build and put it into real world use where I think it’s going to excel. But first, it has to survive our PSU torture rig. Check back soon for the full review.