When it comes to cooling, fan thickness seems to be a standard that manufacturers almost never stray from, with the vast majority of coolers going with 25mm fans or bust. However, with the Scythe Slim Silence, and now the Prolimatech Ultra Sleek Vortex 12, that fact has slowly been changing as the performance of thin fans improves, and enclosures begin to necessitate such tighter profiles – indeed, with modern fan motors and blade designs, good performance is still possible even after shaving 10mm (a full 40%) off!

Today, then, we are looking at Prolimatech’s own slim fan offering, the Ultra Sleek Vortex 12. Available in black and white, this fan offers many builders the ability to fit a fan in areas where a full thickness fan simply wouldn’t, be it a case vent, air cooler, or radiator. 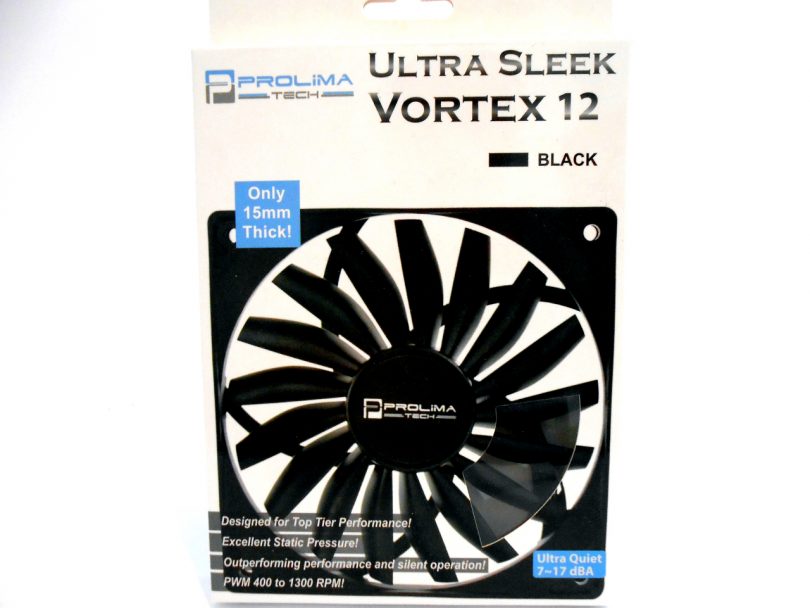 Components as simple as fans tend to have the packaging to match, and the Prolimatech Ultra Sleek Vortex 12 (a bit of a mouthful!) comes in a suitably simple and slim box. Prolimatech’s clean blue, black and white theme is evident, and throughout the box, the fan is marketed as being able to perform toe-to-toe alongside high end competitors – a claim we will test in a moment! 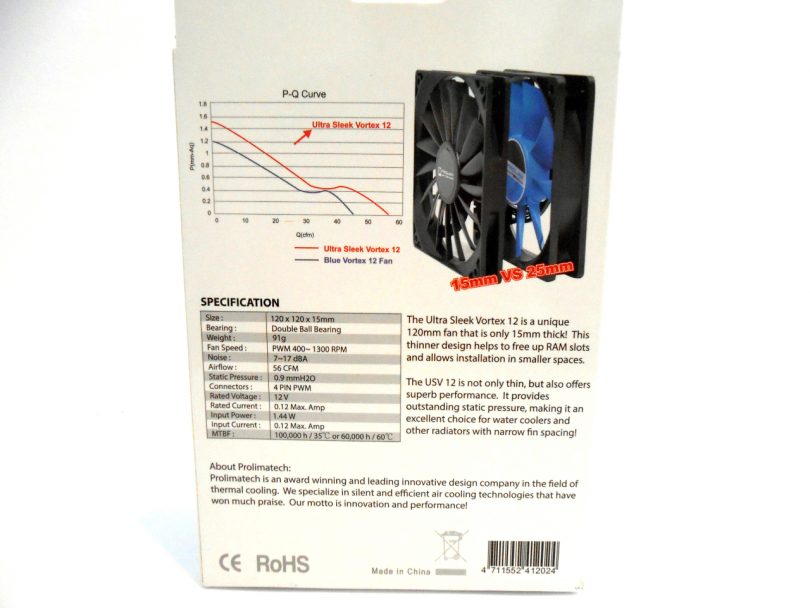 The rear of the box lists all the specifications, as well as a fan curve diagram showing that the fan produces higher static pressure than Prolimatech’s own 25mm thick Vortex fan. 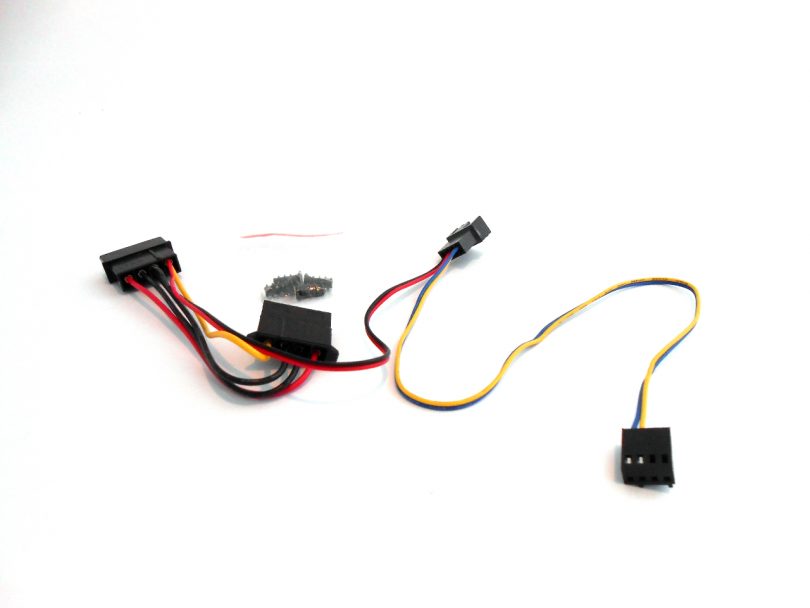 The fan also comes with simple accessories, included in the box: four standard (but black) fan screws, and a fan power adapter. The adapter takes 12V from a molex plug, and powers the fan.

PWM control of this can be achieved via the PWM connector at the end of the adapter, but to be honest, the PWM end of this adapter confuses me – in most cases, a fan being controlled via PWM from a motherboard socket will be fed 12v by the board anyway. 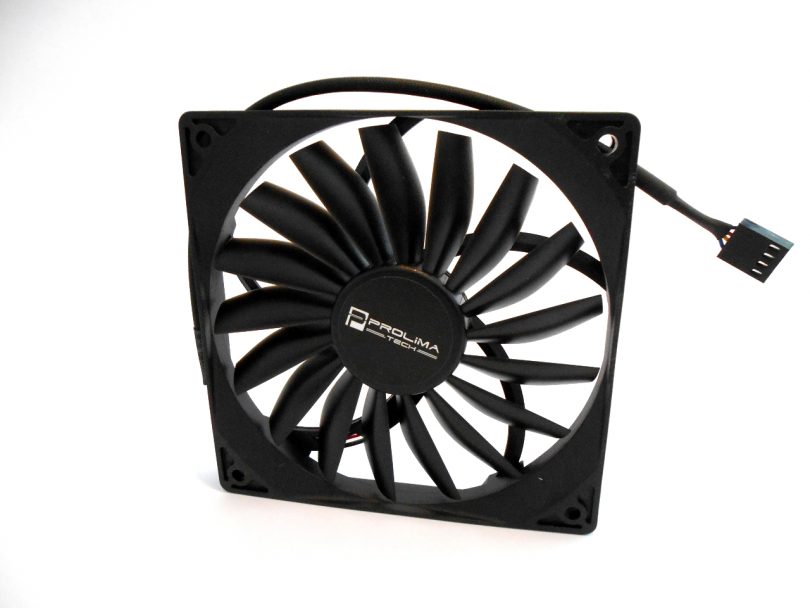 The first thing you notice very quickly when looking at the Ultra Sleek Vortex 12 is the odd blade design – most case fans use fewer, fatter blades, with a less aggressive canted edge. It seems this particular design is Prolimatech’s way of increasing static pressure, but the visual effect is interesting in its own right, as the opposing straight and curved edges lend the blades an unusual shape. 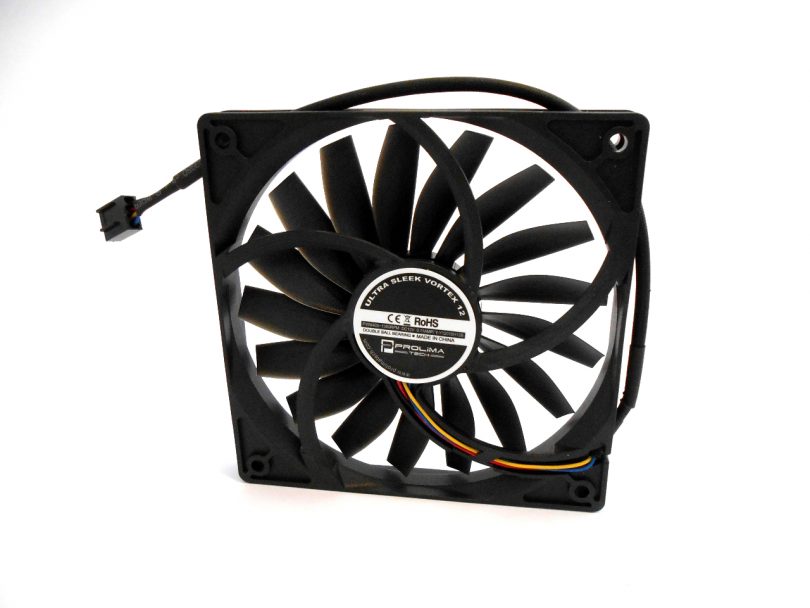 The rear of the fan shows a similar style to Scythe’s Slim Silence fan. The fan power cables expose their colors here as usual, but from the fan to the 4 pin plug, some nice silicone sleeving is used, much like Noctua products. Your case interior will be thankful (if only the adaptor enjoyed a similar treatment).

The fan cable is 25cm long from fan to connector. 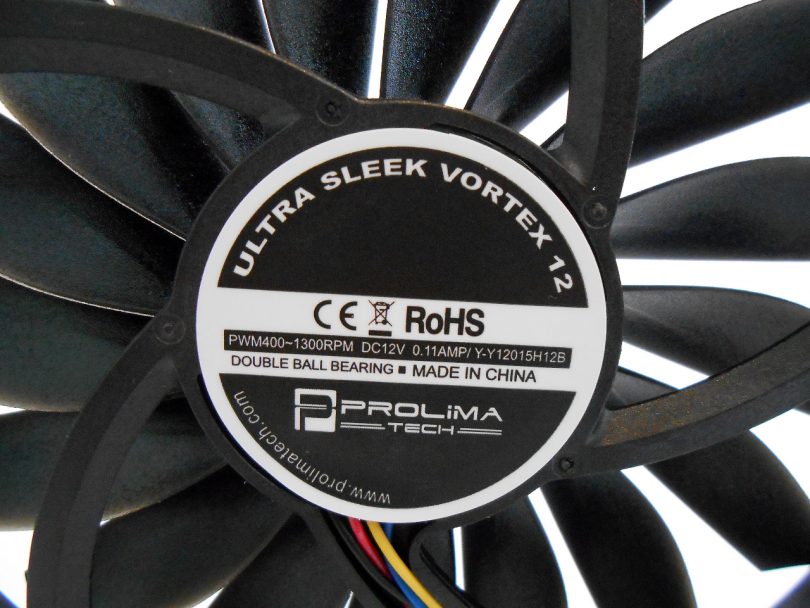 Zooming in on the fan hub, we can see the unit’s primary specs. The ones here vary slightly from advertised specifications, however – the sticker shows 0.11A current, whereas the spec list shows 0.12A. Not major, but notable.

A great entry into the slim fan market, the Ultra Sleek Vortex 12 is a solid product from Prolimatech. Through some basic testing, I found that this fan does indeed outperform its main competitor, achieving a 2 degree drop over the Scythe Slim 120 mm fan on the Scythe Big Shuriken 2. This is a great achievement, not only because it’s still a slim fan (albeit 3mm thicker than the Scythe), but also because it’s not a huge price increase over the competition.

-A valid competitor to the Scythe Slim Silence, and superior when using on air coolers and behind fan filters.

-Motor hub doesn’t get overly hot, a flaw we have seen on other slim fans

-Hard to find in some areas

This cooler is currently available for around US$20 on Amazon.com