In part one of this article, we tore down and set up the ASRock DeskMini GTX1060, a Micro-STX based barebones system that comes with a MXM format GTX1060 6GB GPU. In this second part of the review, we will look more in depth, to gain a deeper understanding of the Deskmini GTX/RX Z370, and see what it is capable of.

As a recap, the ASRock DeskMini GTX/RX Z370 is a well designed Micro-STX barebones system, that in part 1, gained my recommendation, and my conversion from M-ITX to Micro-STX for my personal preference. The design of the platform, as well as the chassis, is a sea change from what we are used to in the SFF market. The bold jump from regular PCIe to the MXM format is something that is exciting for us – something different in a world of clones.

Unfortunately, this does come with a limitation, that being the scarcity of MXM format graphics cards in the retail market. At present, the DeskMini is a system you buy with the GPU pre-installed, not as an upgrade later on. We may be seeing changes in the market that will change this, but for now, the issue remains. If you are looking at the DeskMini product line for your next gaming system – spend the money on a better graphics card option now (GTX 1060, 1070 and 1080 options are available) and get a better CPU later. The CPU upgrade will be much less painful for you.

This article will be less structured than the last, but hopefully you will be able to glean some important information from it!

Cooling a system this size requires some sacrifices – either in noise, or lost performance by way of limited turbo modes. ASRock defaults the DeskMini GTX/RX to a mid range of this – turning off turbo modes in BIOS, (“Max non-turbo”) but setting the fans to silent mode. Willing to test this further, I tried various combinations of the settings and found the best to be a combination of “Turbo” enabled as well as standard fan control on the MXM GPU, and standard fan control on the CPU. When changing to the Noctua NH-L9i cooler, I was able to drop the CPU fan control to a “quiet” setting.

If it wasn’t for the liability aspect (although somewhat diminished now that Intel does not bundle coolers with a lot of their processors), I’d highly recommend that ASRock promotes the use of a quality aftermarket cooler, such as the aforementioned Noctua NH-L9i, or the NH-L9x65, Cryorig C7, Zalman CNPS2X, or other similarly regarded coolers. The user experience will be somewhat diminished with the use of the Intel cooler.

A major caveat here, however, is that the cooler compatibility is less straightforward on the STX platform than on the regular ATX based (including M-ITX) boards. Whilst on regular boards, coolers such as the Noctua NH-L9i will generally fit in all four orientations, on the ASRock Deskmini GTX/RX Z370, it is limited to two. In the other orientations, the cooler conflicts with rear IO ports. Your results may vary. If you have a Z370 DeskMini and have installed an aftermarket cooler successfully, let us know in the discussion thread linked at the end of the article! 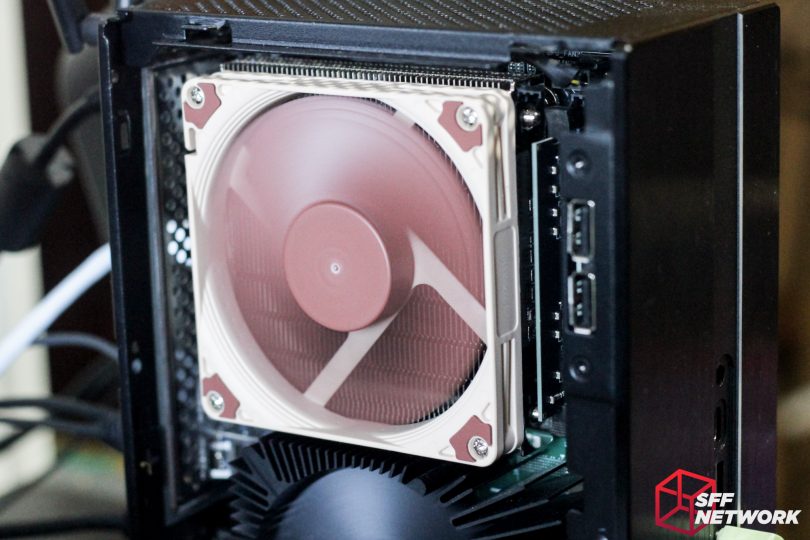 Following on from the above, reducing system power consumption is as important to our readers, as it to the environment. #ecofriendly. In all seriousness, our dedication to low power consumption, small desktops is a positive for the environment, and our personal spaces. To help reduce the power consumption (and thus heat output and cooling noise!), we can undervolt and underclock our systems to perform to just the level we need, with no waste.

A caveat: As with any over and underclocking, your results may vary, and changing settings in BIOS or using Intel’s XTU utility (or indeed, any overclocking tool) may result in warranties voided and sad panda broken components. Be careful, and don’t go nuts unless you are happy to risk it all!

I could not find any functions within the UEFI environment to adjust the processor voltage (only the RAM, oddly), so I had to resort to the use of Intel’s XTU utility to achieve my goals. Alongside XTU, I threw an unrealistic load at the system again, Prime95 Blend mode.

In the first test, I left Turbo on, and threw 0.05V decreases at the system. How did it react? Note that at this point in testing, the Noctua NH-L9i had taken up permanent residence on the CPU, and was running in “silent” mode.

Intel and ASRock’s power design comes into play here, with no real power consumption decrease as we drop the VCore. However, the max CPU speed cranks up at each step to fill in the available wattage budget. At -0.2V, the system locked up. So, in essence, a quick tweak with Intel’s XTU software nets a performance increase with no extra power consumption and heat output. Nice.

Next, I turned turbo mode off, to see if we can gain any real power savings.

A serious power saving is to be had by turning turbo off – albeit with a performance decrease. Intel specifies the i7-8700 has a regular TDP of 65W, with a turbo wattage of 81W – which goes a long way to explaining the 30W difference between the runs. As I decreased the voltage, the wattage dropped as expected.. mostly. Unexpectedly, I noted a wattage increase at -0.10V versus the previous step, which is strange. The following -0.15V step had a drop, albeit with a wattage result above the -0.05V step. I am not sure why this could be.

After all the above, I decided on a turbo mode on, -0.1V undervolt for every day use for my system. Your system may perform differently, so take these results with a grain of salt.

The system as reviewed came complete with a GTX 1060 6GB, it would be silly of me not to game on it. In fact. I found myself returning to more demanding titles, such as GTA V, a welcome change from my regular workstation featuring a Sapphire R9-270X, which I found to struggle a bit in the higher end games. As I don’t have a “regular” board to truly compare this system with others (i.e, with matching processor and equivalent memory), I can only give you indications as to how this system performs under certain loads.

The system performs exactly how you’d expect a Core i7-8700 and GTX 1060 system to perform – very well. Games such as GTA V, Minecraft (with shaders installed!) and Euro Truck Simulator ran very smoothly at 1080p, enabling me to crank the settings up to maximum in every way. As we test more systems in the future, I will come back here and add in a performance graph versus other systems!

Early on in the DeskMini development process, there were concerns in the community that due to the unique form factor of the GPU, and other modifications to get this all to work, that a custom driver or one provided by the MXM card’s OEM, would be needed. I can report that this is not the case, and that in the case of this GTX 1060 equipped model, the standard NVIDIA desktop GPU driver works perfectly.

Apart from the above, every component installed correctly on both a fresh install, as well as my “Frankenstein’s Monster” Windows 10 install – one that has seen more systems than I can count. All drivers (except the GPU driver, because the standard MS one is… not good) were found in the Windows driver repository, with no Googling needed.

I made the decision to move my general workstation to the DeskMini GTX/RX Z370 with the GTX1060 to really see how the system holds up in long term use. Not only am I using it for content production, such as writing articles and editing photos, content consumption and gaming are also major uses for the system. In short, the system has convinced me to downsize from my M-ITX build in an NCase M1 to this platform. As a lover of all things SFF (duh!), going that one step smaller, without losing performance, is a big win for me. In fact, I have some project ideas around the platform for the near future!

Speaking of workstation use, I foresee a large market for these systems in CAD and design systems – albeit configured with Quadro or Radeon Pro cards. Also, SFP+ (on a mezzanine card or daughterboard) for configurable and upgradeable networking would be a major addition for a “pro” version, enabling system integrators and enthusiasts alike to run 10GBe, fibre, or whatever network tech they desire.

Overall, my experience with the ASRock DeskMini GTX/RX Z370 with GTX1060 has been very positive. I believe ASRock is on to a winner with the STX based platforms, offering unparalleled performance density for what is a surprisingly low price considering the current GPU scarcity. Intelligent design of the platform has led to one that is upgradeable, yet more compact than the typical ‘L’ or right angle form factor of PC hardware of the past umpteen years.

The risk taken by ASRock in developing and continuing a new form factor is not small – it’s not like the board layout can just be copied and pasted from a larger form factor, significant design and development is needed for the boards, cases and other componentry. From a tech media perspective, it seems that ASRock is the only motherboard company really pushing the limits in the SFF space at present – we aren’t seeing quite the level of inventiveness from other manufacturers.  I’d like to see this change sooner rather than later – however I applaud ASRock for pushing forward, not just with the Micro-STX and Mini-STX form factors, but with other products, such as the X299e-ITX/ac we reviewed late last year.

Should you buy a DeskMini? As always, it depends. Does the format suit your use case? Is it within budget? Do the sacrifices in cooling or the massive power brick negatively affect usage? Weigh up the pros and cons and see for yourself if the Deskmini GTX/RX Z370 is a good choice. However, if you do decide to purchase, you won’t be disappointed. The quality, performance and design are definitely impressive.

What are your thoughts? Join the ongoing discussion here.