August 25 Update: Tom’s Hardware was told incorrectly and they’ve updated their article. The maximum slot power will continue to be 75W as it is currently with PCIe 3.0 but the total allowed power could maybe increase. The extra wattage will still come from PCIe power connectors on the card like it is today.

Tom’s Hardware had the opportunity to chat with Richard Solomon, VP of PCI-SIG (the group responsible for the PCI Express standard), about the upcoming PCI Express 4.0 standard. The new standard is still a work in progress but they’re expecting to finalize it by the end of the year.

Check out the article for all the details but the two main takeaways is that the bandwidth doubles, from 16GB/s with 3.0 x16 to 32GB/s with 4.0 x16, This is great news for SFF because one constant headache for really small cases is the tendency of GPU makers to put their PEG power connectors on the top edge of the card, increasing the necessary width of the case. The AMD Radeon Nano bucked that trend and put the power connector on the front edge of a flagship card but then AMD regressed with the RX 480, the reference version of which has the power connector back at the top.

We’ll just have to wait and see, while the spec will be finalized in the relatively near future it will still take a year or two for motherboard manufacturers to implement it and for the new standard to become ubiquitous. 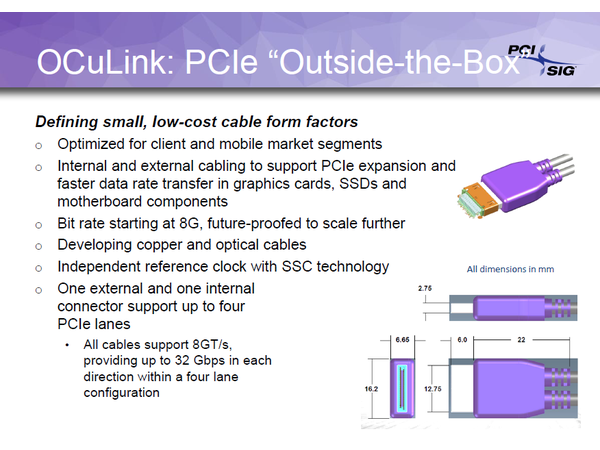 One more thing real quick, there is an external cabling standard called OCuLink that has been in the works for some time. It is a x4 cable, currently specced for PCIe 3.0 but this slide suggests that there’s room to scale up to PCIe 4.0 in the future. If it ever sees the light of day it would be a huge boon to those building external GPUs boxes so they would not have to rely on the availability of Thunderbolt 2/3 connections to do the same thing.