Noctua, a premium player in the cooling market, arrived at Computex 2017 with something new, something revised, and something just a bit… different.

Jakob Dellinger and the Noctua team have been tirelessly working towards a new standard in cooling, continuing work on their next generation A series fan. This 120mm fan has been a major project for Noctua, requiring the Austrian company to invest in significant equipment, from acoustic imaging tools to a plastic formulation not yet used in the PC world. Liquid Crystal Polymer is an interesting material, similar to kevlar in that the fibres are very organised throughout manufacturing. This enables higher strength products made with the material, which avoid deformation after prolonged use. This is especially important when we look at the upcoming A series fan’s primary feature, an 0.5mm blade tip to frame clearance. 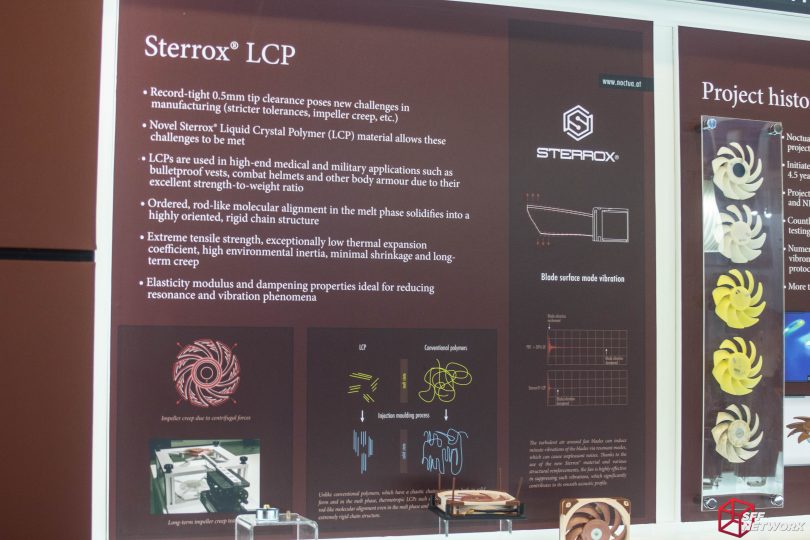 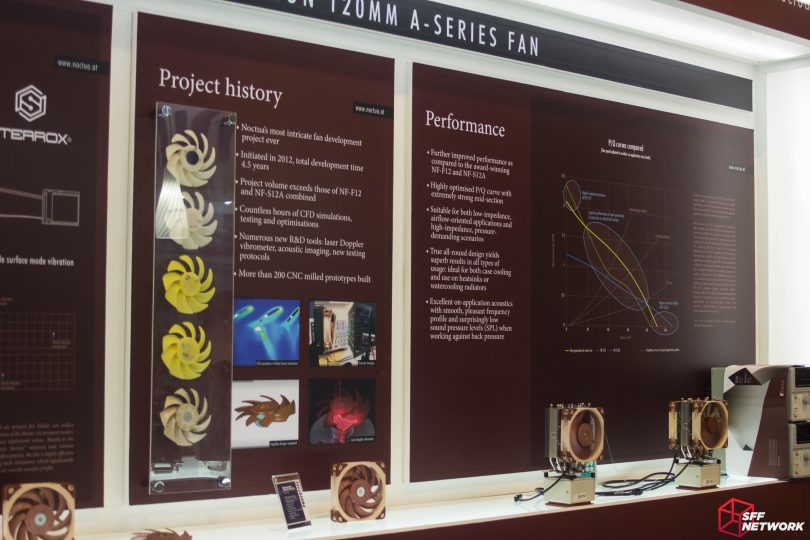 Such tight tolerances enable a significant increase in performance, due to the reduced backflow through the gap separating the rotating blade tips and the fan frame. If you’ve ever placed a running fan flat on a surface, you may have noticed airflow counterintuitively coming back out from the fan – this is the air sneaking back past the fan blades in high static pressure situations. With the tight blade clearance in this new design, Noctua has shown that this can be greatly reduced, which is a significant boon for densely packed air and water cooling contexts. 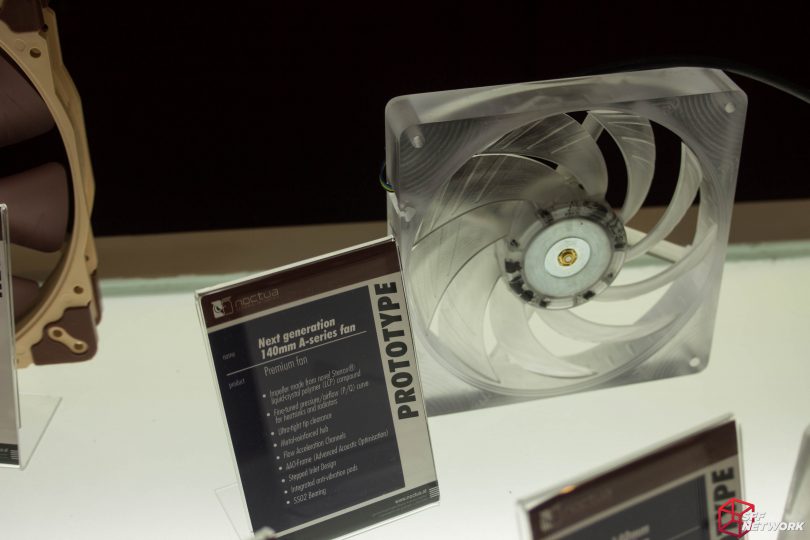 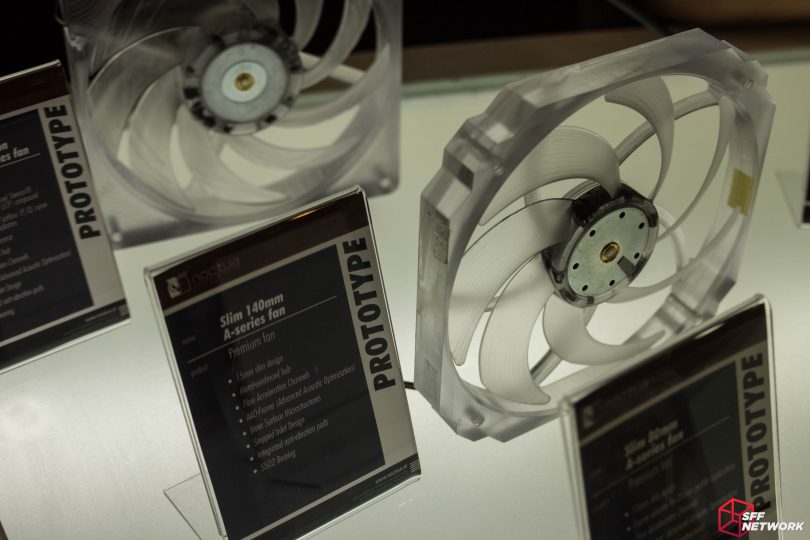 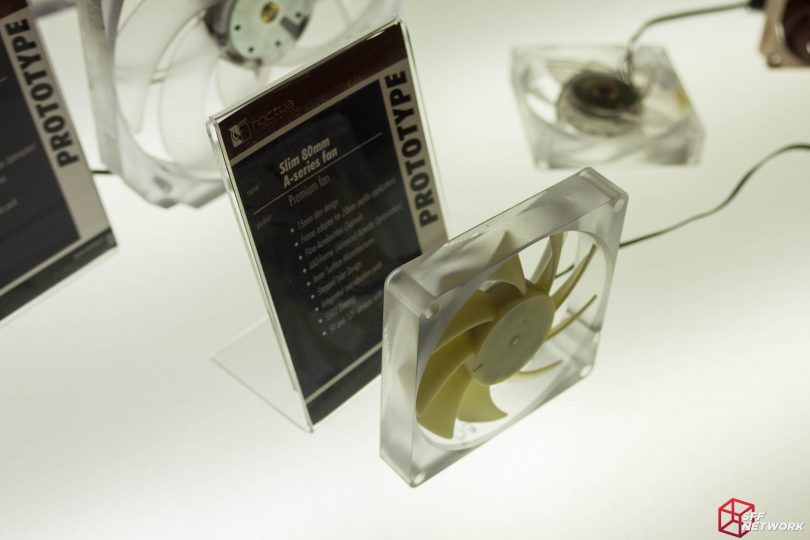 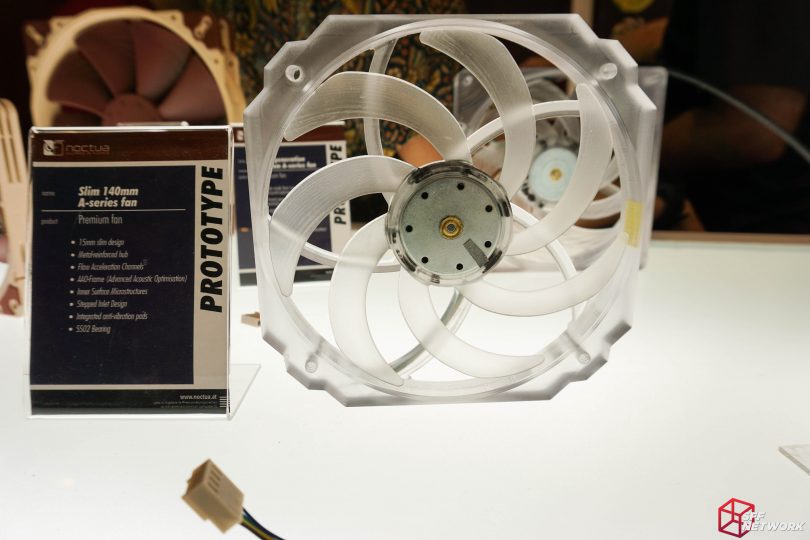 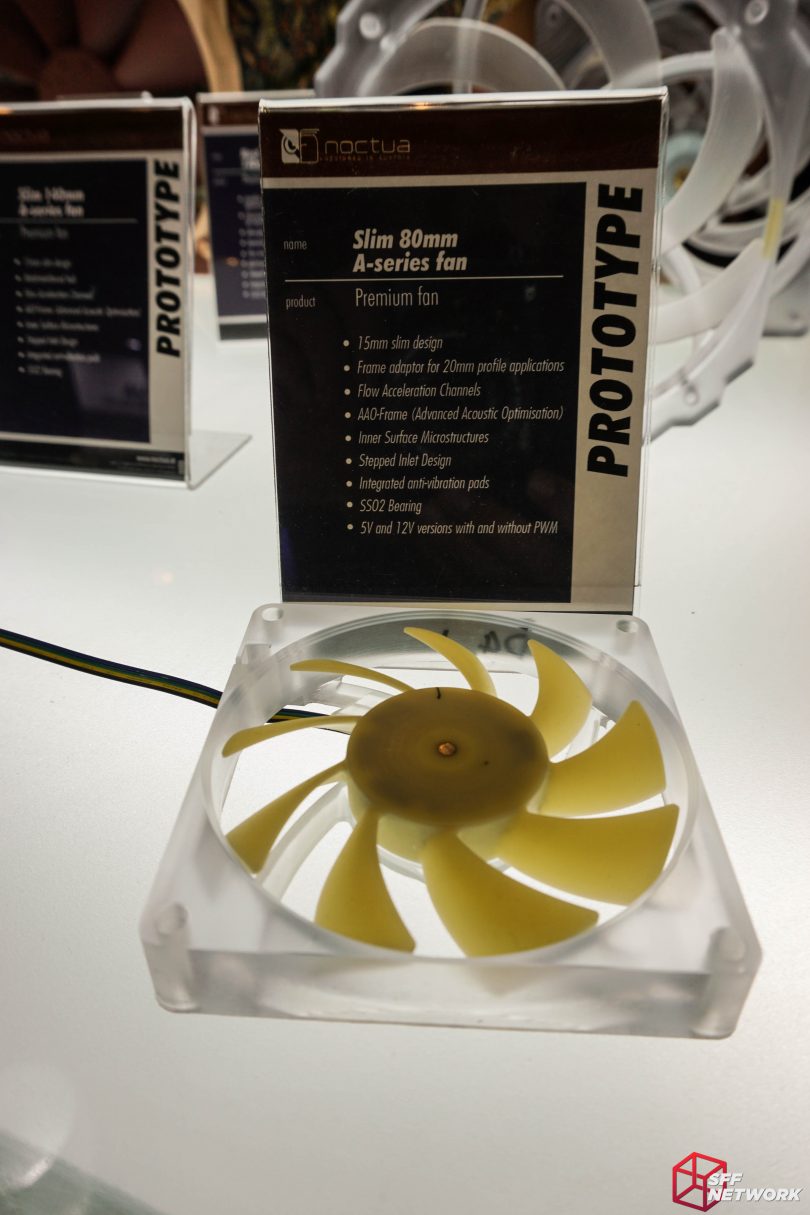 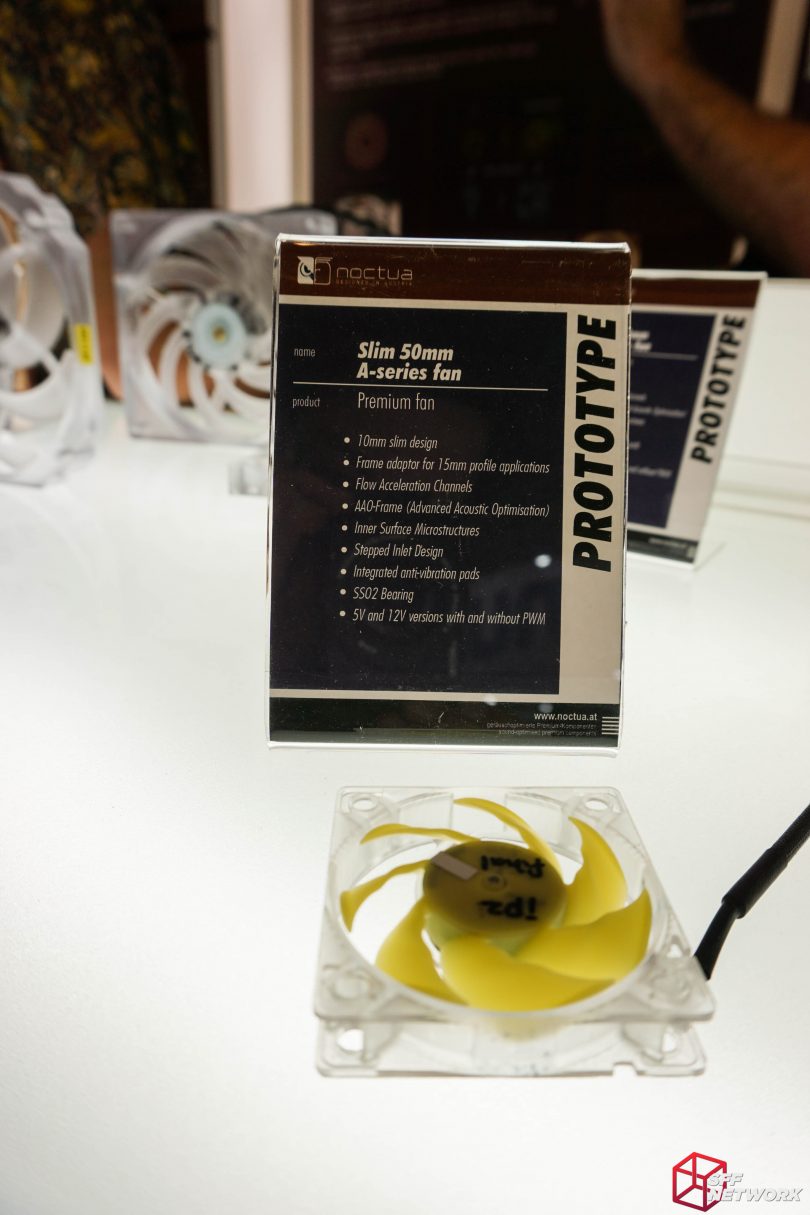 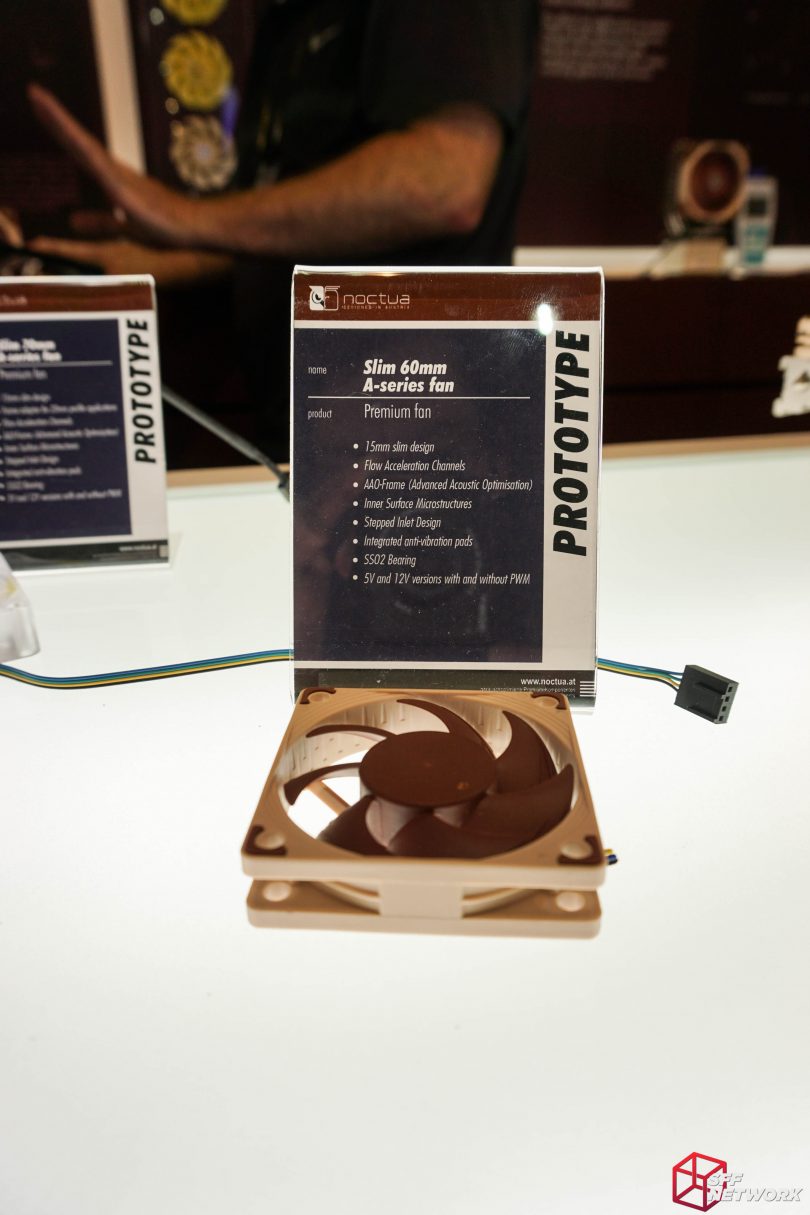 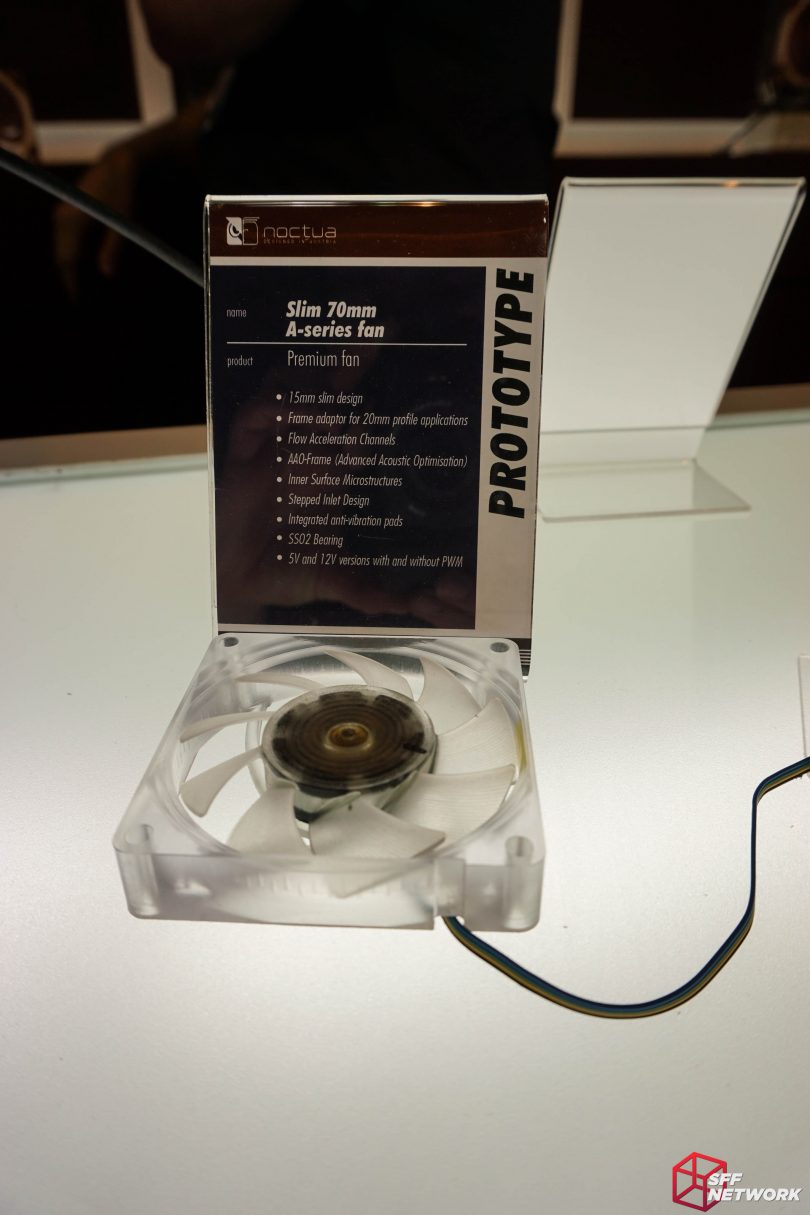 Also in the works: more slim fans! 140mm, 80mm, 70mm, and 50mm slim fans are in development, and we were able to see prototypes primarily made from CNC’d materials. Each fan is in varying stages of development, but we can expect at least the 140mm unit by the end of 2017.

With AMD’s Ryzen ThreadRipper on the way, Noctua has also created new coolers for this massive socket. Due to the absolutely gargantuan integrated heatspreader and socket of AMD SP3, an entirely new design had to be formulated for these coolers – existing Noctua baseplates are simply far too small to effectively contact the ThreadRipper’s IHS. 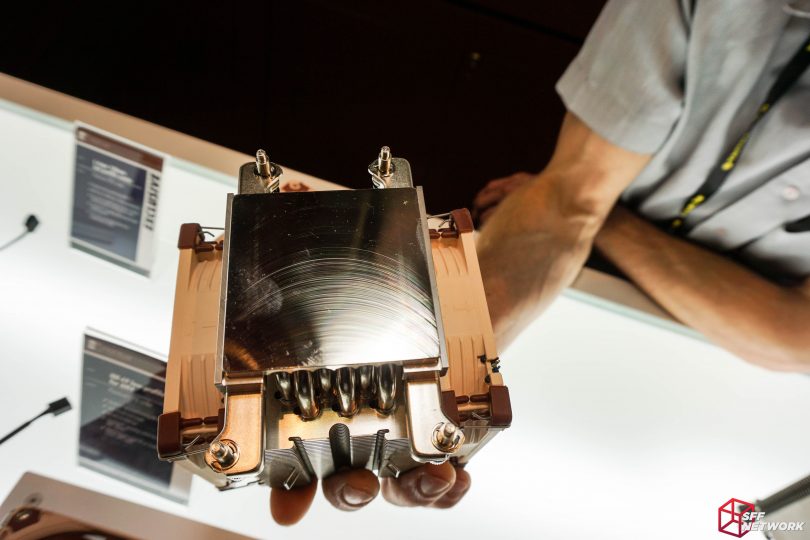 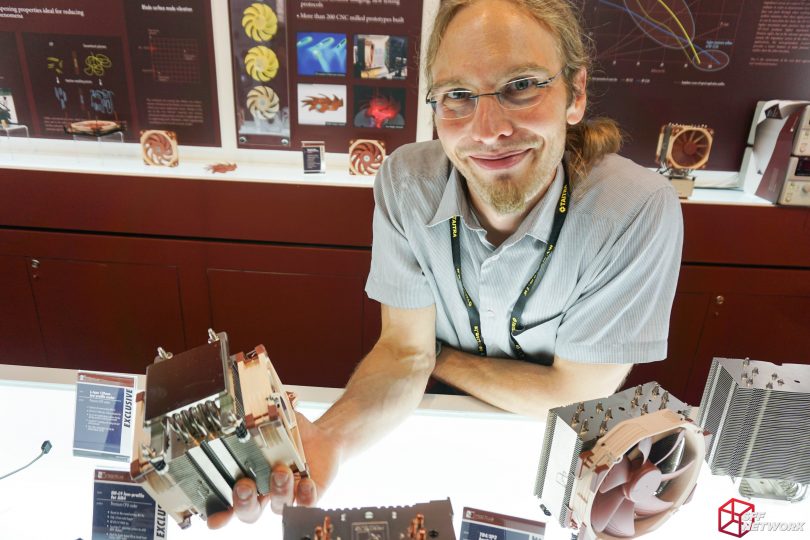 For scale, this is a normal sized human, also known as Jakob, holding the cooler.

And a word on Noctua’s active noise cancellation technology; Jakob has told us that the ANC tech has been furthered, but delayed. As Noctua has focused on the new A series fan, it was deemed prudent to wait until this product was ready, and then apply ANC to the new, higher technology fan for better (and non-redundant) results. Soon(TM) doesn’t apply here, though, for we can expect Noctua’s ANC technology… “eventually”. 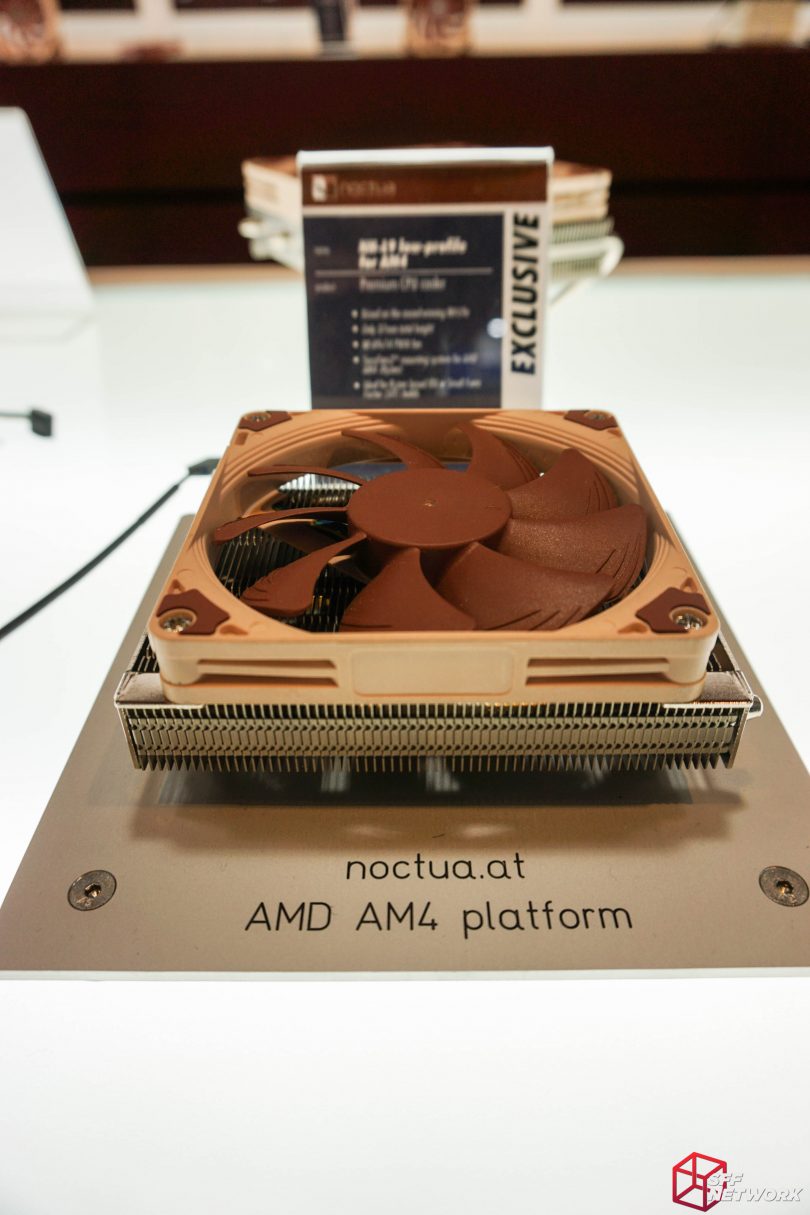 Of course, AM4 made an appearance, with a special AM4 edition L9a cooler at just 37mm tall. In addition, Jakob confirmed that there is a standalone AM4 L9x mounting kit available to owners of the coolers. Both the L9i and L9a can be adapted to the new socket, which is awesome news! 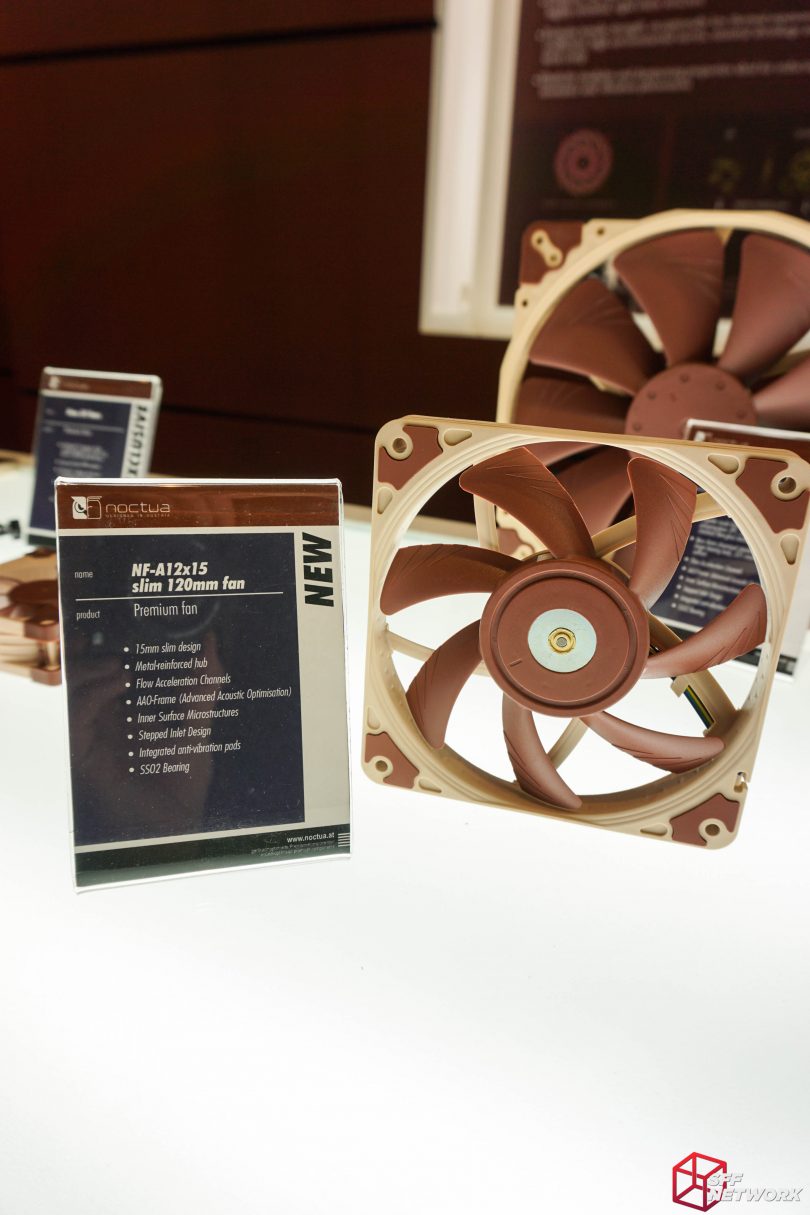 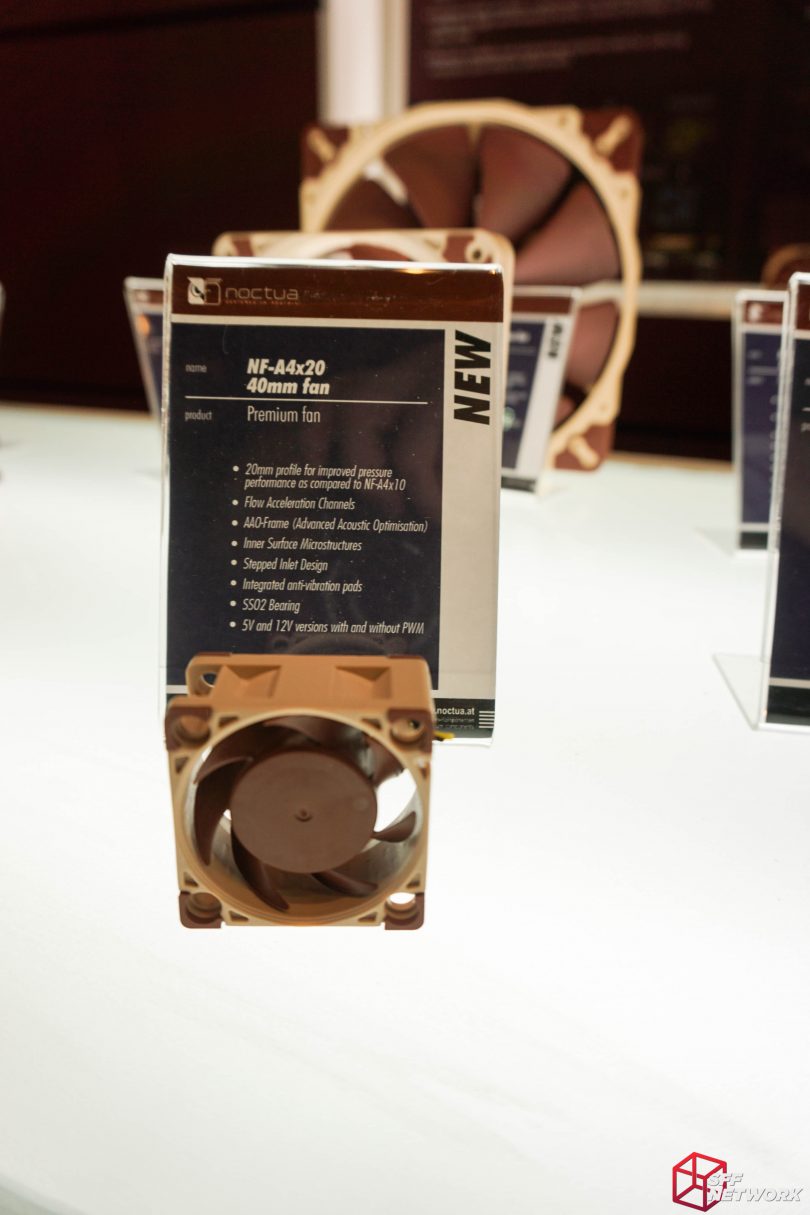 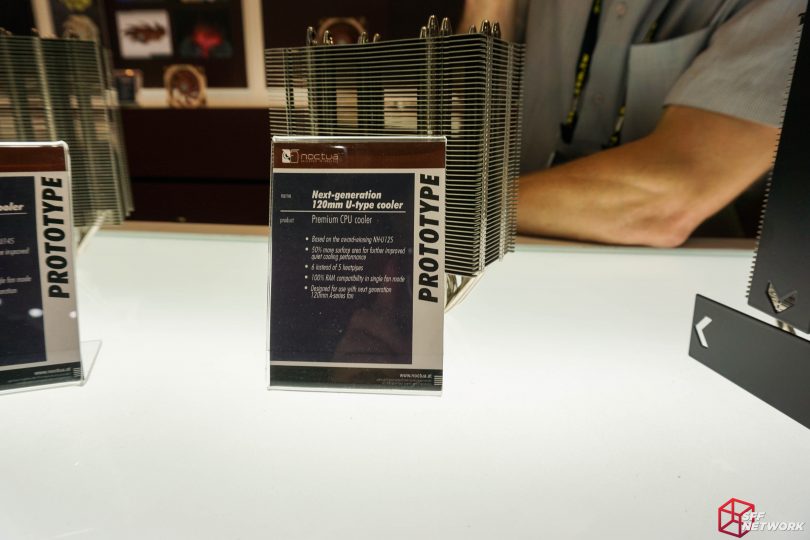 Finally, a few prototype coolers were on display, all new versions of the U series coolers, with deeper fin stacks for added cooling. Noctua’s move towards offset towers to ensure RAM compatibility is evident here, as all the prototypes had good RAM clearance from what we could see.

Thoughts? Leave them in the forum here!

SFF.N depends on community members like you to stay online! Consider a one-time donation to support the site, or take a look at our monthly supporter subscriptions for exclusive perks and benefits!
Total: 252 (members: 39, guests: 213)