FlexATX has grown in popularity for shrinking down SFF builds beyond what even SFX will allow, and I’ve seen several cases in development in the forum that make use of these server form factor power supplies. So here at Computex 2017 I made sure to scout out all the big FlexATX manufacturers to see if they had any cool new products that could be suitable for consumer applications (i.e. not deafeningly loud).

Unless otherwise noted, all the following FlexATX are 150mm and have the -12V rail.

So in alphabetical order:

This is a brand I’m not familiar with at all, but I stopped by their booth and took a look. 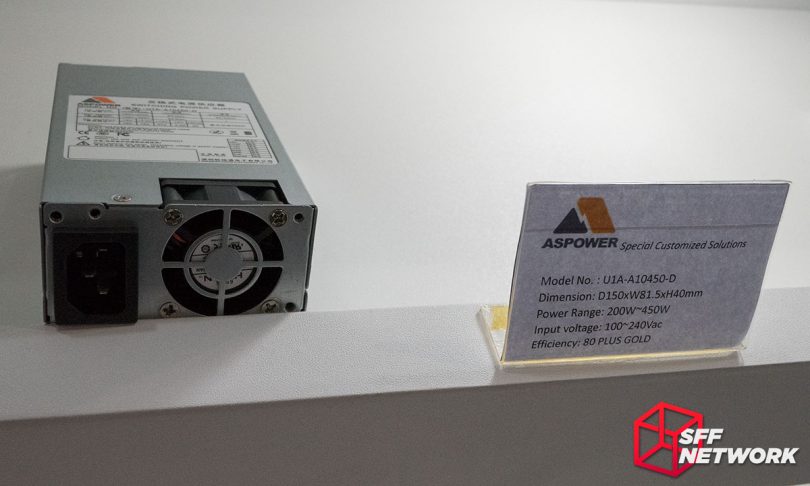 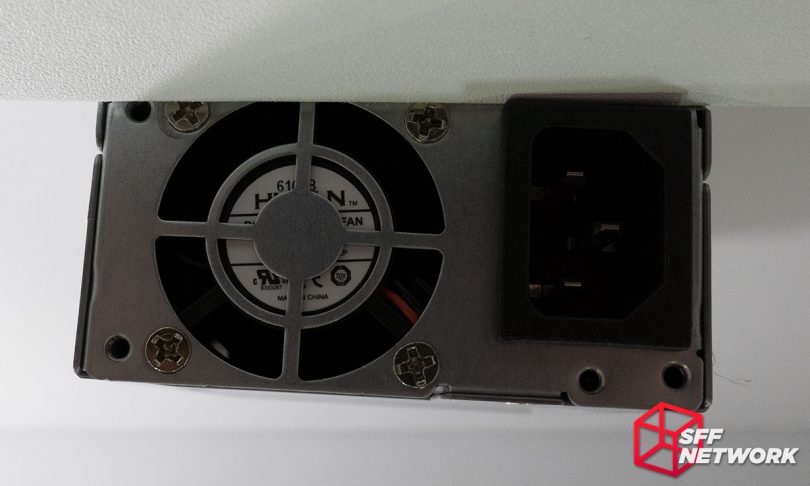 I don’t recognize the fan brand but it’s 25mm thick. 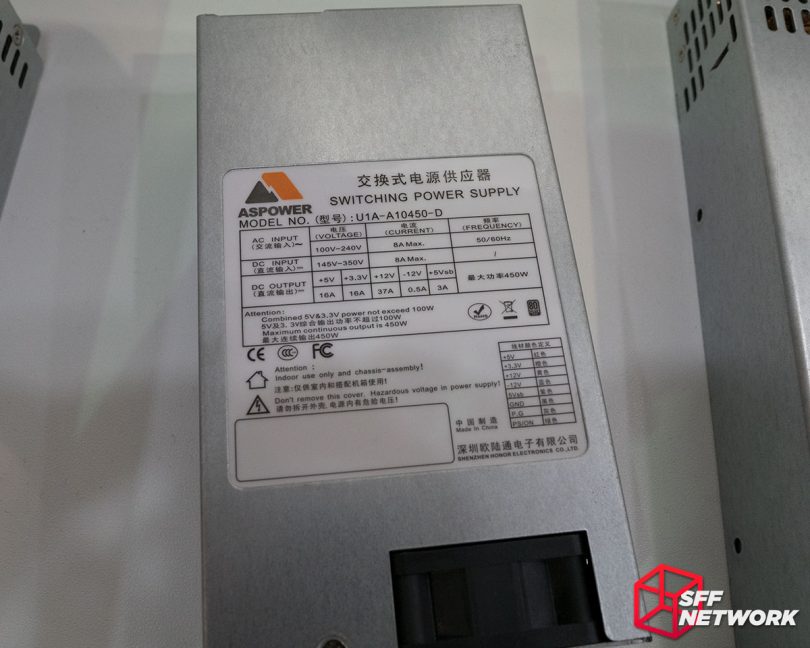 This features a single rail for the 12V that can do the full 450W alone.

There are many booths on the floor of Computex for industrial PSU companies, many of which I have never heard of before. This one caught my eye as I was wandering around because they were promoting their new line of 80 PLUS Titanium-rated power supplies. PSUs with Titanium efficiency is not something you see everyday due to the engineering difficulty so that’s what piqued my interest.

Some digging shows that Compuware is the OEM for some Supermicro PSUs, so that’s a good sign that perhaps these people know what they’re doing. 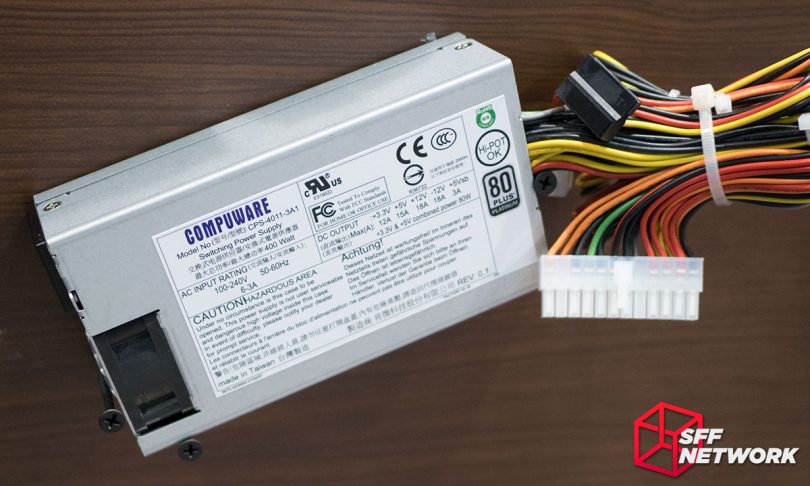 Compuware mostly focus on the redundant PSU market for servers, but they had this 400W Platinum-rated 150mm FlexATX: the CPS-4011-3A1.

Update: After clarifying with Compuware, there are two 12V rails of 18A each but no -12V rail. 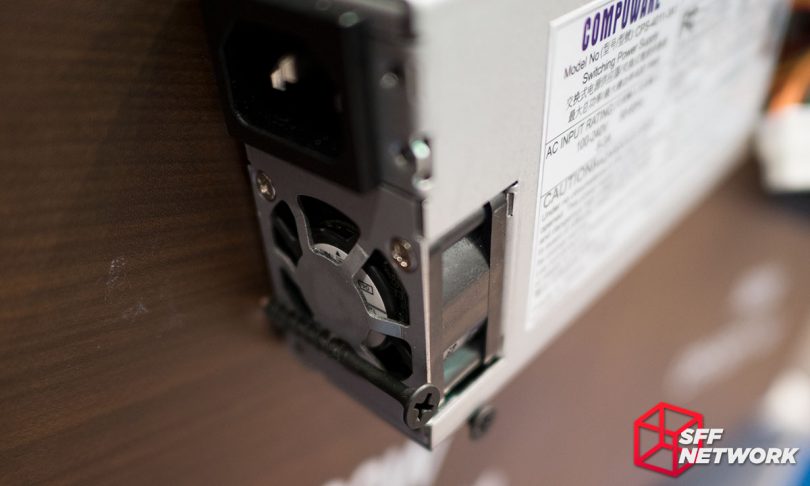 I’m not sure what brand it is, but the fan is 20mm thick. 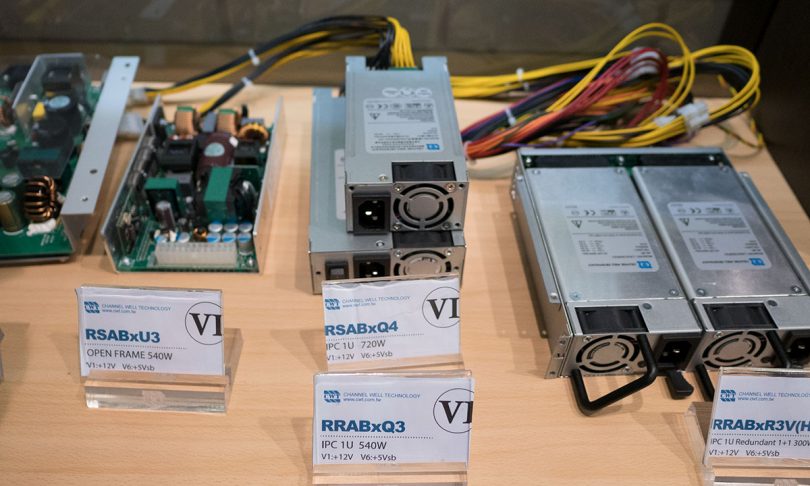 The bottom plaque goes with the FlexATX unit on top. It is 540W and looks like it’s 150mm long but features a modular connector at the end of the unit that faces up.

Edit: I swung by the booth today since it was bugging me. 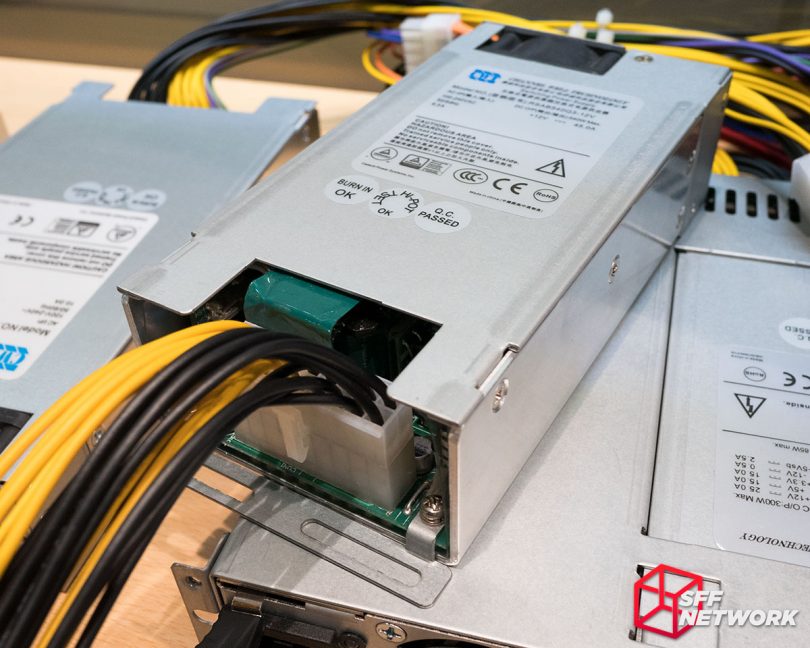 Here’s how the modular connector looks. 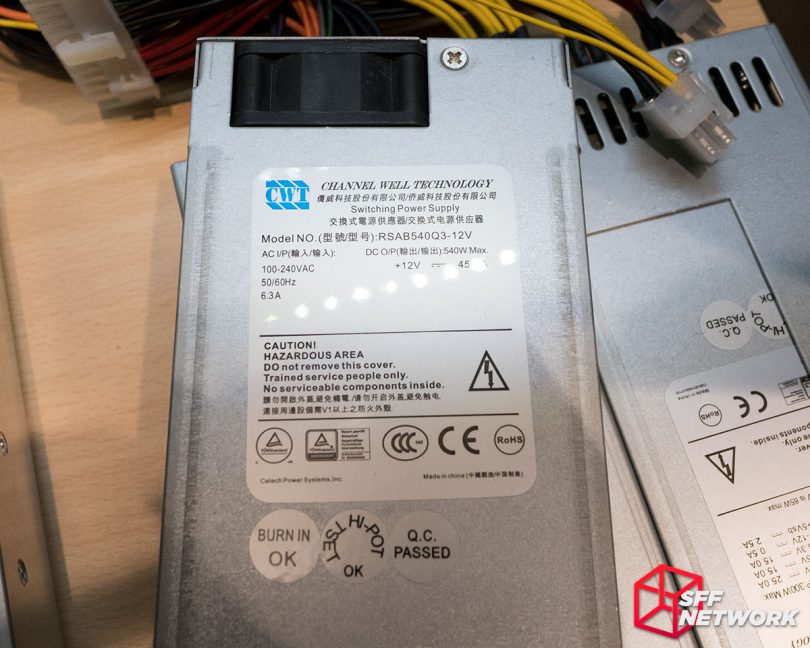 The display unit is indeed of the single-voltage type, but the CWT rep I spoke with said they do have a version with the standard ATX rails. Surprisingly it keeps the modular connector too. 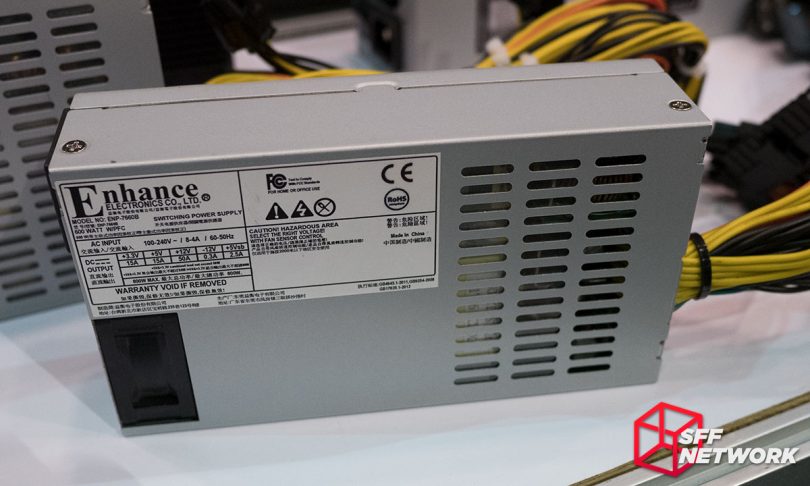 This is the Enhance ENP-7660B. It is a 600W with Platinum-rated efficiency and features a single 12V rail according to the label. 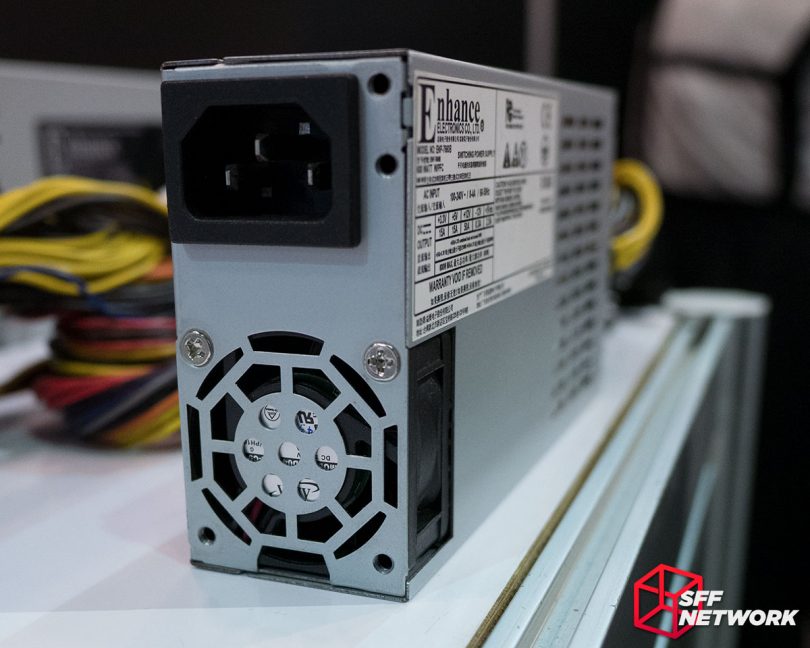 Cooling is provided by a 20mm thick ADDA fan of some sort. 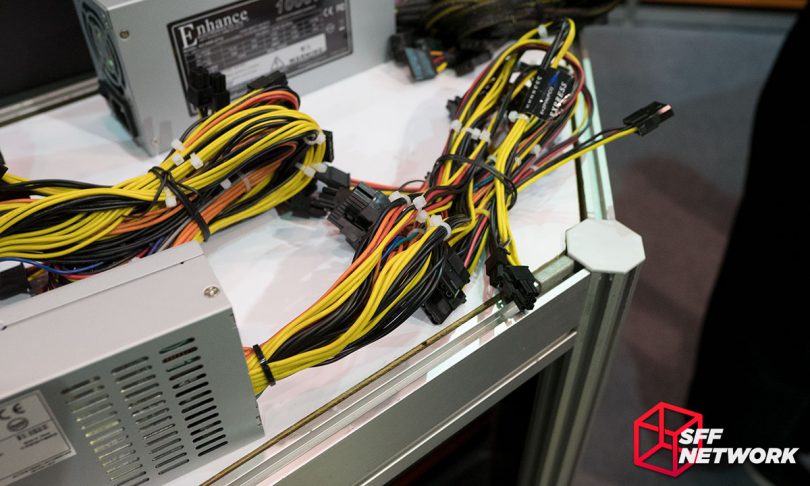 The wire harness on the display unit is surprisingly consumer-friendly, with 4-pin peripheral, SATA, and 6+2-pin PCIe present. But this is just an example harness and is not indicative of what the standard models will feature.

Availability should be around August. Enhance doesn’t focus at all on the end user market though so there probably won’t be retail availability.

We had the opportunity to go up to FSP’s meeting room and check out some of their upcoming FlexATX PSUs.

But real quick, I inquired as to what was with the stock situation with the 150mm long 500W Platinum-rated FSP500-50FSPT, since it was briefly available on Amazon but hasn’t been in stock for quite some time. Apparently FSP typically sells large batches direct to industrial customers, but their branch offices will have stock of certain models (I assume for replacement, samples, etc.) and that’s where the Amazon listings come from.

The FSP500-50FSPT has proven quite popular and that is the reason why they disappeared, but they should hopefully come back in stock soon. 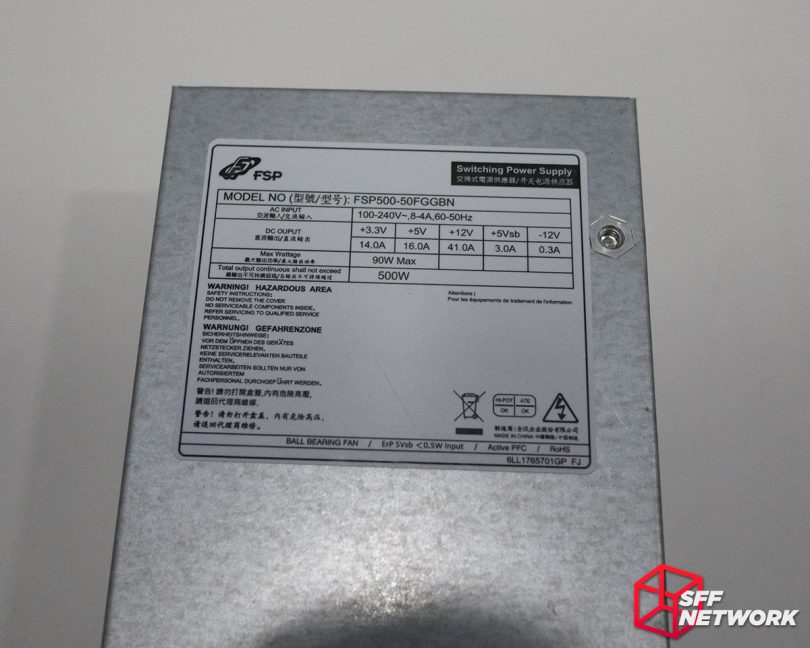 The 500W Gold-rated FSP500-50FGGBN is the most interesting of the bunch. That’s less efficient than the FSP500-50FSPT though, so why would I be so interested in it (besides the single rail on the 12V)? 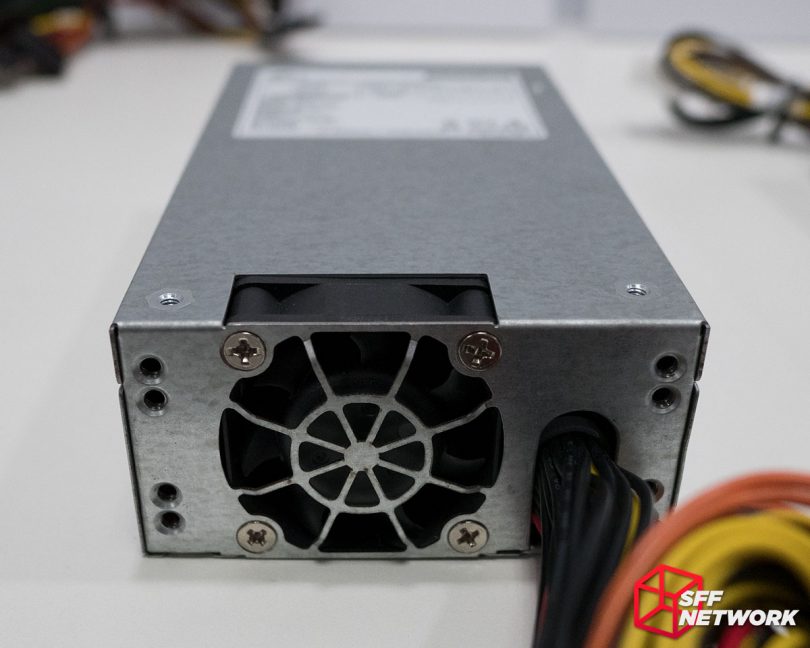 This is the reason. The 15mm thick fan is located at the front end of the PSU, so it will be buried within the case with a more typical layout. Not only that, but the fan intake grill is very generously ventilated for minimal airflow restriction.

Having the wire bundle nicely contained to a corner of the front should make cable management easier as well compared to the Platinum version. 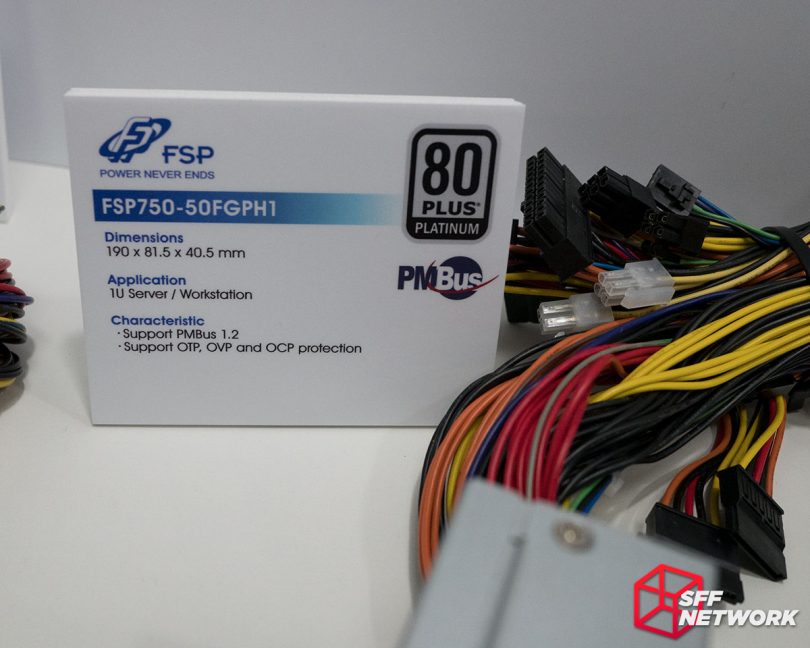 The FSP750-50FGPH1 is a 750W Platinum-rated FlexATX that comes in at 190mm. While a fair bit longer than the awesomely short 500W units, it’s still short enough that it could potentially be useful. Presumably the noise levels at typical SFF gaming loads would be reasonable, but that will have to be tested. 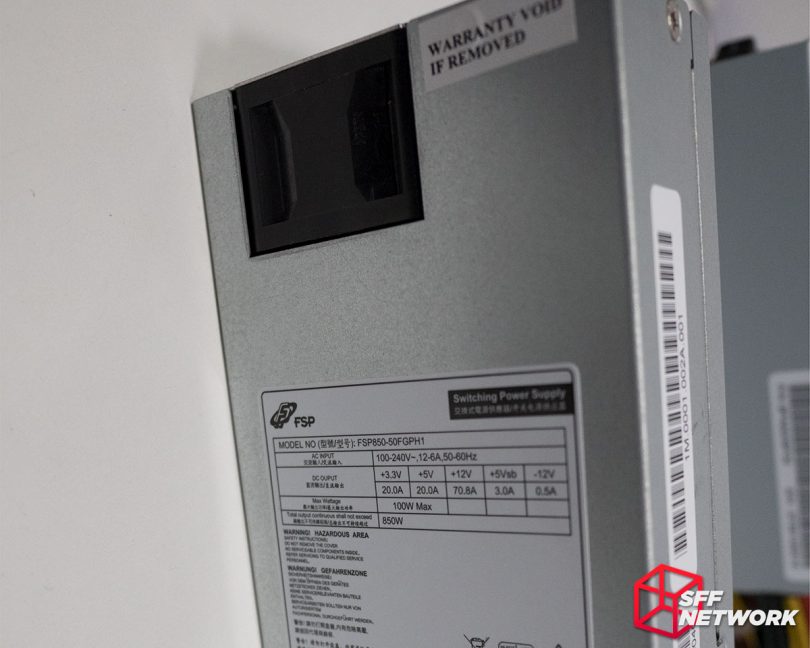 The new units should be available later this year, but there’s a good chance these models won’t be stocked by the branch offices so retail availability may be very sparse. 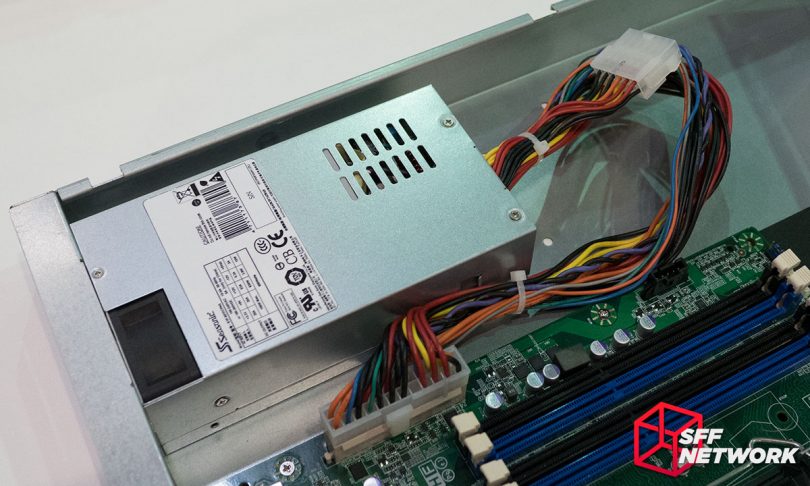 Seasonic has an upcoming FlexATX that is immediately interesting due to the semi-modular design. 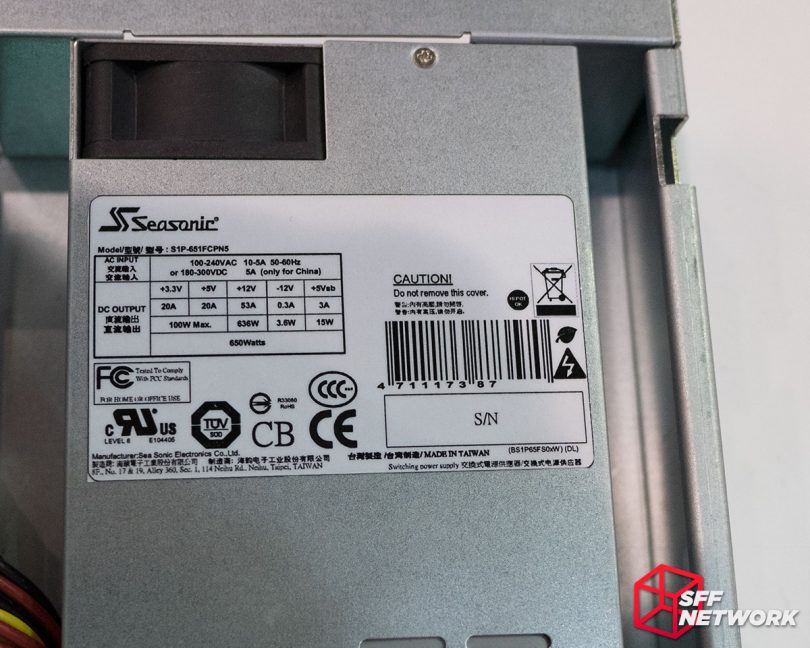 This Seasonic S1P-651FCPN5 is 650W and Platinum-rated, and features a single 12V rail that can do 636W as indicated on the label. 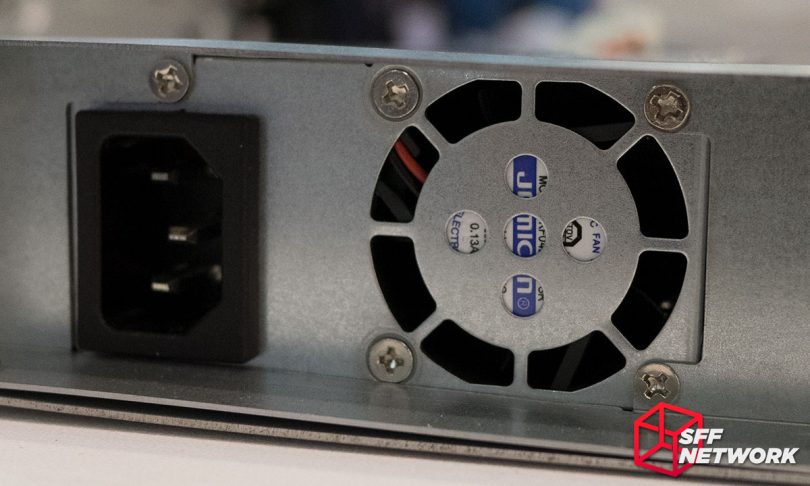 The fan is a double ball bearing 20mm thick model, but I don’t recognize the brand offhand. Please let me know in the forum thread if you recognize it so I can try to figure out the specs on it. I spoke with the product manager for this unit and according to him the fan does not spool up to full speed when the PSU powers on, but starts at a low speed and ramps up according to the fan curve.

Update: The fan on the display unit is indeed a Jamicon, but after inquiring it turns out the production design will likely use a 16,000 RPM Sanyo Denki.

Not only that, but the fan controller is temperature-based, so in a adequately cooled SFF case it could potentially stay relatively quiet. 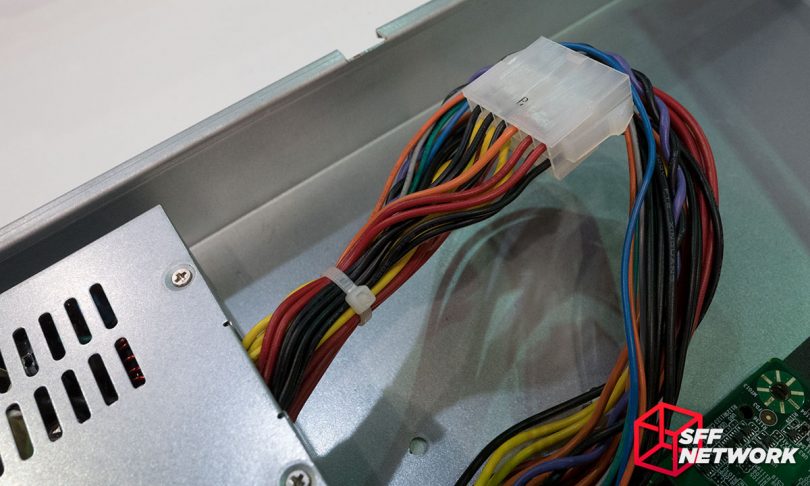 The 24-pin is hardwired, but all other connectors are split off this modular connector. In the display unit it’s wired with 3x 12V, 2x 5V, and 1x 3.3V, though it could probably be customized given a large enough order. 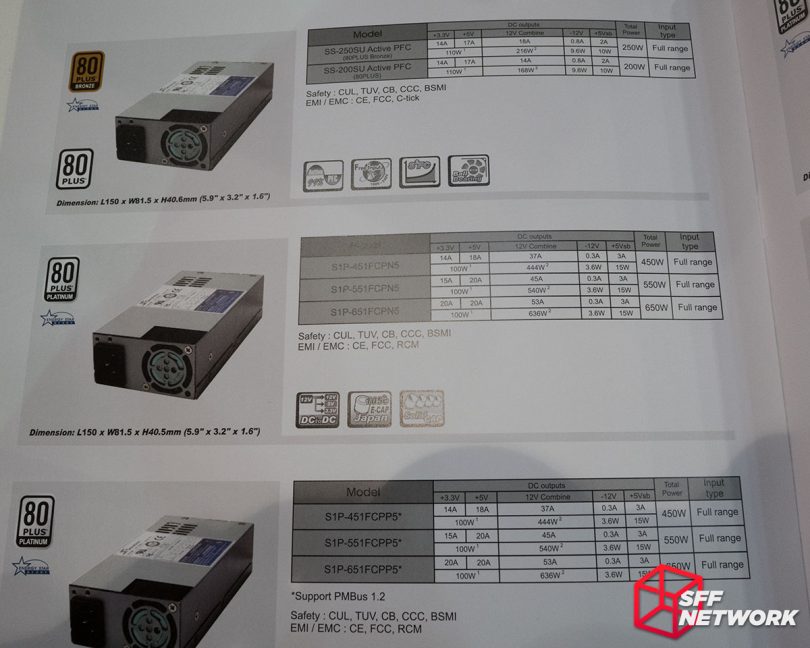 The catalog shows there is also a variant that includes PMBus support. It should release towards the end of the year. 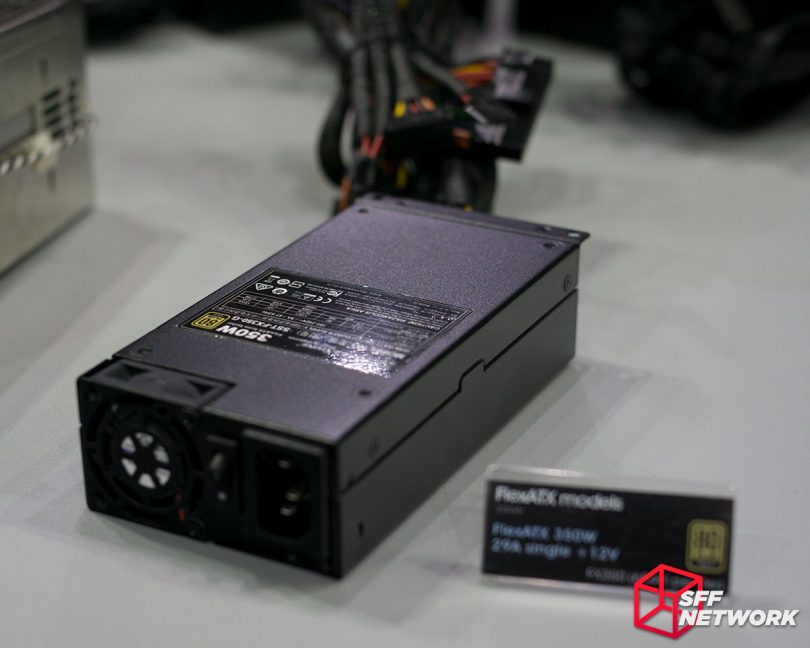 See our Computex 2017 SilverStone PSU post for more details here, but in short this is a 350W Gold-rated unit with a 40mm x 15mm fan and a single 12V rail.

The OEM is likely FSP due to the SFF power switch. Since SilverStone is selling it they’ve painted the unit black and retail availability won’t be an issue, so this is potentially quite exciting for SFF enthusiasts looking to move to FlexATX.

Production should start in September.

And last but certainly not least! Zippy is a name that probably isn’t familiar to consumers anymore, since they no longer build anything for the consumer segment and instead focus exclusively on the enterprise and industrial markets. They used to be very well regarded for their consumer ATX power supplies though, and they continue to build very high quality server PSUs. 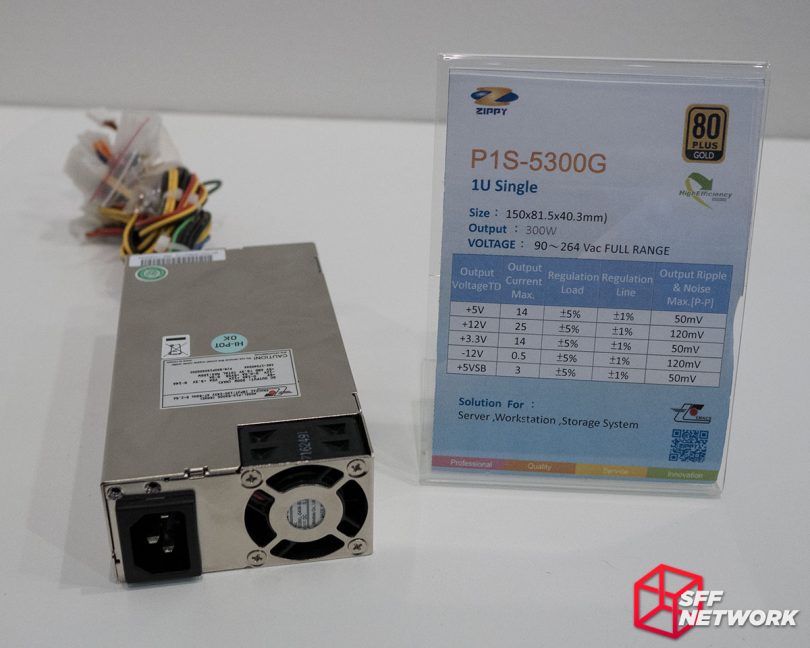 This is not a new product, but they had it on display. It’s Gold-rated, though only 300W, but thankfully the single rail 12V can do 25A. 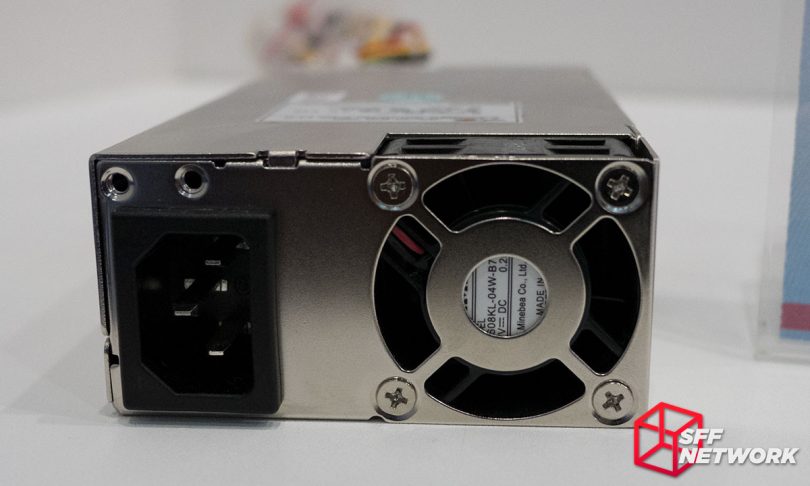 The fan is a NMB though it appears to be 28mm thick but the partial model number visible only matches to a 40mm x 20mm so it must be a custom one.

The reps at the Zippy booth were very helpful and if I understood correctly, this line has a temperature-based fan controller. They also said there’s a 500W version though I couldn’t find one on the website that was 150mm and wasn’t a single voltage output only. 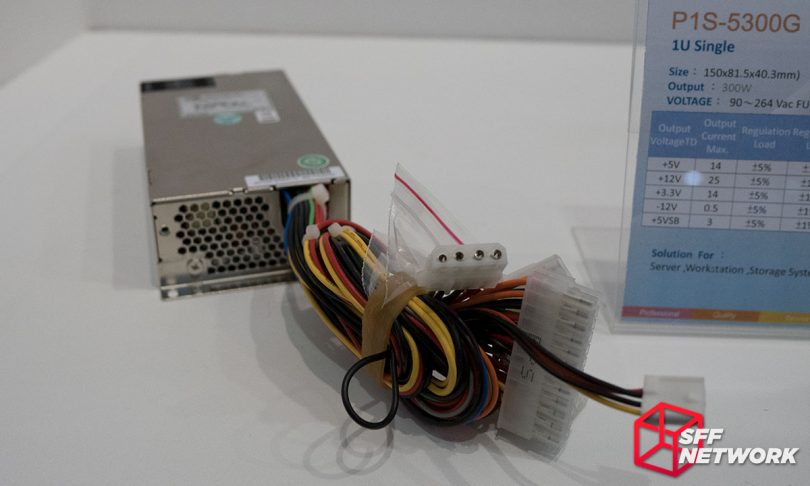 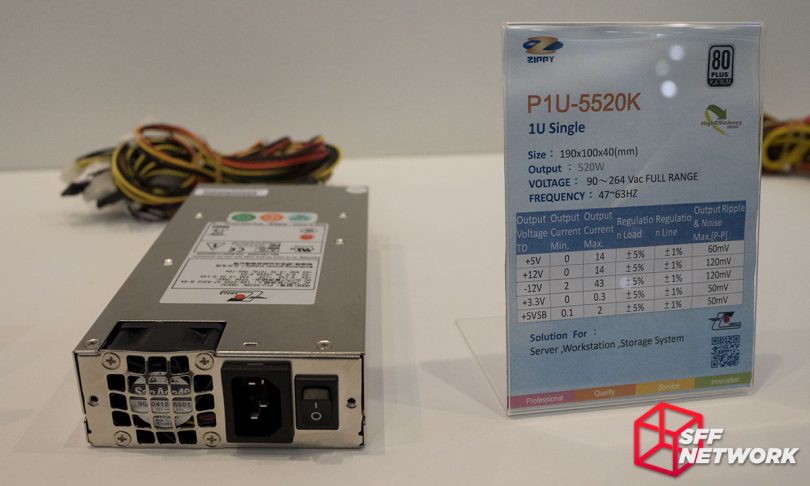 Not FlexATX, but I though the P1U-5520K was interesting since it’s fairly short for a 1U PSU at 190mm. It’s a 520W Platinum rated unit, and possibly with the extra space compared to the FlexATX it is less dense inside so the fan doesn’t have to spin up quite so much, but that’s just speculation. 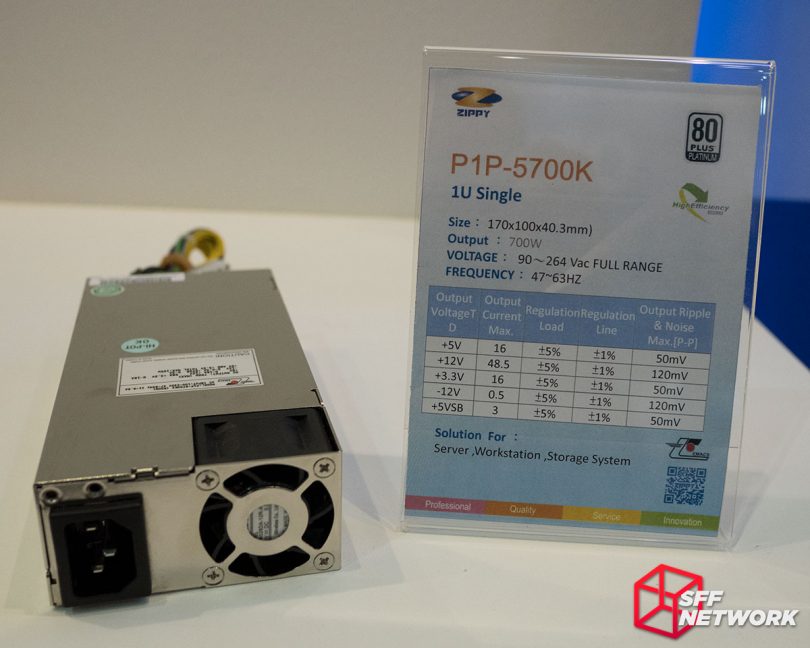 The Zippy P1P-5700K is a 700W Platinum-rated unit that is only 170mm long and while it’s longer than the other units featured so far, I think it’s still plenty reasonable for SFF builds since a Mini-ITX motherboard is 170mm wide anyway. 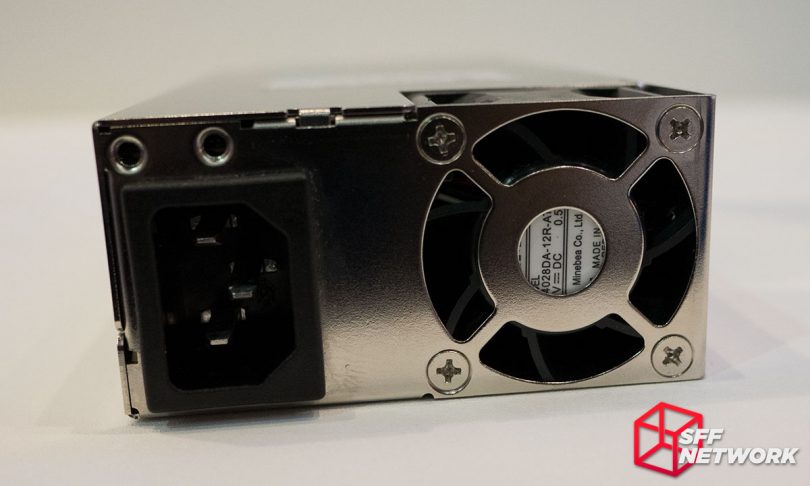 The fan here is also a NMB, this time a 40mm thick model. Once again the model number doesn’t quite line up so I’m not sure on the exact specs. According to the rep this uses a load-based fan controller.

And the eagle-eyed among you may have noticed that the finish on these units looks a bit different than typical server PSUs, and that’s because they’re nickel plated for extra corrosion resistance. Which is a bit overkill but it’s a nice touch. 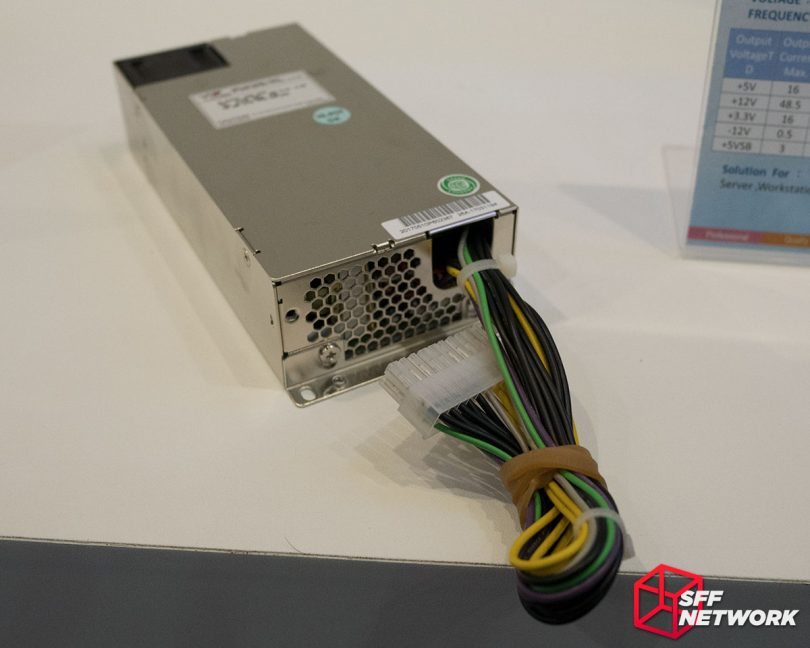 The display unit doesn’t have normal ATX wiring, but the reps said they can easily do custom harnesses (including all black wires) without a high MOQ.

This unit should release later this year.

This is by no means an exhaust listing because there were many booths here for companies I’ve never heard of with industrial PSUs. But hopefully this Computex 2017 FlexATX roundup is helpful for anyone considering FlexATX for their next SFF build or case design and wants to know what new models are on the horizon.

If you enjoyed this you may also check out our SFX-L and SFX roundups.