Taiwan is home to Lian Li, the well-known makers of all-aluminum cases, and as expected Lian Li had many of their products on display at Computex this year.

Lian Li’s booth had quite a few full-tower aluminum behemoths, but I was immediately drawn to this new Mini-ITX case they had in the back corner. 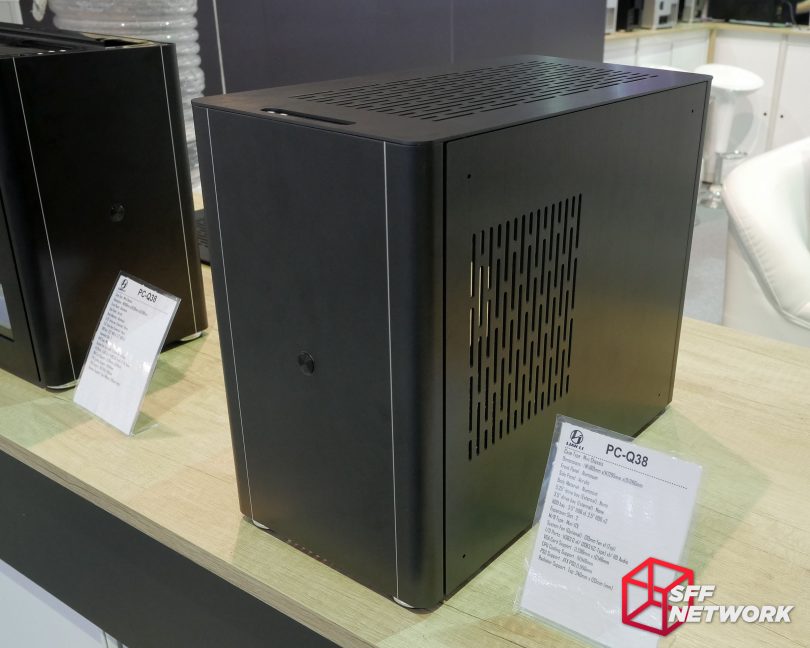 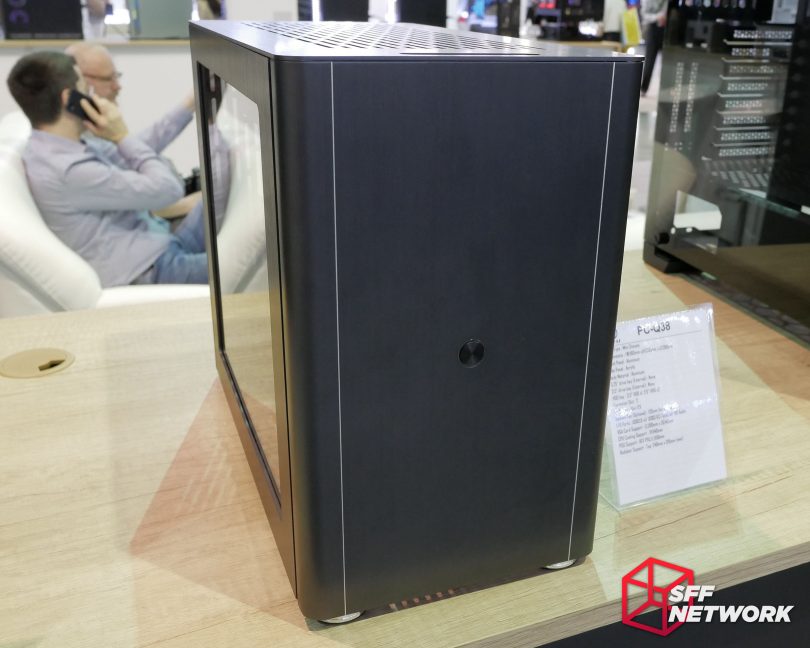 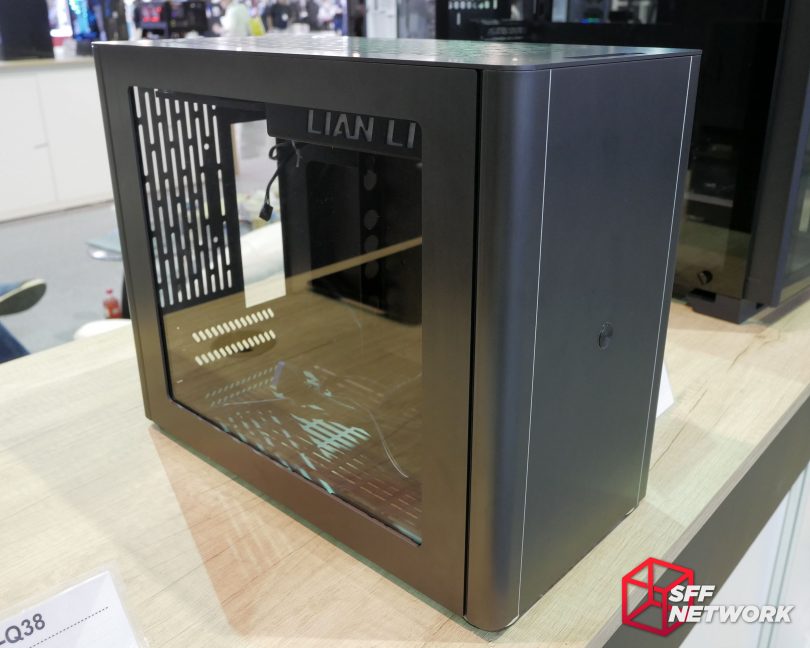 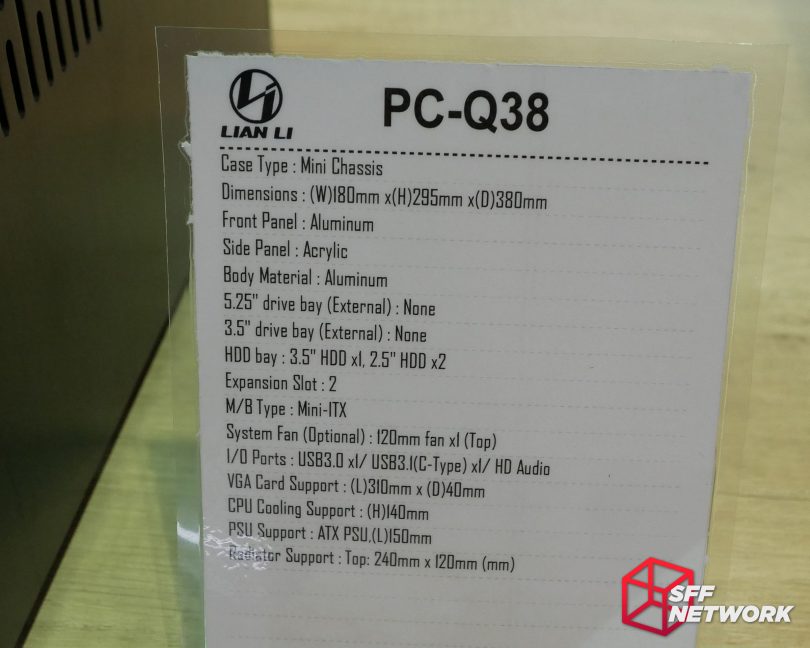 This is the PC-Q38 Mini-ITX case. At 20.2L it’s not tiny for ITX, but it does fit a 240mm radiator in such as way as to keep the side panel window clear to show off the build. 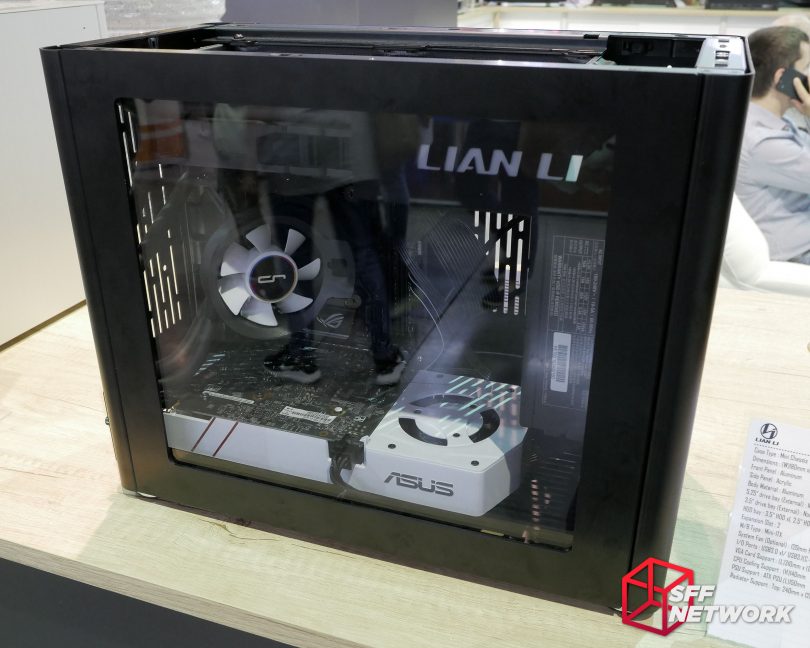 Here we can see where the PSU is located, up against the front of the frame. 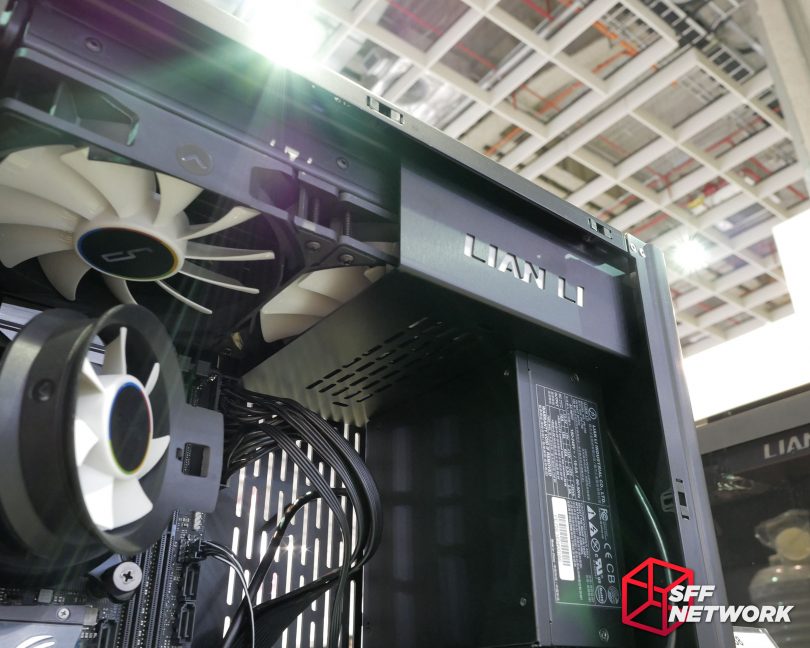 This demo build is powered by the Lian Li PE-750. 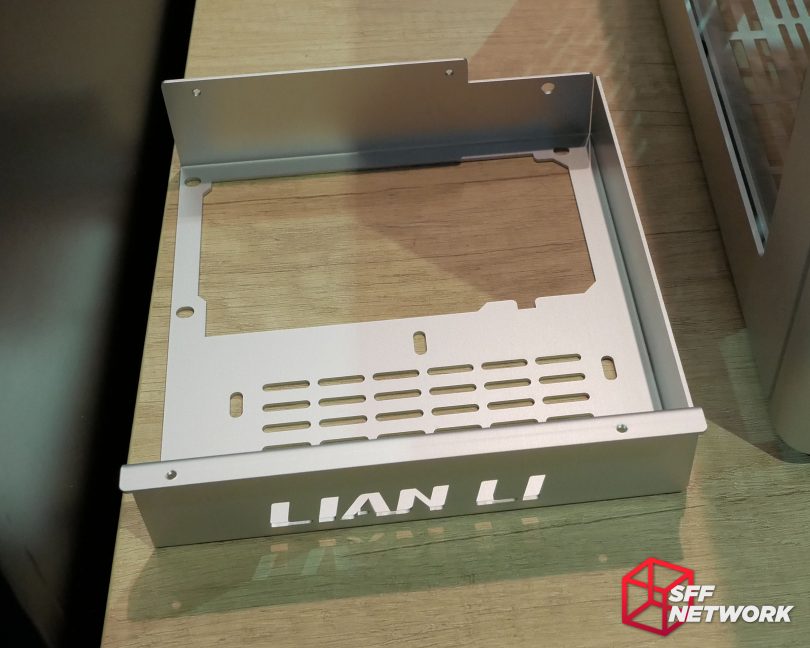 An ATX PSU bracket will also be included, though don’t worry, it’ll be in matching colors to the case. 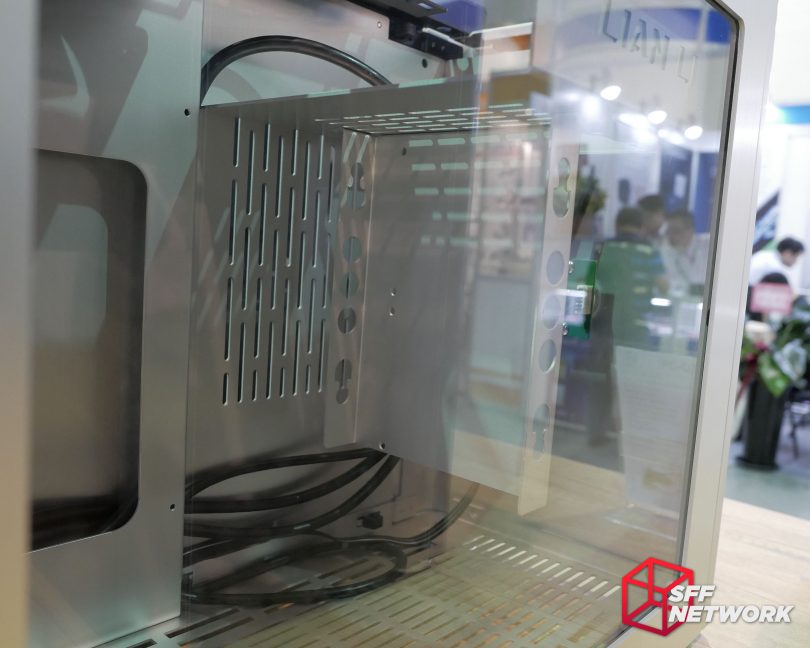 A removable drive bracket can be attached to the PSU bracket to make some use of the space between the power supply and the motherboard. It can mount a single 3.5″ using Lian Li’s rubber grommets and what looks like two 2.5″ drives with screws. 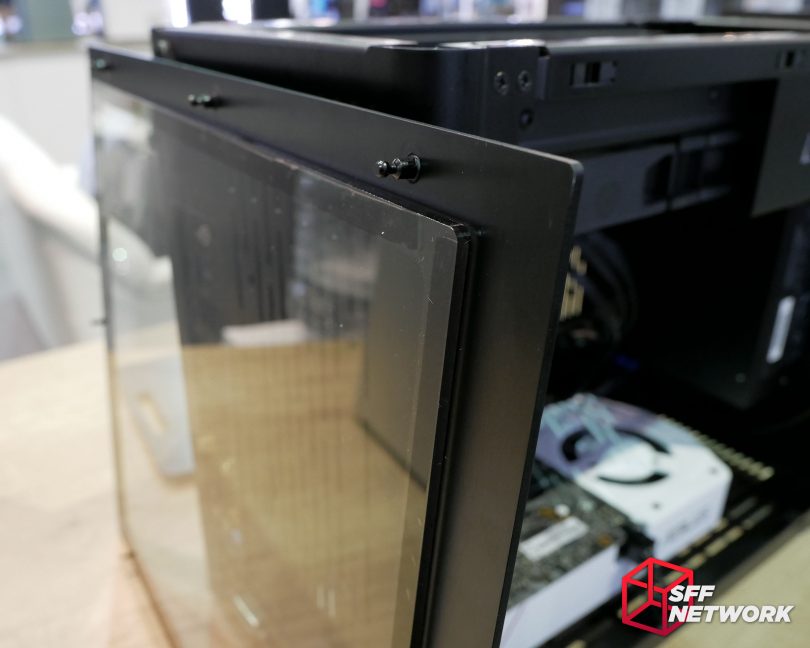 The side panel window is acrylic and is attached to the panel with adhesive. It’s a bit hard to tell from this picture, but the top andside panels are an impressive 2mm thick for a hefty premium feeling compared to the 1.5mm panels Lian Li typically uses for their smaller cases. 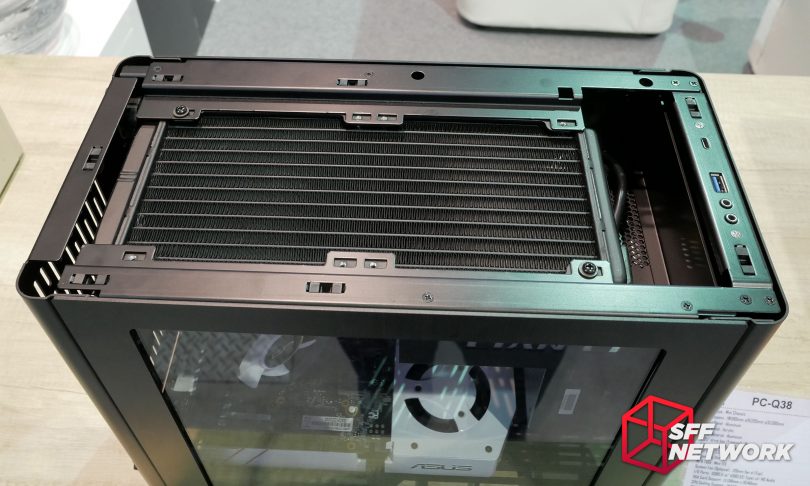 With the top panel removed we can see mounts for either 2x 120mm fans or a 240mm radiator. 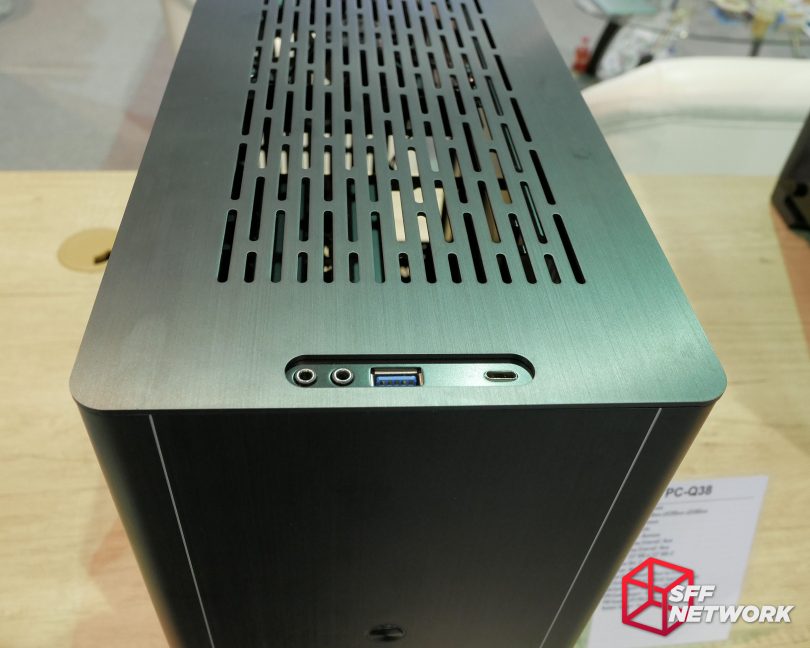 Front IO consists of audio, USB 3.0 Type-A, and what the spec sheet says is a USB 3.1 Type-C. I forgot to verify at the time, but looking through my picture it appears that the Type-C terminates in the USB 3.0 header as well however. Perhaps it’s a pre-production thing though and it will be properly USB 3.1 for release. 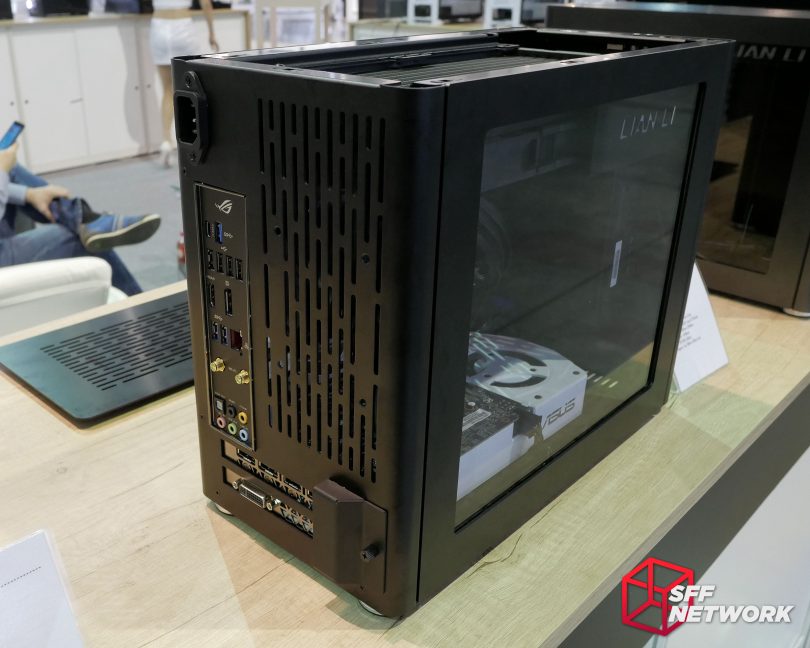 Weirdly there is a 2.5″ drive mount within the rear vents, but no fan mounts. 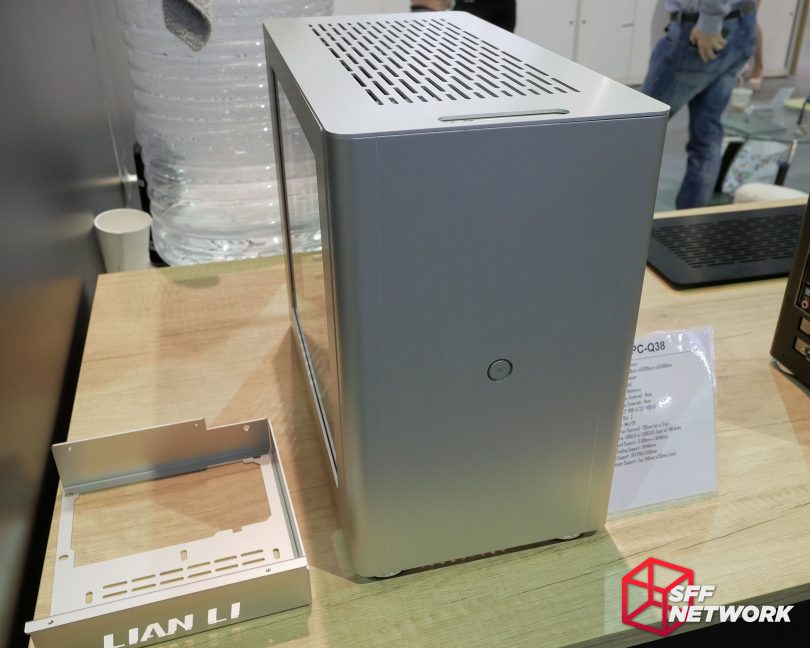 Lian Li also had a variant with a silvery anodized finish that looked quite nice. 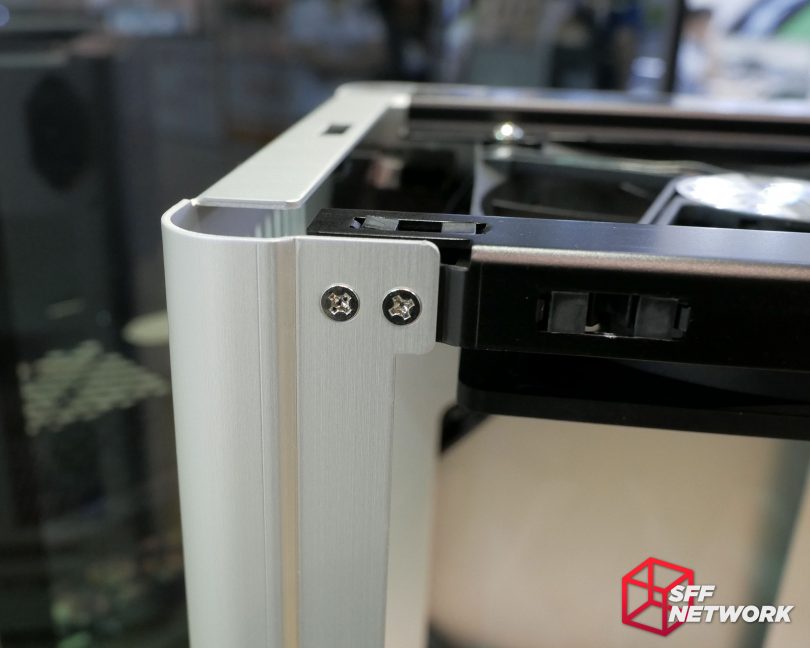 A nice touch on the PC-Q38 is that the entire frame is held together with screws instead of rivets, allowing for complete disassembly of the case.

I meant to come back and get more details on the following cases, but unfortunately I forgot so this is all I have. 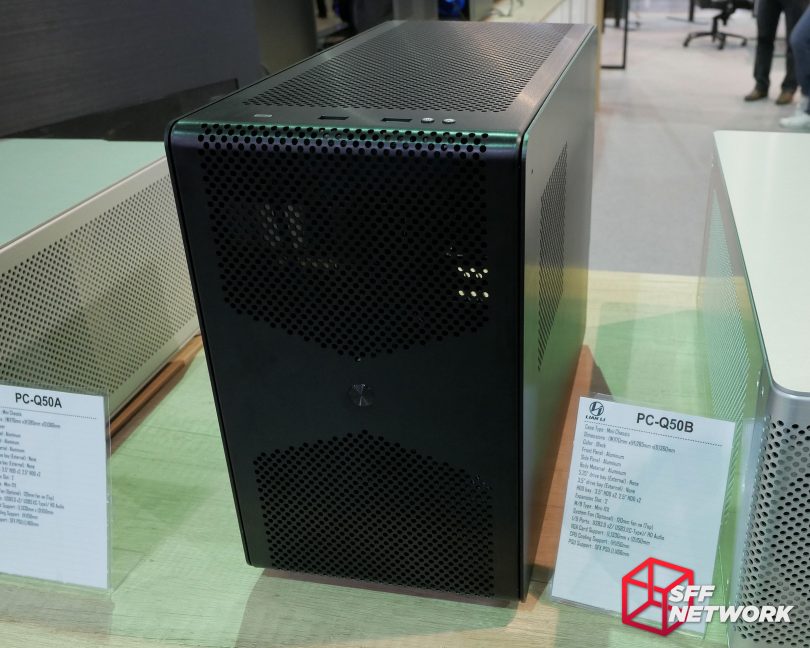 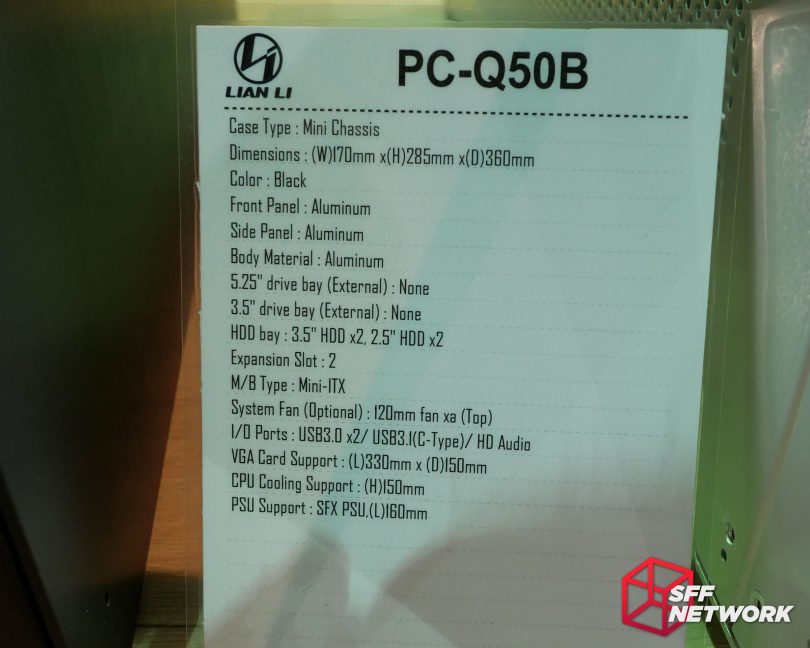 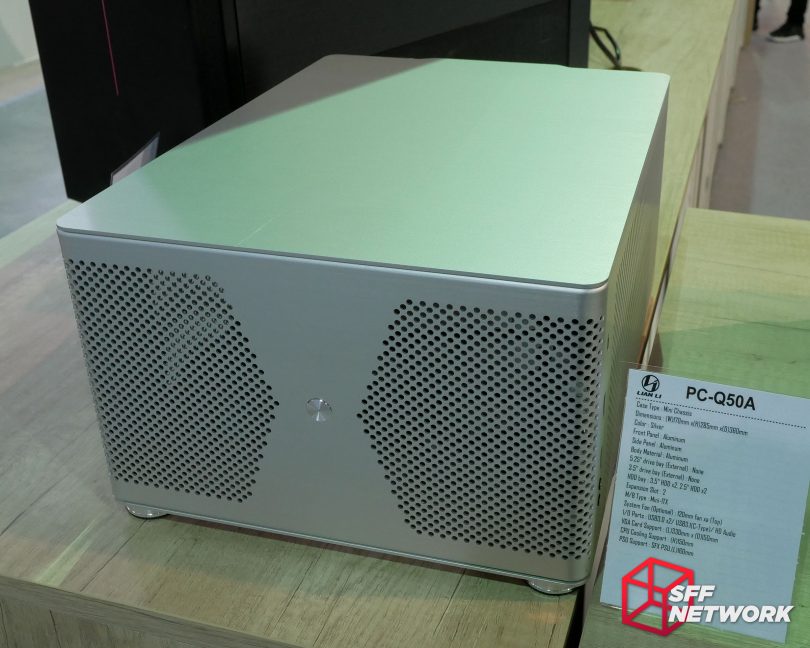 Also available in silver, and I guess the feet can be moved on both to lay them over on their side. 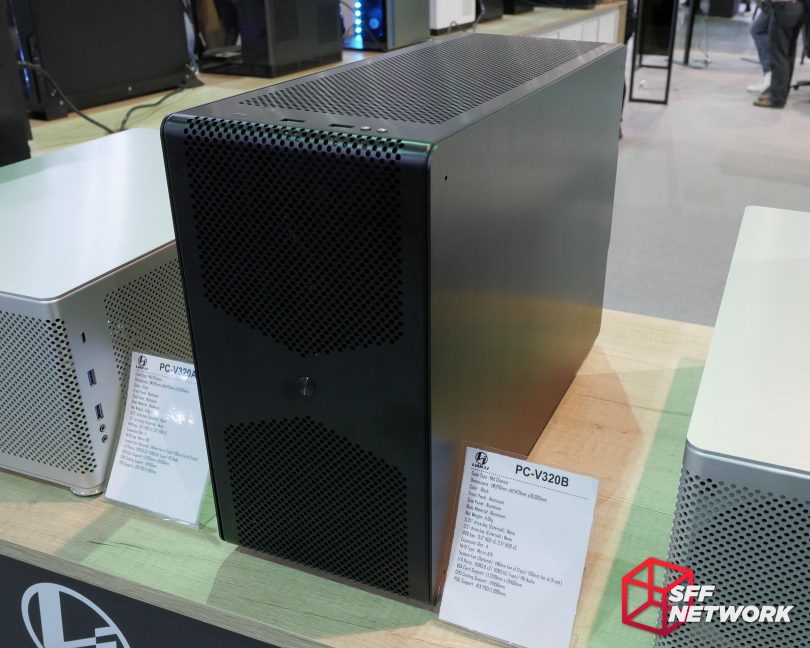 The same exterior design as the PC-Q50 but in microATX. 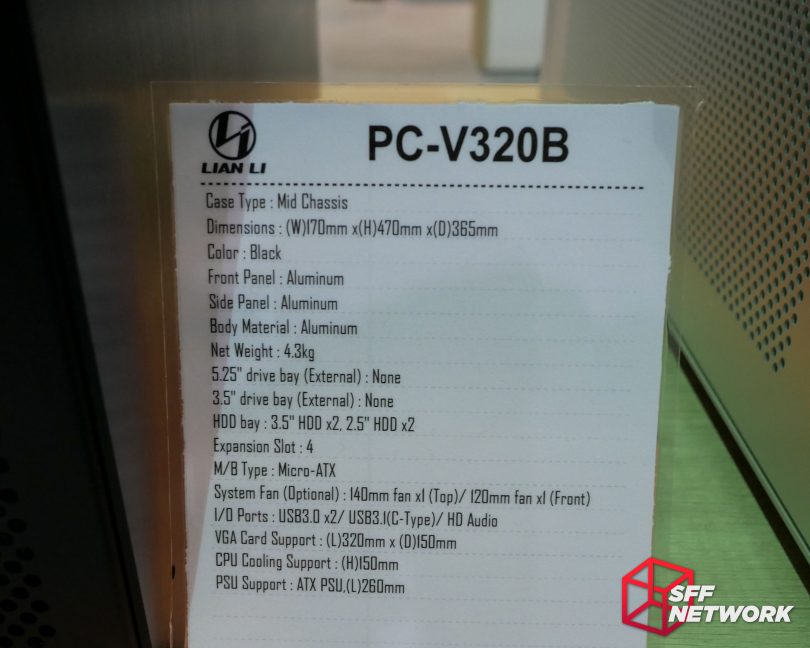 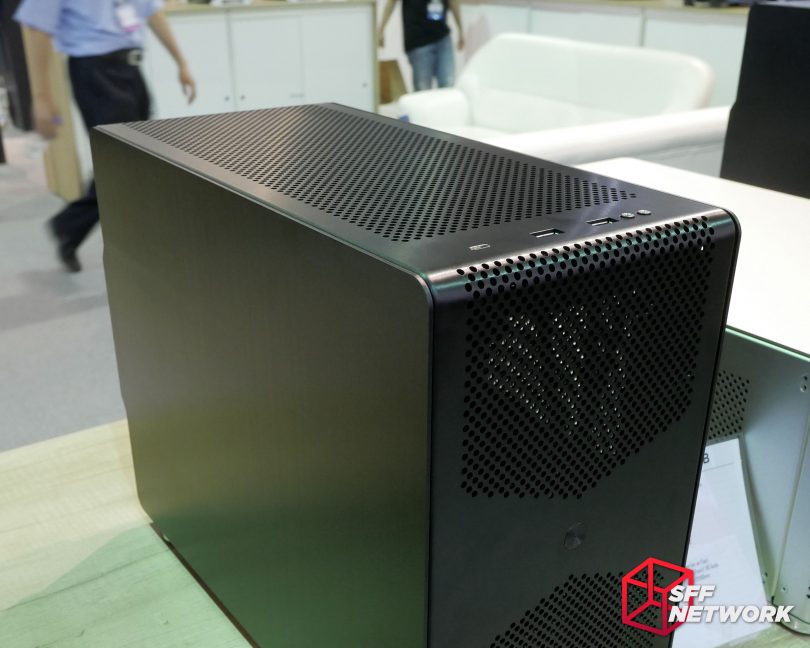 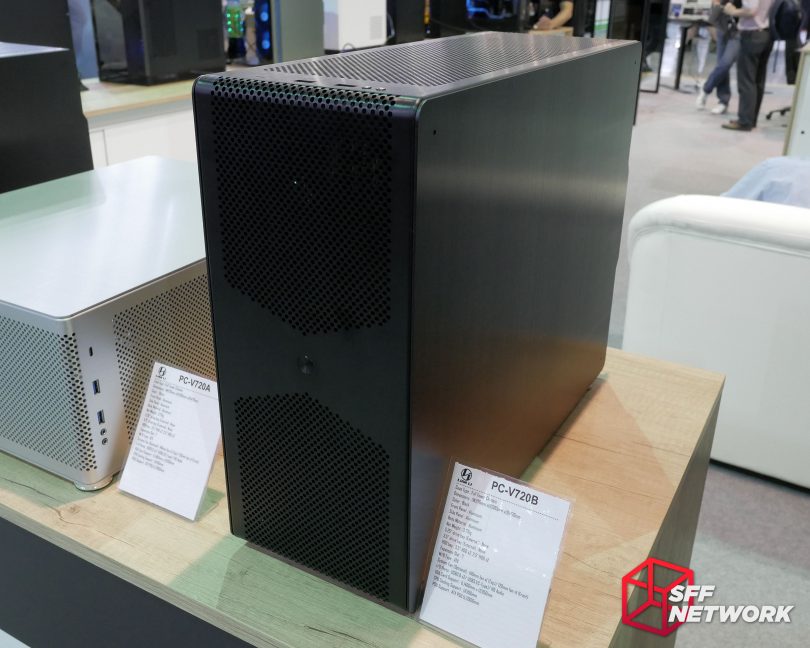 And again, this time in ATX. 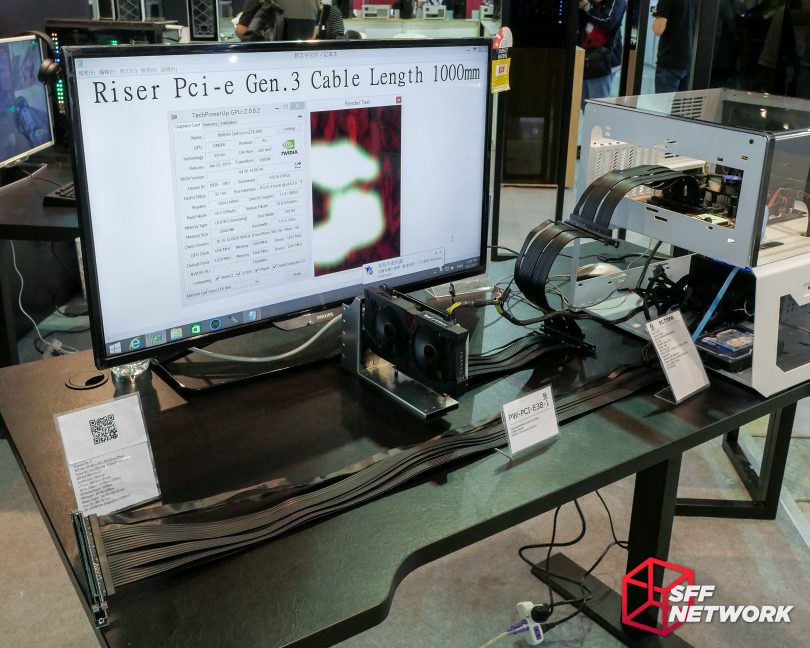 Also at their booth Lian Li had these new PCIe 3.0 x16 flexible extenders. The performance on these must be impressive because they were even showing off with a 1000mm (one meter!) cable as well as 3 shorter ones daisy-chained together.

Of course, just showing that the video card maintains PCIe 3.0 x16 during the GPU-Z load test isn’t a comprehensive test since, as we learned from SilverStone, PCIe extenders can be very difficult to completely verify reliability. 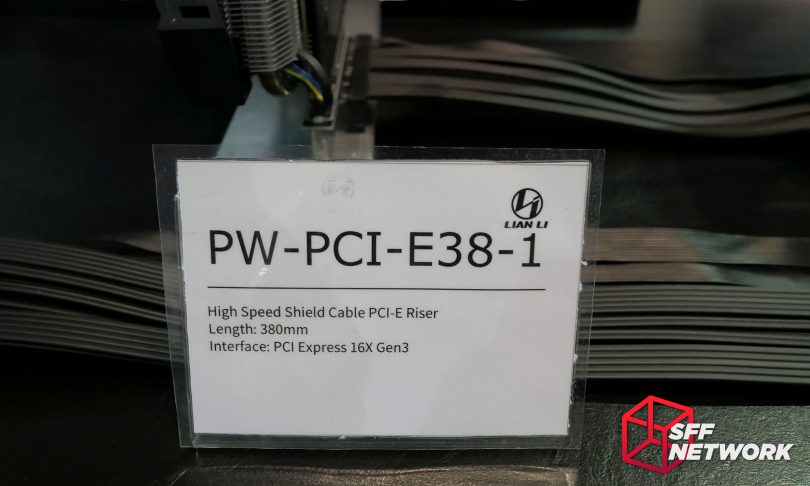 The 1000mm looks to be just for demonstration purposes though. The normal model appears to be the 380mm long PW-PCI-E38-1, however and it is available for pre-order at Performance PCs for $65. There was also a 300mm version (the PW-PCI-E30-1) elsewhere in the booth but I’m not sure what it’s for or if it’ll be released since it’s so similar in length. 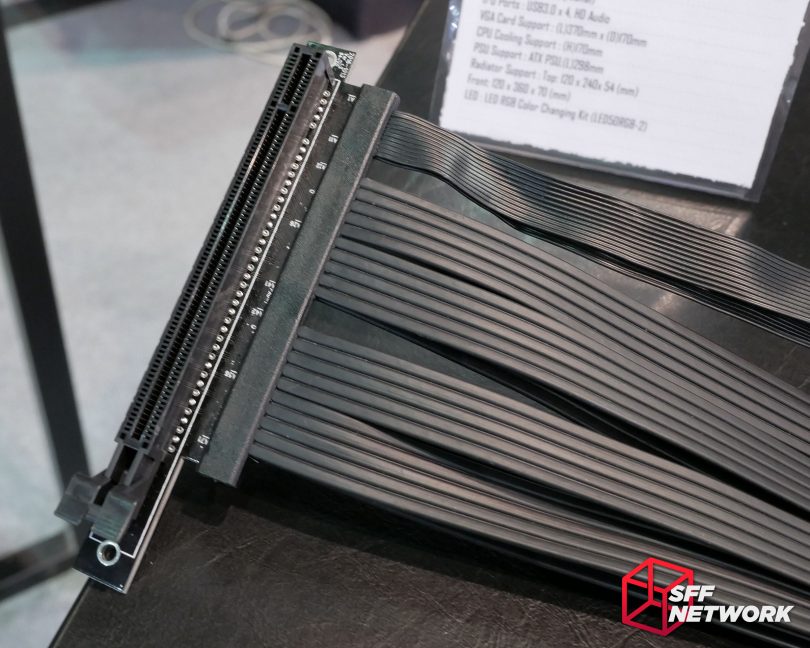 The wires are reinforced where they attach to the PCB with a piece of plastic.

Also, the ribbon of wires at the front edge of the slot is mostly for power and supposedly these cables are capable of safely delivering the full 75W of power that a PCIe x16 slot is rated for. That spec includes 3A on the 3.3V rail though, which is less commonly used on today’s graphics cards, while the 12V is rated for up to 5.5A (66W). 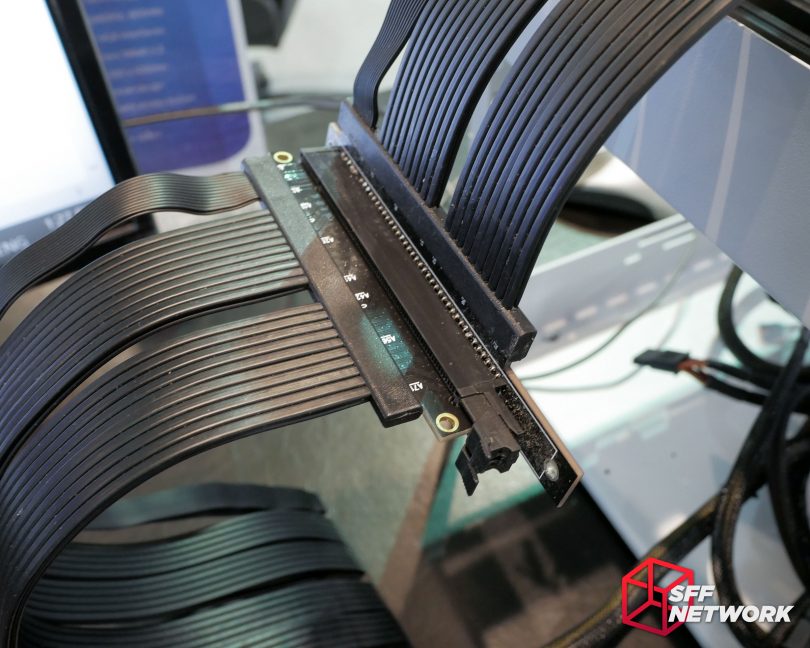 Here are the extenders that are daisy-chained together. This is pretty impressive if this actually a completely stable configuration, because maintaining a reliable link is very difficult due to impedance mismatches as the signal transitions from connector to PCB to wire to PCB to connector multiple times. 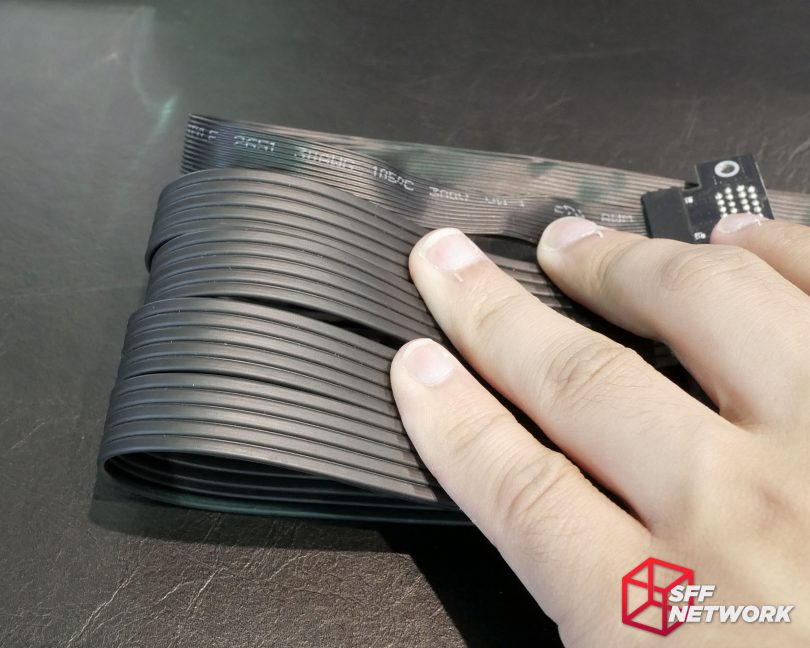 I didn’t try press them too hard to avoid potentially damaging them, but Lian Li’s cables seem very flexible. 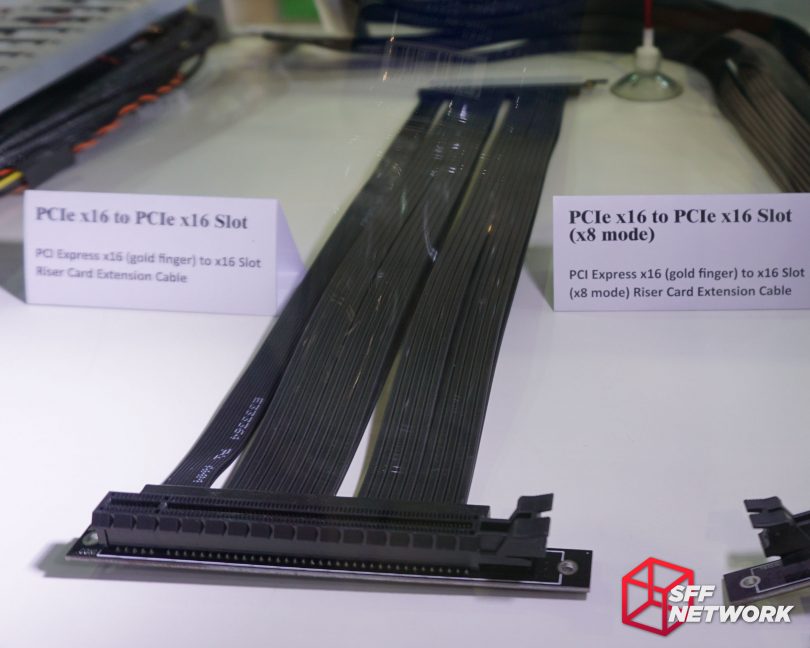 Sharp-eyed readers may have noticed that Lian Li’s new cables look extremely similar to the ones we saw in the Raijintek booth. As luck would have it, some members of our team stumbled across a third set of such cables at the booth of who appears to be the OEM (or at least involved in its development) for them, IOI Technology Corporation. The IOI reps weren’t even willing to take their cables out of the display case, so we did not learn much additional detail from them though. 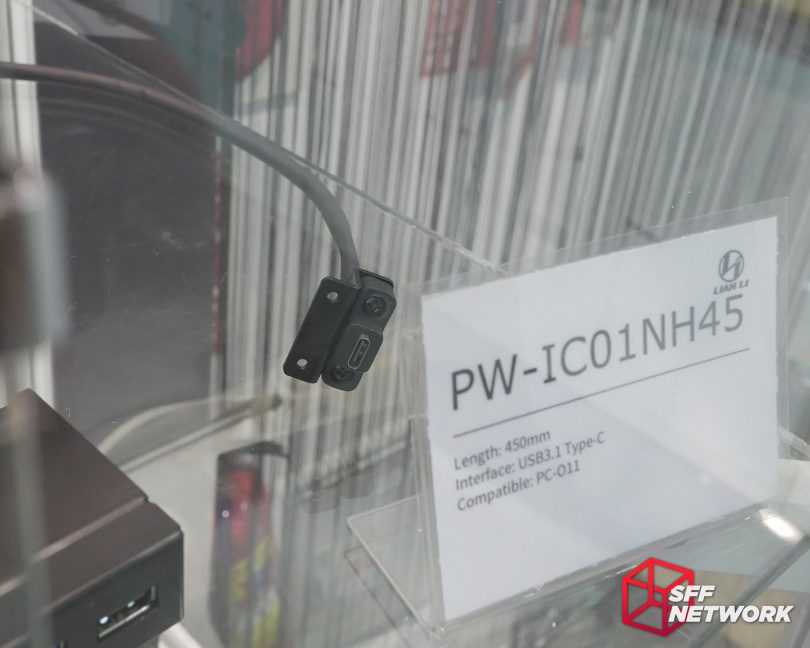 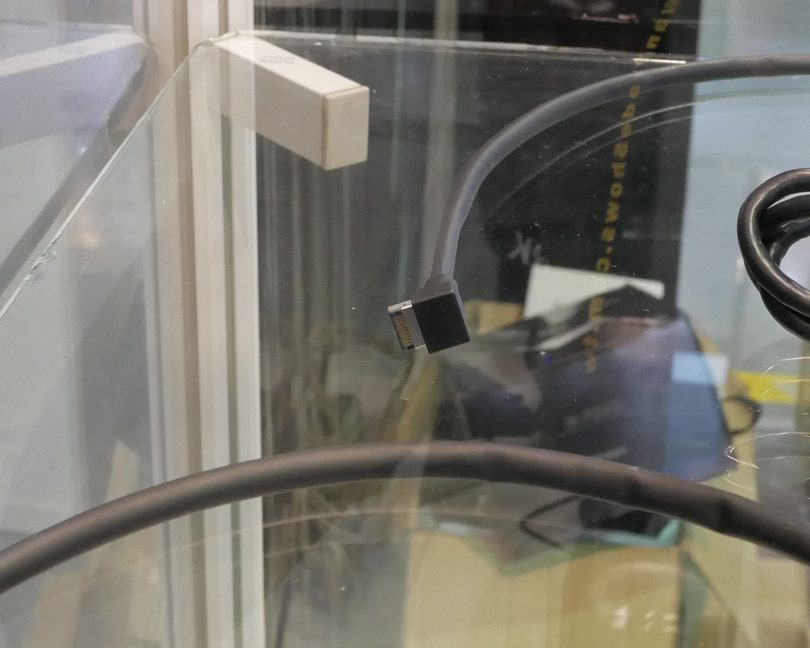 This is the PW-IC01NH45 USB 3.1 Type-C front panel connector kit, which is uses the new motherboard header we reported on earlier this year.

From looking at listings at some European retailers, it appears as though this cable will release next month for €20.