TechPowerUp forum user TheLostSwede snapped a few pictures of some very interesting motherboards from Colorful‘s booth at Computex. They are custom Intel B150 motherboards with a LGA 1151 socket and most importantly, an integrated NVIDIA GPU in the form of either a GTX 980 or GTX 1070! Basically it’s a combination of an ITX-esque motherboard and a MXM card. 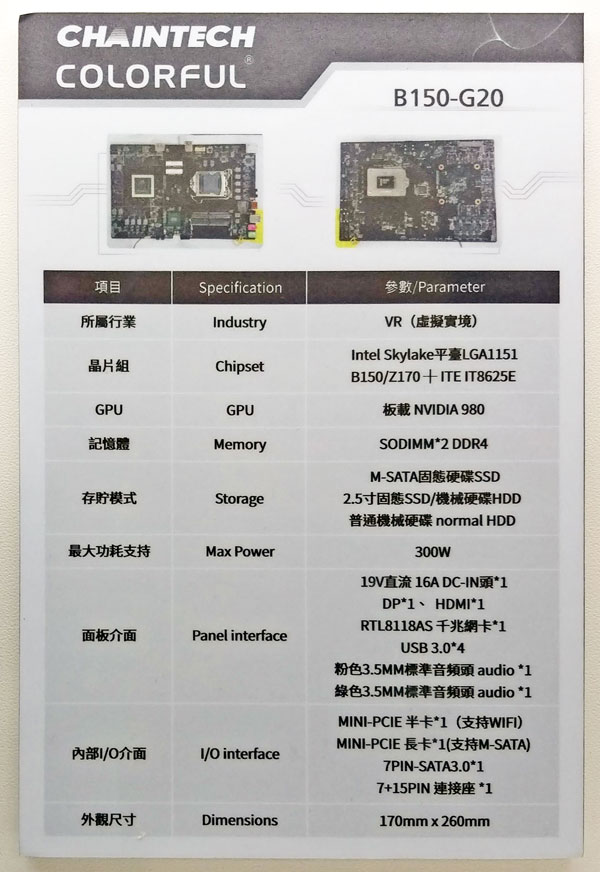 Here is the sign for the Colorful/Chaintech B150-G20. Despite the model number, it seems this board is available in a Z170 variant. Most importantly though is that this board has an integrated NVIDIA GTX 980! Talk about packing some beefy onboard video. The reason for the hefty hardware though is because this board is aimed at the VR industry, where the GTX 970 is the recommended minimum (for the Oculus Rift at least). 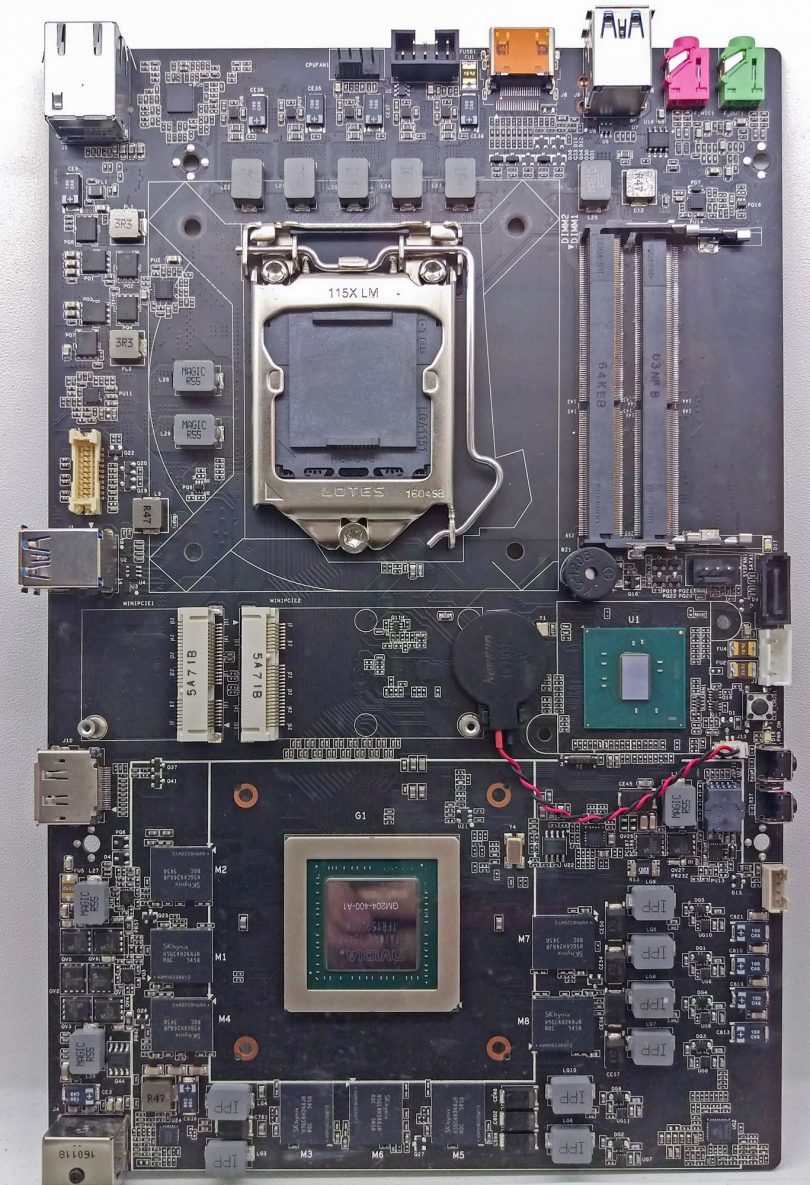 The board has standoff holes that correspond to the Mini-ITX standard, and the width is 170mm like Mini-ITX as well. Height of course is much longer, at 260mm, to make room for the GPU and associated components. Aside from the GPU, my favorite part of this board is the socketed processor, if these boards ever become available to purchase by consumers, it would make for some sweet custom SFF builds without being locked into a certain CPU like the Intel NUCs. 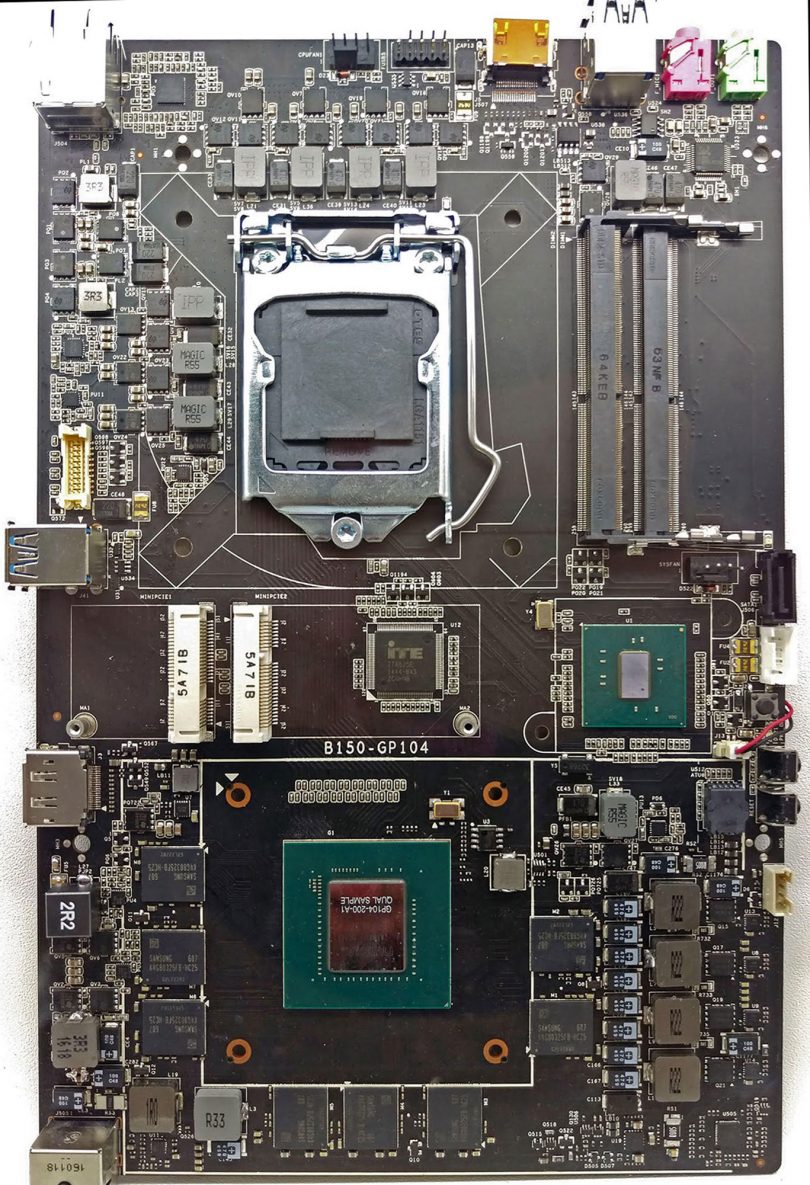 The layout and specs are almost identical, with the major difference of course being the inclusion of a GTX 1070 instead of a 980. This would make for quite the compact VR powerhouse. I’m curious though if there is a GTX 1080 version in the works or if Colorful found with the B150-G20 that the extra heat and power consumption of the x80 class GPU was a bit too much for the form factor.

My guess is these boards are intended to give smaller system builders the ability to build compact VR boxes or VR backpacks like a few companies showed off at Computex. I lean toward VR backpacks as the intended use case because the IO layout seems very odd for a desktop unit. The power button is in the bottom left corner facing down, while the bulk of the IO is at the top facing up, but there are two USB 3.0 ports on the left side along with either a HDMI or DP port, then on the right side are the power and reset buttons (locations and direction relative to the vertical pictures in the article). That would result in ports and buttons on every side of the case which would be strange, but with the board installed in a backpack in the orientation as pictured it makes sense, because the IO at the top would be closer to the headset.

The other advantage of this layout for a VR backpack is that it places both heat generating components in the same plane and on the same side of the board, simplifying the cooling solution. The big question would be the power supply. According to the spec sheet, it takes a 19V DC source in and up to 300W, but a VR backpack would presumably be running off a battery. There have been experiments in our forum to run a portable VR system off a battery so it seems like a surmountable problem to even a relatively small system integrator.

And big thanks to TheLostSwede on the TPU forum for letting me use his pictures in the article!

SFF.N depends on community members like you to stay online! Consider a one-time donation to support the site, or take a look at our monthly supporter subscriptions for exclusive perks and benefits!
Total: 286 (members: 50, guests: 236)