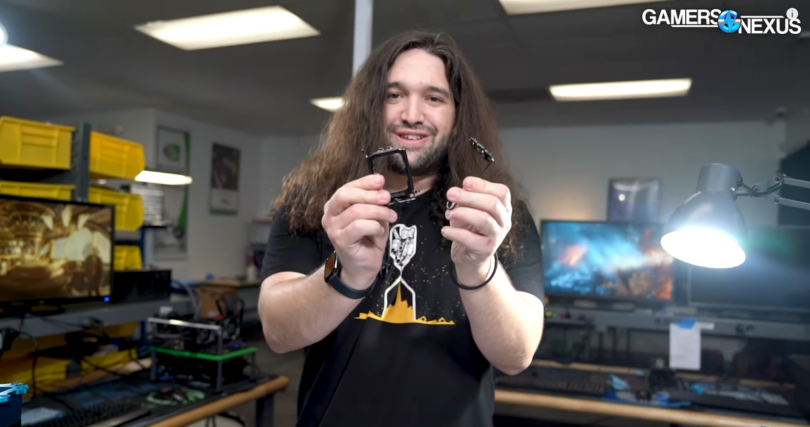 Steve from Gamers Nexus, seen above flaunting Intel's failure to its face, has done in-depth pressure testing of the LGA-1700 platform and found it wanting. Specifically, the GN team found that asymmetric mounting clip for the CPU socket puts unequal pressure on the CPU IHS. This causes non-linear contact over the CPU die which in-turn causes higher temperatures for the cores. How much higher? Using Thermal Grizzly's Contact Frame instead of the stock mounting mechanism saw a drop of approximately 7C in package temps. That is a massive difference of the caliber that people used to use delidding and liquid metal to get, and points to a major problem in Intel's design. 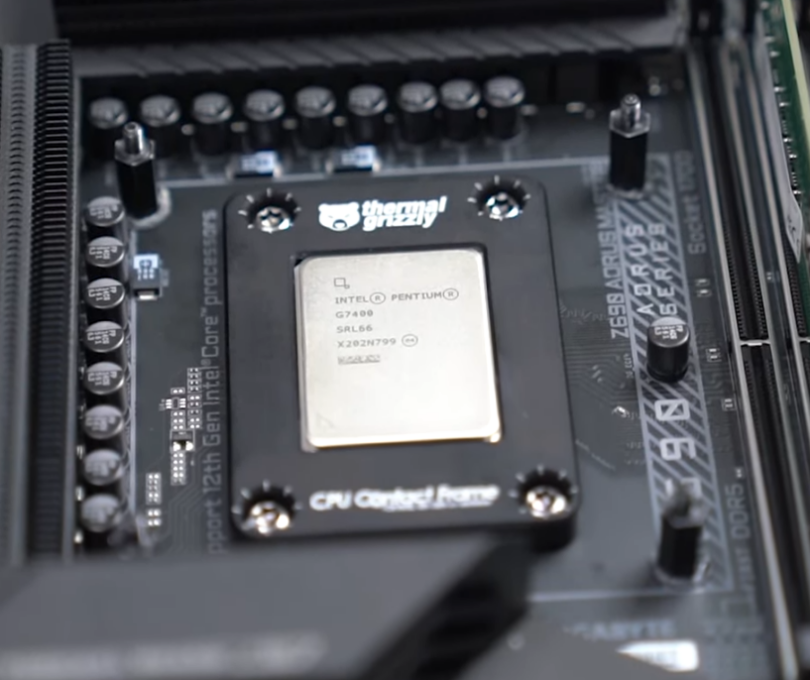 The catch, and there always is one, is surprisingly not the price of the TG Contact Frame, which comes in at approximately $35. The catch is that properly aligning and positioning the Thermal Grizzly Contact Frame is not for the inexperienced. Improper pressure can result in the pins not making proper contact with the pads on the CPU. This can result in problems ranging from the system not booting to memory channels not working. Alternatively, over tightening can damage the socket of the board.

This is going to be a big boost to the SFF world which is already struggling to tame Intel's 12th gen CPUs. The 12900K can cook a 360mm AIO in stock form. Every single degree reduction helps, and can lead to longer and higher turbo duration and clocks respectively.

Click on the video below to watch Gamers Nexus excellent investigation.

i’m surprised we haven’t seen any of the mobo manufacturers offer up different solutions to separate their boards from the rest. I wonder if Intel doesn’t allow them to use their own mounting solutions?

Pagusas said:
i’m surprised we haven’t seen any of the mobo manufacturers offer up different solutions to separate their boards from the rest. I wonder if Intel doesn’t allow them to use their own mounting solutions?
Click to expand...

I think you hit the nail on the head with that. Intel is not friendly to people who mess with their basic specs, and one bad CPU install will probably spread like wildfire with a title of “my 12900K doesn’t work!”.
Reactions: rfarmer