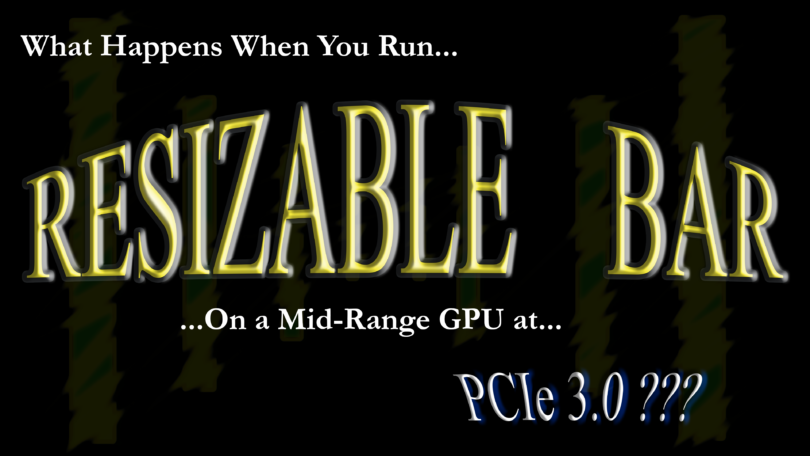 Today we’re going to look at the effects of Resizable BAR, but with a twist. For those that don’t know, Resizable BAR is a feature that has recently been activated on Nvidia 3000 series and AMD 6000 series GPUs. It allows your CPU to access more than just 256MB of memory at a time. As we now have GPUs in the consumer space with 24GB of memory, this can be a good benefit.

Just a heads up but you may hear AMD call this Smart Access Memory. It is Resizable BAR though.

What’s the final catch? Well, not all games support it. Some may even be hindered by it.

There have been a lot of tests that typically show a three to five percent improvement by turning on Resizable BAR. However, virtually all of those tests were run on a PCIe 4.0 systems with top-of-the-line GPUs. Today, we’re going to test what happens when you turn on Resizable BAR on a mid-range GPU, with a PCIe 3.0 interface.

Why PCIe 3.0? A lot of SFF cases are shipping with PCIe 3.0 riser cables. Additionally, some B550 boards are having issues running at PCIe 4.0 even with PCIe 4.0 riser cables. Under these conditions, does Resizable BAR even matter? Time to find out.

Our test setup is the same system we built for our MSI RTX 3060Ti Aero ITX review. As a reminder, none of the components in this build were provided by any manufactures, or are review samples. They were all purchased on the open retail market. 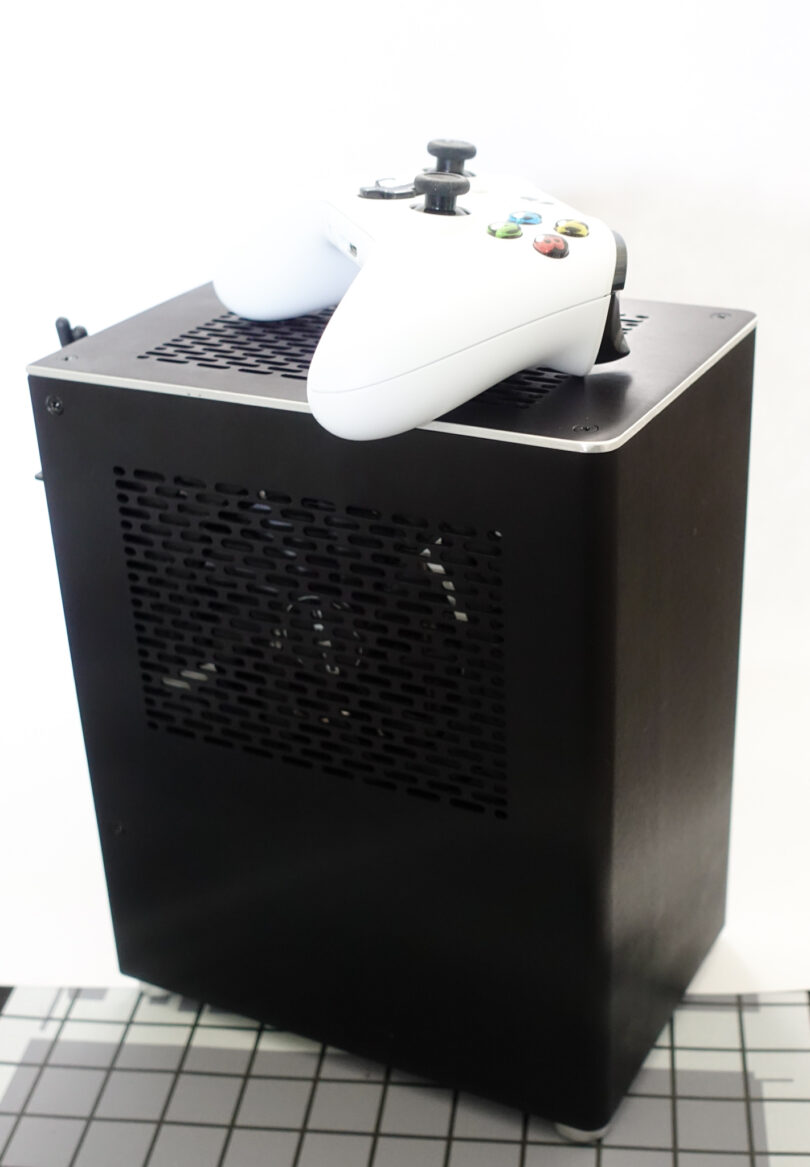 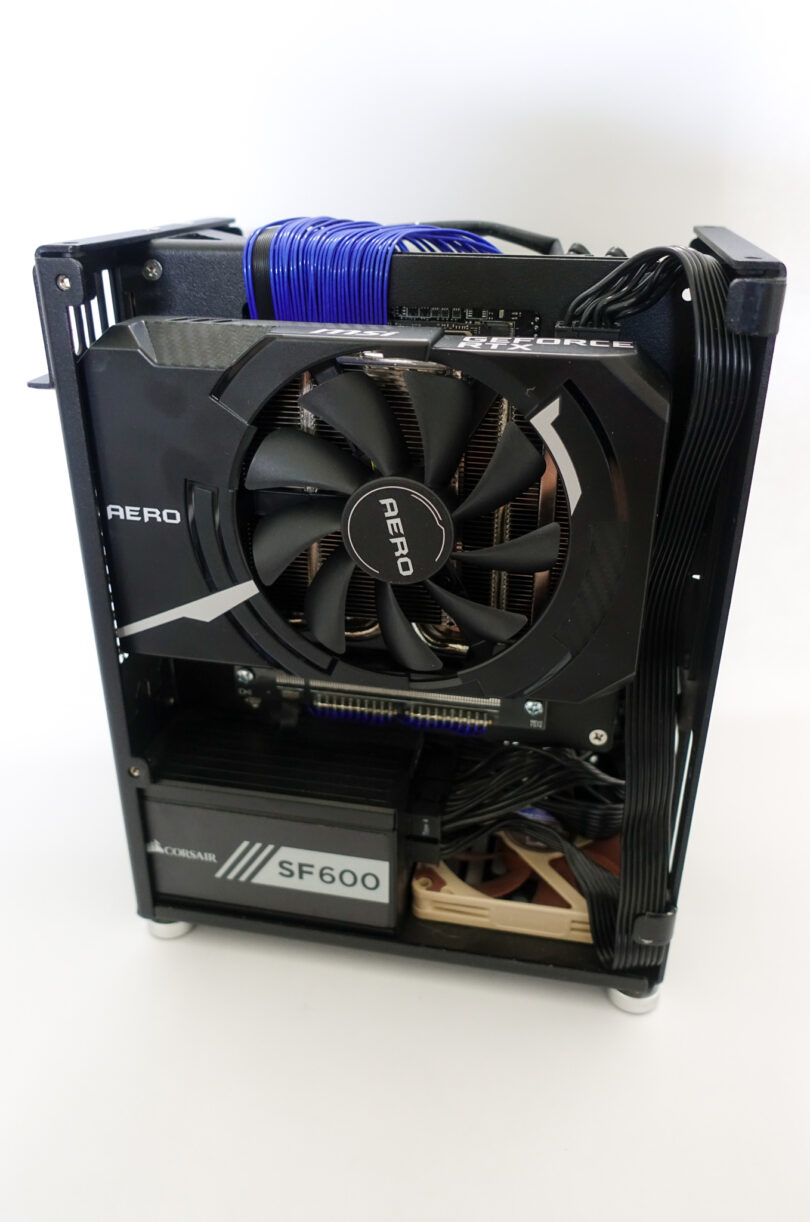 Let’s dive into the benchmarks. I’ve rounded the percentage improvements to keep things simple. I also want to reiterate that we turned all of these games up to their absolute maximum graphics settings in every category the menus allowed access to.

Dirt 5 is the latest game for the Dirt series from Codemasters. It uses a modified version of the OnRush engine, and includes ray traced shadows. 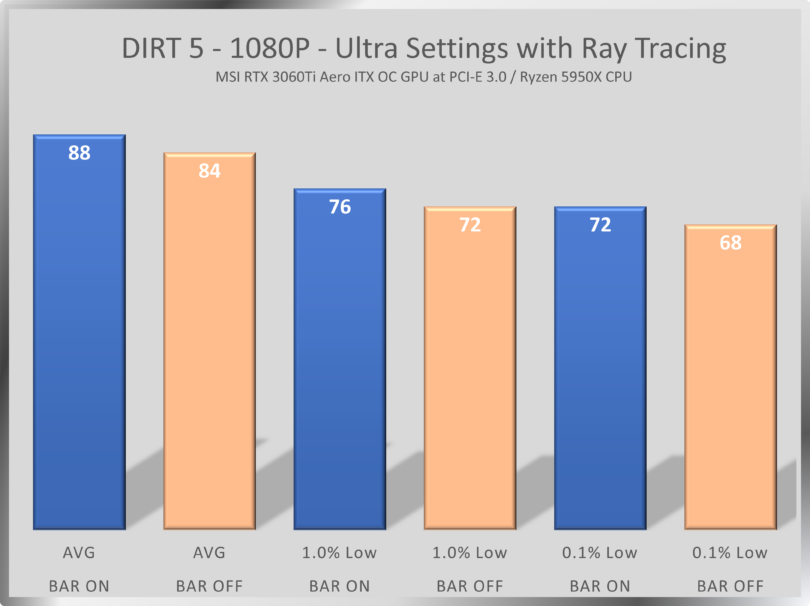 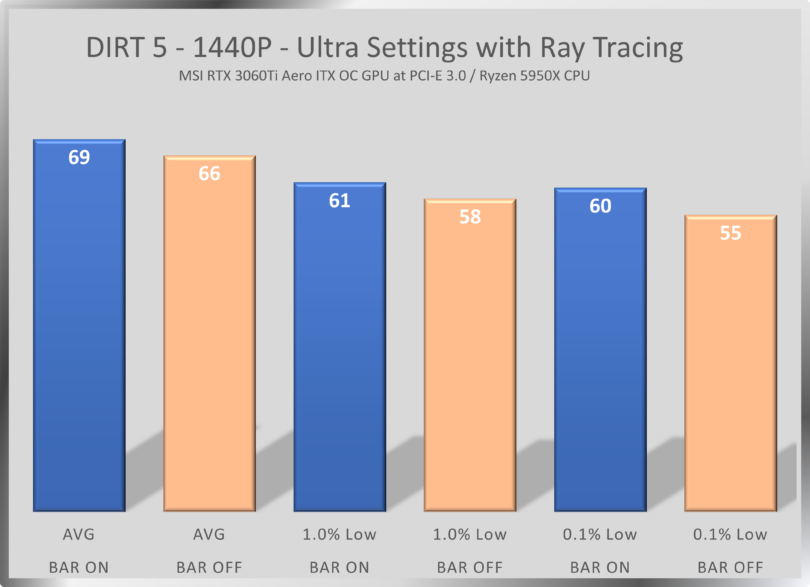 At 1440P we have a 4.5% increase in the average frame rate. The 1.0% low score improves by 5.2%,  and the 0.1% low score improves by a massive 9.1%. What this translates to is that with Resizable BAR on, Dirt 5 at 1440P can be a nearly locked 60FPS game. Without BAR it will suffer some drops into the mid 55FPS range. Without a VRR (Gsync/Freesync) monitor, these would be seen as hitches, stutters, or tears depending on your settings. 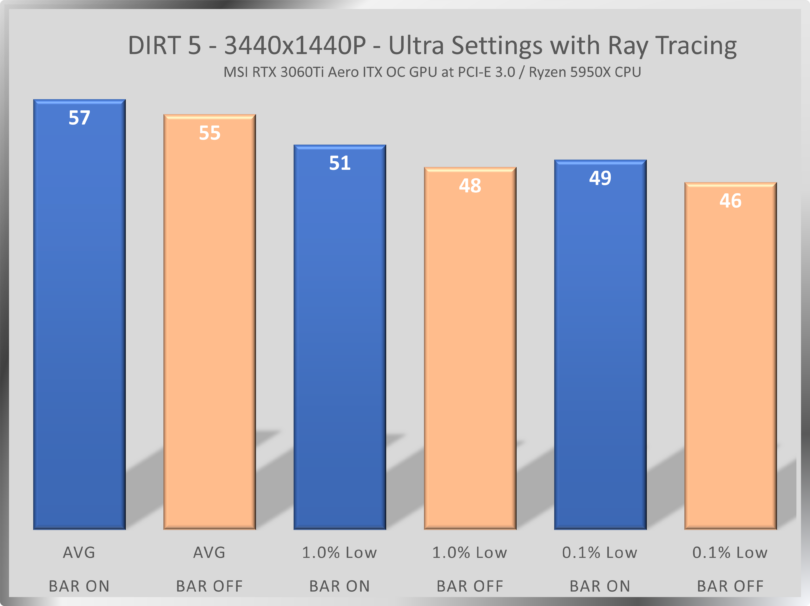 This is a clear showing that Resizable BAR can provide a respectable uplift to your gaming performance in Dirt 5.

F1 2021 is the latest iteration of the F1 franchise, and is also developed by Codemasters. Unlike Dirt 5, F1 2021 is built on the EGO Engine 4.0. As with Dirt 5, it’s a cross generation game, but does support ray tracing. 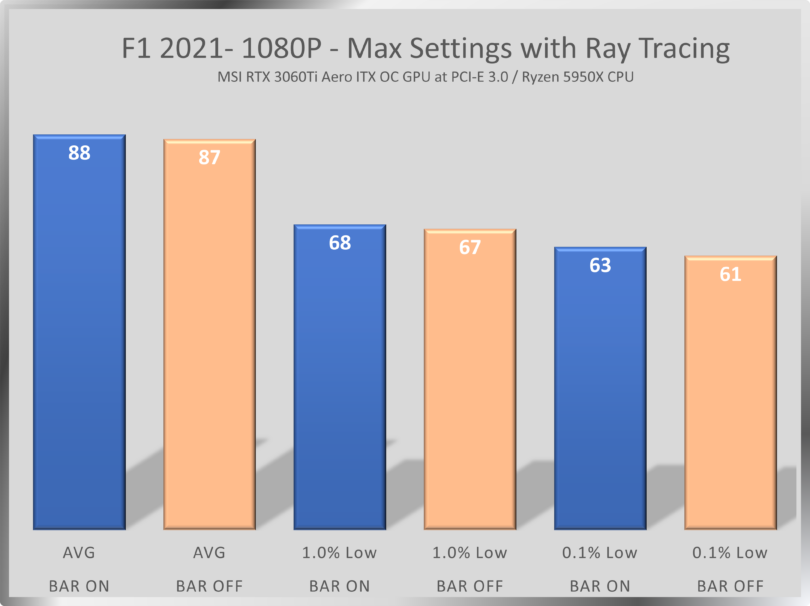 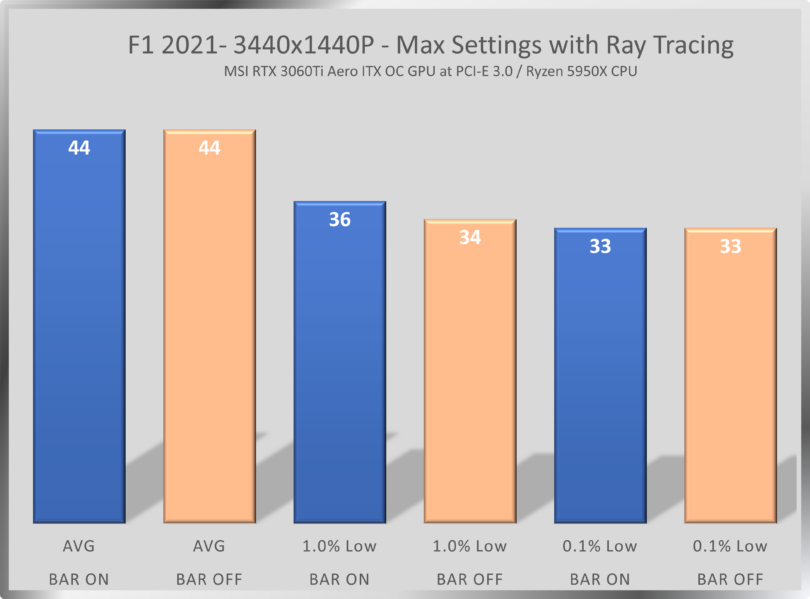 F1 2021 is an example of a game that doesn’t show much improvement with Resizable Bar turned on in our test setup. Most changes are just about within margin-of-error, though Ultrawide 3440x1440P showed a gain in the lowest 1.0%.

Forza Horizon 4 is an open-world racing game set in Great Britain. Sadly, I have not located Clarkson’s Farm while playing it.

All joking aside, the game was released in 2018 on the ForzaTech engine. It’s a cross-generational game, and has shown a good uplift in previous Resizable BAR articles from reputable outlets when using high-end hardware. However, when we tested with our mid-range RTX 3060Ti at PCIe 3.0, we did not see the same level of performance improvement. Let’s start with 1080P. 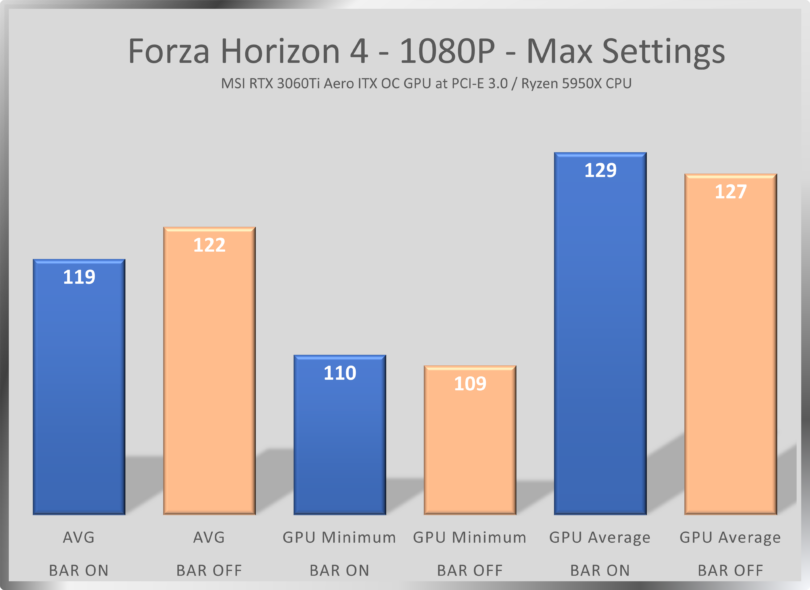 At 1080P with BAR on,  there was a 2.5% loss to the average frame with it dropping from 122 by 119. However, both the GPU minimum frame rate and the GPU average frame saw improvements of 0.9% and 1.6% respectively. Anything below 1% is considered margin of error during our testing so effectively the GPU minimum gain is hit or miss. 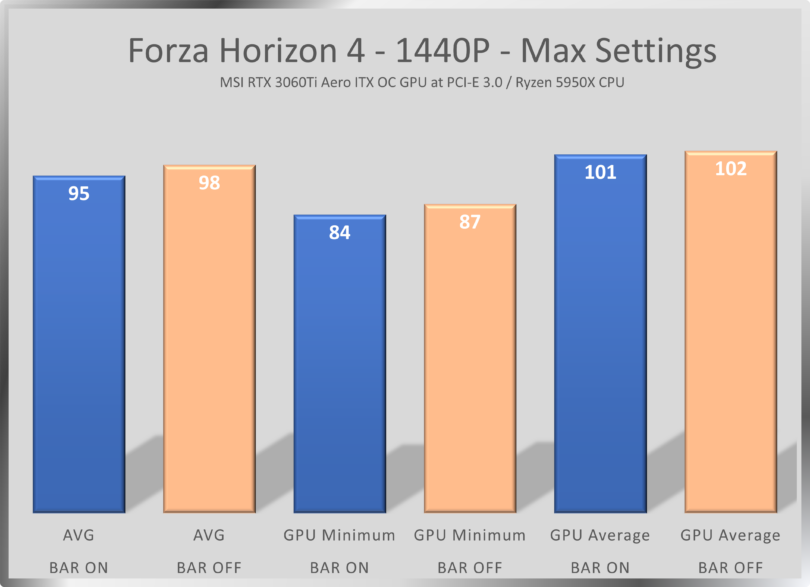 At 1440P we saw a degradation of all performance metrics in the game by turning on Resizable Bar. There was a 3.1% loss on average, with a 3.4% loss for the GPU minimum. This does not match what has been observed with a PCIe 4.0 interface, and RTX 3080s and 3090s. 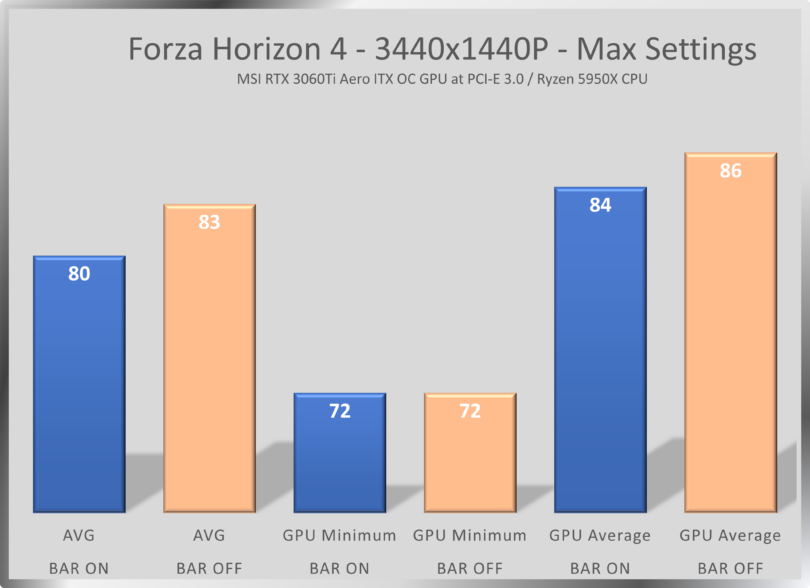 Our results did not meet what we expected to see, and are a good example of an errant behavior a user might find when comparing to their favorite tech benchmarks. While the loss of performance isn’t dramatic, it’s repeatable. What is the cause? To find out it would require a deeper dive with multiple 3060Tis, different test beds, and additional hardware.  Unfortunately, I don’t have an Intel test system with Resizable BAR to compare, nor do I have an RTX 3080 or 3090. However, I will go back to this at some point in the future when I have additional testing equipment.

Gears of War 5 is the latest in the series, runs on the Unreal Engine, and is developed by the people who helped design the engine itself. 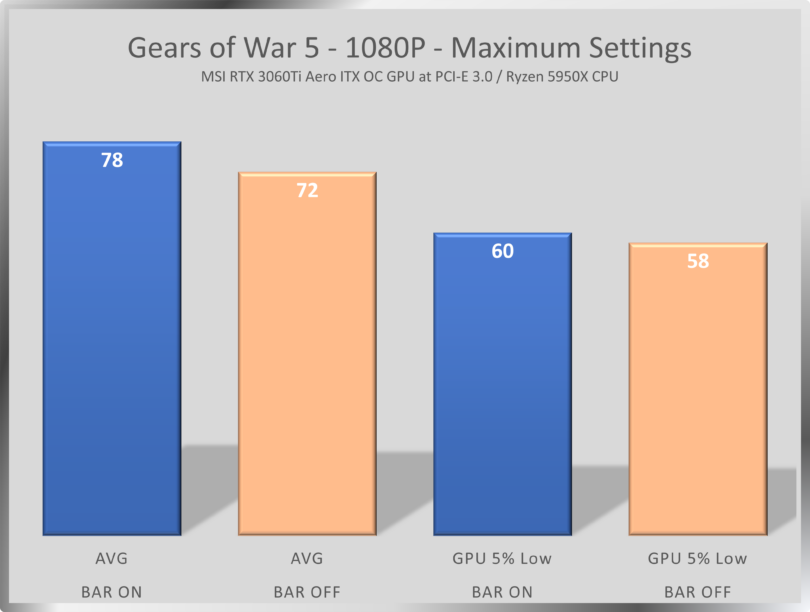 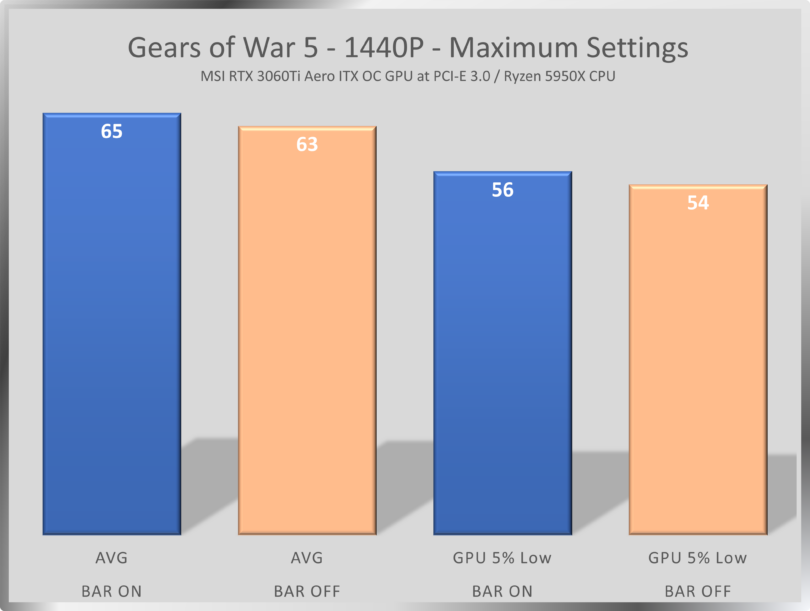 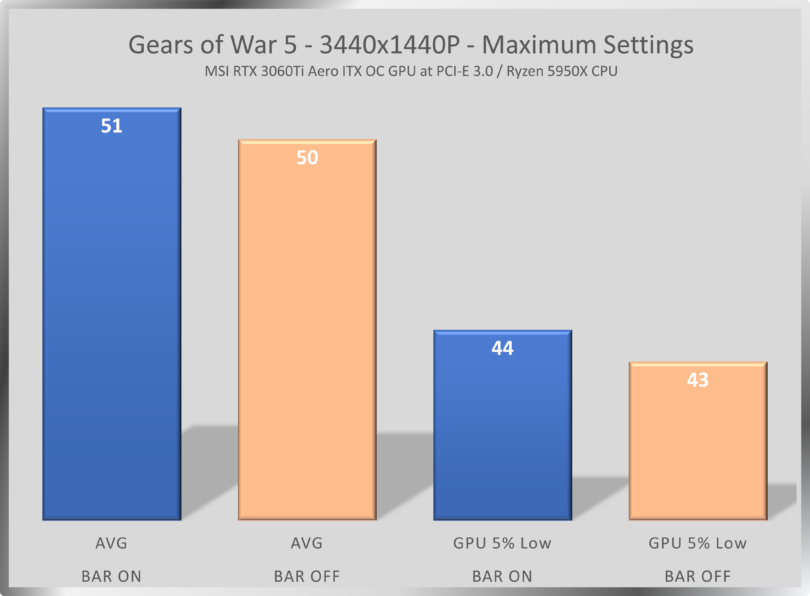 At Ultrawide 3440x1440P we continue to see an improvement with BAR on, but with diminishing returns. There was a 2% increase for average FPS, and a 2.3% improvement for GPU 5% lows.

Gears 5 clearly benefits from having Resizable BAR on. However, there are diminishing returns the higher the resolution rises on our test platform.

Guerrilla Games’ Horizon Zero Dawn had a shaky release on the PC, but is still a popular game. It uses the Decima engine, and has a vast open-world. It has one of the longest built-in benchmarks tested today, and showed consistent behavior. 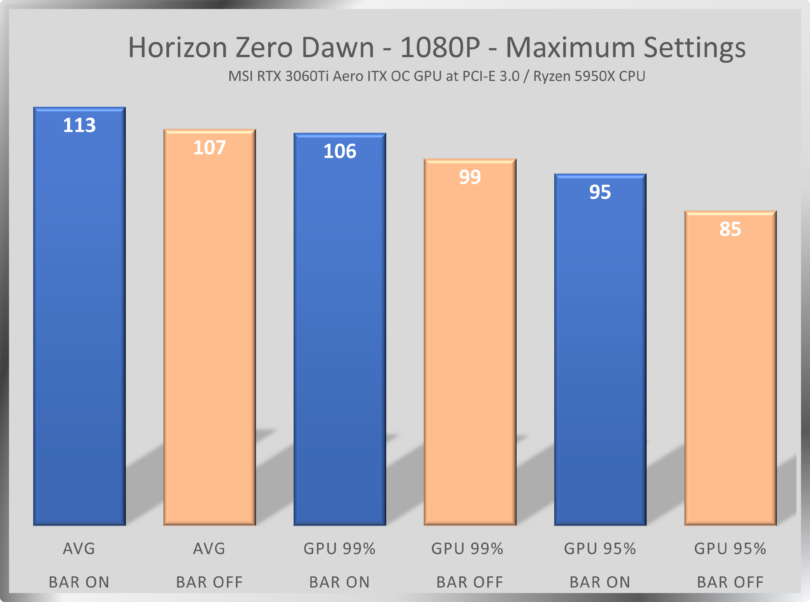 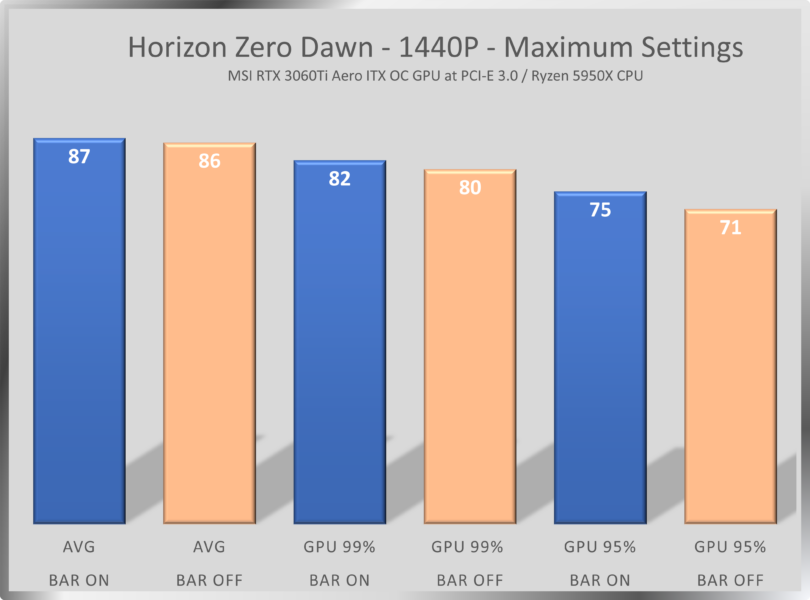 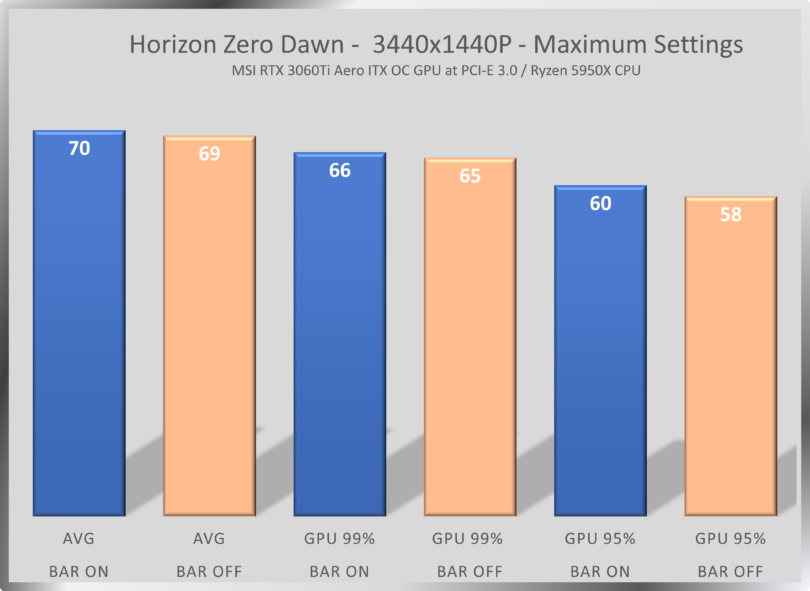 What we see with Horizon Zero Dawn is a small but consistent improvement to the average FPS in 1440P and above resolutions, while also observing a solid improvement in the GPU 95% measure. At 1080P, it was across the board better.

Shadow of the Tomb Raider

Shadow of the Tomb Raider is the latest in Lara Croft’s exploits, and supports modern GPU features including ray tracing. It can push a mid-range GPU down to a console like 30FPS levels with all features turned on, and runs on the Foundation Engine. 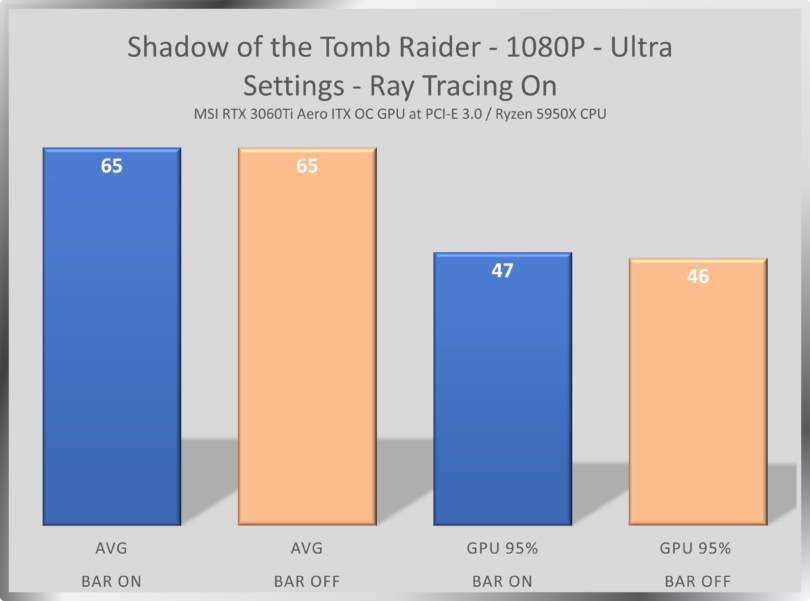 At 1080P, there was little benefit to turning out Resizable BAR. There was only an improvement of 2.2% on the GPU 95% metric. 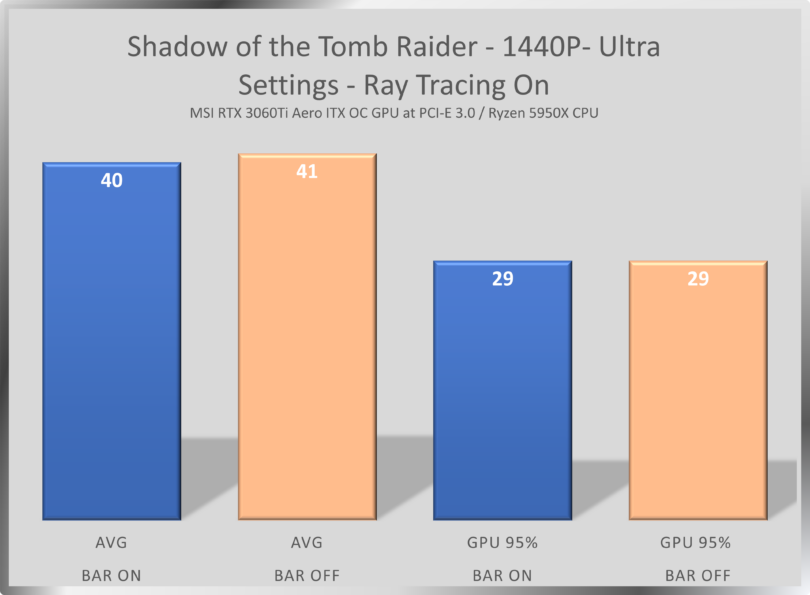 At 1440P,  we again see virtually no difference between BAR on and BAR off. There was a 2.4% regression in performance for the average frame rate which dropped from 41 to 40 across our 3 pass test run. 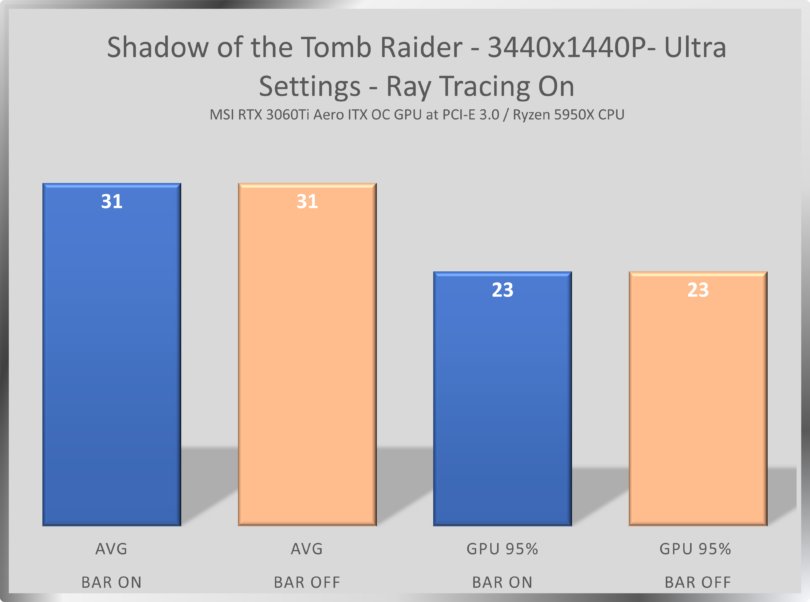 Shadow of the Tomb Raider just doesn’t care about Resizable BAR on our test setup. There was small benefit at 1080P, but not something to get excited about.

However, our final game will throw this test on its head.

Before we begin, I want to state that the results were so weird for Borderlands 3 that I reran them three times, and almost didn’t include them. That’s 9 passes instead of 3. Moreover, I also tried DX11 vs DX12 to search for the issue. Overall, I ran 72 benchmark passes by hand, and I still came up with these numbers. I will go back and investigate this at a later time when we have additional test equipment. For now though, I will share the results we have.

Borderlands 3 runs on the Unreal Engine like Gears of War 5. The results here show how the engine alone doesn’t guarantee performance. 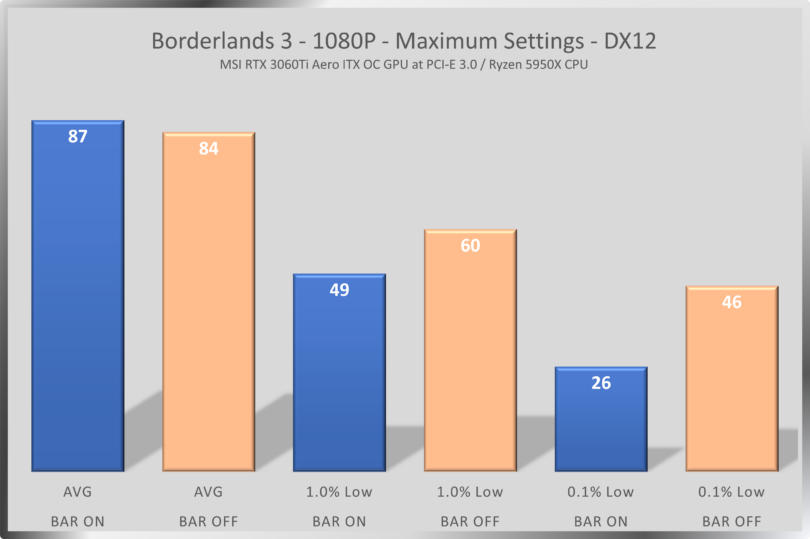 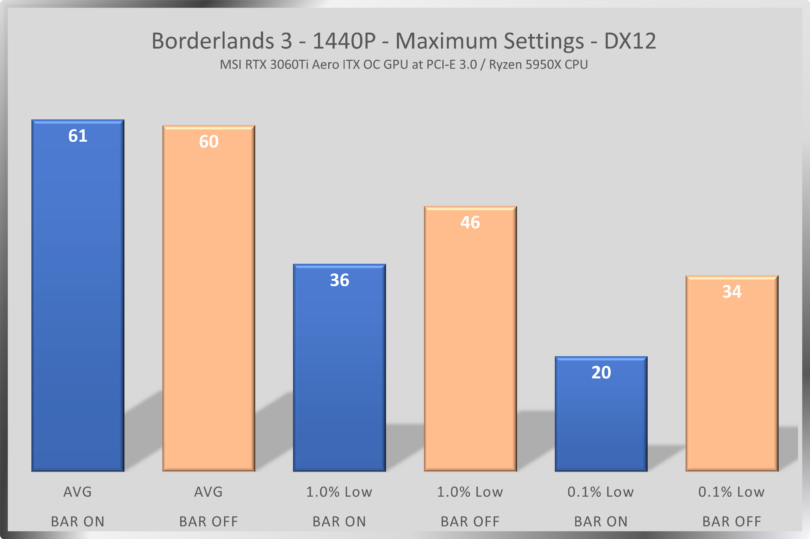 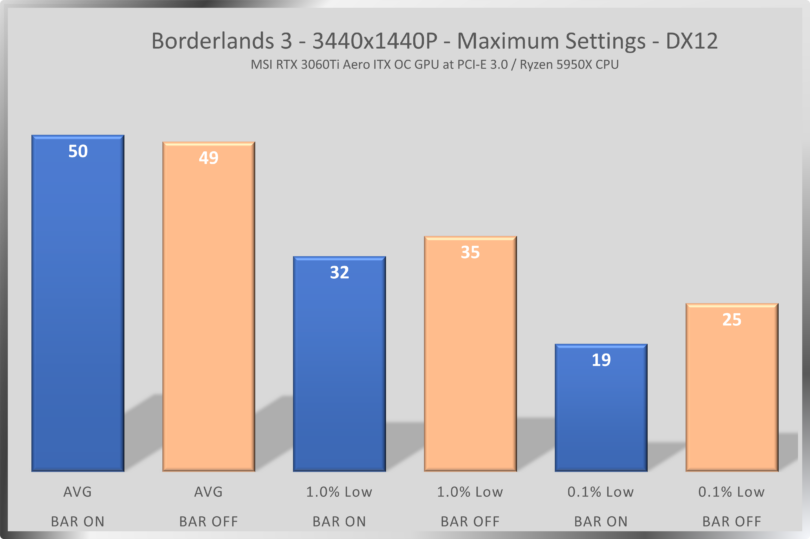 I’ve reached out to other reviewers, and the consensus was that there is something wrong with the shader compilation as the results from DX11 were drastically different. As soon as I have another setup with Resizable BAR, I’ll revisit it. In the mean time, I’m just going slowly back away and hit the dusty trail toward DX11. 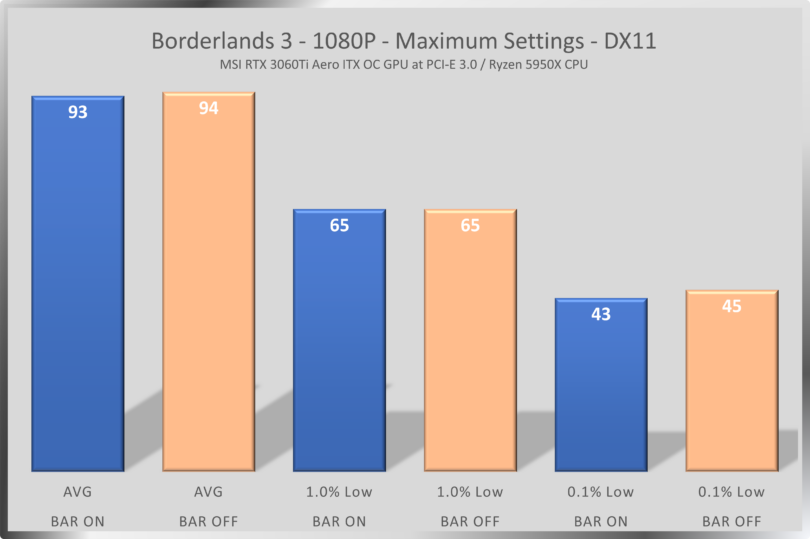 DX11 at 1080P definitely improves the performance of Resizable Bar, but it still trails leaving BAR off. 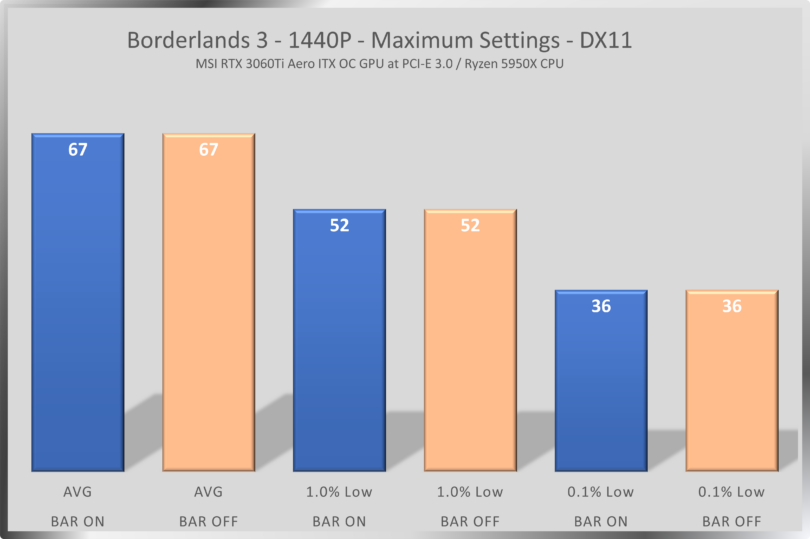 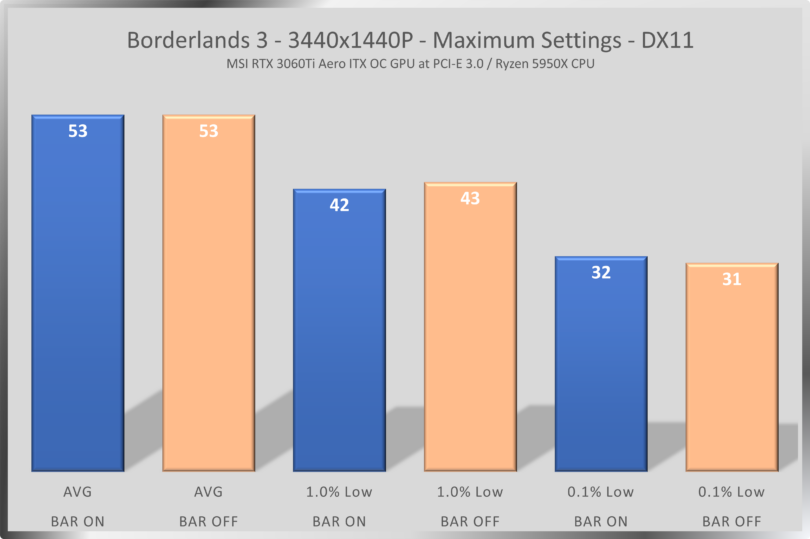 AT 3440x1440P we start to see a trend of Resizable BAR improving performance for Borderlands 3 at higher resolutions.

Basically put, DX12 Borderlands was mess when Resizable BAR was on. DX11 was far better, but still slower. This is not consistent with what other reviewers who used high-end test beds reported. This is an issue that I intend to revisit when our test benches expand, but for right now I suggest you test your individual system with BAR on and BAR off when it comes to Borderlands, and always read multiple reviews.

Four of the seven games that were tested with Resizable BAR turned on showed benefits up to nearly 12%, but typically in the the 3 to 6% region. In one game there was basically no difference, and one game saw a general degradation of performance.

…And then we have Borderlands 3 in DX12 mode. This game was a akin to a train derailing, crashing through the glass of the Orca tank at Sea World, spilling thousands of gallons of fuel into the water of the tank which then ignites into a crimson volcanic blaze sending the now flaming whales and burning water threw the demolished glass into the crowd; all while the trainers are dancing to the friendly music that’s played during the show. It was that bad.

Borderlands 3 in DX11 mode showed little or no difference though.

So what’s the verdict? Generally, it’s not going to hurt you to have Resizable BAR on. In most of the games tested, it provided a benefit and a good benefit at that. If you notice unusual behavior in your game of choice, you can easily disable BAR in the BIOS. Personally, I’ll be leaving it on until I see a reason not to.

But what are your thoughts? We invite you to come to the SFF.Network Forum and discuss this, and any other article, with us. Even if you have a giant E-ATX case like the Coolermaster Stacker 830 that arrived as I was typing this, you’re always welcome. We might try to convert you to SFF though…One of us…One of us…ONE OF US!