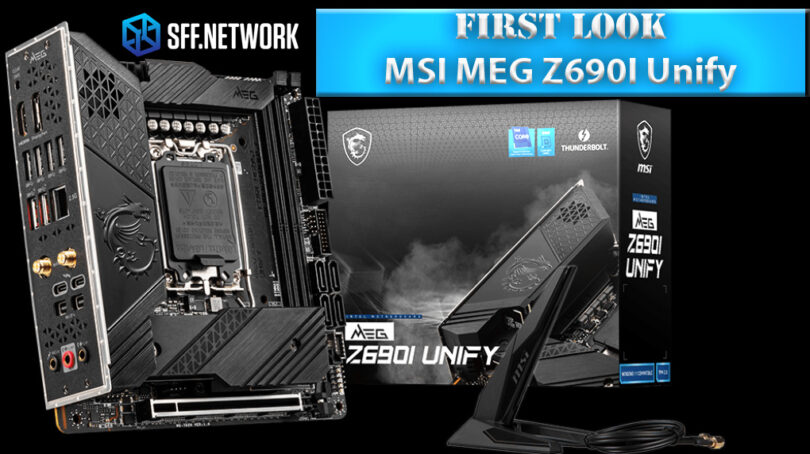 Alder Lake is upon us and has set the small form factor world on fire. Well, maybe not on fire but damn close as the 12900K can easily hit 100C even with a 360mm distinctly-not-SFF AIO. Still, because of this Chernobyl reactor fire of a CPU, we are treated to the new Z690 chipset which offers some compelling new features. MSI has put together one of the most interesting and compelling Z690 ITX boards so far, so let’s take a quick look at it before I start torturing it on our test bench.

Thanks to MSI for sending us this review sample. Credit goes to MSI for not including any conditions or restrictions. They simply sent it.

ITX boards are almost always more expensive than there ATX counterparts. Compounding this, the Z690 chipset has been particularly expensive for this generation. Retailing for $399, this is not a budget motherboard. Thankfully MSI has included numerous premium features into the Meg Z690I Unify’s design.

These are all standard features that are on most premium Z690 ITX boards. What isn’t is something I and the SFF community have been asking for, for a long time…

Finally. We finally have a board that supports not one, not two, but three M.2 drives. The first drive runs directly off the the CPU PCIe 4.0 x 4 lanes. The other two run off the chipset lanes. One is PCIe 3.0 and one is PCIe 4.0. Admittedly, I would have preferred if all of them were PCIe 4.0, but PCIe 3.0 NVME SSDs still produce speeds over 3000MB/s which is more than enough to edit 8K video, load any game, and was top end not long ago. Regardless though, I happily will drop a PCIe 3.0 NVME drive into my rig if it means I can actually have three drives in total.

And for the truly adventurous that have a little spare room in their case, you can always use an M.2 to PCIe adapter.

I’ve worked with some “premium” ITX boards which had so few USB ports that a USB hub should have been included in the box. Personally, I already run a Creative X7 external USB DAC for audio, a USB external video capture unit, wireless Lightspeed mouse and keyboard, USB headset, and a wireless Xbox controller on my personal rig. Thankfully MSI has provide an excellent amount of of USB ports on the MEG Z690I Unify which includes:

That’s what’s on the inside. On the back you get:

That’s a lot of numbers and confusing names, but let me break it down like this:

Most people only associate Thunderbolt with external GPUs. Of course, if you’re buying this class of motherboard, it’s unlikely that you will use an external GPU. However, what you might use, and I could certainly use, is an external drive bay for large scale storage.

Several new NAS  devices have included not only standard ethernet connectivity, but also a direct connection via Thunderbolt. This is something that can be incredibly useful for people who use their NAS for video editing. Filming even a short video can often generate over 100GB of footage. Being able to quickly import and export those files into your main editing PC, while also having the peace of mind that they’re on redundant storage, is something very useful. If your NAS is populated with SSDs, you can even use it as your primary project location. The MEG Z690I Unify would allow for this, while also giving you a massive amount of internal NVME storage.

Another example of the usefulness of this is if you want to connect external video capture devices. 4K60FPS external capture units with pass through are just starting to make its way onto the market at a consumer level. ITX boards without fast enough ports are simply out of luck. This will not be the case for the MEG Z690I Unify.

One last scenario. Thunderbolt 4 ports are easily fast enough to allow for external card cages. Imagine you have a lower bandwidth PCIe card that you simply most have access to. You can purchase and external PCIe cage, plug it in there, and use Thunderbolt 4 for the connection to the mainboard.

On top of all of this, you get four SATA 6Gb/s ports for hard drives or SSDs, 2.5Gbps ethernet, and WiFi 6E. Additionally, keep in mind that the Thunderbolt rear ports are backward compatible with USB C standards including USB 4 (20Gbps).

Connectivity and storage of this level is a rare sight in the ITX motherboard world.

However, I do take issue with one aspect of this; the lack of a 10Gbps ethernet port. This is a $400 board ITX board. 10Gbps ethernet should be a standard feature at this price level; especially on a board you know can’t be easily upgraded, if at all, in the future. Yes, you can use a USB to ethernet adapter. However, they aren’t cheap and their performance isn’t nearly as good as the real thing as of writing. We will address this issue more when we conduct the formal review.

MSI has heavily advertised the cooling technology included with the Meg Z690I Unify. This includes a heat-pipe L-shaped heatsink covering the VRM with an active cooling fan, aluminum backplate, and M.2 passive heastinks on two of the three slots. The thermal pads are listed at 7W/mk which is nice to see OEMs releasing that info. 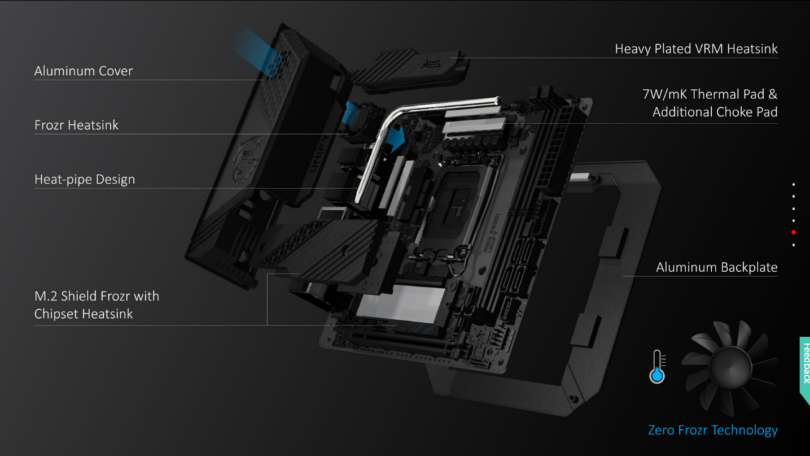 The VRM seems to be one of the strongest claimed in any Z690 ITX board with a 10+1+1 design. MSI states they are using 105A smart power stages with Titanium Chokes. I will be the first to admit I’m not Buildzoid as he is the experts in this field. That said, based on what MSI has listed and shown, I suspect they won’t have any performance issues. I also appreciate the active cooling for the VRM so long as the fan doesn’t get too loud. Regardless, we’ll find out for certain when we put our i9-12900K test CPU in it.

The Rest of What’s In The Box

Aside from the standard fair of cables and M.2 screws, MSI has included a couple extra goodies in the box. A case badge and stickers are nice for those that like them, but the interesting thing is the cleaning brush and keychain screw bits. It’s not really necessary, but nice to have.

I have to admit, this is a nice looking board. It’s got a nice dark metallic finish to it, accented with chromed metal. There is a subtle diamond or triangle pattern woven into the design on the front and back. The heatsinks, while not true finned arrays, have diagonal lines that flow in the same direction. It also supports just about every lighting app out there. Overall the Meg Z690I Unify looks very good to my eye.

One thing that is of concern however is the height of the cooling blocks. This could become an issue with low profile air coolers used in many SFF designs. As such it appears and AIO is the way to go for this board. Regardless, I’ll be taking a closer look in the near future.

We’ve gone out and purchased a 12900K and 32GB of DDR5-5600 for the upcoming review. They’ve arrived, so look forward to the upcoming review in the next week or so. We plan to really test out if MSI lived up to their claims. If you have anything specific you would like to see, let us known in the comments.

Check back soon for the full review.