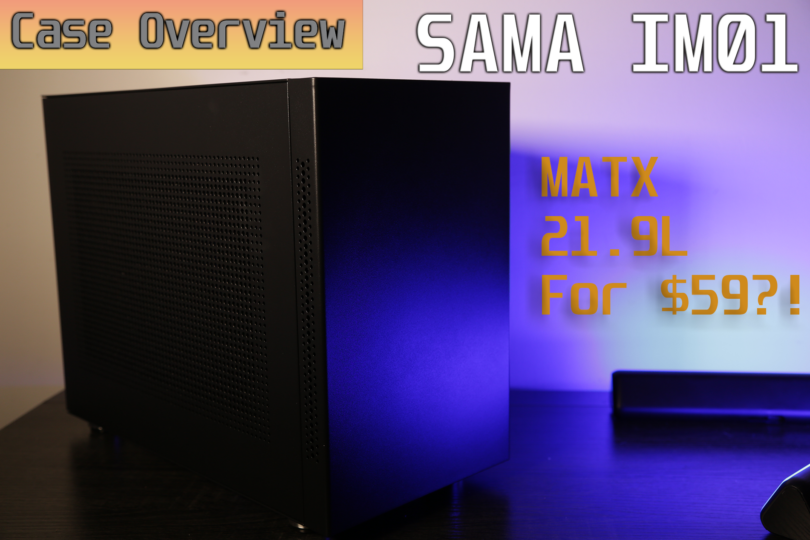 We at SFF.Network are still working out the details of our new case testing methodology. However, we still want to profile and feature some of the cases that our readers are interested in. For now, we’re going to be doing some case overviews that go over the details and our impressions prior to the build and testing. So what case will start this series? Top of the line custom case? Dan A4-H20? Ghost S1? 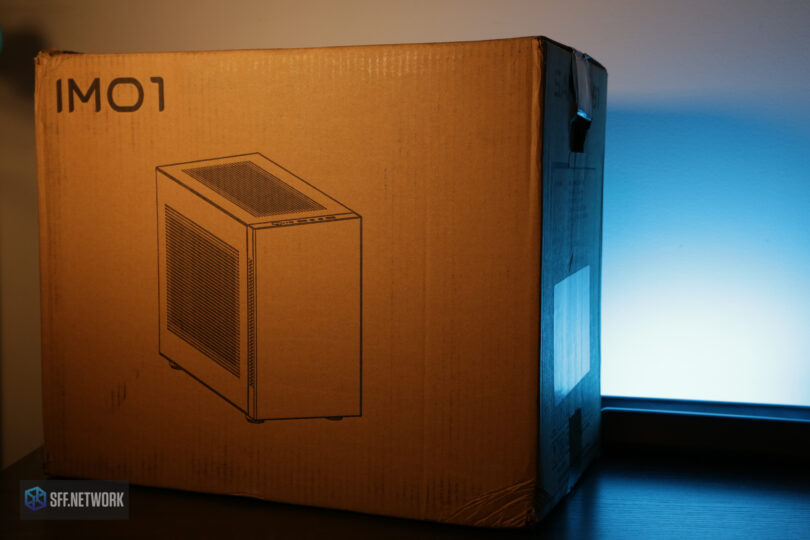 I purchased the SAMA IM01 during a New Egg sale for just $59, and it typically sells for $69. It’s a 21.9L case that supports MATX and ITX, and is has been a bargain interest in the SFF world. How much does $59 buy you? In terms of compatibility, quite a bit. Build quality though is a different story. 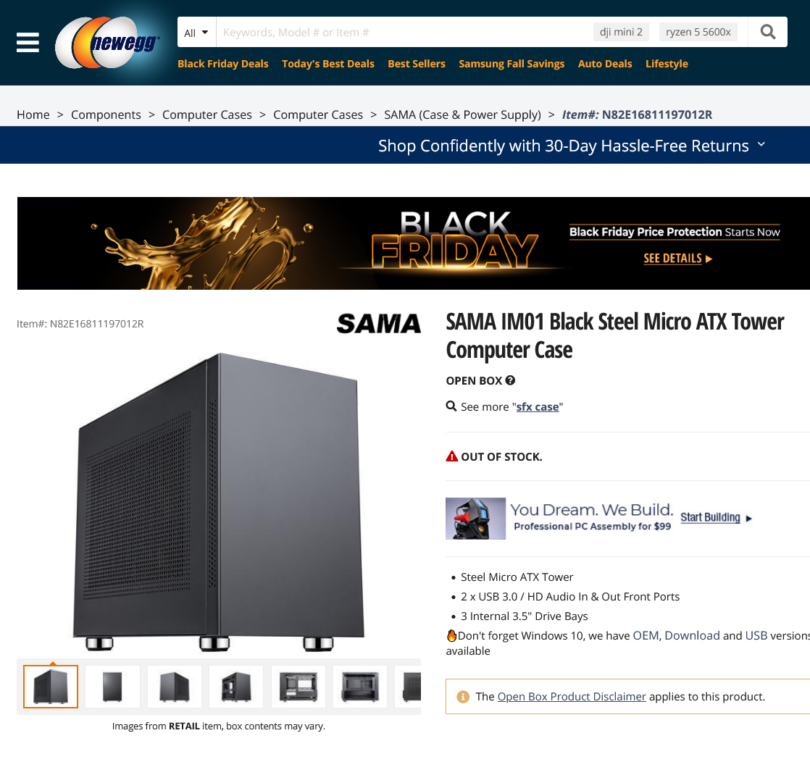 Beauty is in the eye of the beholder, and I think SAMA did a great job with the design of the IM01. It has a very clean design that looks like an NCASE M1 had a child with an NZXT. The ventilation patterns are nicely tapered, and there should be plenty of airflow. You can choose to horizontally or vertically mount your GPU, and all major air intake areas have nice magnet filters on them that are admittedly better than some high-end cases.

One aspect of design that is often not discussed is the presentation. SAMA did a nice job packaging the IM01.It comes covered in a black cloth material instead of typical plastics, and all of the included screws are neatly labeled in a plastic container with dividers. I’ve purchased cases for $250 that just seem to throw the screws randomly in a bag, and stuff them in the case.

The front IO is mounted on top of the front panel of the case. It features a headphone, mic, and two USB 3.0 ports. A very pleasant surprise when removing the front panel is that there are no wires from the front IO attached to it. You can pull it off without worrying about the cables.

Most of the panels are fairly easy to remove from the hard plastic push pins that hold them. However, the side panels are held in so tightly that I needed a screw driver to pry them apart.

A tempered glass model is produced but was unavailable when I ordered this one.

The rear of the case is completely ventilated, as is the bottom. The bottom itself is removable, and can be used for either fans or hard drive storage.

The AIO mount is a NCASE M1 style side mount, and there is an 80mm exhaust fan.

Let’s get this out of the way; the SAMA IM01 is made entirely of steel attached with plastic clips, and the fitment shows. There are some panel gap issues in addition to sharp edges, and cheap plastic fasteners.

The paint has a nice matte finish to it, but is easily chipped and scratched. Out of the box, there was some paint flaking around the corners. I performed a scratch test using a flat-head screwdriver. The first line is with a light amount of pressure placed on the screwdriver. The second line is from the weight of the screwdriver alone. Clearly the paint job is nowhere as well done as even based model NZXTs cases. However, if you’re looking to do a custom paint job, at least it won’t be hard to remove it.

If there is one thing the SAMA IM01 has above all else, it’s compatibility. The MATX board support opens up a lot of options for larger boards, but more importantly, it allows for larger modern GPUs to be used.With some GPUs now taking three or even four slots, this has become a concern in the community. Compounded with the lack of availability of modern GPUs, and the take-what-you-can-get attitude of retailers, most people don’t have much choice of which GPU they can get.

CPU cooler height is up to 155mm, or you can mount an AIO on the side-panel akin to the NCASE M1. If you choose to use the ATX power supply bracket, you will be limited to 120mm AIOs.

As mentioned above, the case includes an ATX PSU bracket, but comes stock with the SFX PSU bracket installed. 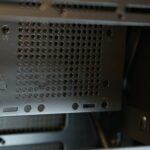 As for drives, you can mount up to five 3.5 inch drives, and up to seven 2.5 inch drives. However, this will interfere with cooler and fan placement.

Only a single fan is included in the form of an 80mm fan on the rear. However, there are places for up to seven fans in the case. 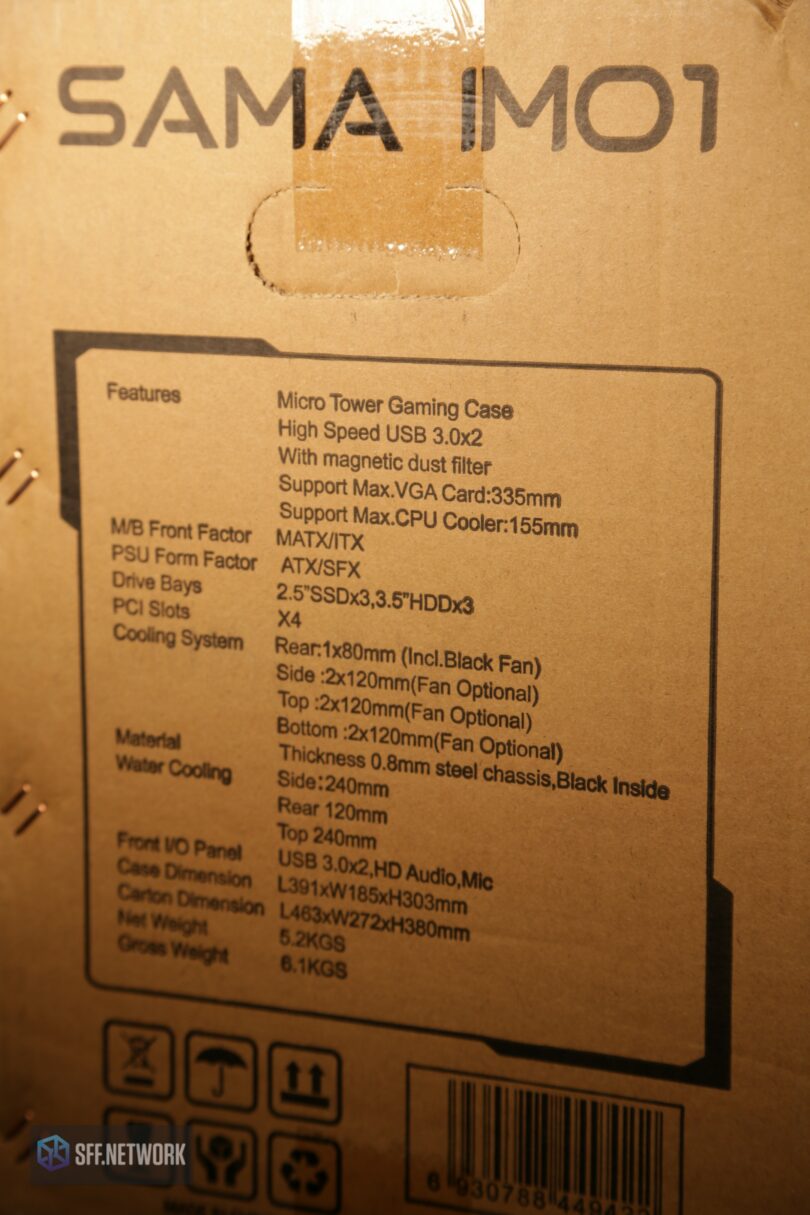 It seems SAMA has tried very hard to present their case well, and in many ways succeeds. It certainly is packaged and featured like a premium product, but the build quality of the one I received leaves much to be desired even for a lower priced case. The panel fitment is uneven, and the paint quality is flaky. There is a lot of room for improvement in those regards.  How it performs will have to wait until we have our test setup complete, but I suspect it will perform fairly well. Prior to doing any testing, I will hold of on the recommendations.

Have you built a system with a SAMA IM01? Let us know in the SFF.Network forums. We welcome all SFF enthusiasts and look forward to hearing from more members of the community whether you have a tiny pre-built, are just interested in SFF cases,  or have a custom made case of your own design.