Logic Supply is known for making high-quality industrial products. Lately, however, they’ve released some cases and systems that fit into the consumer space as well. The most recent example of this: the CL100, their latest NUC-style aluminum and steel fanless PC. The ruggedized mini system aims to work either as an HTPC, or industrial workstation computer. All in a neat and tidy profile.

The CL100 is powered by Intel’s latest 4-Core Celeron N3150 Braswell processor. It features dual RAM slots, and room for one mSATA drive. 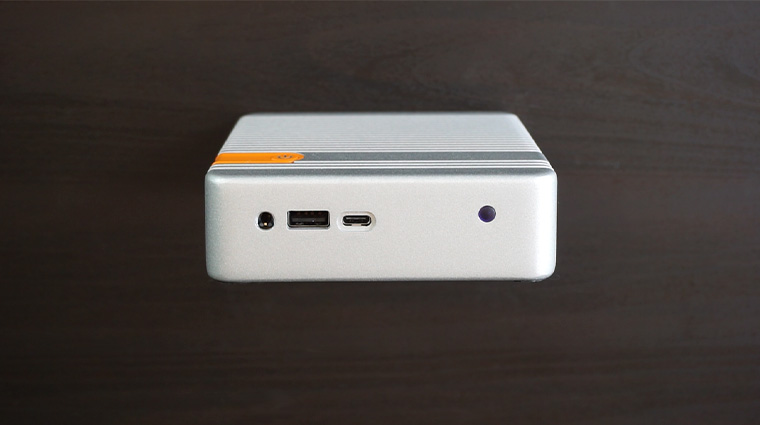 On the front of the CL100, you’ll find a headphone jack, USB3.0 port, and USB3.0 Type-C port. Not robust connectivity, but the basics are all there. 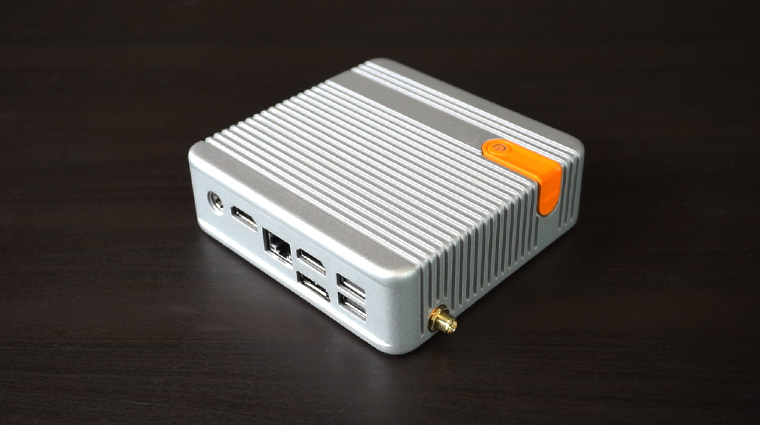 Around back, you have the power port, dual HDMI, LAN, DisplayPort, and 2 additional USB3 ports. Each side has a mounting point for WiFi antennas as well. You’ll notice that the orange power button wraps around the left side – this is done so that you can use the button from the top or side of the system. Which, admittedly sounds like a small feature, but it could be extremely useful if your system is wall mounted or placed in a tight space. It’s a thoughtful inclusion, to say the least. 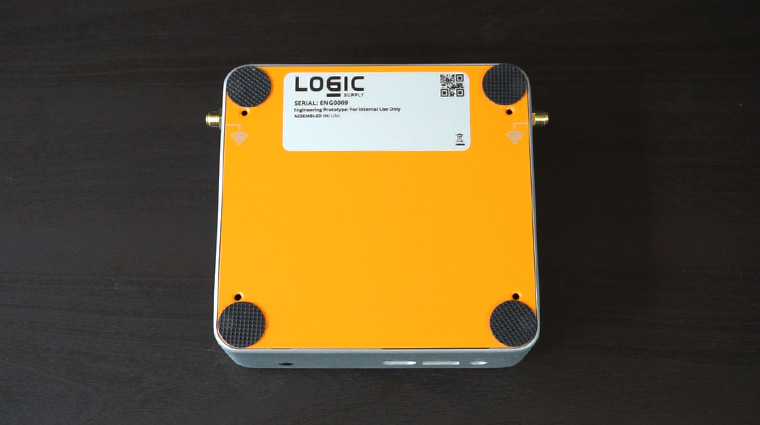 The underside of the CL100 has a simple steel base plate with four mounting holes, and rubber feet at each corner.  There are additional rubber feet included in the package that raise the device up about a quarter of an inch, if needed.

The unit feels solid in the hand, It was definitely built to take a beating. The aluminum top cover in particular feels sturdy enough to stand on (although I didn’t test this). All-in-all, the build quality is a huge step up from the typical plastic shelled NUC’s i’ve used in the the past. Perhaps that’s to be expected, given the industrial roots.

Let’s start with the obvious: if you’re buying a system like this, you shouldn’t be expecting a ton of performance. Logic Supply put a low powered mobile Celeron chip in the CL100 for a reason. That said, when it comes to that intangible fluidity of everyday use, I found that basic navigation through Windows 10 was snappy.

The CL100 has enough juice to handle basic tasks like word processing, spreadsheets, and multi-tab web browsing with relative ease. Chrome, Firefox, Safari, and Edge all ran smoothly, even with multiple tabs (10 total) displaying flash based content. That should be among the more demanding tasks that a user would reliably hammer the computer with, and it has enough horsepower to tackle it.

Go much beyond that, though, and limitations do appear. The weaknesses of the Celeron N3150 started to show when I attempted to edit large multi-layer Photoshop projects, as the chip struggled to perform processing in real time. Furthermore, doing any editing with Premier Pro or After Effects was completely out of the question – you’re not going to eek out even passable performance with pro apps on this machine.

The CL100 scored an 805 overall in the Passmark system performance test. This falls in line with what you should expect from this CPU, so no surprises.

Having a fancy aluminum chassis/heatsink is all well and good, but it’s all for naught if the system can’t cool itself properly. Given the fan and heatsink-less nature of the unit, that’s of particular concern since passive cooling is acutely affected by the temperature (among other factors) of the surrounding environment, which can be quite demanding in an industrial context. With that in the back of our minds, I can happily report that Logic Supply did not let me down: the CL100 cooled the 4-Core Celeron N3150 admirably even while running Prime95, which is a fairly unrealistic representation of maxed-out real-world workloads. It hit a max temp of 65C on Core #1, and the rest of the cores hovered between 58-61C. These temps are excellent for a passively cooled system under load, though perhaps we shouldn’t be surprised given the fact that’s it’s perhaps a bit over-engineered for use on our desk (not that that’s a bad thing!).

The system does get warm to the touch, but never hot. The top of the unit feels similar to the bottom of an adequately cooled laptop. In our book, that’s completely acceptable.

If you’re looking into getting a CL100 to use as an HTPC you will be pleased. I tested MOV, H.264, AVCHD, MP4, and AVI files in various resolutions from 480p to 4K using VLC and Windows Media Player. It handled everything I threw at it with relative ease. I didn’t notice any artifacts, skipping or hiccups. Though you’ll obviously be a bit limited with local storage, that can be remedied with an external drive or by streaming content from a third party service (such as Netflix) or from local content stored on a NAS. You’ve got options!

In fact, to reflect those choices, I also tested the unit by streaming 1080p and 4K content from YouTube, Netflix, and Amazon Instant. The CL100 handled this with no problem as well, offering a smooth playback experience. I could see this being a great little system to run Plex.

The CL100 ranges in price from $347.00 to $817.00. You can upgrade the RAM, SSD, and OS via Logic Supply’s easy to use configurator. It is important to note, however, that the base price does not include an OS (once again pulling from the industrial roots of Logic Supply’s customer base, as many industrial use cases will require customers to load their own Linux distro and software, obviating the need for an included OS).

After using the CL100 for about a month as an HTPC, I have to say that I really like it. You can’t game on it, which perhaps limits the appeal, but it’s the perfect machine to tuck away behind your TV and connect to a NAS. If you can keep yourself from going crazy on the option sheets, you will have an affordable mini PC that should serve you well for years to come, with 4K establishing the pinnacle of content for the foreseeable future.

If you’re in the market for a rugged industrial workstation PC, the CL100 should feel right at home there as well. It’s built like a tank, and Logic Supply sells dust covers for any unused ports along with extended warranties should you need them. They’re that serious about durability!