Heatpipe Direct Contact – buzzwords from a bygone era when heatsink technology hadn’t quite reached the peak it is at now. However, there may still be performance to be gained from this technology – especially in smaller form factors where getting the heat to the cooling fins is of utmost priority – a heatsoaking solid baseplate may not be the best option.

SilverStone has launched the Argon Series AR11  – a 47mm high heatsink with a blend of old and new technology. Let’s see how it performs! 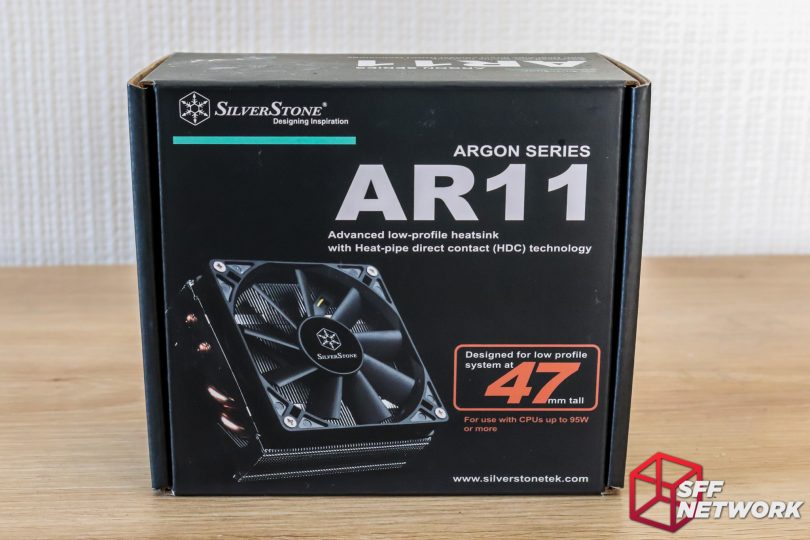 Dark and stylish packaging. I do think a trick was missed here though – argon gas in a light glows purple! 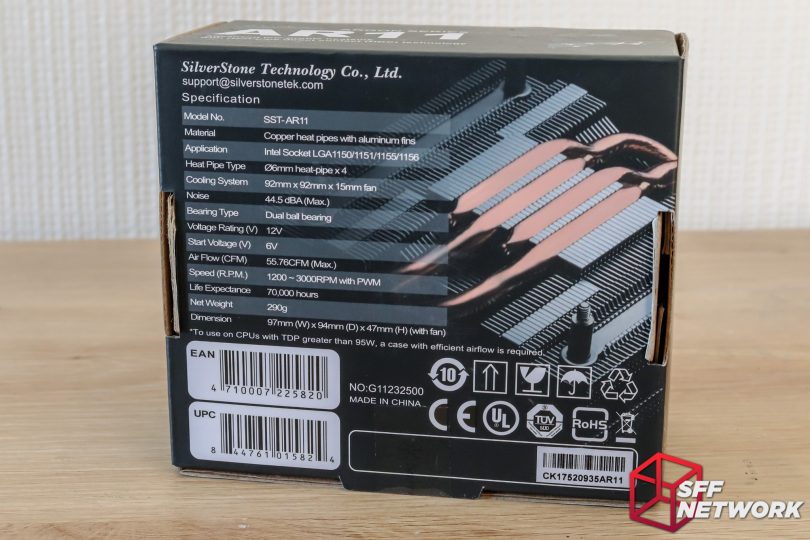 The direct touch heatpipes are on display on the rear of the box – along with a bunch of specs that I reproduced above. 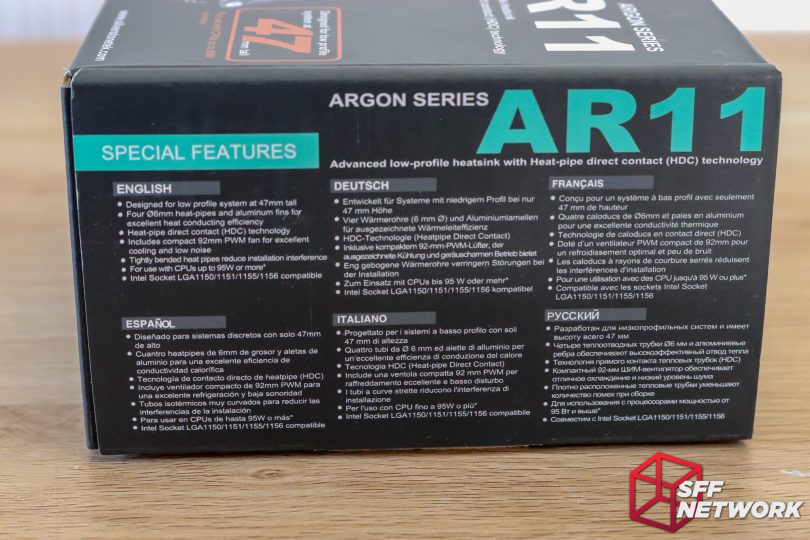 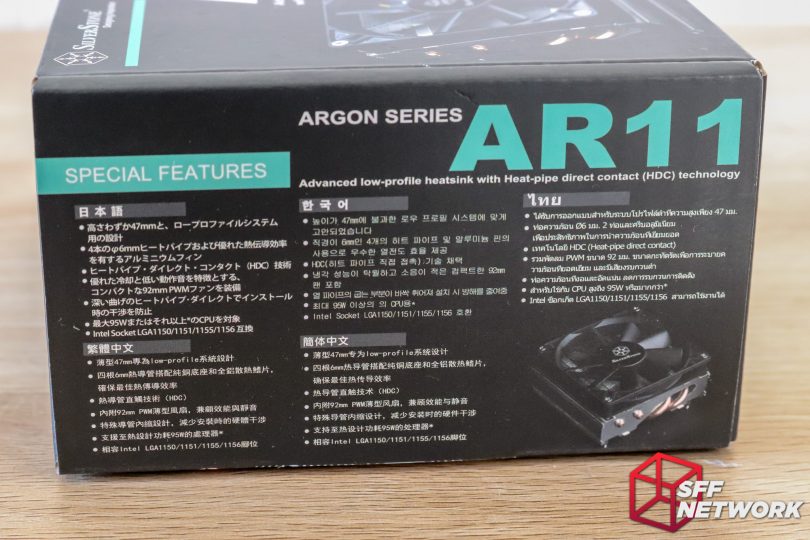 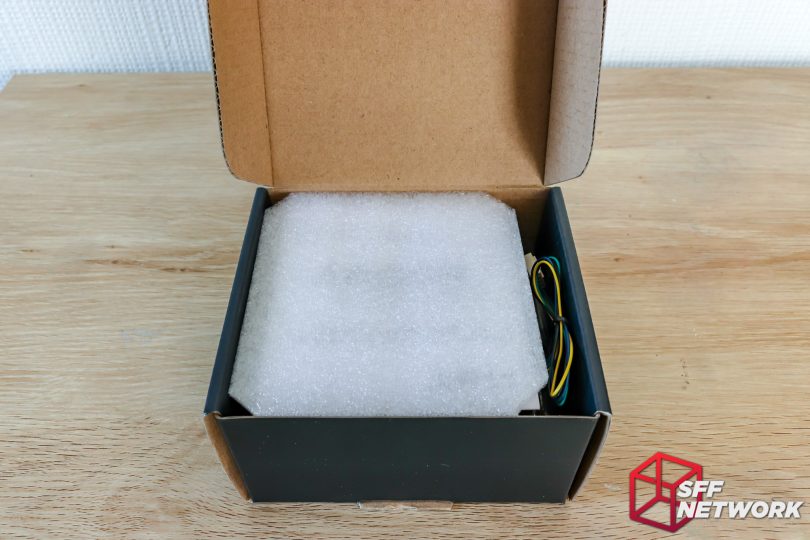 Opening the box, we see.. foam. Mmmm foam. Silverstone – how about some more eco-friendly packaging, even a cardboard square would perform a similar role here. Polyethylene foam like this is a pain to recycle. Not many localities have facilities to process it – meaning that it will end up either in landfills or burnt. 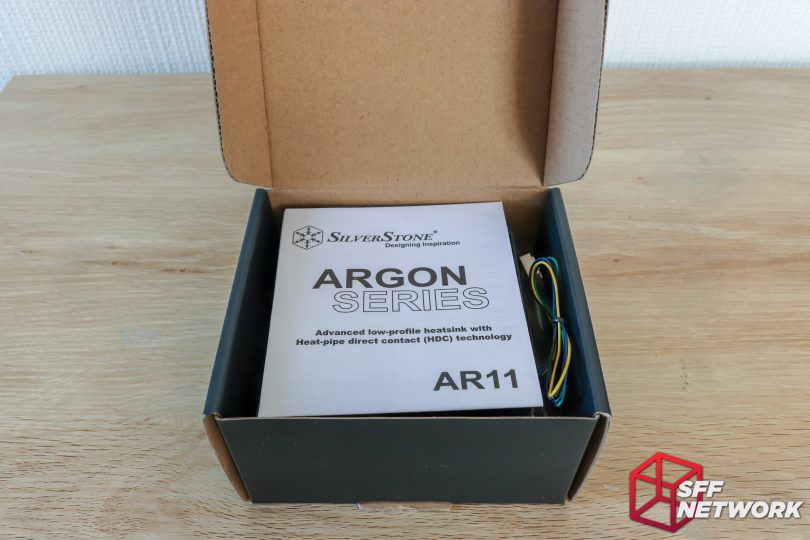 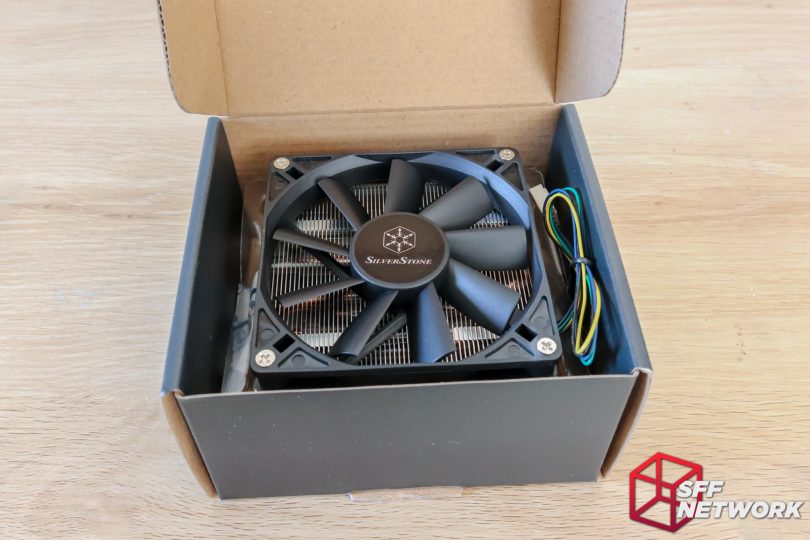 And the cooler itself! Well protected in a plastic shell. 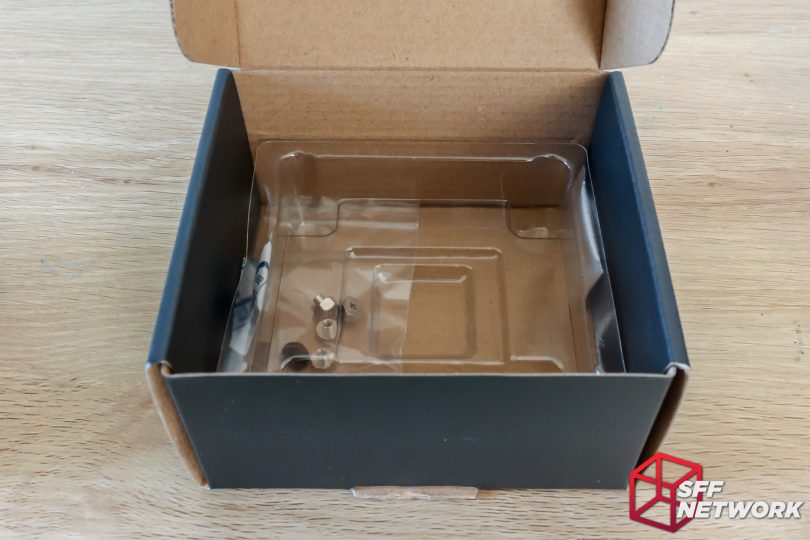 The PETE plastic shell here is easily recyclable.. Still, cardboard could have been a better choice. 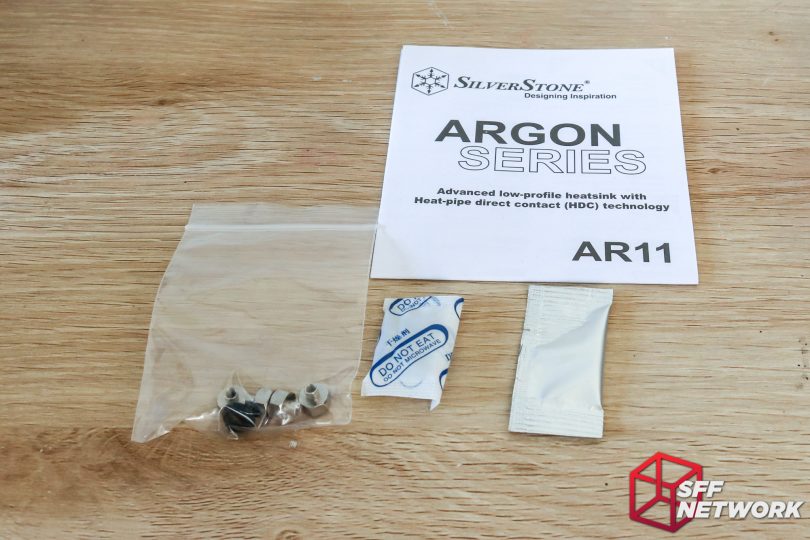 The included accessories are sparse, considering the current retail price of US$39 at NewEgg.com, a scant $1 cheaper than the venerable Noctua NH-L9i. The aforementioned Noctua cooler includes a plethora of accessories, including mounting screws for taller fans and a generous amount of thermal paste. 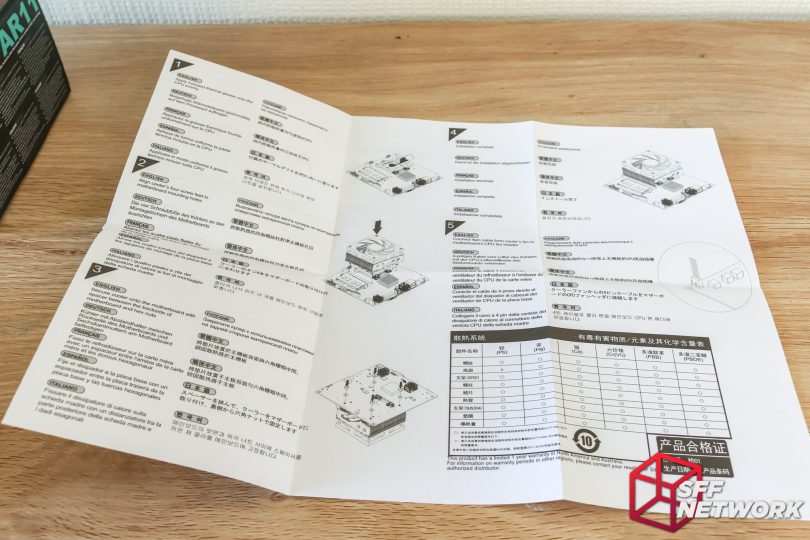 Installation instructions are clear – and interestingly, feature a thin-ITX board, which is something I haven’t seen before. 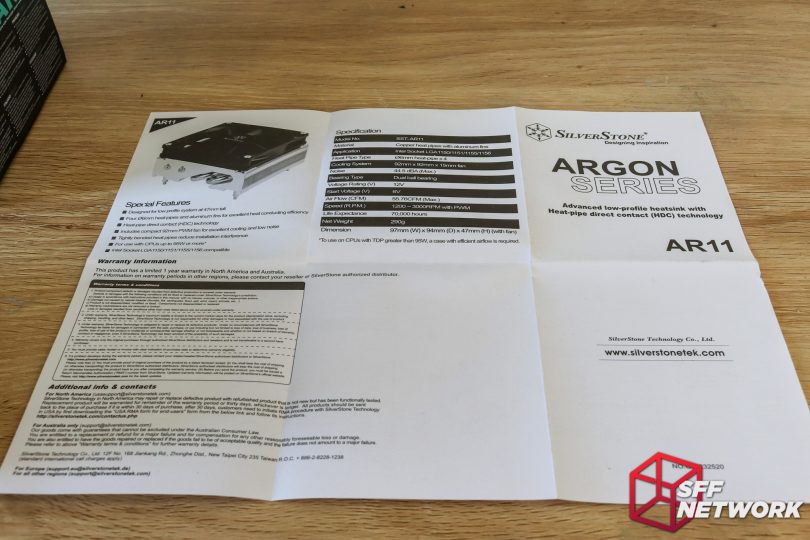 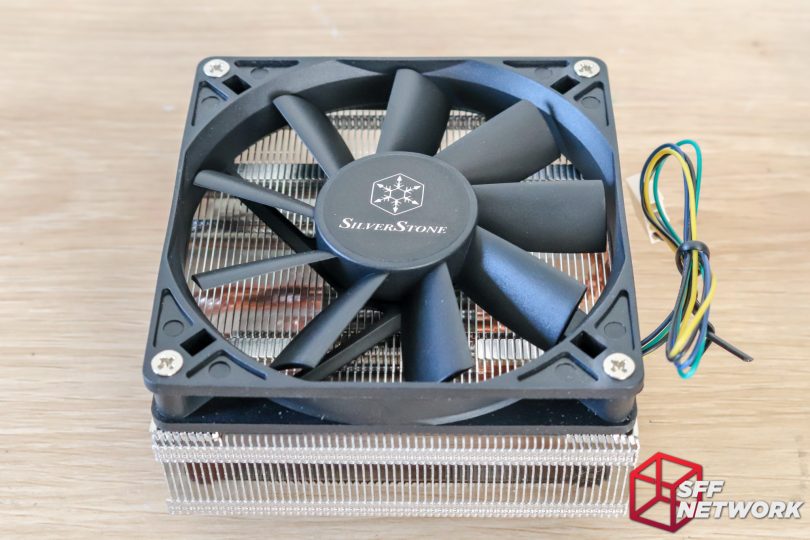 An interesting fan design choice – 9 thin blades with a steep angle of attack. I’m not sold on such a design when combined with a dense fin stack such as a cooler – a view validated in testing below.  The 15mm thick fan is mounted with a quartet of M3 screws. Alas, the cable is as rainbow as the RGB trend – black wires would have gone a long way for aesthetics here. 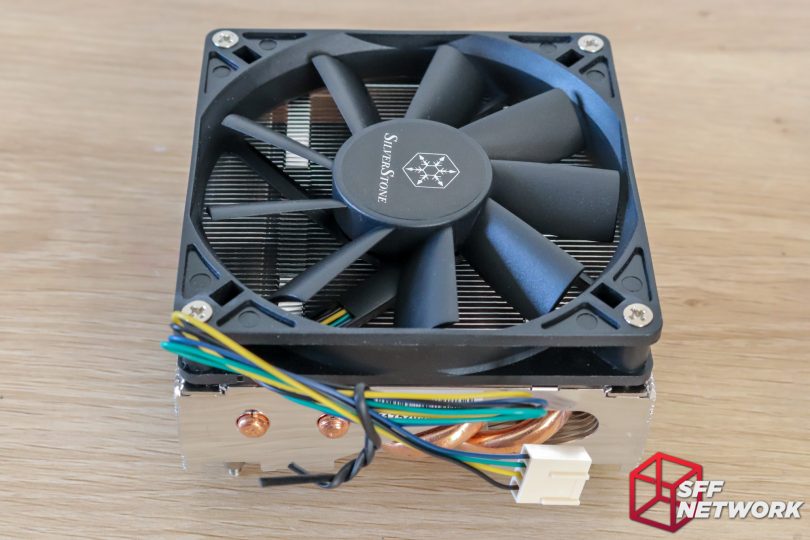 A bare aesthetic is applied – no nickel plating, just bare copper and aluminium. 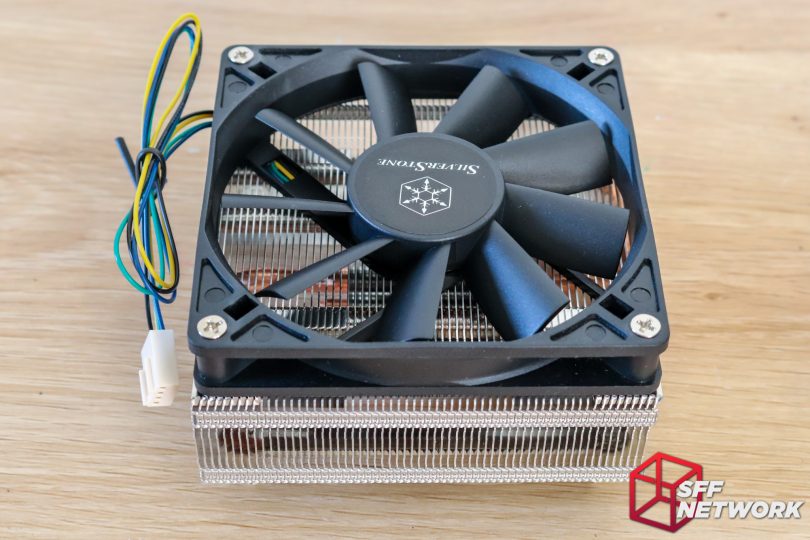 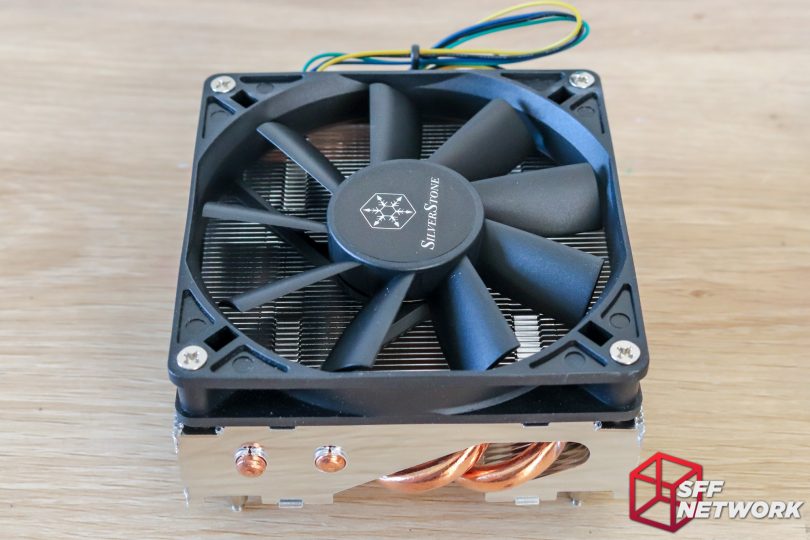 With four 6mm heatpipes, the Argon AR11 looks to be a decent performer. 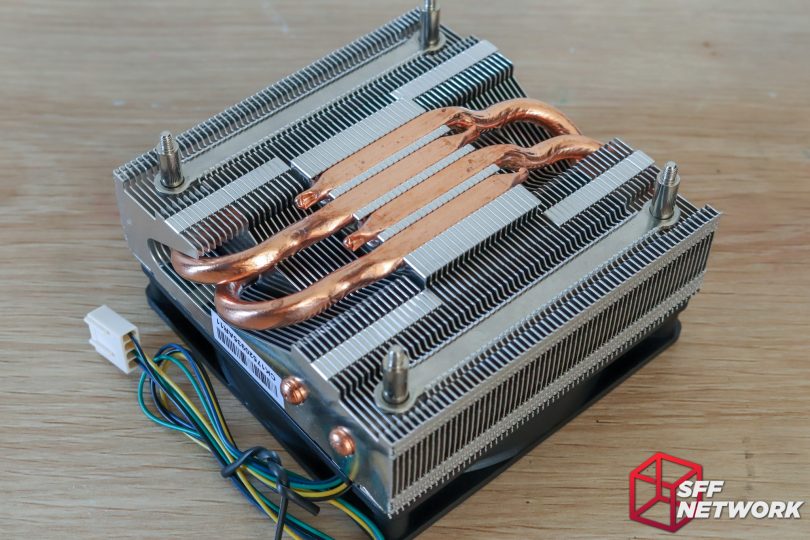 Two of the heatpipes head off in each direction – spreading the heat throughout the cooler. No solid base here, just folded aluminium fins. 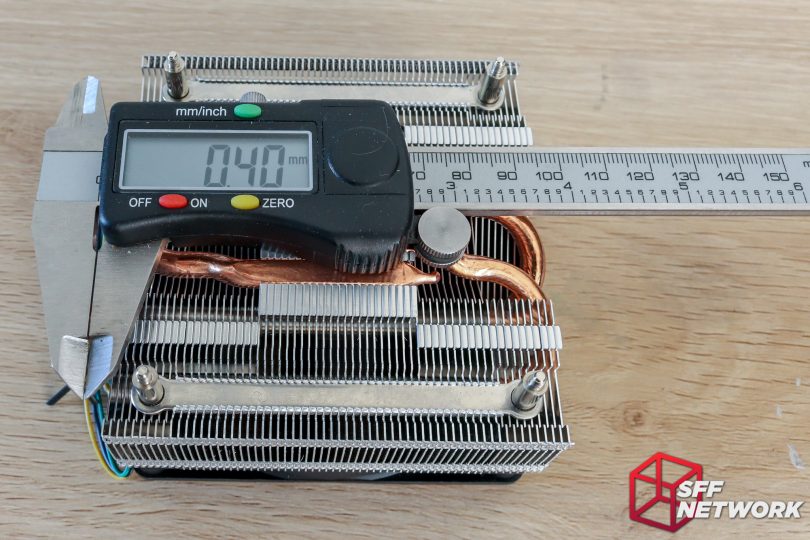 Each fin measures in at around 0.4mm thick, with a fin spacing of 1.3mm. Mounting standoffs are mounted in a solid steel strip – no AMD platforms for this cooler, folks. 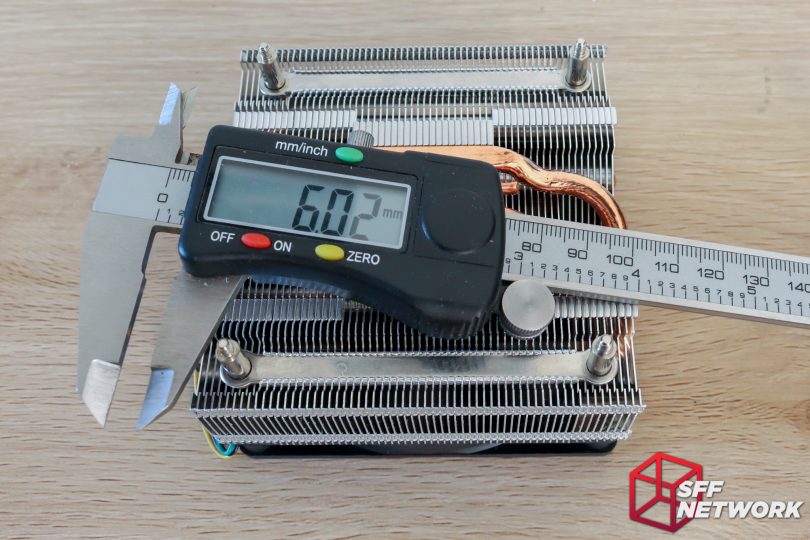 Yep, the heatpipes are indeed 6mm. 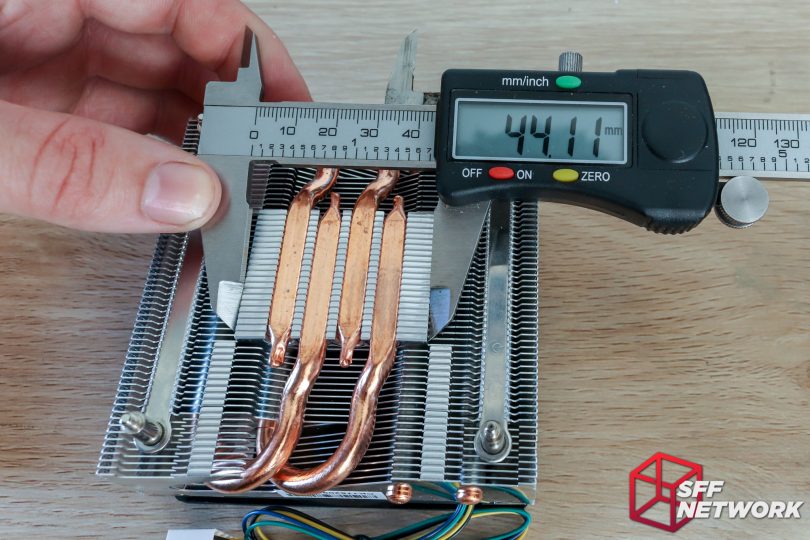 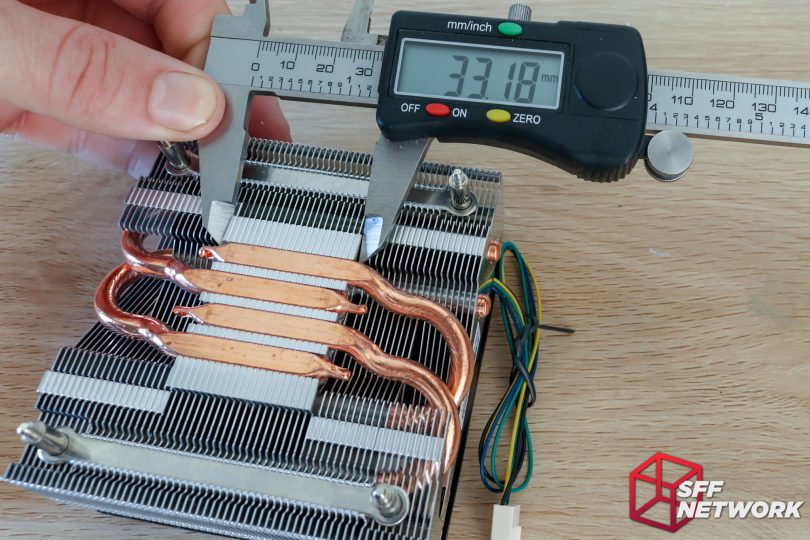 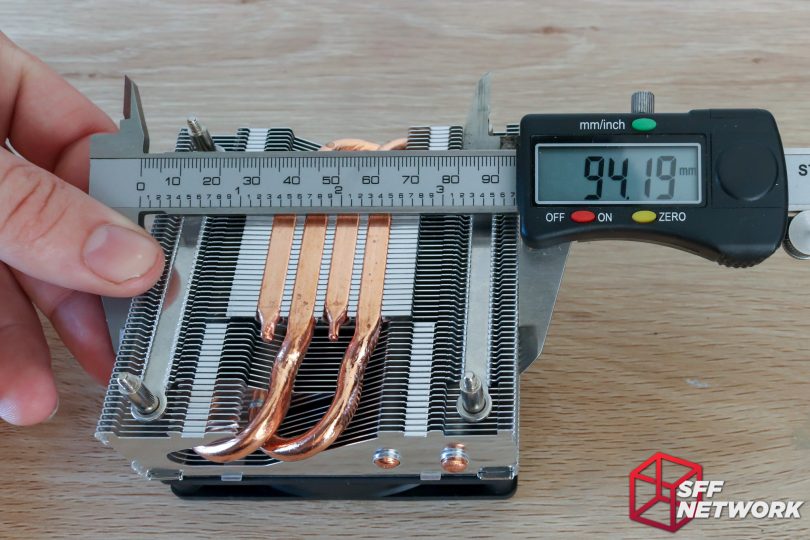 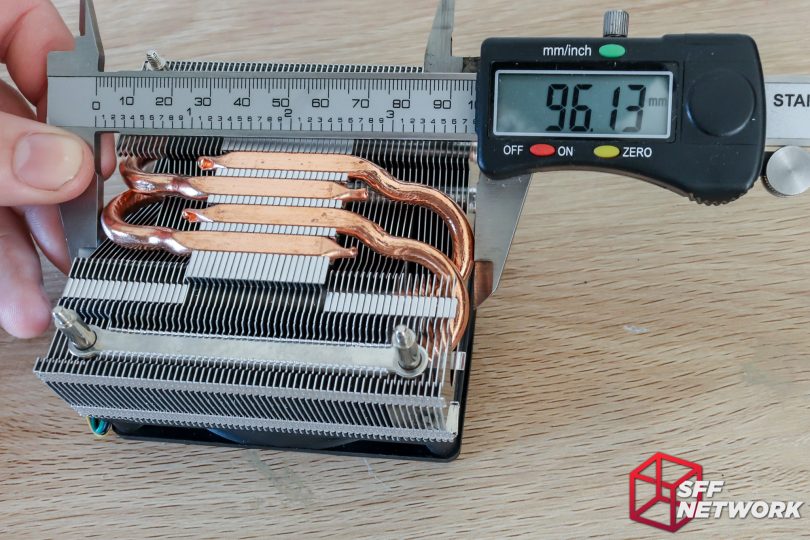 and 96.1mm in the other, the cooler isn’t exactly square, but close enough for most use cases. 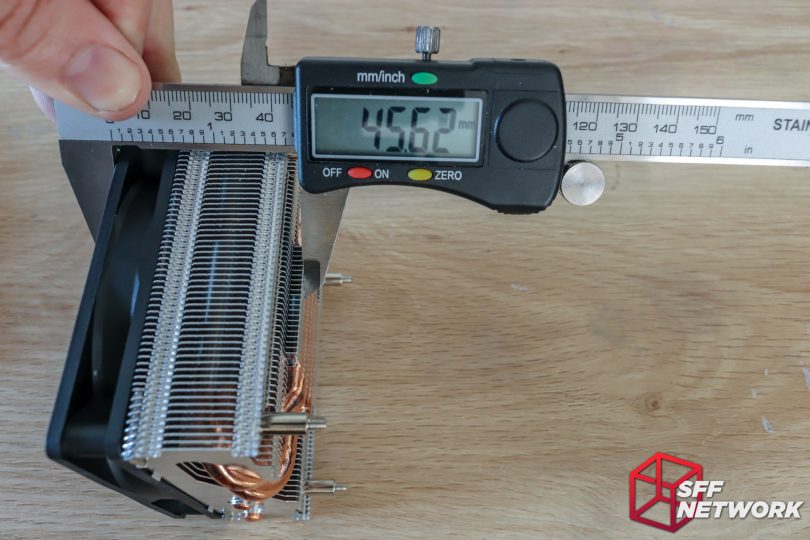 Not quite 47mm thick – my sample measured in at 45.6mm from the contact area to the top of the fan. 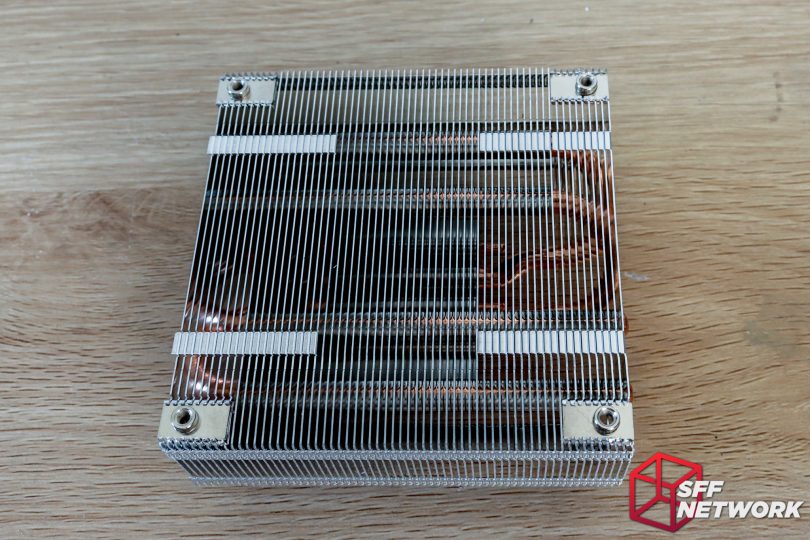 Without the fan, we can see the fan mounting screws – embedded into the fin stack. A very clear fin layout, with not much area used to attach the fins to one another. 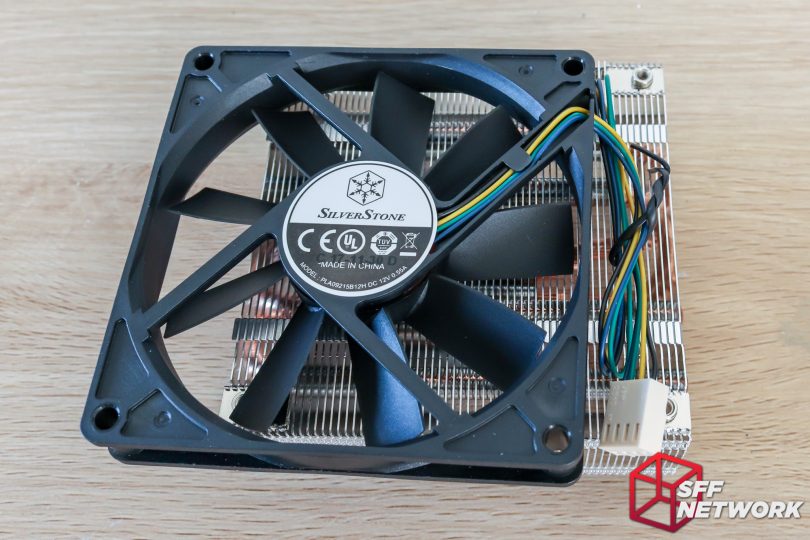 The fan itself is rated at 12V, 0.55 amps, meaning that we have a 6.6 watt fan. The model number – PLA09215B012H – appears to be a Power Logic part number, but with a quick Google search, numerous fans use that model number. Confusing. However, with some more digging, a datasheet can be found! SilverStone – I know you can design great fans. 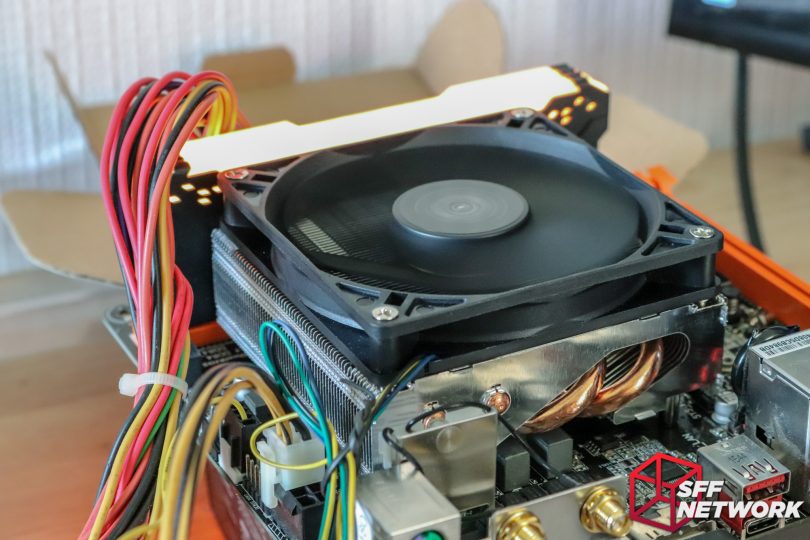 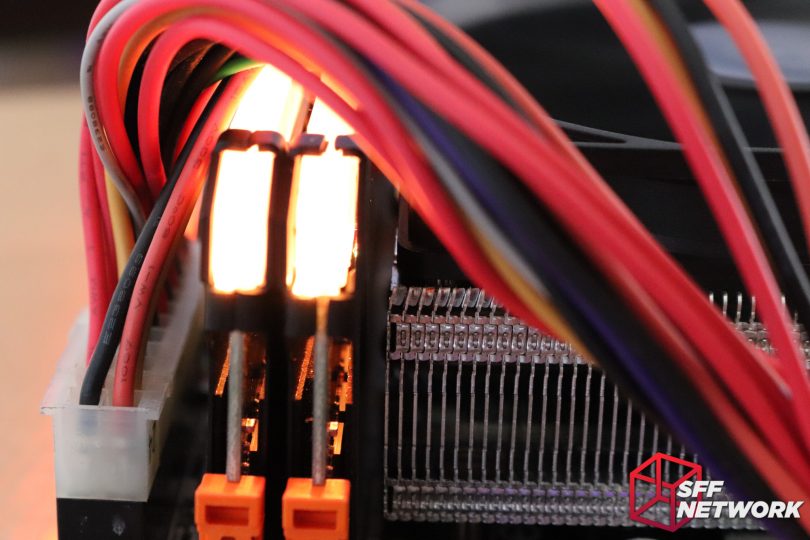 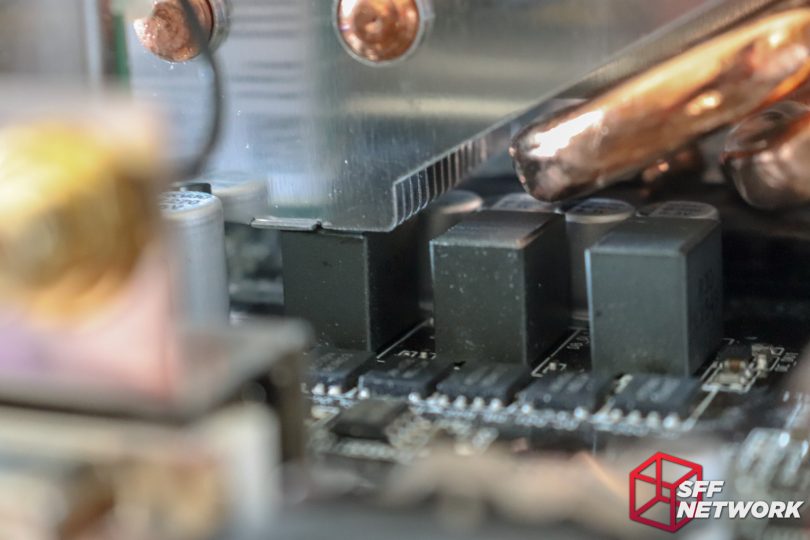 Even here – whilst this looks like the cooler is sitting on this choke, a sheet of paper can be (barely) slid between the cooler and the choke – that’s a proper SFFn approved fit!

A cursory note; I tested the below with a 54w, not a 95w processor! Take the below results and conclusion at face value.

Throwing the cooler onto our test bed (outlined below), I loaded up Prime95’s blend test, a brutal test for even the weakest of processors. Whilst I only tested with a Pentium, the results should speak for themselves.

Each test was performed three times, with the removal, cleaning and re-application of thermal paste between each test run. The average results are recorded as a delta temperature – that is, the difference between ambient air temperature and the reported highest core temperature in HWMonitor.

Disappointed in the AR11’s showing, I threw the Noctua NF-A9x14 fan from the L9i on to the Argon AR11 to see what would happen – the cooler’s stock fan is very different in style versus the Noctua offering. Wow, did this make a difference. With a result of 25c delta over ambient, at max fan speed – and much quieter than the stock fan. With PWM mode enabled, the fan settled down to a very quiet 1550 RPM and 29c delta – the best overall setup in the test from a noise vs performance standpoint.

Ultimately, belying the overall solid design of the cooler, the overall performance was just under to the level I expect of a cooler in this price range and form factor.

Why? The fan just isn’t the design this cooler truly needs. With large blade gaps, the fan lacks a lot of what dense fin stacks need – high static pressure. A simple fan swap reduced noise and improved performance in one fell swoop. The part that bugs me here is – SilverStone has a fan in their repertoire that looks to offer the performance needed – it’s attached to the AR05/06 coolers!

I just can’t recommend the SilverStone AR11. For the same price, you can pick up a Noctua NH-L9i, which is quieter, albeit slightly warmer, but 10mm shorter. Not to mention a more robust accessory kit, the value proposition just isn’t there. Even CRYORIG’s C7 (aluminium) offers what should be comparable performance for $5 less, whilst supporting both AMD and Intel sockets.

This review sample was provided by SilverStone.

Hey folks, some updates from @SilverStone – points that I missed and feel should be included;

-I tested on a 54W CPU, (the highest wattage Intel chip I have to hand. Damn my i7-7700T’s power friendliness!), so the results at higher wattages should be more pronounced
-The NH-L9i will struggle a bit with 95W CPUs, unlike the AR11 which is rated for that wattage bracket
-The C7 Cu is a heavier and more expensive cooler!

Also to note;
-Silverstone tested with the AR06’s fan, and found the airflow insufficient at the 95W TDP level