Noctua’s fans have been produced in the same shades of Coffee and Cream since the company launched in 2005, much to the chagrin of many within the PC enthusiast community. While some saw the colours as a distinct brand, and thus a signature fitting for a premium product, many saw the colours as not particularly eye-pleasing, if not generally incompatible with the colours used in other components. Still, Noctua held to its trademark livery for quite some time, showing that they were focused more on performance than aesthetics.

Recently, though, Noctua has launched two new styles of fan: the Industrial PPC and Redux product lines. With either black-and-brown, or two-tone grey colours, the option to have premium fans in a colour that matches your system has now been opened to the masses – or, at least, to those who’d rather not paint their pricey cooling devices.

There are some caveats in the release of these products, however, as you will see below.

The Redux product line is a… creative… way for Noctua to embrace the demands of the market: fans that actually match the colour scheme of a build. The sneaky part of this is that these fans are actually a previous generation design from Noctua – their current generation Copper and Cream coloured fans replaced these designs a year or two ago, in fact. This has the advantage of allowing Noctua to avoid creating expensive extra moulds in order to add the grey fans to their production run (they can just use the previous generation moulds). This, in turn, means that the price point can be adjusted accordingly.

Of course, with the previous generation designs come lesser performance and/or features compared to the freshest stuff. One notable feature absence, for example is the silicone rubber padded corners found on most current Noctua fans. In fact, these fans don’t come with any isolation at all – the only mounting included in the box are 4 metal screws. 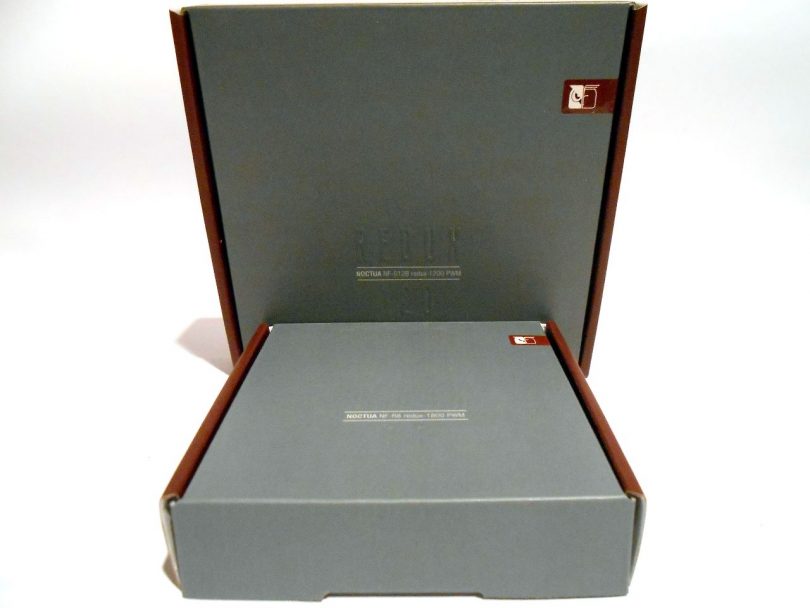 As we look at the packaging, the boxes for the Redux fans embrace simplicity at it’s finest. A brown and grey colour choice appears to link both the traditional Noctua colours and the new fans, in an understated but elegant manner. 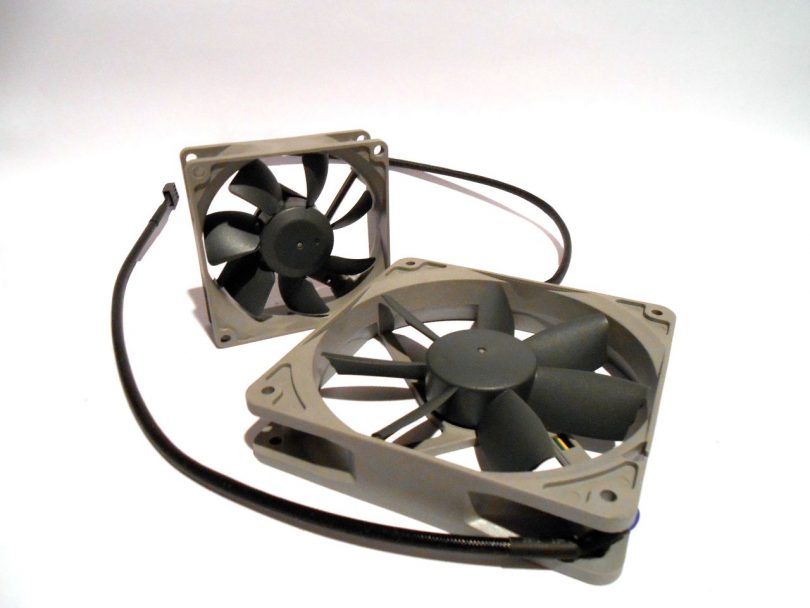 Pulling the products out of the boxes, the fans themselves are distinctive in their two-tone grey-on-grey look. A noticeably older design is visible, from the skinnier, more angled blades, to the lack of anti-vibration features. That said, the two tone colour scheme really is appealing, and would fit builds from subtle black and grey rigs, to a full blown industrial-styled scratch build.

The sleeved cable is sufficiently long for even full sized systems, so cable routing in our SFF systems was a breeze. 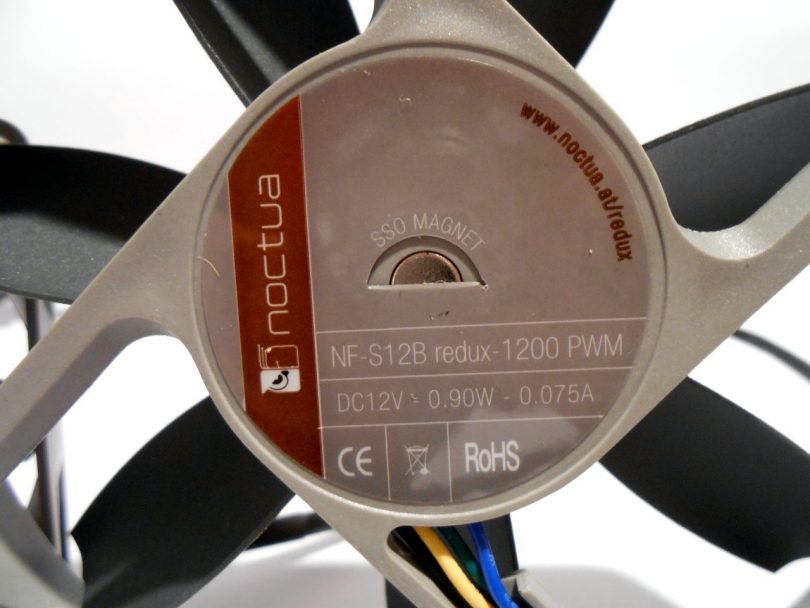 The NF-S12B 120mm fan is specifically designed for low-impedance case cooling, and is not designed for high static pressure applications, such as radiators or heatsinks. As you can see, the usual metal motor hub plate is not present on the Redux line, replaced with a sticker (like most other fans). This does reduce the premium feel of the product, but the Redux line is targeted at a more affordable price bracket than the regular Noctua products, so this is expected. 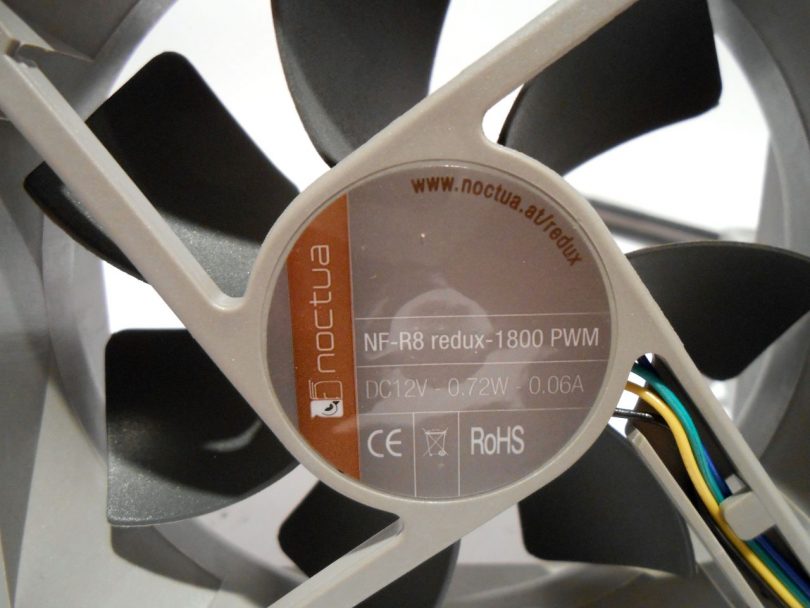 Finally, the NF-R8 Redux is more of an all-round fan design, not specifically for low or high impedance use cases. Once again, a sticker replaces the metal motor hub plate.

The Industrial PPC product line has a much more rugged feel to it. Various options are available, be it 12 or 24 volt power, 3 or 4 pin control, and 120 or 140mm sizes. Also available is the option for IP67. What does this mean? The motor and PCB of the fan are completely cast in a heat conductive resin, that combines protection and effective motor heat dissipation. In fact, this fan is not only fully dust-tight but also completely waterproof up to 1m depth immersion. This brings a whole new meaning to the term ‘water cooled’!

Needless to say, Noctua seems to be targeting industrial and manufacturing use cases where the environment is a bit more turbulent than most people’s households. That said, some of that durability may very well translate into performance or reliability gains even in the context of a ho-hum desktop system. 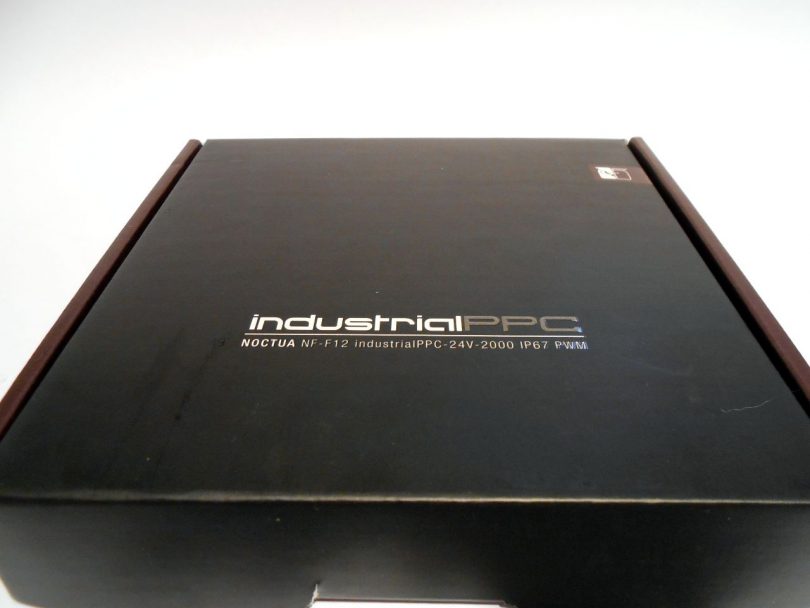 The box is similar to the Redux line, understated. Instead of the grey for the redux, black is used for the Industrial PPC fans. This hints at one of the main features of this product, from a PC enthusiast’s perspective. 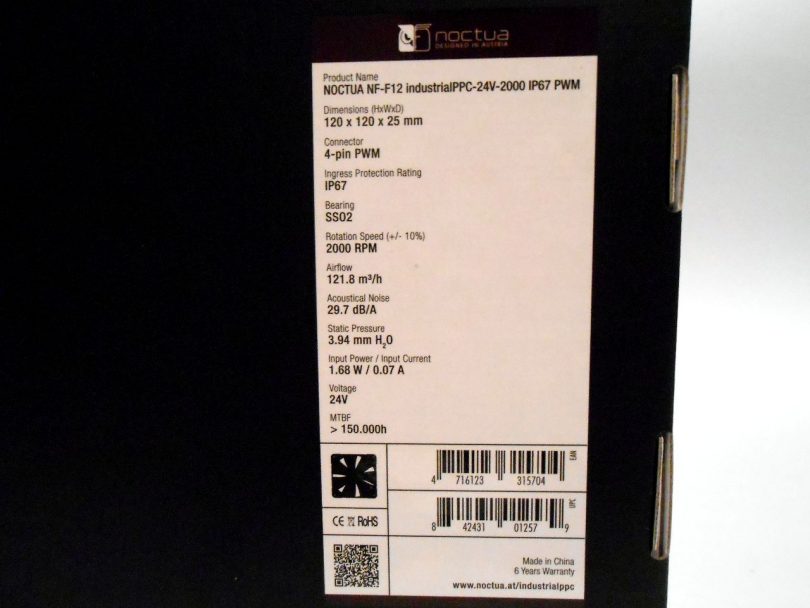 On the back of the box is a handy feature table, in this case showing that the sample we have is a 24v model. This does not exclude the fan from PC use – the fan will just run at a reduced speed on 12v, enabling high reliability, quiet, cooling. 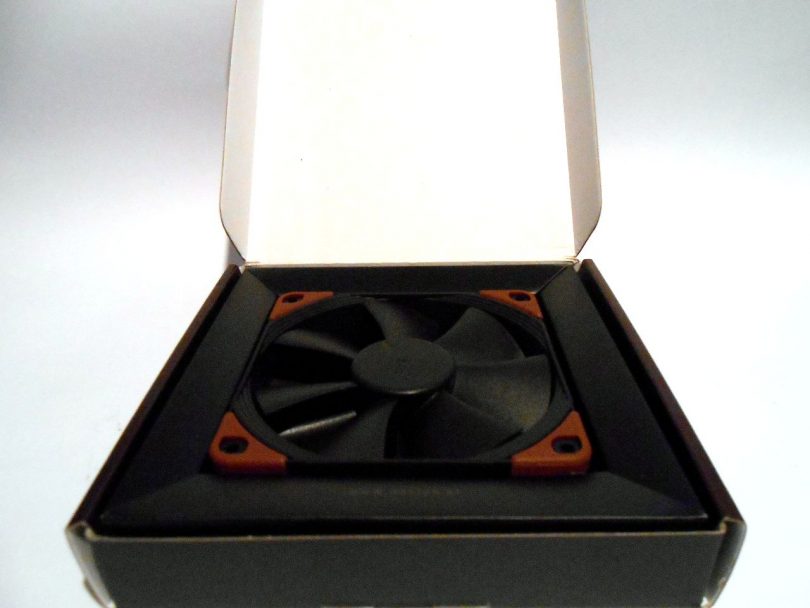 The fan! Yes, that is indeed a black Noctua fan that you see. While the corners may be brown, that can easily be changed using Noctua’s Chromax line of products.

The box itself is simple in its construction, with the only included accessory being 4 metal mounting screws. 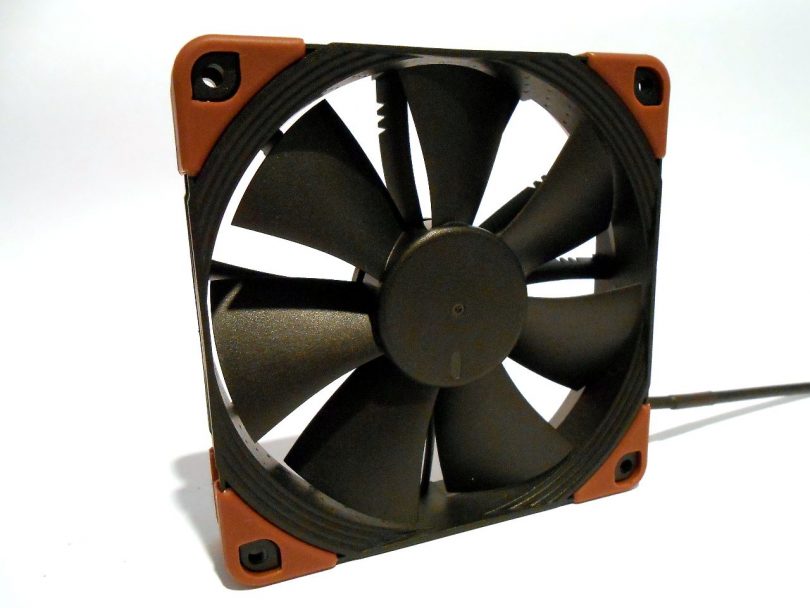 The Industrial PPC fan in all it’s glory. The overall design is based on the standard Noctua NF-F12 fan, but cast in black fibre reinforced plastic for improved durability and longevity. 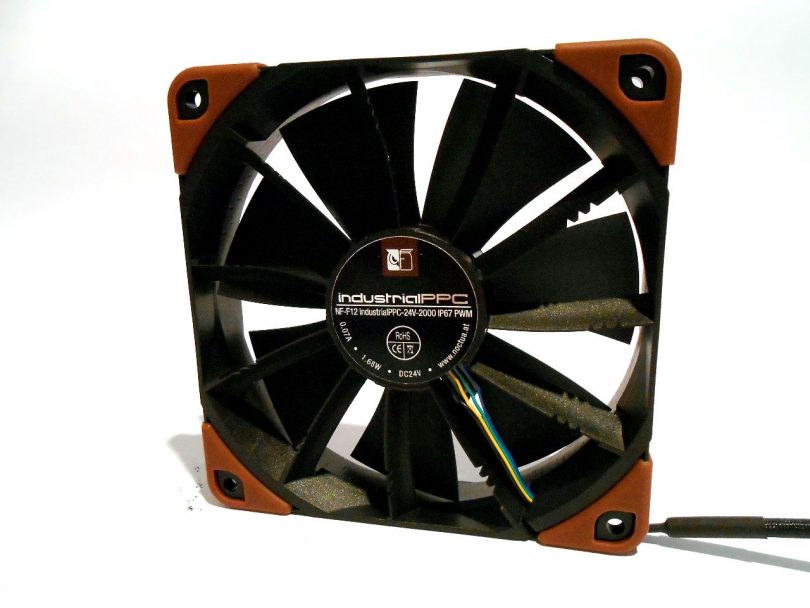 And the rear, showing the air guides that are also found on the NF-F12 fan. So far, this just looks like a recoloured standard Noctua fan, but all the secrets are to be found in the motor hub. 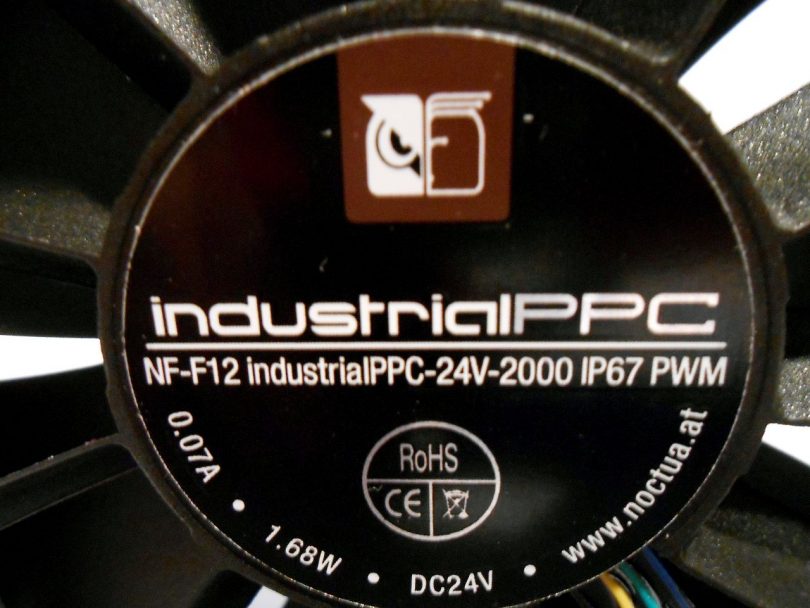 Ahh, the fan hub, where all the secrets lie. A metal fan hub plate is found here, as well as hints of resin on the ends of the PWM wires. This hub is internally completely encapsulated in resin, protecting the electronics from water and dust. This fan can resist water up to 1 metre in depth, and resist all dust ingress, leading to a longer lifespan, especially in harsh environments.

The Noctua Redux and IndustrialPPC ranges add a much needed customisation to their range. Of course, the Redux fans are of an older design, and the performance may suffer as a result. However, the greys of the Redux and the black of the IndustrialPPC range enables system builders to more thoroughly theme their build and thus the sacrifice in performance or price may be considered worth it.

The IndustrialPPC range also adds a ruggedness that some systems will require – water and dust resistance will enable significantly longer lifetimes with a higher MTBF.

The usual Noctua product quality is still to be found here, and these fans are well worth considering for your system. Though the IndustrialPPC (and, let’s face it, the standard Noctua product line) remain quite expensive for the functionality they provide, the Redux line brings excellent acoustics and performance to more accessible price points. And as for the IndustrialPPC fans, we get the feeling that many enthusiasts will happily look over the price point in the quest for the best.

The NF-S12B Redux 120mm fan is currently selling for around US$16 on Amazon.com

The NF-R8 Redux 80mm fan is currently selling for around US$14 on Amazon.com

The NF-F12 Industrial PPC 24v 120mm fan is currently selling for around US$30 on Amazon.com