Continuing our current trend of CPU cooler reviews, today we are looking at the Prolimatech Samuel 17! This particular CPU cooler has been around for years, but it’s unavailability in certain markets (I have never seen it listed for sale in New Zealand!) has lent it a certain ‘holy grail’ status in the SFF cooling world – which is a bit of a shame, since the 6 heatpipes and dense fins that compose its design enable great cooling for the size, at least on paper.

Speaking of ‘holy grail’, though… what’s with the name? From Prolimatech:

In the Old Testament of 1 Samuel, Chapter 17 tells a story of an ordinary man named David whom nobody believed in. That did not matter to him because David had something to put his trust and faith in. From that he would get his strength to battle the nine-foot-tall giant, Goliath. In the end, against all odds, David did prove that size does not matter when he defeated Goliath.”

A rather fitting name, considering our focus here at SmallFormFactor.net – small but mighty systems! But does this cooler live up to its reference, and slay the giants? Only testing will tell! 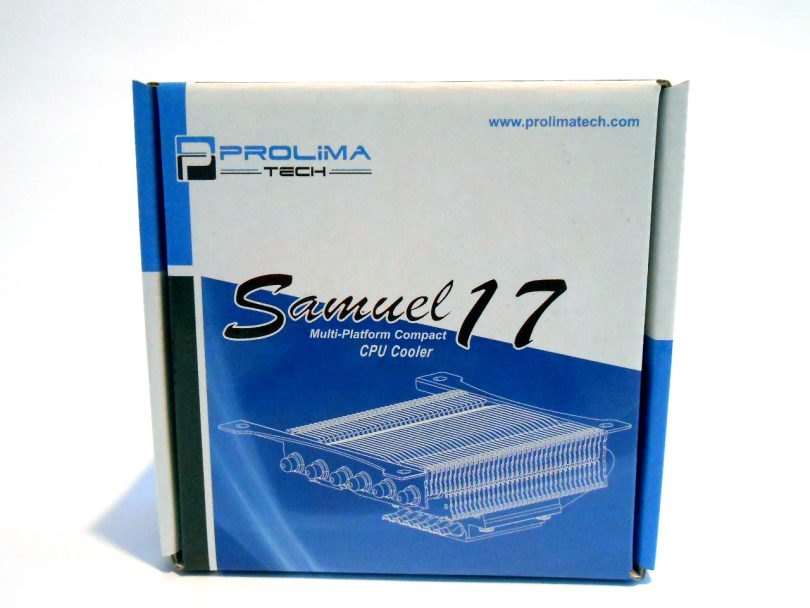 We start, as always, with the packaging, and see that the box for the Samuel 17 is composed of glossy cardboard, which is graced with a simple 3 tone (black, blue and white) color scheme. The box itself is sufficient sturdy and well packed, with closed cell foam on the interior protecting the cooler and accessories. Only the roughest of shippers should prove to be problematic. 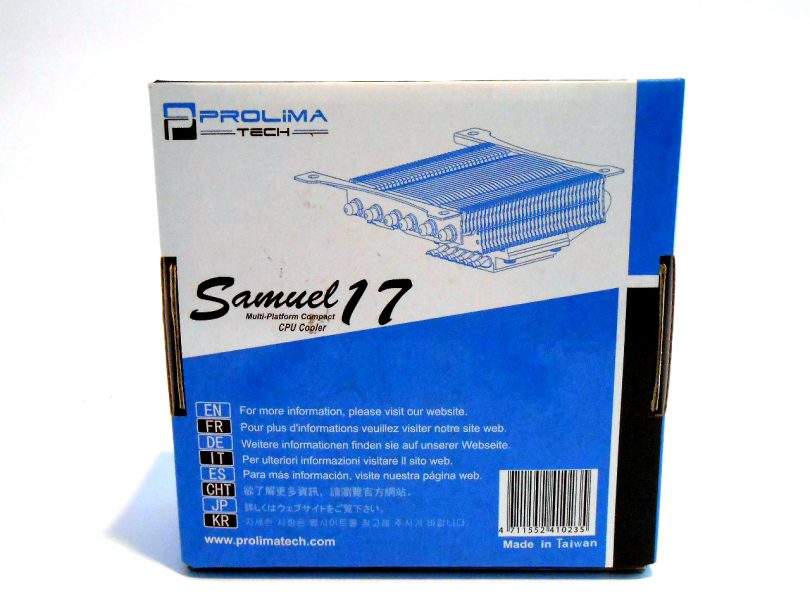 The rear of the box is similar, but directs you to Prolimatech’s website for further information. 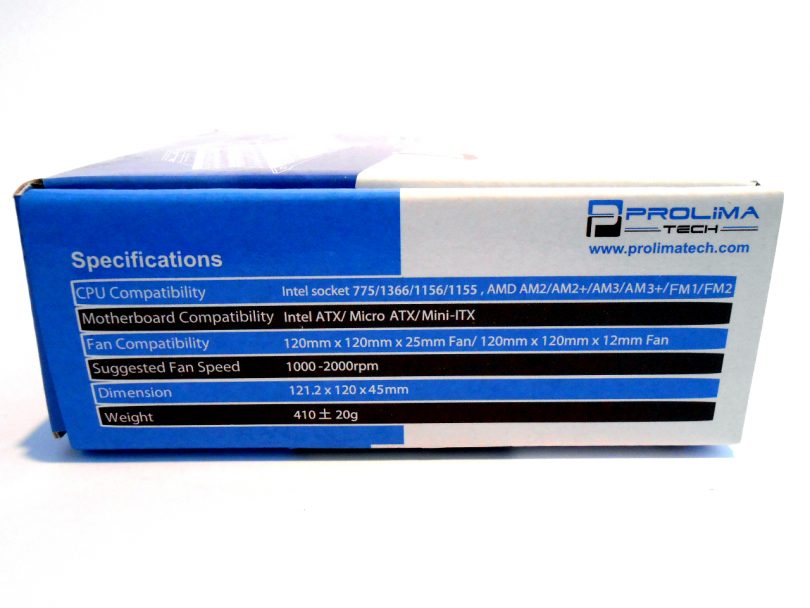 On the right side of the box, we see the cooler’s specs, which we have mirrored above in the specifications list. 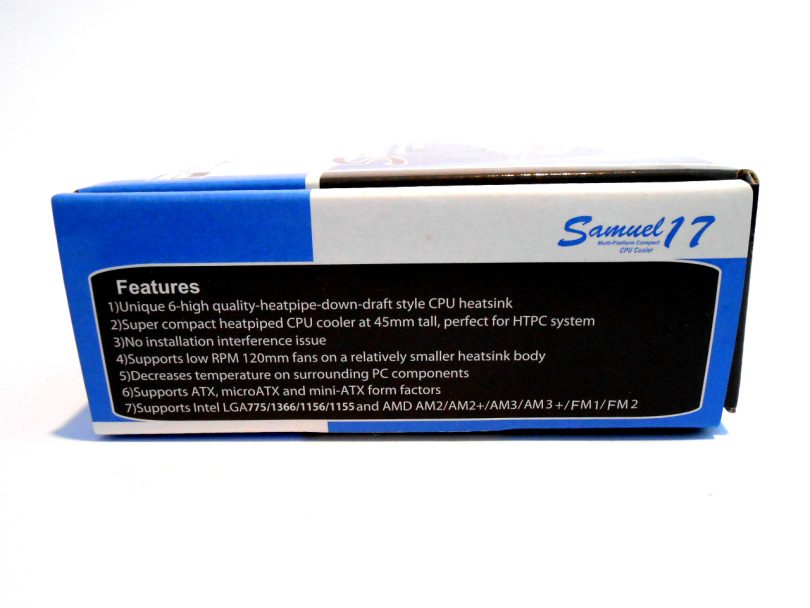 Finally, the left side of the box shows the features of the cooler. For the Samuel 17, this mostly relates to performance and compatibility concerns. 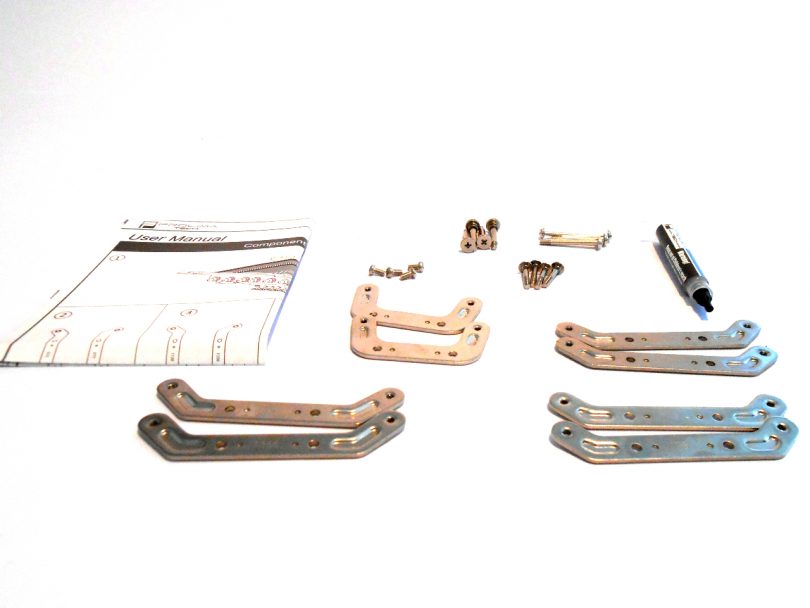 Cracking open the box, the accessory kit inside is well stocked, and includes quite a few socket mounting brackets. Note, however, that this cooler does not come with an included fan – BYOF is in full effect here, which some may be upset with, but many others will likely be seeking out.

Clockwise from the top left, we have: 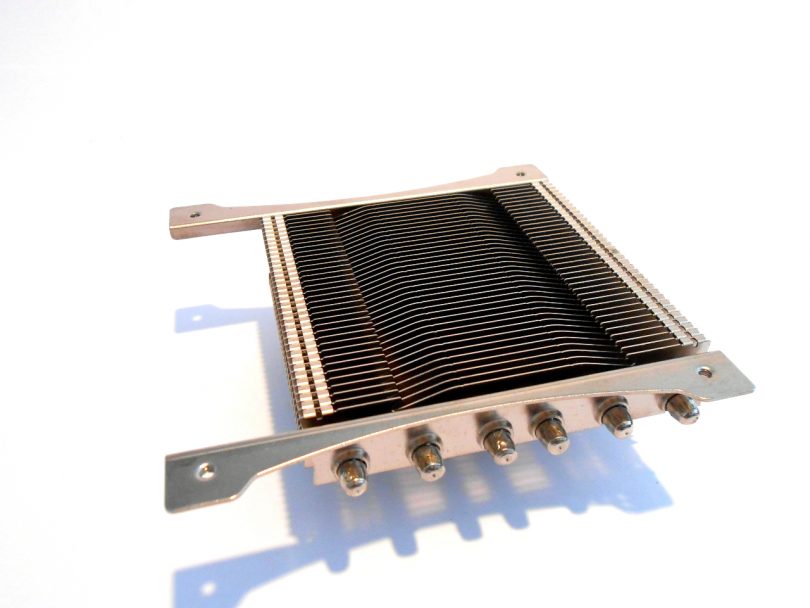 But enough of the accessories, let’s investigate the cooler itself.

As you can see, the cooler embraces a top-down design, but what makes the Samuel 17 rather unique is the offset fan mounting, which enables direct cooling airflow to RAM, chipsets, and CPU VRMs, depending on how you install the cooler. The fan mounting holes are threaded to accept the included screws, supporting 15mm or 25mm thick 120mm fans. 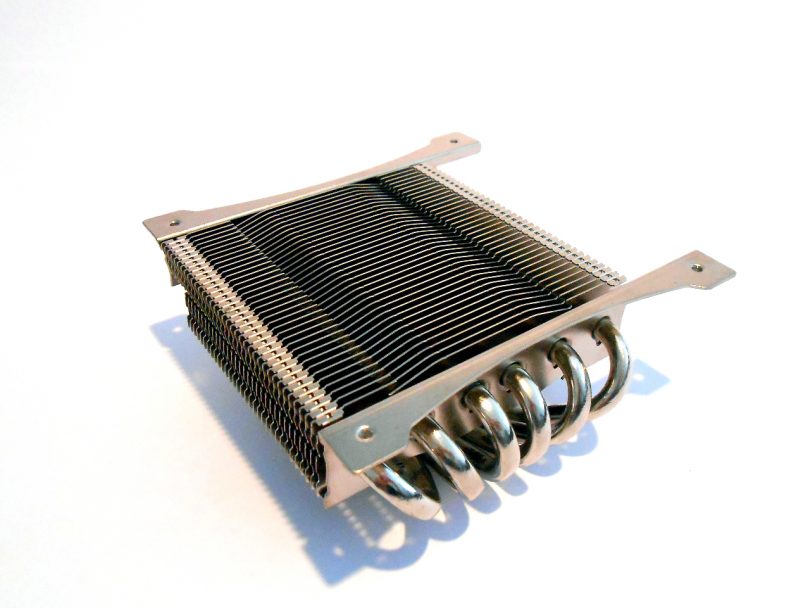 The heatpipes measure 6mm in diameter, and there are a generous total 6 of them. This should provide excellent heat transfer from the base to the aluminium heatsink fins, especially for the cooler’s size. 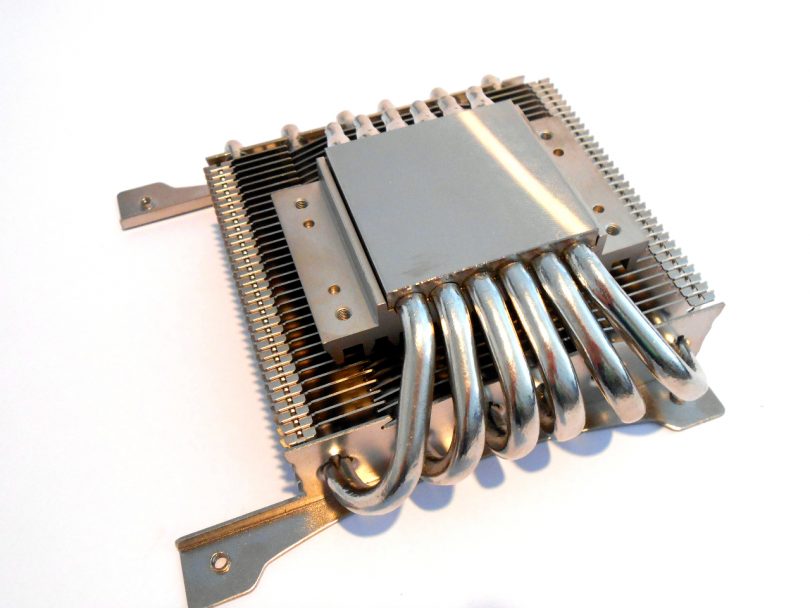 Looking at the base of the cooler, the offset nature of the design becomes more evident. The mounting brackets are mounted to the base using 4 small screws, plus 4 small lugs to assist in locating the brackets in the correct location. The base of the cooler is well machined, with only minor machining marks evident. If there was ever an “industrial-style” CPU cooler, this is it. 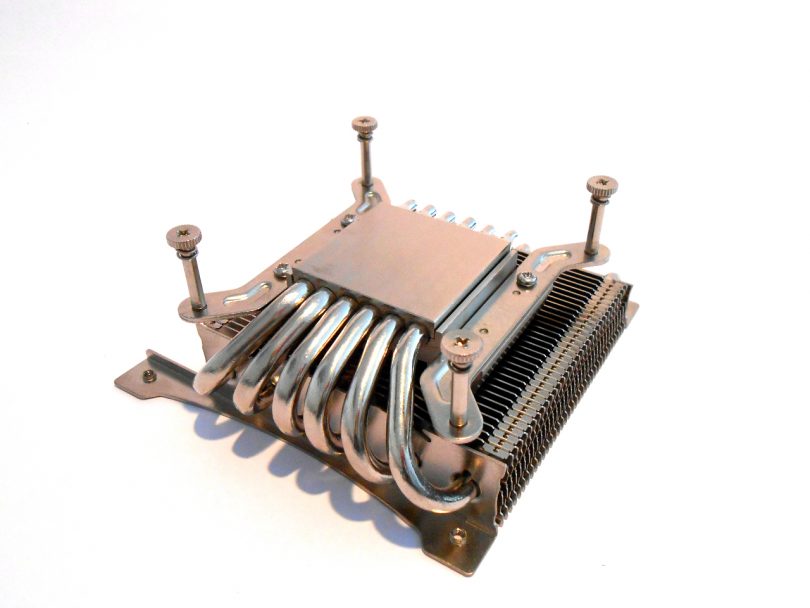 The cooler with the Intel LGA115x brackets mounting. Thanks to the design and profile of the cooler, it can be mounted in any of the 4 directions, enabling you to choose what the offset fan portion is cooling – or to ensure RAM clearance. 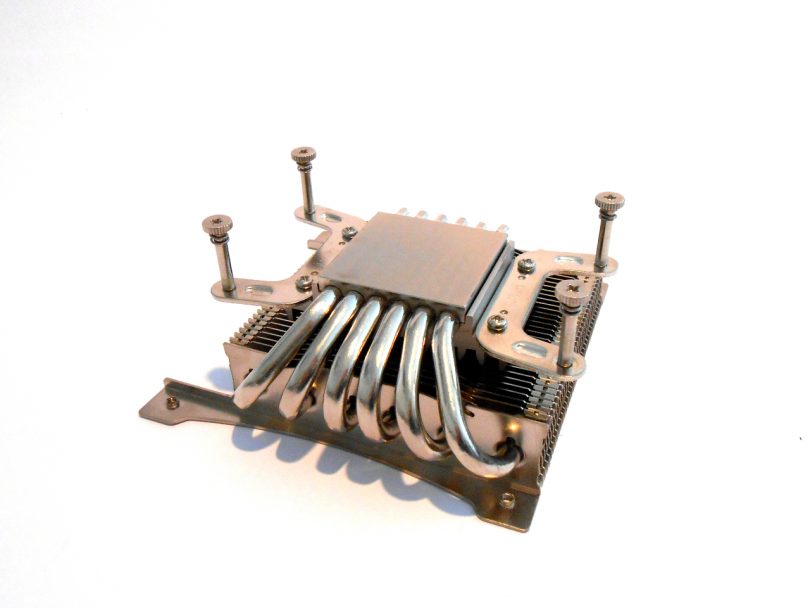 AMD mounting is somewhat flawed with this bracket design, however – the cooler can only be mounted in one of two layouts, as you will see further below. 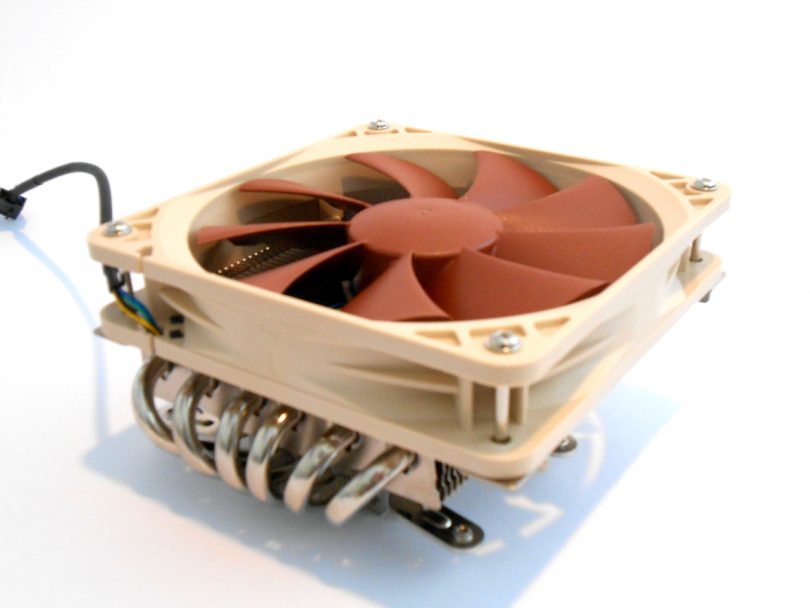 Four screws are included for mounting standard 25mm thick fans, as shown with this Noctua NF-P12 here. The screws are shouldered, preventing over-tightening. 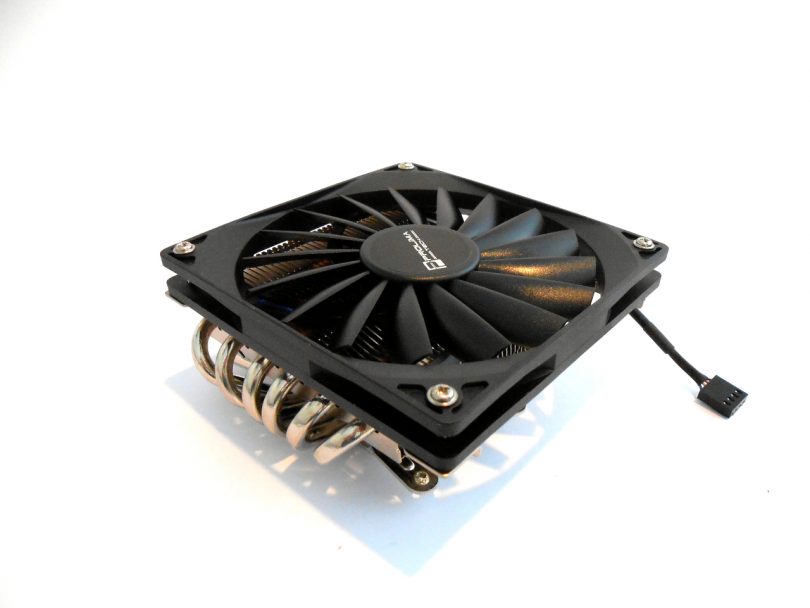 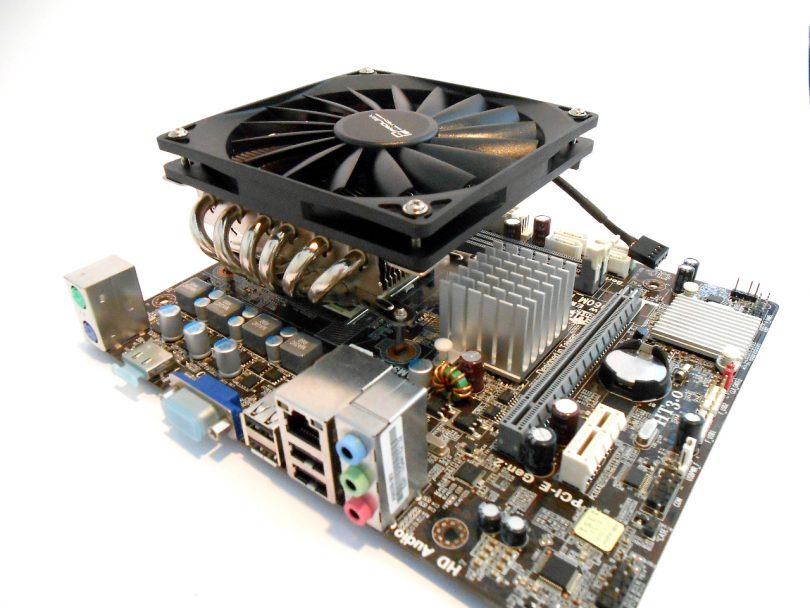 Mounting the cooler to the board was simple, but doing so does require either removing the board from the case, or having a CPU cutout in the motherboard tray, since the mounting screws are installed from the bottom. The fan overhang here is over the chipset, which is an ideal layout for hotter running chips. 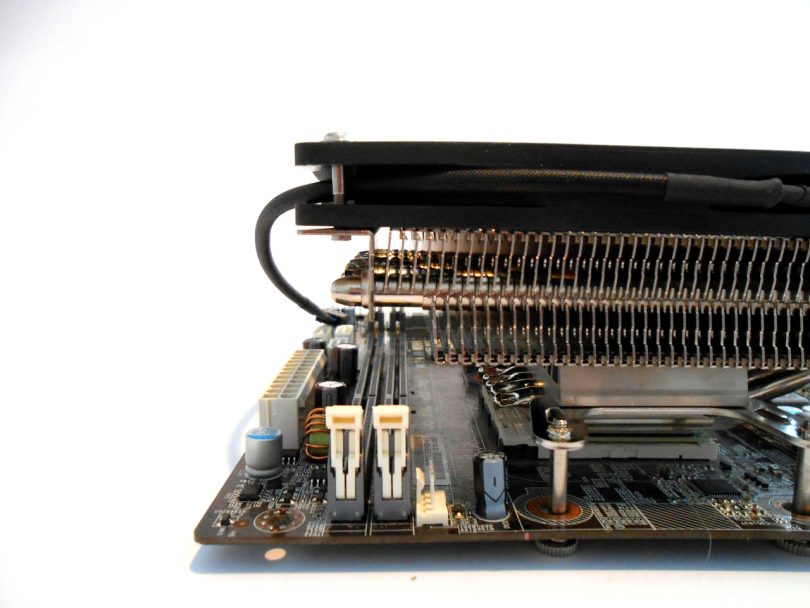 That said, in this orientation, you are limited to standard height RAM on many boards. Additionally, one thing I did notice when mounting this cooler was that the screws put a little too much pressure on the board, forcing it to flex more than I was comfortable with. Backing the screws out a couple of threads solved this though, relieving most of the excess pressure. As always, be careful when mounting coolers! 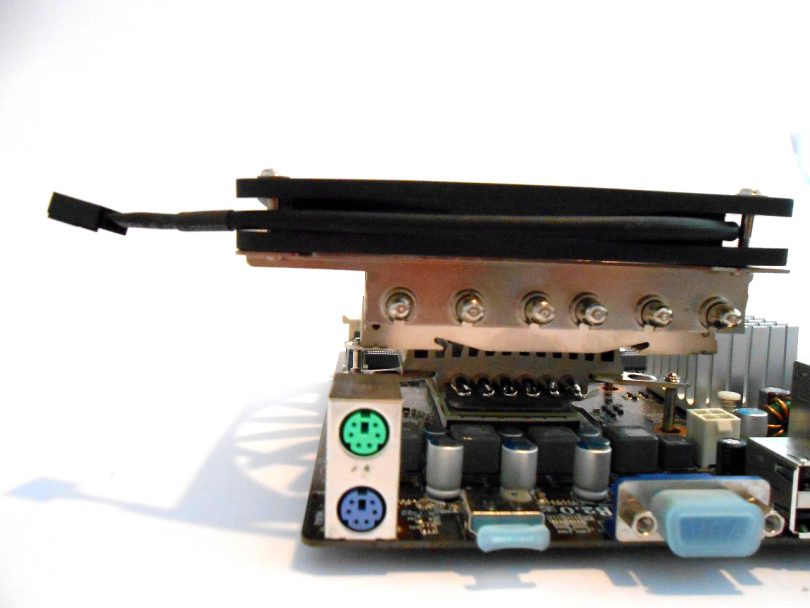 In the alternate. AMD layout, the fan overhang is over the top of the board, but… 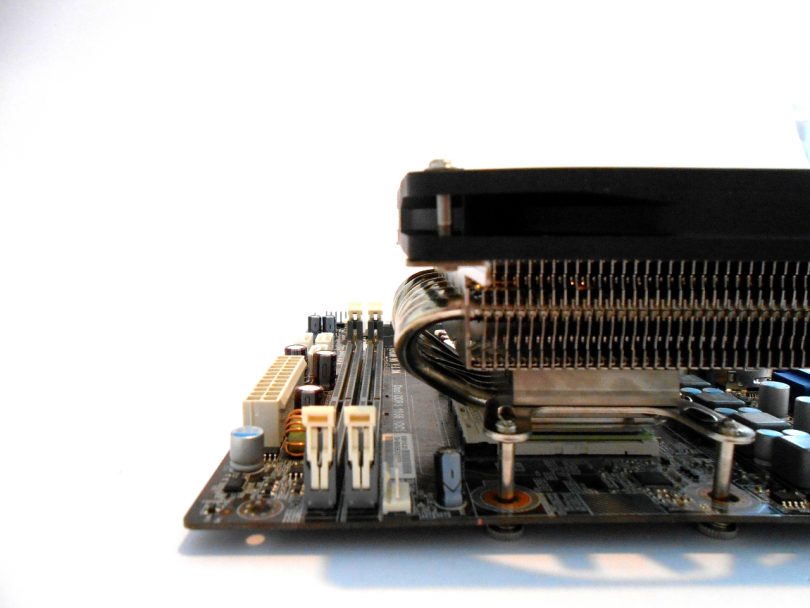 Unlimited RAM height is possible in this layout!

We should note that no conflicts with motherboard components were found with our test board, and Prolimatech has a list on the product’s webpage specifying compatible motherboards.

To test this cooler, we used the SmallFormFactor.net test bench and methodology, as detailed here. 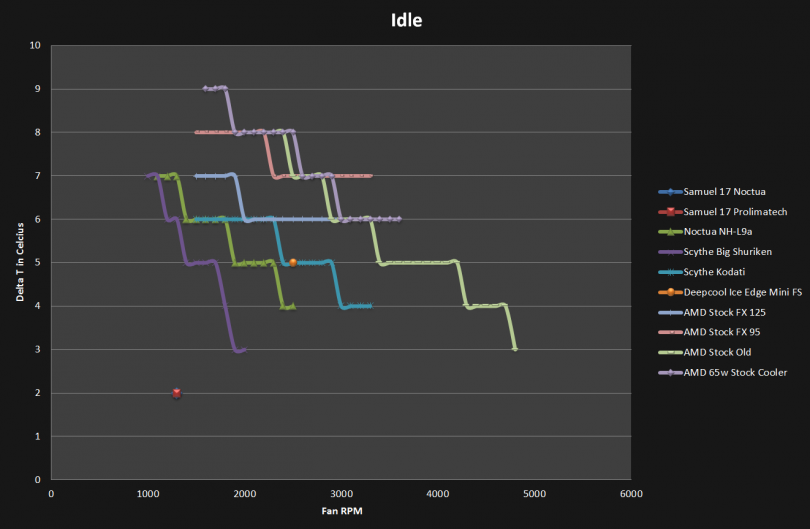 Unfortunately, our fan controller had issues controlling both the Prolimatech and Noctua fans we used to test this cooler. This meant a full fan speed benchmark – although this was, for both fans, still very quiet.

In the idle test, both fans on the Prolimatech Samuel 17 managed an impressive 2 degrees above ambient! 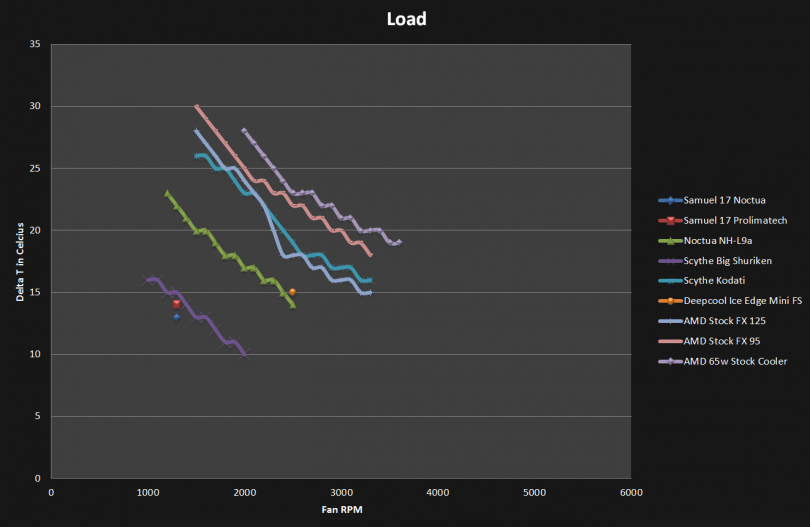 Under load, comparatively, the results were close as well, hitting a maximum 14 degrees above ambient with the Noctua NF-P12 PWM fan, and 13 degrees above ambient for the Prolimatech Vortex fan. When charted against the field of coolers we’ve tested thus far, this result means the Prolimatech Samuel 17 is one of the best performing low profile coolers we’ve benched to date!

Did David slay Goliath this time? Yes, indeed: The Samuel 17 is one of the best performing top-down coolers we’ve tested. Note that this does of course depend on the fan that you pick to cool the Samuel 17, as it does not come with one – but your choice of fan will likely be the bigger bottleneck from a noise/performance perspective than the heatsink itself, and that’s a strong endorsement of the Samuel 17.

When looking at the practicality of the cooler, we see durable packaging, plentiful accessories, and a simple and easy mounting system (if not one that can impart too much pressure on your motherboard if you aren’t careful).

Overall, for cases that can accommodate the Samuel 17 – and in particular, builds that will benefit from the options afforded by the offset design – is an excellent choice when paired with an equally-performant fan, slim or otherwise.

-Fan overhang allows great cooling for the components it sits over

-Hard to find in some areas

-Too much pressure when mounting screws are bottomed out

This cooler is currently available for around US$44.97 on Amazon.com