It’s about time I took a crack at a power supply review, since James has covered this market segment up to this point. FSP has been a manufacturer of SFX power supplies for some time now, with most of their units being supplied in OEM form to case manufacturers such as In-Win and the like. It is in this form that I first tested a FSP power supply, namely a 300W SFX unit that was bundled with an In-Win BK-series chassis. My experiences with this unit was (and continues to be) good, with reliable and quiet operation appearing to be a FSP hallmark across this and the other SFX, ATX, and TFX power supplies from them I have used in the past few years. Will the FSP Dagger 600W hold true to this reputation?

FSP Group has been around since 1993, and there’s a good chance that at least one system you’ve had in the past had a FSP-brand PSU, or at least a PSU that FSP has built for another brand (FSP really is a giant OEM provider). While they have been producing various small form factor power supplies in the past, this is the first time FSP has really targeted the enthusiast SFF market segment.

A disclaimer first before we get started: SFF Network does not currently possess the expertise or equipment to fully test the electrical performance of PC power supplies, and as such, this article should not serve as the sole data point in determining whether to purchase this product. We’ll be able to contextualize the utility and experience of using this unit with others in the market place, but we’d suggest having our own review supplement those by others who have the hardware and capability to do more thorough analysis of electrical performance, especially at higher wattages. 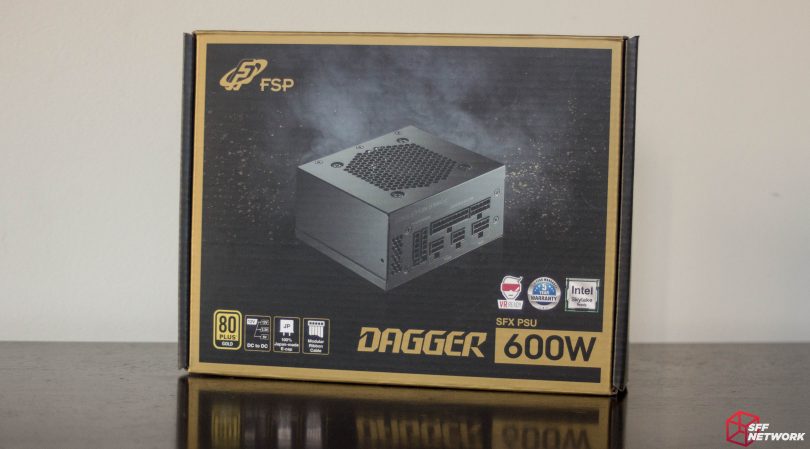 The FSP Dagger is packed in this full colour printed box, which seems sturdy enough to protect the unit and its accessories. 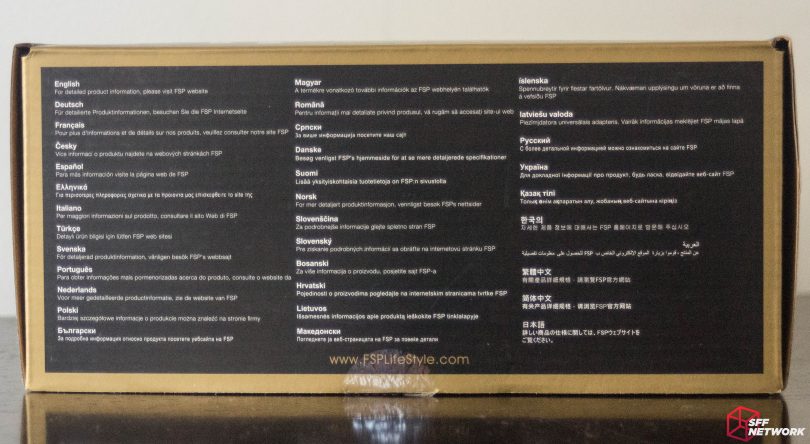 How many ways can you say ‘visit our website for more info?’. This many! 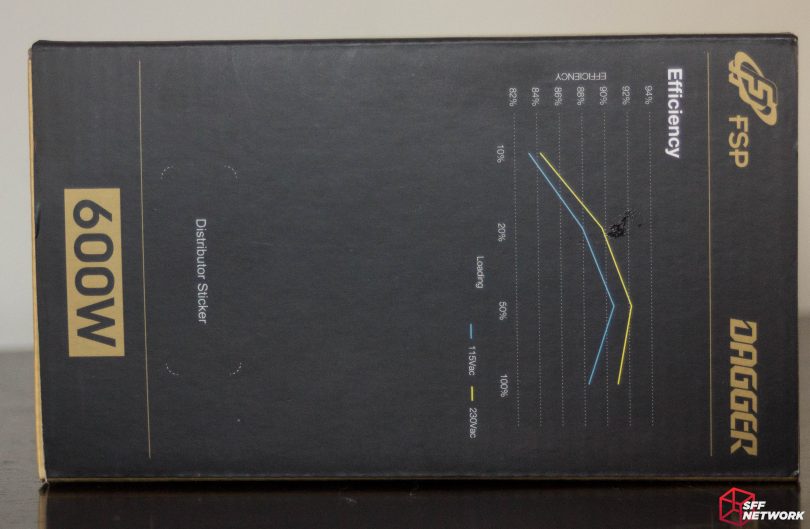 If you tilt your head to the right, you’ll be able to read this efficiency graph. As usual, 230V markets win over 115V markets in efficiency. That’s physics for you! 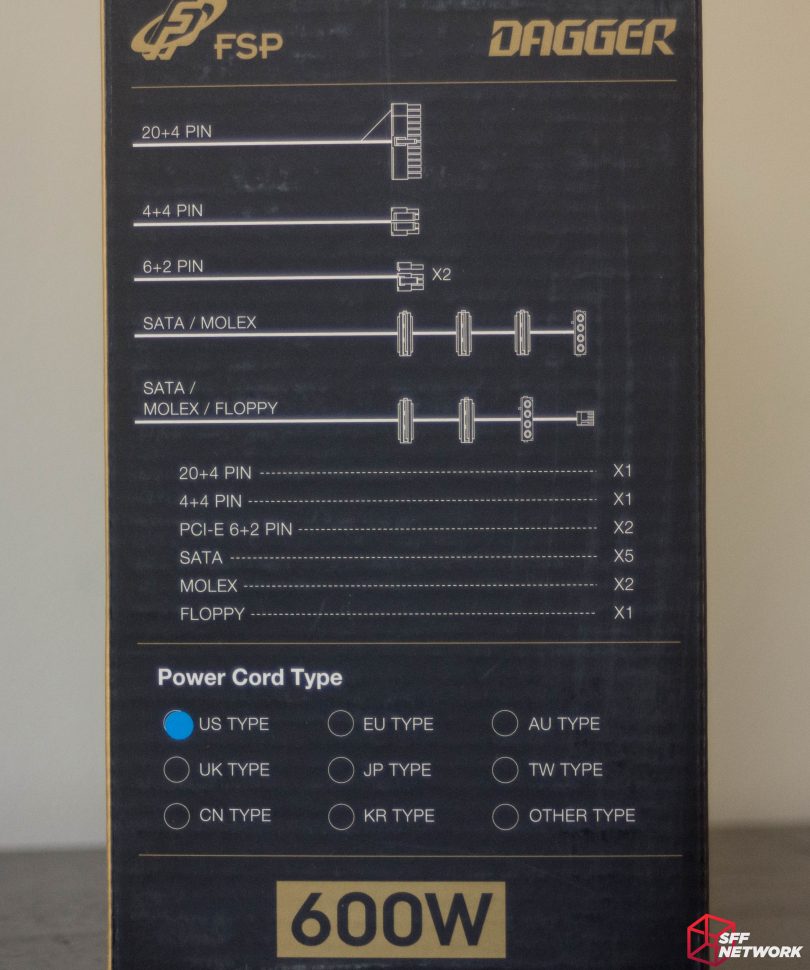 Cable descriptions and layouts condensed into diagram form. Ugh, floppy and “Molex”… ew! Also, we’ve converted the diagrams into more detailed ones with dimensions below. 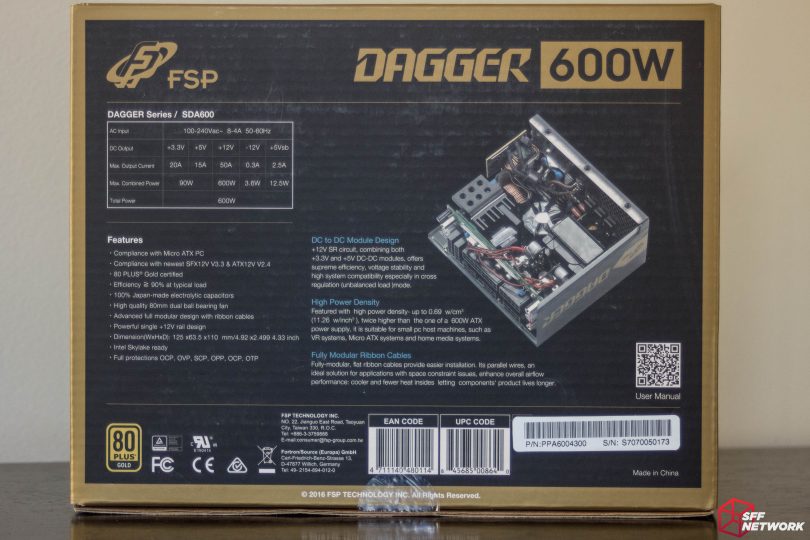 Specs, features, and marketing feature on the bottom of the box. 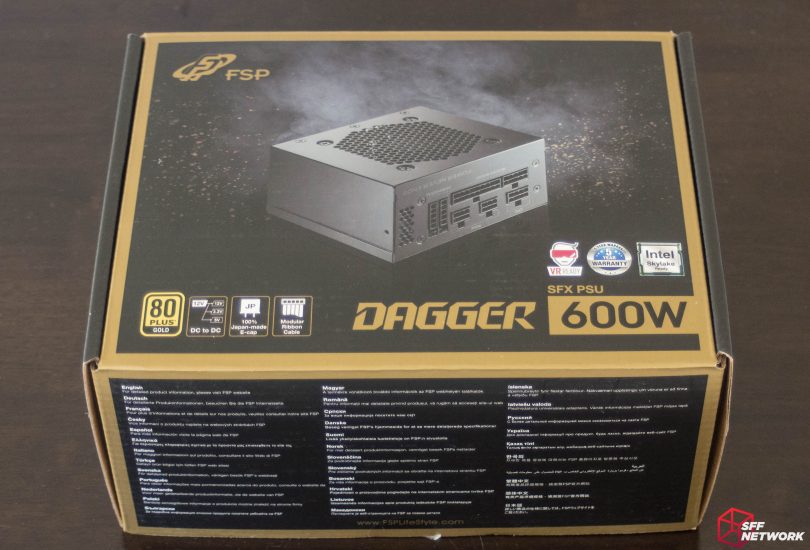 Shall we dive in? 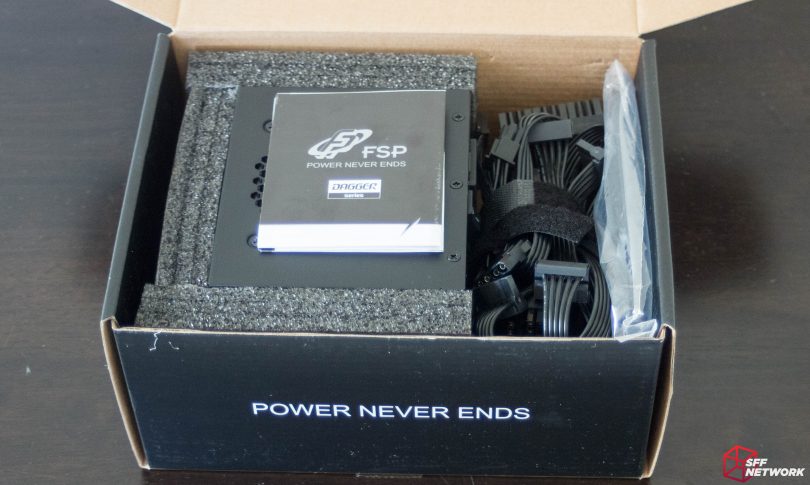 The PSU is well packed, surrounded with multi-layer foam on three sides, and on the fourth with the modular cables. 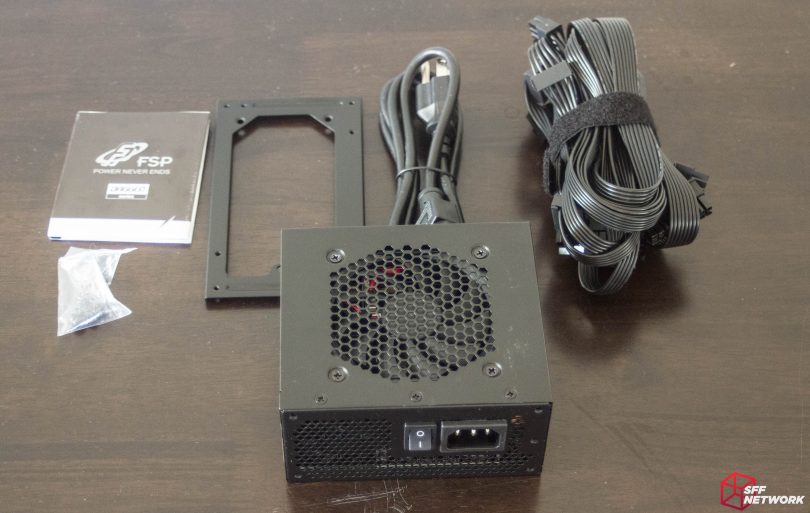 Accessories! Included is the power supply (one would hope!), and from the top left – a detailed manual, eight #6-32 screws, a SFX to ATX adapter bracket, which is slightly offset in its design, a power cord for your region, and the modular cables.

The Dagger 600W is a fully modular SFX power supply, yes, fully modular, including the ATX power cable. The cables are made from a high quality ribbon-styled cable, all in black, matching the all-black plug ends. Each different cable has a different plug to attach to; for example the disk power cable cannot plug into the PCIe power sockets, nor can any other cable, except for the intended one. This is fantastic – I’ve seen numerous modular power supplies in the past that used identical plugs, and using colour coding or keying to hope someone didn’t plug something into the wrong plug.

Through cable tracing and dark magic, here’s the pinout of the PSU end of the cables! 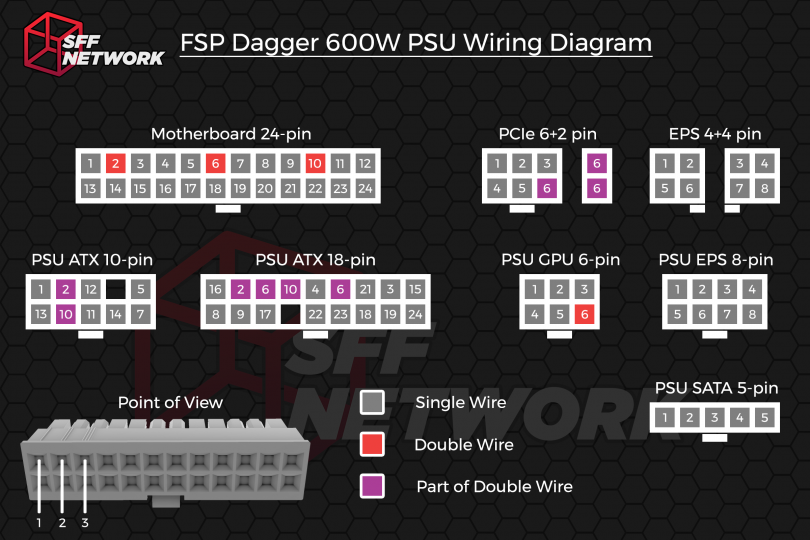 FSP has seen fit to add +5V sense and +12V sense, above and beyond the ATX specification. While this is great to see for monitoring, it does lead to the ATX cable being somewhat of a tangled mess. This is somewhat unavoidable unless you are very creative on the modular PCB – it’s just more noticeable with the flat, ribbon style cable that this PSU has.

Also included for your convenience is a set of measurements of the cables! Measurements exclude the connectors. 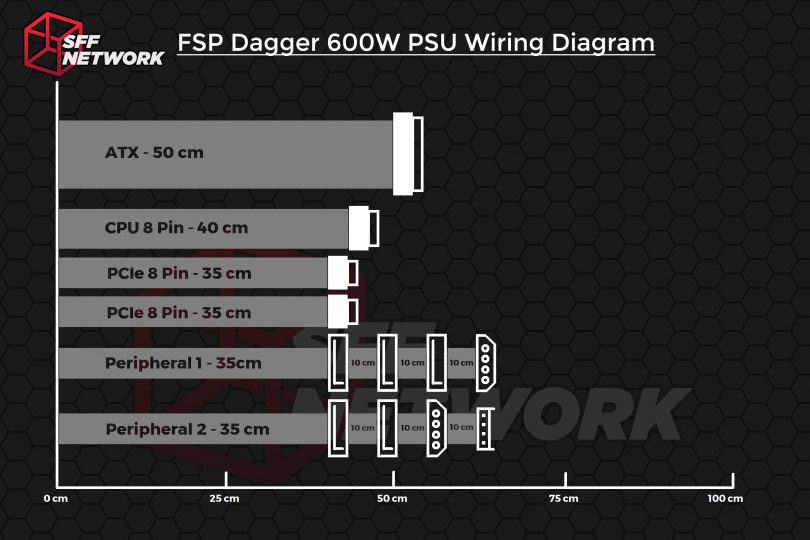 I am disappointed to see the inclusion of the nearly extinct Berg (floppy drive) connector on a cable, as well as the 4-pin peripheral (“Molex”) connector on both. Modern SFF systems have little use for “Molex” usually – and any use it (or Berg..) could be achieved with a SATA adapter.

The FSP Dagger 600w is resplendent in an mostly-black colour palette, which appears to be paint rather than a powder coat, as it does not extend to the insides of the chassis. The paint is of good quality, but may be too thin to stand up to repeated installs. 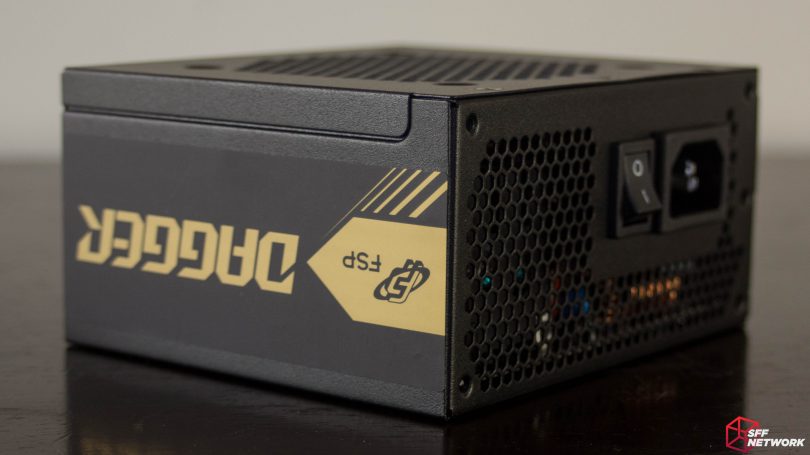 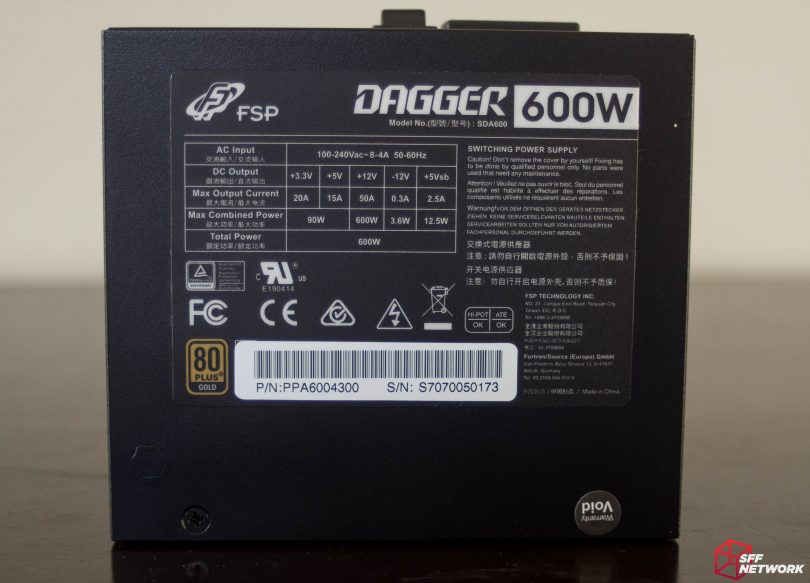 On two sides, the FSP Dagger branding is seen, which is a plastic/paper-based sticker. The shell of the PSU is made from what appears to be 0.7 mm SECC steel, which is par for the course. 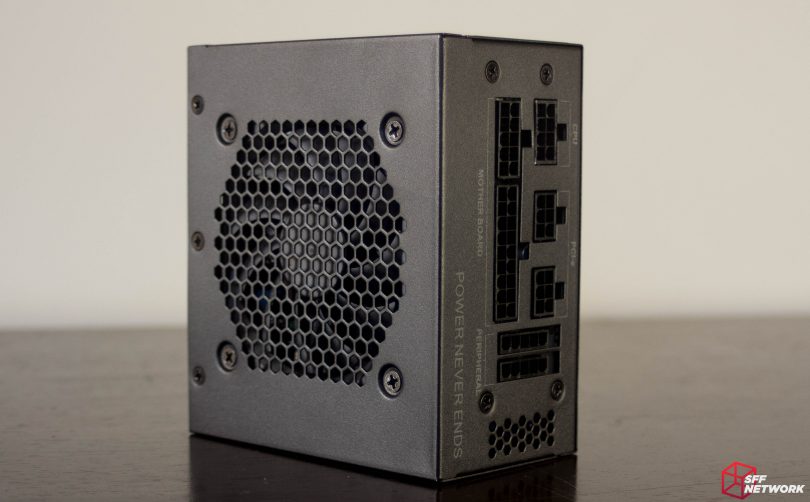 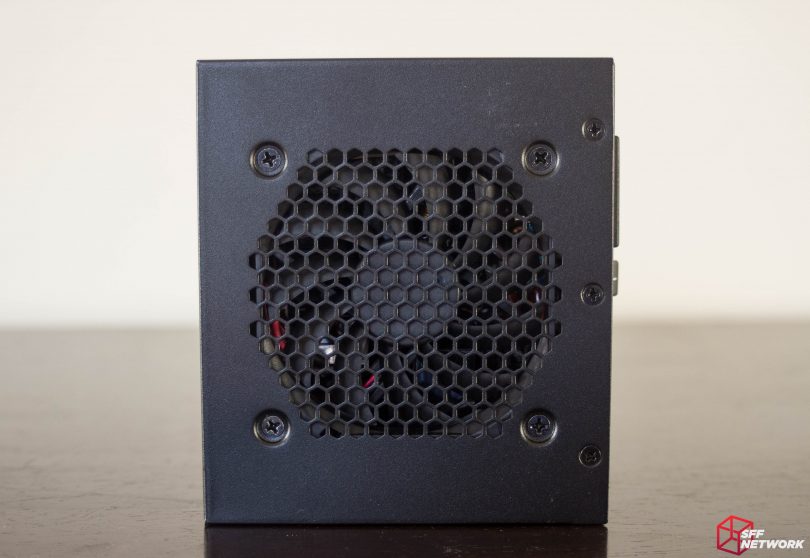 Giving the PSU room to breathe, a simple stamped hexagonal pattern is provided for the 80mm fan. 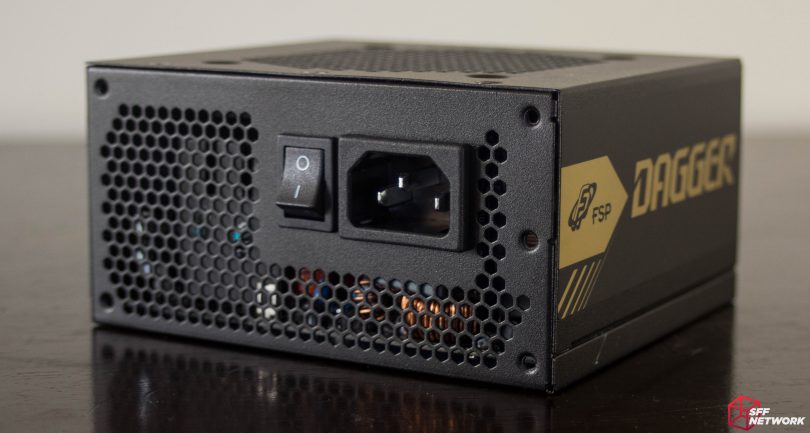 The rear panel has a regular hex hole pattern. A power switch is also fitted, which is a nice to have feature. 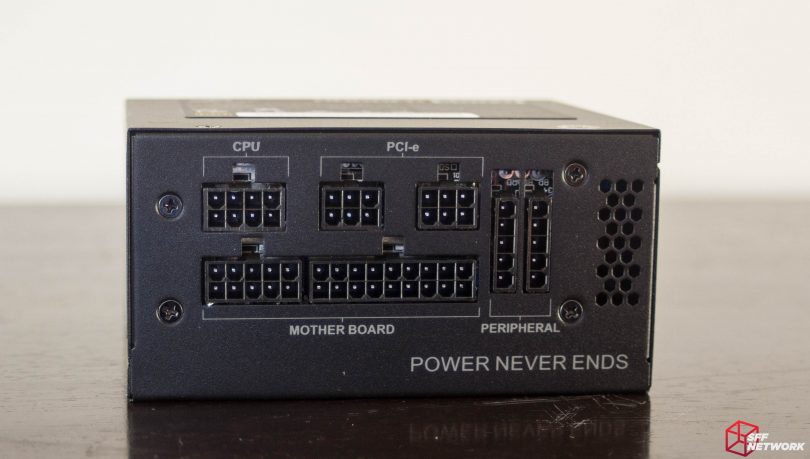 On the front, the modular connectors are flush to the shell, ensuring that connected plugs won’t stick out too far and break compatibility with more condensed cases. A single small vent is found back here, to one side of the modular connectors. Each connector is marked somewhat clearly, and as mentioned above, have different plugs for each type. I’ll make it clear here, I’ve never been a fan of these ‘split’ ATX connectors on the PSU end – they are messier, and the modders among us find them very frustrating to sleeve and route nicely. The slogan ‘POWER NEVER ENDS’ is off towards the bottom of the PSU. I sure hope the power never ends, or we’d have to take FSP up on their 5 year warranty! Speaking of which, the warranty on this product is very much in the middle of the pack for the market, beating Silverstone’s SFX units, but being 2 years short of Corsair’s.

Let’s see if FSP is being truthful with their claims of all Japanese capacitors. 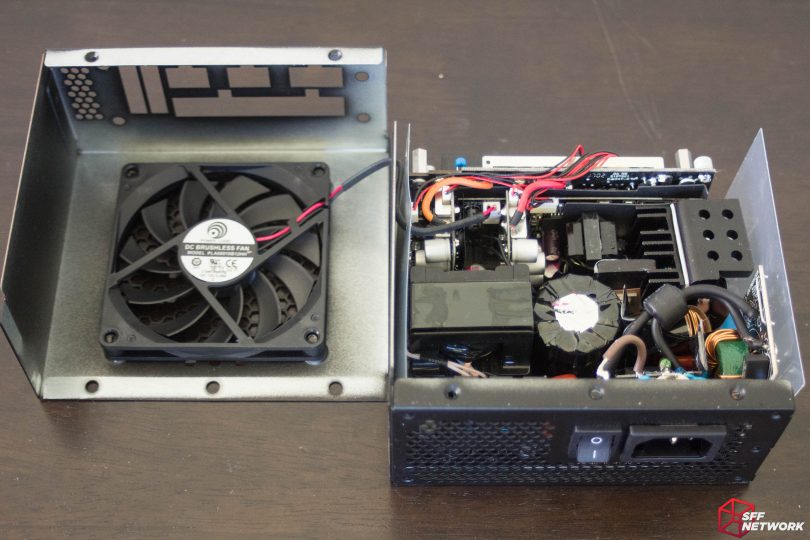 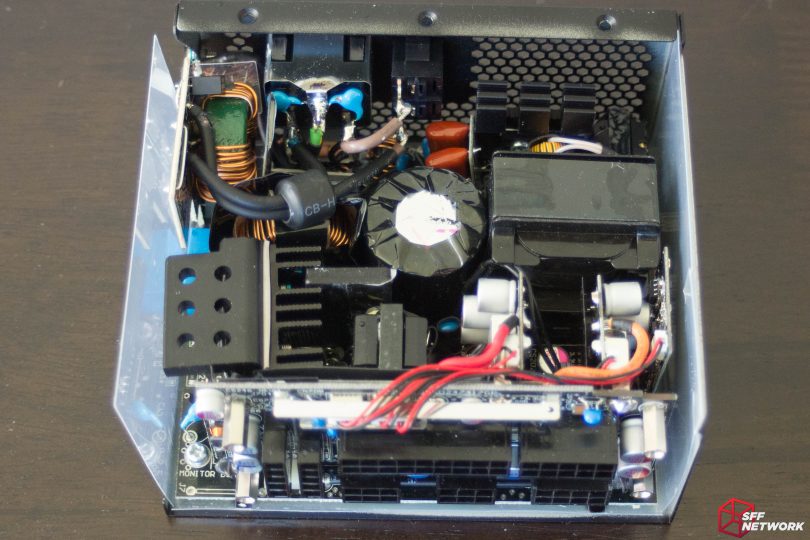 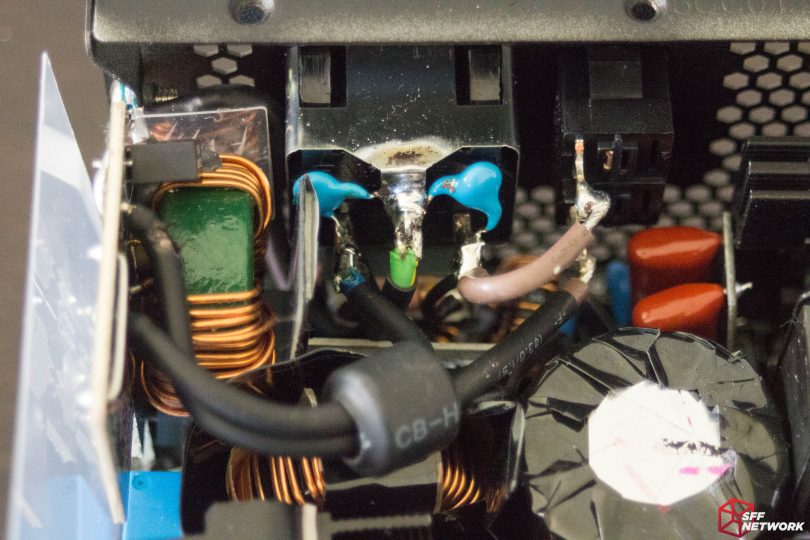 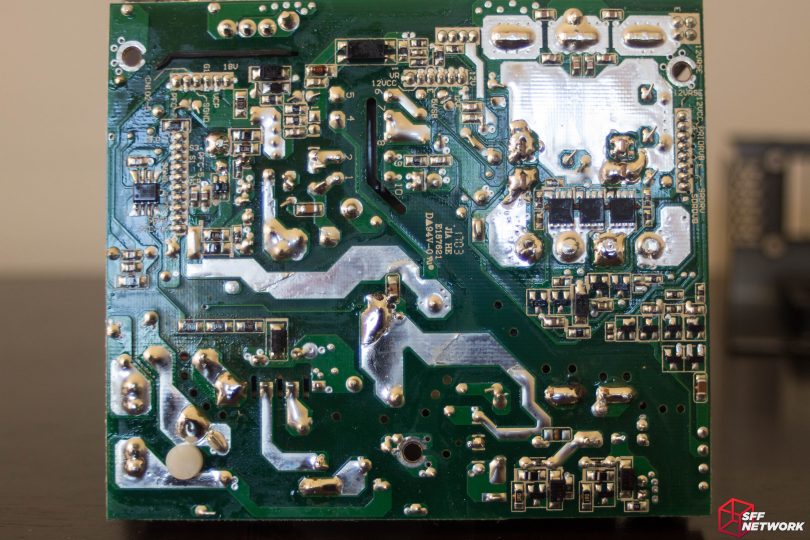 Now for the capacitor question – are they all Japanese as claimed? Murata, Toshin Kogyo, and CapXon capacitors are the brands that I can see in this PSU (without desoldering anything). The appearance of CapXon has brought some doubt into my mind about long-term reliability, as whilst they do have a factory in Japan, fulfilling the claim of “100% Japan-made electrolytic capacitors”, CapXon doesn’t have the best reputation for longevity. All caps appear to be rated for 105°C, which does redeem the cap choices somewhat. Speaking of caps, the input side of the circuitry includes two Y class caps and an X class – a full complement.

The soldering appears to be excellent, including on the daughter boards for the EMI compliance, monitoring and modular connectors. 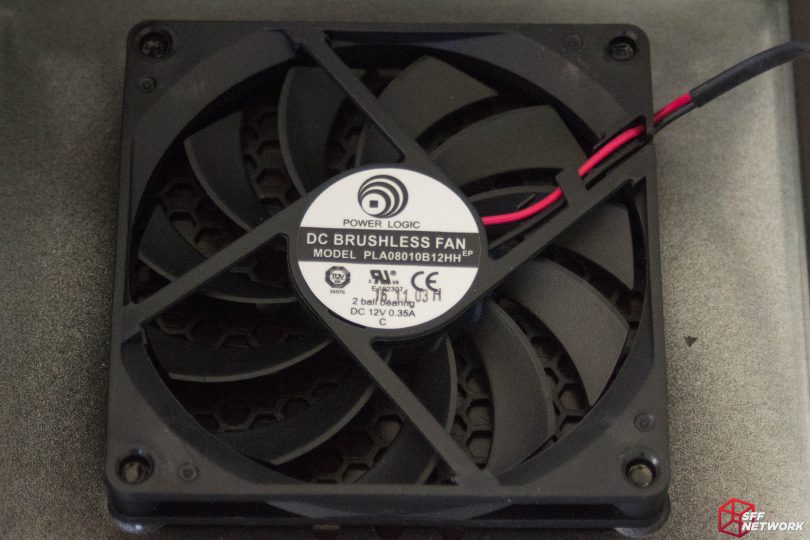 The fan is a “PLA08010B12HH”, manufactured by Power Logic. This fan has double ball bearings, which is typically much better for reliability than the sleeve bearings found in cheaper fans. The fan consumes a maximum of 4.2W and can rotate at up to 4000 RPM. At this speed it can push 29.23 CFM, with a maximum static pressure of 2.99mm H2O. It can however produce a rated 35.7dB(A) of sound.

As mentioned above, we do not possess the equipment or expertise to properly test power supplies outside of somewhat basic functionality testing. However, we feel that opinions on basic parameters, such as fan noise, performance, and protections are very important. Power supplies from reputable manufacturers nowadays generally fall within the ATX specification without much issue – but we still suggest you check other sources for a fuller picture of a particular model’s performance.

With that out of the way, let’s get testing!

To test this power supply, I created a load from various components I have here. Unfortunately at the moment I don’t have any power hungry graphics cards, or this would have been soooo much easier.

To fully load the PSU, I loaded up Prime95 Blend, Furmark, and performed file transfers on all disks. This was an incredibly painful user experience,  but worth it in the pursuit of PSU testing!

The FSP Dagger 600W does not have a fanless mode – the fan is on all the time, even at idle. However, at low fan speeds, the fan is quiet and unobtrusive, with no harsh aural characteristics. To replicate a hot, loaded system, I introduced a large quantity of hot air courtesy of a hair dryer. I was able to add 500W of heat using this, which, including the system, is above the Dagger’s 600W rating, but it enabled me to test the fan at high speeds, and if the OTP, a critical function, worked.

Adding the heat, I noted the fan did speed up significantly after a while. It seems that the fan profile is very passive, only speeding up in the high end. This is good news as a high-speed 80mm fan can be.. irritating. It still exhibits no nasty aural characteristics, though, even at high loads.

When the heat load is removed, the fan quickly spins down to lower speeds, showing that the cooling design of this PSU allows quick reduction in temperatures. This is great to see – heat retention means that at the next load spike the PSU is already loaded thermally and this could cause undesirable operation.

I returned the heat to the power supply for a longer period, and the OTP activated as expected!

All in all, this power supply is well built, and appears to be a very reliable choice for a SFF build. Before we pass judgement, we need to see where this product sits in the market. Thusly, courtesy of NewEgg, here are the prices for the competition at the time of publishing (excluding rebates):

The 600W FSP Dagger sits about 10% cheaper than the Corsair, Enermax, and Silverstone competitors. So we can take this into account when rating this product.

Overall, this is a power supply I can recommend as a serious contender in selecting a PSU for your build. I encountered no issues running this unit, and the included accessories complement the product well. I’d be happy to use the FSP Dagger 600W in future builds!

Thoughts? Power your way over to the forum.