With the second generation of Ryzen processors on the market, it’s only fitting than a new, upgraded, chipset family is available. With this in mind, today we are looking at ASRock’s first AMD 400 series M-ITX board, the X470 Gaming-ITX/ac. This board is a younger brother to the previously reviewed X370 Gaming-ITX/ac, with a few changes to the layout, as well as the aesthetic.

ASRock’s partnership with the Fatal1ty brand goes back some time, and has always been associated with bright, Gam3r-esque branding and design. Not any more it seems, with this new generation of motherboards taking on a much more subtle design ethos. Let’s dive deeper.

From the product page, here. 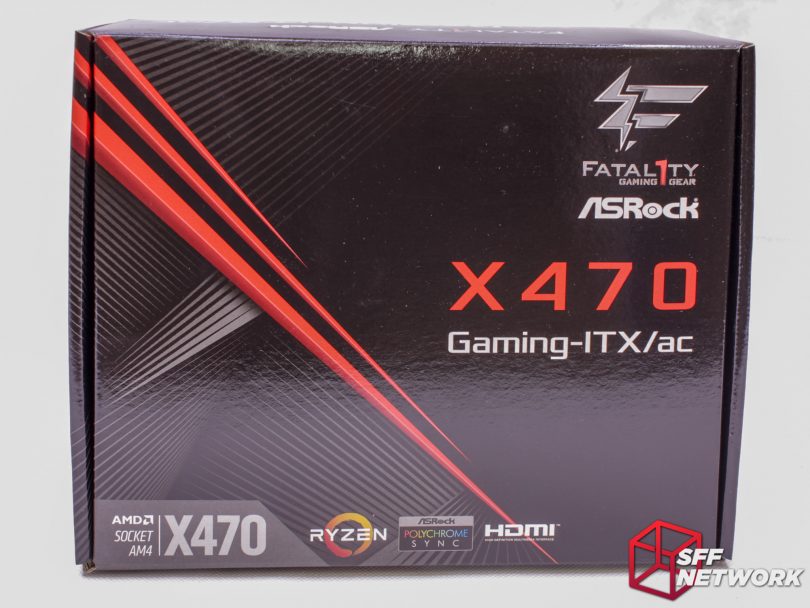 Well, some of the Gam3r aesthetic still remains, however, not to the level of previous generations. 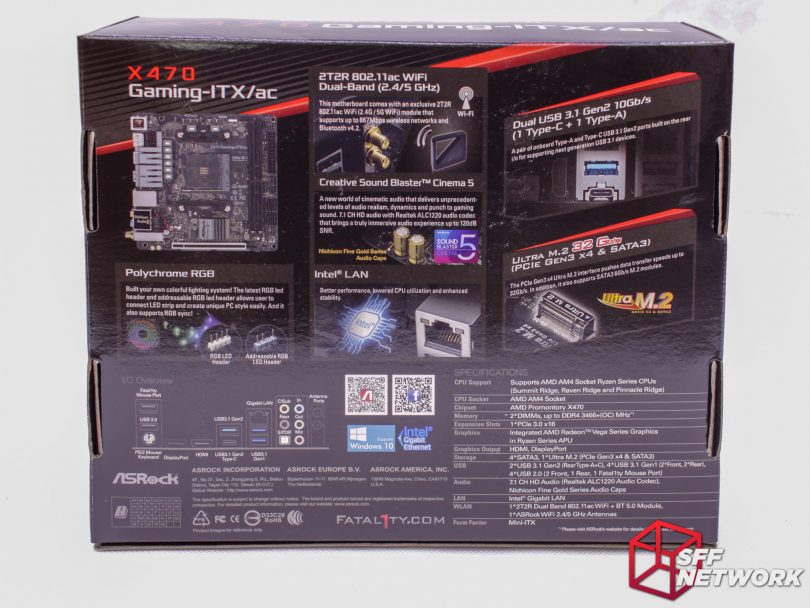 For those who retail shop, the back of the box is well-covered with marketing – from the board’s RGB functionality (of course), to the 802.11ac WiFi, SoundBlaster Audio, Intel LAN IC, Dual USB3.1 Gen 2 and finally the M.2 slot. Specs 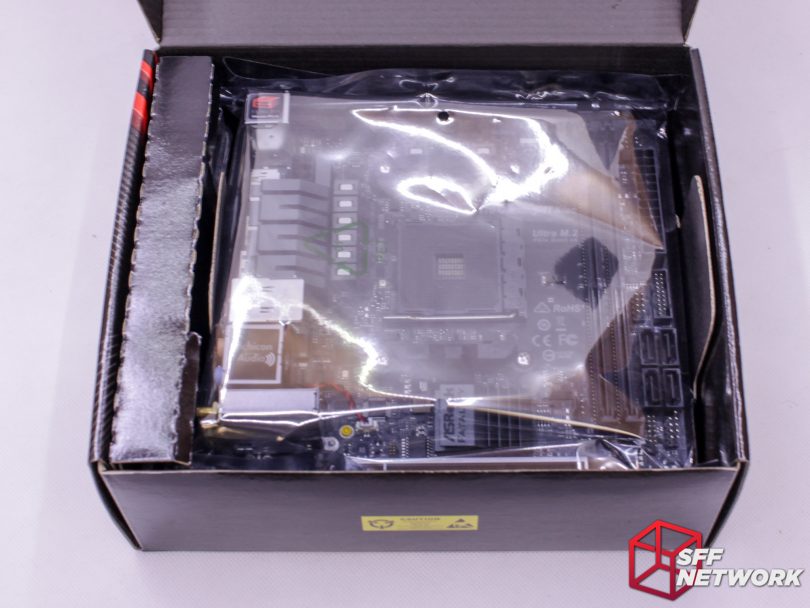 The motherboard is packaged in the usual way. Not much to report here. 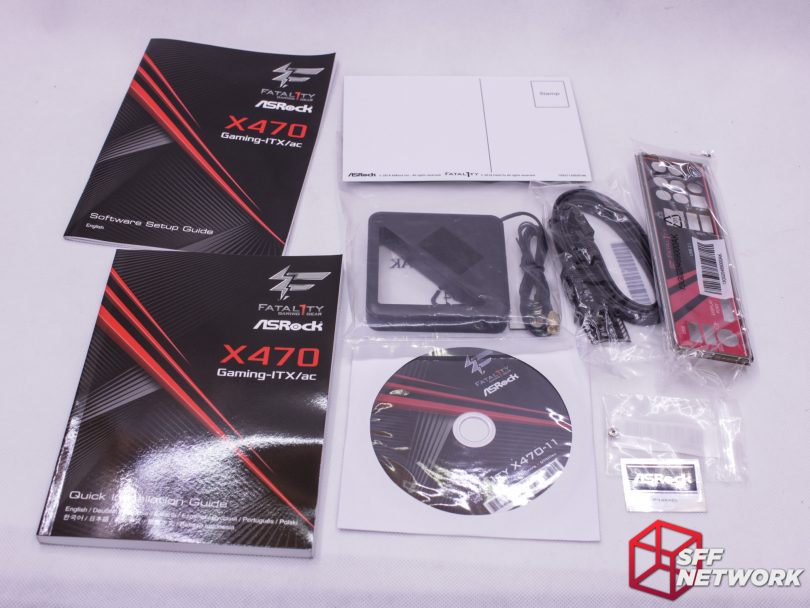 The accessory pack – a pair of manuals (one for software, one for the hardware), a dual band WiFi antenna, a pair of SATA cables, and a Fatal1ty themed IO shield. We did get a glimpse into the retro here though, with the usual driver CD, but also with the inclusion of a case sticker (!) and a post card with Fatal1ty branding on the front. A postcard! 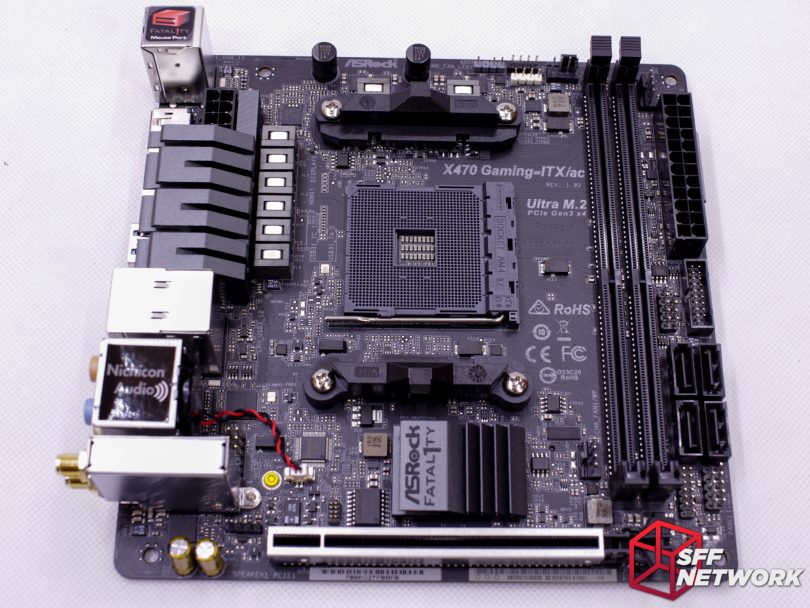 A pretty standard layout for AMD based boards at this stage, the ASRock Fatal1ty X470 Gaming-ITX/ac aims to refine the platform, rather than reinvent the wheel. Ample clearance between the CPU socket and the RAM slots is designed for, as is PCIe slot to CPU socket clearance. What’s really apparent here is the grey-scale colour scheme. The red design theme of the previous generation board is gone, replaced (thankfully) with subtlety. 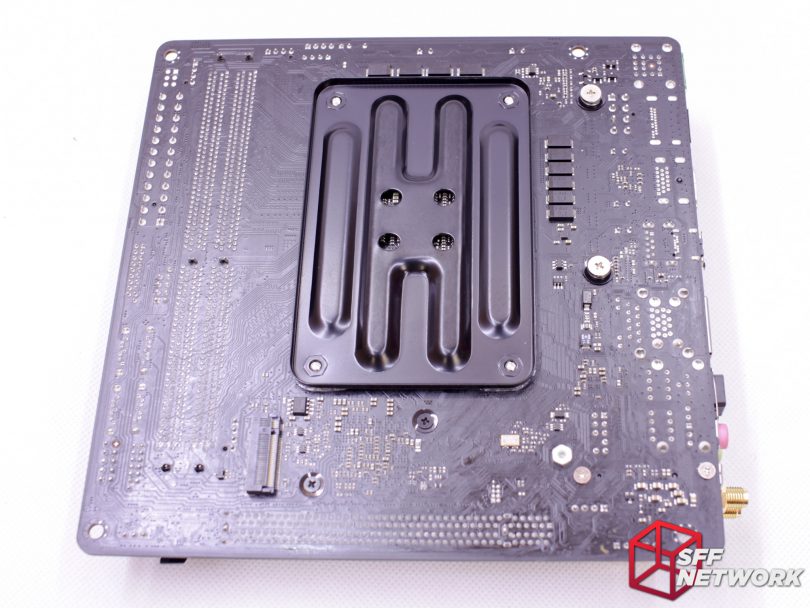 The sole M.2 slot is placed on the rear of the board – a pain for upgrades, but rather to be expected with the size of AMD’s CPU cooling keepout zone. 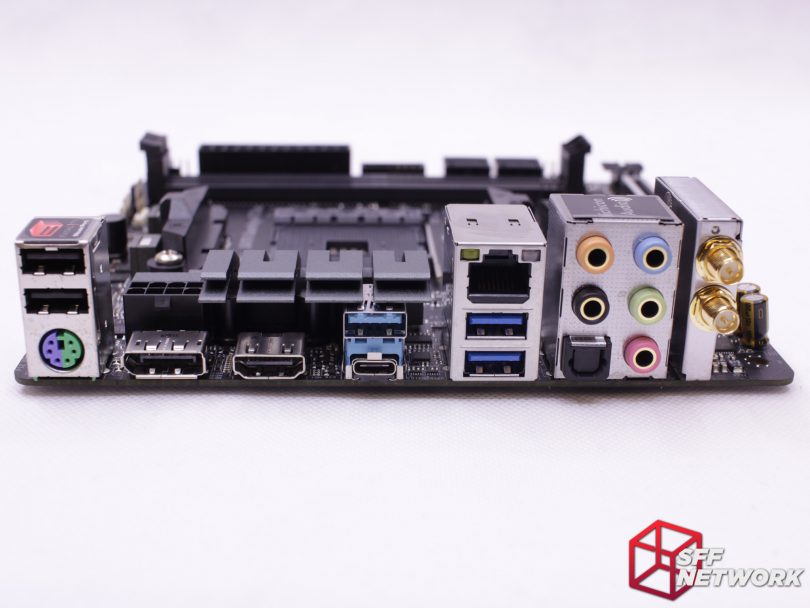 Expansion ports a plenty, with most bases covered by the selection on offer. From the left, we have a blended PS/2 port for keyboard and mouse (compatible with a splitter adapter), and a pair of USB2.0 ports. One of these ports is a “Fatal1ty Mouse Port” which can be tweaked with the ASRock F-Stream software to increase the polling rate of your mouse.

From here, we have the two display outputs (no triple screen here, sadly), followed by the two USB 3.1 Gen 2 ports – in the form of a Type-A and a Type-C port. After this are a pair of USB 3.1 Gen 1 Type-A ports, topped off with the RJ45 port for the Intel Gigabit networking. 7.1 channels, including optical, audio is next, and finally, a pair of antenna ports for the Intel based 802.11ac dual-band WiFi.

Let’s have a closer look at the Fatal1ty X470 Gaming-ITX/ac! 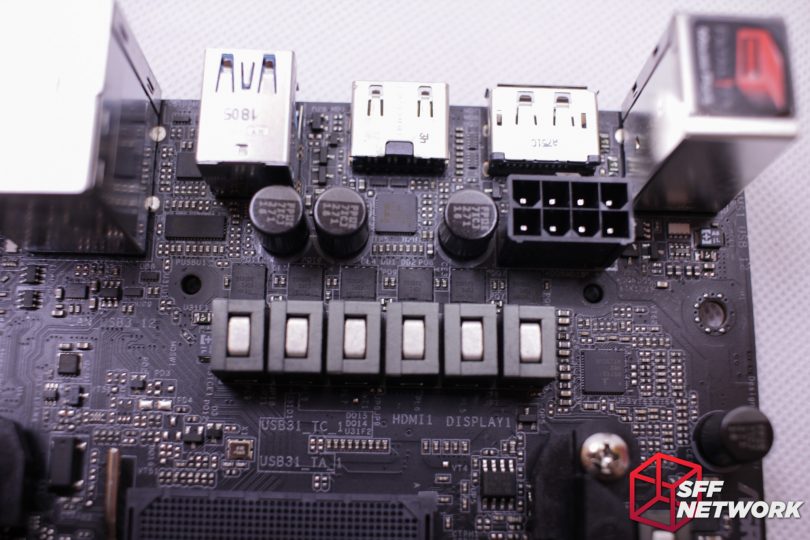 Powering your processor is a sextet of VRM chips, namely the Fairchild YH208P. Alas, datasheets weren’t to hand at time of writing. Controlling these ICs is a 95712 HRZ, a dedicated AMD CPU VRM driver chip. Nifty! Apart from the slight change in VRMs, the rest of the power section looks to be a minor iteration of the previous generation board’s setup. 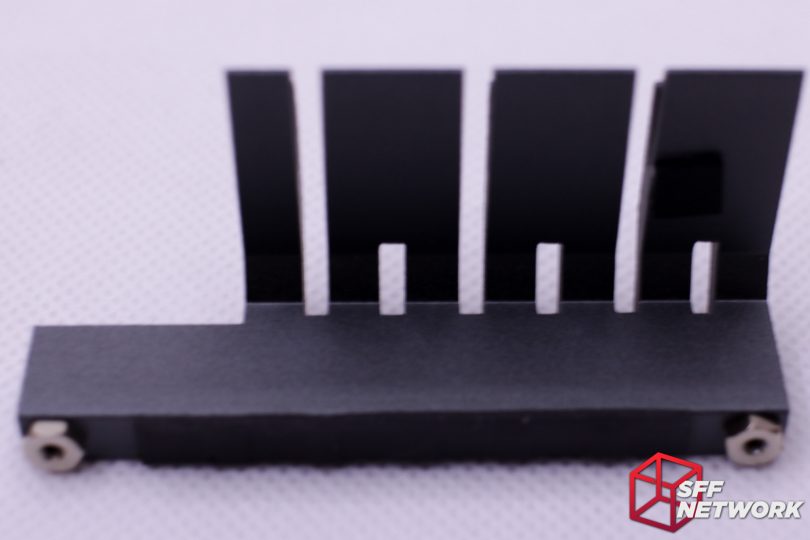 The VRM heatsink is a solid unit, with minimal thermal pad thickness. None of the previous generation’s thick or thin thermal pad nonsense! 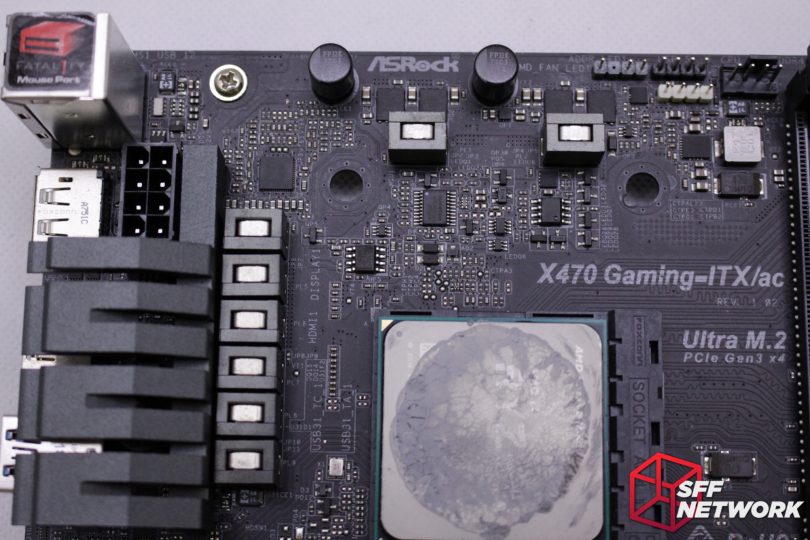 Above the CPU socket are the remaining 2 VRM phases. To the top right are a quartet of headers – An AMD cooler RGB header, USB header, addressable RGB LED header and finally, the PWM CPU fan header. 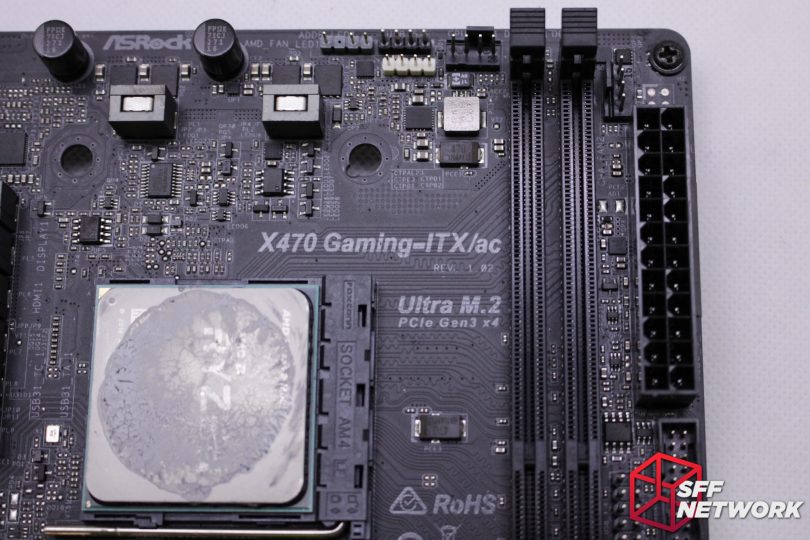 To the right of the dual RAM slots is another CPU fan header (PWM, again), and the typical ATX 24-Pin connector. Down the board we go.. 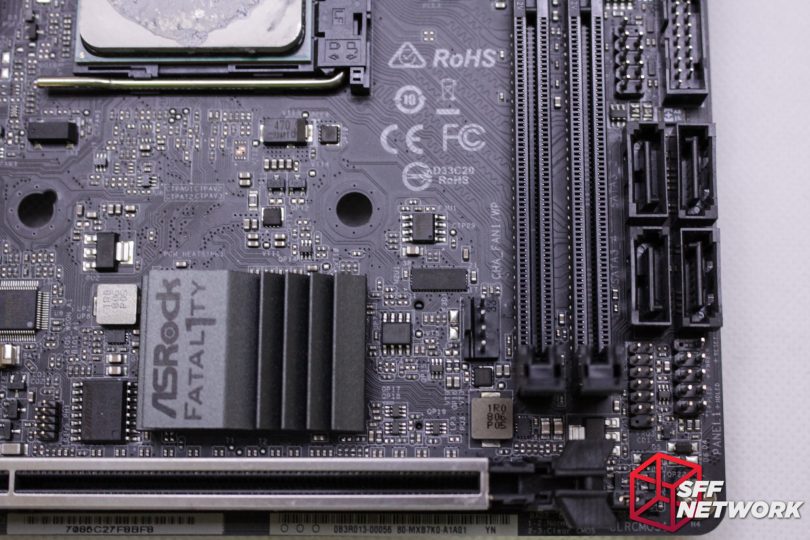 A USB 3 header, USB2 header, quad SATA ports, front panel header and finally, the LPC header for a TPM. Nestled between the chipset heatsink and the RAM slots is a third PWM fan header, this time for a chassis fan. 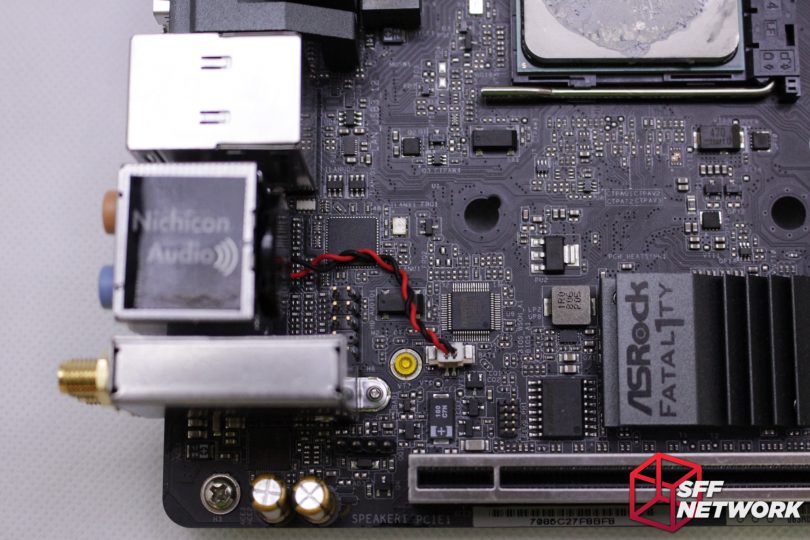 Finally, the audio corner of the board, with the front panel audio header above the WiFi can, and a chassis speaker header below.

Well, here was our first hurdle with testing this board. After a few weird glitches (BIOS shows 56GB of RAM in one channel? Boot Loop??) one remained – the inability to screenshot in the UEFI environment. Some troubleshooting later, it turns out that the board will only save a screenshot to a drive if it’s added after you boot into the UEFI system. Minor niggle, really, but still! 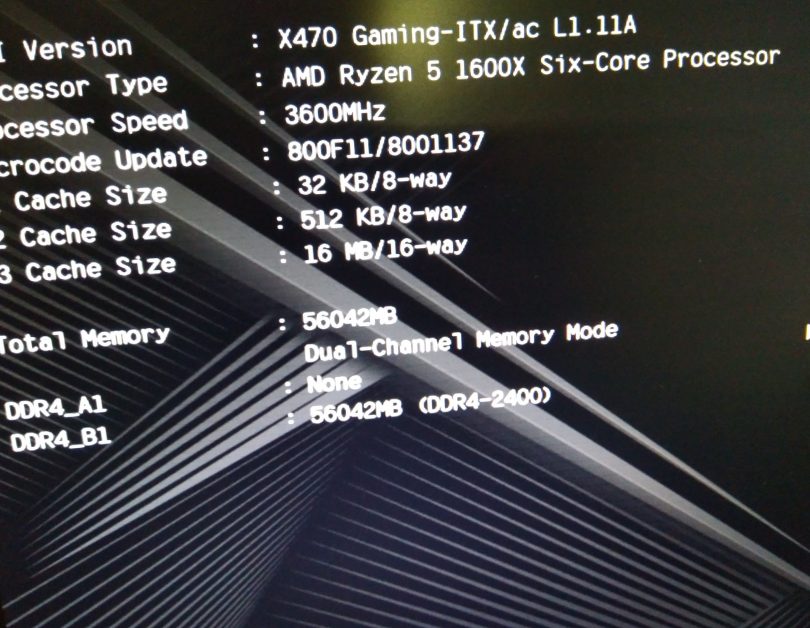 Overall, the experience in building a system with this board, and running it for a few days was smooth. The layout of the board lends itself to an easy build, with no cables running over the RAM slots, or CPU socket area. AMD’s keepout zone for CPU coolers seems to have been followed, with no issues fitting any of the various coolers I ran on this board during evaluation.

For those who, for some reason, want to run a 8th Gen (Bulldozer Architecture) Bristol Ridge APU on the platform, well, the news is good and bad. The Bristol Ridge APUs aren’t officially supported, but my A8-9600 test processor did boot, and was recognised. I was able to boot into Windows after a few boots – the first few power cycles did not recognise the M.2 SSD we use for testing – and the system worked as per normal, with all ports and devices tested and working. Noticeably, this 3-4 boot cycles before the board would recognise the M.2 SSD was repeated every time I attempted to boot the system. The GPU was given 8 PCIe 3.0 lanes, as per the CPU spec, and no other anomalies were found.

Tweaking, without messing with voltage (replacing this kit of RAM is rather expensive these days!), I managed to hit 3600MHz, with timings of 16-18-18-18-39. Not world record beating, but a very commendable performance, considering this kit holds the second place in HWBot’s Ryzen 5 1600X memory frequency rankings!  Note that these RAM speeds were tested with Prime95 Blend for 30 minutes, a rather brutal reliability test for a RAM overclock.

Well, this was a fail. After selecting “x8/x8” mode in BIOS (the board refused to see any card on our Amerirack ARC1-PELY423-CxV3 riser when left at the original “1x  x16” mode in BIOS), we had only one card config work – a GTX 750 Ti and a BlackMagic Intensity Pro capture card. Any attempt to use the riser with a card with more than 1 PCIe lane meant that the second card (the non-GPU) wasn’t seen by the OS.

The following card configs were tested;

Sometimes iteration can be more important than innovation, something ASRock has shown here. Some subtle tweaks to the previous generation, some tidying up of the aesthetic, and the new Fatal1ty X470 Gaming-ITX/ac is ready for your build. However, it may not be the most… stable… board to purchase at this time.

Whilst I had a good experience with the board inside Windows, the glitches I had with the UEFI left a slightly bitter taste in my mouth – can we rely on this long term? I do have to note that the board was supplied to me with a Beta version BIOS (v1.11a), however the only changes noted over the original version is noted on ASRock’s website as being AGESA updates – which is only really for CPU support updates.

Overclocking was on par with the previous generation, and really, on par with the industry. However, we are testing this with a single sample of the Ryzen 5 1600X, purchased (with support from our community) from retail. It could be the processor limiting us in this regard! However, we noted no changes to voltages needed and maximum clock speeds versus the previous generation – so take that as you will.

So, can I recommend the ASRock Fatal1ty X470 Gaming-ITX/ac? Well… yes, with some caveats. The board currently sits in the middle of the price range for X470 M-ITX boards – below the overpriced ASUS product but above the BIOSTAR board. If you want to use AMD’s StoreMI and want to build M-ITX? This is the board you should go for. But, at a $20 premium over the previous generation, you’re paying mostly for aesthetics and mild tweaks rather than an outright advantage.