Edit: Our review of the SilverStone SX800-LTI here.

In the course of research for the Lian Li PE-750 review, I ending up checking the UL manufacturer directory listing for SilverStone and noticed references to a SX800-LTI. As I went over in the SX700-LPT review, according to SilverStone’s current SFF PSU nomenclature, the “SX800-LTI” model number translates to a 800W SFX-L Titanium-rated fully-modular power supply.

Curious if this was real I contacted Tony Ou, SilverStone’s marketing manager, and even though he’s busy with Computex, he replied that it is indeed real, they announced it today, and it will (hopefully) be available in Q4 this year!

There is only one video of the SilverStone booth I could find so far but it’s in Thai so while I can’t understand what they’re saying, there is some information we can glean from the video. 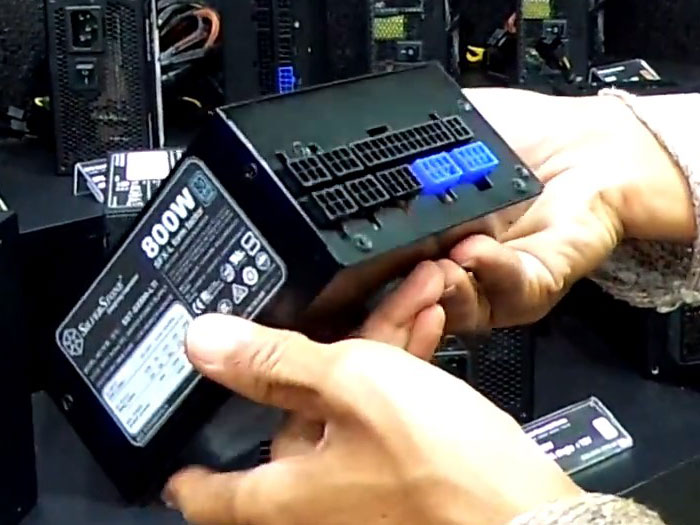 The main tidbit I gathered from the video is that this new unit is almost certainly based off the same Enhance Electronics design used in the Lian Li PE-750 due to the modular connector layout, which is identical to the Lian Li. I’ll be curious if the extra 4-pin connector that’s part of the 24-pin cable on the Lian Li will make it to the production design of the SilverStone though since it would break cable compatibility with the other SilverStone modular power supplies.

If the platform is capable of 80 Plus Titanium efficiency, that may also explain why I found the fan profile to be so relaxed on the PE-750 in comparison to the SilverStone SX700-LPT, which is built on a Sirfa/High Power platform.

Just last month Lian Li one-upped SilverStone’s long-awaited 700W SFX-L Platinum unit by announcing and then quickly releasing a 750W competitor and now SilverStone is aiming to retake the wattage and efficiency crown with this new model. Some may wonder what’s the use of even more watts and efficiency but I think it’s useful for the SFF market for these type of power supplies to exist even if most users have no need for them in their own builds. The availability of high wattages serve as a counterpoint to the argument that SFF is only good for undemanding mainstream gaming builds and they enable smaller microATX, and even ATX, case designs that still cater to high-end dual-GPU users. The higher efficiency I would argue is even more important for the SFX and SFX-L form factors than it is for ATX because the more compact housings and smaller and/or slimmer fans limits the cooling potential compared to the larger ATX standard, so higher efficiency means less waste heat, so less cooling is needed and thus (in theory) less noise.

This is very much breaking news so I’ll update the article as more information comes out.