Noctua did not have a booth at CES earlier this year so the last time we had an update on what they’ve been working on was a year ago at the previous Computex. This year they have several products in the works that are relevant to our interests.

First up is an update on the slim 120mm fan they’ve been working on for some time and I have been eagerly anticipating. They originally showed it off at the 2014 Computex and back then it was scheduled to release in the second half of the following year (which obviously didn’t happen). 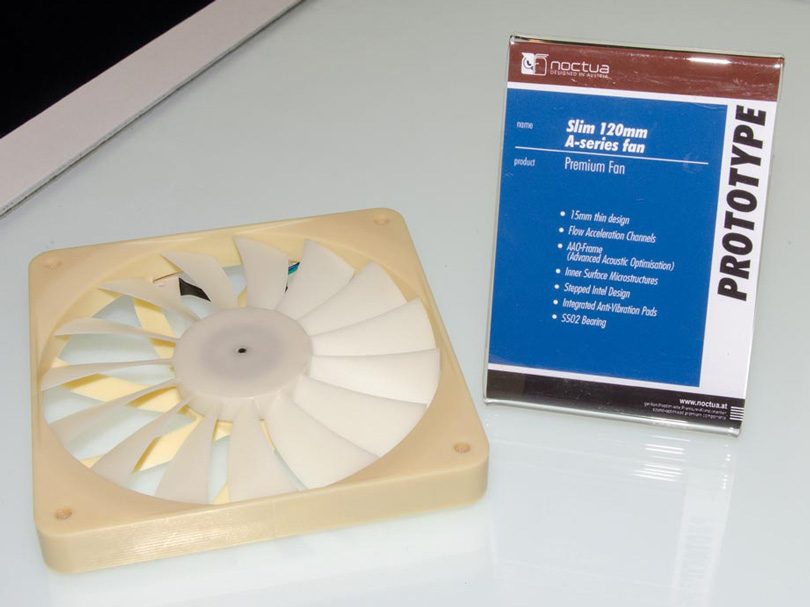 Here’s the slim 120mm prototype from Computex 2014. At this stage it had 15 blades and the frame looks to be 3D printed while the blades are probably machined. 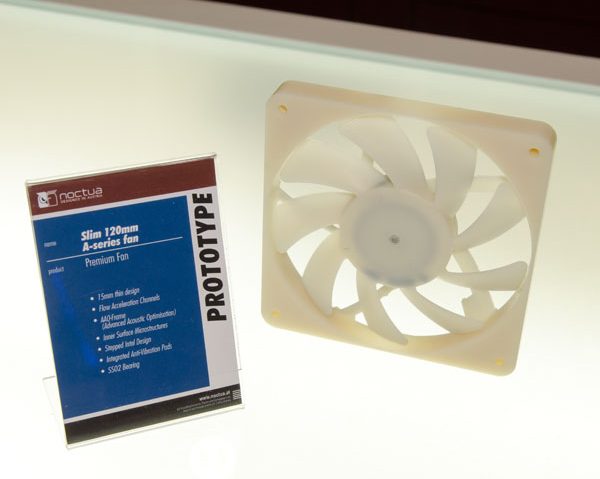 At last year’s Computex, the slim 120mm prototype had lost 6 blades and going by the yellow plastic was still in the prototyping stage. Note that according to the placard on both this version and the previous one, the fan featured the standard Noctua SSO2 bearing, which is a type of Fluid Dynamic Bearing. 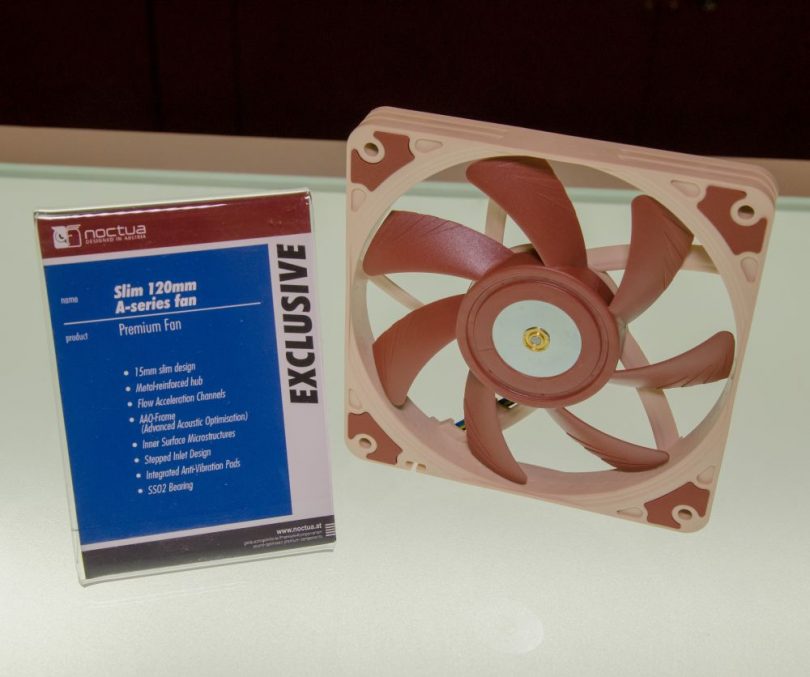 And finally we have a look at what appears to be a production-ready version at this year’s Computex, courtesy of TechPowerUp. It’s lost 2 more blades for a final count of 7 fan blades.

Update: Hardware.fr has an article with a better picture of the placard and the slim 120mm does have Noctua’s signature SSO2 bearings.

No word on price, availability, or even RPM range of the slim 120mm yet. 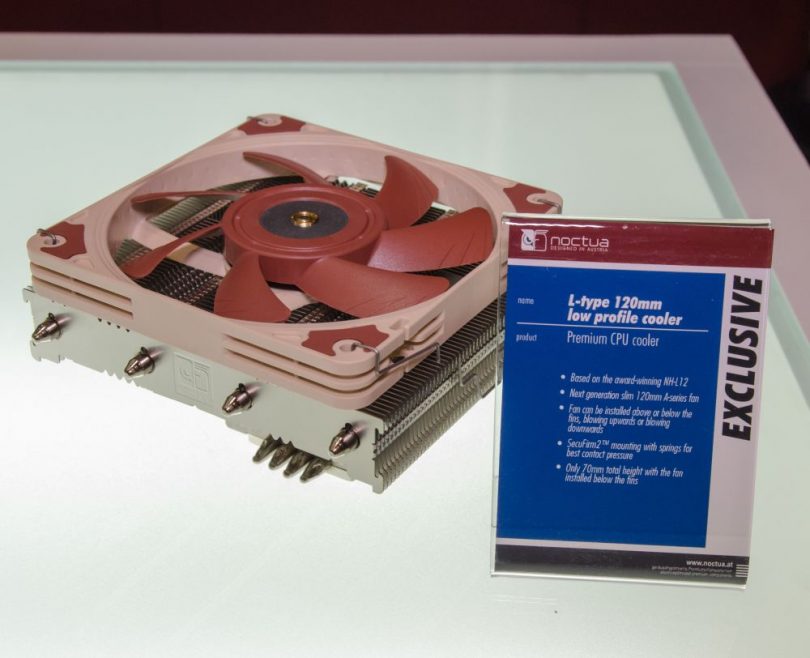 There isn’t any details of it yet, but TechPowerUp took a picture of what’s either an update or alternative to the NH-L12 low-profile heatsink. Visually it looks the same with perhaps the only change being the inclusion of the slim 120mm fan for a lower height with a 120mm fan installed on top. 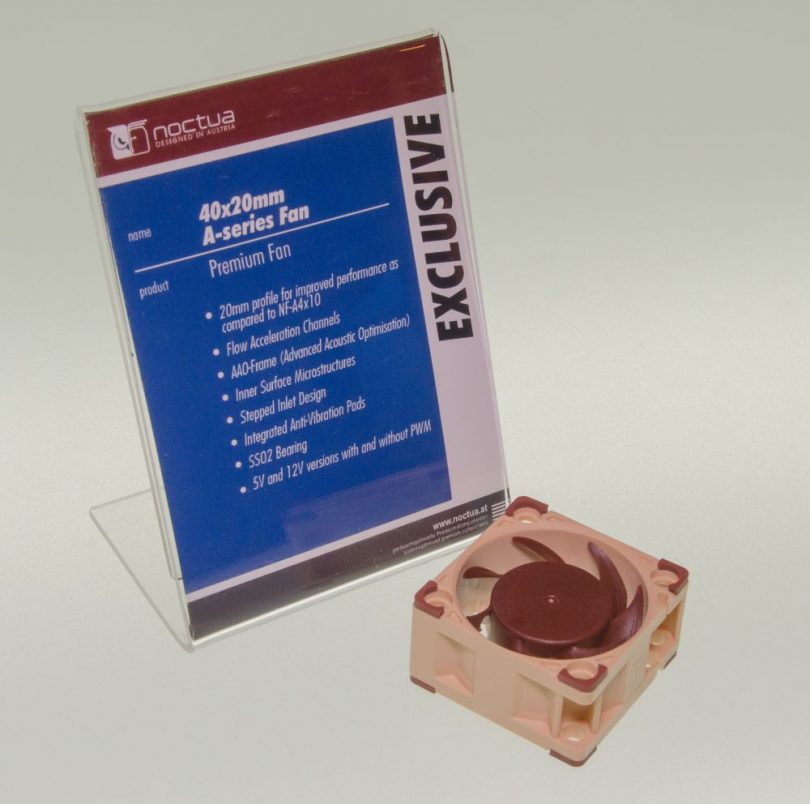 Noctua was also showing off a range of smaller fans, including a 40 x 20mm and a range of 15mm thick 50-80mm fans. TechPowerUp says these fans are DBB when the placard clearly says SSO2 so there may be hope yet for the slim 120mm. They will come in both 12V and 5V versions and in PWM and non-PWM version. 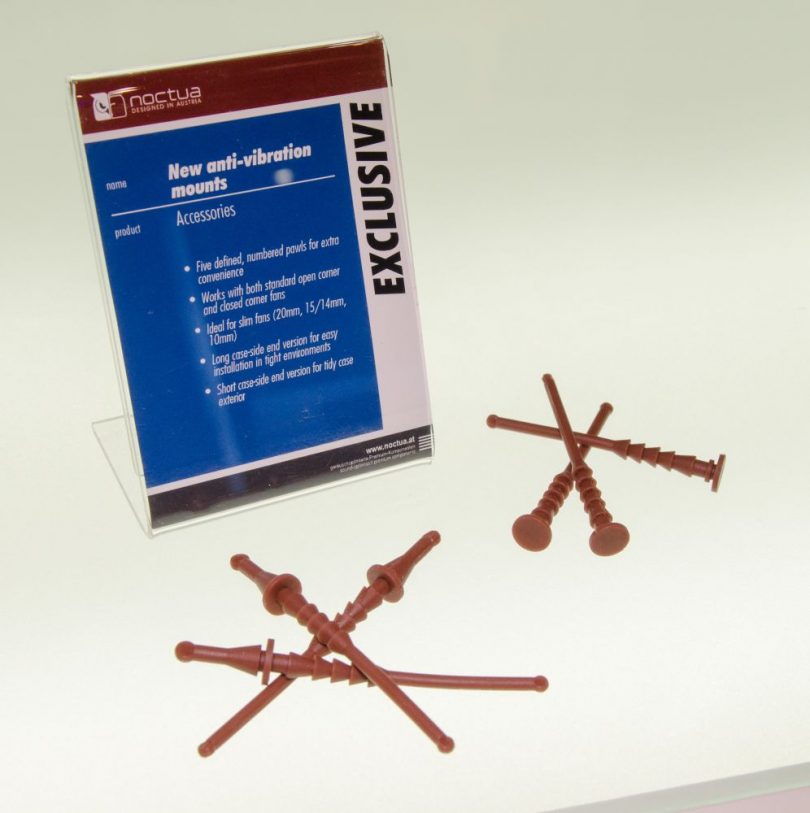 Typical computer fans are 25mm thick and Noctua’s current anti-vibration mounts are designed for those, but they have a new design that nicely works with a range of fan thicknesses. This is a problem I ran into with their 92 x 15mm fan so I’m glad they’re addressing it. 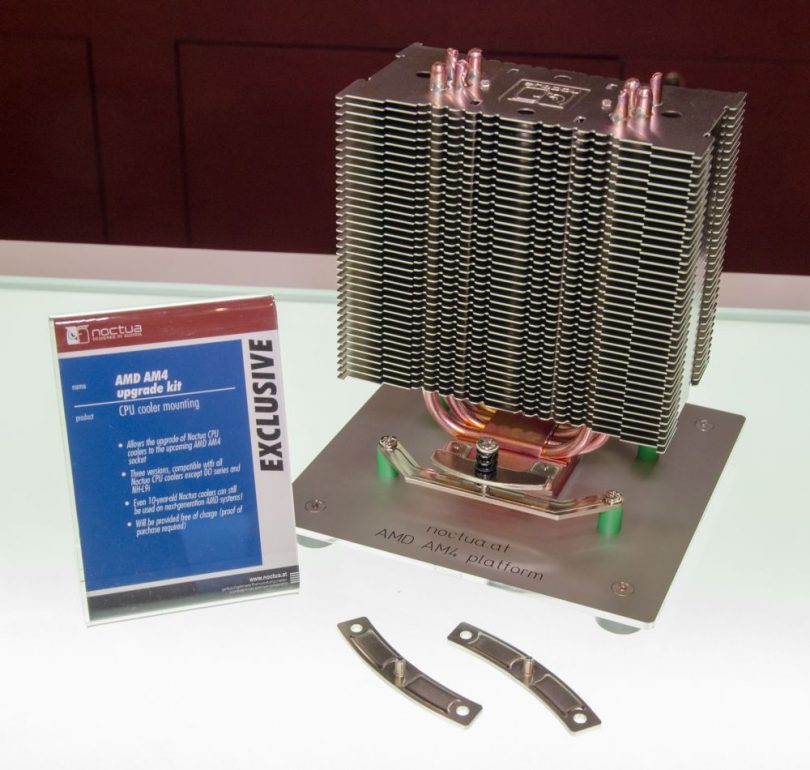 Hopefully we’ll hear more at AMD’s AM4 event tomorrow, but it seems that the new AM4 socket may use a different heatsink mounting system after all. Earlier rumors suggested it would use the same mounting as AM3 but Noctua has an AM4 mount upgrade kit for almost all their previous heatsinks. It is still possible it’s compatible and Noctua has just taken the opportunity of a new socket to release an improved mounting bracket design. Either way, as usual for Noctua, the upgrade kit is available for free to existing customers with a proof of purchase.

There doesn’t seem to be an update to the Active Noise Cancellation project so I’m not sure if it’s still in development or if they determined it wasn’t viable.