When we rolled up to the SilverStone booth on the opening day of Computex, we got there a bit early and planned to check out the nearby booths before our meeting with SilverStone.  But that plan got derailed when we spied this fascinating prototype at the front of the booth: 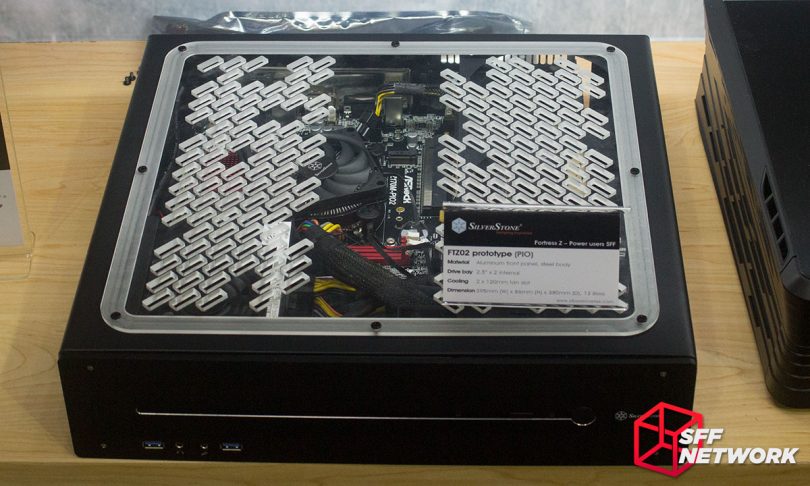 This is a prototype case that utilizes the PIO motherboard form factor, a rare variety of mobo that features a PCIe slot along the top edge of the board rotated so that it is parallel with the plane of the motherboard’s PCB. There has been discussion on the forum for the past two years due to the potential it holds for console-style case layouts with the GPU parallel to the motherboard, but with the card’s fans facing up without resorting to an extra-long PCIe extender.

The problem has been retail availability (especially outside China) of these PIO motherboards. PIO stands for Parts In One, essentially a DIY AIO and while it’s apparently popular in cyber cafes in China, it’s a market segment that doesn’t exist elsewhere. 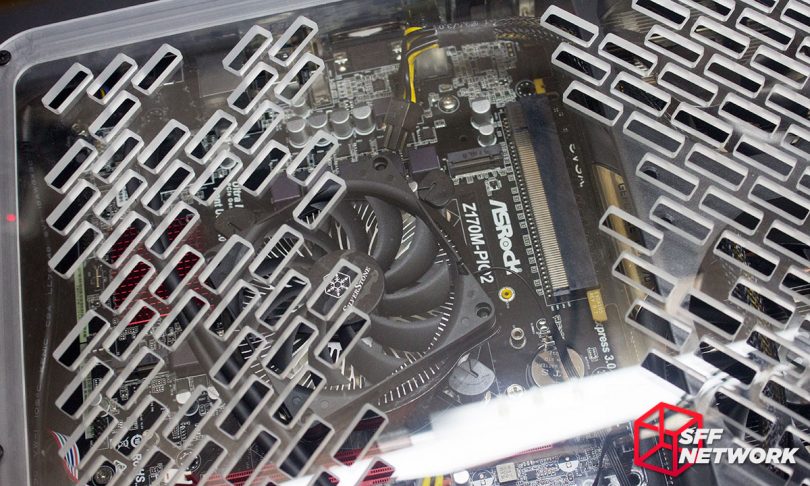 SilverStone is partnering with ASRock and ASUS to ensure retail availability of compatible boards for this project. The ASRock Z170M-PIO2 is used in the prototype case on display. 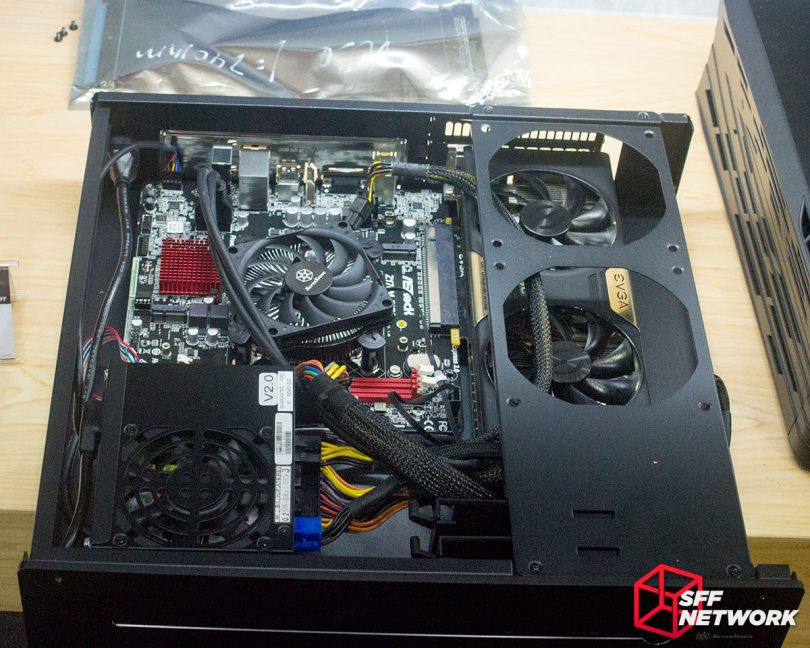 The design is still in flux and may see changes before production, in fact, this particular unit was only completed 10 days ago. The current design though features three expansions slots for extra thick video cards, or to allow fans to be mounted in front of the video card’s fans for additional cooling. There are 2x 2.5″ drive caddies sit against the front of the frame and there is support for either SFX or SFX-L power supplies. 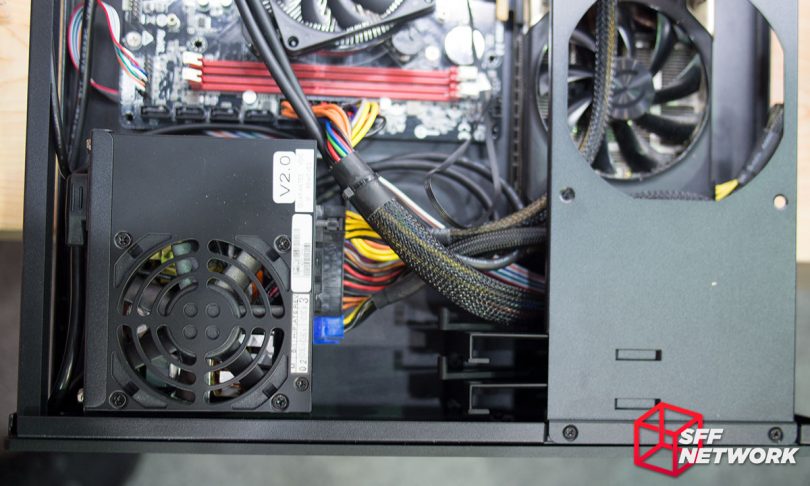 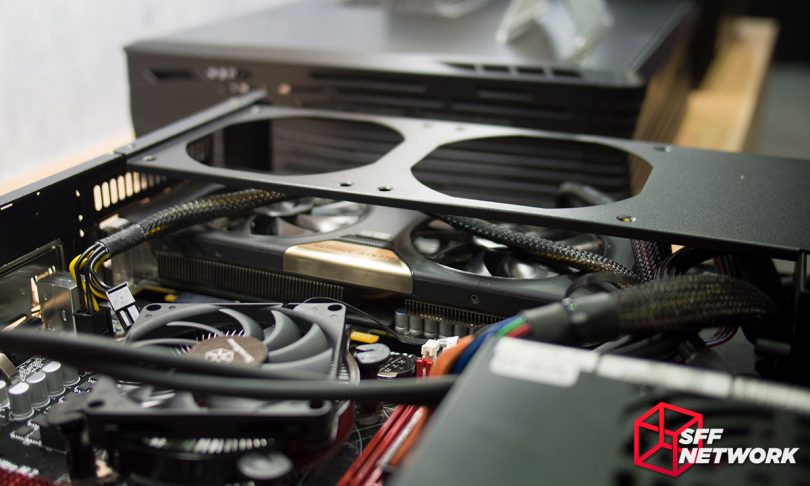 SilverStone also had another prototype case using an unusual motherboard from ASRock, this time of the Micro-STX form factor. 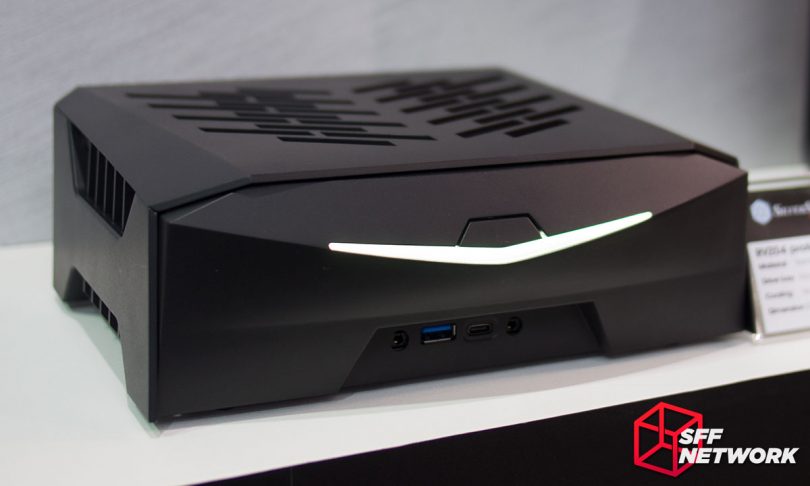 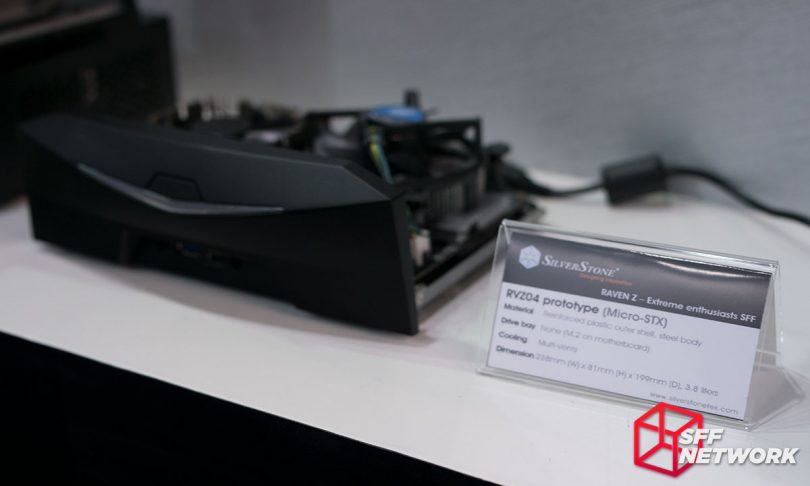 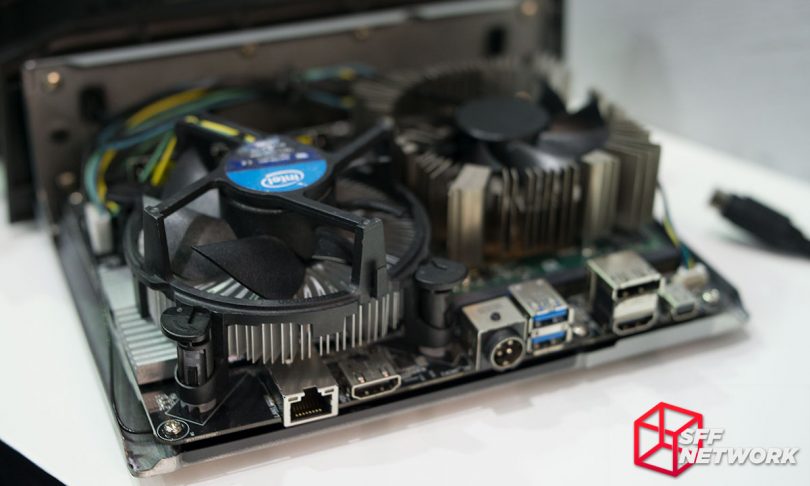 The interior layout is pretty straightforward. There is no provision for 2.5″ drives, so the only storage options are the 3x M.2 slots on the backside of the Micro-STX motherboard. 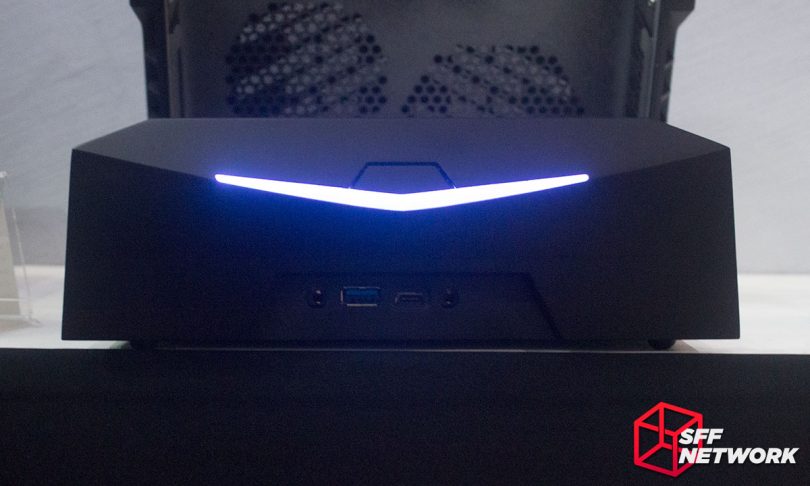 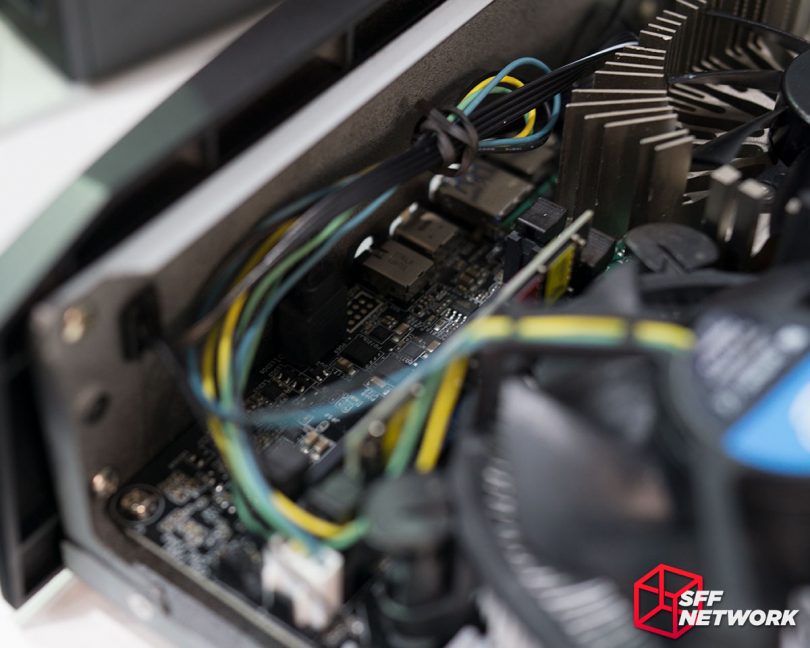 I did not realize this before, but the Micro-STX motherboards feature an RGB header, and the front LED on the RVZ04 is compatible with it. 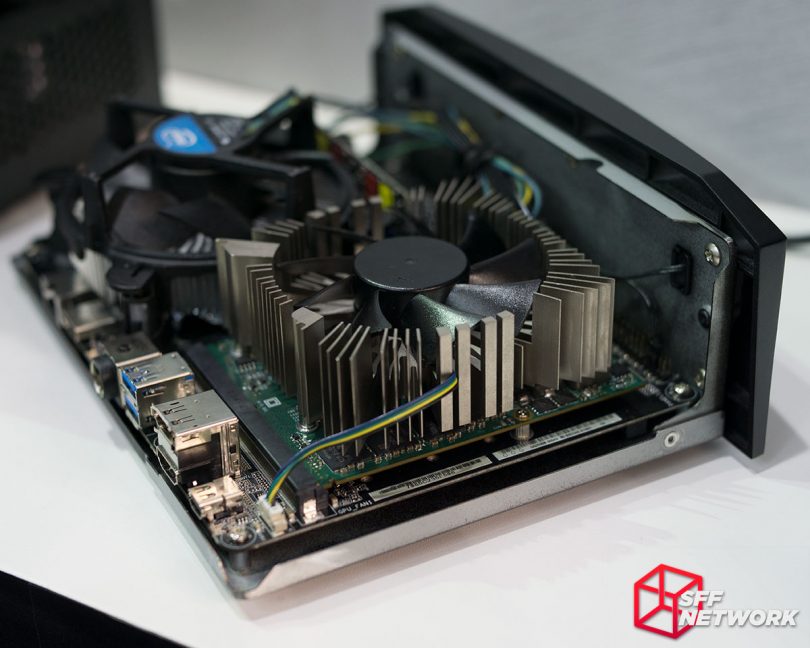 There is no set release date since it’s dependent on the timing of the Micro-STX release, but it should hopefully be later this year.

Funnily enough the use of a PIO board eliminates the need for it, but SilverStone also had a sample of a flexible PCIe extender nearby that we briefly looked at. 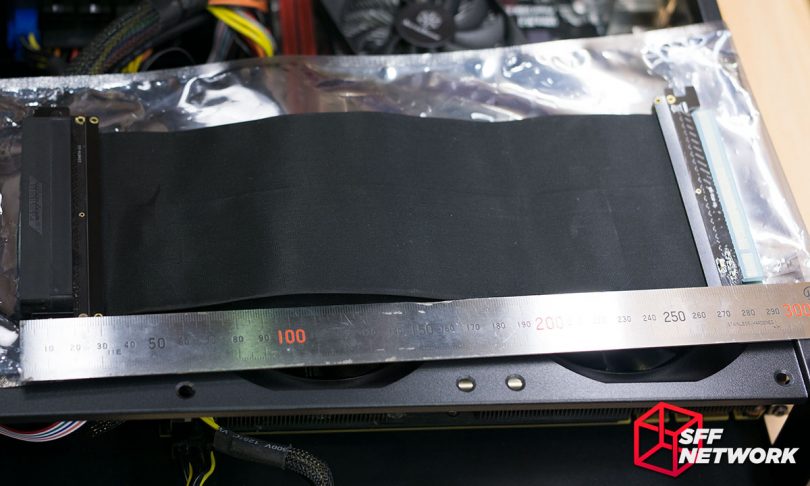 Overall length is around 290mm, the cable itself is about 240mm. 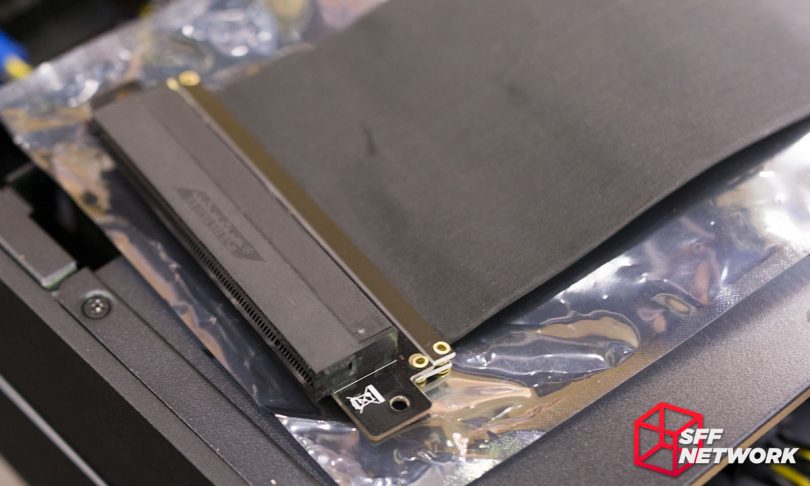 The PCIe slot is parallel to the PCB, so it is very solidly attached. The ribbon is also secured to the PCB with extra reinforcement, making for what appears to be a very sturdy package.

Tony Ou, the marketing manager at SilverStone, also mentioned that an issue one of their system integrator customers ran into with a different PCIe extender is while the system would be stable when loaded for several hours at a time, leaving the system under load for a day or more would eventually cause display errors. Tony said developing a PCIe extender has proven difficult because every time they tweak the extender, they have to extensively test many different scenarios for long periods of time to check if it is truly stable or not.

He didn’t give an exact price, but it would definitely be cheaper than the 3M extenders. Release date should be later this year, possibly in Q3 if everything goes smoothly.