Larry from HDPLEX is in Vegas attending CES and Drew, our man on the ground covering the show, was able to catch up with him and get some updates on the upcoming AC-DC and DC-ATX units. For those unaware of the company, HDPLEX develops a line of fanless cases plus the cooling and power solutions to make them feasible, along with accessories like an ultra-flexible PCIe extender. 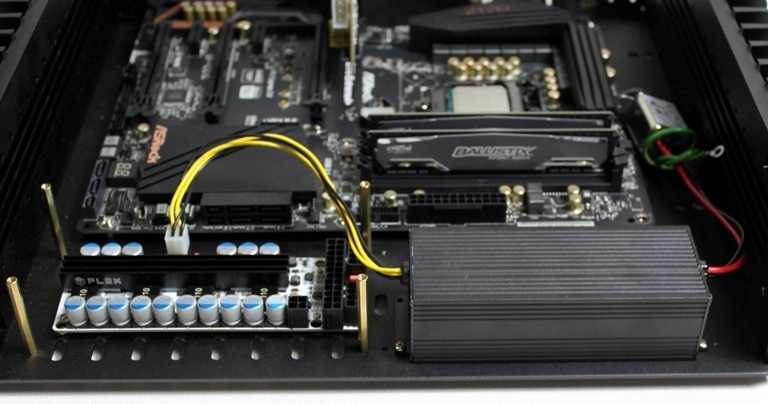 The “NanoATX” power supply line consists of internal AC-DC adapters (that take AC in and output 19V DC) and DC-ATX units that take 16-24V DC input and convert it to the various voltages and connectors need to power a motherboard, drives, and even a video card. The 160W AC-DC and 250W DC-ATX units are pictured above installed in the HDPLEX H5 fanless chassis as an example. The 250W DC-ATX in particular has become popular for powering gaming rigs in the NFC Systems S4 Mini case.

And for those who are aware of the company but haven’t been keeping up with the development of these new units, there are three new products from HDPLEX that are either out now or will be released within the next several months.

Other than the slight bump in rated wattage due to the inclusion of beefier components, the main improvement over the previous version is the connector layout has been changed for cases where the DC-ATX is parallel to the front edge of the motherboard, like the S4 Mini. On the 250W, the motherboard connector was at the end of the unit, so with that kind of case layout the 24-pin would have to be awkwardly twisted to route to the motherboard.

With the 300W DC-ATX, the 24-pin connector is now parallel to the motherboard’s connector, making cable management much easier.

Another nice improvement is the DC-IN connector has been upgraded from a 4-pin to a 6-pin for better current carrying capacity with the same gauge wire. And speaking of wires, the 24-pin has sleeved cables according to the product pictures on the website but each sleeved cable is the same color as it would be normally so it makes for a strange sight. The DC input cable is the same black and yellow wires as the other units, but the rest of the cables use just black wires. I’m not sure why the 24-pin is sleeved but not with black sleeving. 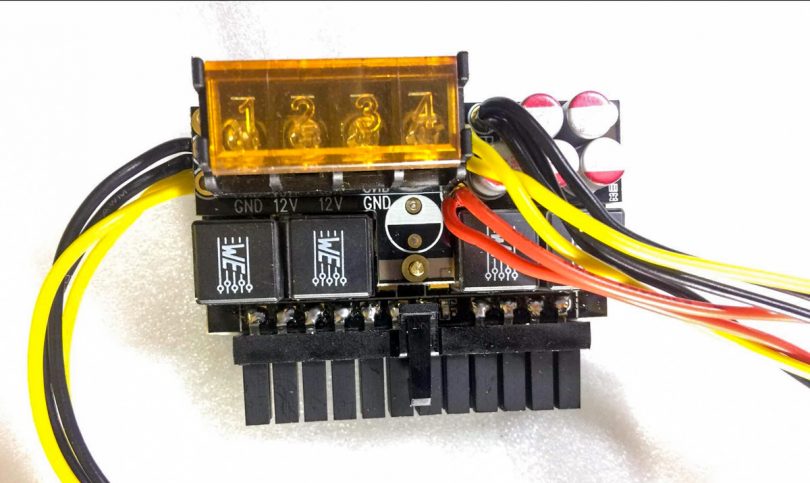 Next in line to release is the 160W DC-ATX direct-plug unit, which should be out within the next few weeks. This is a DC-ATX unit in the direct-plug form factor popularized by Mini-box with their picoPSU line, and I believe it will be replacing the current 160W DC-ATX unit.

It can take 16-24V input like the other HDPLEX DC-ATX units and while it’s labeled as a 160W, that is just to maintain consistency with the 160W AC-DC and should actually be capable of 200W. It can even do most of that wattage with just a pure 12V load too so this will make it suitable for powering just a video card, like in a custom eGPU dock for example. 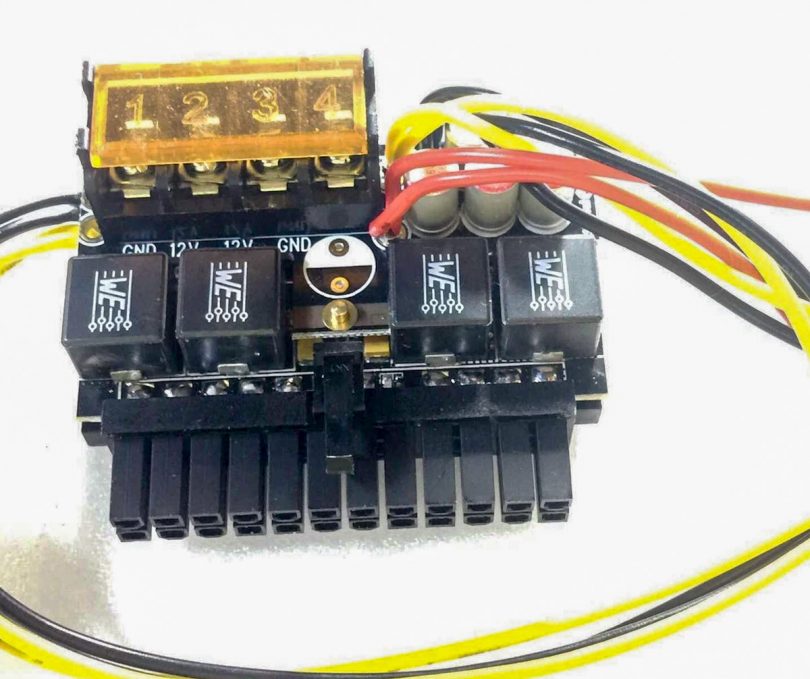 Cable strands consist of 1x 8-pin CPU, 3x SATA and 1x 4-pin Molex, and 1x 6+2-pin PCIe. The DC-IN and accessory strand is hardwired, while the CPU and PCIe strands use unusual (at least for PC power supplies) screw terminal connectors for a sort of modularity for custom projects. 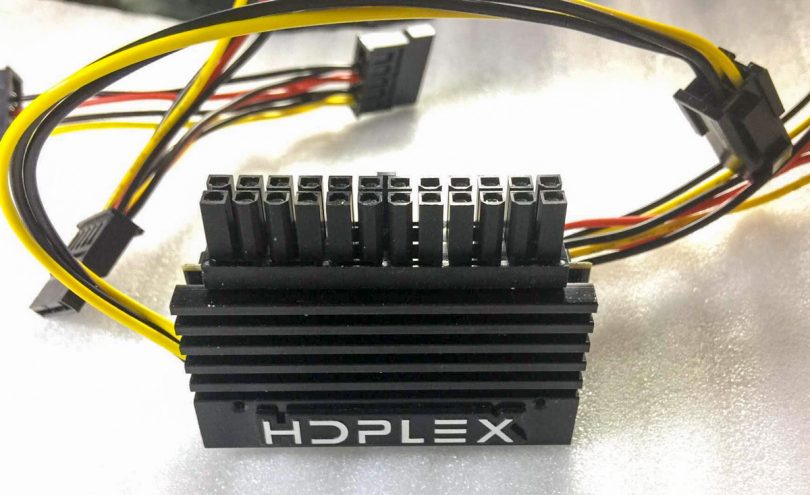 The back of the unit is covered by a black anodized aluminum heatsink for cooling. 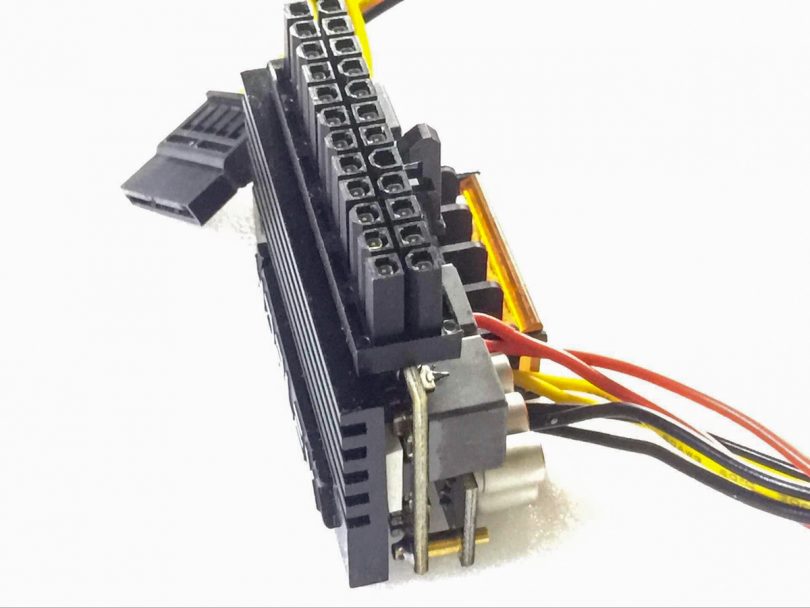 Beefy heatsink, semi-modular cables, and high-wattage for the forum factor comes at a cost though, the whole package is a bit thick compared to the original PicoPSU units.

Jan 7 Edit: Post updated with pictures of the production version of the 160W DC-ATX.
Jan 11 Edit: Price added with new information from HDPLEX.

The 300W AC-DC companion to the above 300W DC-ATX is the furthest out, with an expected release date of April to May. This was initially expected to release in the next month or two but the unit was delayed for thermal testing. The unit is 92% efficient but due to the higher wattage the original design ran too hot, so the unit was made wider to accommodate thick aluminum fins in the casing to cope with the extra waste heat.

This testing and design change took time though and now the factory will be shutting down in a few weeks for Chinese New Year (pretty much everything in China shuts down for the holiday) so the release date has been pushed back. 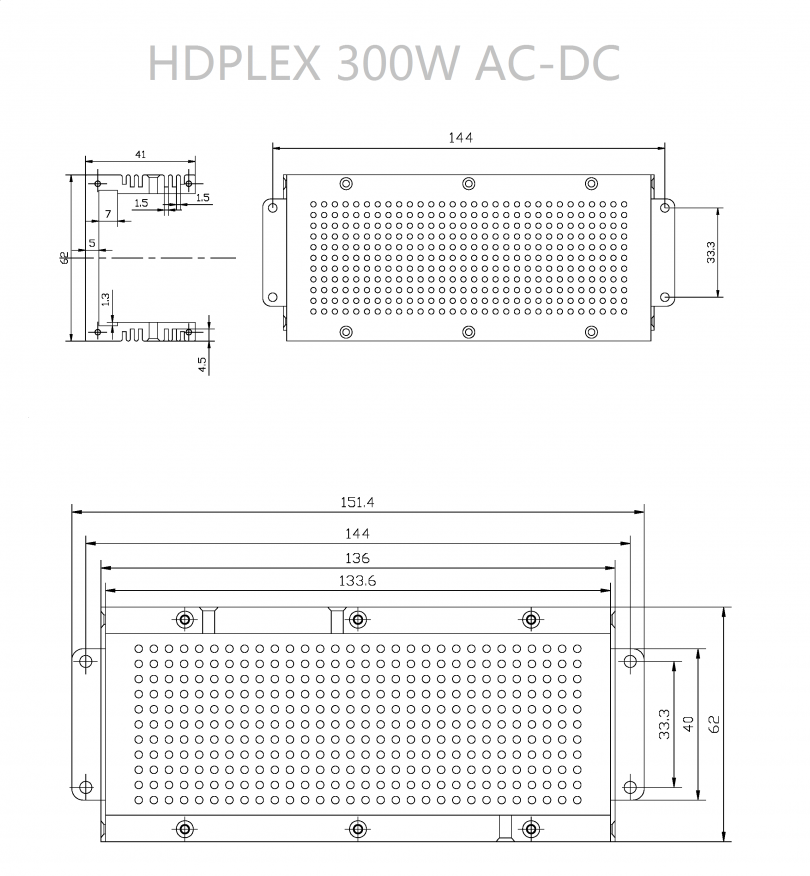 The dimensions for the body of the unit itself (ignoring the mounting ears) is 136mm x 62mm x 41mm, for a volume of 0.35 liters. So combined with the matching DC-ATX, that’s only a volume of 0.55L (ignoring cables) for 300W of power. Pretty impressive since that is sufficient for a mid-range gaming computer considering the efficiency of modern CPUs and GPUs.

Big thanks to Larry for taking time to meet up with Drew! I expect to get review units of these new designs as they release so we’ll see if they’re actually as good as they look on paper.