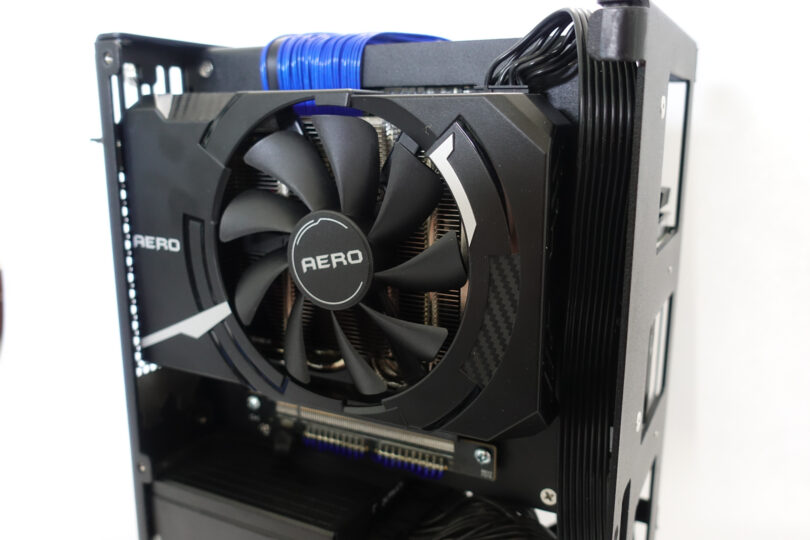 If you've been following our coverage of the MSI RTX 3060 Ti then you know that one of the few issues we had was that the single axial fan could get pretty loud when at full load. While gaming,the fan was spinning at about 2700RPM or over 80% of it's max performance. This resulted in a 13dBA rise over ambient, and a temps in the 78C to 80C range. The question then is what can we do about the noise, and is there any room to overclock?

For these benchmarks we set up four scenarios.

The stock setup is just that; stock. The card manages itself entirely with no interference. This is how it was tested in the initial review. Typically, the card's core clock would fluctuate from the high 1600MHz range up to the high 1800s.

The undervolt test was designed to try to get the card to behave as quiet as possible, without loosing performance. In this case, a stable balance was of 1815MHz at 850mV was the sweet spot. The fan turned at roughly 1700 to 1800RPM on a manual fan curve.

For the overclock, the core voltage was left alone, but a simple +150 was entered into the core and +800 for the memory.

Finally, the undervolt while overclocking (aka OC/UV)required numerous test runs but eventually a stable 1935MHz at 915mV was achieved. Stock fan curve was used.

Our test setup was the same system we've been using: 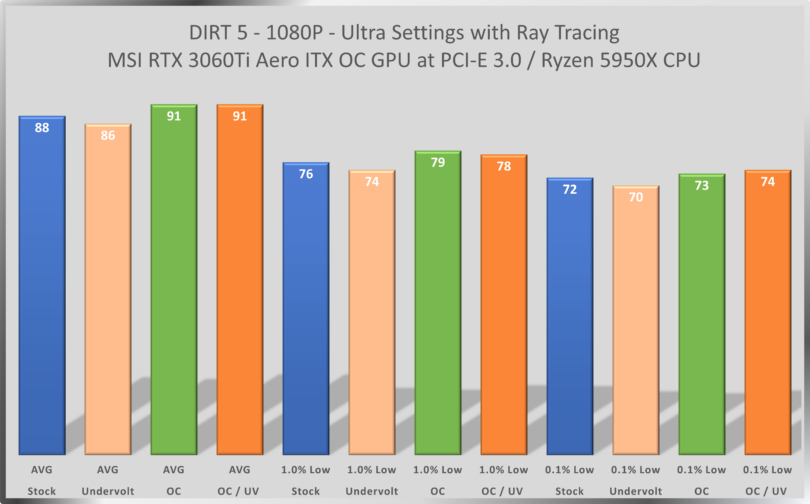 At 1080P there was a 3.35% improvement in the average frame rate for the OC and OC/UV settings, while seeing a 2.30% loss for just the undervolt. There was a better performance gain for the 1% lows moving from 76FPS to 79 FPS for the OC yielding a 3.87% improvement. The 0.1% lows saw a small improvement.

Between the undervolt and the OC there was a 5.65% difference in performance. 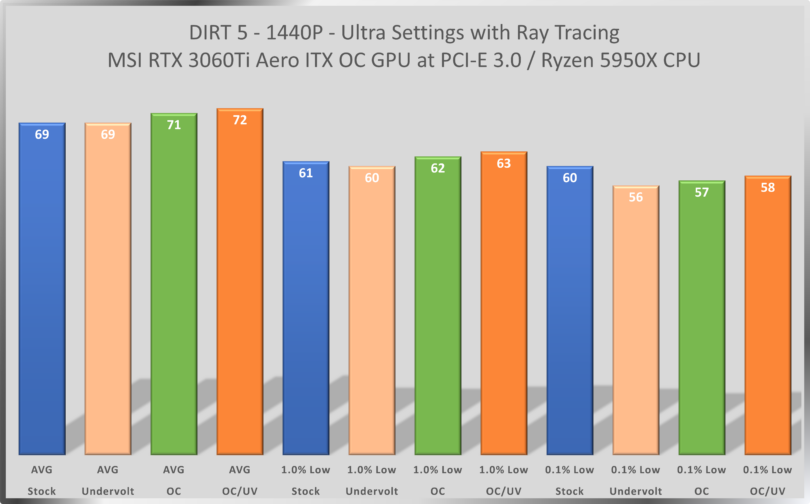 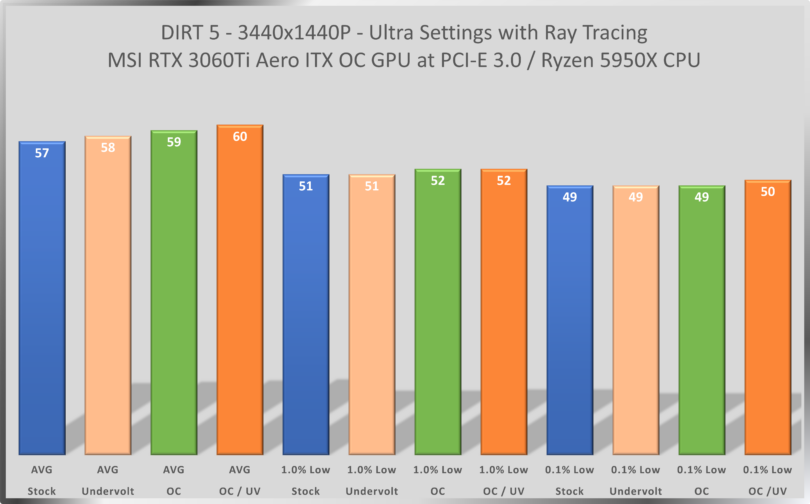 Moving to 3440 x 1440P Ultrawide, we see a consistent rise in performance above stock as we move from undervolting to OC/UV, with a 5.13% spread in performance. The 1% and 0.1% lows were one only a single FPS difference which is basically margin of error. 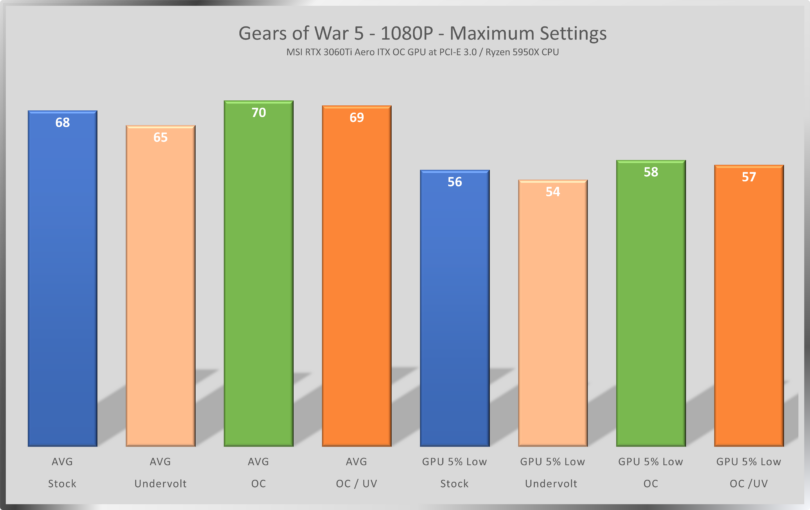 Gear of War 5 at 1080P saw the greatest rise in performance with the straight OC with a 2.9% improvement in average frame rates, and a 3.51% performance increase in 5% low performance. Conversely, the undervolt settings saw a loss of 4.51% in the average frame rate, and 3.64% in the 5% low when compared to stock. The difference between the OC and undervolt in average FPS was a large 7.41%. This translated to a difference was 70FPS for the OC and 65FPS for the undervolt. 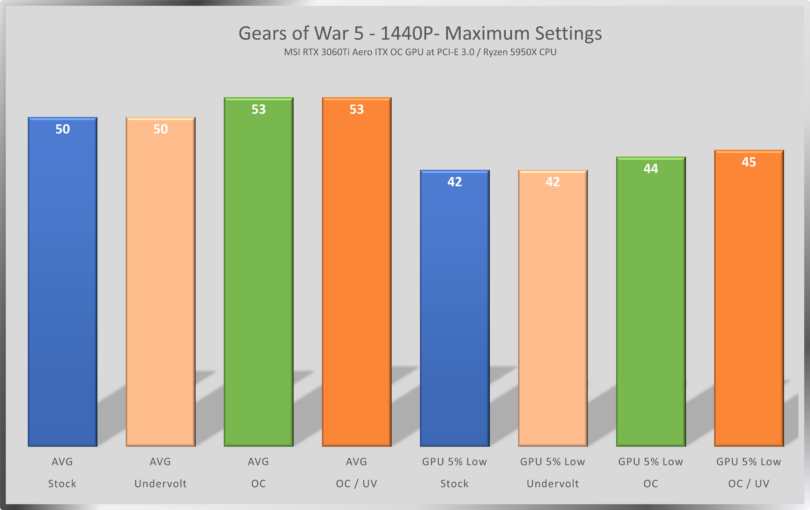 At 1440P, the average frame rate rises from 50 to 53FPS when comparing stock to OC and OC/UV, for a 5.83% improvement in performance. 5% Low numbers echoed this. Undervolt scored identically to stock. 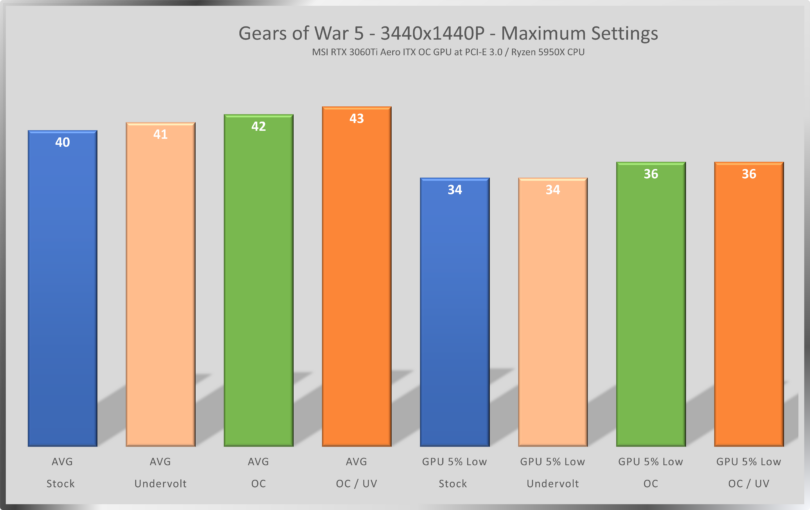 Note: Due to the way Fraps records framerate, the 1% low and 0.1% low will be identical. 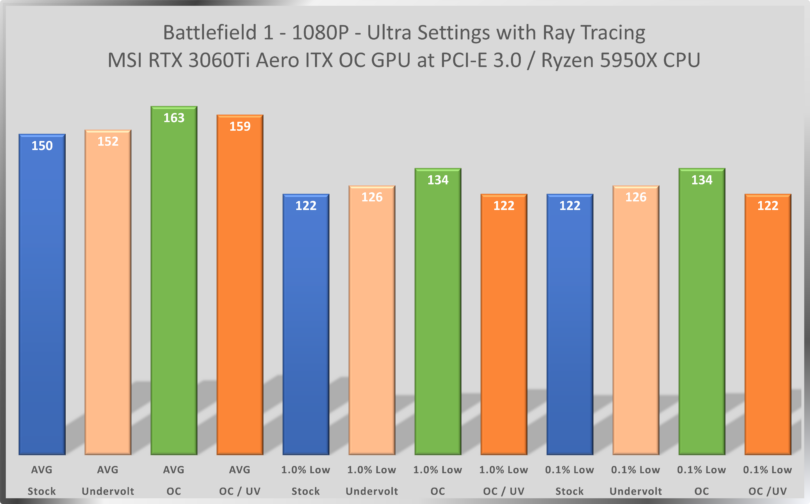 Battlefield 1 at 1080P saw a strong 8.31% increase in average frame rates between stock and OC, and a 9.38% improvement in the 1% low. The undervolt performed on par with the stock settings. 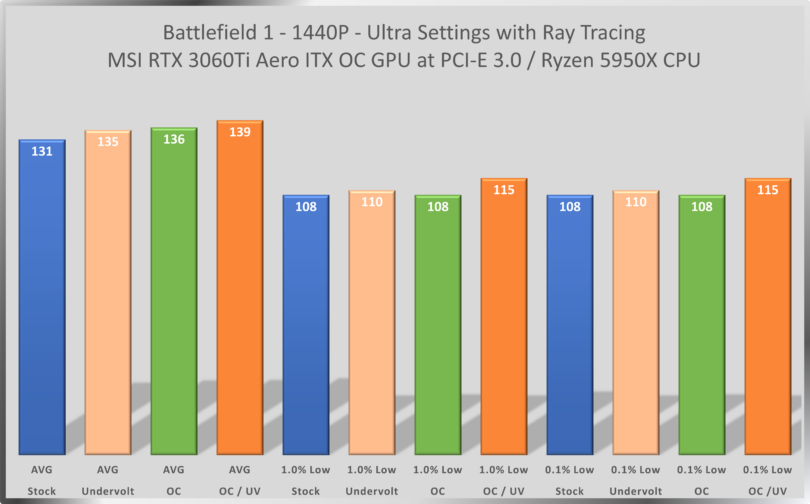 At 1440P there was a reduced improvement vs 1080P. There was a 5.93% improvement between stock and OC/UV settings, while undervolt and OC performed almost identically to each other. 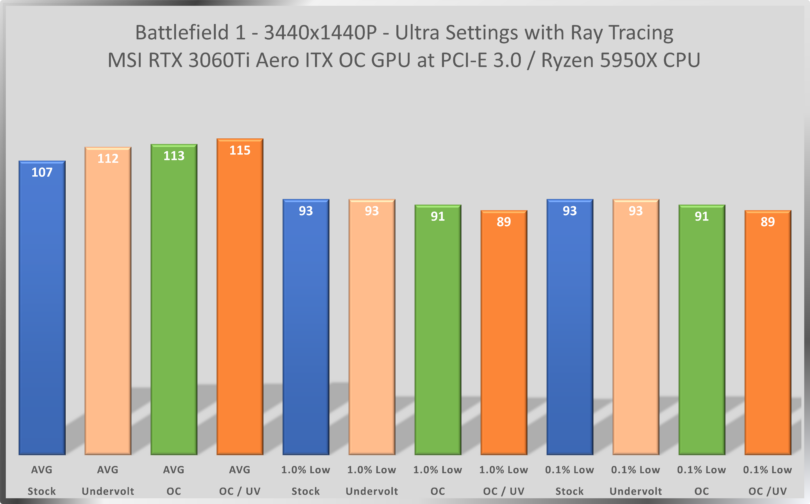 At 3440x1440P Ultrawide, we again see the OC/UV leading the charge with a 7.21% improvement in performance over stock average framerates, but a degredations of 1% lows by 4.4%. The degradation appears to be similar to Dirt 5 at 1440P.

At this point, we have established a pattern. The Aero 3060 Ti can overclock and get a decent uplift of 4 to 8% depending on the game. Conversely, focusing on undervolting to get a quiet card leaves the performance sometimes slightly above and sometimes slightly below stock. Undervolting while Overclocking can yield better results than an OC by itself, but can also effect minimum frame rates depending on the game.

The big winner for noise is the undervolt. The stock and OC settings saw a 13dBA rise over ambient. The undervolt measured at just 6dBA over ambient. Given, I don't have the quietest noise floor to test with, but the perceived sound difference was substantial and very noticeable. The Aero 3060 Ti's fan turned in the 1700RPM range with the undervolt, while it screamed upward of 2700 RPM for the stock and OC settings. Moreover, while the stock card would rise to 78C on average, the undervolt ran a cool 74 to 75C in my testing. The OC pushed upward of 80C.

The undervolt with overclock should be the best of both worlds then, right? Not exactly.

While the OC/UV did produce lower noise and fan speed, it didn't lower it by much. Moreover, while the fan did spin at 2500RPM instead of 2700RPM, it was still higher pitched and far more noticeable.

My biggest concern during the initial review was that the Aero 3060 Ti was loud. The undervolt substantially reduced the noise from the card, while also still giving + or - 3% of the stock performance. In my book, that's the best bang for the buck as I can hear the OC and and UV/OC through my closed-back headset.

If speed is your only concern, I would suggest the set-and-forget OC over the OC/UV. While the OC/UV has the potential to be faster, cooler, and quieter, the difference isn't that large on any of those fronts. Moreover, it will take a substantial amount of time to find the perfect balance of power, clock speed, and fan RPM. If you enjoy squeezing every last drop of potential out of your hardware though, go for it.

What I don't suggest is leaving the card stock. It's just as loud at OC as it is at stock so there is no loss there. Plus you get improved performance.

However, that's just my opinion. What do you think? We're all hardware enthusiasts and want to have a great and helpful community. Drop by our forums or Discord to chat with our members and staff, even if you don't own a small form factor PC.

having played around some time now with my DIY 3060Ti ITX, I am wondering why the Aero gets so hot / loud at stock settings despite having one more heatpipe compared to mine. Does it pull more than 200W under load or do you think there could be something wrong with the TIM on your card?
Reactions: Revenant

having played around some time now with my DIY 3060Ti ITX, I am wondering why the Aero gets so hot / loud at stock settings despite having one more heatpipe compared to mine. Does it pull more than 200W under load or do you think there could be something wrong with the TIM on your card?
Click to expand...

I think the TIM is fine or it would be throttling. My guess is that the extra heat pipe might not matter much. I believe it was Dan who discovered in the Blackridge design phase that more didn’t equal better for heat pipes…at least not always. As for the fan, it’s a different design than the older Aero cards which might account for some of the noise and heat as well.
Reactions: REVOCCASES

Great review, very interesting results! Did you happen to check the power draw with the UV? I'm curious as to what kind of reduction we're looking at, given the significant drop in both noise and thermals.

Valantar said:
Great review, very interesting results! Did you happen to check the power draw with the UV? I'm curious as to what kind of reduction we're looking at, given the significant drop in both noise and thermals.
Click to expand...

Power draw was dropped pretty substantially. It typically hovers in the 160 watt range but can spike a bit to 170ish. Standard power draw is 200 give or take a few watts.
Reactions: Valantar and rfarmer

Resizable BAR at PCIe 3.0 With a Mid-Range GPU Benchmark