My goal was to build a small form-factor server that was also quiet with relatively low-power consumption. It would be used to run VMs for a home lab.

I'd been lusting over the Lone Industries L5 case for a while, and this little project gave me a reason to order one. The case is very well-made, and I am impressed by the attention to detail, like the counter-sunk screws and the removable front fan mount.

For the motherboard, I selected the ASRock Rack EPYC3251D4I-2T, which has an AMD EPYC Embedded 3251 processor, and is passively cooled. It has 8 cores, 16 threads, as well as two 10 Gigabit network interfaces. Even though this board is passively cooled, it does depend on good airflow to manage the heat, and for that I opted for two 80mm Noctua NF-A8 PWM chromax.Black.swap case fans. Even when the fans ramp up to 1200 RPM, the noise is barely noticeable.

I initially installed two Samsung 64GB DDR4-2666 ECC LRDIMMs for a total of 128GB RAM, but unfortunately the system would not boot with them, despite ASRock Rack support saying that they "should" be compatible. So in the meantime I have installed a Crucial 32GB DDR4-2666 ECC RDIMM.

To power the system, I am using a Meanwell GST220A12 power brick, which is about a quarter of the size of the system. It is rated at 180W / 12V. I am not using anything like a picoPSU or HDPLEX, because this board can be powered directly by a 12V EPS connector. With Thehack's kind advice, I managed to wire up a 4pin EPS connector up to a Kycon KPJX-PM-4S-S jack, which is mounted on the L5 case.

Storage is currently supplied by two SATA SSDs - a Corsair Neutron XTi 1.92TB, and a Micron 5210 ION 7.68TB, giving me a total of just under 10TB of raw solid state storage. I wanted capacity over performance here, which is why I didn't go for NVMe. Plus I think NVMe would generate more heat over SATA drives.

For graphics? Well, I'm not doing any gaming here, or doing anything like machine learning, so I don't have GPU. The board has a VGA port, but I don't even have a screen that can support VGA anymore. Luckily there is IPMI with this board, so I can access the console directly over the network through a web browser. For everything else, Remote Desktop or SSH is the way to go. This system is made to run headless.

I only need two cables connected at the back of the system - power and the network. For convenience, I can also plug in another network cable for the IPMI/management interface.

Overall I'm pretty happy with the setup. It's a very quiet system, and compact enough to fit in a backpack. And although I haven't measured the power consumption, the EPYC processor is rated with a TDP of 50W, yet has enough cores and power to meet my needs.

Nice slick setup. You're giving me bad ideas, like how to make my own & spend some money ?

OK, I figured out how to embed the gallery:

Reactions: dealda, Stevo_, maped and 5 others

Thanks for posting your build! It's nice to see a server build.
Reactions: chn

sancho said:
I also collected something similar, but it turned out thinner 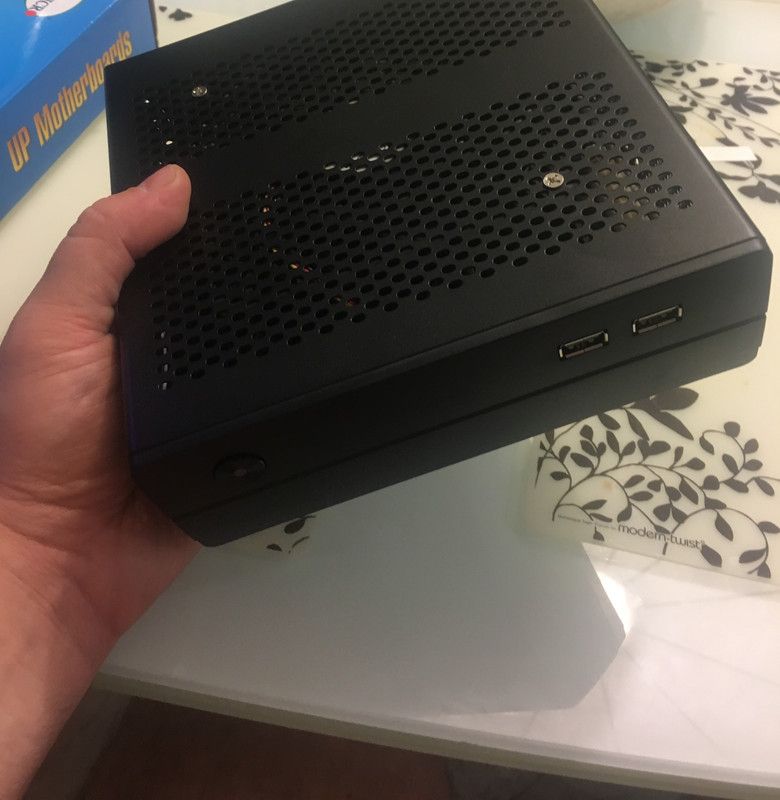 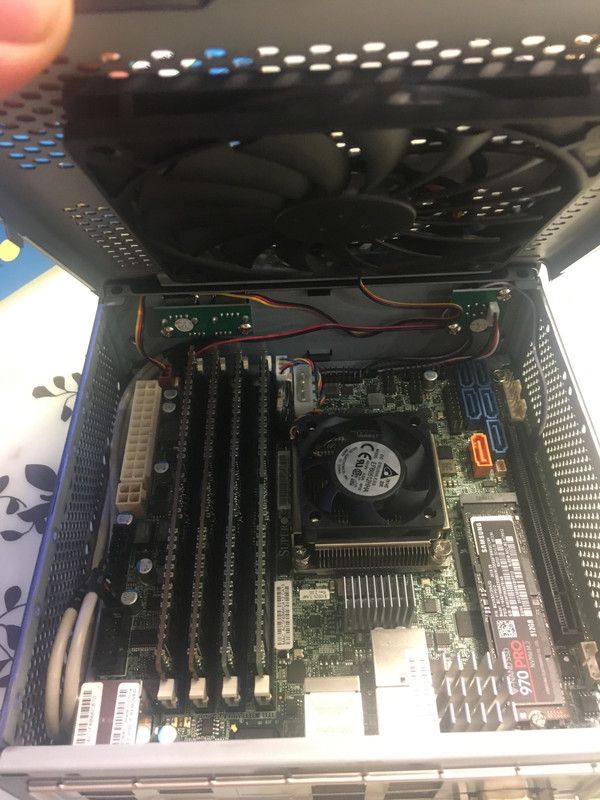 Is that the Supermicro M11SDV series you have there?

Gorgeous build, though I shiver at the thought of its budget.

Have you considered integrating a PSU in the top of the case? Looks like there should be plenty of room above the RAM and CPU heatsinks (or even more around the expansion slots), and plenty of airflow, so something like an MW RPS-200-12C should fit nicely inside for a fully enclosed unit. Unless my eyeball measurements are way off, that is.

Valantar said:
Gorgeous build, though I shiver at the thought of its budget.

Have you considered integrating a PSU in the top of the case? Looks like there should be plenty of room above the RAM and CPU heatsinks (or even more around the expansion slots), and plenty of airflow, so something like an MW RPS-200-12C should fit nicely inside for a fully enclosed unit. Unless my eyeball measurements are way off, that is.
Click to expand...

I actually never knew the heatsink sat so low until I got it, and by then I'd already planned on using the Meanwell brick, which I had.
Reactions: Valantar

Nice build! Are you using for VMs, or something different?