I’ve finally got my hands on the Gigabyte GA-H67N-USB3-B3 mini-ITX motherboard after many months of waiting (thanks Aurora) and I know a lot of ITX enthusiasts have high expectations for this board. I know I do, especially given the success of its predecessor, the GA-H55N-USB3, which proved to be a stable platform and provided excellent overclocking abilities. We all know that Intel has hamstrung the overclocking on the H67 chipsets, but I’m still hoping that Gigabyte can offer up a product that can satisfy the wants of the mini-ITX gaming crowd.

Packaging is an important part of any marketing plan and if a product’s success or failure was dependant solely on the artwork adorning said packaging, I’d probably have to rule the Gigabyte GA-H67N-USB3-B3 as the hands down Sandy Bridge mini-ITX winner. It’s bright and colourful and boldly advertises all of the features that Gigabyte feels should be important to consumers.

A sizeable chunk of the real estate on the front of the box is occupied with a large graphic professing ‘NEW 6 Series Motherboard B3 Stepping’. Clearly the manufacturers want to make sure we all understand that we’re buying updated boards that do not suffer from the SATA issues that affected the first Cougar Point chipsets.

Opening the box reveals the GA-H67N-USB3-B3 in the standard silver anti-static bag. Removing the motherboard shows the few other accessories including two manuals, a driver disk, two SATA cables and an I/O backplate. Sorry folks, no 3D glasses in this one.

Removing the H67N-USB3 from its anti-static bag reveals a few standout features. First is the large heatsink on the H67 chipset. It’s almost twice the size of the heatsinks on other H67 mini-ITX boards. The other feature, or lack thereof depending on your point of view, is the lack of a DVI port. Instead, Gigabyte has opted to include a second HDMI port in addition to the VGA connector.

While dual HDMI may be preferable to some, it was an inconvenience in the case of my setup. I generally use DVI to connect to my doesn’t support 1:1 pixel mapping over HDMI. Fortunately, the situation is easily remedied by the Radeon HD 6850 that I have waiting to plug into the PCI Express slot.

If you’re planning on running only with the integrated graphics, just make sure that you don’t need a DVI port.

Installing the Gigabyte GA-H67N-USB3-B3 onto my Lian-Li PC-Q06 was uneventful, at least as far as the motherboard is concerned. I am starting to question the quality of this particular computer case though, as I am continually having issues with parts of this case (mostly the small nuts that are welded to the case that the mounting screws thread into) snapping off.

As with most other mini-ITX motherboards, the Gigabyte model does not leave a whole lot of extra room between the stock heatsink and the PCI Express 2.0 slot. In this situation, it measures 50mm from the center of the socket to the edge of the PCIe slot. For those keeping count, that’s 1mm more than offered on the ASRock H67-ITX and 4mm less than what’s found on the Intel DH67CF.

After spending time with the ASRock H67-ITX and it UEFI interface, it felt like a bit of a step backwards to boot up the GA-H67N-USB3-B3 and hit the Delete key to see the same old blue BIOS screen. Of course, the initial impression faded quickly when I noticed the first menu option was for the Motherboard Intelligent Tweaker (M.I.T.).

The M.I.T. offers a detailed overview of the system status and allows basic changes to the hardware configuration. Once again, overclocking is non-existent, but the Gigabyte has seen to offer one feature that I have not yet encountered on an H67-based motherboard. You can adjust the CPU Vcore from 0.750v up to 1.795v in 0.005v increments. I mention this only as many readers have inquired if the vcore can be adjusted on other H67-based boards. If tweaking the voltage on your CPU is a must have feature for you, then the GA-H67N-USB3-B3 is your board.

The remainder of the options in the M.I.T. allow changes to the memory timings and voltage as well as adjustments to the internal graphics core. Both of which are features available on other H67 boards that I have used.

I skipped the World of Warcraft benchmarks on this one as the results were exactly the same as the previous DH67CF and the H67-ITX. Also, considering the graphics are CPU dependant, you results will vary. Just for sake of consideration, and because I use it my power draw comparison, I ran a 3DMark06 benchmark and the results are below. As you can see, there’s no significant difference in the GA-H67N-USB3-B3. It landed right between the two previous motherboards. 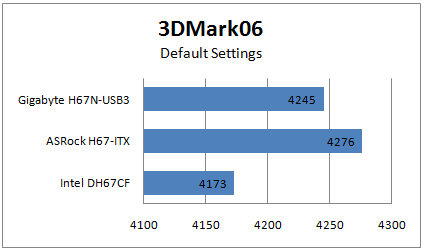 The GA-H67N-USB3-B3 shows the highest power draw among the H67 boards that I’ve reviewed, but the results only vary slightly. The Gigabyte consumes 2-3 watts more during idle and the video and 3DMark06 tests. It actually uses the least amount of power during the CPU intensive Prime95 benchmark and runs even with the H67-ITX in the combined CPU/GPU test. Overall, none of the board’s I’ve tested show any clear advantage where power consumption is concerned. 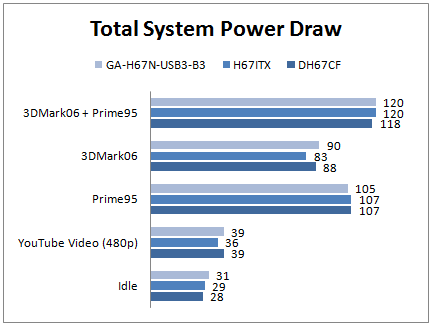 Again, the GA-H67N-USB3-B3 is in the middle of the road as far as temperatures go. With the same ambient temperature of 20 degrees that I used for the other boards, the Gigabyte runs at a stable 29 degrees at idle, only one degree more than the ASRock H67-ITX and a full six degrees cooler than the Intel. However, like the H67-ITX, the Gigabyte can’t match the full load temperatures of the Intel DH67CF. Under load the GA-H67N-USB3 registers an even 70 degrees, seven degrees hotter than the Intel, but four degrees cooler than the H67-ITX. 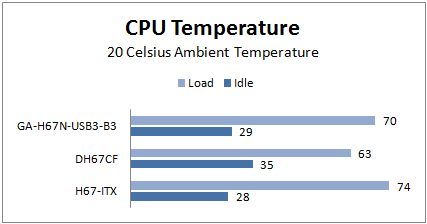 I’ll be honest, considering the accomplishments of it’s predecessor, I was hoping to find that the Gigabyte GA-H67N-USB3-B3 was a cut above the field. It does seem like Gigabyte managed to squeeze a bit more out of the seriously limited H67 chipset but there’s just not enough flexibility there for any manufacturer to offer a product that absolutely outshines the competition. That being said, Gigabyte’s reputation for quality products and the good price point of the GA-H67N-USB3 will no doubt ensure that it finds a home inside many mini-ITX gaming systems.

I don’t like: The lack of a DVI port.

Final thought: This board will find it’s way into the lions share of high-end mini-ITX systems.