Sometimes, it is iterative improvement that really makes the difference – no flash in the pan concepts, just solid, tested performance. It is with this that Noctua recently released two ‘new’ coolers – the NH-L9a-AM4 and the NH-L12s. These monikers may seem somewhat familiar, which is no surprise, as these are the aforementioned iterative improvements over the previous generation.

AMD’s Ryzen platform has caused a significant sea change in the world of personal computers, with many manufacturers releasing adapter kits for their existing products. Noctua has gone one better and released a trifecta of AM4 specific coolers (albeit variants of their existing products). Today we are looking at the smallest of the bunch, the NH-L9a-AM4.

Another recent development has been Noctua’s first slim 120mm fan, a long sought after product within our community. Along with this fan, there were murmurs of a cooler that would use this fan specifically. The NH-L12s is this cooler, and is also being tested today! 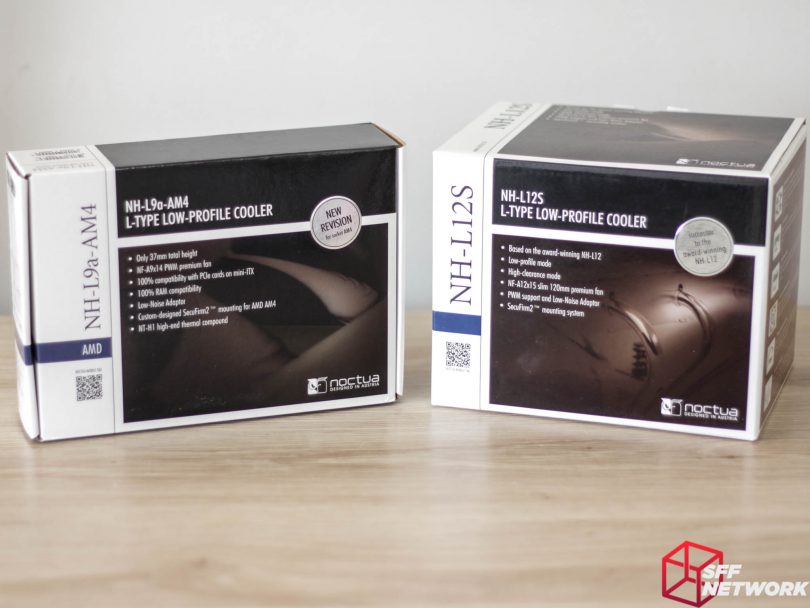 Sticking with their design language is something Noctua is known for, and this extends to the packaging. 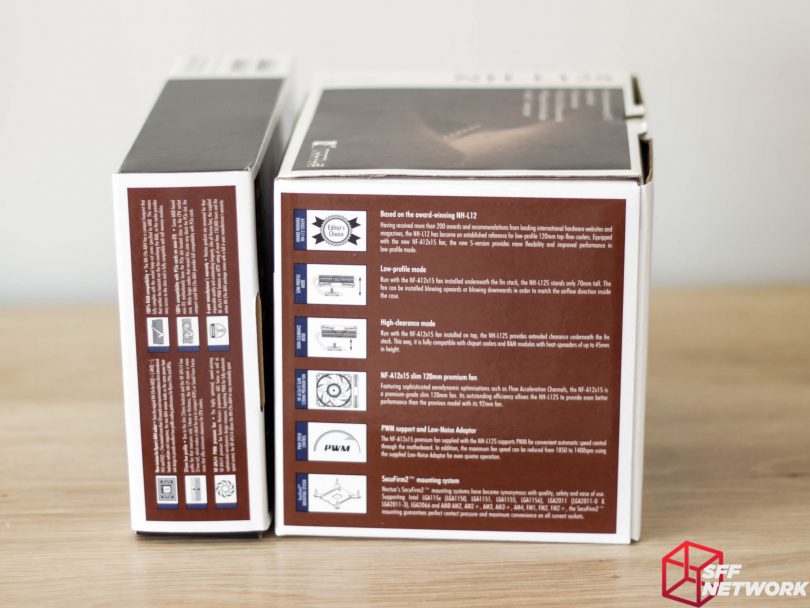 Just how we like it, as much information as possible is crammed onto the NH-L9a-AM4’s box! 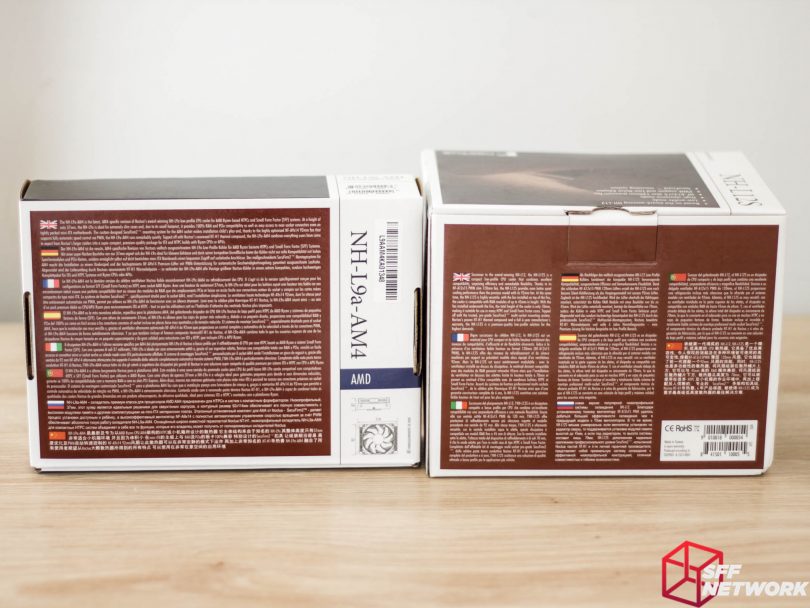 The box size difference between today’s tested coolers is significant, but these are still both SFF friendly CPU coolers.

The Noctua NH-L9a-AM4 is an ultra low-profile cooler, designed for the smallest of builds. At 37mm high, this little powerhouse is designed for CPUs/APUs up to 95 watts, something we will be sure to test today. Built within the AM4 keepout zone, Noctua promises 100% compatibility with AM4 motherboards.

The specifications for the NH-L9a-AM4 is available on Noctua’s product page, however we have reproduced them below for your convenience.

With the specifics out of the way, let’s get onto the cooler itself! 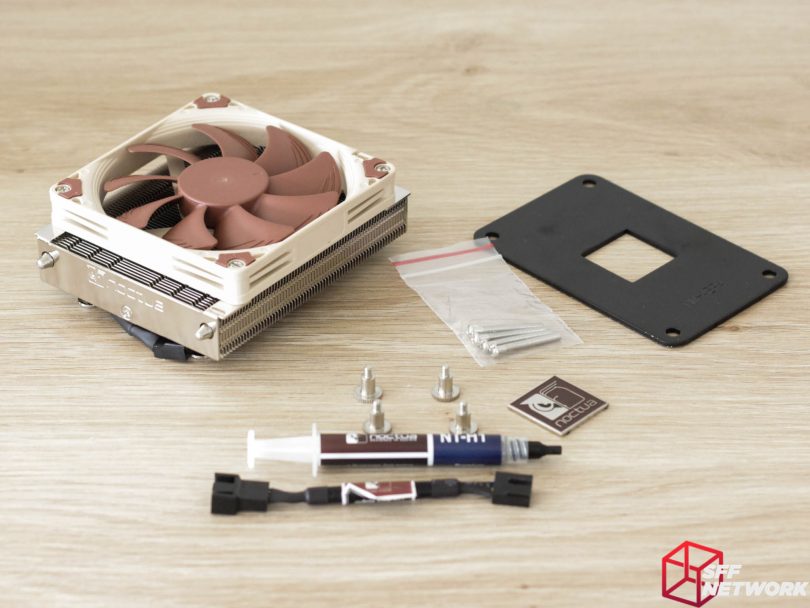 When we reviewed the original NH-L9a two years ago, we remarked on the quality of the packaging, as well as the selection of included accessories. The same applies here, with the same accessories, albeit with an AM4 twist, included. 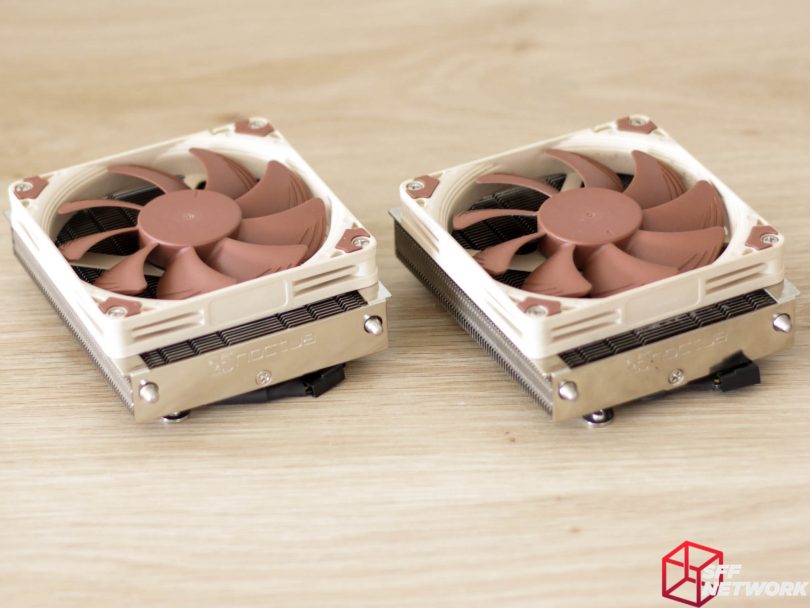 Spot the difference? The new NH-L9a-AM4 sits next to it’s older sibling, the NH-L9a. Figured out which one is which? 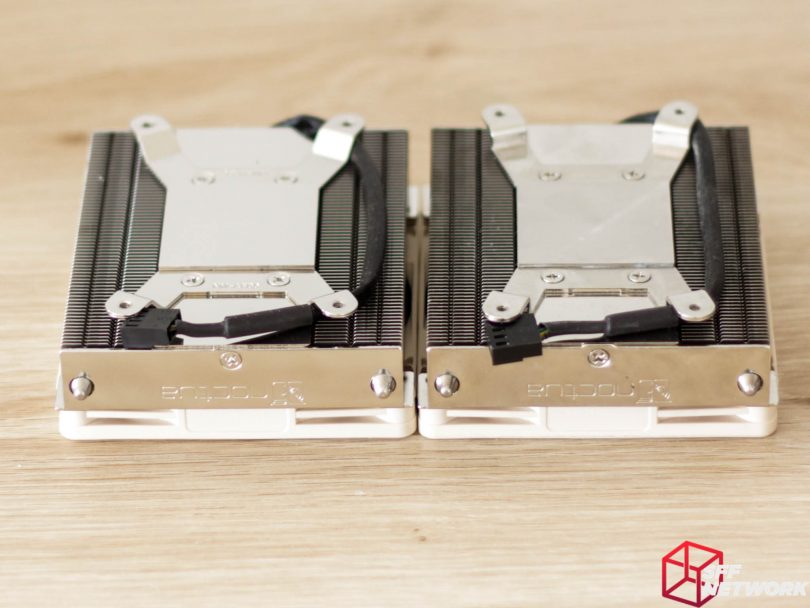 Yup, the AM4 variant is to the left, as in this image. Noctua has stuck with the proven design, and has simply updated the mounting solution to suit the new AMD Ryzen platform.

Replacing the NH-L12, (instead of being sold alongside like the NH-L9a-AM4 above) the NH-L12s takes advantage of the new slim 120mm fan that Noctua recently released. The cooler uses this fan instead of the 25mm thick 90mm fan of the original product. 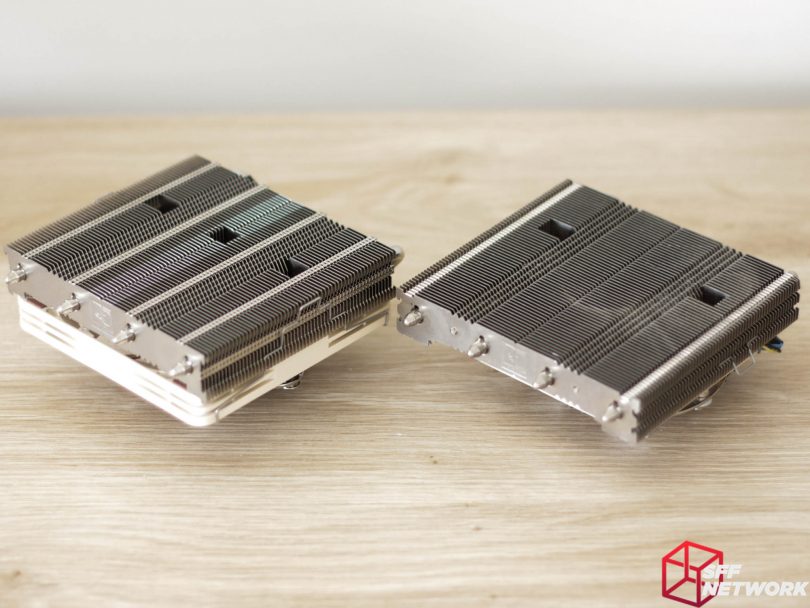 Unlike the NH-L9a-AM4 above, the NH-L12s is more than just a replacement product with a different mounting system, it’s a redesigned cooler. Of note here is the differing fin profile compared to the original NH-L12 to the right. Also noticeable is the extra hole – this is for the different mounting mechanism, which is mounted to the top of the baseplate, rather than the bottom like the older NH-L12. 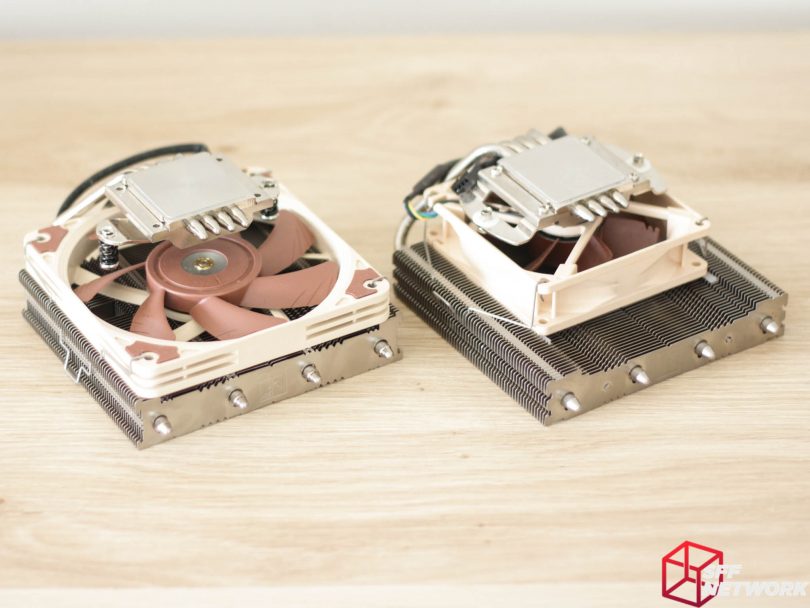 This revised mounting mechanism is more apparent from the bottom, with the new NH-L12s to the left in this image.

To test the coolers, I mounted them to my Ryzen board of choice – the Gigabyte AB350N Gaming-WiFi. Under the cooler, I am running a Ryzen 5 1600X 6 core processor, rated at a modest 95w TDP. Ancillary to this is 16GB of DDR4, and a GT210 GPU. Once booted, I load up Gigabyte’s Easytune. This gives me accurate temperature results, calibrated by Gigabyte for this platform. Using this configuration, I let the system hit an average idle temperature. Once this is stable, I start Prime95 Blend, and let the system heatsoak and hit a steady maximum temperature. From this, I record the CPU and system temperatures. Because the temperatures recorded thus far are based on motherboard fan control settings, I then plug the fan(s) into pure 12v, maxing the fan speed. I then repeat the idle and load temperature testing.

To add some data points to this testing, I also dusted off our Noctua AM4 adapter kit, and adapted the previous generation NH-L12 to fit the Ryzen platform. Unfortunately the kit would not work on the NH-L9a we have, however Noctua does have a specific adapter kit for this, the NM-AM4-L9aL9i mounting kit. A bit of a mouthful for such a simple set! Also tested on the platform are the NH-D9L and NH-L9x65.

Well, here would normally lie a bunch of graphs comparing the coolers to other models, in various use cases. However, In this case, I feel there is no need for this. I tested, tested and tested and found no performance difference between the previous models that were larger than what I would consider a margin of error. Is this a bad thing? I would say no. In previous tests of the relative models, I found that each cooler family performed excellently, with amazing performance considering the lack of noise.

Numbers? Well, at load, the NH-L9a-AM4 reached a 35 degree delta over ambient during the fan control mode, and a 30 degree ambient under 12v mode. The NH-L12s however, managed a more impressive (although to be expected considering the size) 20 delta on fan control mode, and 14 degrees under 12V mode.

Noise? Impressive considering the fan speeds we’re talking about here. The 92mm fan on the NH-L9a-AM4 cranks up to a max of around 2500 RPM, with the larger 120 x 15mm fan on the L12s maxing out at 1850 RPM. I found no weird aural annoyances during testing, with both fans showing a better noise profile than any fans I’ve tested in their form factors.

As always, Noctua has not failed to impress us with build quality and performance. With these two coolers, they have continued to set the benchmark for a ‘premium’ small form factor CPU cooling solution. Apart from the “love it or hate it” fan colour scheme, the aesthetics are what we have come to expect from the brand, with simple, clean lines and no “fluff” or extraneous features.

Of course, this “premium” level of performance and aesthetics comes at a cost, namely US$49.90 for the NH-L12s on Amazon.com (and the same at Newegg) and US$39.90 for the NH-L9a-AM4 on Newegg.com at the time of writing.

Performance wise – well they perform as expected. Top of the class performance at low noise levels.

Thoughts? Grumpy at me for not including actual performance graphs (Sorry!)? Leave your comments in the forum here.