Noctua has been producing high-end fans since the company’s inception in 2005, and today we’ll be looking at – count’em – four of their products, which will form a basis of a standard testing kit for future cooler and chassis reviews. Today, we have on our review bench the NF-P12 PWM, NF-A9 PWM, NF-A8 PWM, and the tiny NF-A4x10 FLX.

These products all have high quality construction, some premium touches, and feature many of Noctua’s famed design and engineering features. So, let’s dive in!

Firstly, we will look at the NF-P12 PWM. This 120x25mm fan is Noctua’s ‘mainstay’ fan, with air and water cooling aficionados alike using them for their builds for a few years now. And its popularity is a direct consequence of various technologies developed by Noctua, including vortex-controlling notches, self-stabilizing bearings, and smooth commutation drive for quiet operation.

This particular model, the P12, is optimized for static pressure, making it useful for dense CPU coolers and radiators, and less so for case fans where sheer volume is more important. As with (nearly) all of Noctua’s fans, however, the unit is manufactured in dense plastic, using Noctua’s ‘Coffee and Cream’ color scheme – an infamously ‘love it or hate it’ design choice. 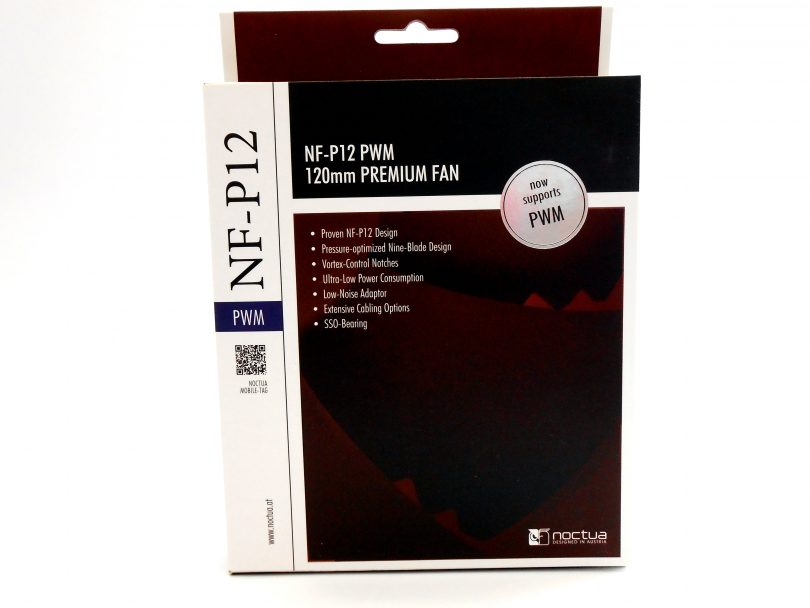 The box itself follows the current Noctua design – clear text, bold naming and a subtle image of the fan’s blades. The foil ‘now supports PWM’ sticker is the only divergence, a consequence of the fact that the PWM model appeared after the non-PWM variants. 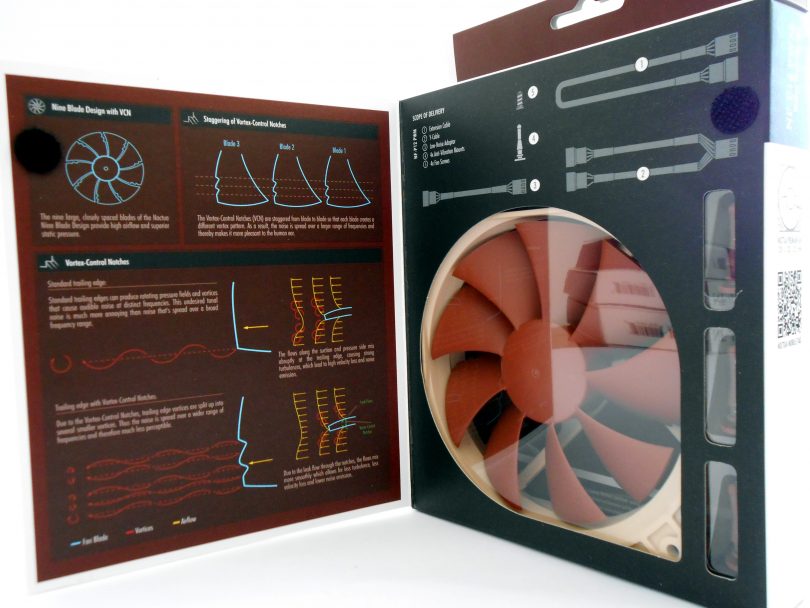 Opening the front panel of box, we are treated to some brilliant packaging. A clear window exposes the fan and some of the anti-vibration mounts. The cover of the box shows off some of the technology alluded to on the front of the box. And all the information presented is very easy to read, and cleanly illustrated, even if you don’t fully understand the physics behind the product. 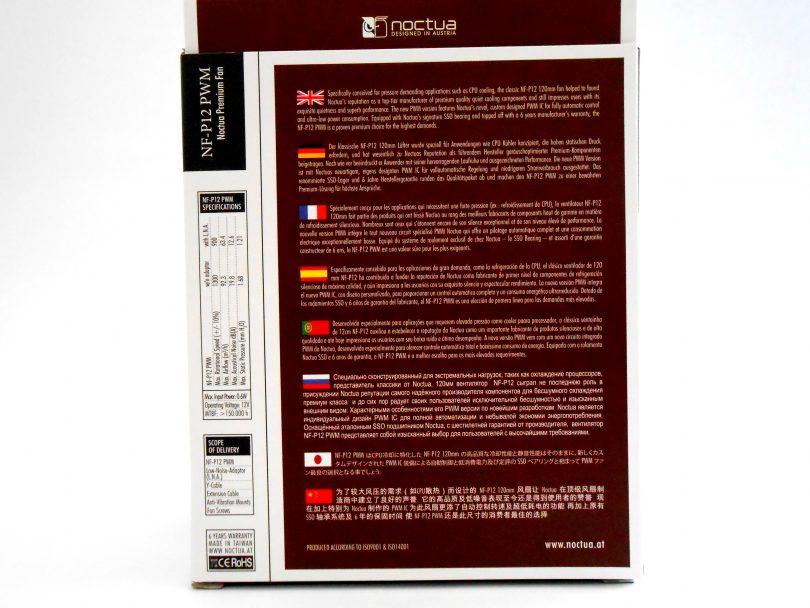 The rear of the box shows the usual marketing blurbs, in 8 different languages. A spec sheet and packing list is also seen, running along the left side. 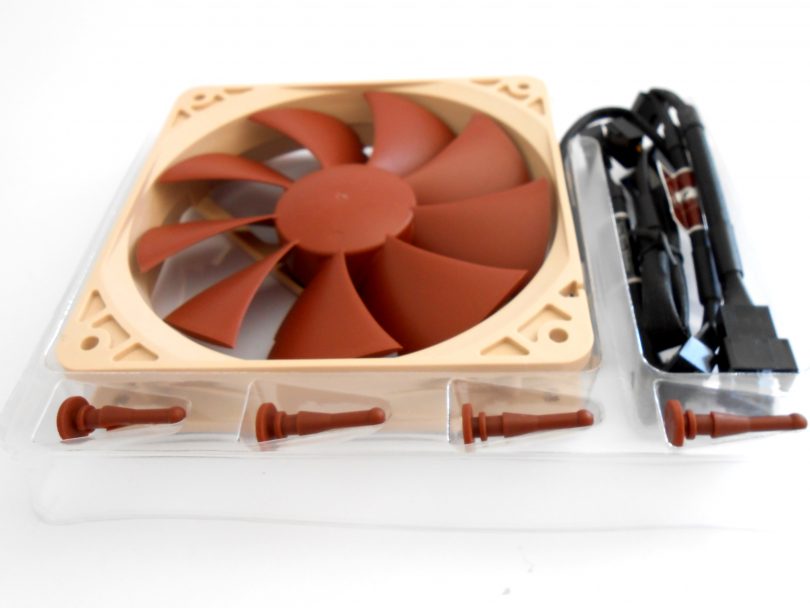 Pulling the plastic tray out of the box, we see well-spaced packaging showing off the included gear. The fan should survive any reasonable trip through your carrier of choice unscathed. 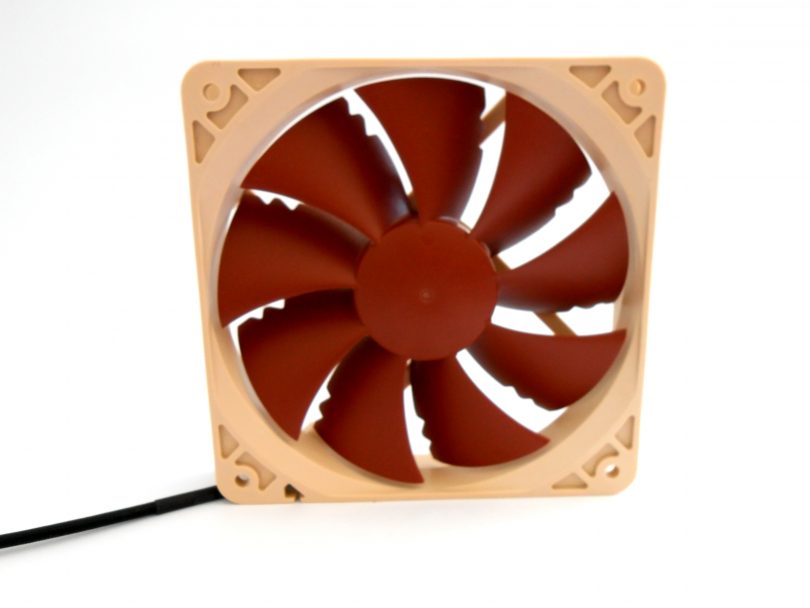 The ‘vortex-control notches’, comparatively, are quite visible, and greatly change the aesthetic of the fan. The technology behind these is actually quite interesting – Noctua claims that these notches break up the trailing edge vortices, thus spreading the sound signature over a wider and more comfortable, range.

To that end, the notches on each blade are actually not symmetrical, being located in slightly different spots on each blade, increasing the effect of this design. 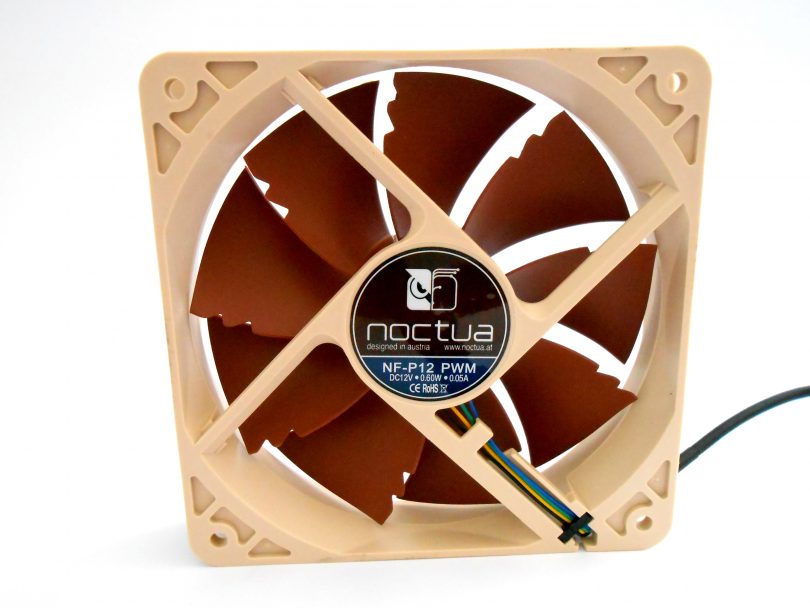 Looking at the back of the fan now, the basic specs of the fan and model number are printed on the bearing cap. Unfortunately, however, the colored PWM wires are clearly visible, and clash completely with the fan – I would have liked to see these sleeved as per the remainder of the cable.

Still, speaking of sleeves, the wires exiting the body of the fan are sleeved with silicone, which is a nice choice, and a much better material than the cheaper (and more translucent) sleeving on some cheaper fans. The cable is 20cm long. 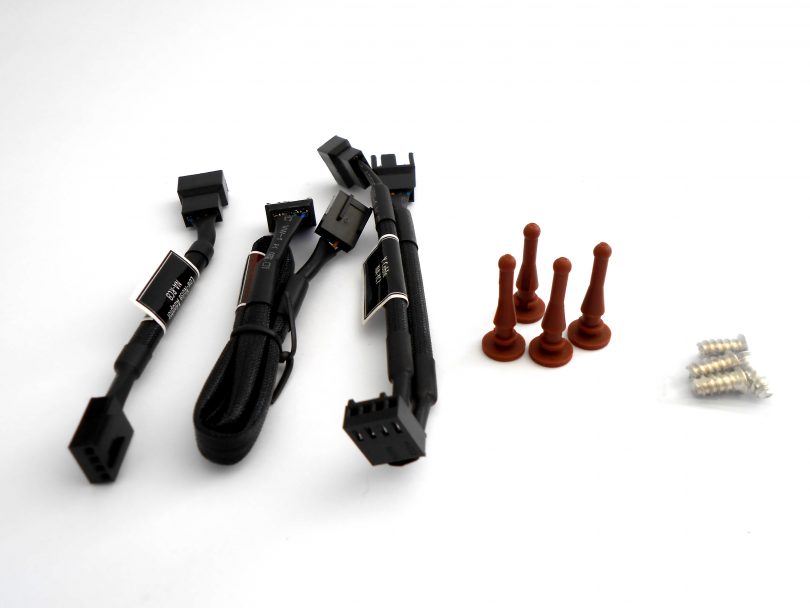 The accessory kit is complete, and well thought out. From the left, we have a Low Noise Adapter (LNA), a 30cm extension cable, a PWM splitter, 4 vibration dampening mounts and 4 standard screws. The Low Noise Adapter is an inline resistor to reduce the maximum speed of the fan for quieter (but lower performing) operation.

All the fans reviewed today (except the NF-4×10 FLX, which we will get to later) included an identical kit, and thus we’ll avoid repeating this later on. 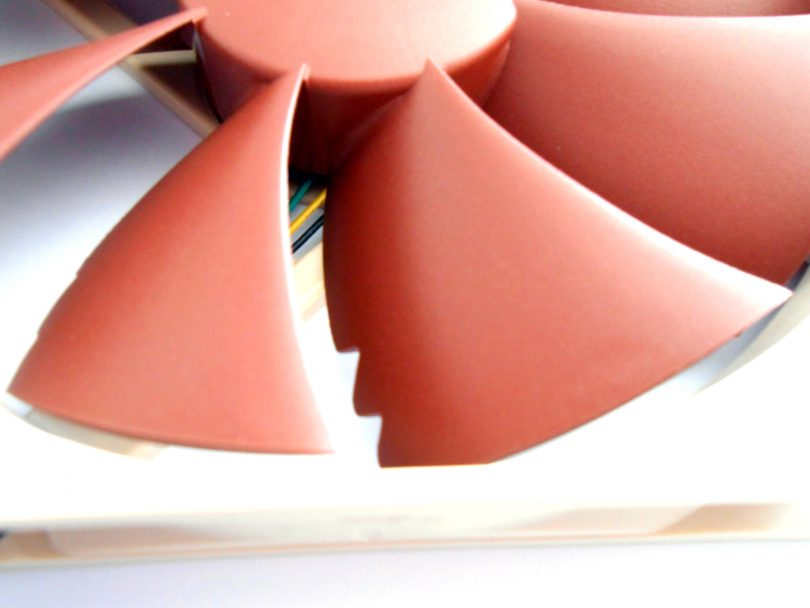 A close up of the vortex control notches!

The first of the A series fans that we’re looking at today, the NF-A9 PWM is a 92mm fan with some significant design differences from the NF-P12 above. It appears this series of fans is designed for a better balance between airflow and static pressure, rather than a more specialized use case – a great way to build a fan that’s compatible with whatever use case is thrown at it. 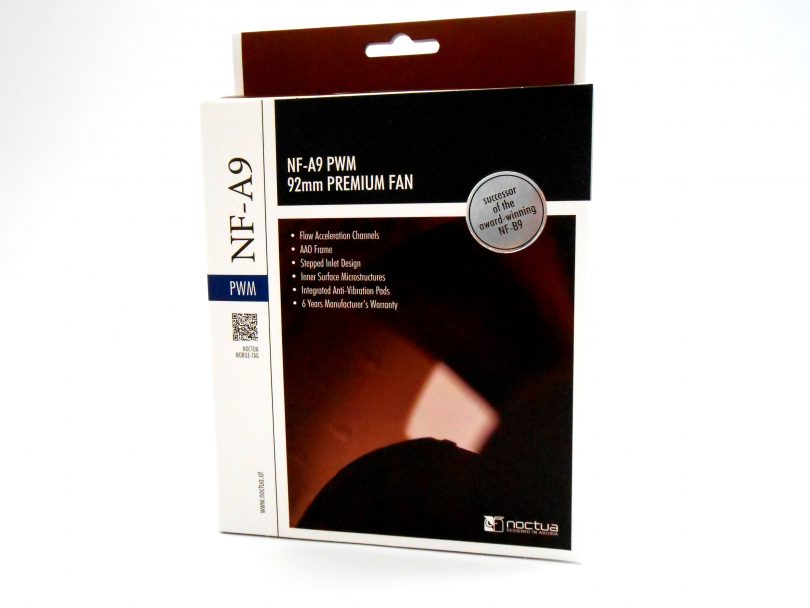 The packaging is the same style as the NF-P12 above, besides changes in information to suit this particular fan. The NF-A9 supersedes the discontinued NF-B9, which had a significantly different blade design. 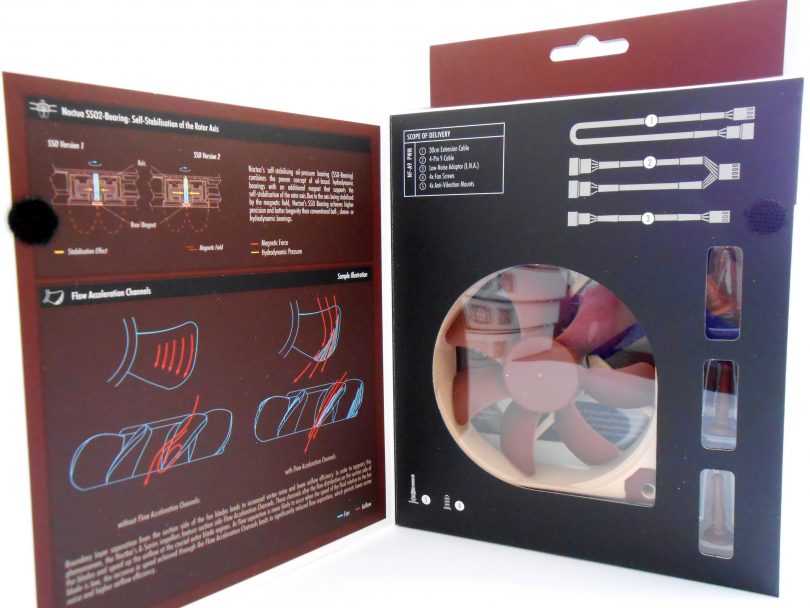 Inside the packaging we see a similar story to the NF-P12, but once again with different technologies detailed to suit the product. 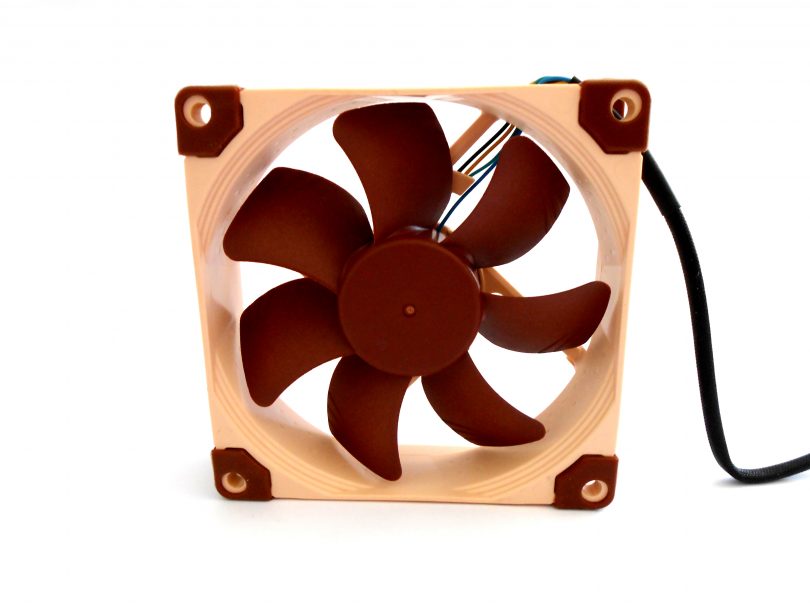 The NF-A9 PWM includes vibration dampening on the corners, as well as a stepped intake design. Both of these are meant to work towards a quieter, more pleasing sound in use. Noctua also claims that this design aids in airflow and suction in restrictive environments, such as when pulling air through a thick filter.

The blades also have ‘flow acceleration channels’, once again aimed at making the fan quieter and more efficient. 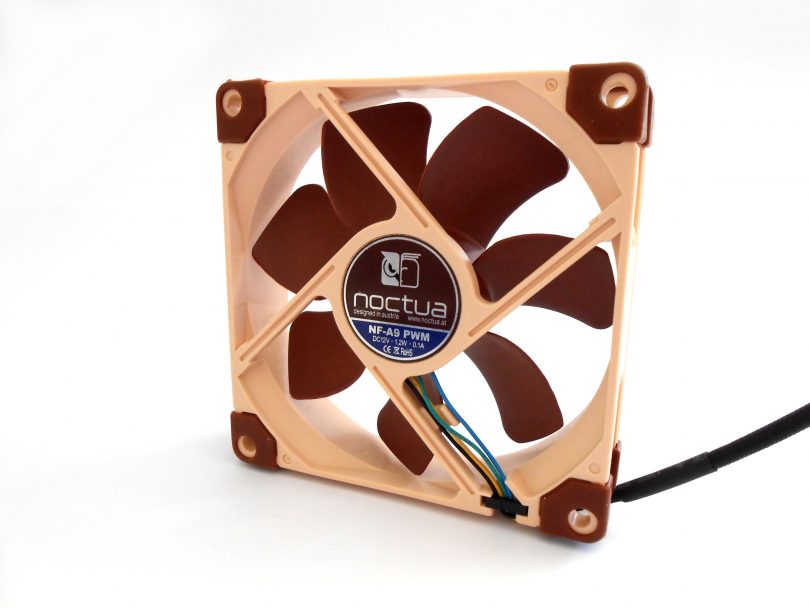 Looking at the back of the fan, we see the model number and basic specs on the bearing cap, as well as a section of unsleeved power cables. From the fan to the plug however, as before, the cable is sleeved. The cable is 20cm long, and a 30cm sleeved extension is included in the box. 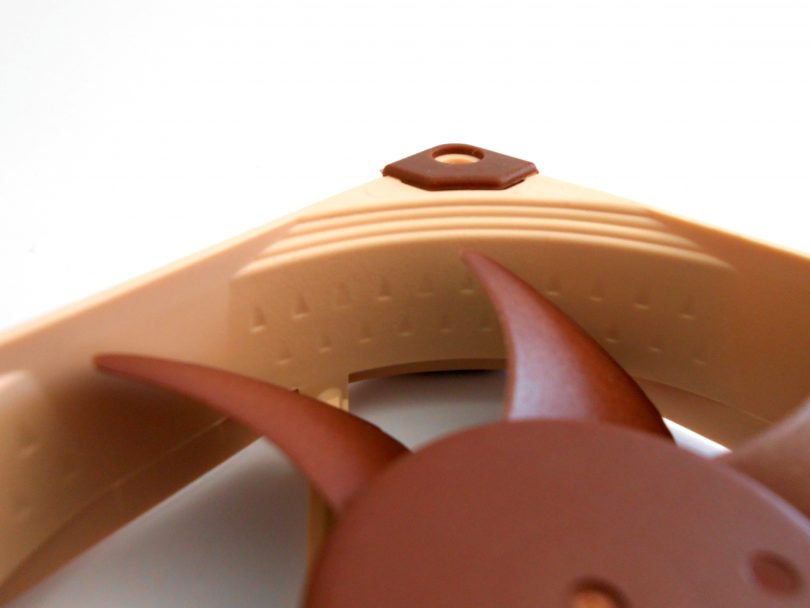 Noctua’s Inner Surface Microstructures are present on this model, which they claim reduces noise and increases efficiency. Visually, however, these are a bit too subtle to notice unless you’re looking for them.

The NF-A8 PWM is the 80mm variant of the A series fans. The technology and features included on the model match the NF-A9 PWM above, however, so I won’t go into quite as much depth as a result of this overlap. 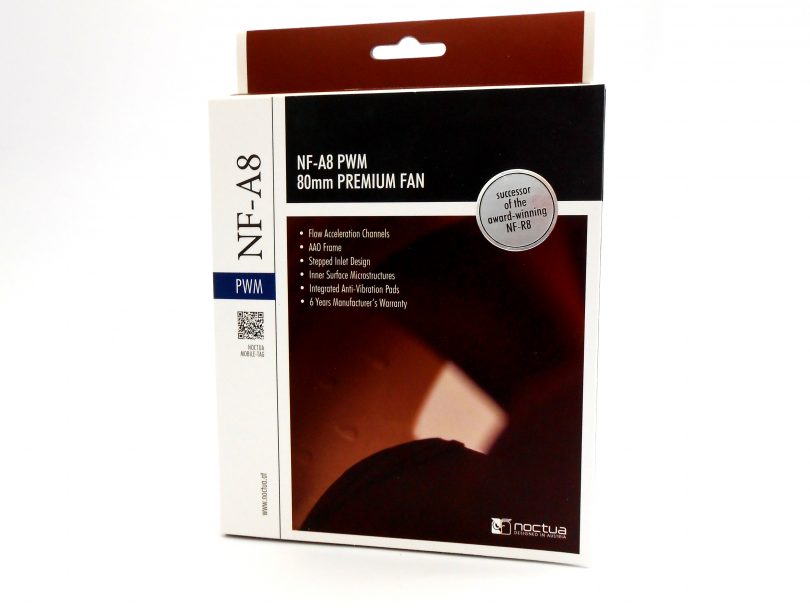 The packaging is as for the NF-A9 PWM, but with the required changes for the A8. This fan succeeds the discontinued NF-B8. 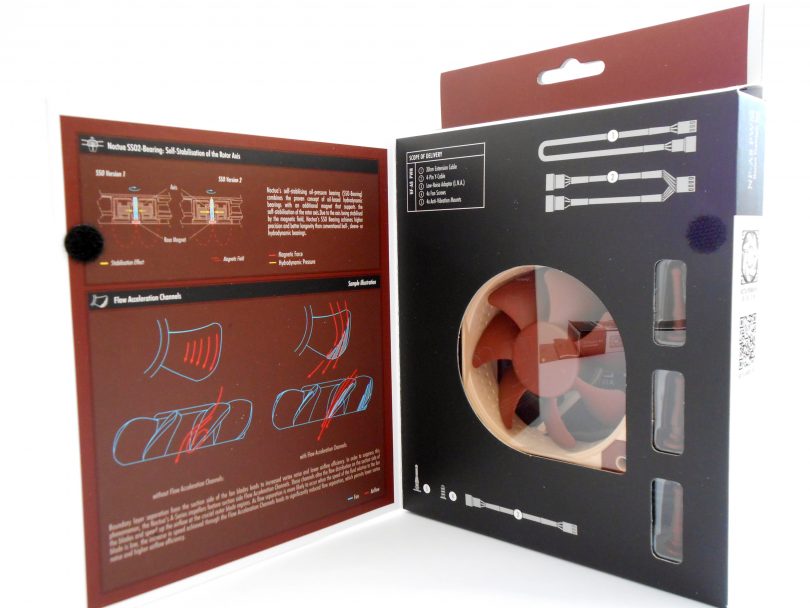 All of the fans today came in identically sized boxes, with minor changes to suit each product. It’s curious that the packaging doesn’t scale with the size of the product, but it seems to work just fine for Noctua. 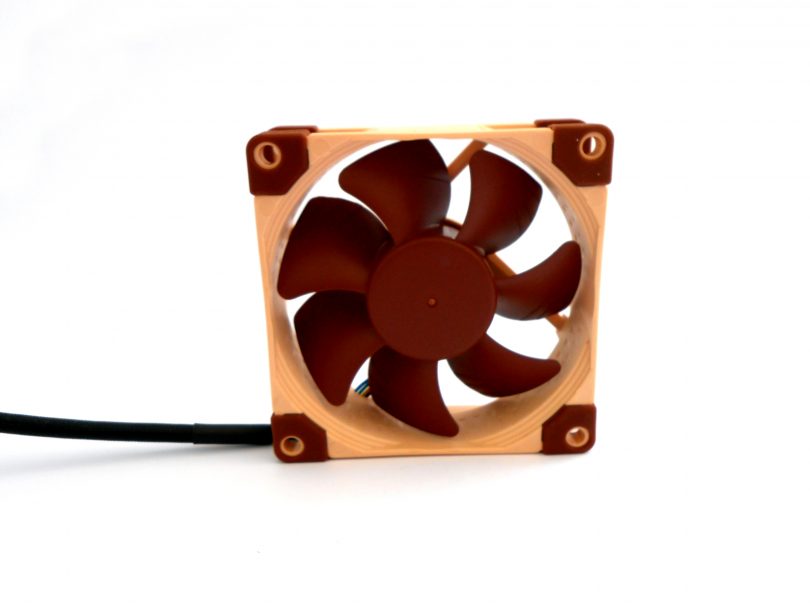 The stepped design is evident here, as are the inner surface microstructures. 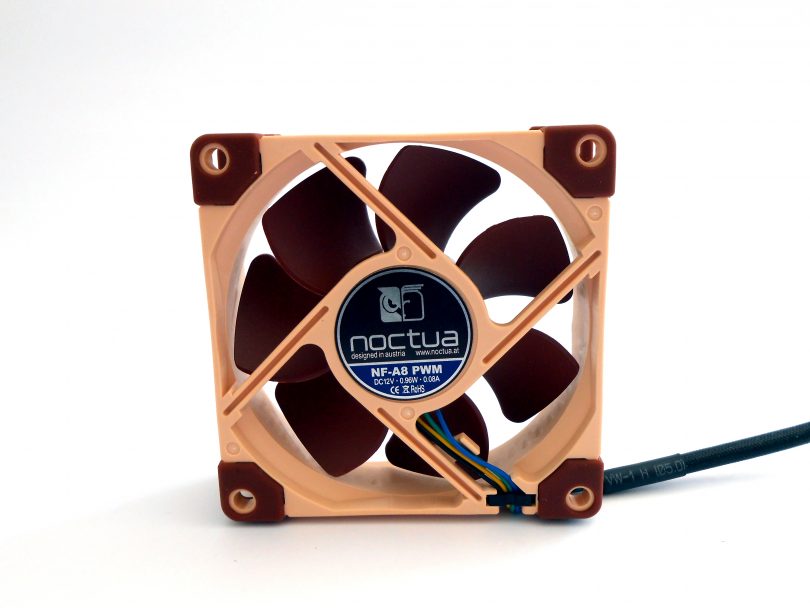 I can see those pesky fan wires again! The sleeved cable is again 20cm long, with a 30cm extension included in the box along with the usual accessories.

And now for something completely (well, sort of) different. The NF-A4x10 FLX is a tiny fan, but with it’s size comes interesting uses, as evidenced by the myriad of included accessories. While this fan is a scant 40mm across, I would recommend comparing its airflow specs versus an existing fan if you’re considering replacing the fan in your Flex-ATX, 1U or other power supplies, for example (or even one of your home electronics, which often rely on fans of this size).

This particular model can run on 12v, unlike it’s A4x10 5V brother. I believe the ‘FLX’ moniker denotes that this fan comes with extra cable adapters. 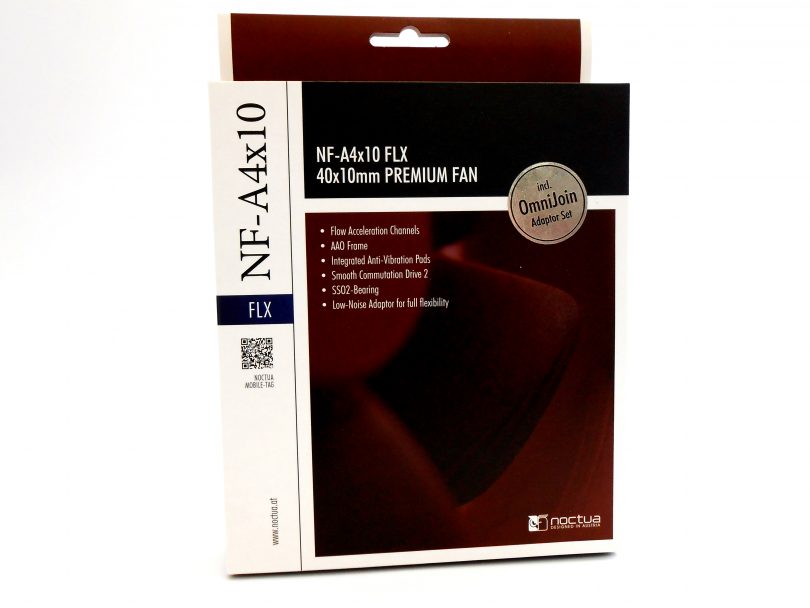 The OmniJoin adapter set named on the sticker is a fantastic addition, which we will see below. 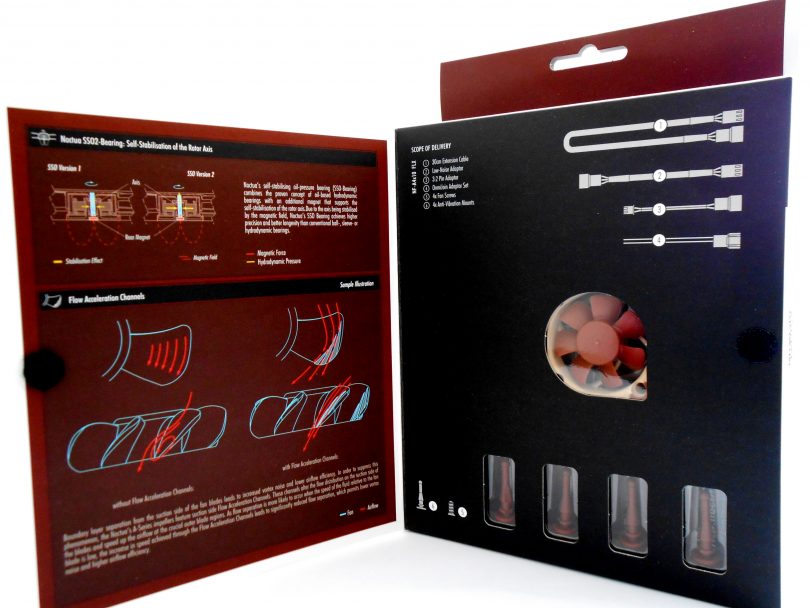 As per the A9 and A8 above, this fan features a large amount of Noctua technology in the pursuit of a high performing, quiet, quality fan. The size of the packaging compared to the fan itself is a bit comical, however. 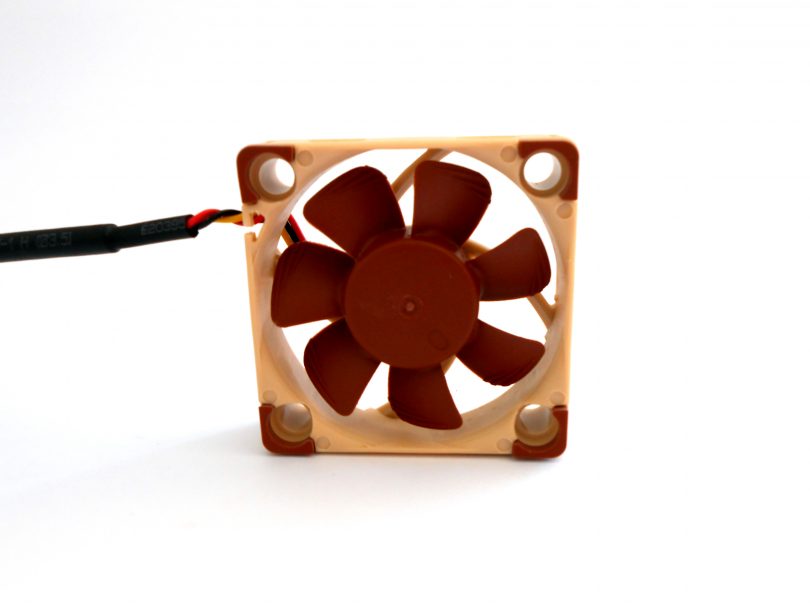 It’s so cute! The vibration pads included with this fan are of a different, non removable design, likely due to size constraints. While the gaps between the blades and fan chassis may look large, remember this fan is only 40mm in size, and the gap distance in real terms comparable to the larger Noctua A series fans.

The hub is noticeable smaller than most 40mm fans, which enables the useful part of the fan, the blades, to be larger. This should speak well to performance, so long as the motor is up to snuff. 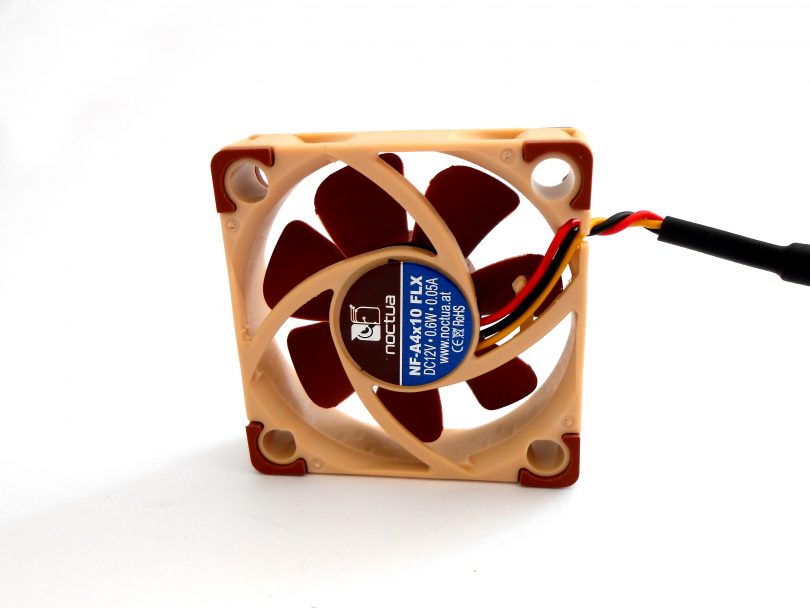 Visible coloured wires… But this time, there are only three, as this fan is not a PWM controlled product (an understandable fact considering the size). The attached cable runs 20cm from the fan to the plug, with a 30cm extension included. 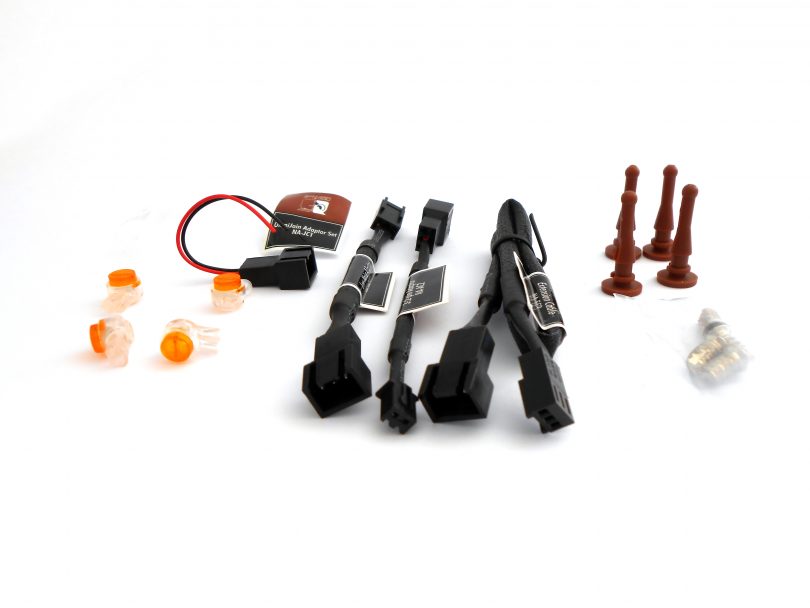 This is where the NF-4×10 really excels – the included accessories. From the left; the OmniJoin adapter kit, a Low Noise Adapter (LNA), a 3 pin to 2 pin adapter, a 3 pin extension cable, vibration dampening mounts, and standard fan screws.

The OmniJoin adapter kit is a brilliant addition, essentially enabling a user to plug the fan into whatever it needs to be plugged in to. The kit includes a 3 pin socket with two short wires, and four 3M Scotchlok connectors.

To use this kit, a user cuts the wires from their existing fan, inserts the wires to be connected (red to positive, black to negative) into each connector, and squeezes down with pliers. No wire stripping or soldering needed! I have personally used hundreds (if not thousands) of these Scotchlok connectors in the past, wiring up IR and copper phone lines in high end home theatre builds, and have found them to be easy to use effectively and reliably.

Also a great addition is the 3 pin to 2 pin adapter. Including this enables the use of the fan on chipset heatsinks, and some GPU heatsinks, as well as any electronic devices that use this connector with a 40mm fan, especially set top DVRs and DVD players.

All in all, these products are well built, well designed, and are able to achieve specs that by-and-large merit the premium price asked of them. None of the tested fans exhibited loud operation, and the included accessories ensured that the fans can be used in many different systems.

As usual, the Coffee and Cream colour scheme of these fans may polarize the target audience, but once again I see the colors as a clear sign that you are willing to pay for a quality, great performing product. It is typical for high-end or “luxury” goods to embrace a brand, style, or ethos, and Noctua does precisely that with their distinctive color scheme

The rest comes down to performance, though, and while you’ll pay top dollar to install a Noctua fan in your build, we’re hard-pressed to imagine how anyone will find themselves disappointed.

Colors (to some –  this is certainly subjective)

Prices at time of publication on Amazon.com:

SFF.N depends on community members like you to stay online! Consider a one-time donation to support the site, or take a look at our monthly supporter subscriptions for exclusive perks and benefits!
Total: 186 (members: 35, guests: 151)