In Greek mythology, Steropes, Brontes and Arges are three siblings decended from Gaia and Uranus (stop giggling, you in the back). They were the blacksmiths to Zeus, Poseidon, and other gods. In this case, however, Steropes is a 60mm tall CPU cooler from a relatively unknown brand – Reeven.

REEVEN is a newly established international manufacturer of PC related products. REEVEN’s product lines include the best quality of advanced CPU coolers, cooling fans, PC cases and many other items. The target of our products will be a wide range of audiences under our philosopohy “Professional Quality Gears”, for products that will withstand the highest demands.

So, Reeven sent us two coolers to review, The Steropes and the Brontes. Today we are looking at the larger Steropes, but expect the Brontes review soon! 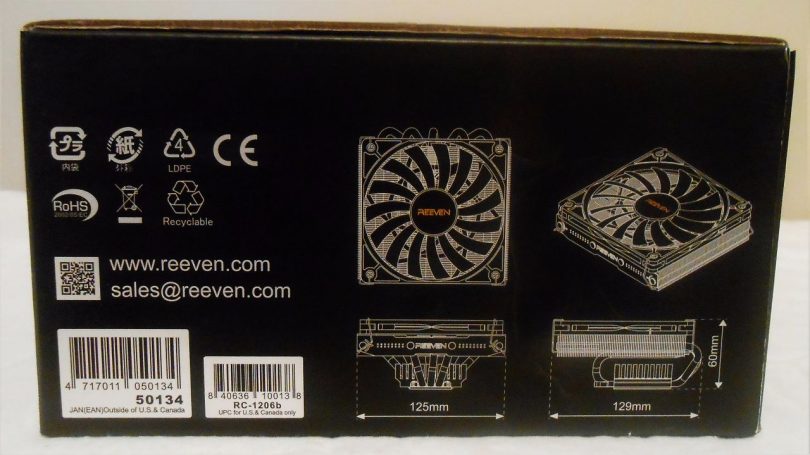 On this side of the box, you’ll find technical drawings of the cooler, as well as some certifications. This cooler measures 125mm wide, 129mm deep and 60mm high. Although it’s the larger of the two, the profile is reasonably compact given the 12omm fan it supports. 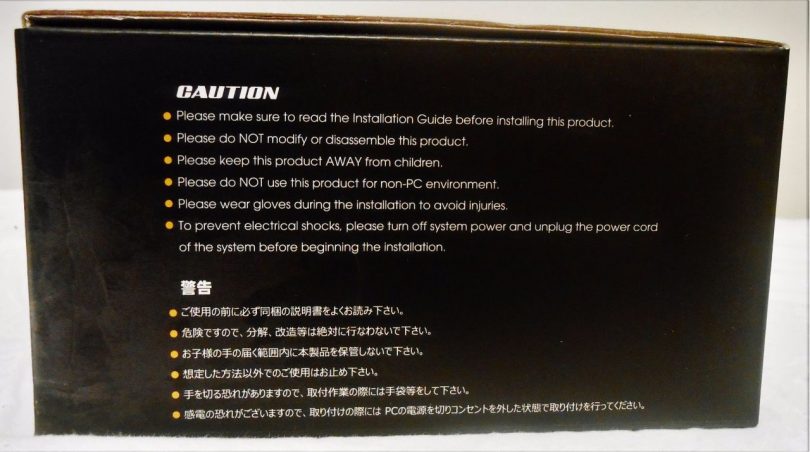 All of the warnings. Don’t mod this product, use it to cool your children, or cut yourself with it!

Let’s start unboxing! Upon peeling open the top panels, we find that the cooler is well packed, with dense foam and cardboard protecting the cooler adequately. 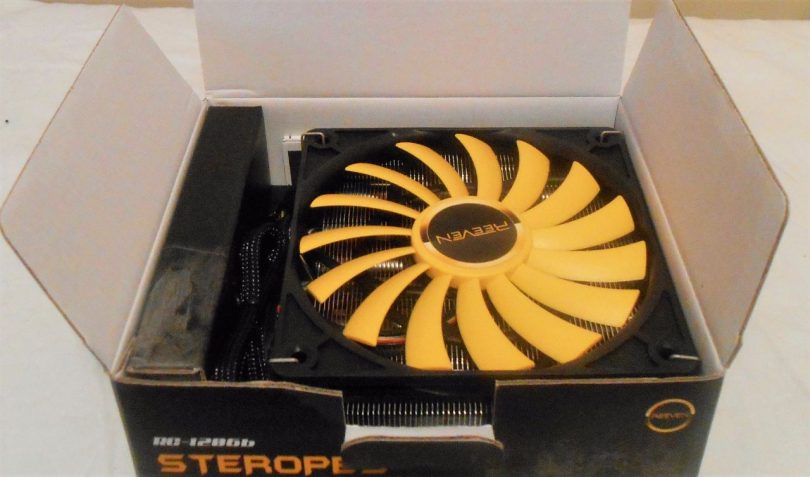 Foam removed, and cooler revealed. Wow, this thing is bright!

Apart from the cooler, an installation kit and manual are included. 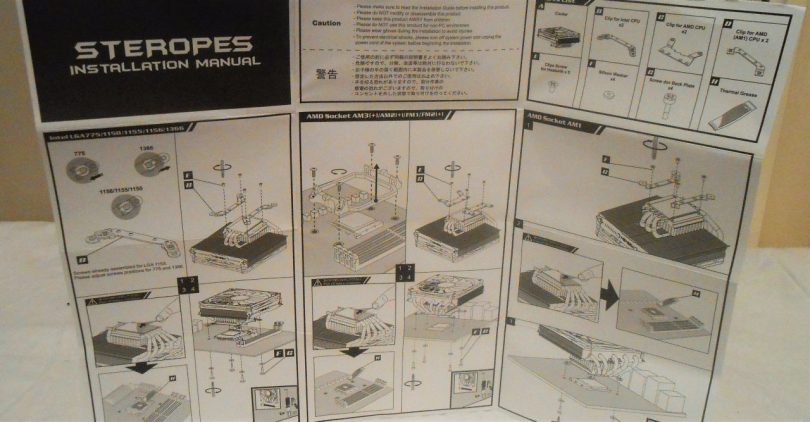 As we unfold the documentation, you can plainly see that the manual instructions are well illustrated and very clear. I found no issues with the information provided. 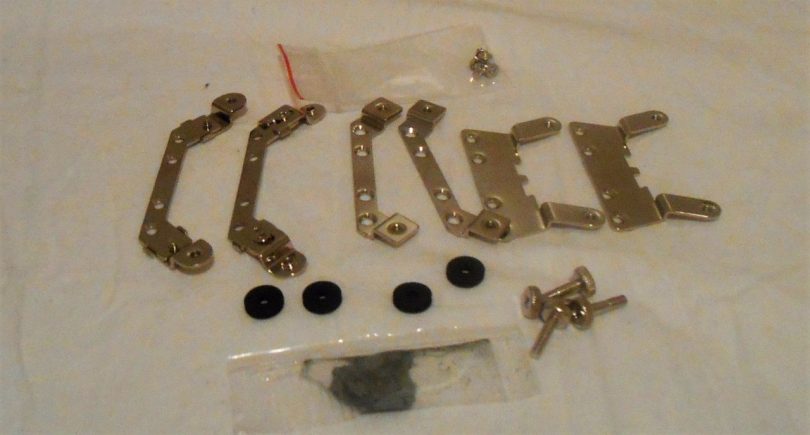 Turning to the installation kit, the mounting hardware included with it is thorough, and is actually very similar in design and style to the Scythe cooler mounting system. I have no complaints about this – it works, it’s reliable, and it supports multiple sockets, which is just about everything you need. A small sachet of thermal paste is also included, though I did not test this paste. 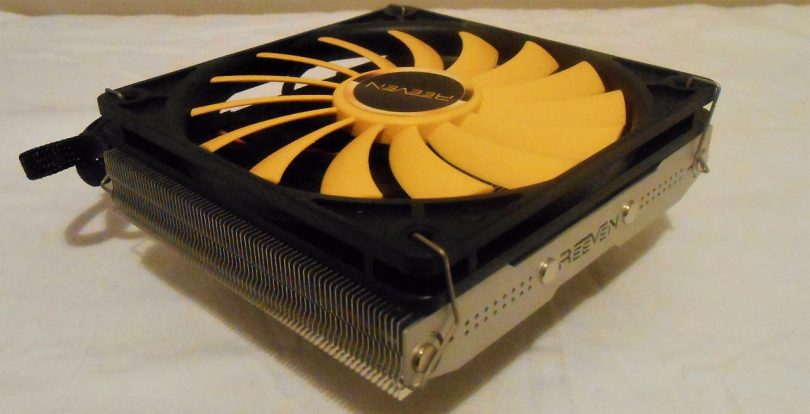 The Sterops itself. At first glance, it appears to be a generic top-down cooler, but a closer look reveals some changes, mostly focused on aesthetics.

The fan is a slim 120mm fan, produced by Reeven. The build quality is on par with their contemporaries, namely the Scythe Slim Silence and Prolimatech Slim fans. Really, the standout deviation is unquestionably the bold yellow plastic used for the blades. 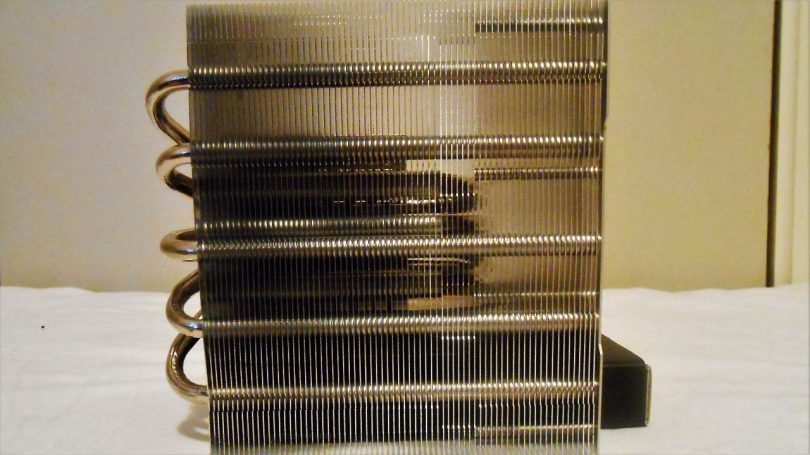 Pulling the fan off of the heatsink, we can take a moment to better appreciate the metal of the cooler. From above, the fin structure is demonstrably dense, with the five-heatpipe layout clearly visible. (Note that the 4x short tunnels in the fins are pins that hold the endplate onto the heatsink)

The aforementioned endplate. This plate really adds to the looks of the cooler, which to a certain extent was unexpected since most top-down coolers focus wholly on top-down appearances.

The plate is not attached to the heatpipes directly, but is rather connected via the 4 pins, which are secured to the fins. The plate itself is thicker than the fins, though, and Reeven has elected to give it a pleasing matte anodised finish.

Flipping the sink over, we can see how the heatpipes start in the fins and route through the base. Two of the heat pipes terminate at that juncture, but the remaining three continue out and connect to the bottom of the fin array to add to the cooling potential. Fins on the base plate also add to direct cooling potential, ensuring that the heatpipes alone aren’t doing all the work. 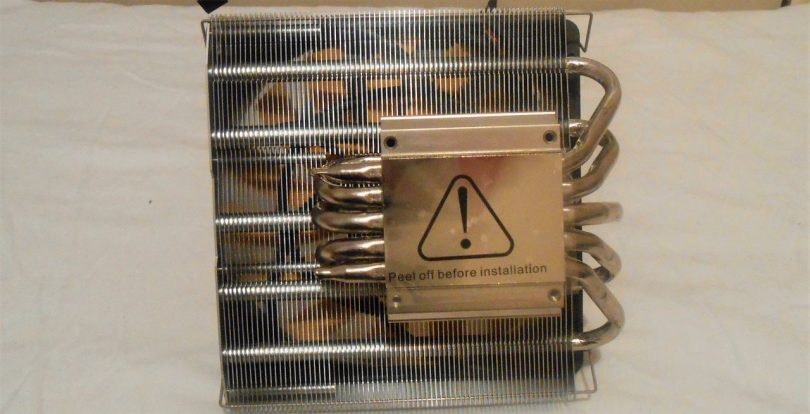 The base is well machined and smooth. The 4 holes seen are for the mounting hardware…

…Such as here, where we have the AMD mounting parts installed. As expected, installation on the cooler is simple, comprising of just 4 screws. 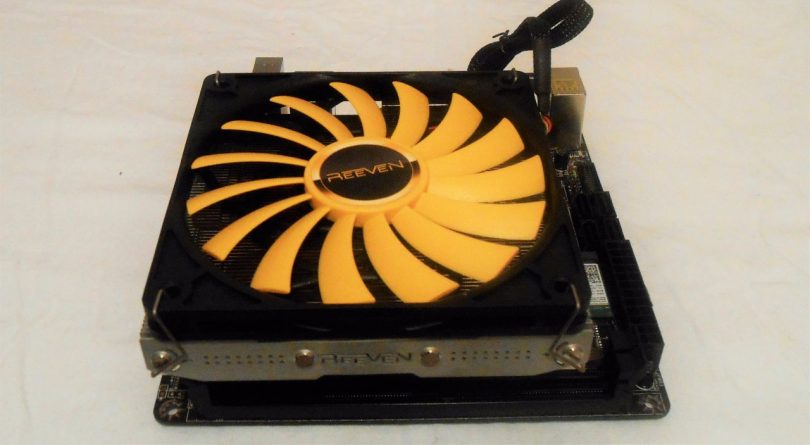 As you’d hope for, this leads to a least install, and it was simple enough to mount the cooler to the board. I always like the look of >100mm top-down coolers on ITX, covering a large portion of the motherboard! Really puts into perspective how compact ITX is. 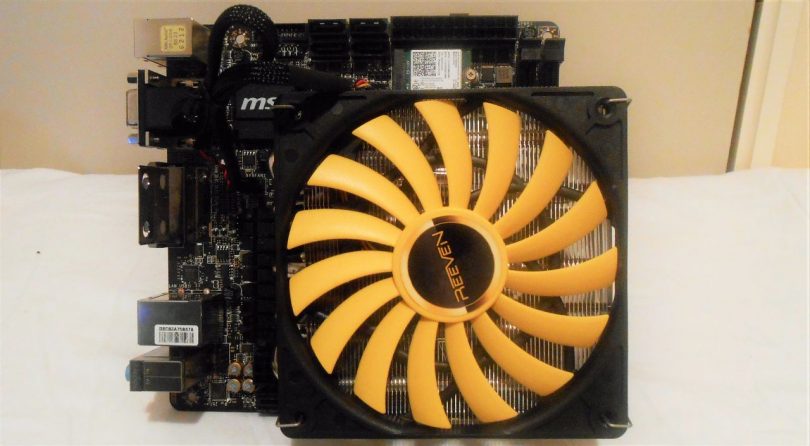 That said, when taking a look at the cooler in this particular mounting setup, you’ll notice that it’s possible to have it bee markedly offset. Why? I will explain below. 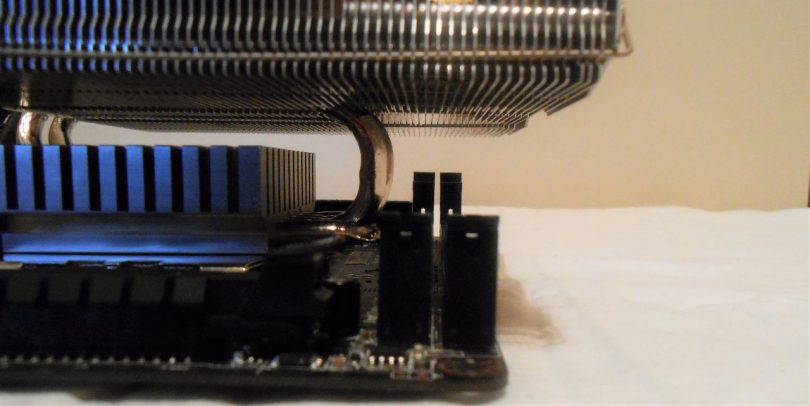 In the initial mounting setup with the cooler offset to the board, the heatpipes clear the RAM, but only regular height or low profile DIMMs will reliably fit… 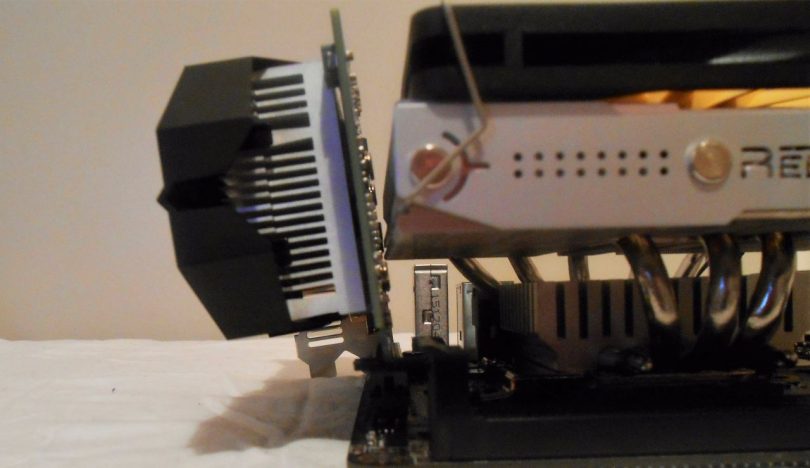 …On the bottom edge of the board, though, the cooler does block the PCIe slot.

…but the RAM height limit is removed.

Alas, in both orientations, the PCIe slot is blocked. The cooler sits over board nicely, however the pressure on the VRM heatsink caused by the heatpipes may prevent that heatsink providing full cooling to those components.

To test this cooler, we used the SmallFormFactor.net thermal test bench and methodology, as detailed here.

The cooler performs on par its contemporaries, which is to be expected given the somewhat conventional design. Out of the coolers tested on the small SFFn test bench, it performs in the middle of the pack.

In the noise world, the cooler was slightly louder than expected, but this may be down to the slim fans – it’s indeed very difficult to get sufficient airflow out of slimmer fans – especially through dense fin arrays – without resorting to speeding the fans up, and thus making far more noise.

Still, while it does produce more pure decibels, the noise itself is mostly soft and airflow-related, there is no chuffing, squeaking, or any other characteristics that would overly detract from the aural performance. So we’re talking a consistent droning noise that can fade into the background in time, rather than a more irritable chipping or other inconsistent noise that would be bothersome at much lower volume levels.

For the first cooler we have seen from Reeven, I am very impressed. The build quality is high, the aesthetic factors are excellent, and the performance is satisfactory. The Reeven products adds some competition to SFF market, which is great to see, as some of the larger and more established players have been resting on their laurels (and their existing lineup) with little to no performance increases or aesthetic changes in the past few years.

The colour scheme is a matter of personal taste, and I suspect that it’s a love-it-or-hate it decision on the part of Reeven, but that could be changed easily by any end user simply by replacing the fan.

The endplate and other design features make this cooler a solid choice from the point of looks, particularly for gaming and other builds where a more ‘aggressive’ aesthetic is desired.

Finally, the performance is as to be expected, considering the cooler uses conventional heatpipe and fin technologies. Which is to say, not particularly exciting, but likely intriguing for more than a few enthusiasts.

This cooler is currently available for around $50 from Newegg.com