For some time, ASRock has been using the Fatal1ty branding on their high end products – a tie back to the days of old, where Quake was king, and bright, flashy branding was cool. However, Fatal1ty has given way to ASRock’s “Phantom Gaming” brand, with a much more subtle aesthetic. All black? Yes please! Beefy heatsinks? Yessir!

First sighted on ASRock’s limited availability (unfortunately) GPU line, the Phantom Gaming brand has come to motherboards – slowly taking over the performance space within ASRock’s lineup. This particular model uses the Intel Z390 chipset – what Z370 should have been, but I digress.

Reproduced from the product page and edited for clarity.

The ASRock Z390 Phantom Gaming-ITX/ac is retailing for US$179.99 at Newegg.com at the time of writing. 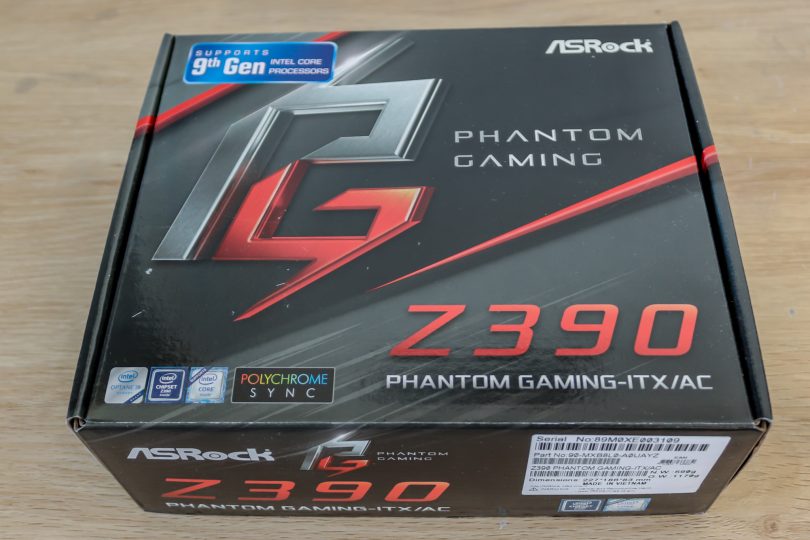 Black is the order of the day, replacing the primarily red branding of products past. 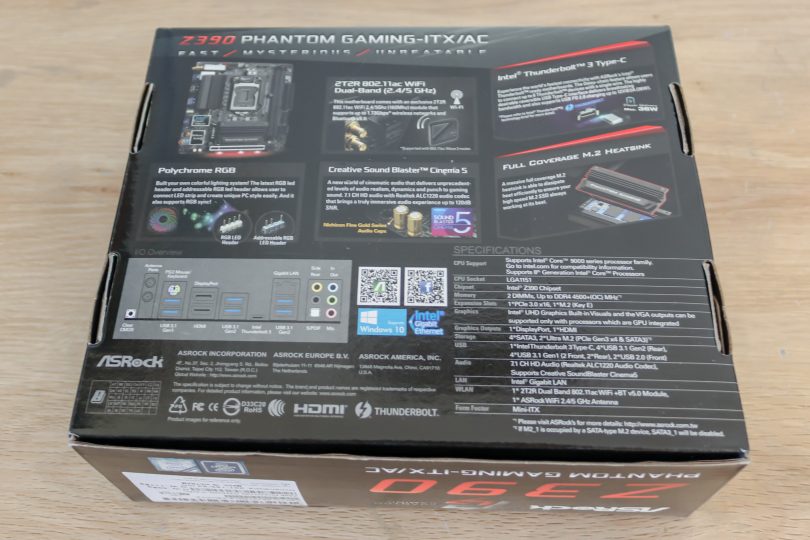 The rear side of the box includes the usual marketing; 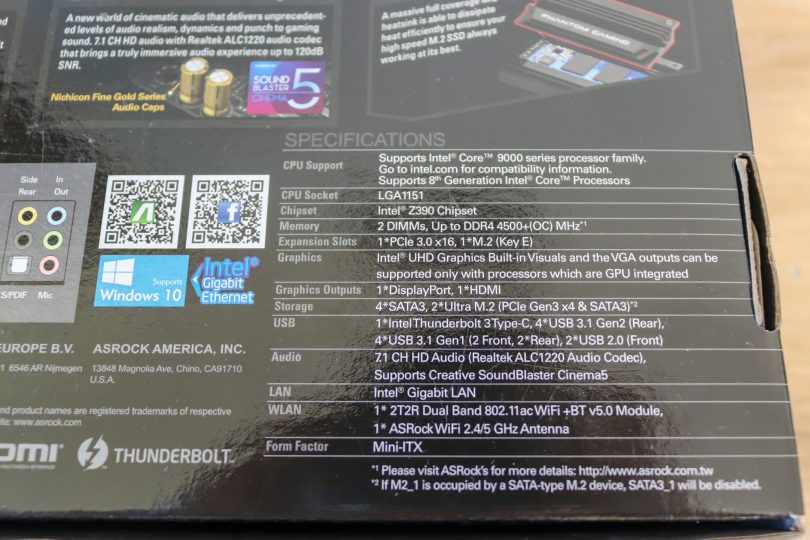 …and a spec table that has been reproduced above. 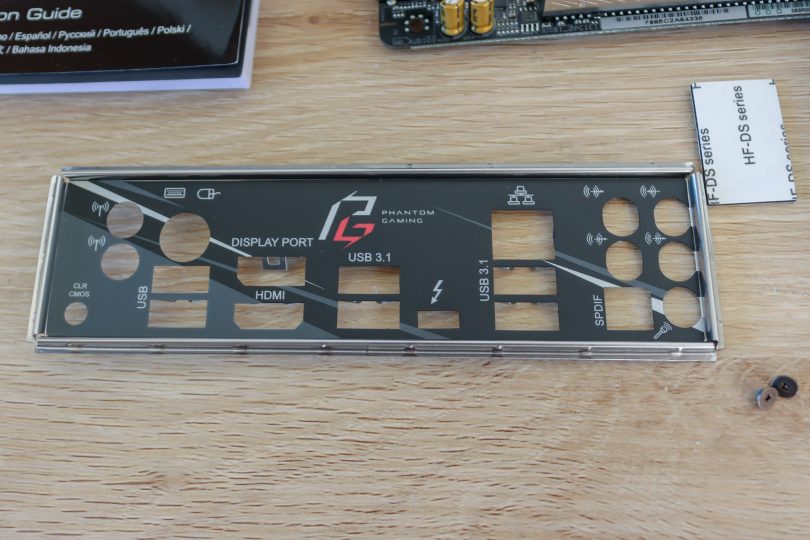 Included in the package, the usual accoutrements – an IO shield – in a much more subtle style than previous. 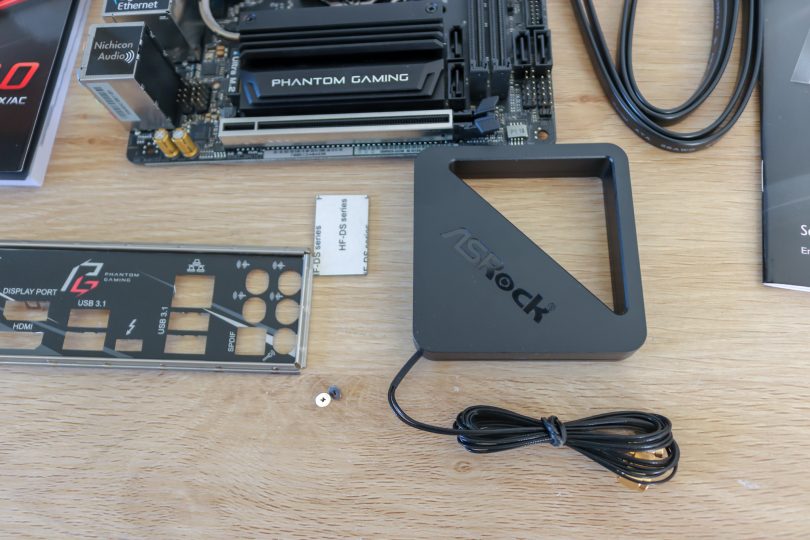 As well as the I/O shield, we also have a pair of M.2 retention screws, a WiFi antenna and a sticky pad for the aforementioned antenna. 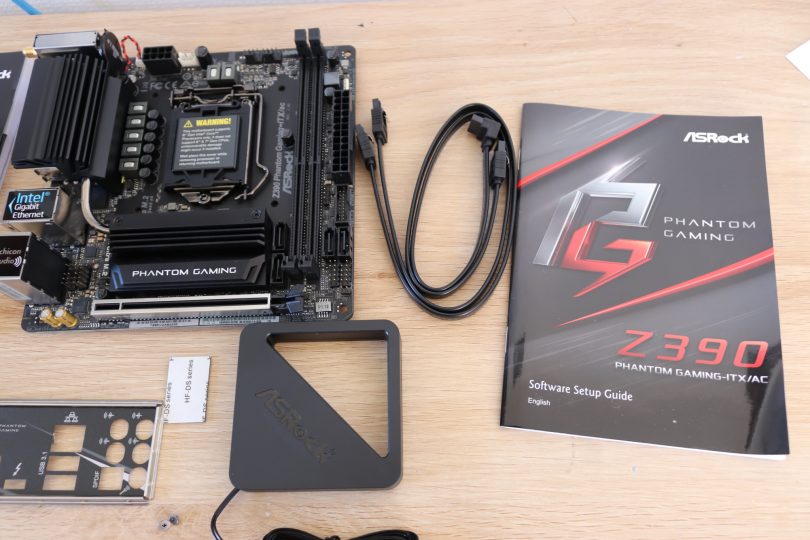 A pair of SATA cables, and a software setup guide… 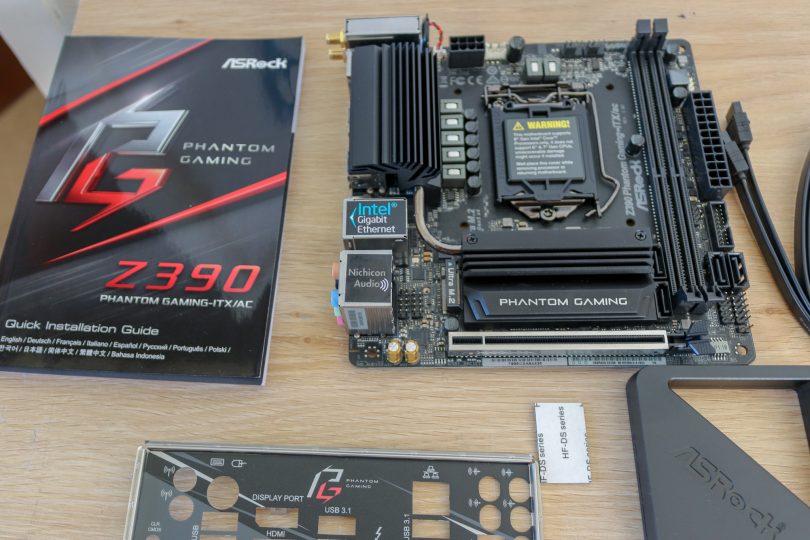 … and finally, a full quick installation guide in multiple languages. Hiding inside the manual is a driver CD, complete with case badge. 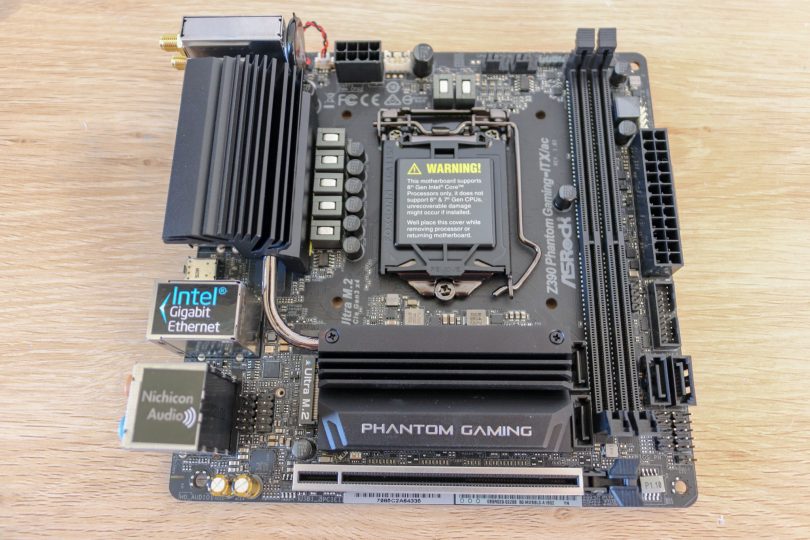 What a moniker! However, the long, gamer-esque name belies the subtlety of the aesthetic. No bright colours, bold graphics, or other gimmickry, just a well designed board. Using what is now a common layout, ample clearance is available for CPU coolers, memory and other expansion.

The WiFi solution sits near the top of the board, channeling the integrated WiFi in the Z390 chipset to the rear panel. Power input lies in two areas – the CPU input to the top left, and the ATX power input to the far right. These have become the normal locations – to the extent that some case manufacturers have been designing cable management for such designs, NFC being one example. 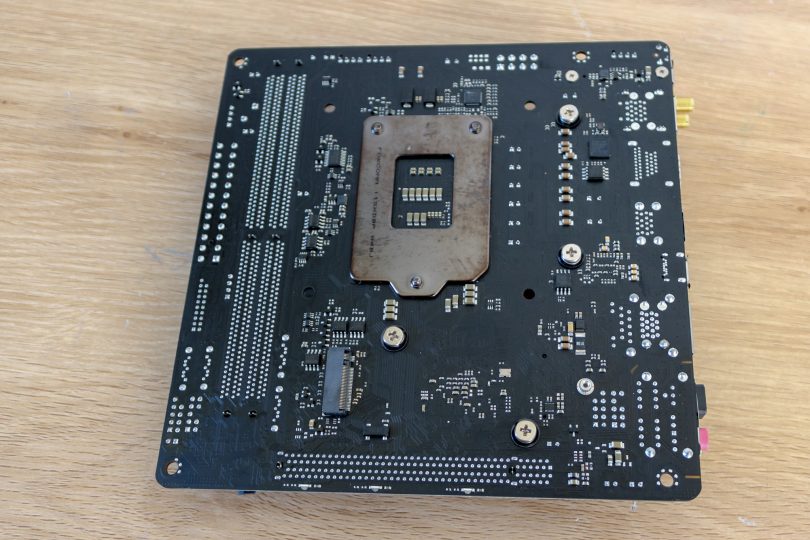 The back holds a sole M.2 slot – one of a pair on this board. We’re starting to see M.2 become a prevalent storage form factor over SATA, so the more the merrier. 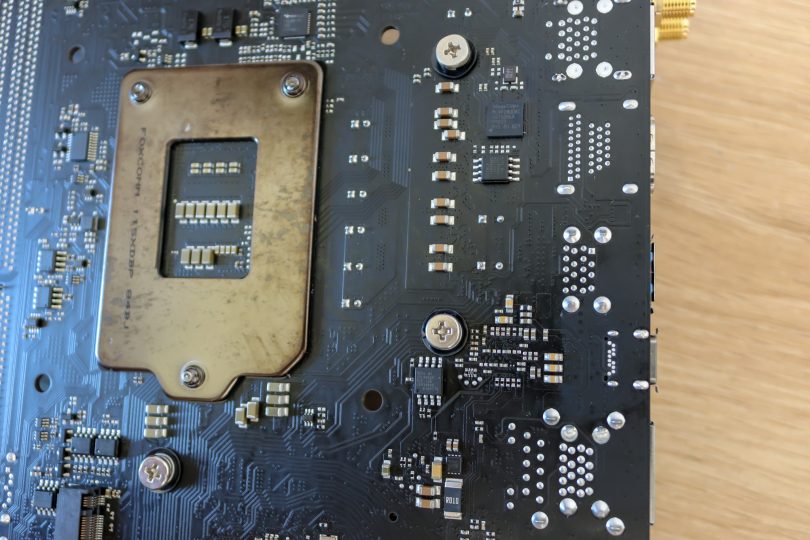 Under the rear IO, a plethora of supporting circuitry is to be found. Most visible are the three chips – a MegaChips MCDP2800BC and a pair of MXIC MX25L8006E.

The MCDP2800BC  is a DisplayPort 1.2a to HDMI 2.0 convertor chip – an interesting choice as the Coffee Lake IGP is only HDMI 1.4. A handy upgrade!

The MX25L8006E (PDF link) appears to be a SPI bus component, but that, alas, is above my knowledge set! 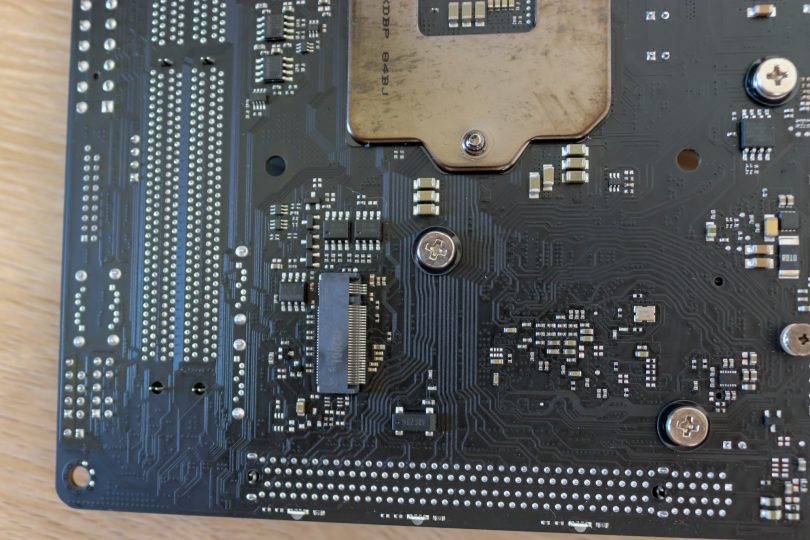 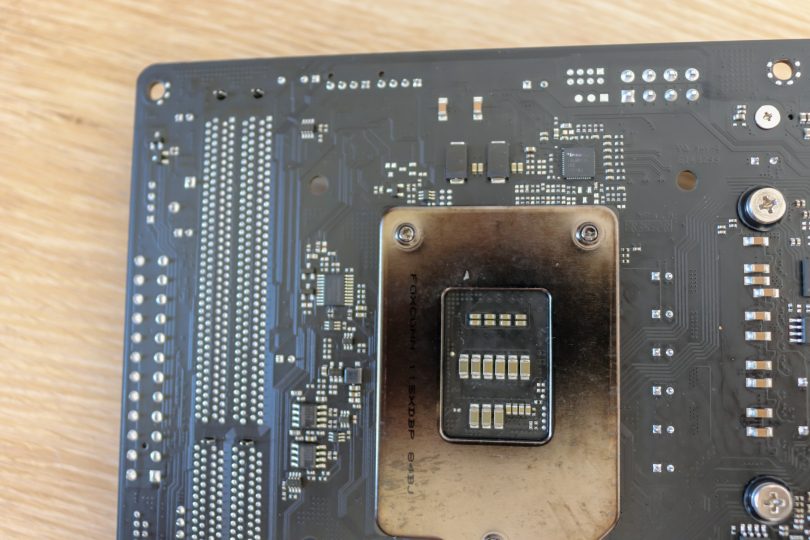 To the top of the CPU retention plate is an Renesas/Intersil ISL69138 (PDF link) – a PWM controller. This chip is a specifically designed solution for controlling the CPU, RAM and system bus power supplies on an Intel platform board.

Above the pair of Nuvoton 3101S Bus Termination Regulators (PDF link) and supporting circuitry (these support the RAM subsystem) is a N76E885AT28, one of a family of microcontrollers from Nuvoton. These are general purpose microcontrollers. 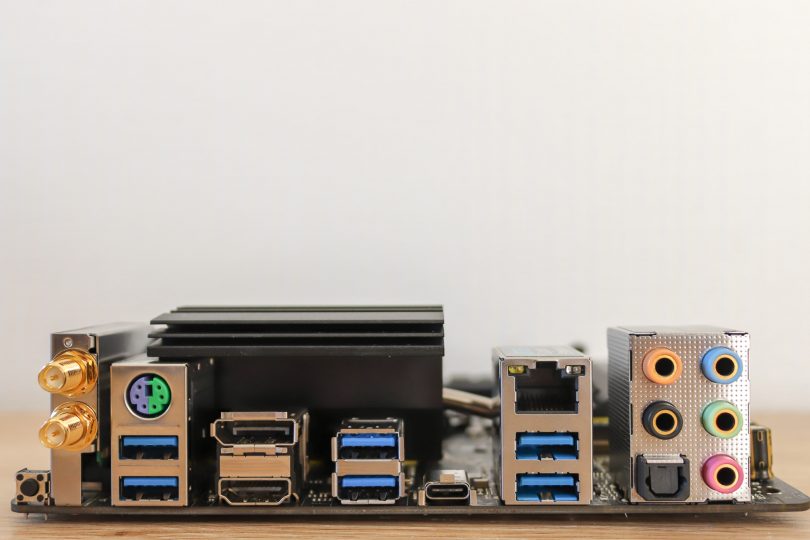 The Thunderbolt 3 port has been a controversial matter in a way. While this port supports USB3.1 Gen 2, as well as USB-C display outputs, it is limited in its bandwidth versus full-fat Thunderbolt 3 products. This is an artifact of using only a pair of PCIe lanes rather than the typical quad lane specification – leading to a roughly 16 Gb/s pipeline versus a possible 40 Gb/s. 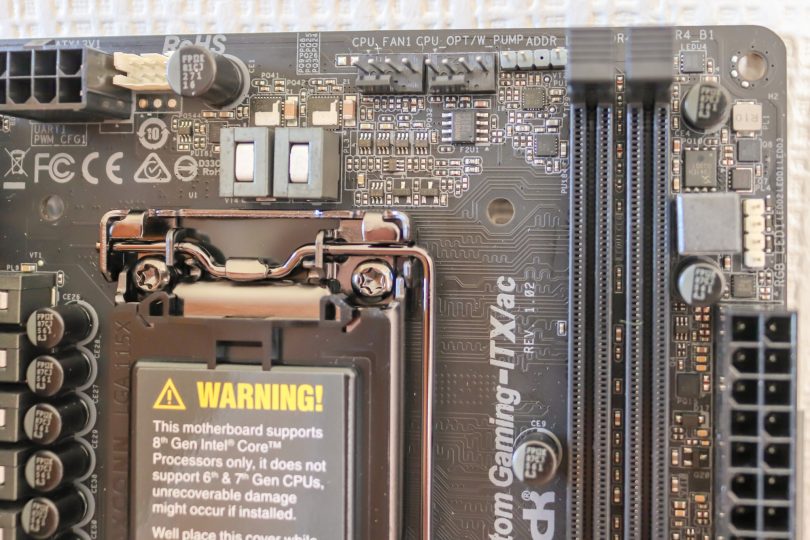 To the top side of the board. A pair of 4 pin PWM headers are present – a CPU fan header and a CPU secondary fan or waterpump header. To the right of these is an addressable RGB header (of course). The white 4 pin header to the far right is an RGB header for the plebians with regular RGB strips. 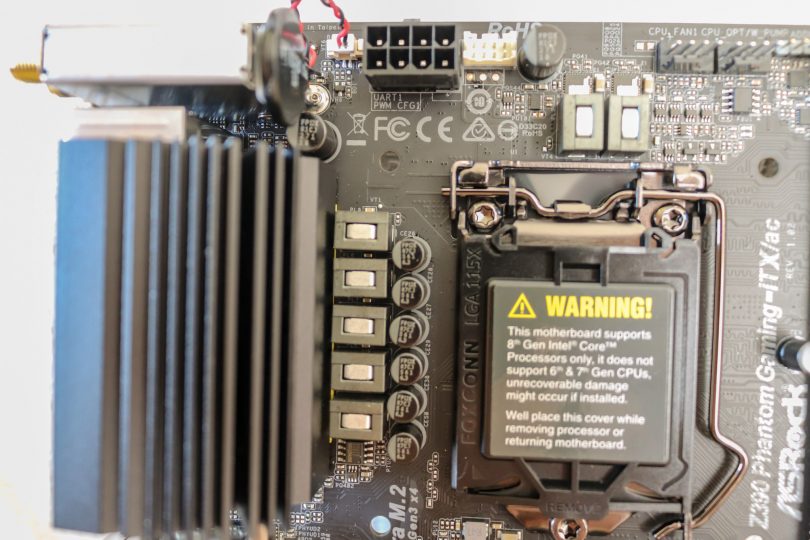 Next to the 8 pin power input is an 8 pin UART header. To the left of the Foxconn made CPU socket, the inductors (claimed to handle 60A each!) and caps for the CPU power section are nestled into the heatsink for the MOSFETs. 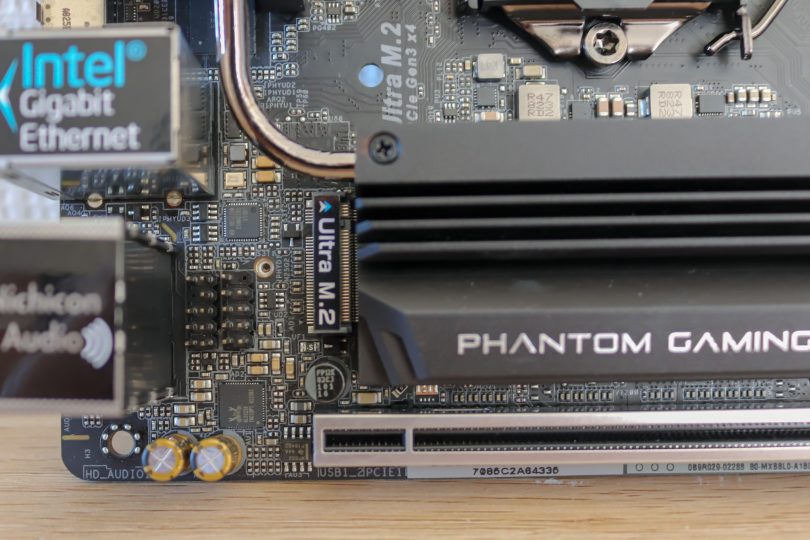 Down to the bottom   left, where we find the Nichicon capacitor based audio section. Controlled by a Realtek ALC1220 audio codec, ASRock claims a 120dB SNR DAC – pretty good if it stacks up. Alas, I don’t have the hardware, or the ears, to test this.

The front panel audio header is powered by a NE5532, powerful enough to run 600 ohm headphones. To the right, a USB 2.0 front panel header.

Below this legacy header is the aformentioned Realtek ALC1220 IC. Above the header, a WGI219V Intel ethernet PHY chip. 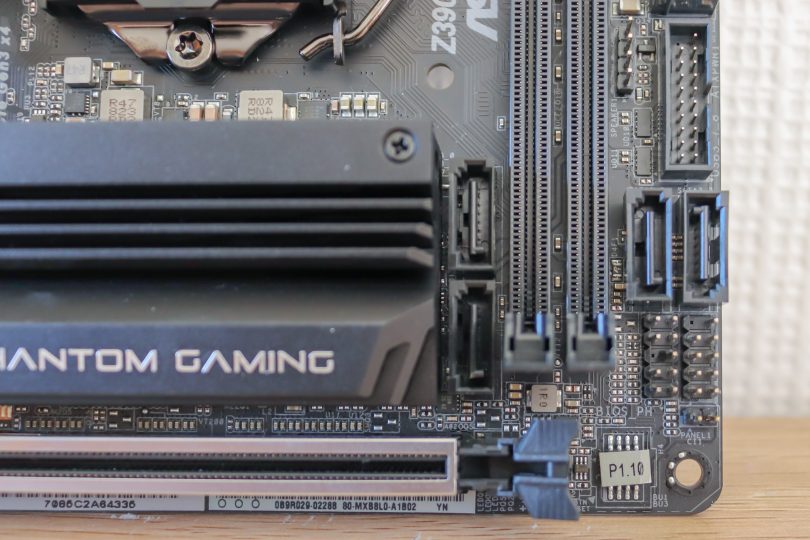 The quartet of SATA connectors are split by the RAM slots – belying their secondary nature to a modern ITX system. Under the rightmost SATA ports are the front panel header to the right, and a BIOS programming header to the left.

The board came with BIOS revision 1.10 – at time of writing, the BIOS version is up to 1.30 – a few tweaks and fixes have been done since this review unit was shipped to me. 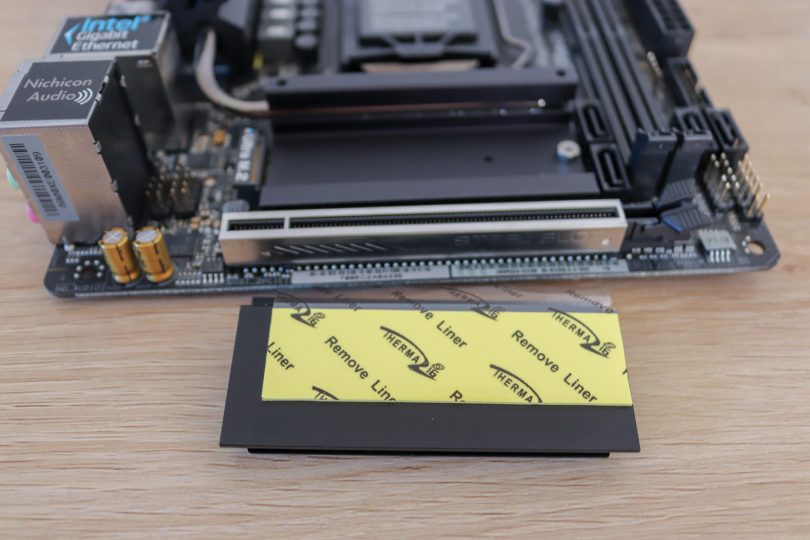 Inside the two-part chipset/VRM heatsink assembly we find a ThermaL 16 16 pad – 1.6mm thick and from a brand I’m not aware of. In the near future, I plan on testing the efficacy of this mounting location as to cooling – it was not something I was able to test at time of writing. 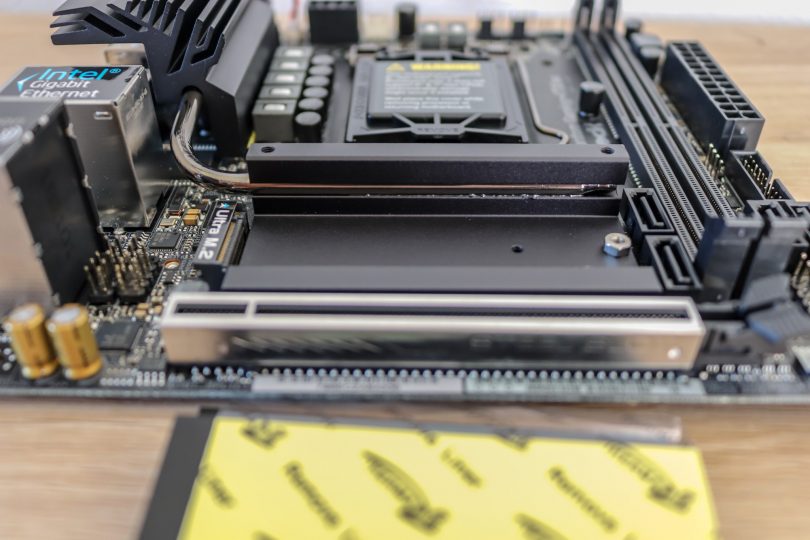 The heatpipe is around 5mm in diameter, and dark nickel plated. 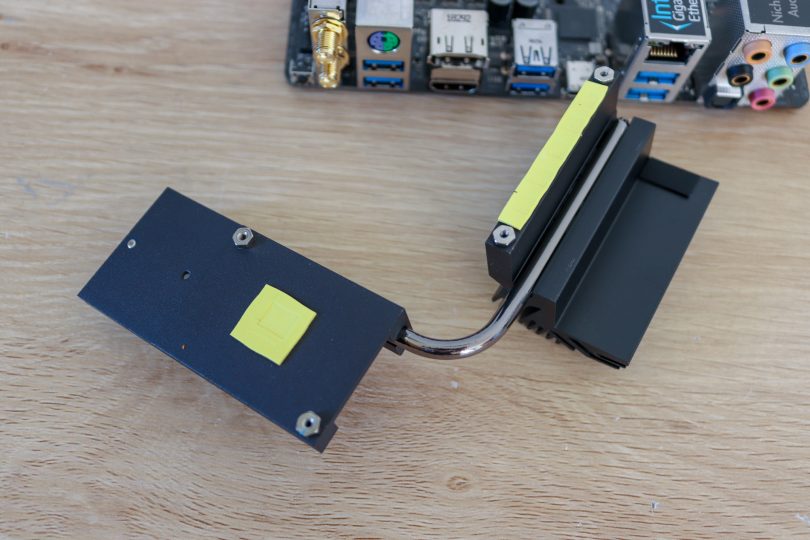 The VRM, chipset and M.2 heatsink array takes centre stage – made from black anodised aluminium with a sole heatpipe to share the load between the heat sources. 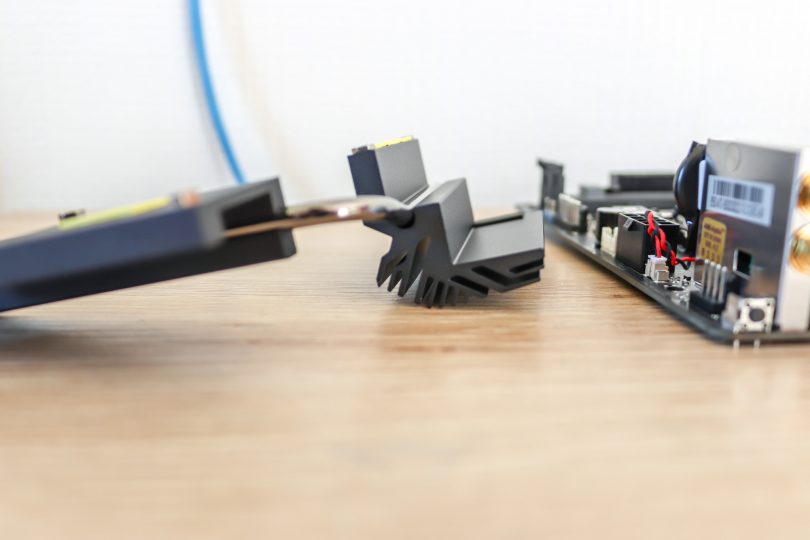 A hefty chunk of aluminium. Whilst the aesthetics are subtle, there’s enough surface area to really suck some heat from the VRMs. 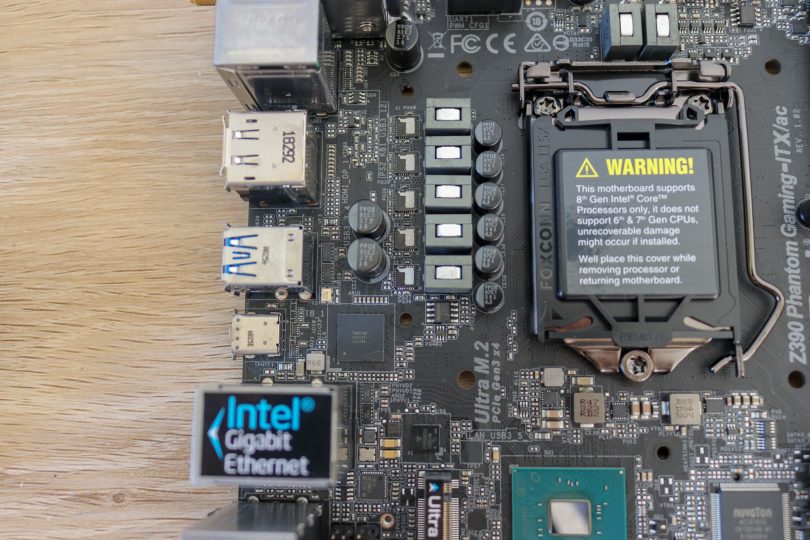 The shinier BGA just above the M.2 slot is a Texas Instrument TPS65982DA (PDF link), a USB Type-C power controller. 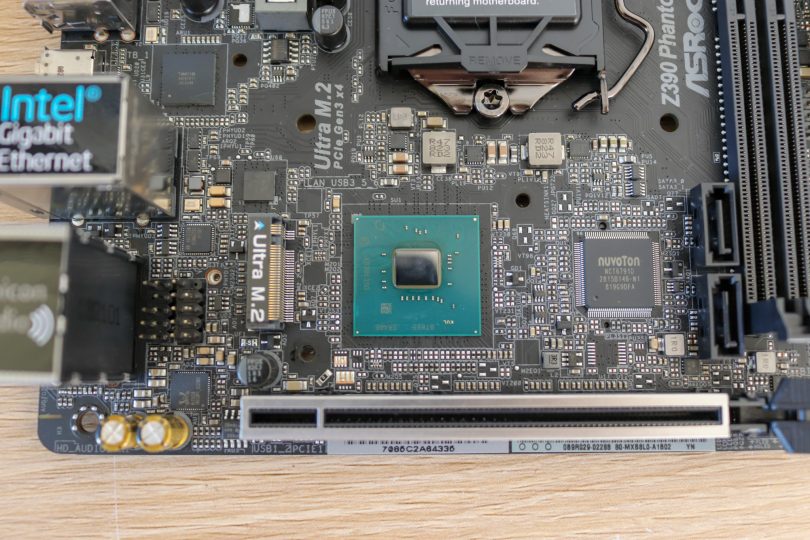 Taking centre stage is a package denoted SR406 – Intel’s Z390 chipset. To the right of this is the Nuvoton NCT6791D, the expected “Super IO” chip.

Whilst the unboxing experience is as per the norm, it’s the experience in the build and use that really defines the product. As usual, the initial installation of components into the board went smoothly, with no cooler conflicts with Noctua NH-L9i I attached. Everything feels robust and of high quality. All I/O had drivers already in Windows 10 – no downloading of drivers was needed to get the initial system working.

Installing my ADATA XPG NVMe SSD was also an interesting experience – the heatsink on the drive meant that it could not be mounted to the combination heatsink assembly on the top of the board. I removed the drive’s heatsink and all went well as to the installation. I have noted a substantial decrease (~20C) in drive temperatures versus the drive’s original heatsink – but I’m not surprised considering the heft of the board’s cooler, versus the thin aluminium piece that came with the drive.

Upgrading the BIOS from P1.10 to the current P1.3 was fraught with terror – the process became stuck 3 times, with only a mains power cycle each time allowing the system to boot. Three times I thought the board was bricked! This was using the UEFI flash utility – I did not attempt to use the Windows based tool. Not great. Thankfully, I managed to get the process finished in the end.

The ASRock Z390 Phantom Gaming-ITX/ac epitomises what should be the target for modern SFF motherboard design – subtle aesthetics, full feature set and great build quality. The board is exactly what I think a high end M-ITX board should be – no flashy G4M3R graphics, garish heatsinks and poor I/O decisions that plague other boards (links are just some of many, many examples). Well done ASRock.

I do have a couple of suggestions for ASRock though – little changes to tip this over the edge from a good product, into a great one.

Can I recommend the ASRock Phantom Gaming-ITX/ac? Notwithstanding the inherent flaws with Intel’s product stacks, the feature set present on this motherboard, for the price it retails at, offers a solid option if you want the best you can get.