ASRock’s H370M-ITX/ac is a highly specced, mid-range board based on Intel’s H370 chipset. Offering near Z370 specs at a slight bump over the price of a B360 board, this new motherboard offers an interesting value proposition. Offering a strong complement of IO, as well as numerous display options from your Intel Coffee Lake integrated graphics, there are many use cases for such a product.

This particular ASRock motherboard offers a great feature set for the dollar, but what makes this motherboard worth your consideration? Let’s find out.

Z vs H vs B vs Q – Intel’s Chipset Confusion

Selling for around US$96 plus shipping at NewEgg.com (at time of writing), the H370M-ITX/ac sits between the Z370 and B360 models, yet closer to the H310 model than the Z370. Confused by the product stack yet? Let’s clarify.

Traditionally, the various PCH prefixes denoted their market segment – Z for enthusiast, B and Q for business, and finally, H for budget mainstream. Generally, the numbering followed this, with the H, B and Q sitting in the bottom and middle, and Z at the high end. I’m excluding the X chipsets here as they are for the HEDT platform, a step above the “mainstream” line.

Let’s chart these and compare. (I have excluded Q360 as I was unable to find solid information!)

Well? First up, H310 is very much the budget platform, with no PCIe 3.0 lanes, Optane, USB 3.1 Gen 2 and the lowest Gen 1 count. But wait, you say, my CPU provides all PCIe 3.0 I need! In quite a few cases, motherboard designers rely on PCH PCIe lanes to enable easier, cleaner trace routing to add in chips – sound, more USB, LAN, etc, as well as M.2 NVMe slots. Having only PCIe 2.0 lanes means any additional IO added to the H310 based boards will be limited to last gen performance. Ew. I guess integrated 802.11ac WiFi is a bonus?

Next, B360. Featuring half the PCIe 3.0 lanes as it’s bigger brothers, this is still a budget segment chip. Aimed at the budget business box, this PCH doesn’t offer vPro, but does offer Intel Management Engine v12, which can be useful in some corporate settings. Integrated WiFi makes an appearance here too.

Another business focused PCH is the next contender, Q370. This is the only 300 series chipset featuring Intel vPro support (although I’d surmise that the upcoming Q360 chipset will have this as well). Apart from this, 24 PCIe 3.0 lanes, tonnes of USB 3.1, and WiFi are present.

To rectify this, Intel is launching a new Z390 chipset – basically Z370 with the USB 3.1 Gen 2 and WiFi added in. However, we’re not sure as yet whether Z390 PCH boards will support all current Coffee Lake processor SKUs, or be limited to new octocore processors, or if the new octocore parts will work in older Z370 or below boards. 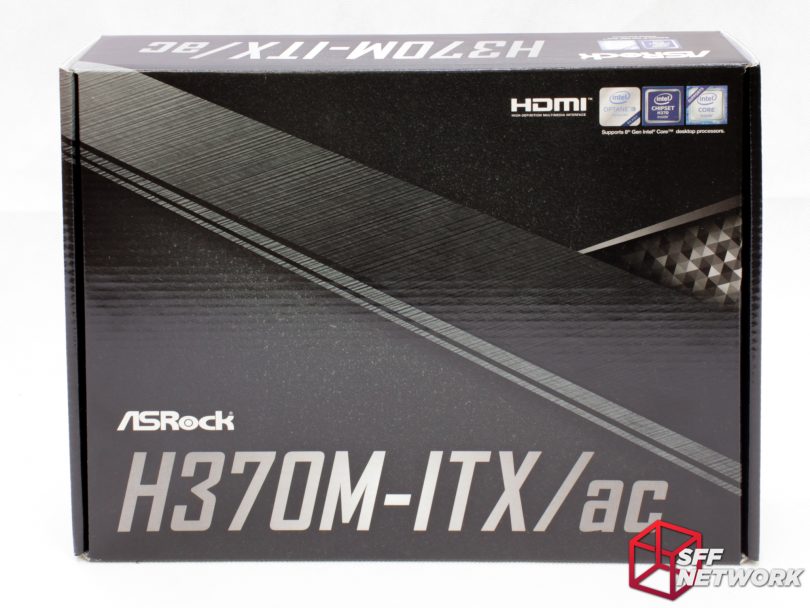 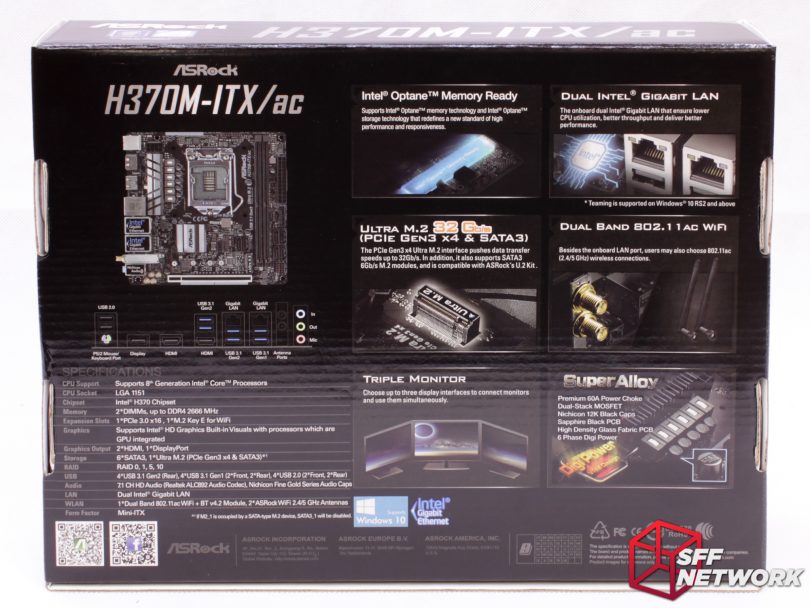 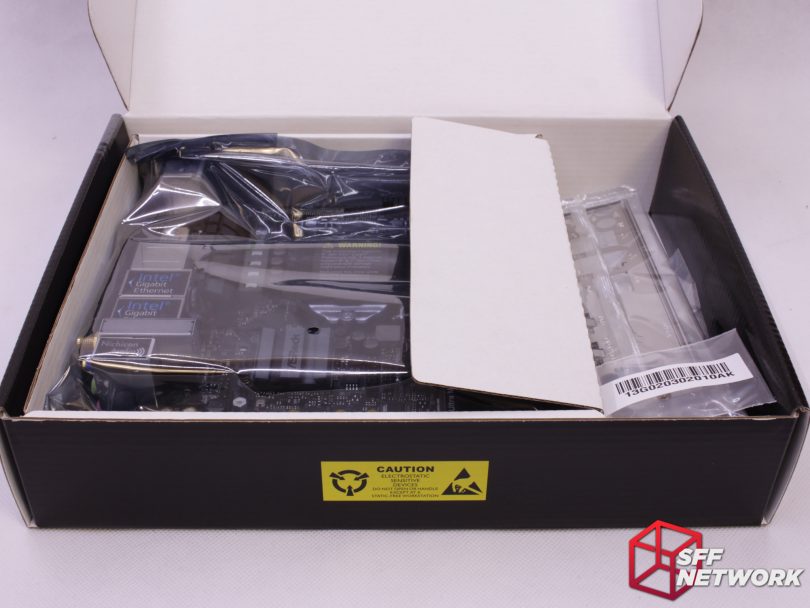 As I mentioned above, the packaging isn’t flashy – this extends to the inside of the box. Just enough protection is provided. 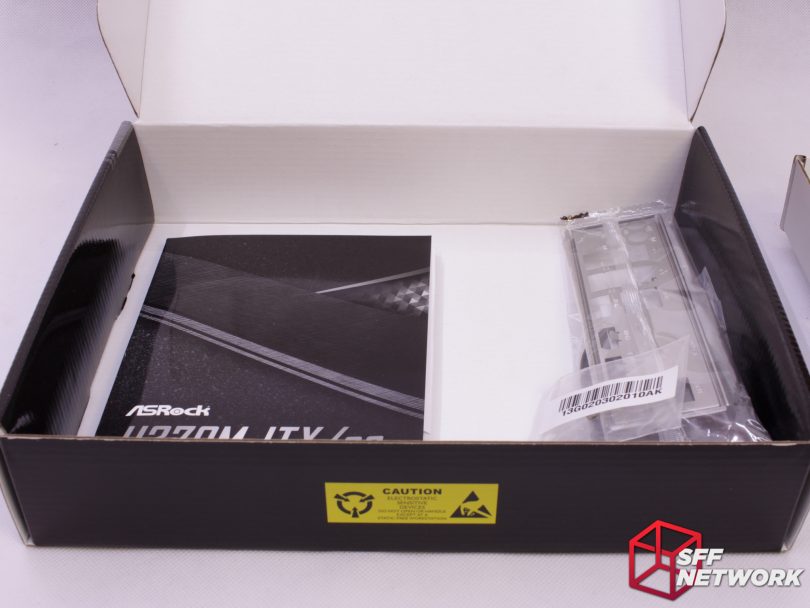 Hiding under the motherboard is a printed manual, as well as the rest of the accessory pack. 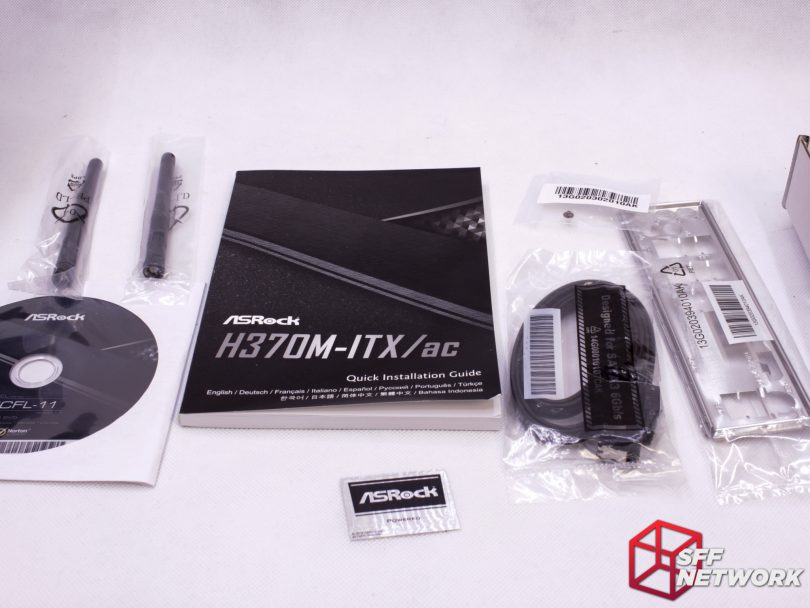 The aforementioned accessory pack includes a pair of WiFi antenna, a driver CD, the manual, a shiny case sticker (glad to see these make a come back!) , a set of SATA cables, and a plain (not flashy) rear IO shield. 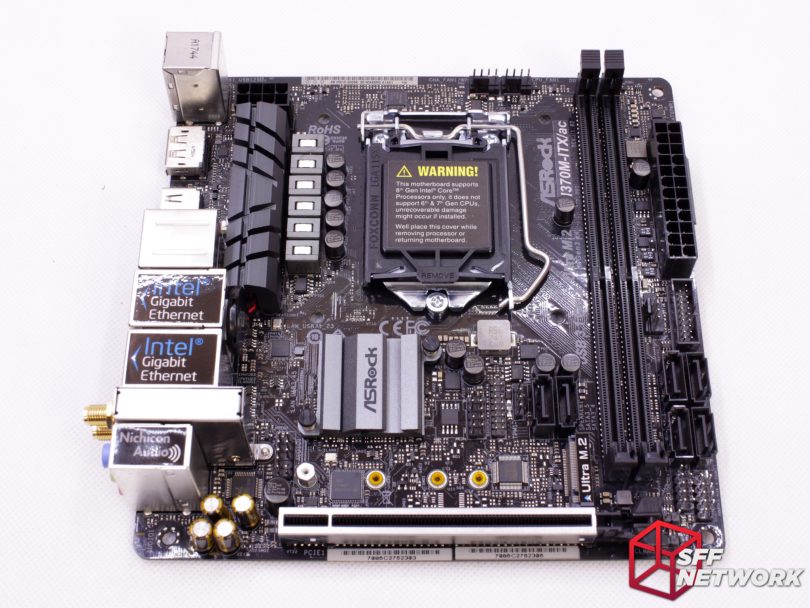 Subtle, sleek, and well laid out. No gamer aesthetic, bright colours or LED lighting. I like this so far. Let’s analyse this in more detail. 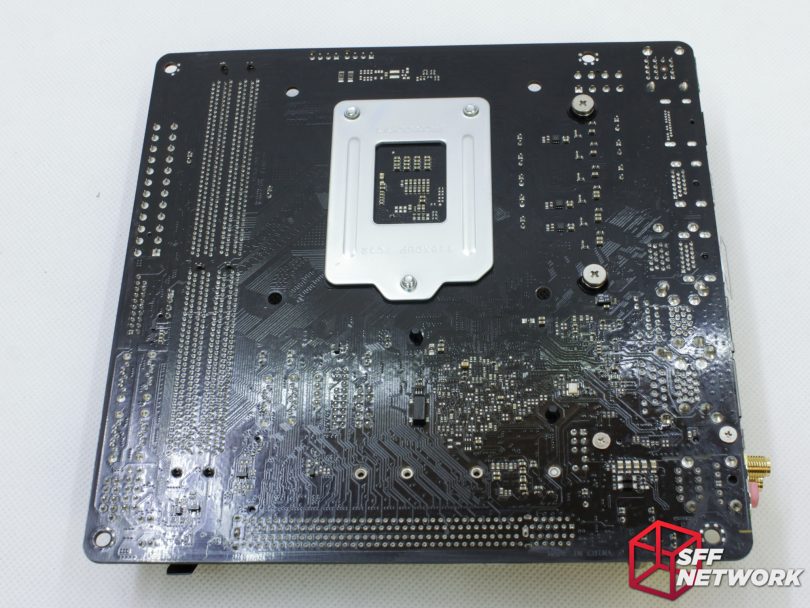 Not much on the back side of the board! This is great news, as we’ve seen some cooler backplates conflict with motherboard components in the past. This setup should be compatible with most cooler backplates, and any that don’t should only need a small amount of modding. 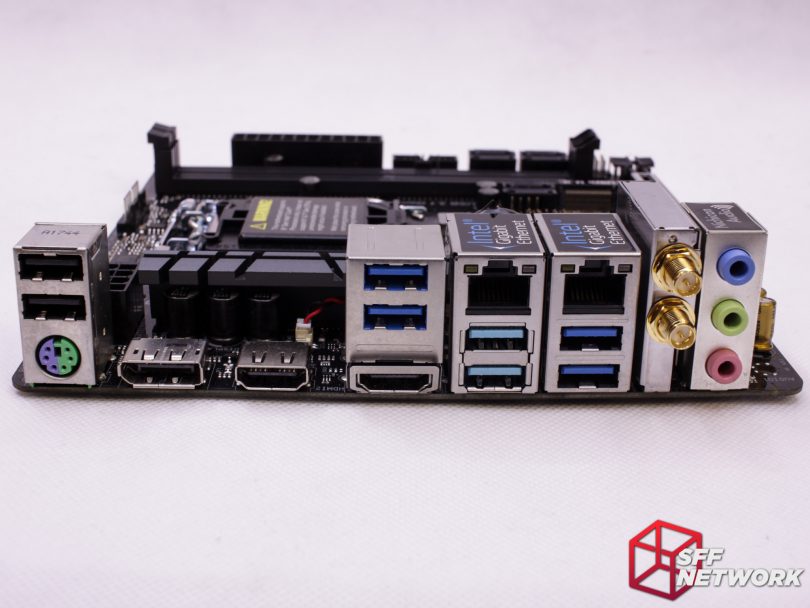 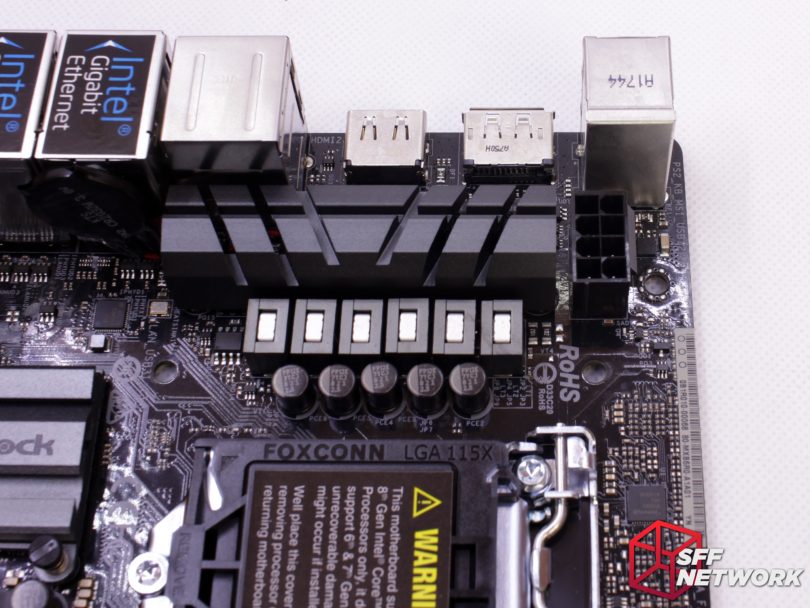 The VRM section is well-implemented, with quality components and a heatsink to keep them cool. Whilst this board isn’t for overclocking (H instead of Z chipset), the heatsink here will mean the power supplying components will stay cooler, meaning a longer lifespan.

However, this is also a side-effect of using a very similar PCB to the Z370M-ITX/ac – an overclocking capable motherboard. Either way, the power phases should be capable of powering, reliably, any supported processor. 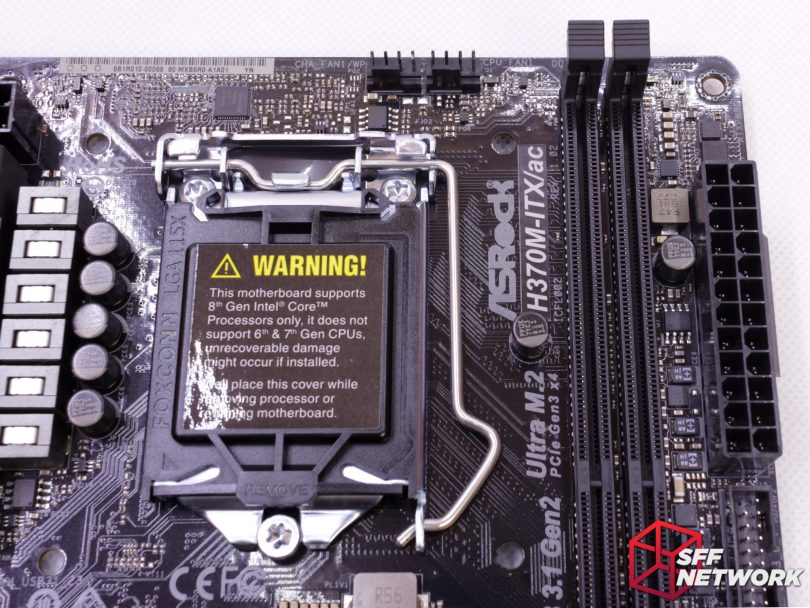 Twin fan connectors for CPU cooling – super handy, and great to see as what is now a standard feature on most ASRock motherboards. These headers can be controlled individually, thankfully. Adequate clearance is available around the CPU socket for cooling – meaning that there’s a very good chance of your cooler fitting, unlike boards of old.

The ATX 24 pin connector sits at the edge of the motherboard, meaning that while the board layout around the CPU is tighter, the cable management in a system with this board should be easier!

And one more thing here, check the note on the CPU socket cover – this is critical information! 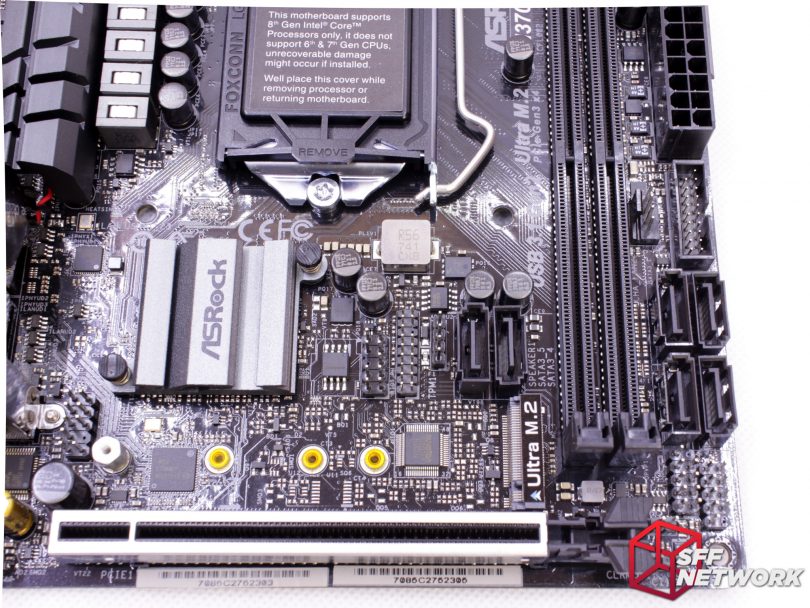 Whilst two of the SATA ports are in a less than ideal spot, four are still available on the outside of the RAM slots, which should be plenty for most M-ITX systems. The M.2 slot is on the top side of the board, making upgrading a lot easier than the traditional underside location. Removing a motherboard just to swap out a M.2 drive is a pain in the butt.

A chassis fan header is hiding between the RAM and USB3 header, and, like both CPU fan headers, is PWM capable. Sitting in the centre of the image are a trio of pin headers – one for BIOS_PH (a communication header for alternate BIOS programming tools), one for the Intel Trusted Platform Module, and finally, a chassis speaker header. 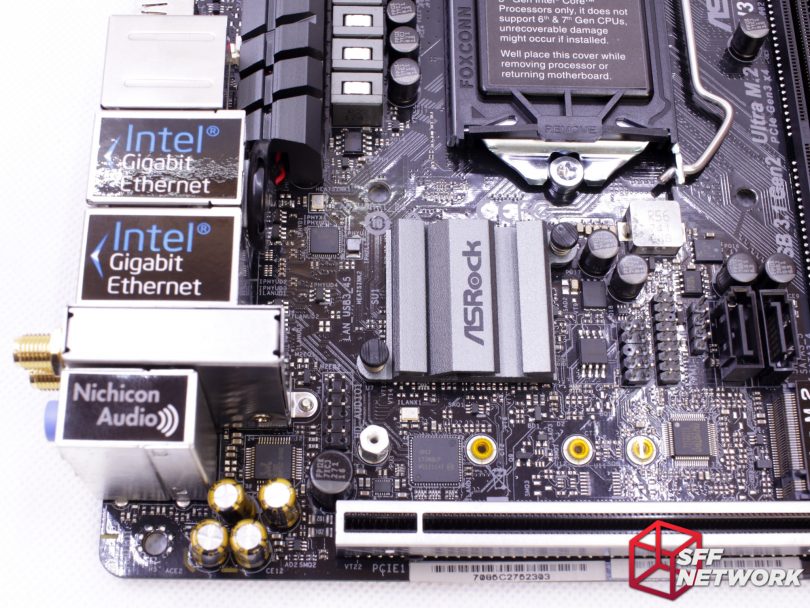 Providing audio to the three 3.5mm jacks is a Realtek ALC892 audio IC, along with Nichicon capacitors (amongst other discrete componentry). The audio here is pretty limited – this isn’t an audiophile or home theatre niche board – the look, feel and loadout of the ASRock H370M-ITX/ac board seems to be orientated more towards workstation, rather than media consumption, use. 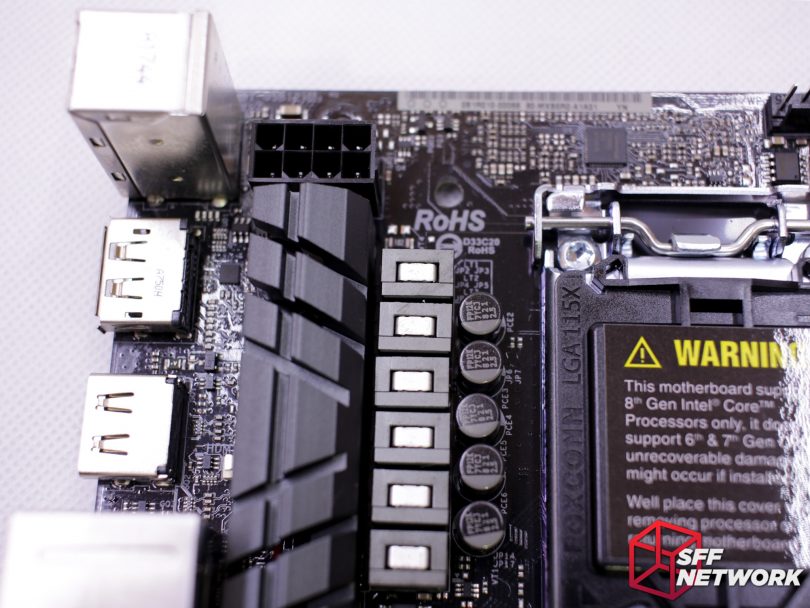 8 pins of CPU power connector means that even the highest power Coffee Lake LGA1151 chip gets it’s fill of those juicy electrons. A complement of all black capacitors keeps the aesthetics clean. We’ll look underneath the VRM heatsink in a few moments. 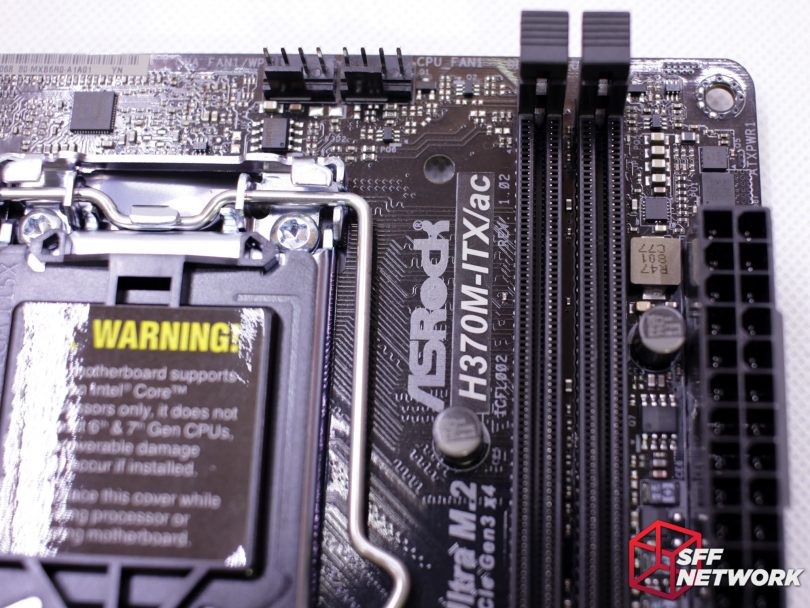 The model name is a sticker, however, fret not as there isn’t some lower (or higher!) spec denotation hiding under here. Yes, it was a pain peeling back this sticker to check. 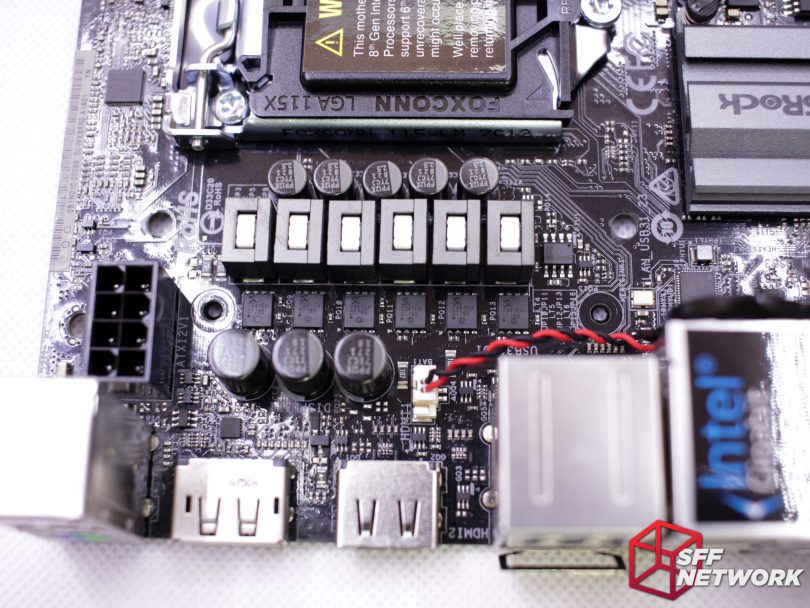 Hiding under the VRM heatsink is a sextet of Sinopower Dual N-Channel Enhancement Mode MOSFETs, namely the SM7341EH (PDF Datasheet link) model. This MOSFET is rated for 24A and 44Amps on channels 1 and 2 respectively, meeting ASRock’s marketing claim of 60A in the VRM stages (albeit the 60A claim is made on the chokes, not the MOSFETs). 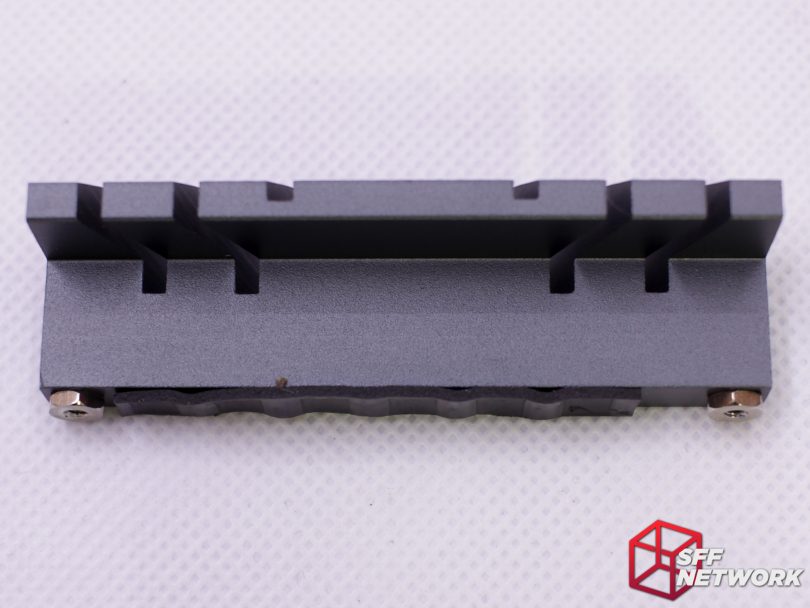 A thin thermal pad and chunky heatsink is what we like to see – there have been issues in the past here.

As is to be expected with a modern motherboard, the H370M-ITX/ac left me feeling confident in the long term stability and reliability of a workstation level system built on the motherboard – which is rather critical! When it comes to experience with a motherboard these days, no news is good news.

ASRock has turned in a commendable effort in creating a board that offers solid features in light of the absurdly cramped market segment it sits in. Clean aesthetics, smart port choices (no DVI, VGA or the like are to be found on the rear panel!) and a no-fuss included bundle means that the H370M-ITX/ac offers solid value for your PC buying dollar.

I had no issues with the board in the building or using of the motherboard, with no conflicts, physical or software, to be found.

Whilst it could be argued that AMD currently has 5 chipsets extant on the market (X470, B450, X370, B350, A320), only two are current generation, and backwards compatibility is included.

This isn’t ASRock’s fault, however, it just makes choosing this board over the H310, B360 or Z370 sister products a difficult decision. We’re now reduced to picking between tens of boards from ASRock and contemporaries within a tiny price bracket. Gone are the days of easy, standout choices based on feature implementation. Now the fight is over RGB and aesthetics, it seems.

ASRock’s product stack here makes sense, if we agree with Intel’s step-wise feature implementation on the chipsets. Each chipset has a board dedicated to it, and each board is different to take advantage of the increased feature set. Looking at ASRock’s H370M-ITX/ac left me with two questions;

“Why are we still paying a hefty premium (US$40 at time of writing, and not to mention the price premium on “K” series processors) just to allow you to overclock your processor, with no real other added value?”