Micro-ATX, the oft-ignored form factor, stuck between the expandability (and HUUUUGEness) of ATX and the size of M-ITX. For generations, the M-ATX market segment has been filled with mediocre boards from a cursory glance, leaving folks to go to one extreme or the other instead. In fact, I have mused publicly in the past on this, a sad perspective of the middle child of the PC world.

ASRock has long been a stalwart of high density computing options, with the DeskMini range, insane Mini-ITX boards and the like – I was intrigued to see what their B450M Pro4 has to offer a modern consumer, shopping in the low to mid price range – can we get the same level of density on a cheaper board? Let’s see. 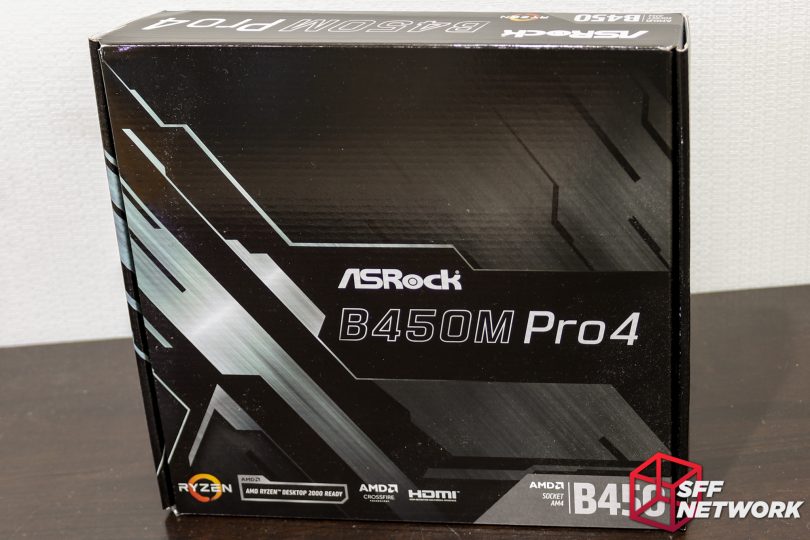 Reminiscent of the non-Fatal1ty branded boxes from ASRock, the B450M Pro4 comes in a subtle box, clean of any marketing gimmickry. AMD 2000 series, yup, this is a second gen Ryzen board! 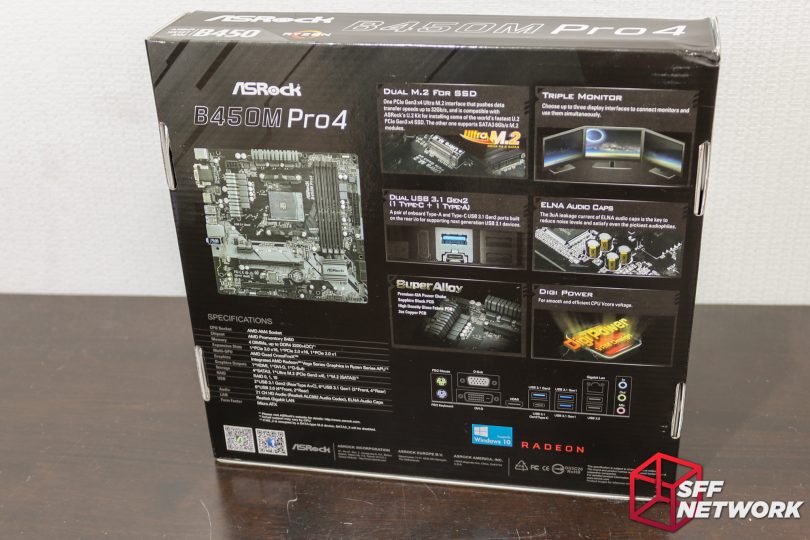 The rear of the box, as is expected, shows off many of the features of the motherboard – Dual M.2, dual USB3.1 Gen 1, Triple Monitor, and the like. 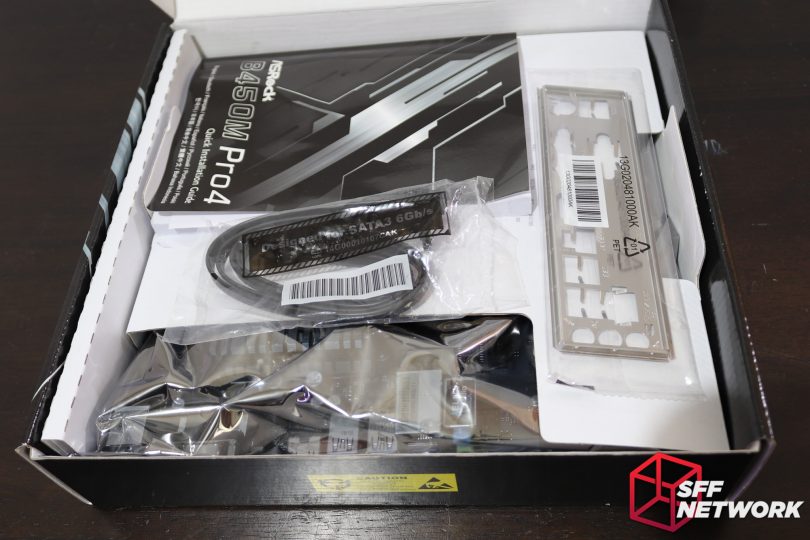 The accessory kit is minimal, but it’s everything you need to get this beasty running – an IO shield, SATA cables, driver CDs.. (yes, really) and a manual. 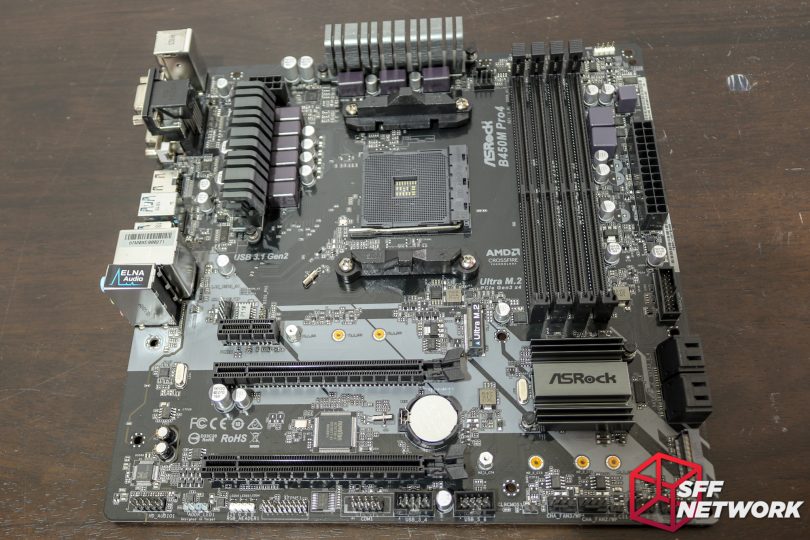 Whilst not a high end Fatal1ty, ROG, Phantom Gaming, Ultra Durable, or whatever, board, the ASRock B450M Pro 4 is a heavily specced board,  with quad memory slots, dual PCIe x16 slots (albeit, the bottom runs in x4 mode. Also, the top slot runs x8 mode if using a Raven Ridge APU). Dual bank VRMs differentiate the M-ATX platform from the higher end ITX boards – spoiler alert – the extra VRMs helps with overclocking! 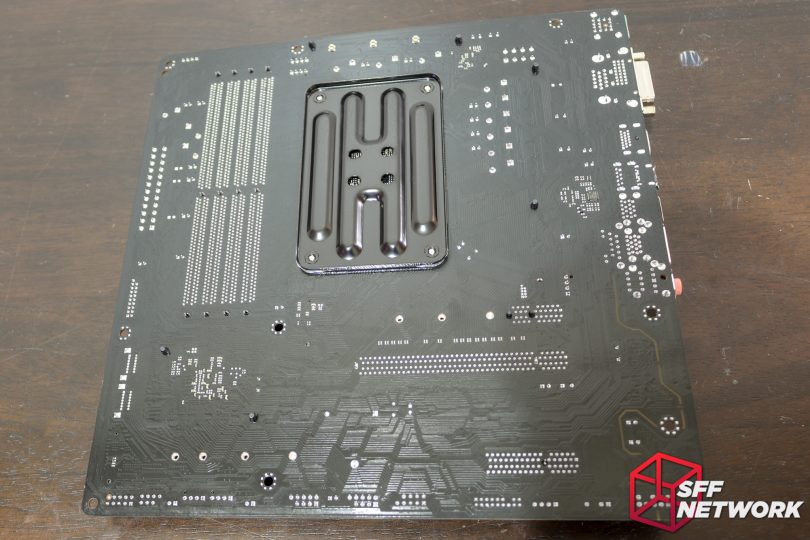 The rear IO features, left to right and top to bottom; 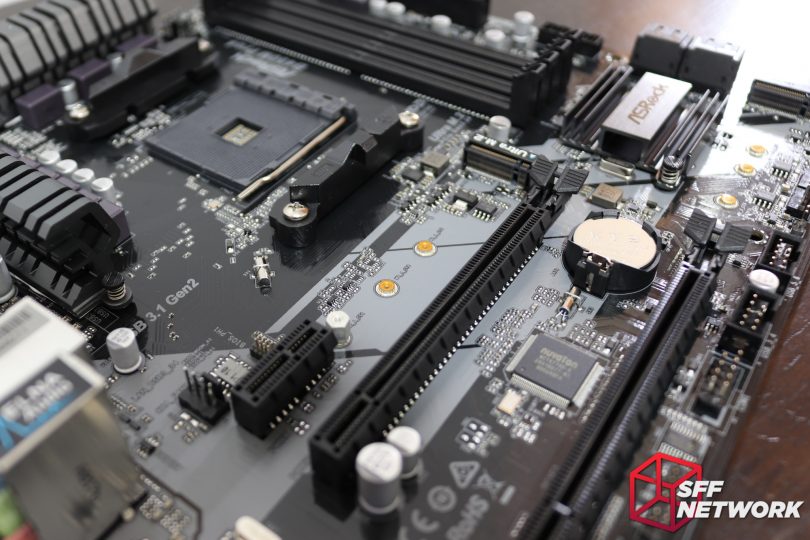 A plethora of expansions – who needs ATX? PCIe x1, x16, two M.2 and the second x16 physical (x4 electrical) slots. The slot spacing is such that a dual slot GPU won’t block the use of any of the other slots, nice.

The giant Nuvoton chip? It’s a NCT6779D-R, a highly integrated chip doing temperature, fan speed, and many, many other system monitoring jobs. A heavy lifter with a heavy amount of pins for a QFP chip. 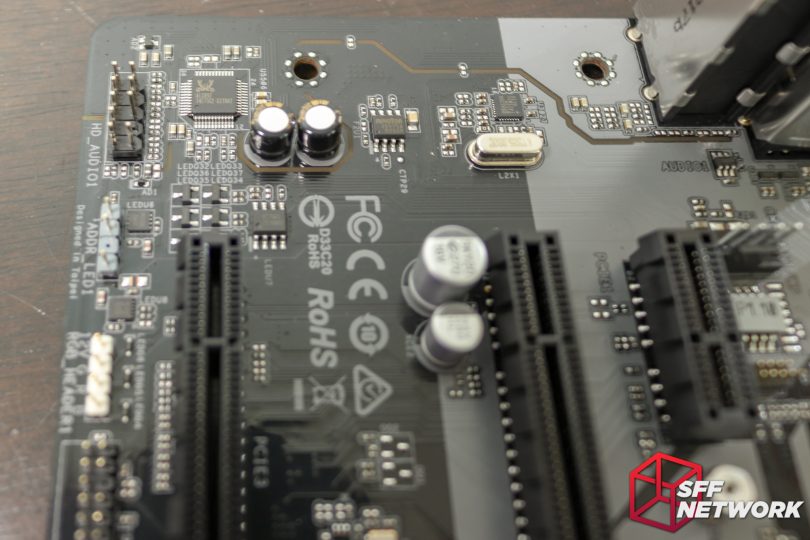 A separated audio section, par for the course these days. The Realtek ALC892 chip sits to the left here, next to the front panel audio header.

To the right of the twin capacitors is a Nuvoton 3947SA, a fan controller IC.

On the expansion side of this, hugging the crystal package tightly, is the Realtek RTL8111H LAN chip. Whilst it would have been nice to see a higher end NIC on this board – say, an Intel solution – there is room in the expansion slots to throw in whatever network card you want. Quad 10GbE anyone? 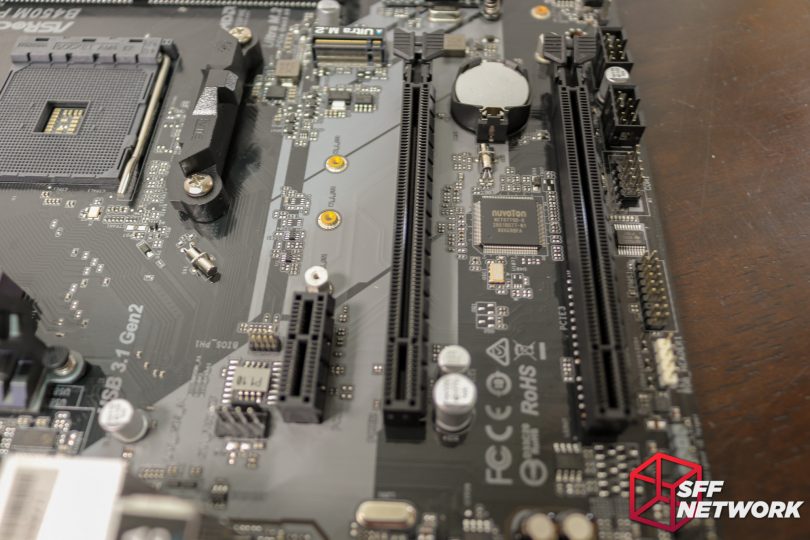 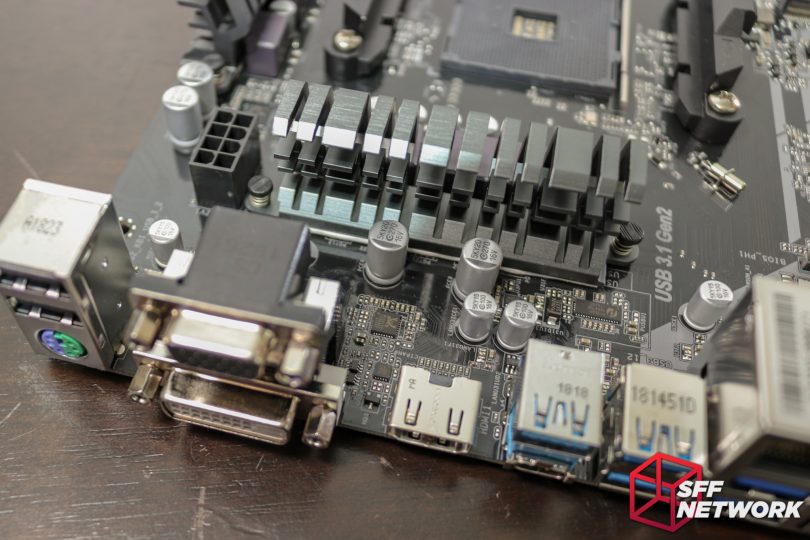 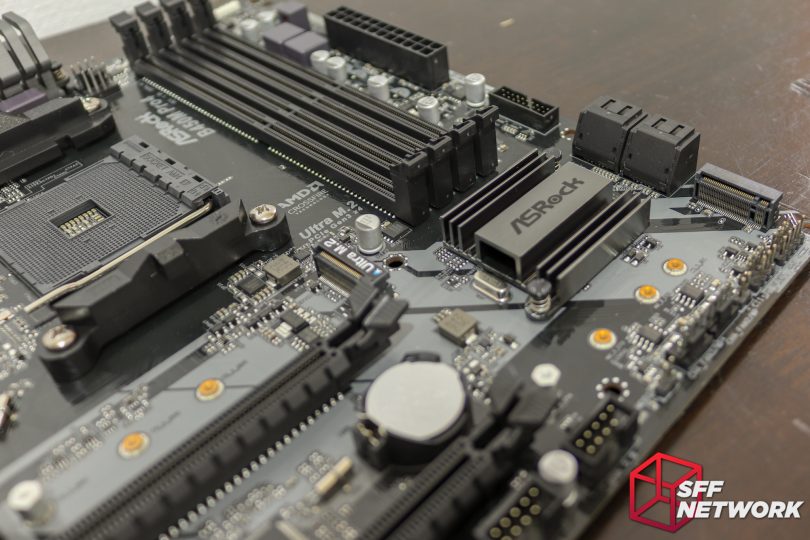 The AMD B450 chipset hides under the traditional ASRock style heatsink. If it works, it works! To the bottom of this lies the second M.2 slot, this time a SATA only variant, which steal control from the 4th onboard SATA port if in use. 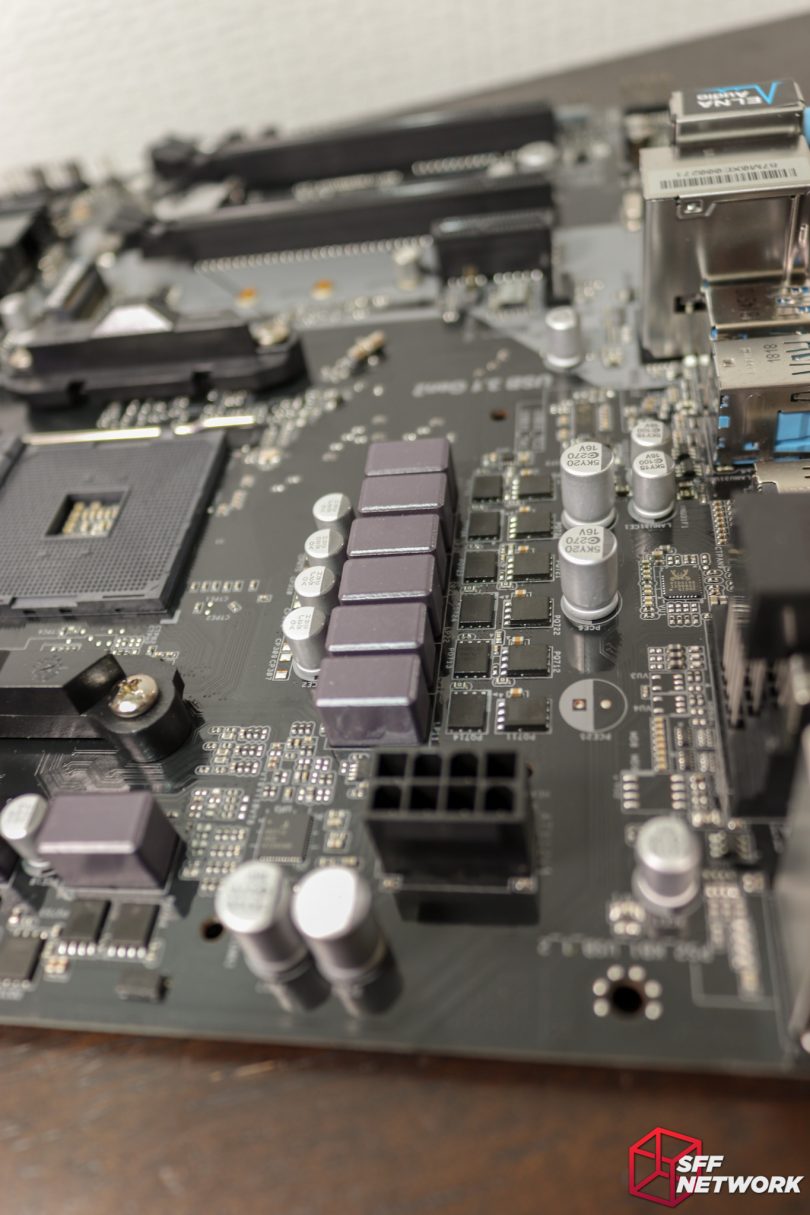 Hiding under the VRM heatsinks is a solid power section, split between the left and top side of the CPU socket. Hosting twice the MOSFETs usually given on a comparable M-ITX board, this board offers some serious overclocking chops. Keep in mind that AMD doesn’t limit overclocking to only a certain processor on a certain chipset board – all is unlocked and rearing to go. 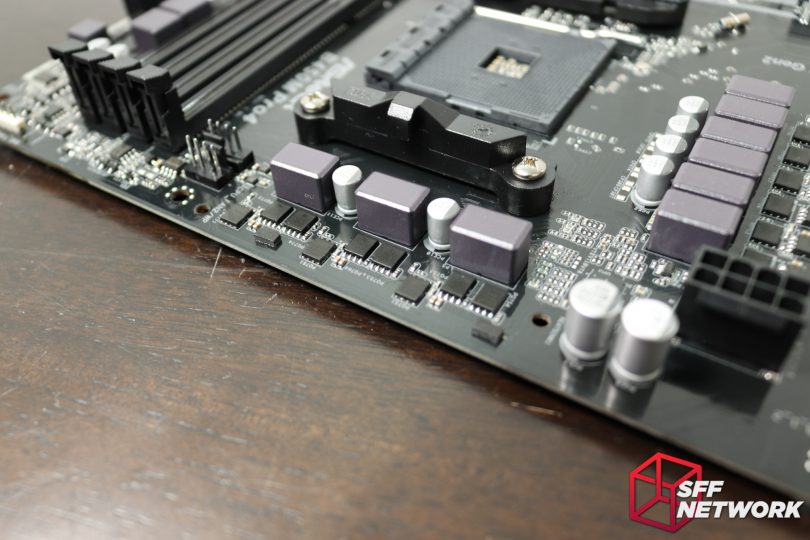 The other set of VRMs revealed. These Niko Sem MOSFETs are of the PZ09030BK variety, of which a datasheet was not find-able at time of publishing. These are partnered with Niko Sem PK618BA units. 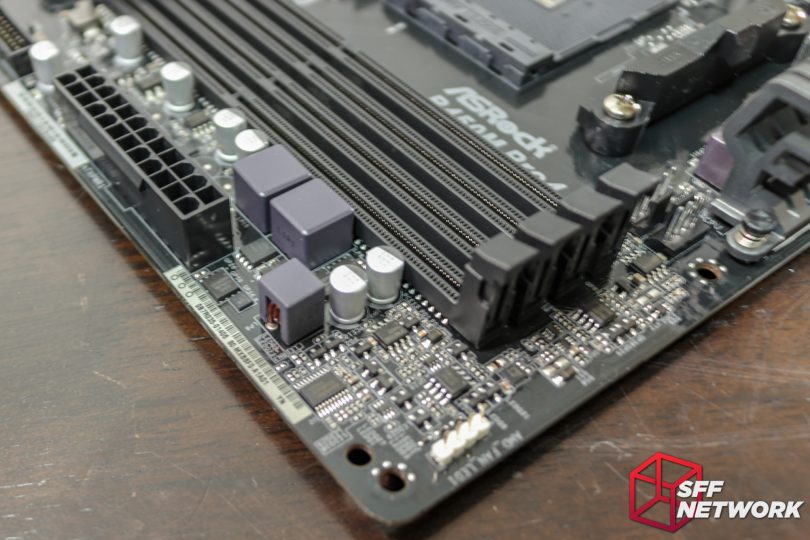 Near the quad memory slots lies an RGB header (of course), and a whooooooole bunch of input power circuitry. More board space means better power delivery management and control. 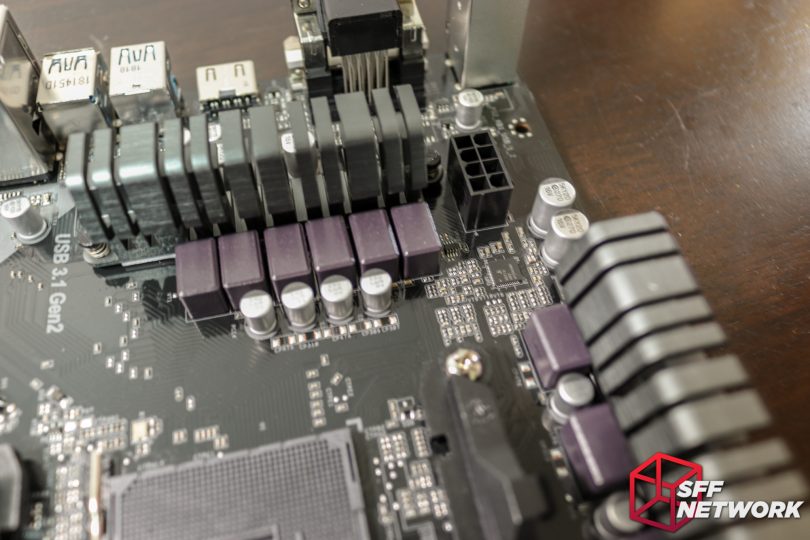 8 pin power input, but of course. Whilst the board officially supports up to 105w processors, it has much, much more to give in the overclocking – where this 8 pin juice is really needed.

To the memory, once again, I thought we had a hard limit of 3600MHz, except on one board – the Gigabyte AB350N Gaming-WiFi, where we hit 3724MHz. Well, I managed to match this record on the ASRock B450 board, woohoo!

Apart from the fun of overclocking, the motherboard was flawless in use, with rock solid performance outside of the bleeding edge overclocked states, which is to be expected. When the system did crash through overclocking, the recovery was quick and flawless.

M-ATX, a format I deemed to be dying some time back, seems to be making a comeback, if the ASRock B450M Pro4 is anything to go by. The board offers a solid featureset at a great price, with excellent component compatibility and limited legacy (No PCI, yay!).

What I’ve seen in this product is a mid (albeit sub US$100) range motherboard that supports more expansion than a M-ITX board, without caving to the demon that is ATX. A mid range, mid-sized, mid-priced motherboard. I highly recommend the ASRock B450M Pro4 to anyone out there looking for a M-ATX board for their next build – unless you are looking for high end audio (easily solved with a sound card or preferably, a USB DAC), this is a great choice.