In a SFF Network exclusive, we take a took at a early SilverStone prototype of a 450W fanless (you read that right, completely passively cooled) SFX-L power supply here at Computex 2017!

The prototype arrived at the SilverStone booth on the show floor hot off a flight from the factory in China, just as we were starting to wrap up our visit with Tony Ou, SilverStone’s marketing manager. It was so last minute, in fact, that Tony didn’t even know it was going to be here! 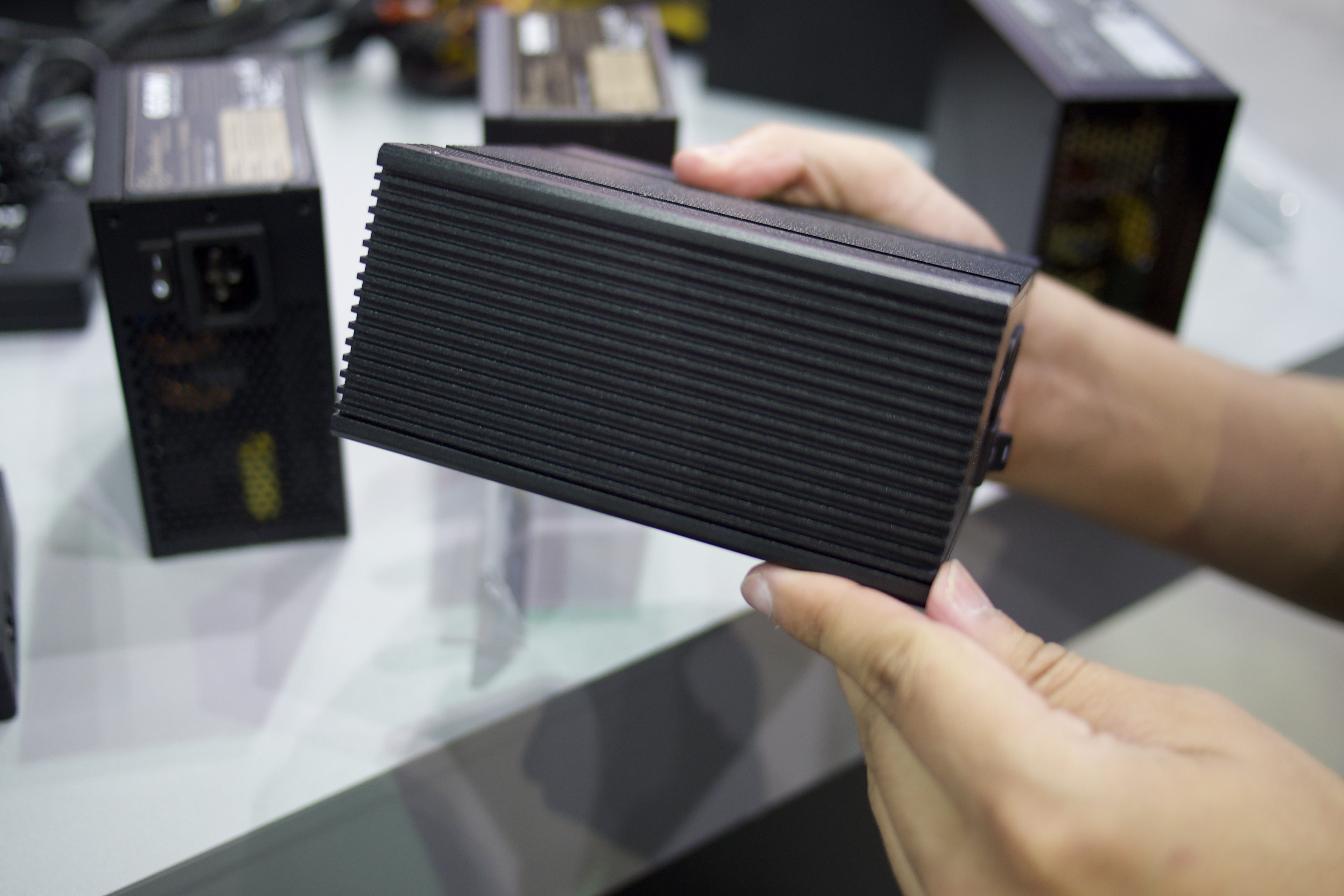 Before we begin gushing, though, let’s talk specs. This new unit conforms to the SFX-L form factor of 63.5mm x 125mm x 130mm (HxWxD). For reference, SFX-L is extended in depth from the standard SFX depth of 100mm to (until now) fit a slim 120mm fan.

As expected for a fanless PSU, there is no fan, as instead the unit relies on extruded anodized aluminum finned heatsinks for cooling the sides, top, and bottom. According to the SilverStone’s PSU product manager (who was also present), the current rated operating temperature is 40°C – though please treat all these specs as subject to change considering the early state of development! 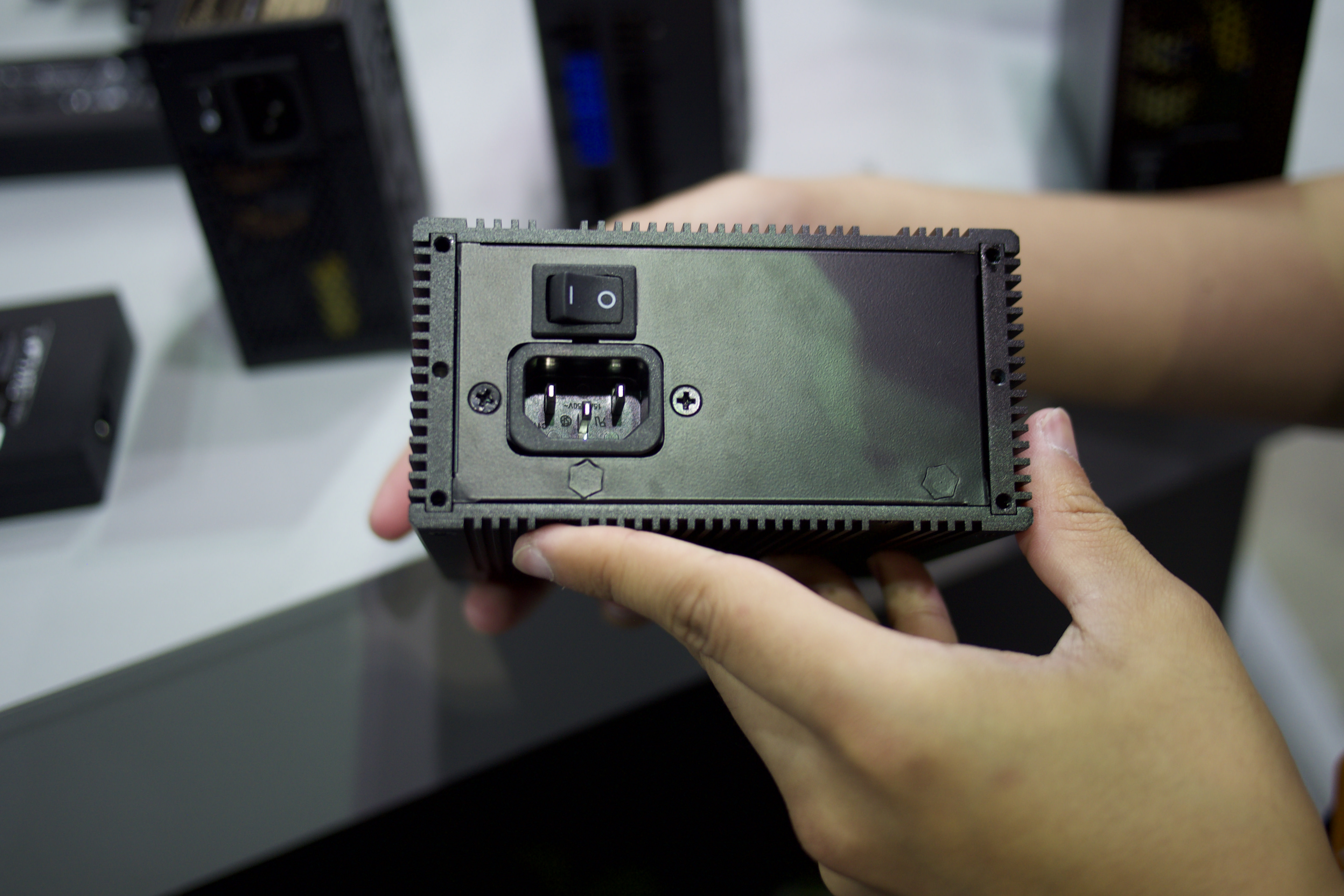 The rear of the prototype is solid – other than the C14 inlet for the AC power and a power switch – but SilverStone has indicated that they will likely have to put some vents on this side for additional cooling. While compromises must be made to handle 450W of power with no active cooling in the diminutive SFX-L form factor, I hope that SilverStone can tweak the design enough to keep the current solid back. Having the whole unit be completely solid on all sides is aesthetically very impressive, to say the least. More practically, though, the back is also a prime candidate for providing a home for the specifications label, as otherwise one of the sides will need the fins flattened out to house the sticker.

(I did ask if the label could be omitted for aesthetic reasons, but pesky safety regulations require it. Oh well.) 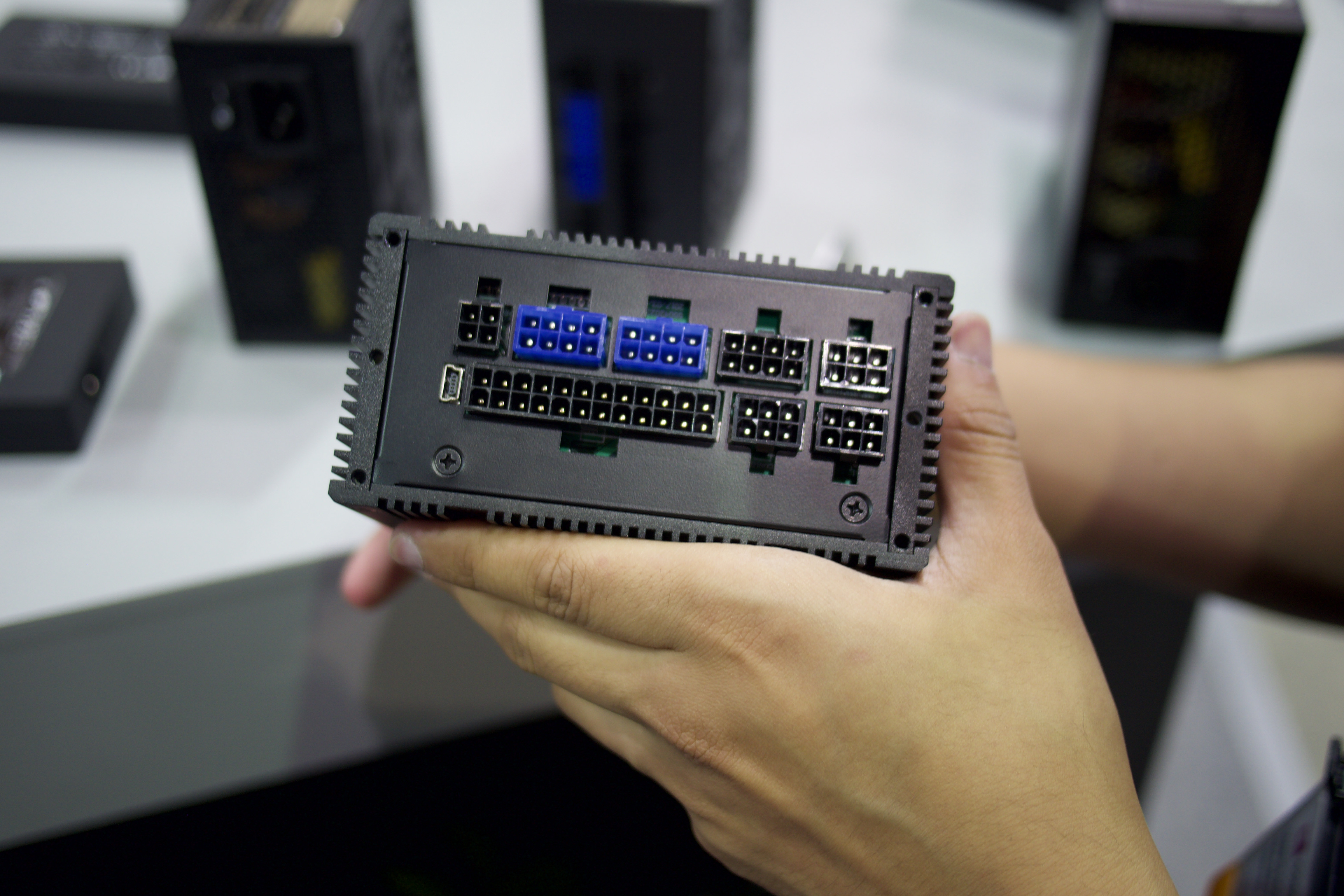 Turning to the other side, the modular connector layout may look familiar, and that’s because this new unit is based off of the same Enhance platform as the SilverStone SX800-LTI (which we reviewed, and quite liked), with the power supply simply being down-rated to meet thermal requirement. As such, this new unnamed unit will definitely be at least 80 PLUS Platinum-rated for efficiency, with individual units bordering on Titanium efficiency due to typical sample variance.

Edit: In fact, the SX800-LTI platform has been split into four sections, and each PCB is attached to one of the aluminum sides for heatsinking.

Eagle-eyed readers may have already noticed a new addition over what’s present on the 800W though: a Mini-USB port. When we inquired, it turns out that the port something they’re experimenting with, and would allow for full digital monitoring of the PSU. So this could potentially report (via a software package of some sort) specs like internal temperatures, current power draw, voltages, etc., in real time.

This new feature is very much in flux, though, and may not make it to production. One concern expressed by SilverStone regarding it’s inclusion is that, on a fanless PSU, the high internal temperatures that would be reported out by digital monitoring may scare off users who are used to the operating temperatures of traditionally-sized power supplies. And, of course, there are other design, engineering and cost challenges to navigate as well. 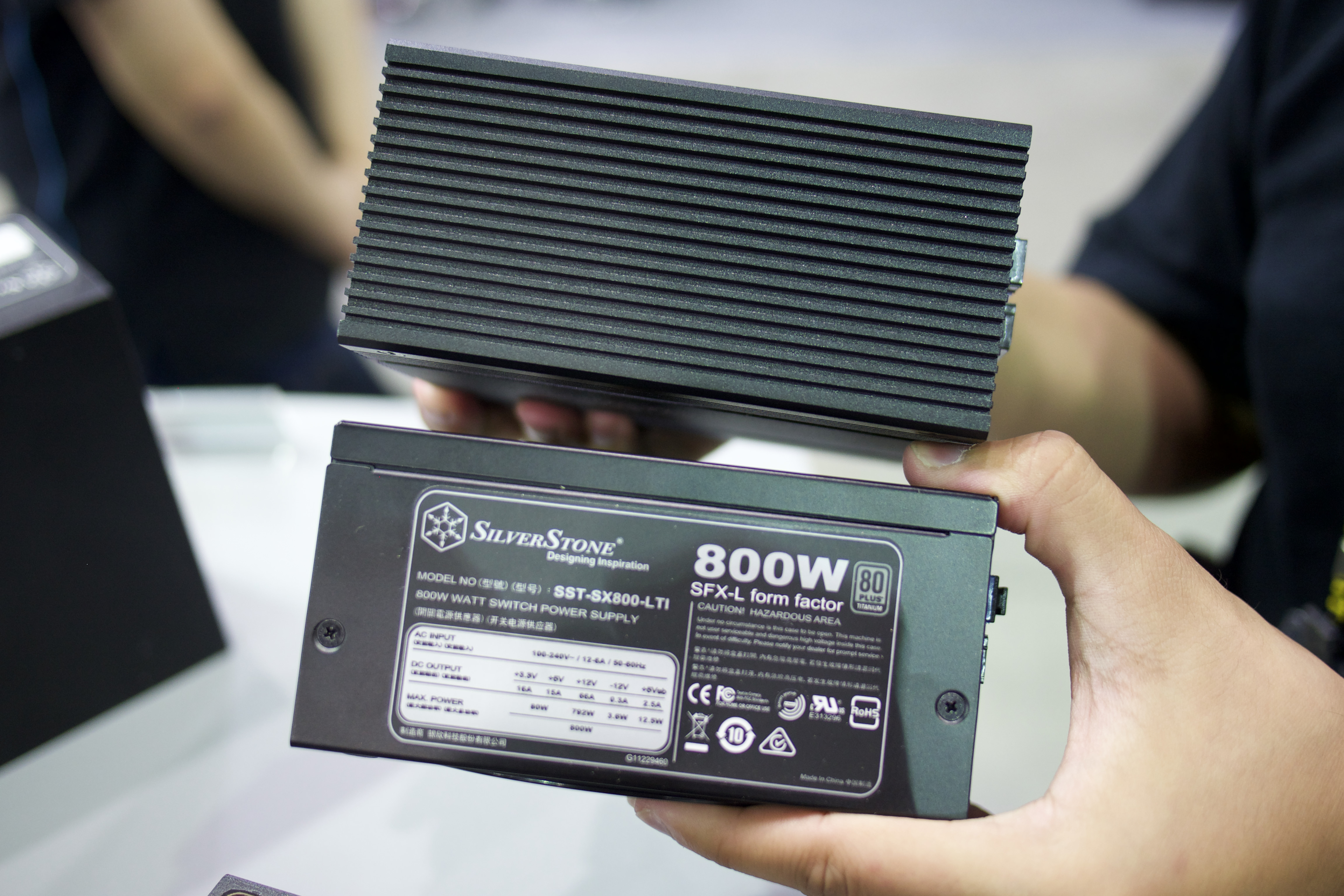 After some prolonged discussion with Tony, he did mention to us that SilverStone had originally wanted to hit 500W for this unit, but that the cooling requirements forced them to go a bit lower. 450W is still more than sufficient for even pretty beefy SFF rigs, however, and I fully intend to use one of these for a personal X299/X370 system combined with a HBM 2 card, for example.

A product like this is even more niche than the niche SFX/SFX-L units SilverStone currently has though, so please let us know in the forum thread if you’re interested in this and what you intend to use it for!

Finally, as for release date, we hope we’ve made it clear that this is still very early in development. Even so, Tony told us that we should expect this unit to be available to buy sometime next year. Still, given that the SX650-G and SX500-G (comparatively simple units) have been delayed several times due to fine-tuning and subsequent recertification, we won’t hold him to it.

Price is also not decided, which is no surprise since they haven’t even decided on a name (or even whether it should be part of the SX or Nightjar product lines!), but Tony said it would be comparable to the SX800-LTI despite the much lower wattage due to the extra engineering involved.

Edit: It now appears that this will end up in the Nightjar line to emphasize the lack of a fan, with the model number NJ450-SXL.

A big thanks to Tony and the rest of the SilverStone team who talked with us at the booth!

June 9 2017 update: Added some clarification on platform and product line.