Streaking into first place with the most SFF boards on offer at launch, Gigabyte brings it’s breadth of options to the market. With so many options, surely there’s one here for everyone? Maybe? 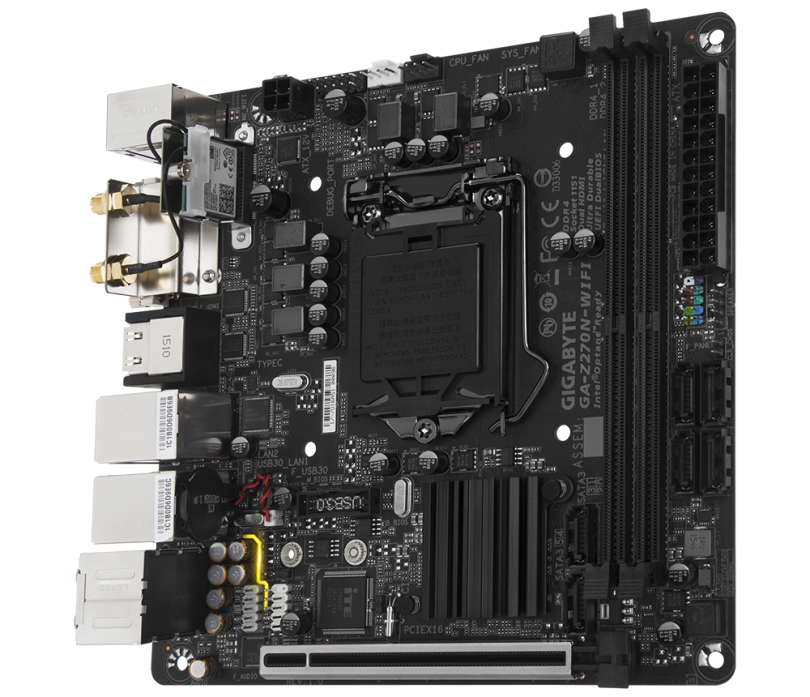 While Kaby Lake is fairly disappointing as far as CPU performance improvements is concerned, I’m very appreciative that the new generation of boards that are launching with it are trending towards a more subdued, monochrome color scheme compared to the often gaudy designs of previous gens.

The GA-Z270N-WIFI here looks to be a solid Mini-ITX board from Gigabyte, with 2x PWM-capable fan headers (including the chassis header according to the manual) and new fan control software, PCIe 3.0 x4 M.2 SSD slot (only one though), 802.11ac M.2 wireless card, Dual Intel Gigabit NICs, Ultra Durable™ PCIe Armor slot, and premium audio.

There is a USB Type-C port on the rear IO but it is a USB 3.1 Gen 1 port, aka USB 3.0. So getting Thunderbolt 3 support through a BIOS update is not happening on this board

I’m very disappointed to see the USB 3.0 header located right under the CPU socket, as I mentioned in the USB 3.1 header post, the USB 3.0 header is difficult to work with and with it in such close proximity to the heatsink I see “fun” times ahead for anyone using this board and a large air cooler. There is also a distinct lack of VRM heatsinks, but other than those two things the general layout looks good. 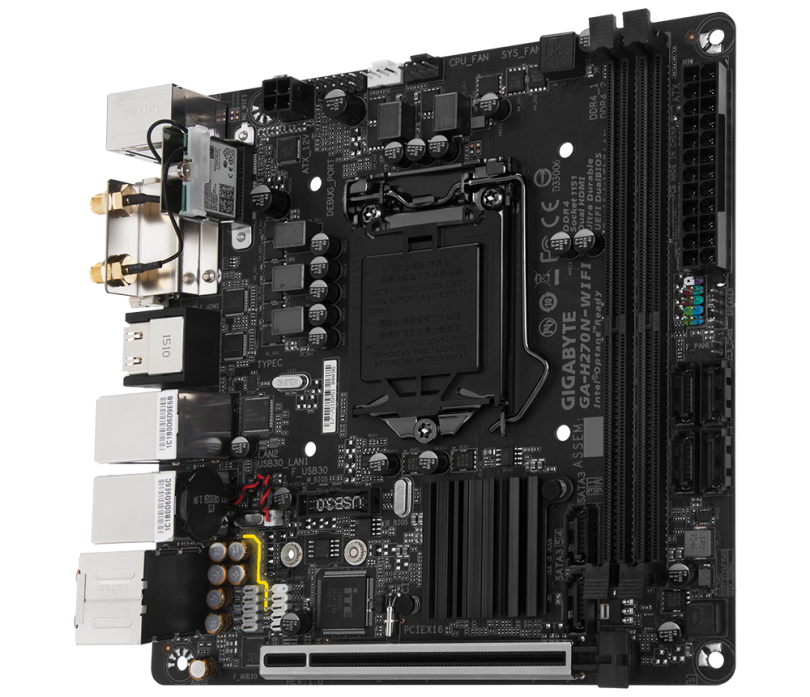 Basically a H270 version of the above. This seems to be a trend with other manufacturers also so I’m beginning to suspect Intel is charging quite a premium for the Z270 chipset since apparently it’s worthwhile to have a motherboard that’s exactly the same other than swapping out the PCH. 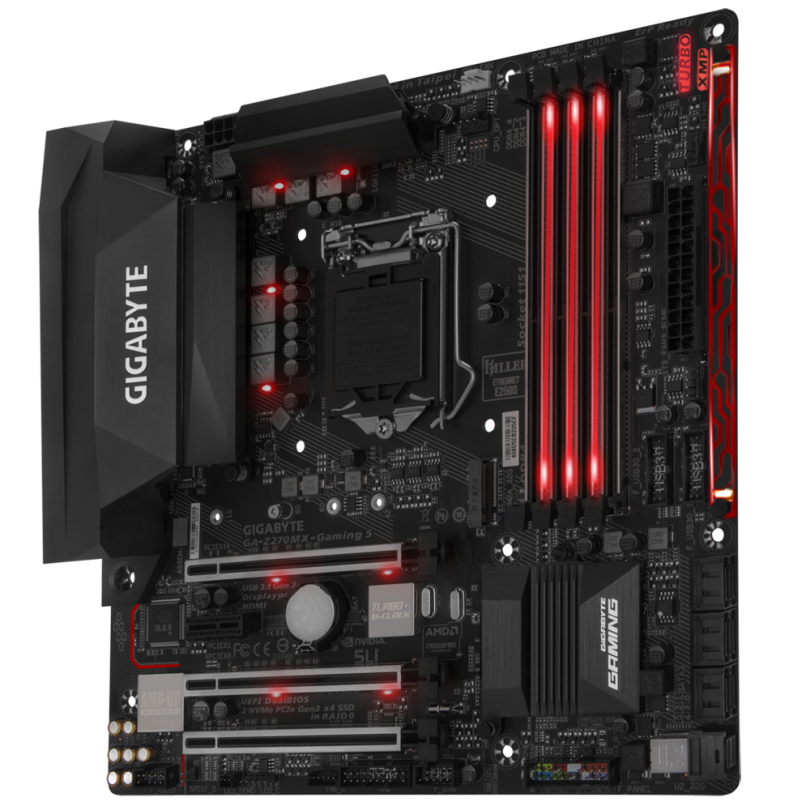 The GA-Z270MX-Gaming 5 looks to be quite a beast of a microATX board. If you look closely at the above picture you can make out several LEDs, but fear not, they are RGB so you’re not suck with just red! Cleverly, the accent strip on the right edge of the board is an edge-lit piece of colored plastic and the board will come with several different colors to match the color scheme of the build.

There are 5 fan headers in total (including CPU) and they are all PWM-controllable. Other features include USB 3.1 Type-C and Type-A (ASMedia controller though so no Thunderbolt) on the rear IO, 1x M.2 PCIe 3.0 x4, 1x U.2, HDMI 2.0, Killer NIC, USB DAC-UP 2 ports for power hungry USB DACs, armored PCIe and RAM slots, and more.

SLI and CrossFire is supported, though only with the top two x16 slots running in x8/x8, because the bottom slot is x4 only.

I’d rather have seen dual M.2 instead of having U.2 but I’m really liking this board from what we’re seeing on the product page and it looks like Gigabyte has finally addressed the fan header issue with their boards where they would have 4-pin headers but only the CPU header could actually do PWM. As a noise freak that was one of my biggest complaints about Gigabyte motherboards so now I’ll have to seriously look at their boards again. 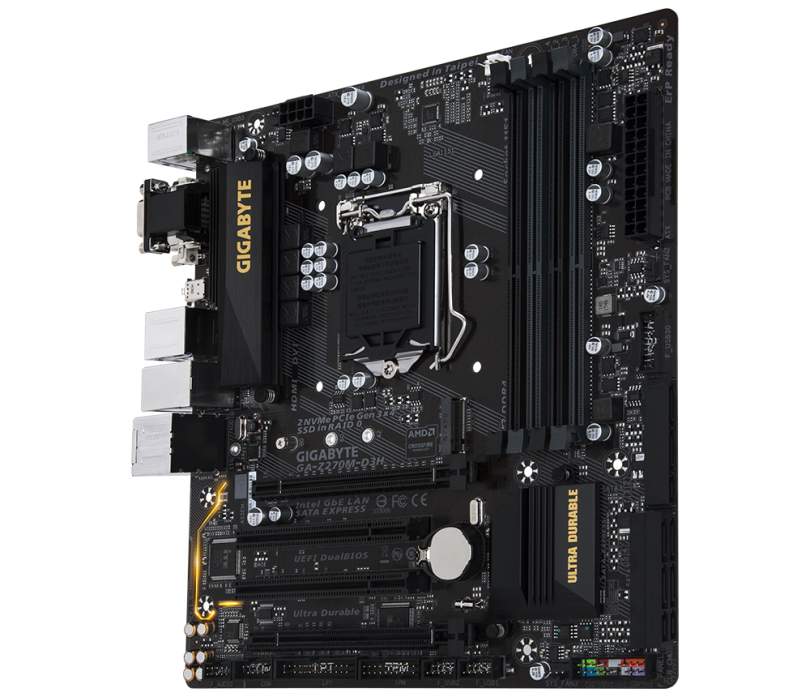 Moving down the product stack, we have the entry-level Z270 mATX board. It drops most of the cool features from the Gaming 5, so no SLI, USB 3.1, U.2, RGB, etc. And annoyingly it gains two PCI slots, which is a disturbing trend on these lower-end board this generation for some reason. 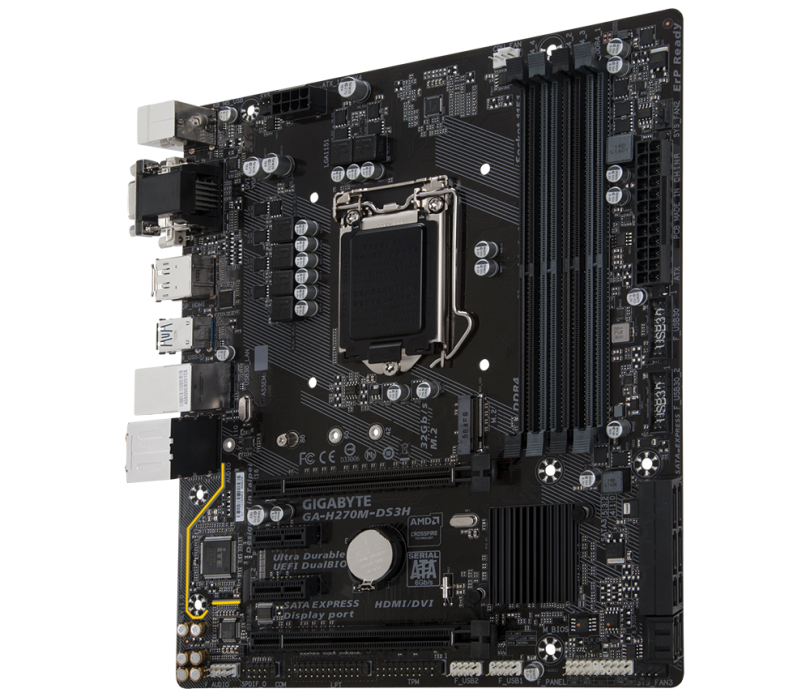 The GA-H270M-DS3H is based on the above board but surprisingly it exchanges the PCI slots for two PCIe x1, and why the H270 has PCIe x1 while the Z270 has PCI is beyond me. It also trades 1 SATA Express connector for a second USB 3.0 header. Honestly unless you absolutely need the Z270 this seems like the much better board. 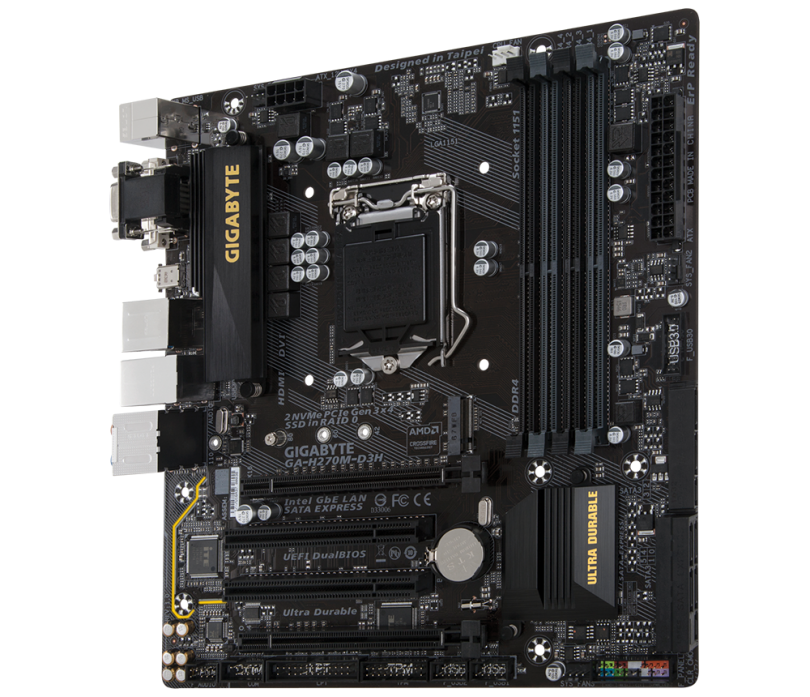 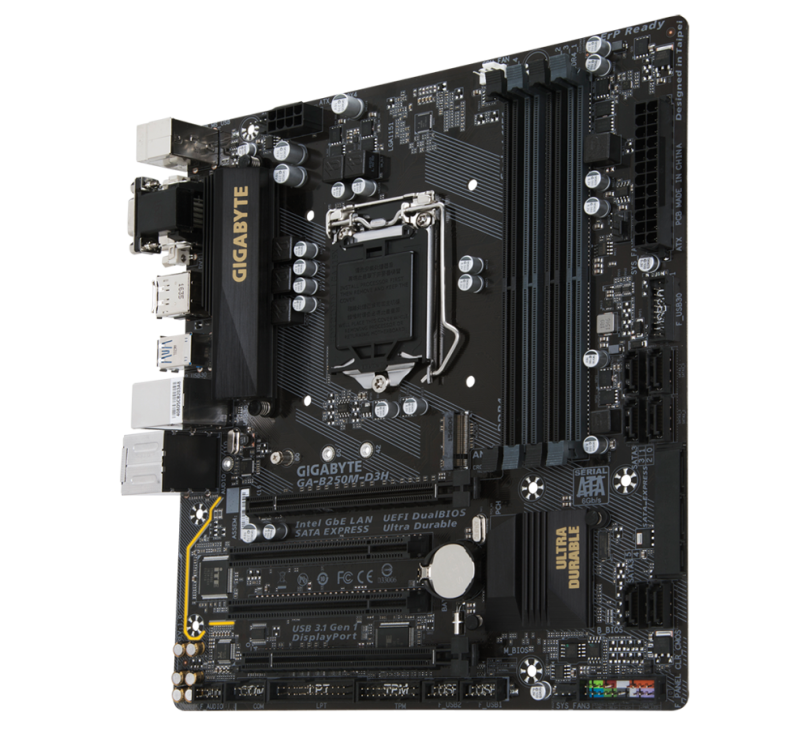 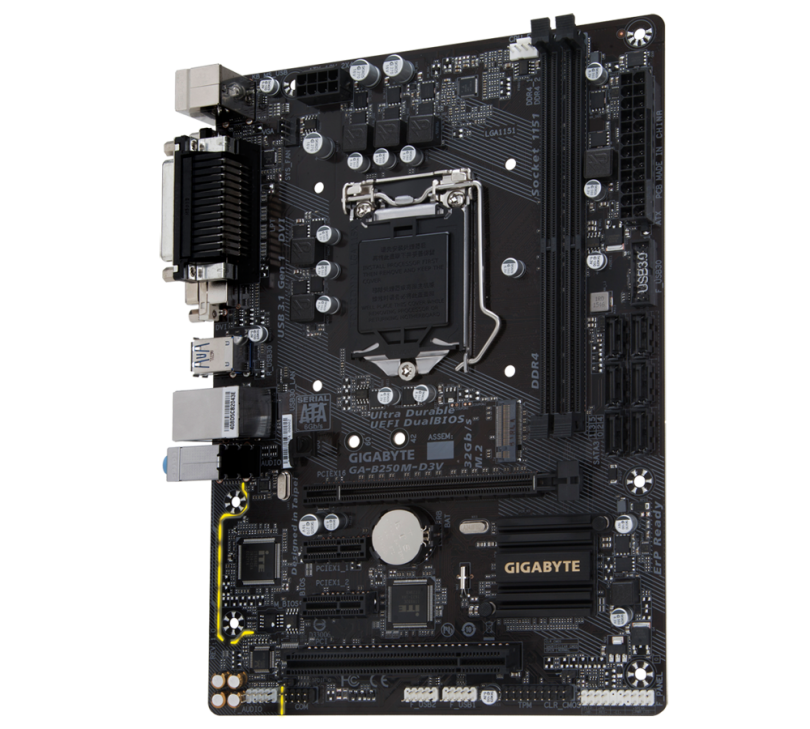 This is an interesting one, it’s basically Mini-ITX in width but microATX in height. But despite the sleek black PCB with gold/yellow accents, this is definitely aimed at businesses because it features a parallel port for offices still using 15 year old printers (which is more common than you’d think). 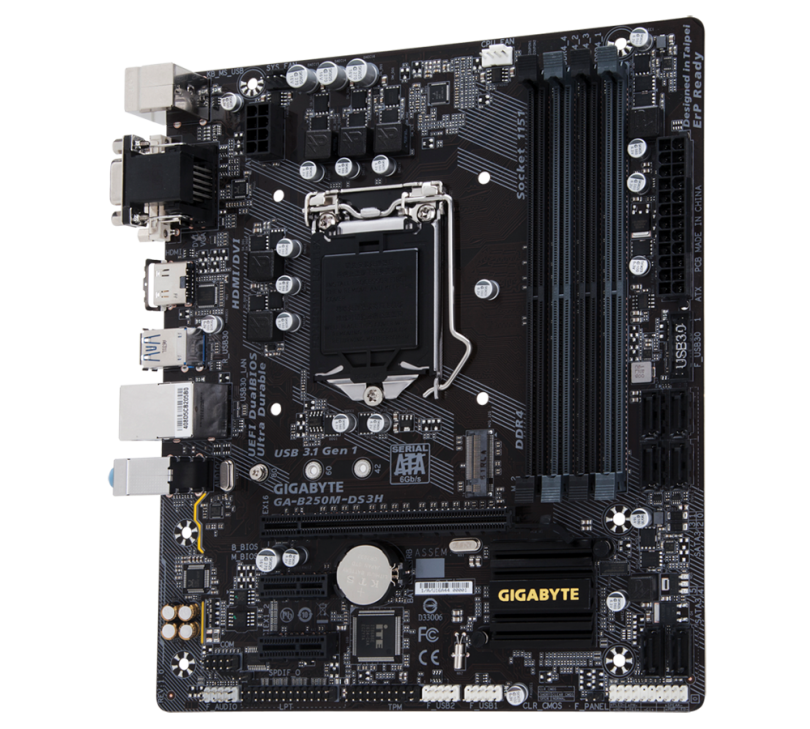 Another budget board but this one looks more well-rounded for a normal user, as opposed to the anachronistic ports on the previous board. 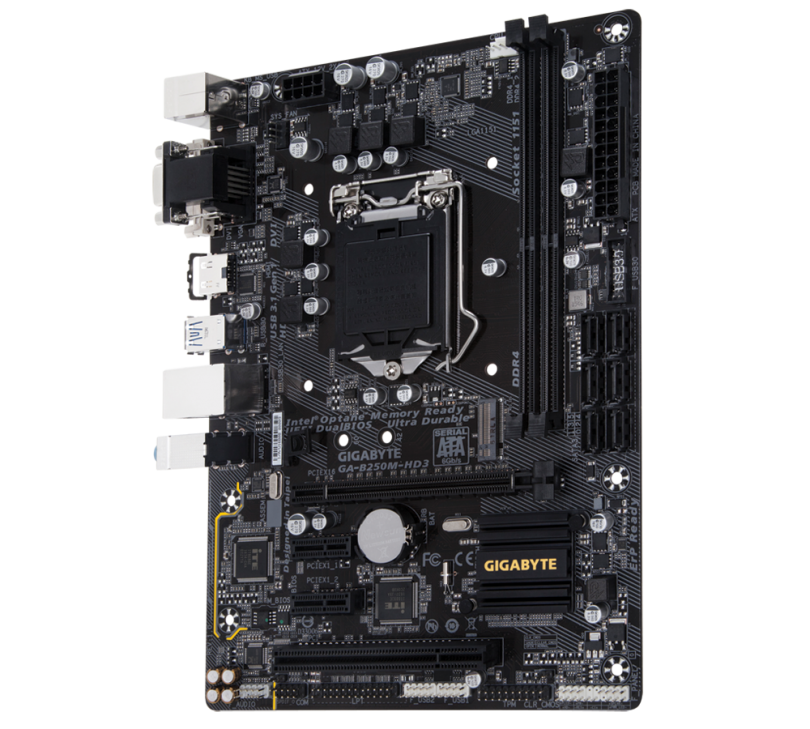 A variant of the GA-B250M-D3V that seems to most differ in rear IO. 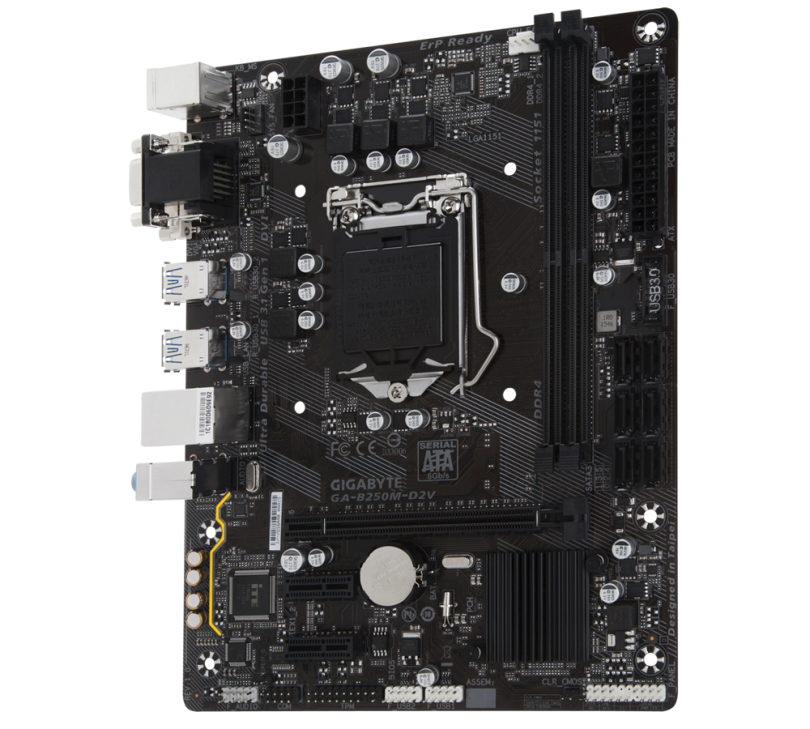 That’s all we can find.. for now. Does the Gigabyte range fit your expectations?

Leave your thoughts in the forum here.