This morning we posted about the amazing ASRock DeskMini GTX and DeskMini RX, and now we have shots of the new Micro-STX motherboard that makes this all possible: the ASRock Z270M-STX MXM! 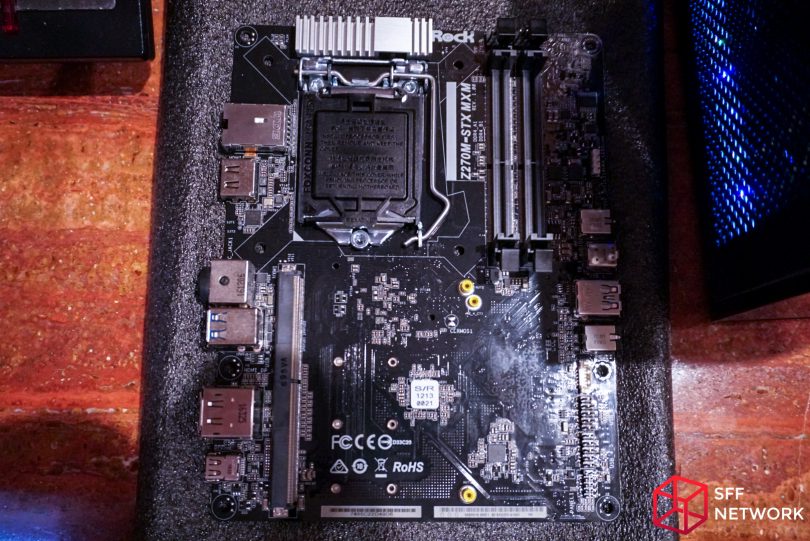 Here’s a good overview of the board, the upper 4 standoff locations are the same as Mini-STX and the width of the board is the same at 147mm. The main difference is the board is extended downward to make room for the MXM slot to a height of 188mm, and there are an additional 2 standoff holes at the bottom corners to support the additional PCB real estate. 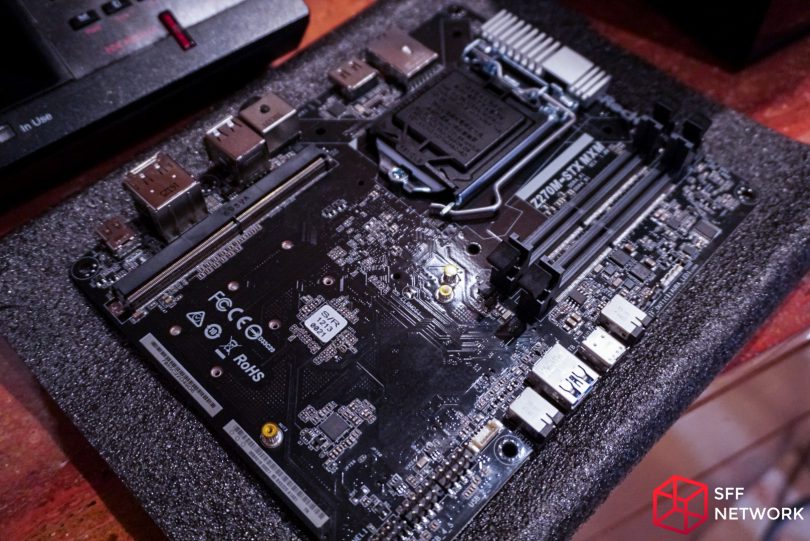 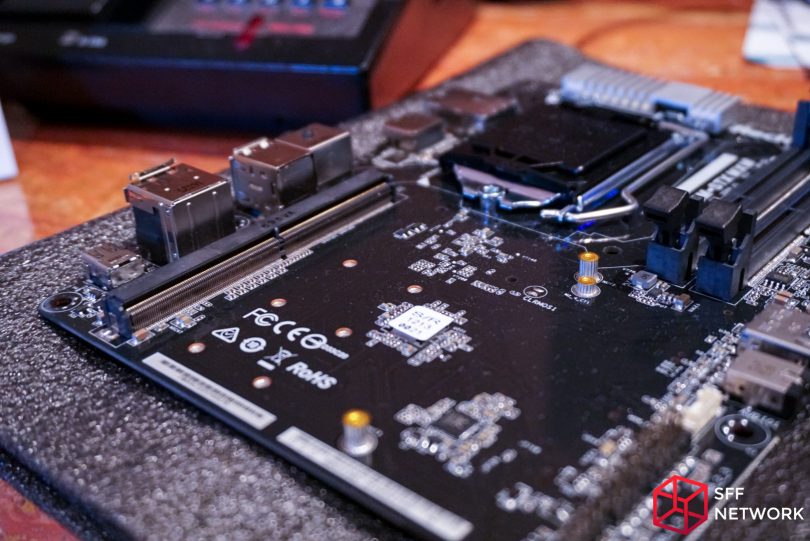 The MXM card slot is running at the full PCIe 3.0 x16 and can take cards up to 120W. Supposedly the MXM 1070 and 1080 have separate power connectors so it could be possible to use those with a suitable power solution… 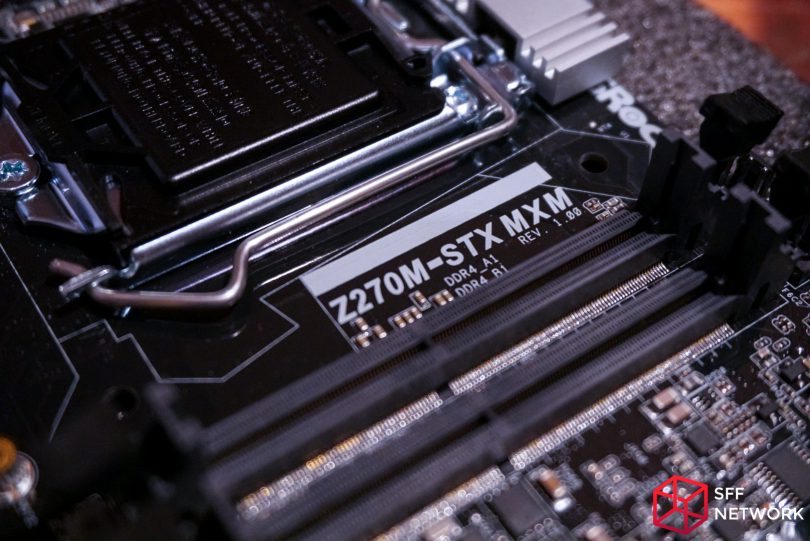 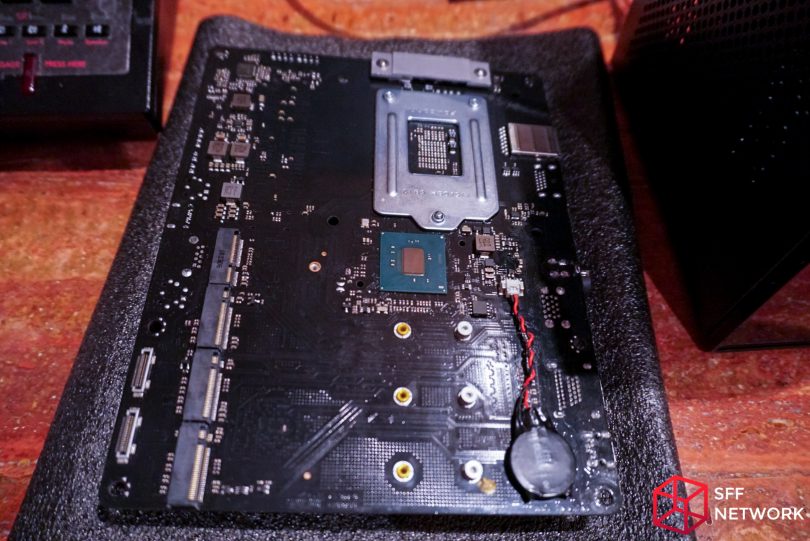 Flipping the board over we find the same laptop-style SATA connectors as the H110M-STX on the bottom-right edge of the board (bottom-left in the picture) then next to them is the absolutely insane three (yes, three!) PCIe 3.0 x4 M.2 2260/2280 SSD ports and the M.2 WiFi card slot. 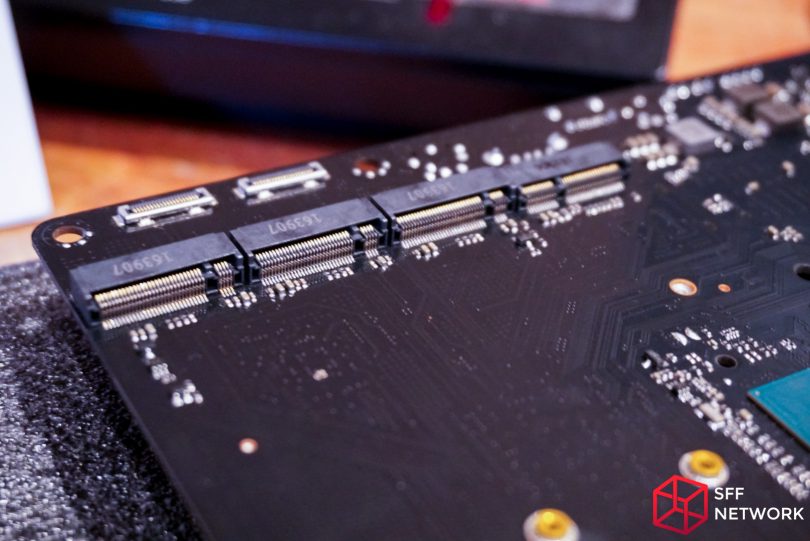 I feel giddy just looking at them! 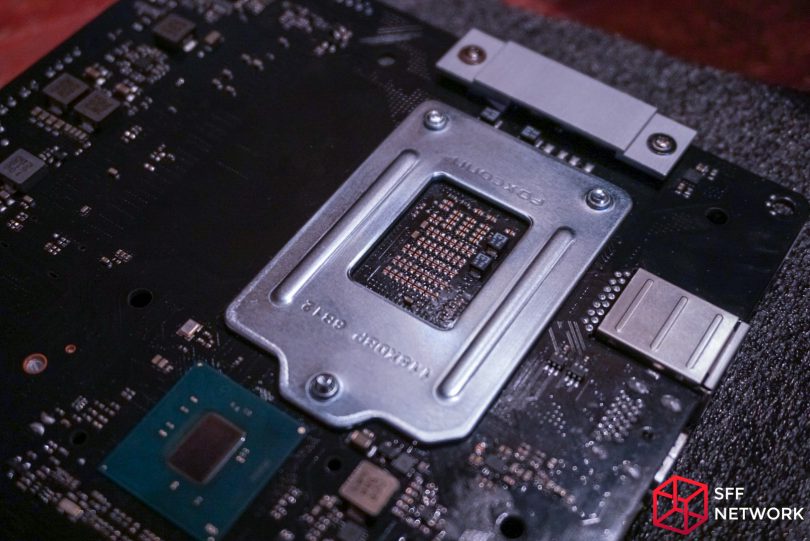 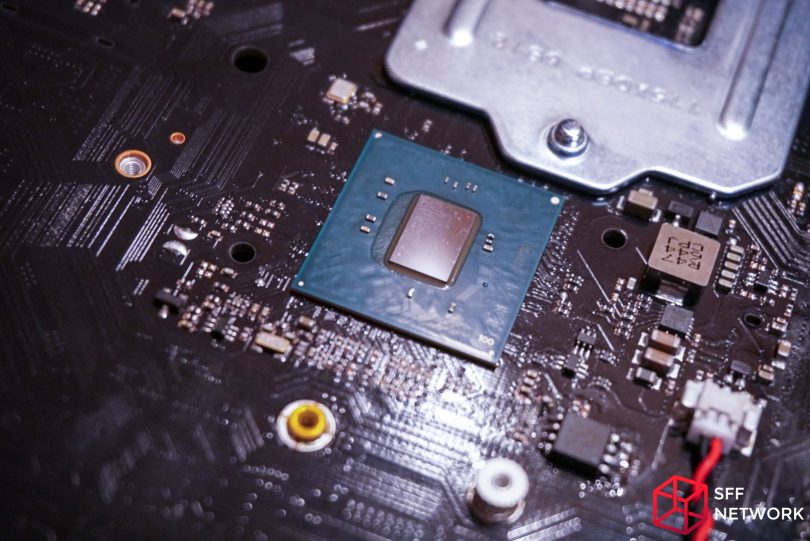 Here’s the chipset though it’s impossible to really make anything out here. 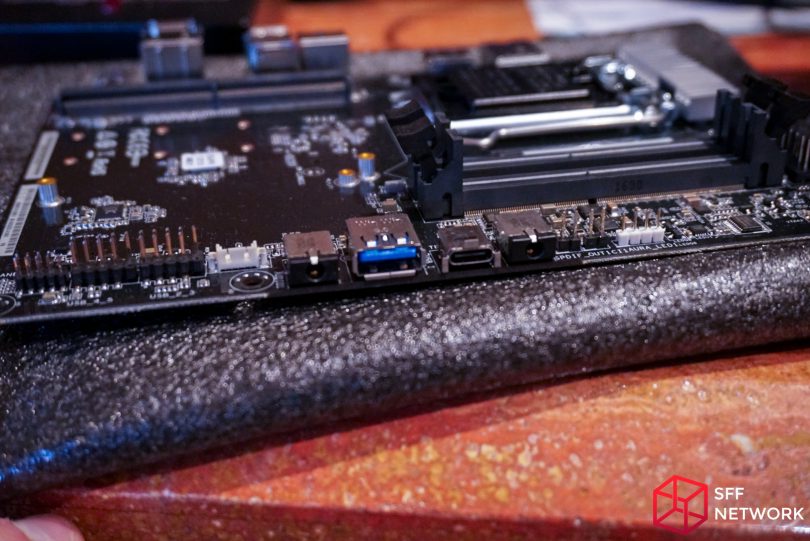 For the front connectors we have a microphone jack, USB 3.0 Type-A port, a USB 3.1 Type-C Thunderbolt 3 port (could you hook a eGPU dock to this for SLI/XFire?!), and a headphone jack.

ASRock also notes that the Thunderbolt 3 port “Supports VR Function (Depends on Graphics Type)”. I assume this means it can be used with an adapter to go to DisplayPort or HDMI for use with a VR headset, but I’m not 100% sure on that. 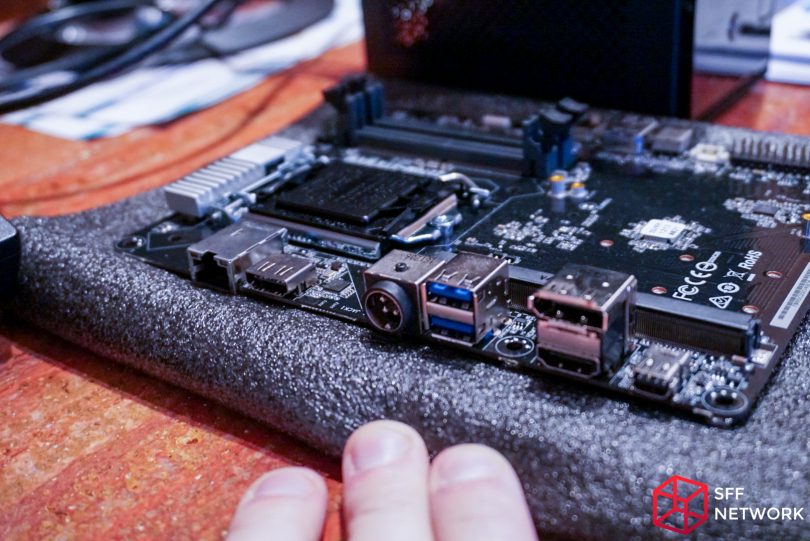 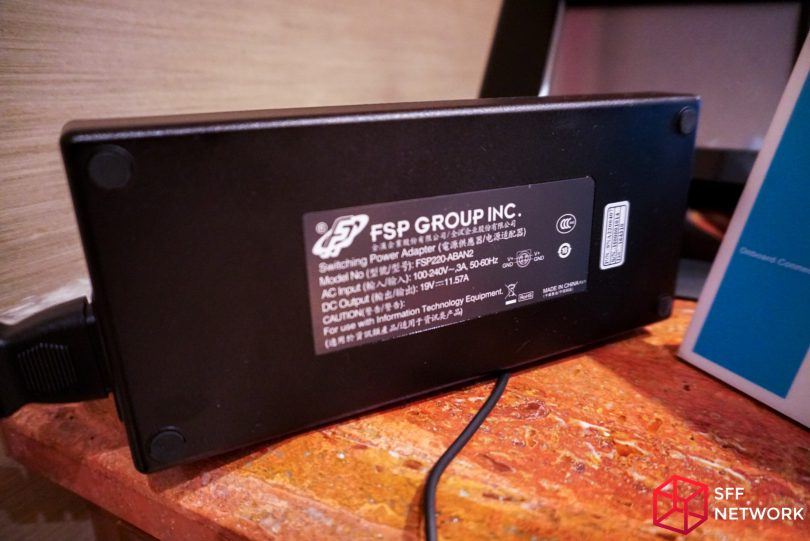 The AC adapter is a FSP220-ABAN2 and it is 19V at 11.57A for 220W of power. The dimensions on this brick are 197mm x 88mm x 44.5mm according to the manufacturer’s specs, which comes out to 0.8 liters. ASRock assures us that 220W is indeed sufficient for an i7-7700K and MXM RX 480, though one concession to the limited power capacity is that overclocking the CPU is not supported despite being a Z270 chipset. 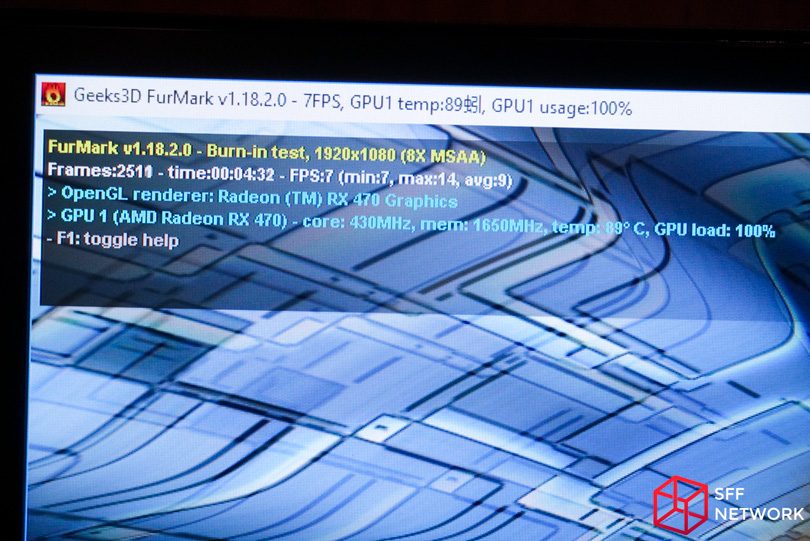 They were running FurMark on one of the demo units in the suite equipped with a MXM RX 470. 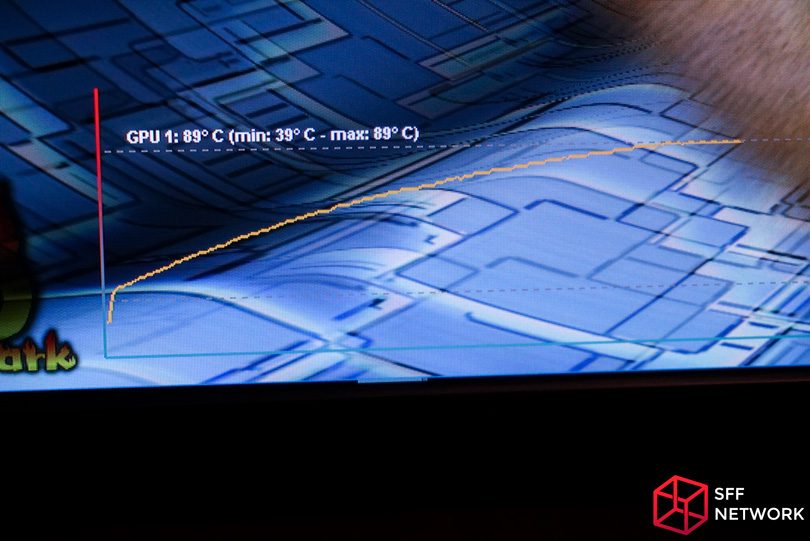 It looks like it has leveled off at 89°C, so not cool, but definitely within the operating limits of the GPU. Unfortunately we did not get any good pictures of the cooling solution for the MXM card but some of it is visible in this news post from Cool3C.com. Fortunately it is not a laptop-style blower but instead a heatsink stack with a slim 80mm fan on top, which should open up the possibility for more robust cooling with either a custom case or some modding.

Drew later reported that while the system was “DEAD SILENT (under 30DB @ 89c)” [sic] while running the FurMark test. Just under 30dB isn’t exactly my personal definition of “dead silent” but it does seem ASRock is prioritizing noise levels over load temperatures. This is a somewhat contentious topic but I’m glad they’re taking this route. MXM cards are designed for the hot guts of a laptop so running the GPU at the kind of temps it’s designed for to keep the noise level reasonable is a good trade-off in my opinion.

Also, the heatsink that ASRock is bundling with the system (along with the card) will be compatible with any other MXM card (provided it is to spec).

And finally, Drew also said that:

Mr. Chen reported that in-early testing Asus’s Z270 voltage regulators would drop the CPU clockspeed down to 3.1GHz under stress and also said that MSI would throttle all the way down to ~800Mhz. As a result, ASRock used a very fancy expensive undisclosed voltage regulation system (I’m not that smart) that has it’s own heatsink on the topside and bottom side of the PCB to keep it cool. This allows for constant Intel Turboboost clocks without throttling since their was no need to throttle. However, this means that overclocking is not possible (as mentioned)

Very interesting information, so in theory the DeskMini RX/GTX should have quite a bit better CPU performance than other comparable Mini-PC systems. 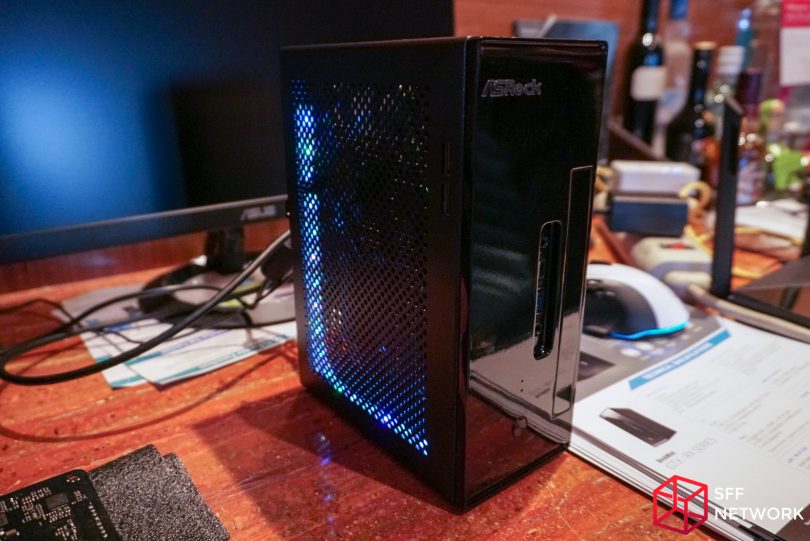 That is indeed a slim optical drive mount, but if support for spinning plastic discs is not required, the space can be used as a mounting area for 2x 2.5″ drives. 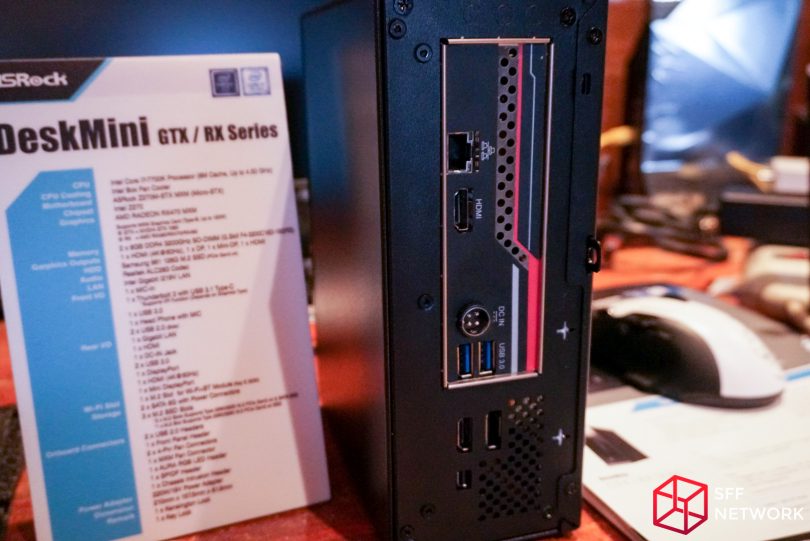 And here’s the back of the chassis, clearly showing the 4-pin DIN connector for the 19V power-in. 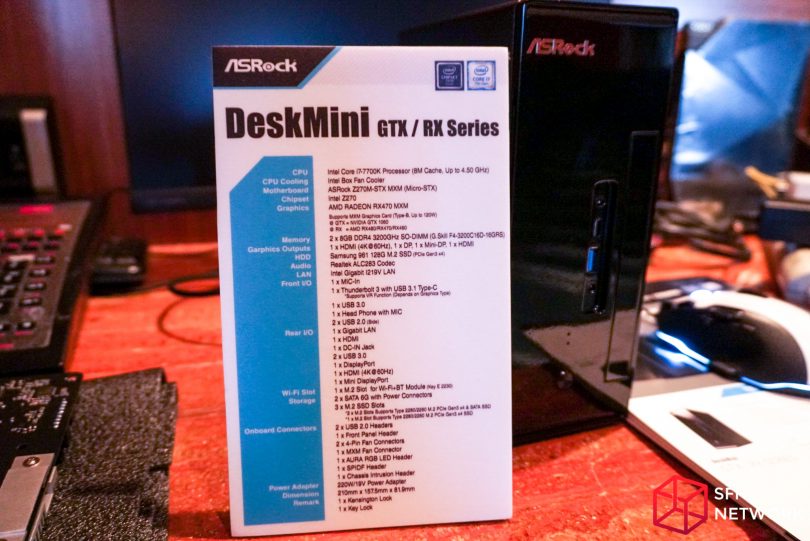 And here’s a placard with the full specs for this particular demo unit.

Pricing remains to be seen, but if ASRock can offer these for a reasonable price including the MXM card, and can ensure availability of compatible cards for future GPU generations, I think this will be a very interesting SFF solution for those looking for the most compact yet powerful system possible.