Yesterday we saw leaked images of the upcoming Intel 200-series chipset motherboards, but today several manufacturers have officially announced their new line of motherboards. This post will take a look at ASRock’s lineup. 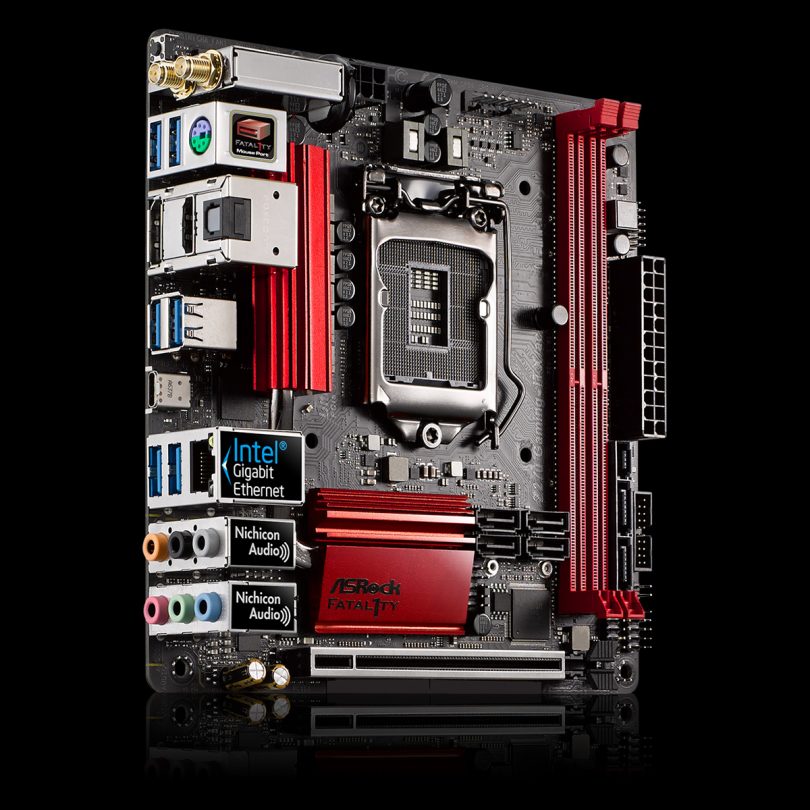 But there is also a HDMI 2.0 port, and, more surprisingly, a Thunderbolt 3 port! 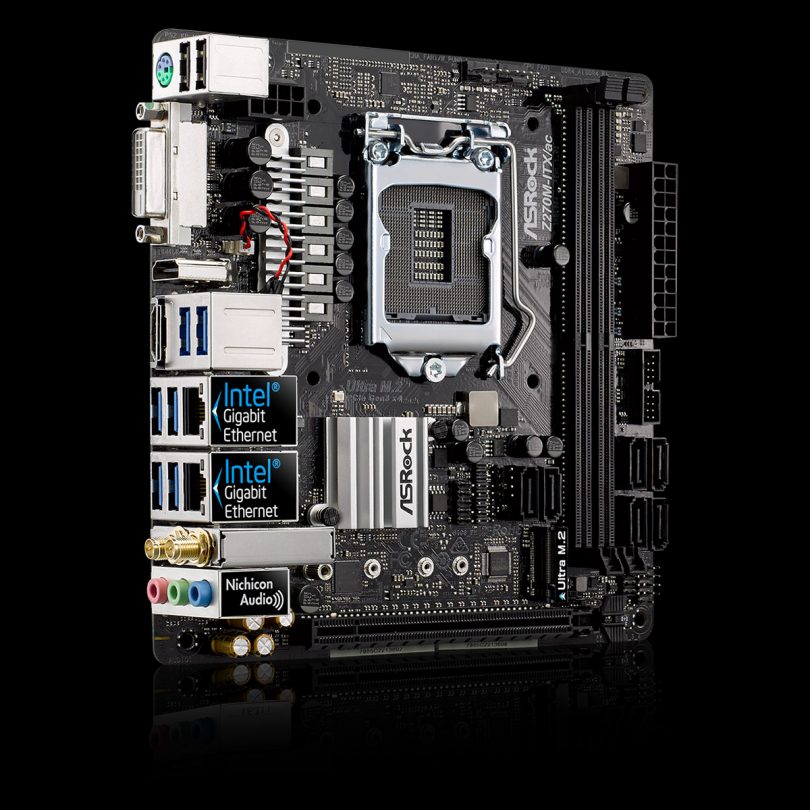 The Z270M-ITX/ac looks to be a solid mid-range board, and we especially like the monochrome color scheme compared to the somewhat gaudy red on the Fatal1ty. Specs are pretty standard, except that it includes not one, but two Intel Gigabit NICs, for some reason. 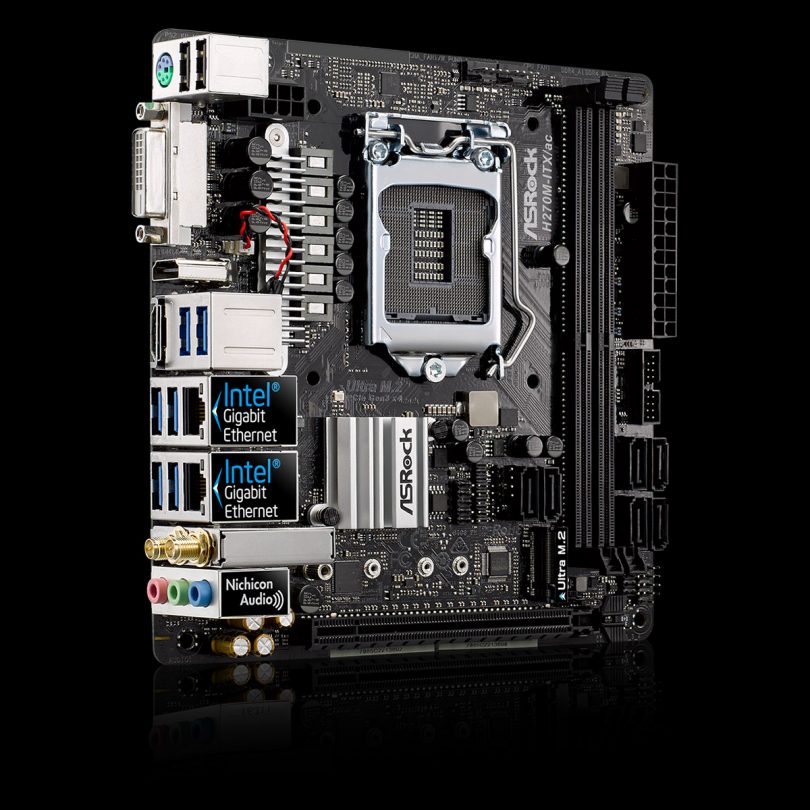 Basically a cheaper version of the above board from what we can tell. It’s a H-series chipset so it will not support overclocking, but otherwise looks identical to the Z270 version. 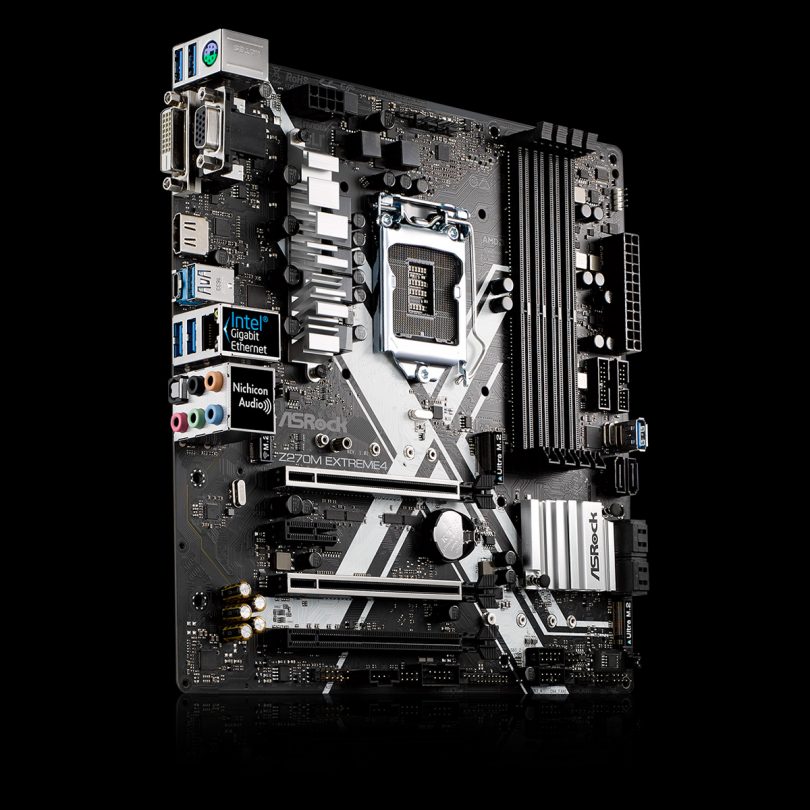 Thankfully the high-end ASRock Z270 microATX board is not a Fatal1ty but instead from the Extreme4 line, and as such the Z270M Extreme4 is sporting a striking monochrome scheme with a white “X” splashed across almost the entire board. The VRM heatsinks look a little anaemic compared to other high-end Z270 boards (and this could be because that’s all that’s really necessary) but otherwise we quite like the appearance of this board.

Specs include an Intel Gigabit NIC, RGB lighting (just the PCH lights up), dual PCIe 3.0 x4 M.2 ports, Key E M.2 for WiFi (it’s half-hidden behind the audio connectors in the picture), USB 3.1 Type-C and Type-A on the rear IO, and so on. Unfortunately it does not have the new USB 3.1 Type-C header and strangely has a vertical USB 3.0 Type-A connector underneath the dual 3.0 headers. I’m not sure what this is intended for, the marketing and manual make no real mention of it so it’s a bit of a mystery.

Importantly for SLI fans, this board does support dual NVIDIA graphics cards running in x8/x8 configuration. 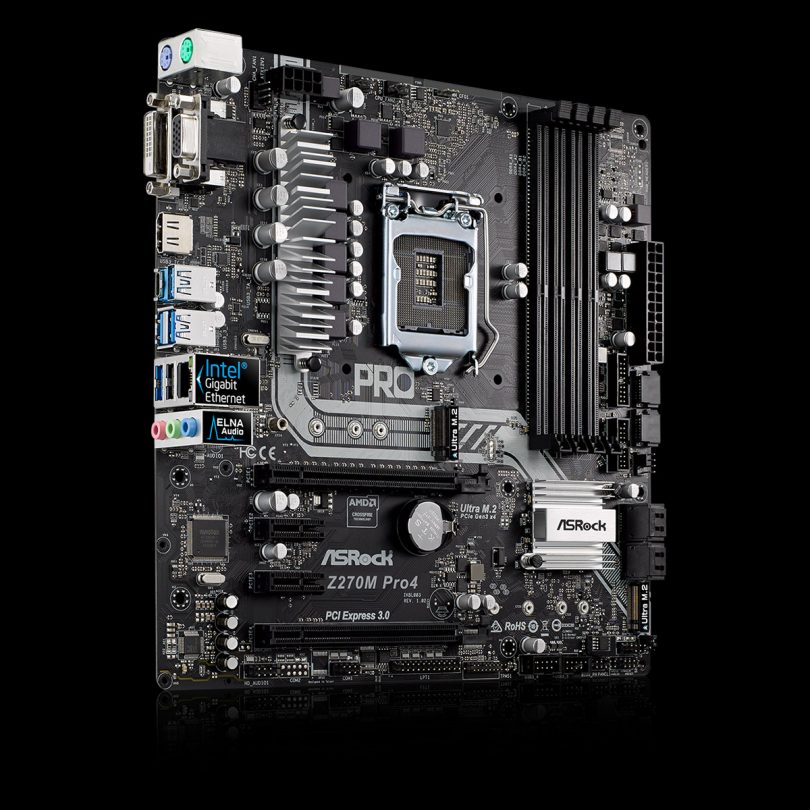 The Z270M Pro4 is a down-market model that gives up the RGB lighting, USB 3.1, wireless card slot, etc. from the Extreme4. Sadly one of the things removed was SLI support, as the bottom x16 slot is only x4 electrically. AMD Quad CrossfireX is supported though. Amusingly, ASRock seems to still be using the same chipset heatsink extrusion die they’ve been using for 22 years! Apart from that, this one seems like a pretty generic board. 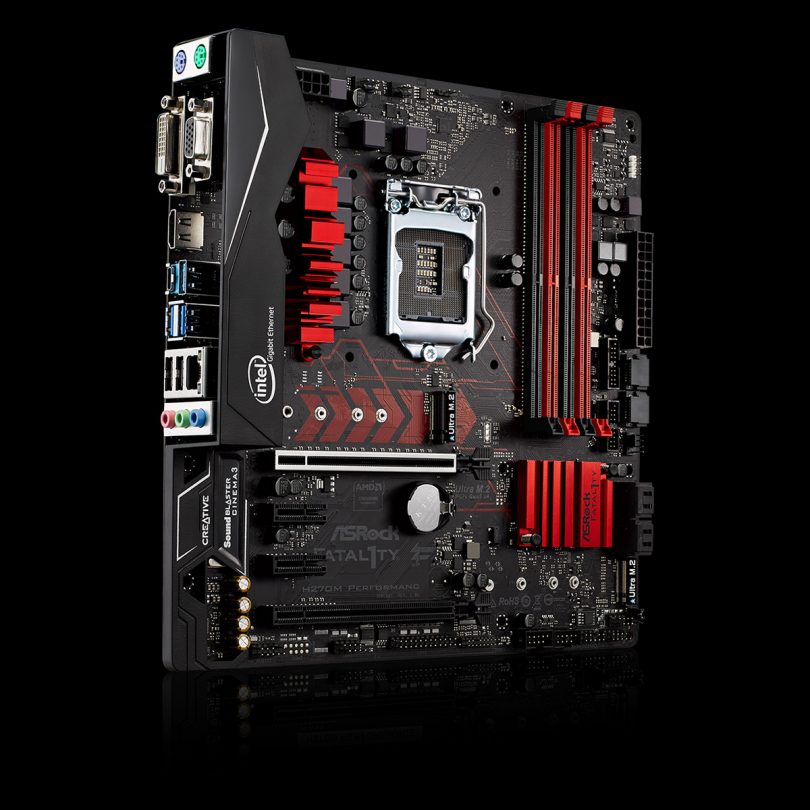 Fatal1ty makes an appearance again, providing similar specs to the Z270M Pro4 above. ASRock’s AURA RGB LED (ALL CAPS!!!!) makes itself known here. Unlike the board we just covered, the Fatal1ty features a return of the armoured PCIe x16 slot. 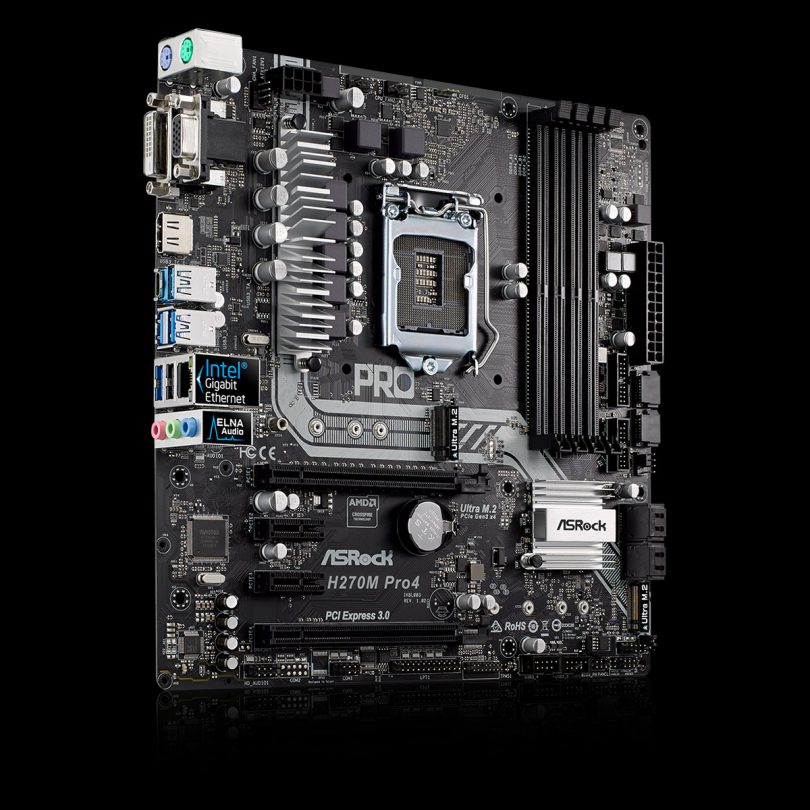 It’s a Z270M Pro4 (shown above) with the H series chipset (seriously, check this GIF:

– click to embiggen). Apart from the usual H-series chipset limitations, the board also reduces your max RAM speed to 2400, down from 3600MHz. 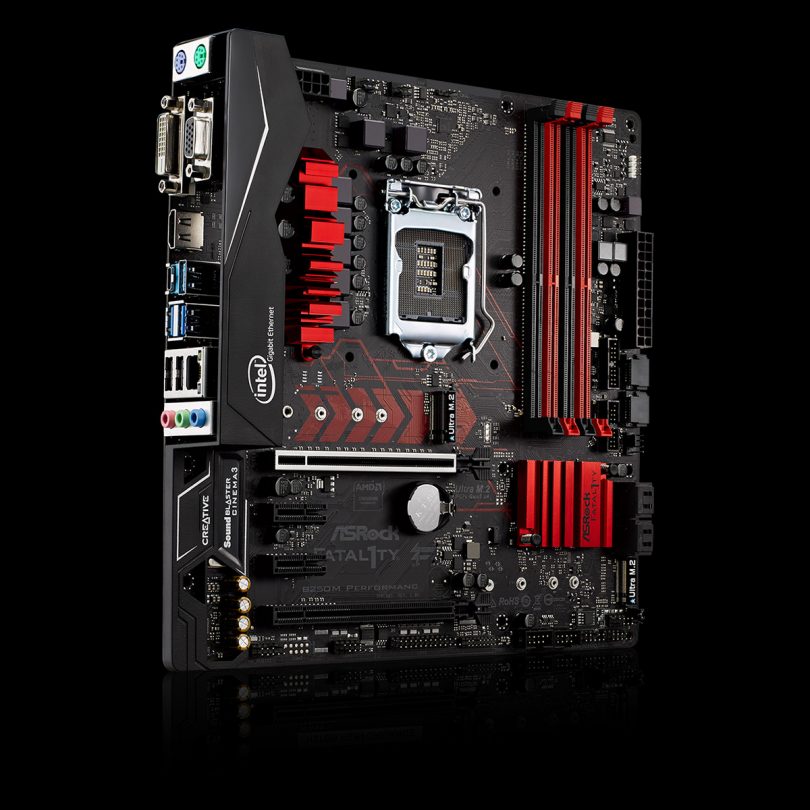 Yup, another chipset-swapped board. Moving on.. 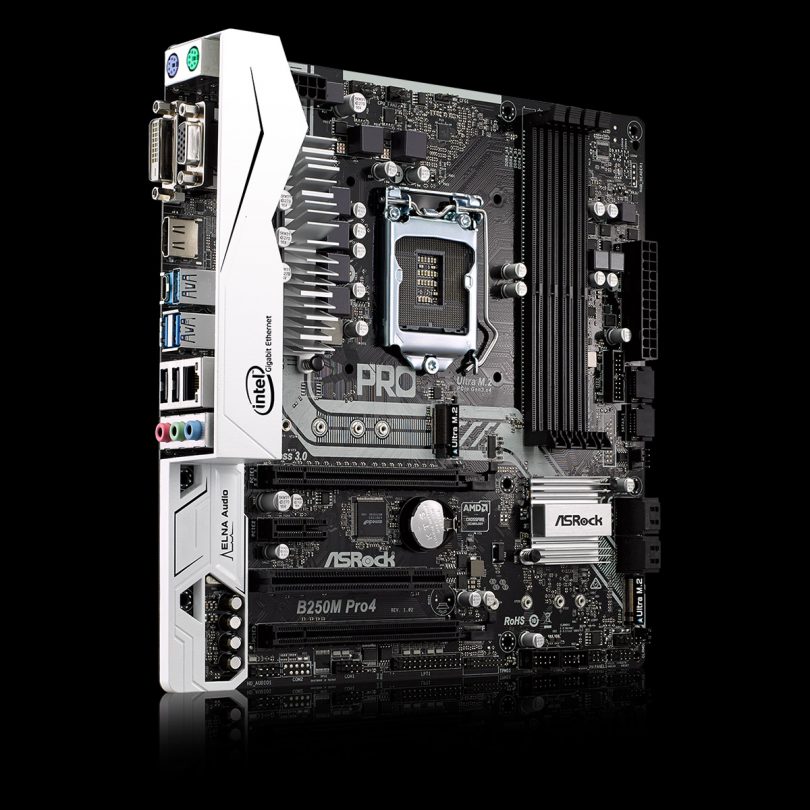 Down the market ladder we go, and we’ve reached PCI slot territory. Seriously ASRock, this is 2017, nobody uses PCI now. Apart from that, this is an adequately featured board. 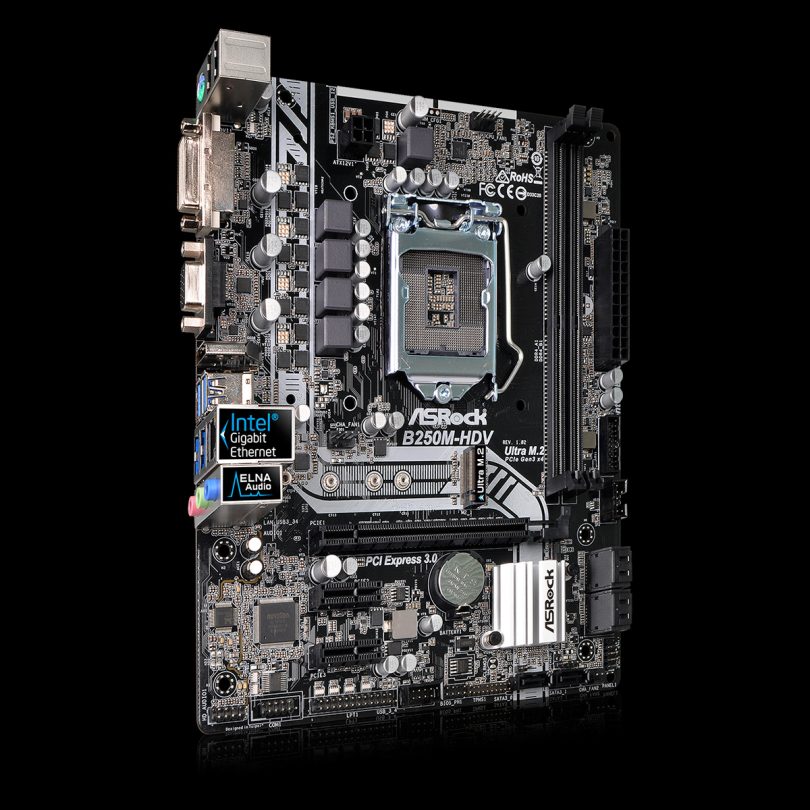 At the bottom of the ladder we find the B250M-HDV. Offering ample included features (and eschewing the PCI slot!!), this looks like a solid option in the budget board realm. This board is also the only M-ATX board with only 2 RAM slots, but it does make up for this by being smaller than M-ATX spec (22.6 cm x 18.3 cm). Interestingly, there does seem to be mounting holes for VRM cooling, maybe we will see a slightly upmarket version of this board in the future?

So that’s ASRock’s 200-Series board range at the time of writing. Feel free to let us know what you think in the forum!