AMD has released the Radeon Pro W5500 – an RX5500 (or RX5500 XT depending on the yet to be disclosed clock speeds) wearing a shiny blue, rather slimming, suit. This single slot ‘Pro’ grade GPU is a RDNA gen 1 based product, built on TSMC’s FinFET 7nm node. With 22 Compute Units, a 125W TBP (Total Board Power), the card is a mid range performer.

GDDR6, PCIe 4.0, and Professional grade drivers are the base bullet points with this card, along with a single slot form factor. The single slot form of the card seems to have been missed by the tech media I have perused today, but is an advantage for a SFF workstation! A blower cooler design is evident in the pictures, with the Radeon Pro YInMn Blue colouration. Filtering through the marketing spiel, independent performance results are yet to emerge, so we can’t posit any suggested performance segment for this card, outside of it’s RX5500 parentage.

The Radeon Pro W5500 is expected to have a MSRP of $399 USD. Let us know in the forum when this card hits retailers, and link any reviews – the community would love to see performance figures!

Also announced at this time is the Radeon Pro W5500M – the mobile variant of the GPU, with a lower TDP, likely a result of lower clocks. 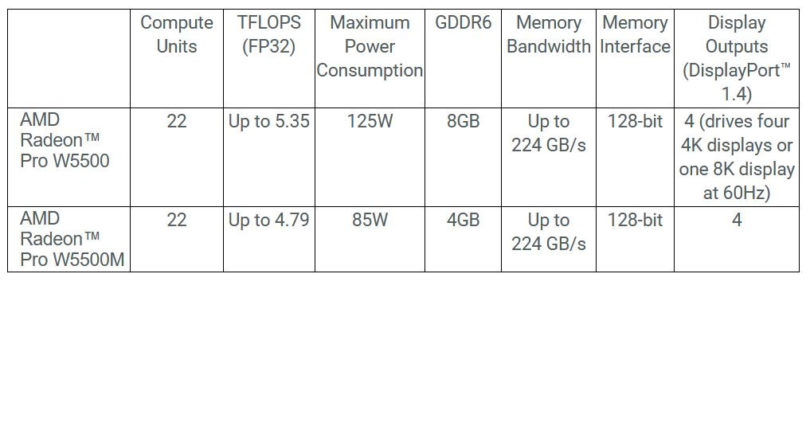