Official product pages are starting to appear for upcoming Sandy Bridge LGA1155 mini-ITX motherboards. Full specifications are up for the Intel DH67CF, Foxconn H67s, Zotac H67ITX-A-E and the ECS H67H2-I on their respective websites. As excited as we are to see official specs, we couldn’t help but notice a few misprints.

In our preview of the Foxconn H67S, we noticed that the product page listed support for four DDR3 DIMMs when the motherboard clearly only supports two. Intel has also made the same blunder. The official specifications for the DH67CF state it too supports four memory modules. As interesting as it would be to pack that much RAM into a mini-ITX system, clearly it’s a misprint. 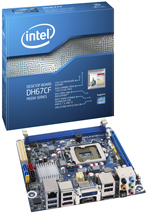 Whether or not these boards support the indicated 16 GB of RAM across two slots is yet to be determined, although Intel’s retail packaging for their board clearly states 16GB of DDR3-1333/1066. Let us hope they didn’t misprint thousands of boxes as well.

The specs from Zotac for the H67ITX-A-E also claim 16 GB or memory support, but they clearly indicate only two DIMM slots.

ECS also got the number of slots right for the specs on their H67H2-I, but they indicate a maximum of 8 GB of DDR3.

Another oddity on the Intel spec page indicates that for the product launch, the DH67CF will only support 65w TDP Core i3-2000 and i5-2000 variants. The ‘View Compatible Processors’ link indicates only the i5-2400S is supported. Perhaps a BIOS update is planned to allow for a wider range of processors. Just something to keep in mind if you’re planning on jumping on this board close to its launch.

Misprints or not, we can’t wait to get out hands on these new boards and see just what Sandy Bridge can do for our ITX gaming systems.