Launched as a Kickstarter project some months ago, Drevo’s Blademaster keyboard has become the “most backed keyboard Kickstarter (campaign) ever”. As keyboard fans, we kept an eye on the project, and were pleased to see the campaign go without a hitch, thus far. With the campaign behind us, we have been sent a sample to check out and pass judgement on.

With a customisable knob, RGB all the things, and a unique aesthetic, the Blademaster stands out on it’s own just from a first glance. Will the user experience match up? Let’s see.

Beginning as a Kickstarter campaign, the Blademaster broke some ground as a mass produced mechanical keyboard project. Backed by Drevo, who have produced many a keyboard before, the Blademaster is aimed at a more… high end market than their other products. As this is a new market for Drevo, the keyboard needed to be proven in sales before hitting the proverbial “Go” button. Proven it was, with a total of over 2,500 units sold during the campaign.

The main selling point of the Blademaster is the “Genius-Knob”, a programmable knob located to the left of the keyboard’s body. Using Drevo’s software, this knob can be programmed to perform simple or complex functions, including a button press. From Drevo’s marketing;

Whilst the main focus is gaming, the knob could be applied to stuff as simple as a second scroll wheel or a volume control, all the way to macro mashups involving mouse buttons and keyboard keys.

Of course, RGB mustn’t be ignored in today’s market. Drevo has implemented a 16.8 million colour RGB control system with multiple modes. This all applies to the keys, of course, but also includes a keyboard frame perimeter RGB “strip”.

Additionally, the key layout is customisable with a DIP switch (old school!) underneath the board, with Dvorak, Minimak, Colemak layouts available at the flip of a couple switches. Also available is the swapping of modifier keys (CapsLock, left CTRL, ALT and the Windows key).

For wireless models, dongle-less Bluetooth connections is a forte of Drevo’s keyboard lineup, with no exception here. Drevo claims a 1ms/1000Hz report rate, as part of the customisable 2ms/500Hz, 4ms/250Hz, and 8ms/125Hz range. Adding in frequency hopping, encryption and proprietary technologies, the wireless connection seems to be a well developed option. The review unit we have to hand, however, is a wired version. No batteries here!

Conveniently, the Gateron switches use the Cherry MX style cap mounting, meaning that keycap sets to customise your keyboard is still an option, even if you go for the wired TE version. 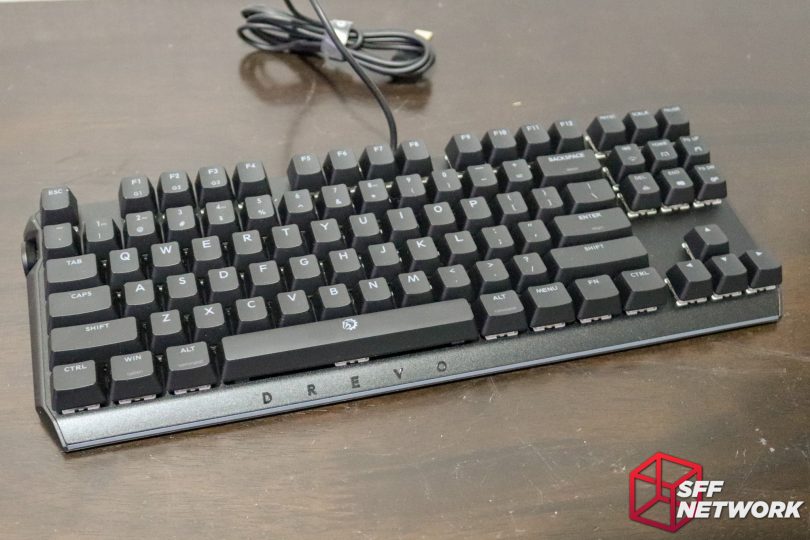 As this is a pre-release unit, we’ll skip the unboxing. The Drevo Blademaster is resplendent in a subtle black, with even the Drevo branding just a glossier black. Lights off, this is a pretty classy keyboard.

The tenkeyless design saves space on your desk, assuming you don’t demand a numpad! 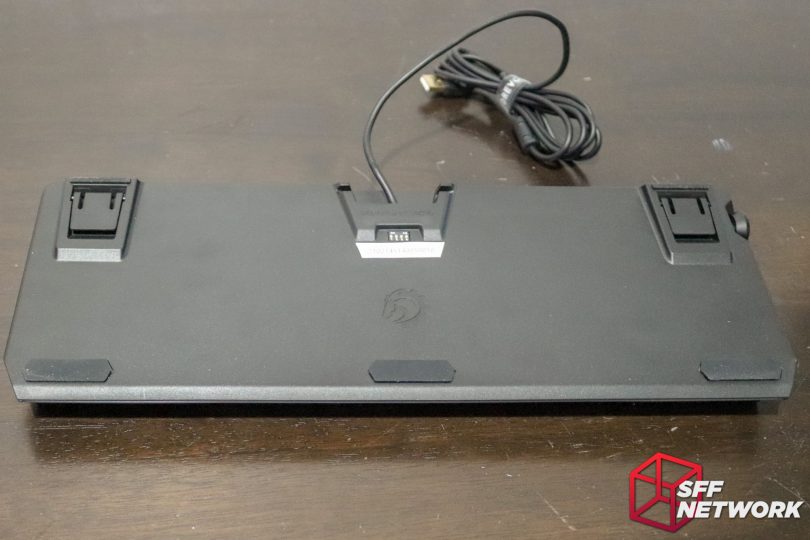 Underneath, it’s a little different from most. Apart from the oversized rubber feet, a DIP switch stands out – what’s this for? 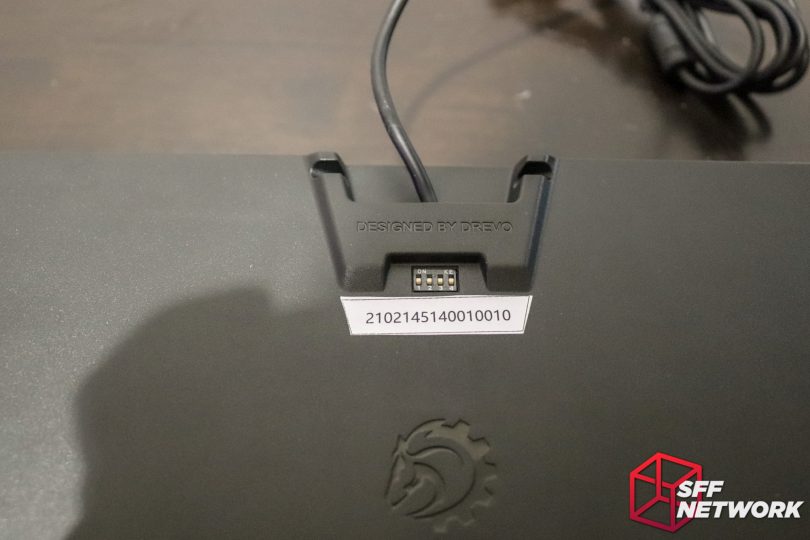 The aforementioned DIP switch sets various options on the keyboard – see “The Promise” above. I’d have liked to have seen a more aesthetic option here – a couple of sliding switches selecting layout and key swapping. DIP switches just seem so… prototype. 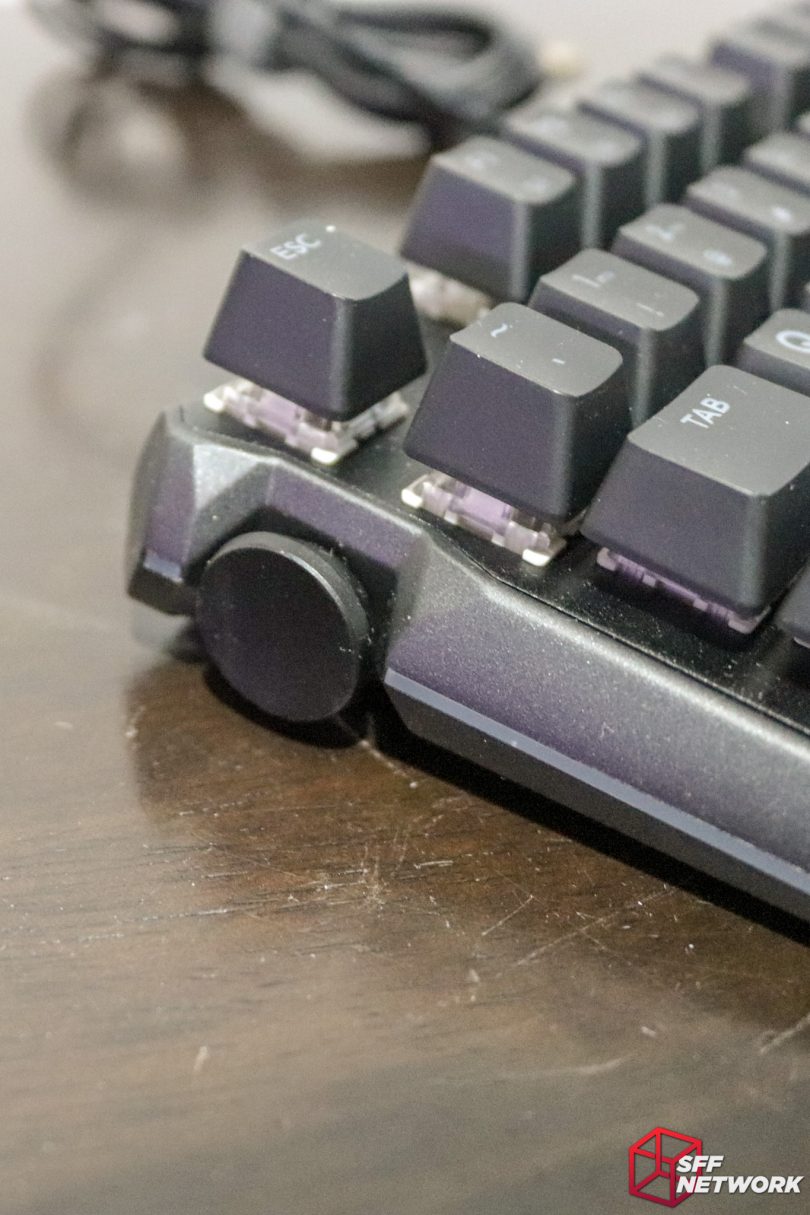 The knob! (Snigger all you want.) This is the key feature of the keyboard – it’s the customisable input device that helps the Blademaster stand apart from the competition. The knob appears to be plastic, with a smooth finish. When using the knob during testing, I found the surface to be too smooth – difficult to use in the heat of battle – which rather sours the major marketing point here. A rubberised coating or ridges here would have gone a long way to improving the user experience.

Apart from my concerns above, the action of the knob is positive, with clicks as you rotate, and a satisfying click in. 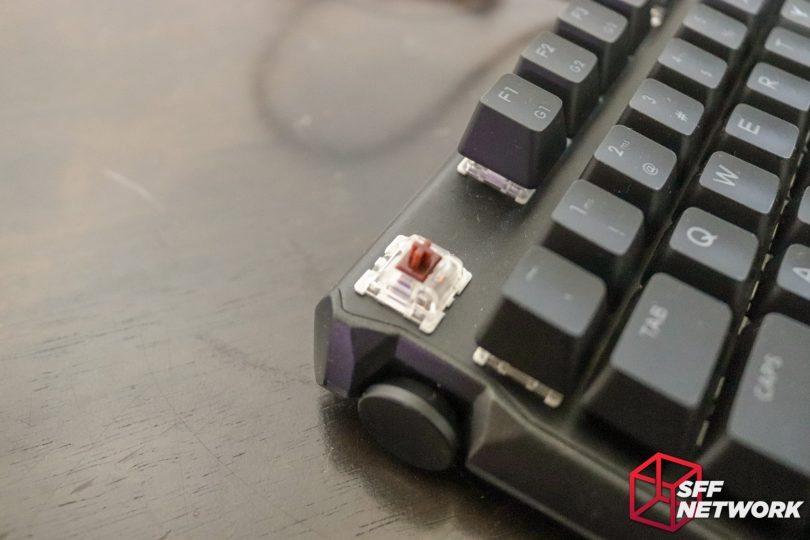 Using the standard Cherry MX style mounting, the Gateron switches in this unit are of the Brown variety. It seems that this switch form factor has become somewhat of an industry standard – great news if you want to customise your keycap set! 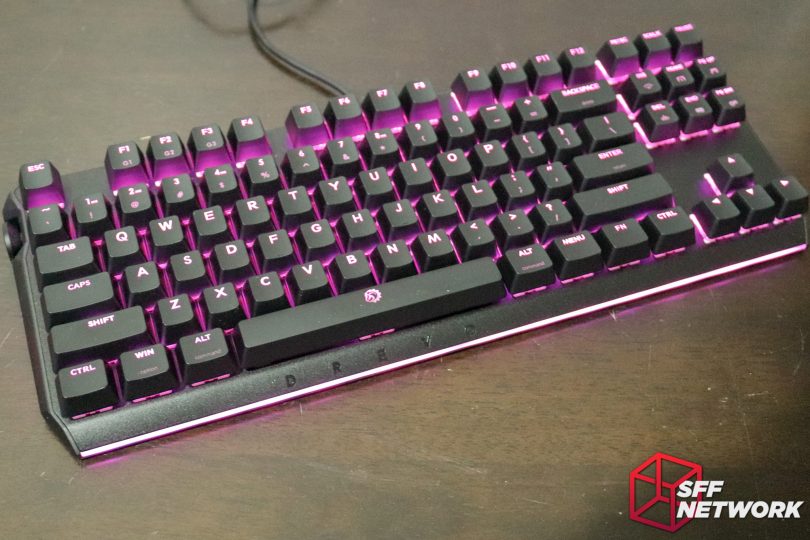 RGB! Namely, magenta. The supplied keycaps are of the doubleshot variety, allowing the characters to be lit by the LEDs. Along with this, the spacing of the keys from the base plate allows an underglow, maximising your RGB. Also of note is the strip along the sides of the keyboard, adding a more unique touch to the Blademaster. 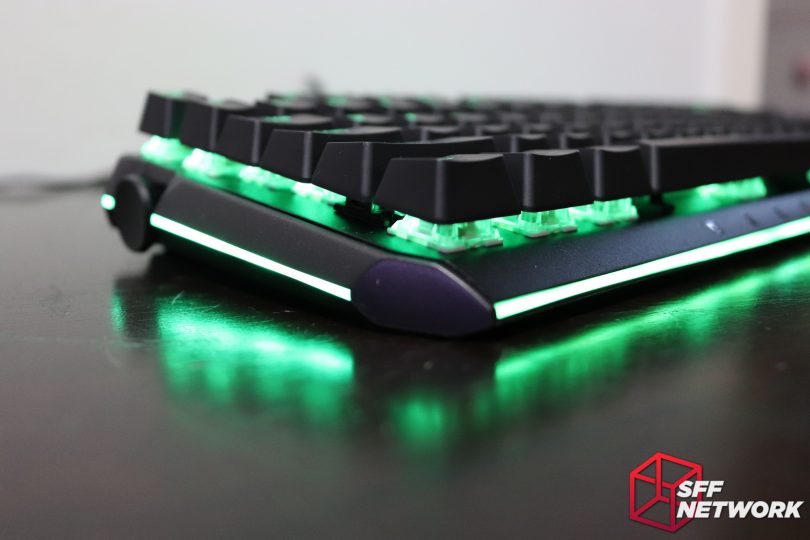 The LED strip on the sides is also customisable in Drevo’s software. 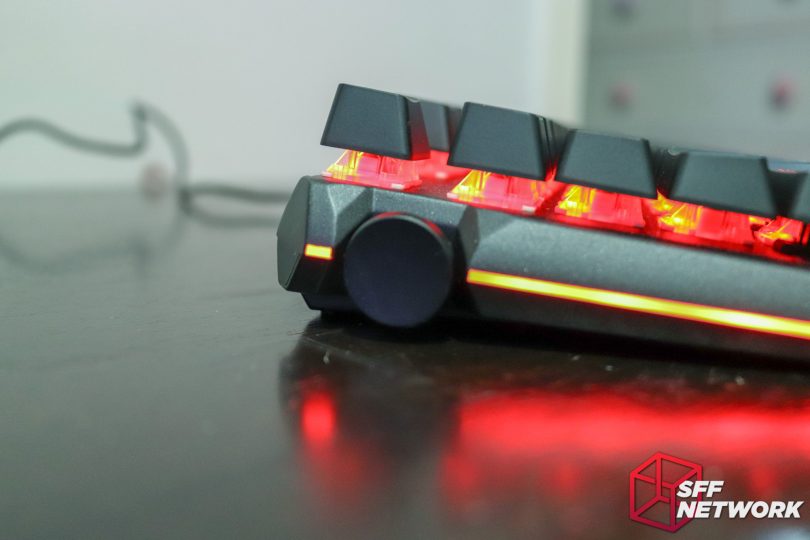 A gap in the lighting highlights the knob. How Tron! 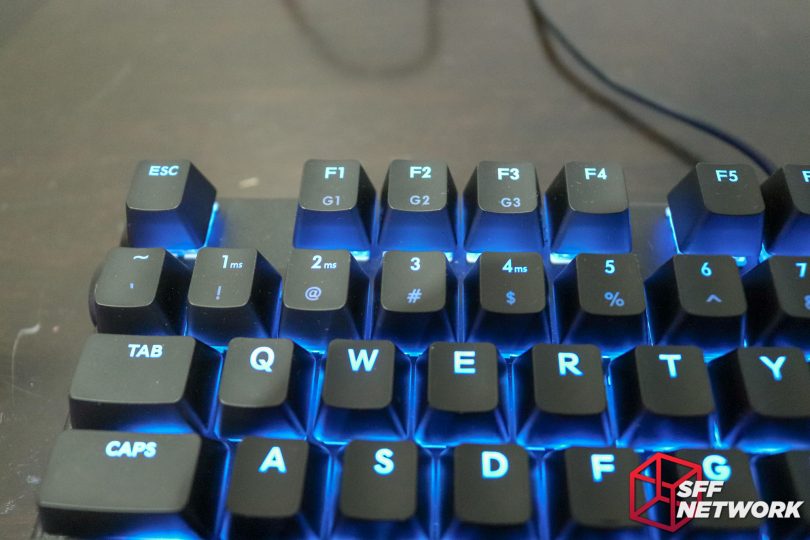 Keys 1-4, along with the Fn key, customises the polling rate of the keyboard, and works without installing Drevo’s software – great for non-Windows users. Drevo – Linux and Apple users exist too! 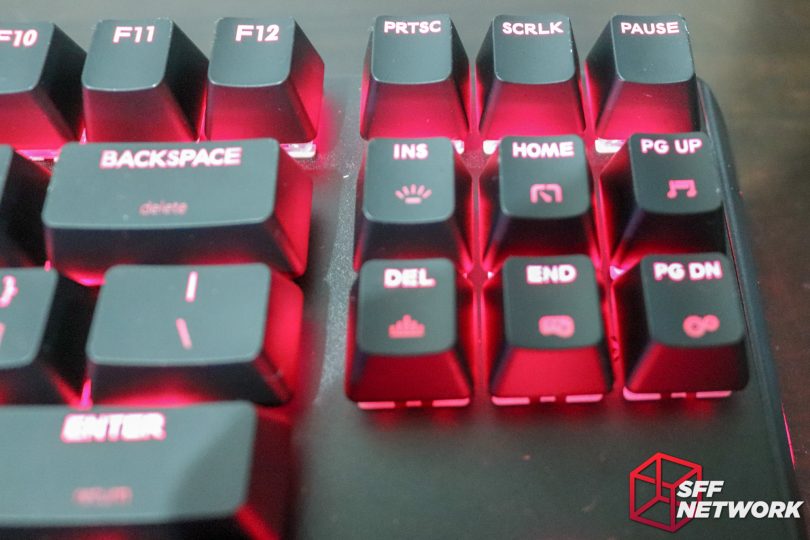 Symbols representing various lighting modes – the Fn key and these keys customises the lighting without software. 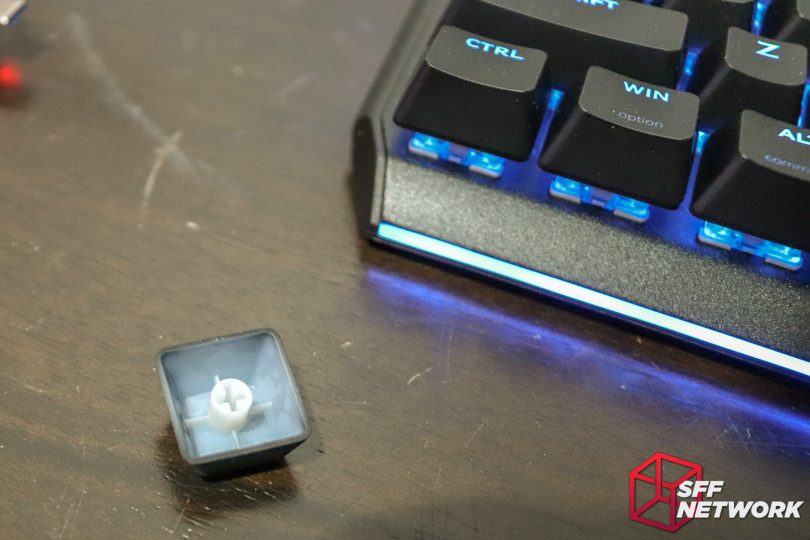 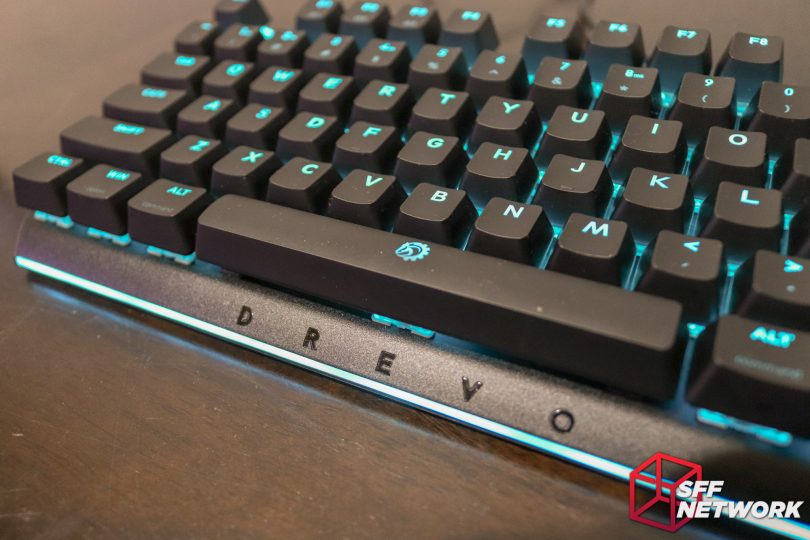 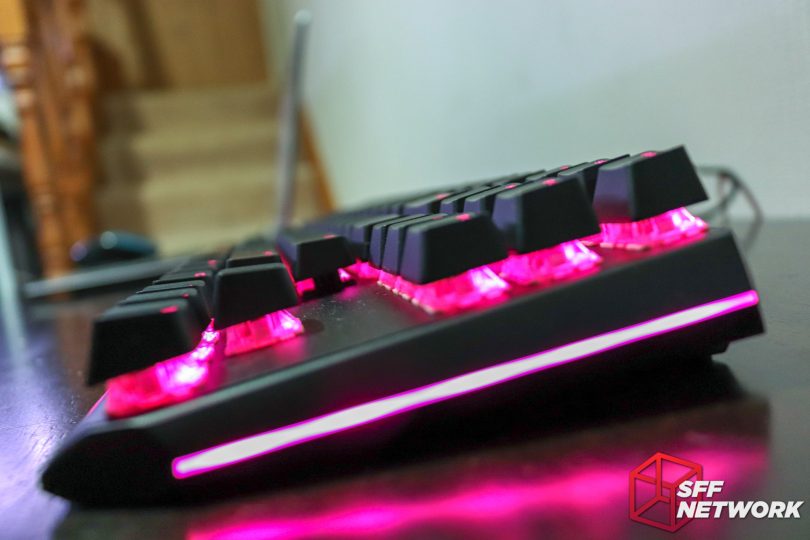 Pink! The gaps between the board and the keycaps is pretty big – I’m personally a fan of recessed keys. 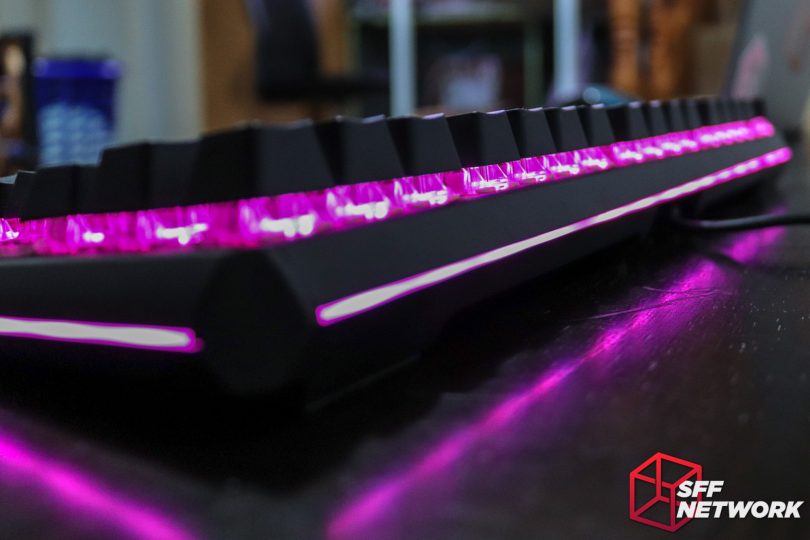 The RGB strip even makes its way to the back side of the keyboard. 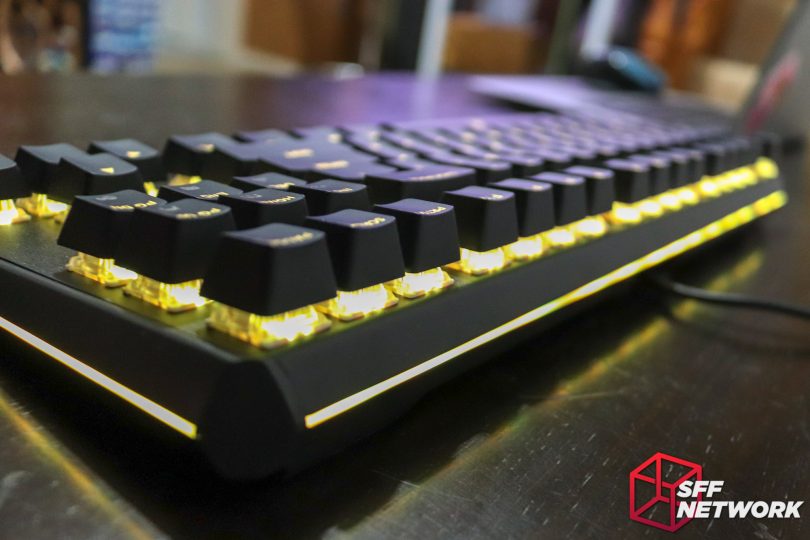 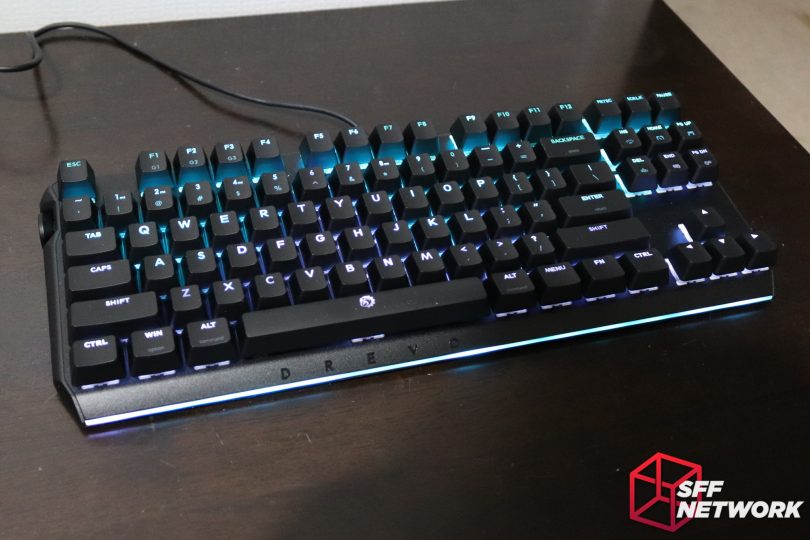 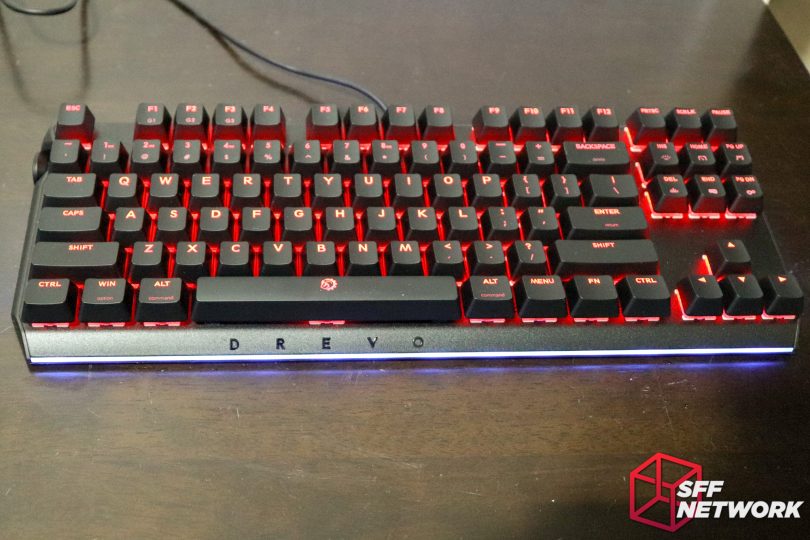 Yes, the RGB strip can be a different colour to the keys!

Whilst the software I was able to use with the keyboard was pre-release version – so bugs were expected. Bugs were had, but they didn’t ruin the overall experience. 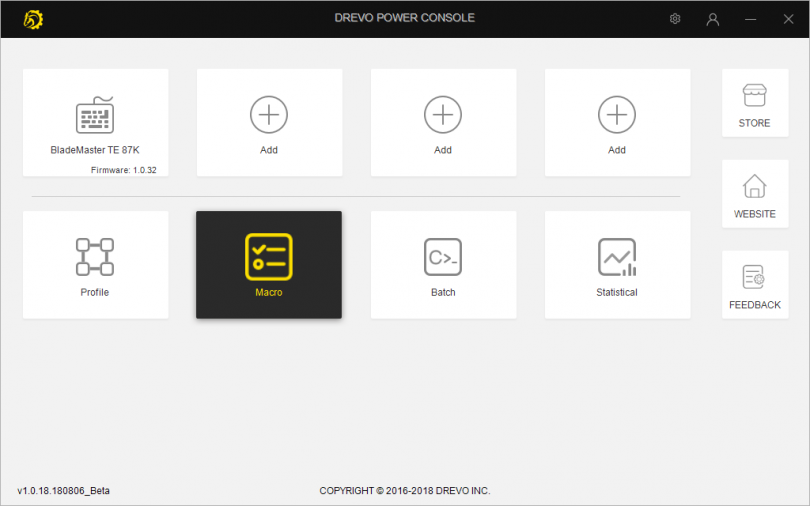 Drevo’s Power Console – the software used to customise your BladeMaster. It seems that Drevo may be considering porting over other products in their stack, with options to add other items. This is great – a single software package across a range is so much better than individual software per product. Dev once, dev right! 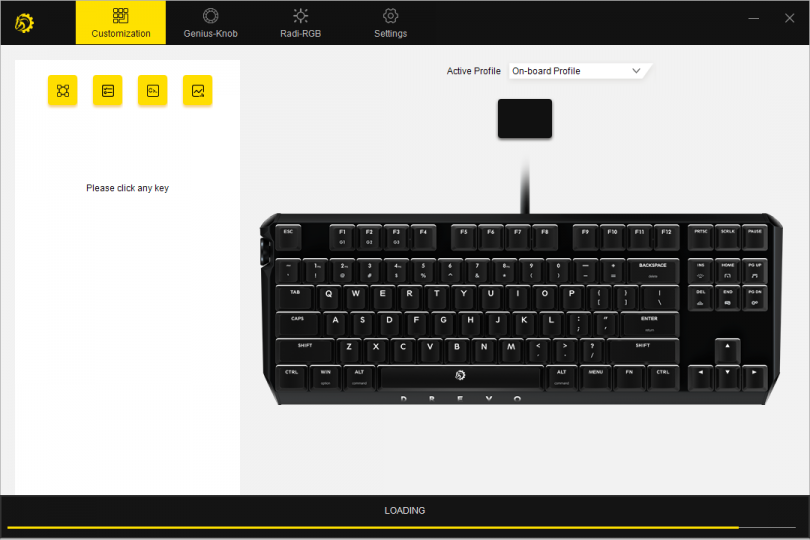 Macros! I’m not an expert here so I will leave it to the more experienced to cover this section. 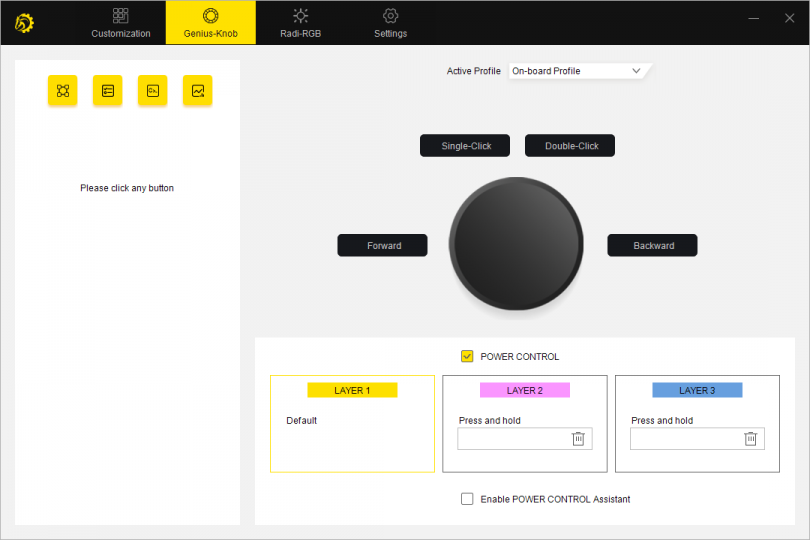 The knob! Customise the function here, and with function keys you can add extra functionality, “layers”, to the knob. As you can see, scrolling it each way can have a different function, as does clicking and double-clicking. 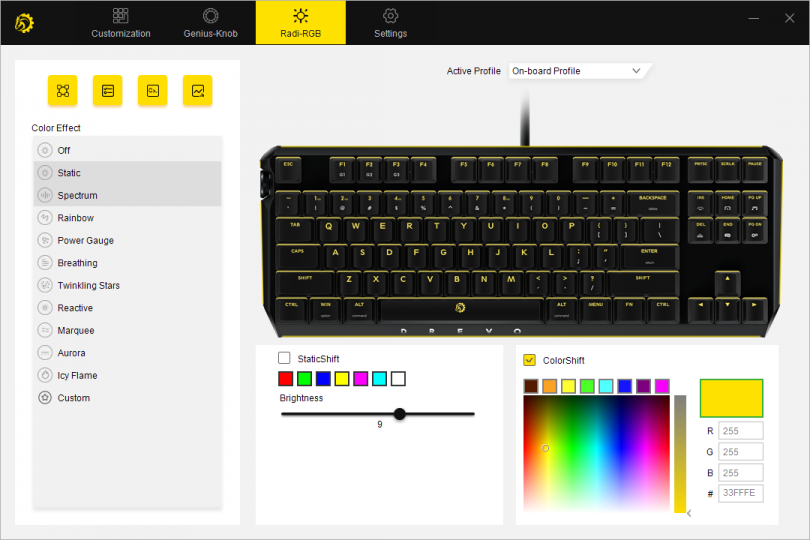 A quick aside – Cherry MX versus Gateron vs Outemu switches. Whilst all the samples of these switches I have sampled have been brown variants, there has been a significant feel difference between them. Both the Drevo boards I have sampled in the past (the Tyrfing V2, and the Calibur) have been outfitted with Outemu Brown switches. My daily driver CoolerMaster Prokeys L Crystal rolls Cherry MX Browns, whilst the Drevo Blademaster on test has been fitted with Gateron Browns.

With a metal frame, quality construction and SFF design, the Drevo BladeMaster is worth a look if you are in the market for a new keyboard. Offering the expected customisation, along with the solid build quality, Drevo has once again defied the price level and proven you don’t need to pay 3 figures for a great mechanical keyboard.

This is the third Drevo keyboard that I have reviewed, and I still highly recommend the products that Drevo  sells – I am yet to be disappointed in their offerings.

This review sample was provided by Drevo. Drevo has provided the following links to their Amazon product pages;

The Pro variant (wireless) will be available in December 2018.