Having already investigated Noctua’s NH-L9a – an ultra-low profile unit designed for AMD sockets – we turn our attention today to the NH-L9x65, a top-down cooler that (comparatively at least) adds some height in exchange for improved acoustic and thermal performance. This 65mm high cooler is claimed by Noctua to be compatible with any motherboard layout that uses the supported sockets, which is good news, given the challenge many have with fitting CPU coolers in most SFF builds. 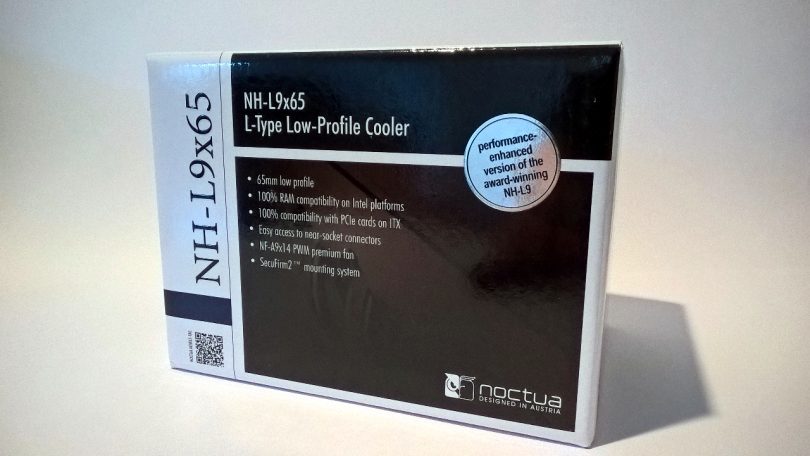 Noctua’s simple packaging makes a repeat appearance here with the NH-L9x65. The graphics are clear, easy to read, and informative, with a bulleted list rounding out the highlights, and a foil sticker reminding us that this cooler is indeed a taller variant of the well-regarded (and award winning!) NH-L9. 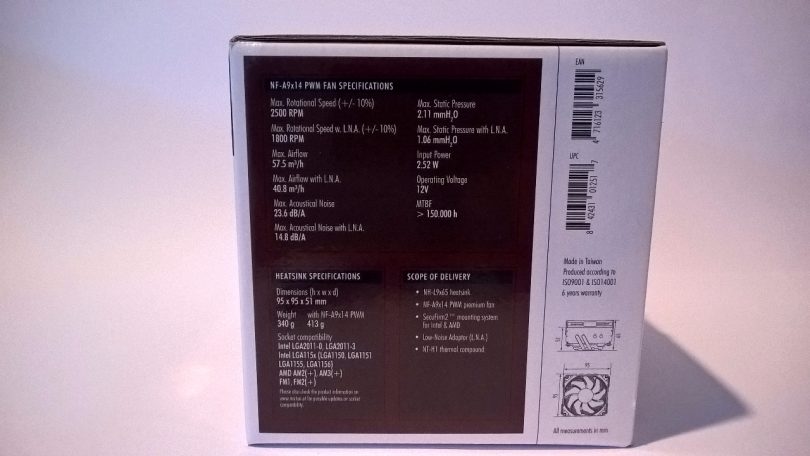 Turing the box clockwise, some specifications and a mechanical drawing can be seen. We noted, however, that the included fan in this cooler is a higher RPM variant of the standalone NH-A9x14 fan – even though this is not mentioned anywhere in the cooler’s documentation, or on Noctua’s website. (We’re not sure why Noctua elected to produce two fans under the same model number, but with different specifications.) 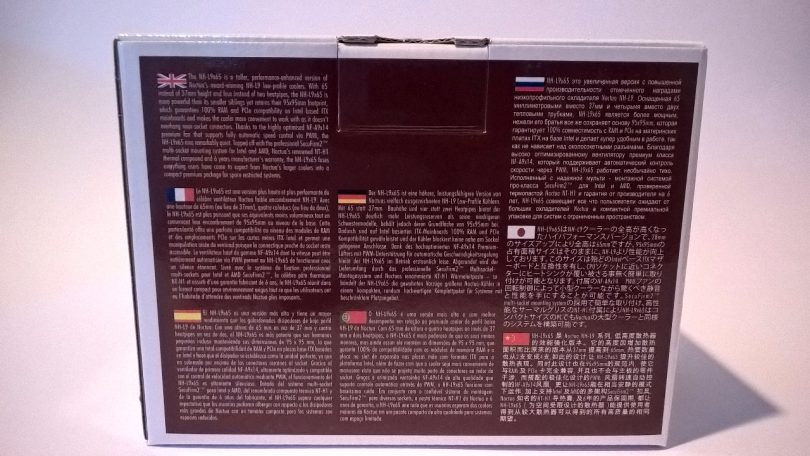 The rear of the box features the usual marketing, but in 8 different languages. 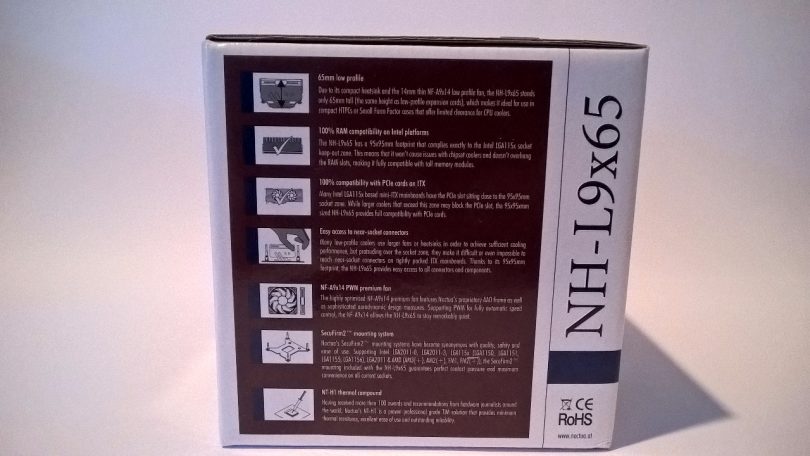 Turning clockwise once more, the remaining side essentially recreates the feature list shown on Noctua’s website. This includes mention of the low profile form factor of the cooler, compatibility with various hardware, and the SecuFirm2 mounting system. 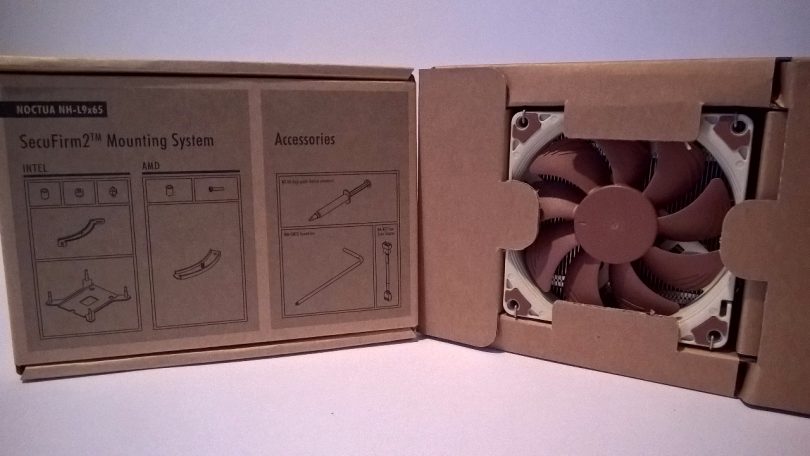 With the outside of the box settled, it’s time to crack this box open! Inside, we find two more boxes – one containing the cooler, and the other holding the accessory kit together. The cooler itself is well packed, held securely, and we found no bent fins or other damage on the heatsink upon opening. 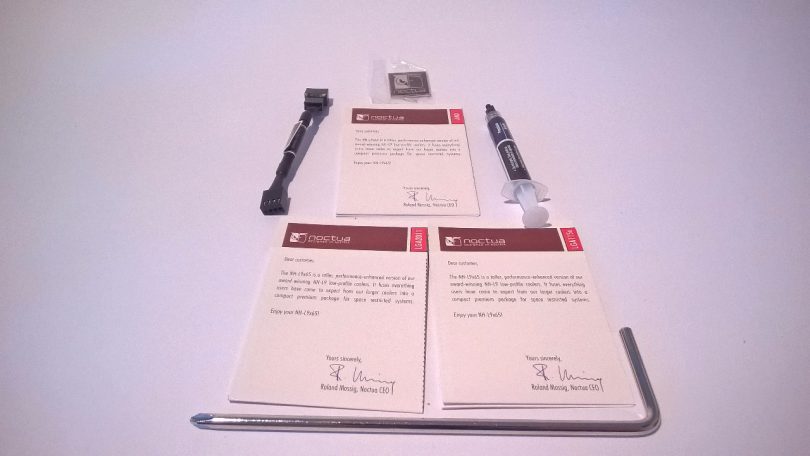 Turning to the accessory kit, we find that it includes a Noctua LNA – a low noise adapter. This is a fan resistor, optionally installed inline by the end user, which reduces the top fan speed to 1800rpm – a 700 rpm decrease from the ‘unlimited’ full speed. This does have the advantage of reducing the noise produced by the fan by around 9dB(a), at least according to Noctua, though obviously thermals at load will increase as well.

Also included is the SecuFirm 2 screw driver, a tube of NT-H1 thermal paste (which is great to see, in comparison to a single application), product manuals, and a shiny metal case badge. 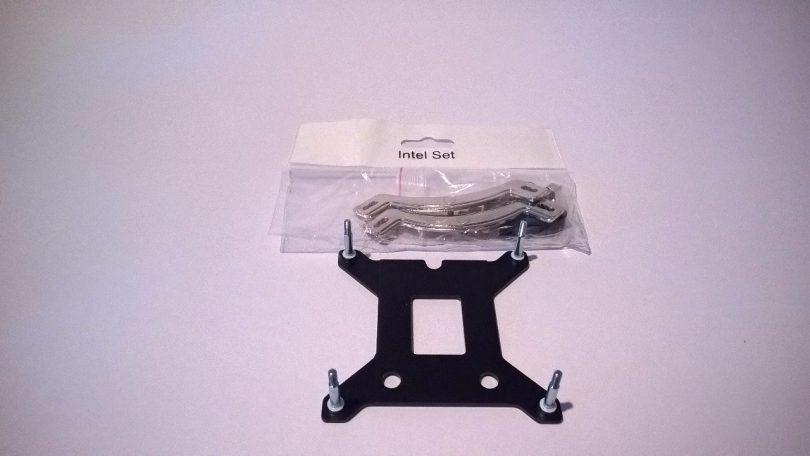 Lastly, of course, we have the mounting system, in the form of Noctua’s SecuFirm 2 mounting kit. Above we see the Intel set, which includes a backplate, and all parts needed. 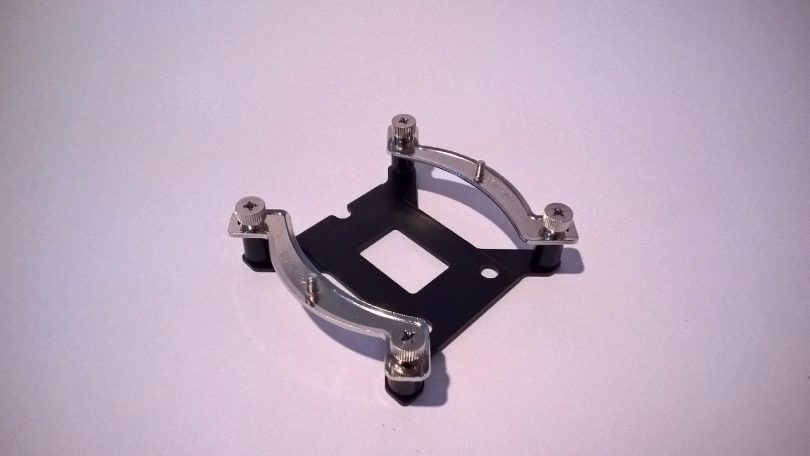 Just to demonstrate what this looks like assembled, we’ve put together the kit above as configured for the LGA 115x socket. The cooler mounts to the two threaded posts centered on the metal arms, using spring loaded screws. 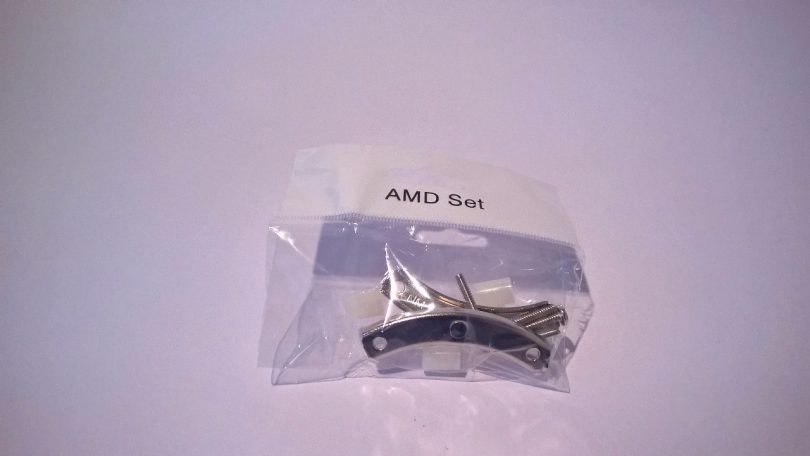 Compared to the Intel hardware, the AMD kit is much smaller – primarily because Noctua doesn’t include a backplate. This isn’t a huge issue, however, since most AMD motherboards come with backplates included anyway. 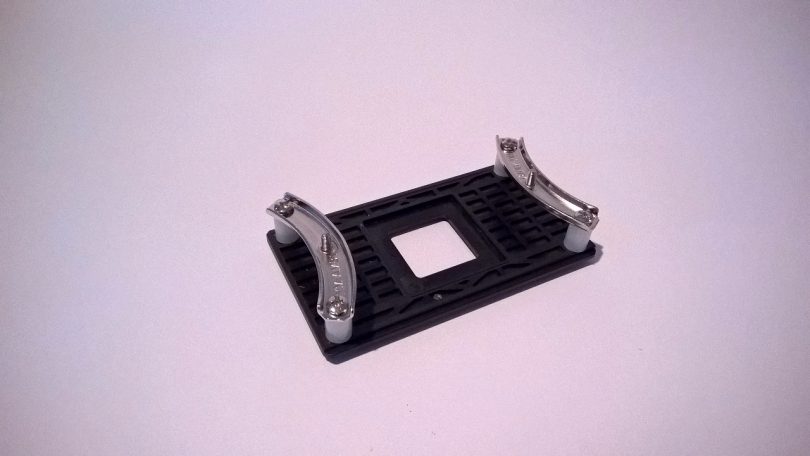 Once more, just to illustrate, we have the AMD kit mounted to an AMD backplate (an aftermarket Thermaltake part). The spacers sit above the motherboard, ensuring accurate mounting height for the cooler. 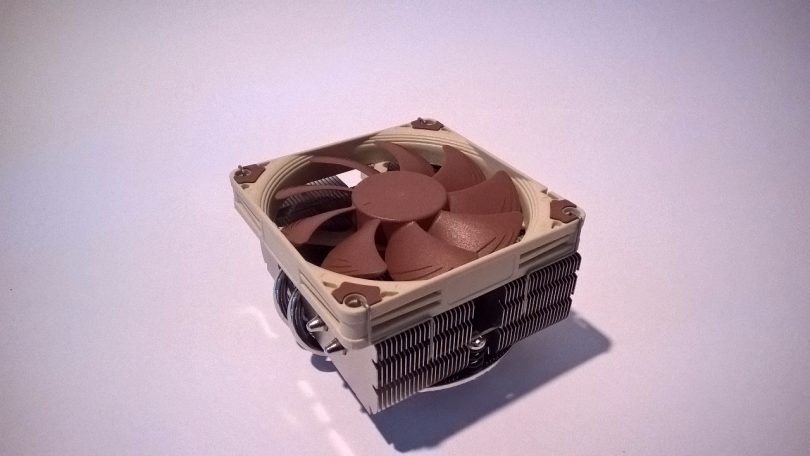 Let’s now take a look at the cooler itself. The Noctua NH-L9x65, as you’d expect, is capped off with the coffee-and-cream-coloured fan that is instantly recognisable as a Noctua product. While some may find this colour scheme to be somewhat off-putting, especially since the colors don’t coordinate easily with other components, I personally find that it adds a ‘premium’ feel to the product – much like the cream leather and polished wood trim inside a Rolls Royce. To each their own, I suppose!

Anyways, the fan itself is held on by two wire clips that hook into the corners. Conveniently, these clips can actually be repurposed to hold a 25mm thick fan if desired, which we suspect many of those with the room to spare will take advantage of. 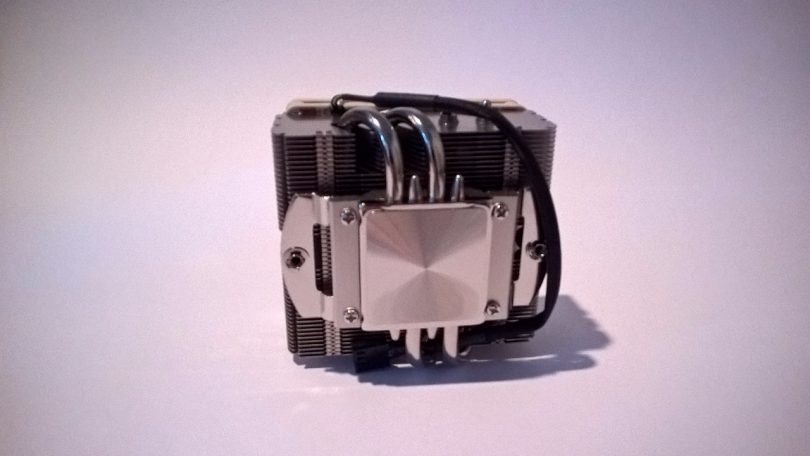 The base of the cooler features a nickel plated copper base plate, with 4 heatpipes channeling through the block. The SecuFirm 2 mounting plate on the heatsink is pre-fitted.

The base for this cooler isn’t polished, and in fact concentric machining can be seen and felt quite easily on the surface. In theory, this may affect cooling performance, since any gaps or irregular surfaces between the CPU heatspreader and cooler base can decrease heat transfer. But we’ll let the results of our thermal analysis act as the last word on this.

Without the fan, you can see the 50 aluminium fins, and the cutouts for accessing the mounting screws. Not a fin is bent or out of place, a testament to how well put together the heatsink is overall. 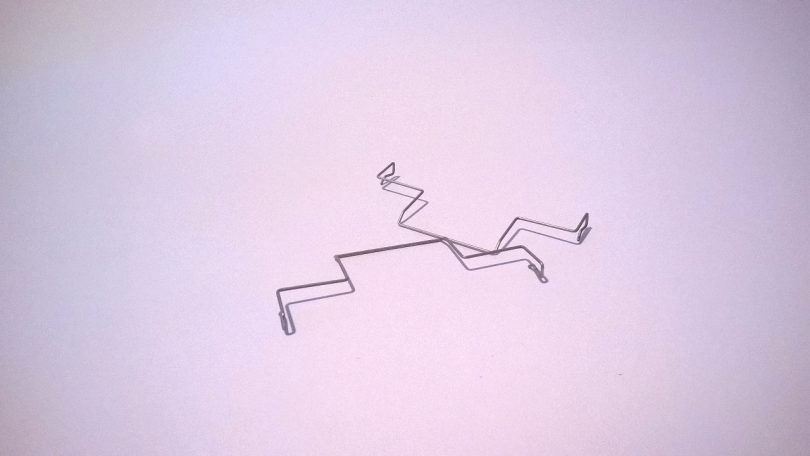 As previously mentioned, the fan mounting clips support both the included 14mm thick fan, as well as standard 25mm fans added after the fact – just note that, when using a thicker fan, the clips slot into the second set of mounting notches along the side of the cooler, to compensate for the added height. 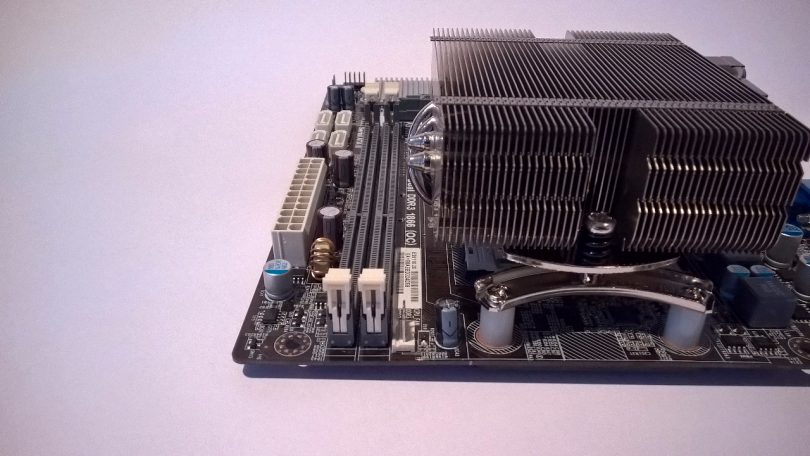 Installation of the cooler was a breeze, and the heatsink was incredibly easy to mount – with or without the fan mounted. On our dummy board, you can see that it doesn’t conflict with any components, since there is reasonable space below the heatsink, and the fins do not protrude over other components. 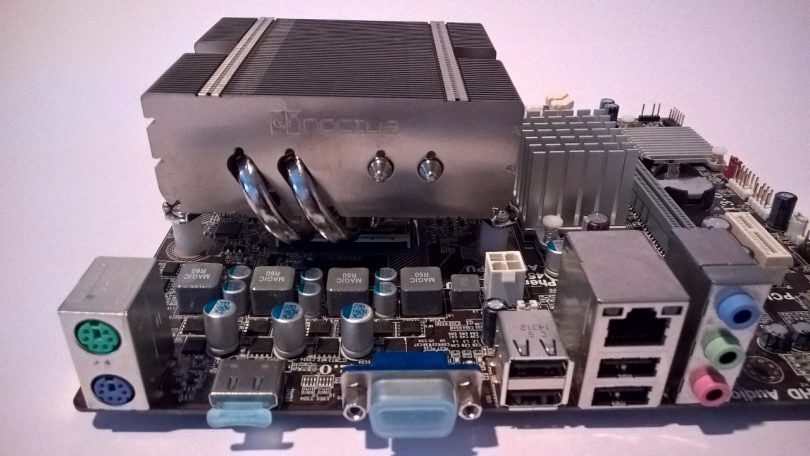 No conflicts here either! 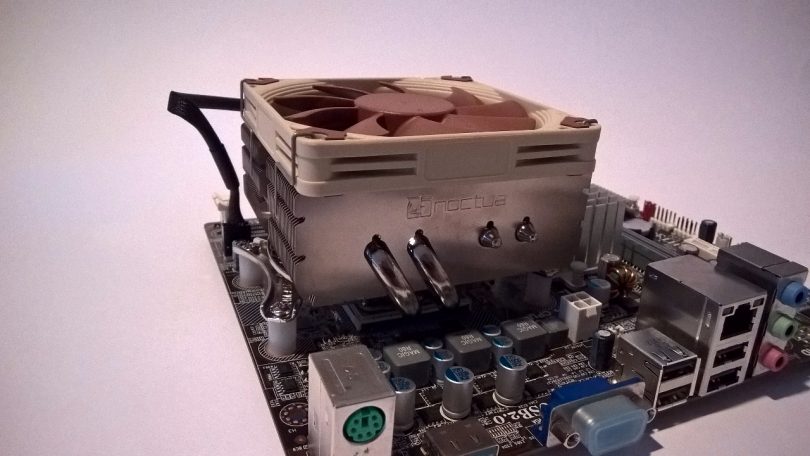 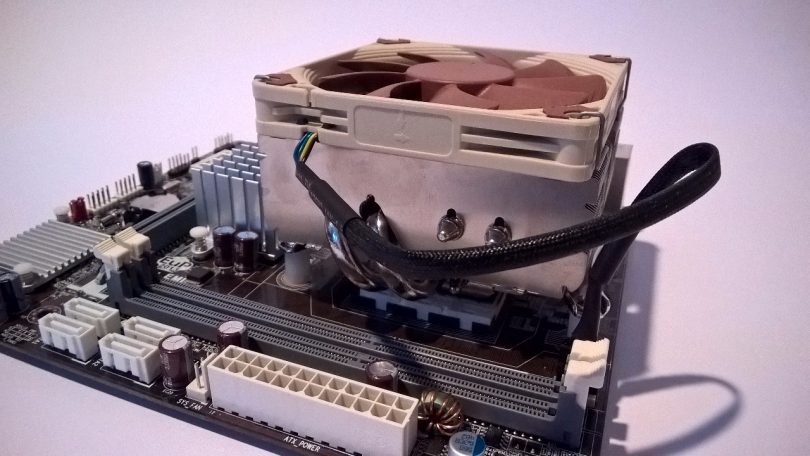 To test this cooler, we relied on relatively simple testing methodologies. Using Deepcool Z3 thermal paste (a budget, but decent performing, paste), we mounted the NH-L9x65 to our 89w AMD Phenom. 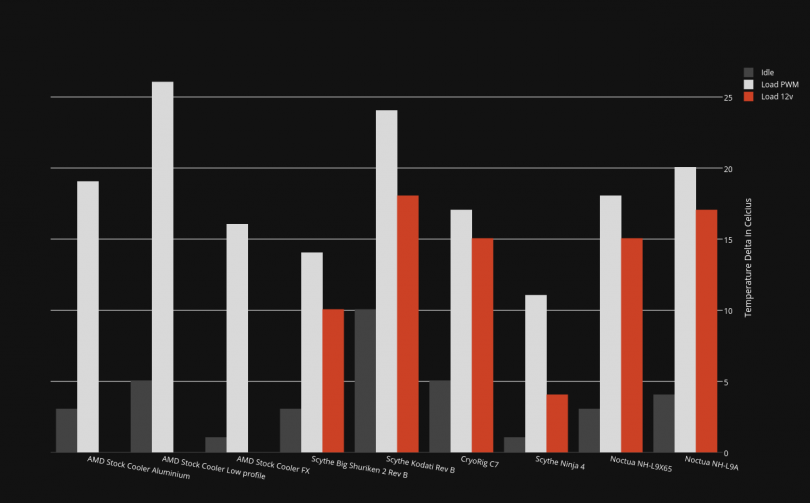 For it’s size, the NH-L9x65 performs admirably – it is at or within striking distance of the CryoRig C7, and is only properly bested by the substantially larger Big Shrunken 2 Rev B by Scythe. Perhaps unsurprisingly, NH-L9x65 easily bests two of the AMD stock coolers (not including the 125w rated FX cooler) and out-performs the Scythe Kodati Rev B.

During testing, the fan was never ‘loud’, and the sound signature was always pleasing and non-obtrusive. Unless noise is a primary concern, Noctua’s LNA (and its performance penalty) is an easy accessory to forgo.

The Noctua NH-L9x65 is a quiet, well-built and elegantly-designed cooler for the majority of today’s sockets. With no motherboard compatibility issues to be found, this cooler will make a serious contender when selecting heatsinks for your next build.

The SecuFirm 2 mounting system is easily the best aftermarket mounting system available that I have experienced, second only to the almost universal (on AMD platforms that is) AMD retention clips mechanism for ease of installation. It is also compatible with numerous other Noctua coolers, making any future heatsink changes even easier if you stay with Noctua products.

Some may dislike the colour scheme of the fan

Machined base may not be optimal in terms of performance.

This cooler is currently available for around US$49.95 on Amazon.com

Noctua’s Jakob Dellinger responds to our question about the fan specification discrepancies:

[mks_pullquote align=”left” width=”800″ size=”18″ bg_color=”#000000″ txt_color=”#ffffff”]The reason why we have decided to use a slower maximum speed for the retail variant of the NF-A9x14 is that many customers use it in areas other than CPU cooling where higher speeds are not required and there may be no option to slow down the fan via PWM. For the CPU coolers, on the other hand, PWM is usually available and we wanted to provide some extra performance headroom for hotter CPUs or environments.[/mks_pullquote]